The Western League of Professional Baseball Clubs, simply called the Western League, was a minor league baseball league originally founded on February 11, 1885, and focused in the Midwest. 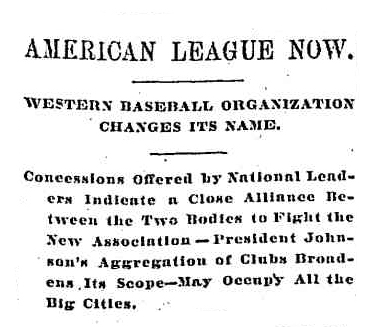 The Western league has gone out of existence and in its place is the American League of Professional Baseball clubs.

Such was the decision arrived yesterday at the annual fall meeting of the organization at the Great Northern Hotel. The change of name was agreed upon almost unanimously. The presence of Buffalo, and even Indianapolis, in the circuit was given as sufficient cause for the change, but there was probably more than that behind it. The Western league (formed February 11, 1885) has been growing for years, in ambition as well as influence, and wanted a bigger name.

There has always been an element in the body which believed the organization should assume rivalry with the National league. More conservative members have restrained this spirit, believing baseball war meant destruction to both sides; but the league has nevertheless progressed and the national name now taken indicates that the men in control believe it has advanced at least beyond sectional lines.

Another design, probably, is to head off the new league, and in the direction the Westerners undoubtedly have the sympathy and support of the National league moguls. Other things done at yesterday’s conference indicate that the Western league baseball men are profiting by the situation to boost their own organization. The National league is anxious to block the new league and is quite willing to help the Western league along in order to do it.

President Johnson was instructed to draw up an appeal to the National Board of Arbitration to modify the national agreement in two vital particulars. These are to permit of two players remaining in the Western league two seasons before they become subject to draft, and also increasing its drafting price from $500 to $1,000.

Brush Takes a Hand.
These are the identical things asked for by the Western league at the Philadelphia meeting of the National league two years ago, and at that time summarily rejected. But now things are different. Magnate Brush is himself responsible for the removal of this proposition from the Western body, and Mr. Brush was the leader in the opposition to granting it two years ago. Mr. Brush hasn’t changed without a purpose, and that purpose is to thoroughly placate the Western league and make a close alliance between it and the National league in this hour of threatened invasion. Mr. Brush summoned President Johnson to Inaianapolis a short time ago, and the proposed changes in the national agreement is the outcome.

There is little question what the outcome will be. The American league will be able to keep players two years, and the National will have to pay $1,000 for every player it drafts.

Whatever was done in reference to a change in the circuit was not given out. It is gossip that Tom Loftus will bring his Grand Rapids plant to Chicago, and that Comiskey will switch his St. Paul club to either Louisville or Cleveland. President Johnson was authorized to draw up next season’s schedule and the schedule meeting will be held in Chicago March 14, after the spring meeting of the National league. It seems clear the National and old Western leagues have planned to ally forces and occupy all the desirable cities with their baseball clubs.

Routine Business Finished.
Routine business such as awarding the pennant to Indianapolis and dividing up the season’s sinking fund was attended to. Minneapolis made the most money on the season, then followed Kansas City, Indianapolis, Milwaukee, Detroit, Buffalo, Columbus-Grand Rapids, and St. Paul in the order named.

Detroit, Indianapolis, Kansas City, and Minneapolis compose the new Board of Directors.

Those at the meeting besides President B. B. Johnson and Secretary W. R. Johnson were:

The league adopted resolutions of respect to the memory of Loftus’ business partner, Arthur O’Malley, who was part owner of the Grand Rapids club.

The league will hold another session this forenoon. 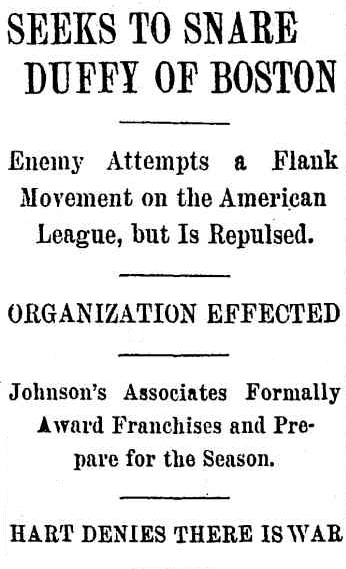 The National league or the American association (league) just missed pulling off a sensational coup at the meeting of the American league, which reorganized itself into a new eight-team circuit yesterday at the Grand Pacific Hotel.

It was nothing less than the kidnapping of Hughey Duffy, one of the young league’s best playing cards, and either holding him for a big ransom or buying him back into the ranks of the National league and American association. It looked more like an attempted abduction, however, and was modeled after the recent Omaha affair of the dame kind. It miscarried only because Mr. Duffy is something over 7.

The Milwaukee end of the association was elected to do the trick, and Messrs. Quin and Havenor came to town on an early morning train. At the station they were met by a man, who later appeared at the Grand Pacific and asked for Mr. Duffy. The clerk pointed him out, and the rest can be best told in Duffy’s words:

I took him for a newspaper man when he gave me his name, and asked if there was anything in particular doing just then, so I told him there wasn’t much. Then he said he wanted a talk with me, and suggested a short walk. I replied that I had to stay there, as the league was in session then. He said he had a proposition to make to me, and he as he had a tea store near by we had better walk over there. I told him he would have to say what he had to say there. Then he informed me he was interested in the associations’s park at Milwaukee with Mr. Quin, and they were willing to make me a good offer. Before he got any further I told him my opinion of his partners, and that if those four-flushers up there should offer me $100,000 cash in hand I wouldn’t have anything to do with them. I said a few more things, and he remarked that he admired my spirit, and walked out of the hitel.

Now I am wondering what they expected to do, and imagine they must have had a cab and some chloroform around the corner somewhere, with Quin and Havenor waiting. That’s the only way they could have got me.

This bold move on the part of the appendix league created only amusement among the American league magnates, and Duffy was the butt of a lot of good-natured jokes. The only serious comment made upon it was that it showed in what desperate straits the association was to attempt such a thing.

Award the New Franchises.
The American league itself got itself down to business shortly after noon, and with a brief adjournment for lunch remained in session until late in the evening, and in that time accomplished practically all that it was possible to do at this meeting, it being the wish of the Baltimore magnates to return home as soon as possible. A new circuit was adopted as laid out by the Circuit committee, the clubs in Baltimore, Philadelphia, and Boston were admitted, and Indianapolis, Buffalo, and Minneapolis were dropped. Manning’s Kansas City franchise having been transferred to Washington at a previous meeting.

The new franchises were awarded as follows:

The magnates therefore in no way disclosed their hands in so far as the backing in Philadelphia and Boston is concerned, and declined to dispose it, merely saying they had it. It is certain that Mr. Somers will not move to Boston to head the club there, nor is it likely he will back the club there. The franchise has evidently been awarded him as proxy for the real owners. 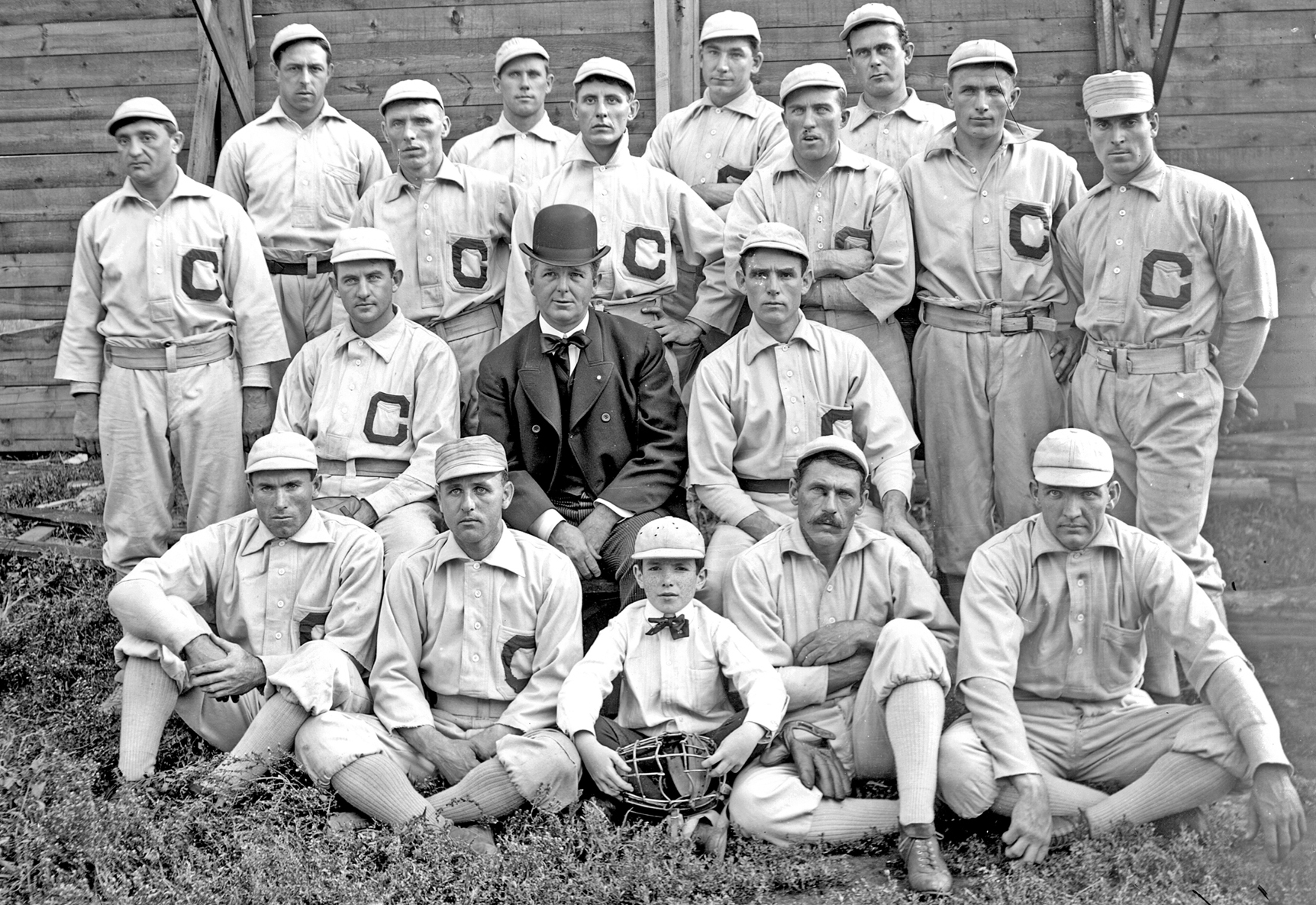 The Chicago White Sox began as the minor league Sioux City Cornhuskers and played in the Western League. The WL reorganized itself in November 1893, with Ban Johnson as President. Johnson, a Cincinnati-based reporter, had been recommended by his friend Charles Comiskey, former major league star with the St. Louis Browns in the 1880s, who was then managing the Cincinnati Reds. After the 1894 season, when Comiskey’s contract with the Reds was up, he decided to take his chances at ownership. He bought the Sioux City team and transferred it to Saint Paul, Minnesota, where it enjoyed some success over the next five seasons.

In 1900, the Western League changed its name to the American League. It was still officially a minor league, subject to the governing National Agreement and an underling of the National League. The NL actually gave permission to the AL to put a team in Chicago, provided they not use the city name in the team’s branding. Comiskey moved his St. Paul club to the Near South Side and renamed it the White Stockings, grabbing a nickname that had once been used by the Chicago Cubs. The White Stockings won the 1900 American League pennant led by player-manager Dick Padden,[1][2] the final WL/AL championship season as a minor league. After the season, the AL declined to renew its membership in the National Agreement and declared itself a major league. 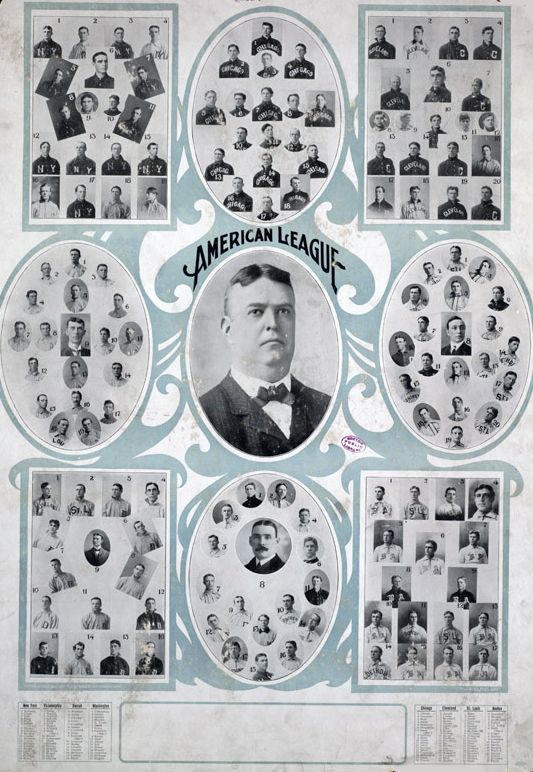