NEW YORK, Oct. 10.— One round dimmed the luster of Cicotte’s so-called shine ball and the Giants beat him 2 to 0 in the third game of the series. The Polo grounders came back to life and with Rube Benton absolutely unbeatable the White Sox had no show in a battle that was even better than the first one fought in Chicago. The series now stands 2 to 1 in the White Sox’ favor. A crowd of 33,777 paid $73,403 to see the Giants come back to life.

The same Sox that cleaned a quartet of pitchers for 14 blows in the Sunday combat got five off Benton and two of them were of the itchy kind, meaning scratches. Cicotte was bumped eight times and three of them bunched in the fourth brought home the side meat, which is now worth 60 cents per pound, retail. From this it will be seen the Giants got something worth while.

New York Mayor Mitchell walking onto the field escorted by Police as he is going to throw out the first pitch.

CICOTTE IN ERROR; FANS FIRST MAN UP.
Cicotte fanned the first man up, and under the rules of civilized baseball he was doomed to lose. The chunky little pitcher whiffed eight men all told, but that did not wipe out the fatal hoodoo following the fanning of Burns in the opening round. One triple, a double and a single in the fourth produced the two runs. Soon after these two long blows Umpire Klem threw out an alleged shine ball. If Cicotte was pitching a shiner, why did Robertson and Holke knock the hits for extra bases? Then, with a pill so new it glistened in the sunlight, Burns bumped an infield hit and the second tally came in.

There may be nothing but superstition in the shine ball, and if so the Giants were not that way in this combat. They outhit the Sox and outplayed them so far as the error column shows, though not one of the
boots cost anything. The Giants simply rose up in the fourth, bumped a small cluster of fairly large,swats, and that settled it. Aside from the batting end the pitchers were remarkable in that neither walked a batsman. Control was the long suit of Benton and Cicotte. 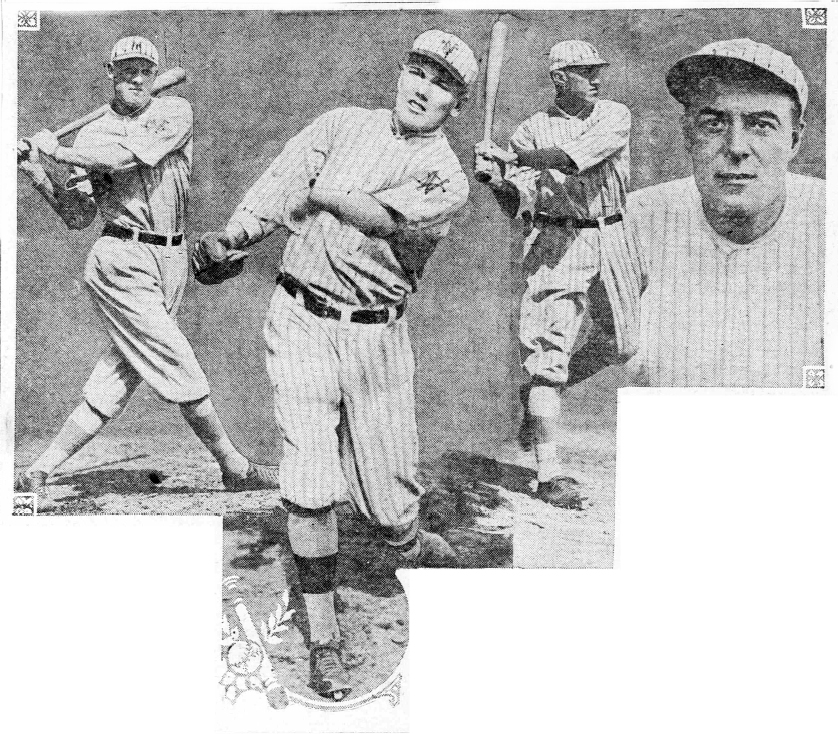 Walter Holke, who hit in Robertson with the first run, is shown at the extreme left. Next comes J. C. (Rube) Benton, the pitching hero. Thenis seen Davy Robertson, whose hitting and fielding wonfor the Giants. Finally there is George Burns, whose hit scored Holke with the second tally.

ROBERTSON KILLS OFF BEST SOX CHANCE
The best chance offered the Sox was killed by Robertson in the first of the fourth. At that it was a close shave for the Giants. With Felsch on first and two out Gandil drove a mighty wallop to right. Robertson bumped the advertising sign of a $1 safety razor painted on the concrete wall and rebounded with the ball in his hands.

The usual preliminaries thrilled a crowd of 33,700 basking in the sunlight of a perfect afternoon. The same stunts shown at home were pulled off here with the exception of the orator who had a hemorrhage in
a megaphone at the plate. They flagged him here. Bill Klem said he would do it, and he did. Bill was the Grand Super Ump behind the platter.

Three persons of more than distinguished honors flashed themselves in the gasping throng. Mayor Mitchel marched up the field leading a platoon of police. The cops were his bodyguard. Soon after that Gerry Herrmann came in wearing a loose muffler around his throat. His neck got jammed in a midnight railroad wreck on the way here. Any man who buys $3,000 worth of wine per hour cannot afford to have his pipes impeded by so much as a collar button. We trust this will explain Mr. Herrmann’s dishabille or. a gala occasion.

John McGraw Was a Dub Yesterday Morning, a Hero This Morning; He Has Been in World’s Series During 12 Years’ Time 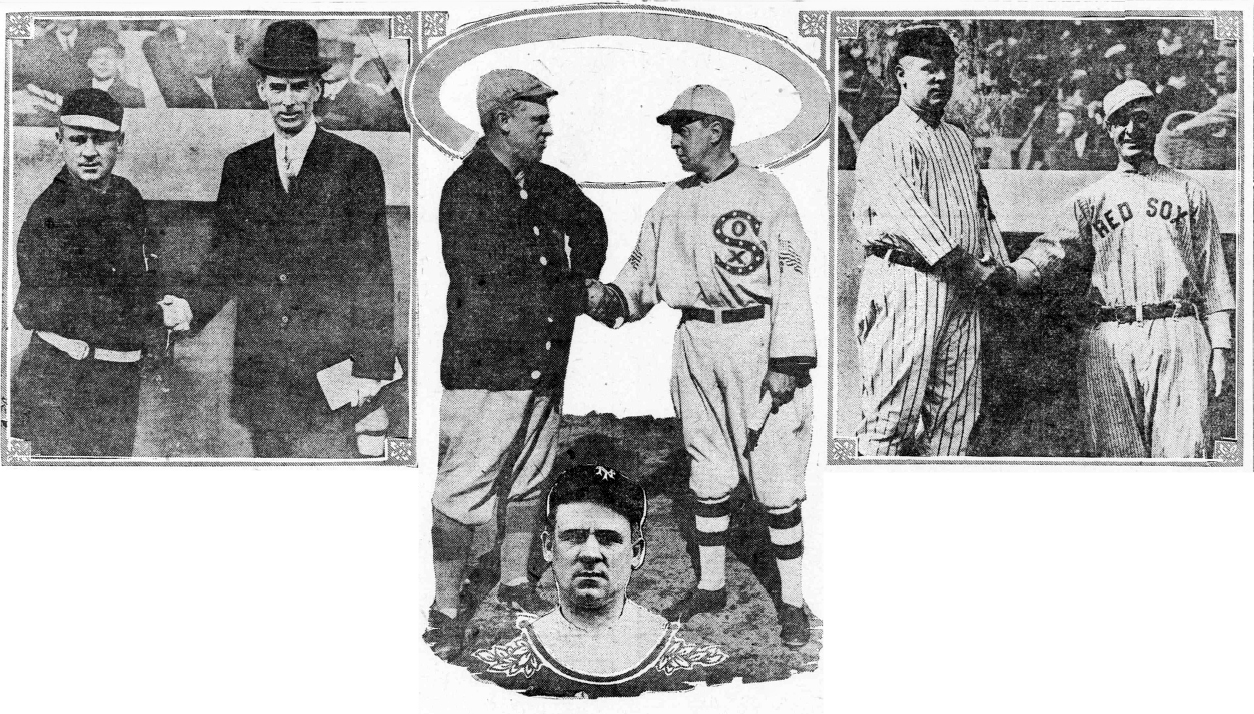 At the left McGraw is shown shaking hands with Manager Connie Mack before the first Giants-Athletics world’s seriesin 1905, at the right with Jake Stahl of the Red Sox before the in first big series game in 1912 and in the center with Clarence Rowland of the White Sox before the initial pastime this Fall. McGraw is at the left in all three pictures. Below in the little panel in the center is shown the fighting face of McGraw. He will battle to the bitter end in the present struggle and his club is far from being beatenyet. “Muggsy” is a world’s series veteran, as the pictures indicate,and a dangerous foe.

BAN JOHNSON HERO OF DAY.
President Ban Johnson was the hero of the day and the crowd acclaimed him as such. In an evening
paper interview Ban said that he would enlist in the United States army as a private as soon as the series ended and would be fighting the Kaiser in six weeks. If they won’t take him in the light artillery, where he wishes to serve, Ban might go as an armored tank.

Somebody woke up overnight and revamped the Polo Grounds automat or cafeteria press coop mentioned in
our dispatch last night. Comfortable writing shelves were placed in the opera chair section roped off for the overflow Deans. Imagine a fat Dean with no elbow room balancing a Corona on a blue blottingpad on his knees and playing it by the touch system beneath the overhang of his stomach? It can’t be done. One more tribute to the power of the press.

In the winning fourth round Robertson struck a triple to right. Holke shot a low liner to left. Shano Collins sped forward for the ball, which hopped away for two bases. Robertson counted. Rariden sacrificed Holke to third and Benton fanned. While Burns was up Klem took away the ball Cicotte was using and tossed it into the local dugout. Burns then bumped a hopper along the third base line. The hitter had the blow beaten, and Holke was home when Cicotte picked up the ball and gave Burns an extra base with a wild peg past first base. Herzog hoisted a tall foul, which Gandil caught in one hand while standing on the rolled-up ground canvas placed against the stand.

In the eighth Weaver led with a Texas league two-bagger over short. Schalk hit to Benton, and he carried the ball to Weaver and tagged him in a rundown between second and third. Cicotte struck out and Rariden doubled Schalk trying to steal on the final swing.

Ed Collins scratched a hit after two gone in the ninth. The bleacher bugs spilled into the field as Jackson popped a short. 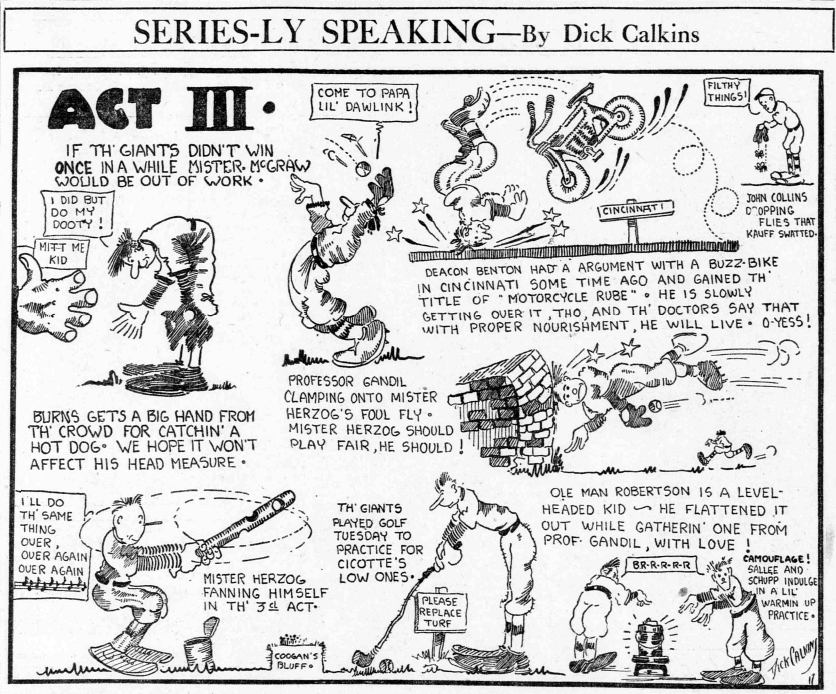 Both teams appeared in white uniforms. The only distinguishing color was the blue caps of the Sox. They won two games in white, and it would be unlucky to wear the gray road suits.

Sammies in France Bet on Sox to Win
AMERICAN FIELD HEADQUARTERS IN FRANCE, Oct. 10
—Any Giant rooter can get 1 to 4 odds on Chicago winning if he’ll come over here. That betting became the rule after Pershing’s fighters read bulletins of Sunday’s Chicago victory for the White Sox. Many soldiers walked for blocks in the third day of a drenching rain to rend the world’s series bulletins. Groups stood in the downpour to wonder how the Sox did it.

The official figures announced by the National Commission for the third world’s series game and the totals for three games follow:

The National Commission receives 10 per cent of the gross receipts of each same. Players receive 60 per cent of the balance left of (he first four games played. The clubs divide the remainder