Zim Chases a Run Over

By Charles Dryden.
NEW YORK, Oct. 15.— A ninety-foot sprint by the Great Zim chased the 1917 championship of the ivory domo (or world’s baseball) series and the bulky end of the purse into the waiting pockets of the White Sox. Score, 4 to 2. We point with pride to the prediction that the coin would carry the Sox to the place they wished to go. They arrived to-day in the early part of the first dog watch. Figure that out for yourselves if versed in language nautical. We are going fishing and do not care to monkey with statistics.

In the fourth round, which has developed most of the dope in the ivory dome series, the Sox put over three runs on Rube Benton and the southpaw led his goat a funeral march to the clubhouse. The Sox batted a tally across with P. Perritt on the slab in the ninth. Red Faber started and finished and enjoys the honor of three victories in four. Two walks issued by Red and ilerzogs triple counted the pair of markers in the fifth.

GIANTS CRACK LIKE AN EGG.
The Giants cracked like a 1910 egg in the fourth and ruined the rest of the afternoon for Benton. One hit, two errors, the immortal ninety foot sprint by Heine Zim and a flock of boners, inexcusable in a bush league, landed the Sox out in front to stay.

To pave the way to his private cinder track, Zim picked up a sharp bounder from lid Collins in the fourth and pegged low to llolke. Having consideration for the bumped ear of that suffering athlete, Heine fired at Holkes noble feet and Collins took two bases. Joe Jackson poked up a soft boiled fly to right. Dave Robertson camped under the ball and made a $30,000 muff, which sum represents the difference between the ends of the purse. Dave was standing flat footed when the pill came down and so was lid Collins. The runner raced to third, Jackson remained at first and both Kox waited to see what the Giants would do next. Thirty-three thousand odd Polo Grounders likewise sat tight and swallowed the lumps in their necks.

Wheelbarrow and a Giant Fan’s Folly 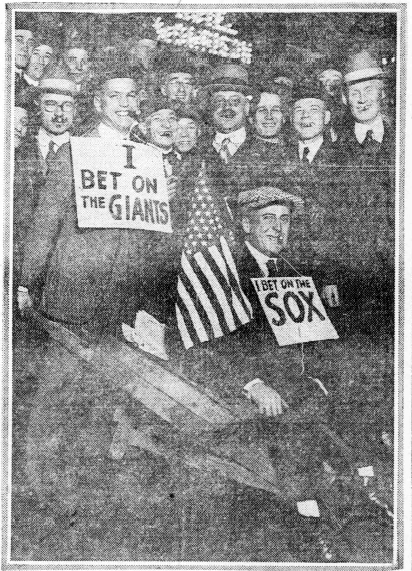 Pat Piper, groundkeeper at the Cubs’ Park, is a National League fan. Percy Curtis of the firm of Bentley & Murray, printers of the official scorecard, is loyal to the Sox. As result of backing up their oponions with a wager Pat had to wheel Percy around the loop last night in a wheelbarrow and incidentally “cough up” about $100. Hundreds saw the start of the parade in front of the Morrison Hotel.

BENTON’S BRAIN REVERSED.
Zim’s bum heave reversed Benton’s mental machinery and the muff in right placed his goat on the scratch for the next crack of the pistol. At least that was the general opinion among the experts and deans. It surely did look cloudy for the Giants with Sox on third and first and none out.

Benton was not buffaloed by these misfortunes. When Hap Felsch tapped a hump-backed liner to the slab Rube grabbed the ball and ran toward third, driving Collins back to that station. Bill Rariden moved half way from the plate to third. Benton stuck around in that vicinity and Mr. Holke stood rooted to his favorite spot—first base. With the pill in fail hand Zim approached Collins, who ducked past Rariden and sped for the vacant rubber with Heine camping on his trail like a houn’ dog in pursuit of a John rabbit.

No Sprinter, but Some Hurdler, Is Heine Zimmerman

This picture, taken at the final game of the world’s series in New York, shows the finish of Zimmerman’s fruitless chase of Eddie Collns to the home plate in the fourth inning Monday. Collins has slid into the plate and Zim is hurdling over him. Zim has been made the “goat” for this play. NEVERTHELESS the picture plainly shows that Heine had to chase Collins. There is nobody near the plate to whomhe could have thrown the ball. Catcher Rariden is shown standing on the third base line. He appears to be looking at Pitcher Benton and First Baseman Holke and wondering why one of them did not protect the home station. Those in the picture are (1) Rariden, (2) Umpire Klem, (3) Collins, (4) Zim.

HEINE LOSES FOOT RACE.
The bugs stood up and watched the race with bated and also baited breath. Zim, like Collins, is a college man. He took a course in sprinting at Harvard ’06, but never told it to a soul except a female hair dresser at Jacksonville, Fla. Beware the female of the species. She is more deadly than the male. Anyhow, the Giants fell back and gave the sprinters a clear field. Collins was the faster. He was sprinting for his whack of the $30,000 and so was Heine. The pride of the Bronx needs it worse than the other sprinter, who has some already. Collins had the jump and he won the $30,000 classic, sliding over the rubber on the rear platform of his pantaloons with Heine almost touching him with the ball. Heine had been doing that for the last sixty feet of the race.

Jackson reached third and Felsch second during the congress of the race. They missed it altogether, but were somewhat compensated when Gandil whacked a single to right scoring two more tallies. Gandil thought he was a sprinter, too. and tried for second in his slow, methodical way. Robertson retrieved the ball and heaved Chick out at second. Chick had done his part. The game was safe, and the Giants knew it. Three runs in and but one man out. Weaver skied to left, Schalk singled and Faber walked. J. Collins ended the inning by grounding out to Fletcher, and the grandest round ever seen in a series came to an untimely end. 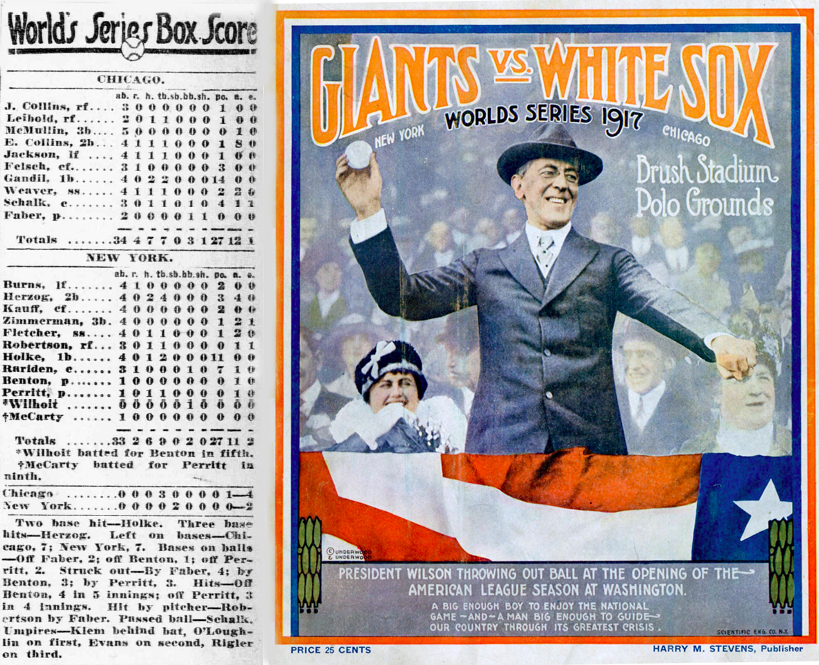 RUBE BACK PROM MATTEAWAN.
Benton relumed from Matteawan whither the Giants had driven him, and retired three Sox in a row in the fifth. In the last half Faber fanned Holke and walked Hariden and Joe Wilhoit, the latter hitting- for Benton. Burns forced Wilhoit and Herzog slammed a hot one against the concrete wall in right. The slam was so hot Shano Collins couldn’t pick it up for quite a while. Hariden and Burns counted, and Shano pegged the cooled off ball to third, but Herzog was there, sitting on the back to cool off. Kauff fouled to Gandil.

In the remaining rounds the locals got two hits, both singles, and Faber burned Robertson on the wrist with a pitched ball to open the ninth. The Giants were done, and that start availed nothing. Neither Kauff nor Zim got a hit. After the race Heine was so downhearted he dogged his grounders and refused to run them out.

Perritt pitched in-and-out ball in his four frames. In the ninth singles by Weaver and Leibold, Faber’s sacrifice and Kauff’s fumble of Leibold’s hit sent in the last run. which was entirely superfluous if not nauseating to the Giants. 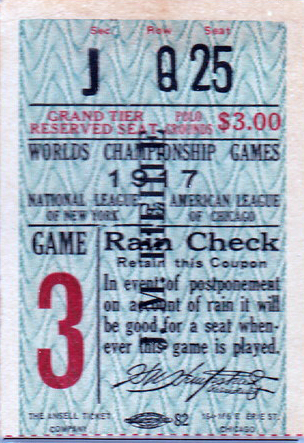 Yesterday’s victory of the White Sox brought another title to Chicago that of world’s baseball champion. Hugh S. Fullerton, whose, articles have been a regular in the Chicago Examiner, has earned the title of the “world’s champion baseball doper.” Listen to this list of accomplishments:

The first games in the 1917 season were played, Fullerton picked the White Sox to win the American League, pennant and New York to do likewise in the National. No baseball fan need to be told how accurate these predictions were.

He said the world’s series would result in a victory for the White Sox. four games to two. It did.

He said Sallee and Russell would be the pitching goats of the series, he was right.

He said the Giants would get one run and seven hits off Cicotte in the first game. He was right.

He said Saturday’s game would be slugfest and Sallee would be
chased before it was over. Right again.

He said the Sox would score their winning runs in yesterday’s game on errors. Ask Zim, he knows.

Now maybe Hughie can tell us when the war will end.