NEW YORK, Oct. 11.— A canvas covered home run by none other than the much reviled B. Kauff cracked the enamel on Red Faber and the whole Sox machine sort of crumpled on the stingy end of a 5 to 0 score in the fourth battle of the series.

Before the curtain went down on the mournful scene, B. Kauff banged another homer with a bloke on the
towpath and this completed the rout of the Sox. The classic is gummed at two to two, which sounds like a locomotive whistle, and means that the Sox must employ the locomotive a second time to bring them back to this inhospitable place.

All dope on a short series is subject to revision and the gents with the hop needles are already on the job.

Ferdy Schupp, the southpaw who suffered a relapse in the second contest, came back so strong that only
one Sox reached third base and he was the first to explore that unknown territory in the two days here. The Giants permitted Ed Collins to swipe that bag in the ninth as one run would make no difference.

Broadway “Goats” for Days, but Idols This Morning 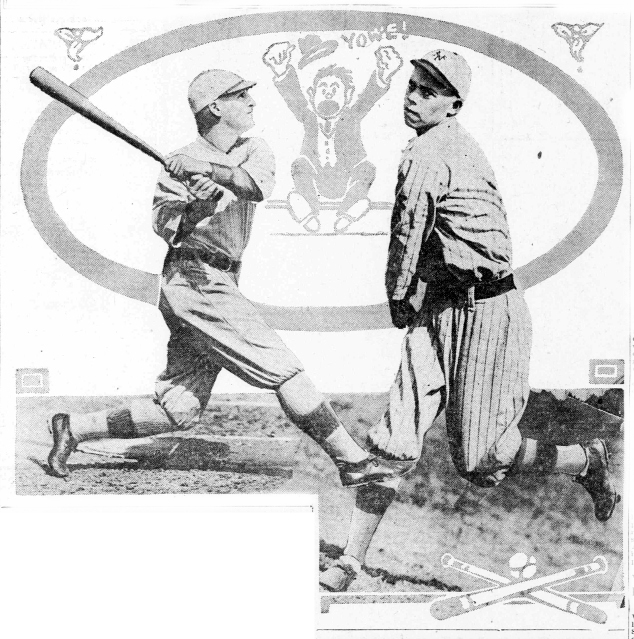 Here are the two Giants who beat the Sox yesterday. Benny Kauff, the author of two home runs, is shown at the left. The other is Ferdinand De Soto Schupp, who shut out the Sox after they had batted him out of the box here in Chicago Sunday. Kauff’s first homer yesterday was his initial hit of the series. Photos by International.

EDDIE COLLINS CAUGHT OFF SECOND BY SCHUPP.
In the first of the fourth Schupp nipped Ed Collins off second after the author-player had opened the
round with a bright two bagger. That was the turning point, so the experts said. It may be true, as Kauff turned right round in the last of that inning and knocked his canvas-covered home run. That blow might be termed another turning point.

Schupp allowed seven hits, or the Sox took that many, while the Giants pecked Faber and Dave Danforth for ten, including the two Kauff homers and a triple by the Great Zim. When all the dead come to life at once there is no hope for the Sox. Three runs and seven of the hits were made off Faber. A pinch hitter displaced Faber in the eighth and Dave Danforth, the portside prince of the bullpen, essayed
to clear away the wreckage. Dave has been a dandy artist in that line, but Kauff was running wild with his bat and there was no hope lor the southpaw.

First Pictures in Chicago of the Third World’s Series Game, Played Between White Sox and Giants in New York Wednesday

At the left Benny Kauff is shown sliding safely into second base when John Collins muffed his fly ball to left field in the first inning. The arrow in the picture points to Kauff. In the center Manager Clarence Rowland and his daughter, Beulah, are posing for the camera man before the game. Rowland and the Sox are wearing dark caps with their white uniforms in New York. At the right Buck Weaver is shown stealing second base in the second inning. The arrows in the picture point to Weaver and the ball. Fletcher is shown on the ground also. He dropped the throw from Catcher Rariden of the Giants. Weaver singled before stealing. Photos by International 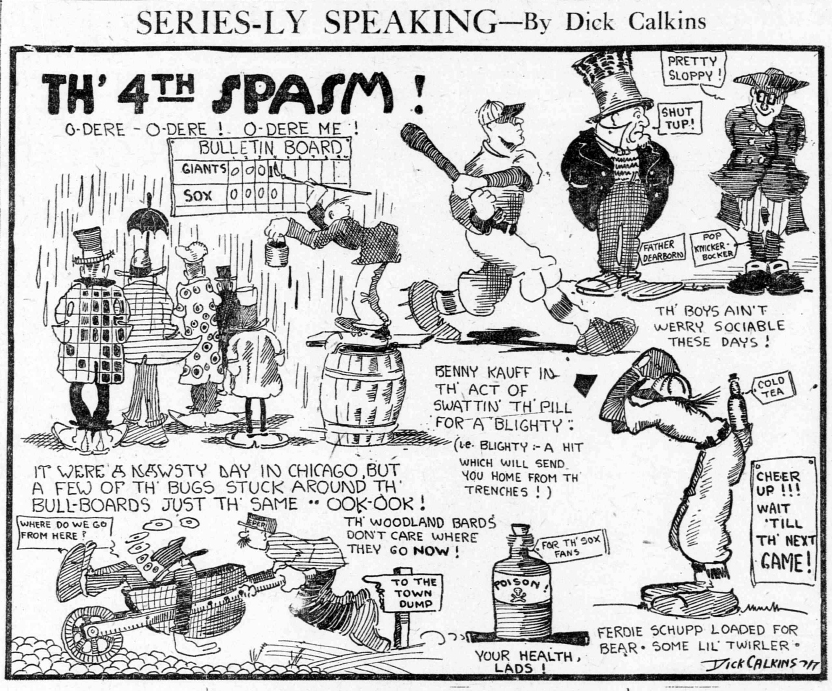 KAUFFS FIRST HOMER “CANVAS COVERED.”
In a couple of places the Sox broke down on defense and they escaped without serious damage. The canvas
covered homer was the winner, and what the Giants counted after that made no difference, except that the extra tallies looked bad.

There were two gone in the fourth when Kauff sailed a wicked smash far over the dome of Happy Felsch. An advertising banner painted on canvas was displayed on the centerfield bleacher front. Before the show started the sign was taken down, rolled up and placed on the frass at the base of the wall in deep center. The ball got tangledin the canvas or rolled under it and Happy had a helava time digging it out. If Hap had peeled the wrapper off the pill as soon as he reached it he might have held Kauff to a triple, or maybe a double. The third man was an easy out.

In the fifth one single and two measly bunts filled the bags, with none out. Bill Rariden hit into a double play, Faber to Schalk to Gandil. Then Ferdy Schupp pulled the unexpected. He knocked a single and the second run came in. In the seventh Fletcher singled and took third on one wild pitch that was a bird. The next two made outs. With men on third and first, one out and Rariden up, the Giants pulled a hit-and-run squeeze play. Bill was heaved out at first, spoiling a double play, and Fletcher counted on the out.

ATTENDANCE PAINS ATHLETES.
With Danforth pitching in the eighth and one out, Herzog singled and Kauff hit the ball into the right field pavilion. Zim tripled to right field, and, after Fletcher struck out, Heine tried to steal home and failed. He had to pull something in the series or become sane. The Sox were helpless against Schupp. Four of their rounds started with clean hits, one of them a double, but Ferdy always tightened and his pals stuck to him like barnacles on the hull of a Hackensack coal scow. Nothing doing at any stage of the proceedings.

Another thing that pained the athletes on both sides was the drop in attendance. With strained eyes they beheld in stands and bleachers many vacant spots, which indicated that money was being peeled off the players in patches. This is not right. Only 27,746 paid in to-day, and the receipts went down to $63.742.

An added feature to-day was the march from second base to the home plate. Twelve of the Giants trudged that short distance carrying allied flags. In the middle walked McGraw with the Stars and Stripes. The band played “America.” Thinking it was ihe national anthem, the bugs stood up once more.

MATHEWSON IS CHEERED.
When they got seated. Emery Tit- man, the 500-pound Philly bug, came along the winding aisle back of the boxes and brushed everybody off the front row of seats. Mathewson was cheered when he headed for a front box. The men with cameras looking for features dragged Matty into the diamoud and posed him, with Kid Gleason, for a picture. Applause.

*Twenty-five players are eligible to a share on each team.