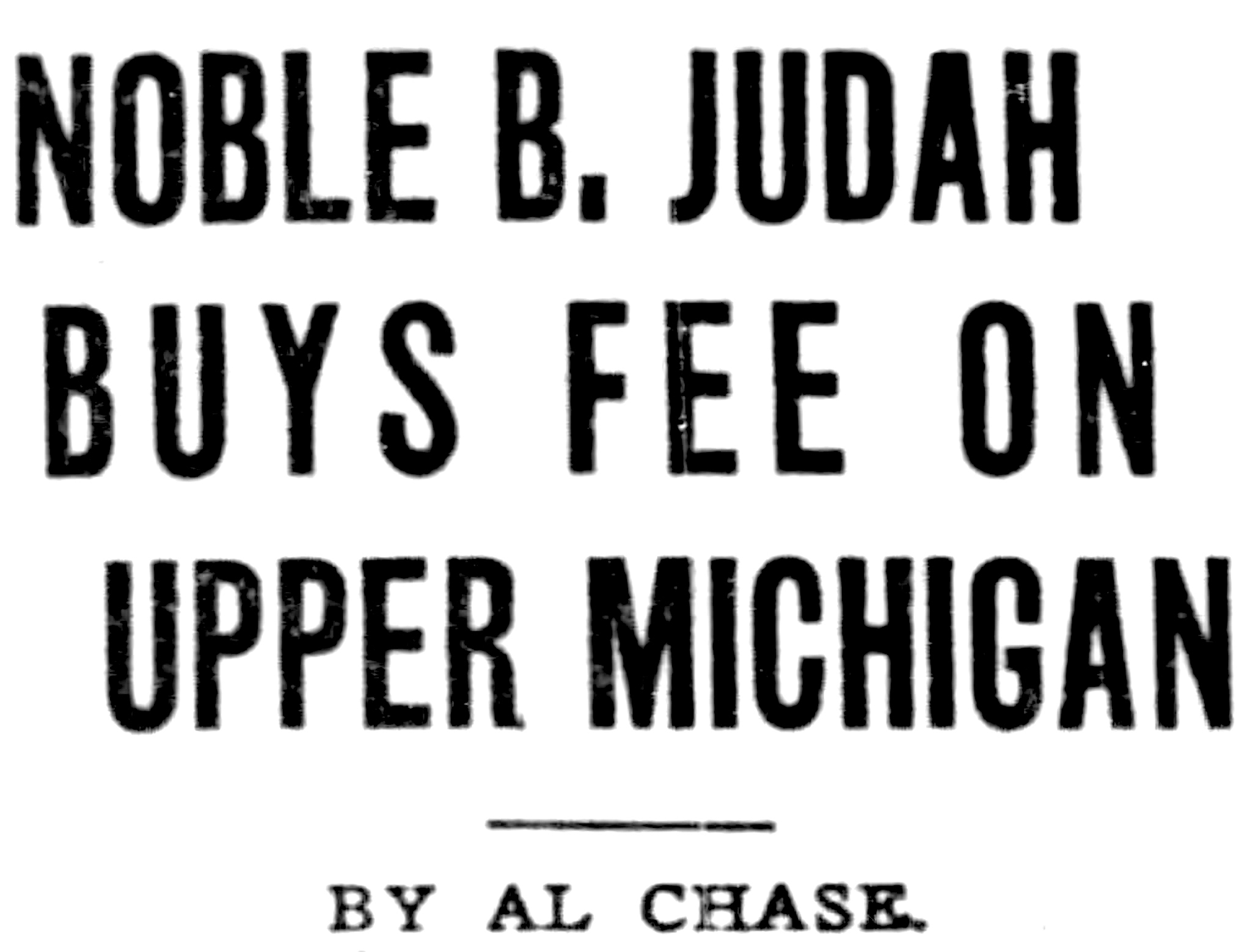 Noble Brandon Judah, member of the law firm Judah, Willard, Wolf & Reichmann, yesterday bought the 55 feet of frontage at 712-14 upper Michigan avenue, just south of and adjoining the Central Life Insurance company as well as the 144×150 across the alley at the northeast corner of Huron and Rush streets. Mr. Judah acquired the property, comprising four different former holidings from Frank Donnelley for an undisclosed consideration.

According to John H. Londrigan, of the Bowes Realty company, who negotiated the sale, Mr. Donnelley acquired the property just sold at different times during the last seven or eight years, through the Bowes concern.

The owners of the Michigan avenue frontage just acquired by Mr. Judah, before their houses were torn down for widening the boulevard, were members of the Fentress and Andrews families.

Mr. Judah purchased the property for investment, it is stated, and has no intention of improving the Boul Mich frontage or remodeling the Rush street residences.

Hiram Cody, vice president of the Cody Trust company, just back from a trip to California, announced last night that the Aetna Life Insurance company and the other three companies in the Aetna group, had appointed the Cody Trust company their exclusive correspondent for Chicago and Cook county, in the placing of insurance funds in city mortgages. 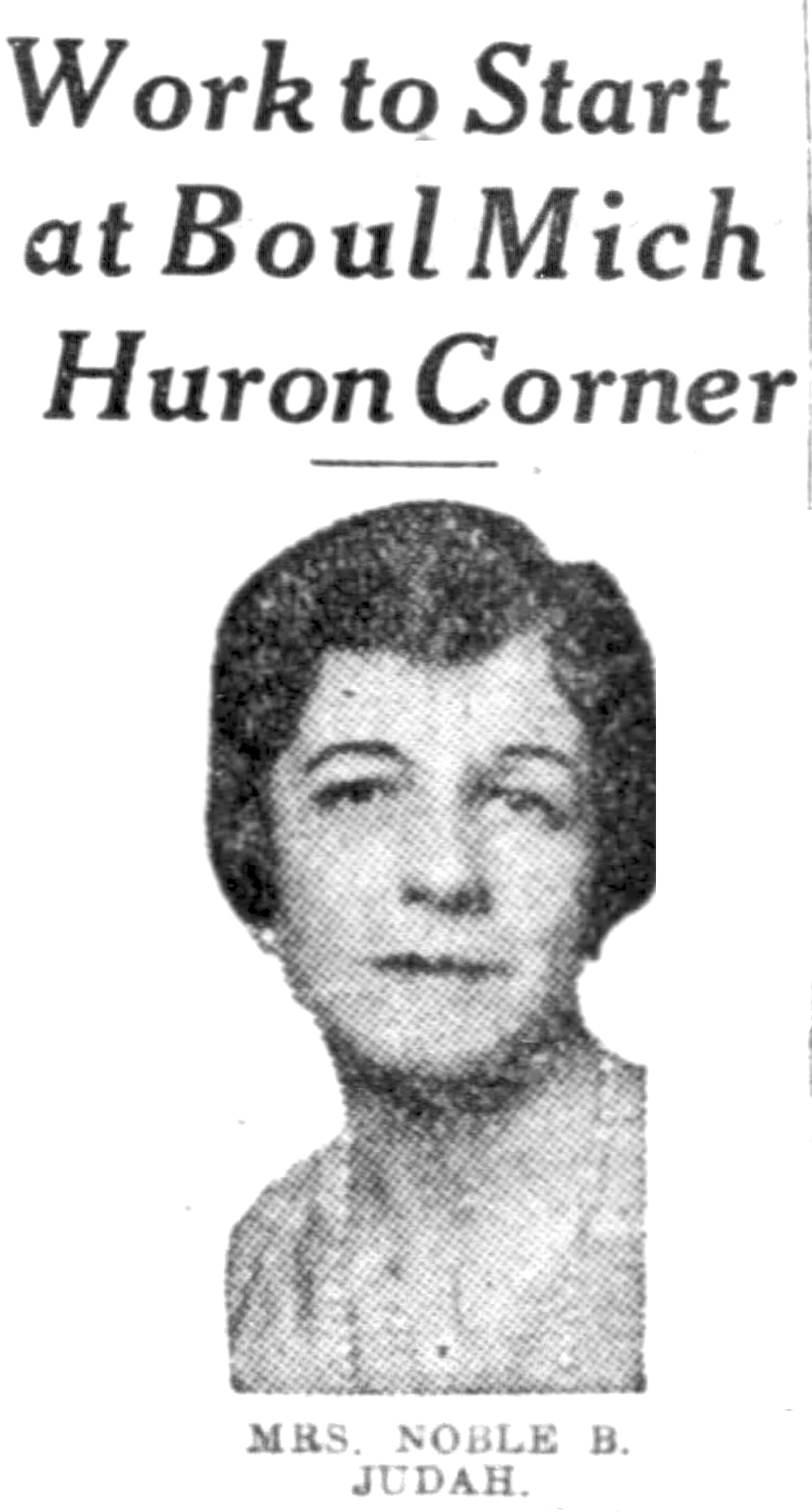 Work is scheduled to start at once on the five story building announced some time ago for the northwest corner of Upper Michigan avenue and East Huron street. This site was purchased last year by Dorothy Patterson Judah, wife of Noble Brandon Judah, American ambassador to Cuba, and she will be the owner of the new building.

Plans by Holabird & Root call for a polished granite exterior on the first and second floors, with Alabama limestone used in the three upper floors. Plate glass will be used throughout.

As American walnut has been used in practically every new office building, theater and hotel erected in the last few years, Holabird & Root have introduced what is believed will be a novelty for the first and second floor lobbies of the 700 North Michigan building, as it’s to be christened. Butternut wood will be used. The floor will be rubber. The upper floors will be faced with marble.

The building will be of reinforced concrete construction, wityh unusually high ceilings in the upper office floors. These will be eleven feet high in the clear. These upper floors can be used by tenants of the eight first floor shops if needed.

The second floor will have ceilings practically as high as the first floor with large windows overlooking Boul. Mich. The basement also will have high ceilings so space there can be used for selling purposes.

The building will have a frontage of 164 feet on the boulevard, with a depth of sixty-eight feet along Huron street. It will cost approximately $650,000 and according to the architects, will be completed by April, 1929. 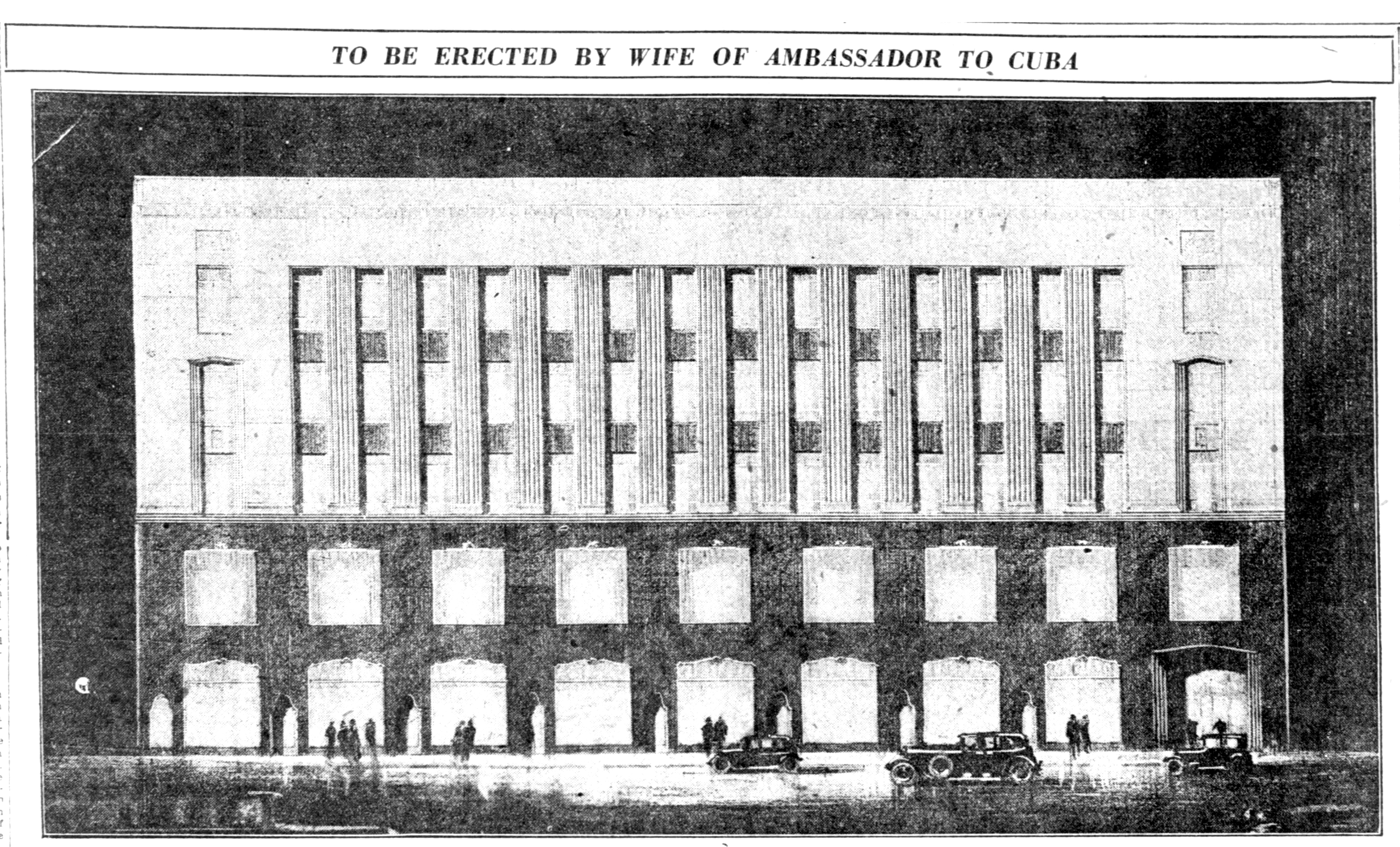 Mrs. Noble Brandon Judah will build the above structure at the northwest corner of upper Michigan avenue and Huron street from plans by Holabird and Root. It’ll be of polished granite exterior in the two lower floors with Alabama limestone used in the upper stories. The total cost is placed at $650,000. Completion is planned for April 1, 1929. 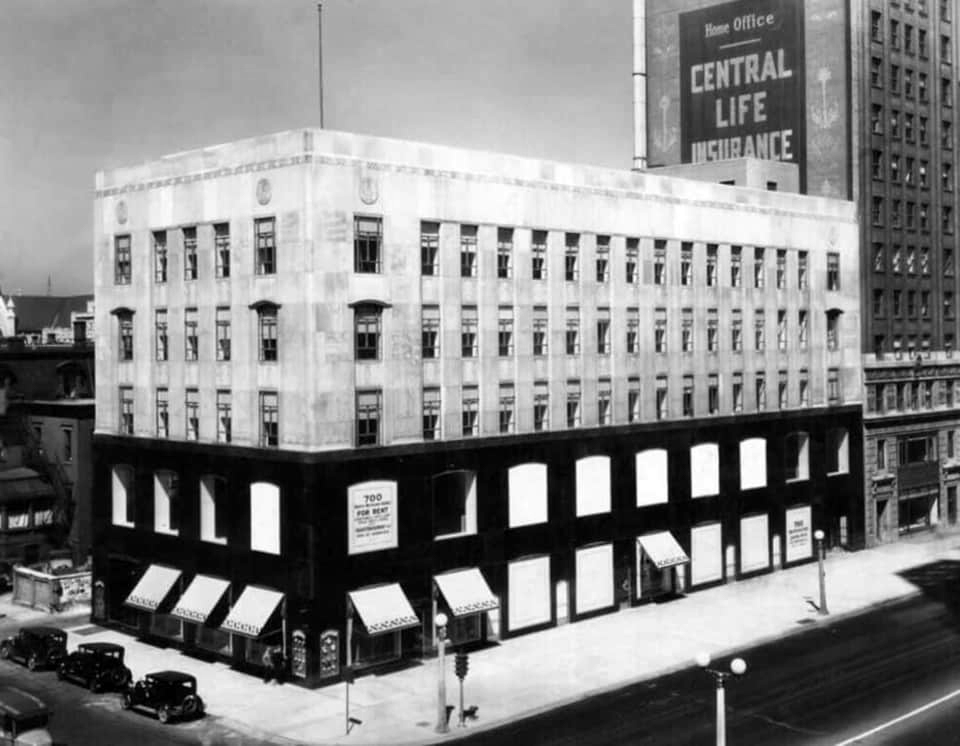 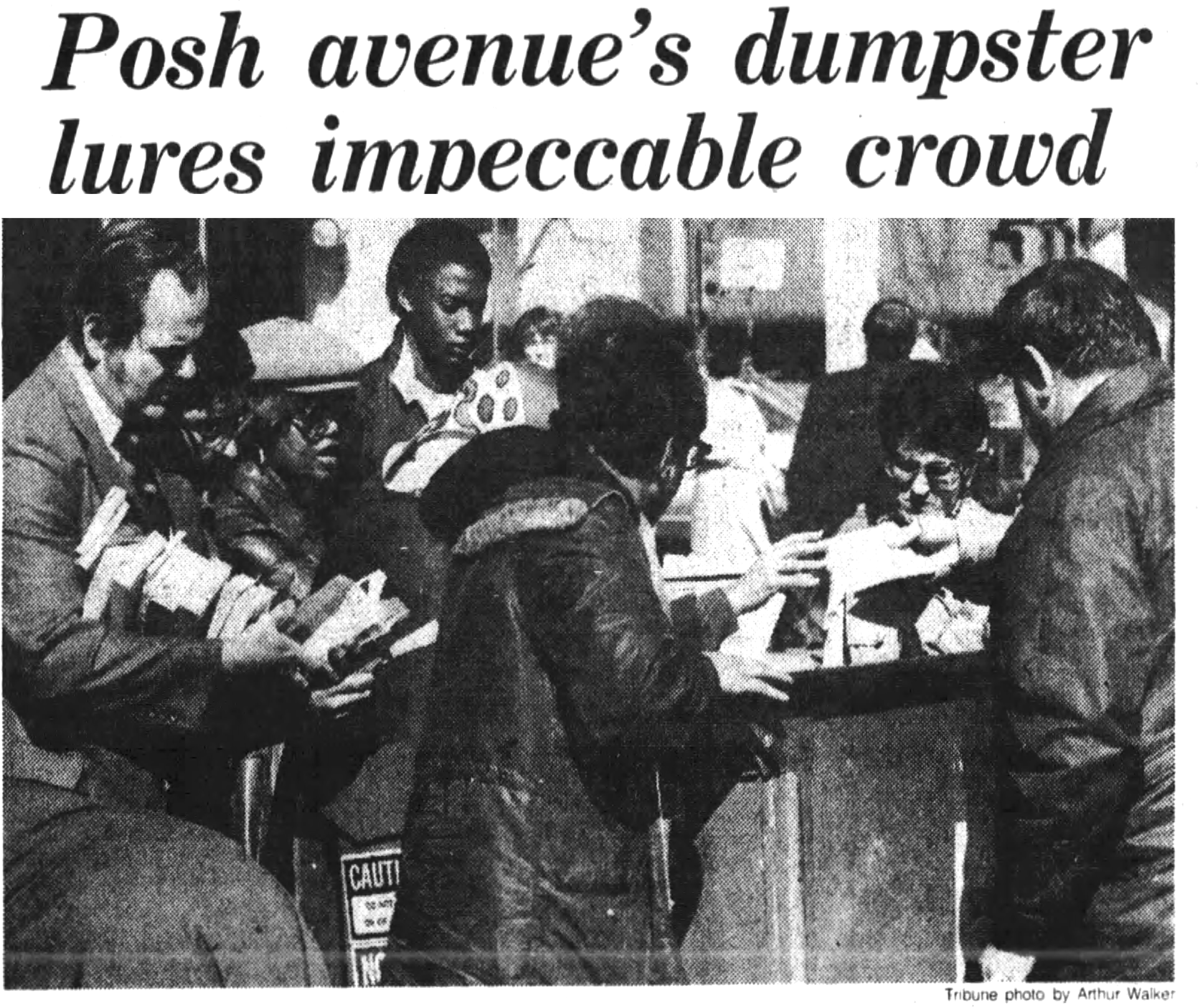 Seeing people rummage through a dumpster near Chicago’s swank North Michigan Avenue is not unusual. Times are rough.

But when those people are impeccably groomed Gold Coast women, attorneys and accountants, there must be an explanation. Times are not that tough.

Their binding interest was not some new-found poverty, but an interest in good books. On Tuesday afternoon, Michigan Avenue and Huron Street resembled a scene more typical of the Maxwell Street bargain shop area.

B. Dalton Booksellers is closing its store at 700 N. Michigan Ave. because the building is to be demolished, and the store was discarding some “destroyed” paperbacks as part of the moving process. But most of the books were still readable, and the bargains attracted an eclectic mix.

One of the women, who pleaded for anonymity, said:

We live in the area, and we just love going through garbage cans, said . “We just think of the hunt. It’s something we can’t resist. We just came by and saw this big crowd. I guess we’re bag ladies. 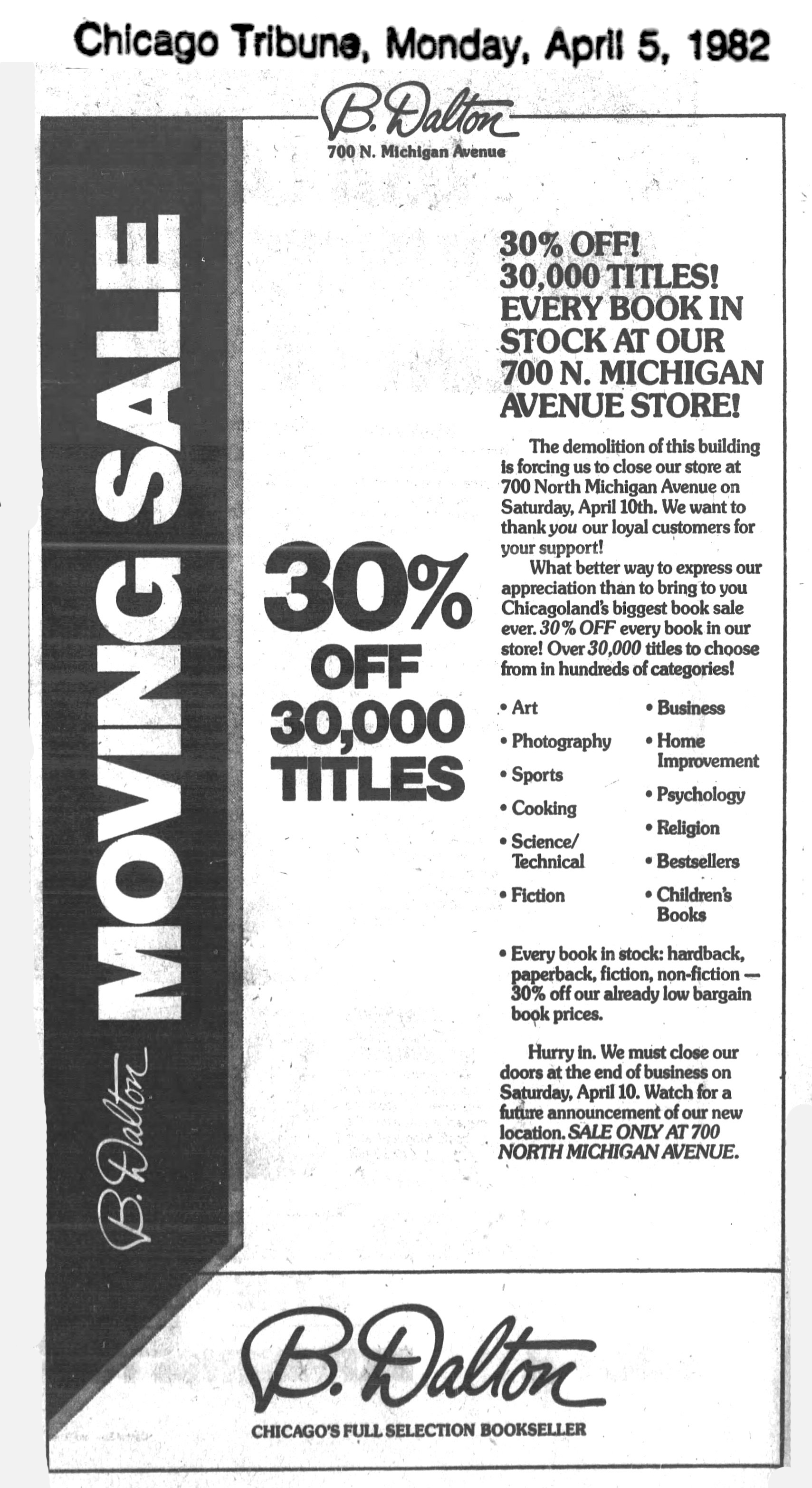 Please don’t put our names in the paper. Her husband is a doctor, and hers is a lawyer. Just say that we are attractive middle-age women in the dump.

For others, the allure of free books was equally compelling.

One browser at the dumpster said:

The sexy ones are coming out next. I hope the next load isn’t on child rearing. I’m through with that.

Richard Donahue, regional manager for B. Dalton Booksellers in Chicago, said the books had to be thrown out—instead of being donated to charity—because of an agreement between publishers and book sellers.

Dozens of book lovers lauded that agreement as they combed the dumpster in search of free literature.

Karen Gray-Keeler, 27, a lawyer who lives on the Near North Side, was wheeling her 9-month-old son, Daniel, down North Avenue Michigan Avenue when she saw crowd surrounding the large red dumpster. She said:

I saw all these people getting books. I’m an avid reader, so I went over. They’ve been bringing out a little of everything.

Lee Harris, a 32-year old domestic worker from the South Side, said she just gotten off the bus to go to Woolworth’s, when she saw the hoard. Harris said:

I like to read. I can’t pass this up. You can’t beat this. I should have brought my sister with me. I was going to Woolworth’s, but being inquisitive, I wanted to see what was going on. When I found out, I went to get a shopping bag.

Perhaps Jack Budz, 33, an accountant from Bartlett, best put the event in perspective:

One person said that anyone else could live on the stuff that Americans throw out for garbage. This is a good example.

Oxford Properties, Inc. has confirmed reports that it’s shooting for an October starting date for its $150 million project at 700 N. Michigan Ave.

The project will consist of an 8-story, 350,000-square-foot retail base and 585 rental apartments in 56 stories above it.

The retail component will be anchored by a 150,000-square-foot department store. An anchor tenant hasn’t been signed, but Daniel McCaffery, senior vice president in charge of Oxford’s Chicago office, said it would either be Sak’s Fifth Avenue or Carson Pirie Scott & Co. Saks, at 669 N. Michigan, reportedly is seeking larger quarters, while Carsons has long sought a location on the avenue.

The October date is only a goal, and much will depend on how city officials and Michigan Avenue neighbors respond to the proposed development, according to McCaffery.

“We haven’t even filed our PUD (planned unit development) with the city,” he said. “We have a contractor studying staging (of construction) and access from Michigan Avenue, and that won’t be easy. And there are a lot of neighborhood groups and the character of Michigan Avenue to be sensitive to.”

Details of the 700 N. Michigan project were first reported last October. Oxford’s site is bounded by Michigan and Superior, Huron and Rush Streets and its vacant except for a parking garage that will be razed.

If construction begins in October, the shopping portion could open for business in late 1987 and the apartments about six months later, McCaffery said. The project also will have four levels of underground parking for about 325 cars.

Capital Associates Development Corp. will be Oxford’s partner in the development of the apartment tower. Oxford has dropped plans to include a hotel in the project, McCafferty said.

Skidmore, Owings & Merrill of Chicago is the architect. 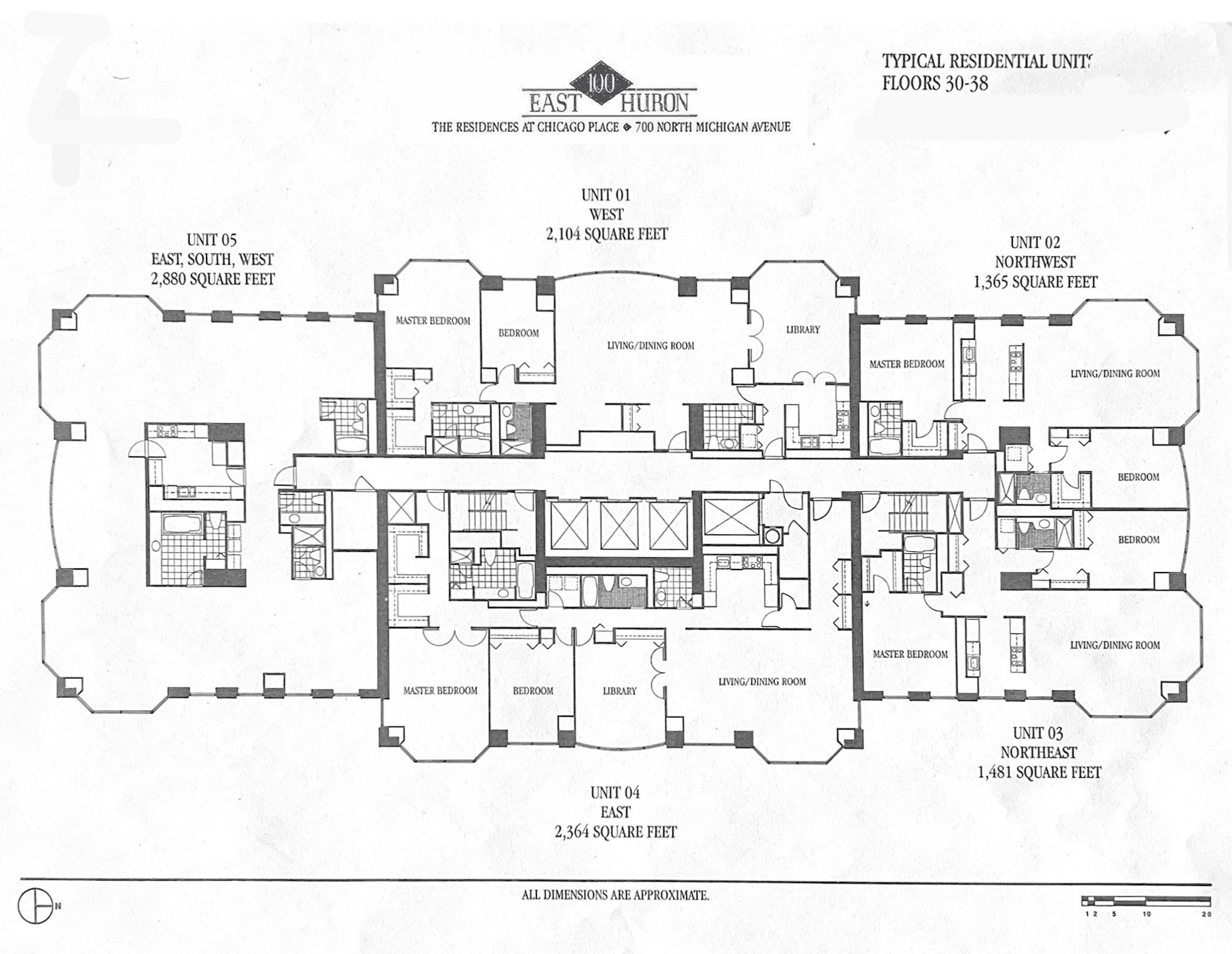