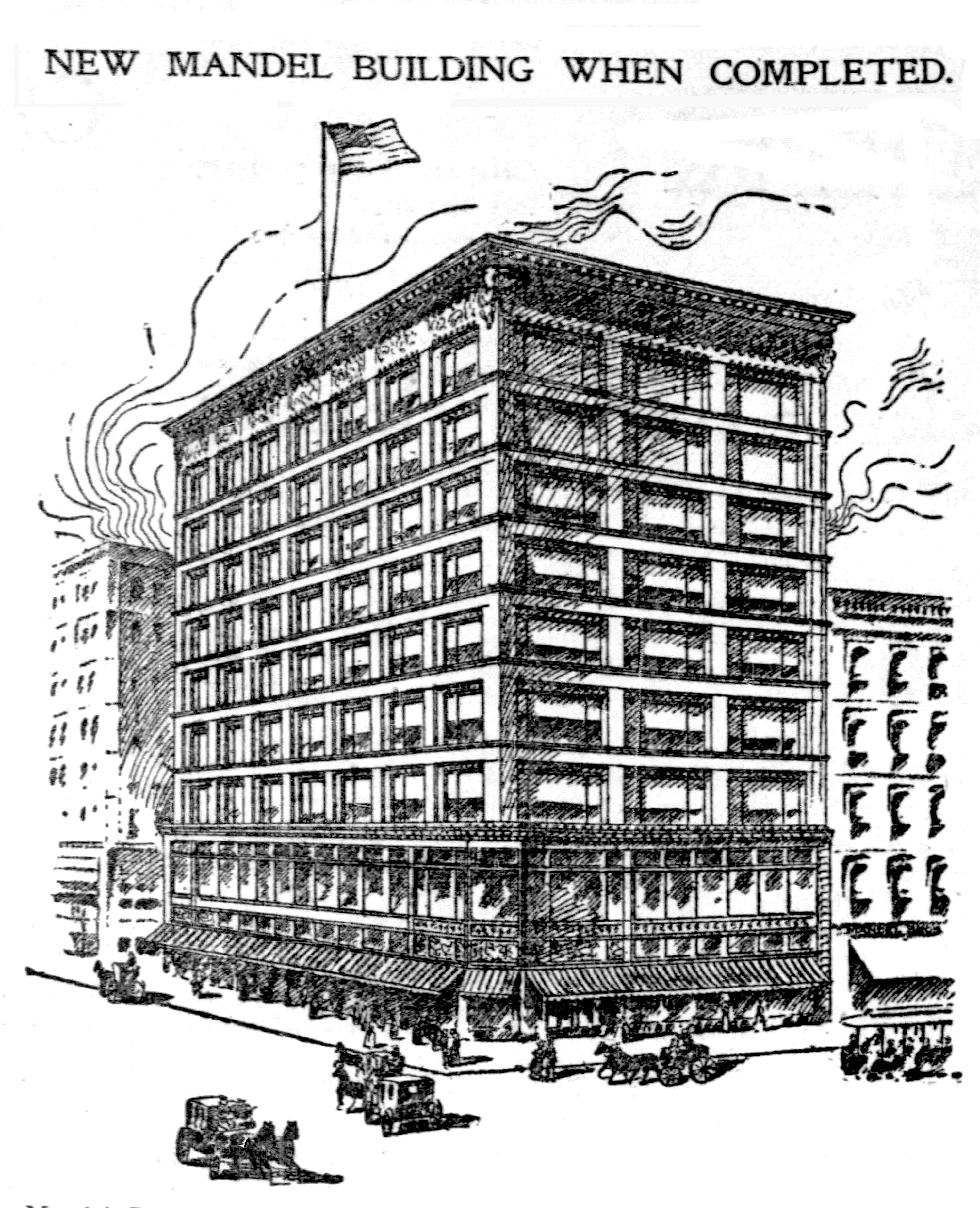 It is expected that ground will be broken this week for the foundation. Contracts have already been awarded for the structural steel and double-glazed walls, and work will be rushed to complete the building before the first of the coming year. Architects Holabird & Roche, who prepared the plans, will look after the construction. The new and old buildings of the firm will be connected by a three-story bridge over the alley, connecting with the State street building.

The principal features of the new building will be large show windows on the first and second floors, electrical elevators, and space devoted to the different departmental needs of the business of a mammoth store.

The firm of Holabird & Roche has just completed another of a series of buildings at Chicago, which serves to give additional evidence of the evolution of Constructive Architecture in steel and clay in that city. The Central Trading Company’s Building, occupied as part of the department store of Mandel Brothers, has been erected during the past six months at the northwest corner of Wabash Avenue and Madison Street. It fronts 64 ft. on the avenue, an equal amount on a wide alley in the rear, and 150 ft. on Madison Street. As will be seen, it is divided into three bays on the avenue front and seven on the street. Each bay is 21 ft., 1¾ ins. from center to center of steel exterior columns, and constitutes a constructional unit. The width over all is 64 ft. and the length 150 ft. The total height is nine stories and basement, but this height is not shown on any of the illustrations. Fig. 1, showing the method and order of construction, is from a photograph taken from the upper story of a building on Wabash Avenue, looking over the Elevated Railroad Station, and Fig. 2 shows only five bays and the four upper stories of the Madison Street front, from a photograph taken from the window of a building on Madison Street. Figs. 3 and 4 (see line plates, Nos. 33 and 40) show the details of the whole construction to scale. It may he added for explanation that the buildings to the right and left, as shown on Fig. 1, are the older parts of the Mandel establishment, the latter being connected with the new building by enclosed bridges across the alley. 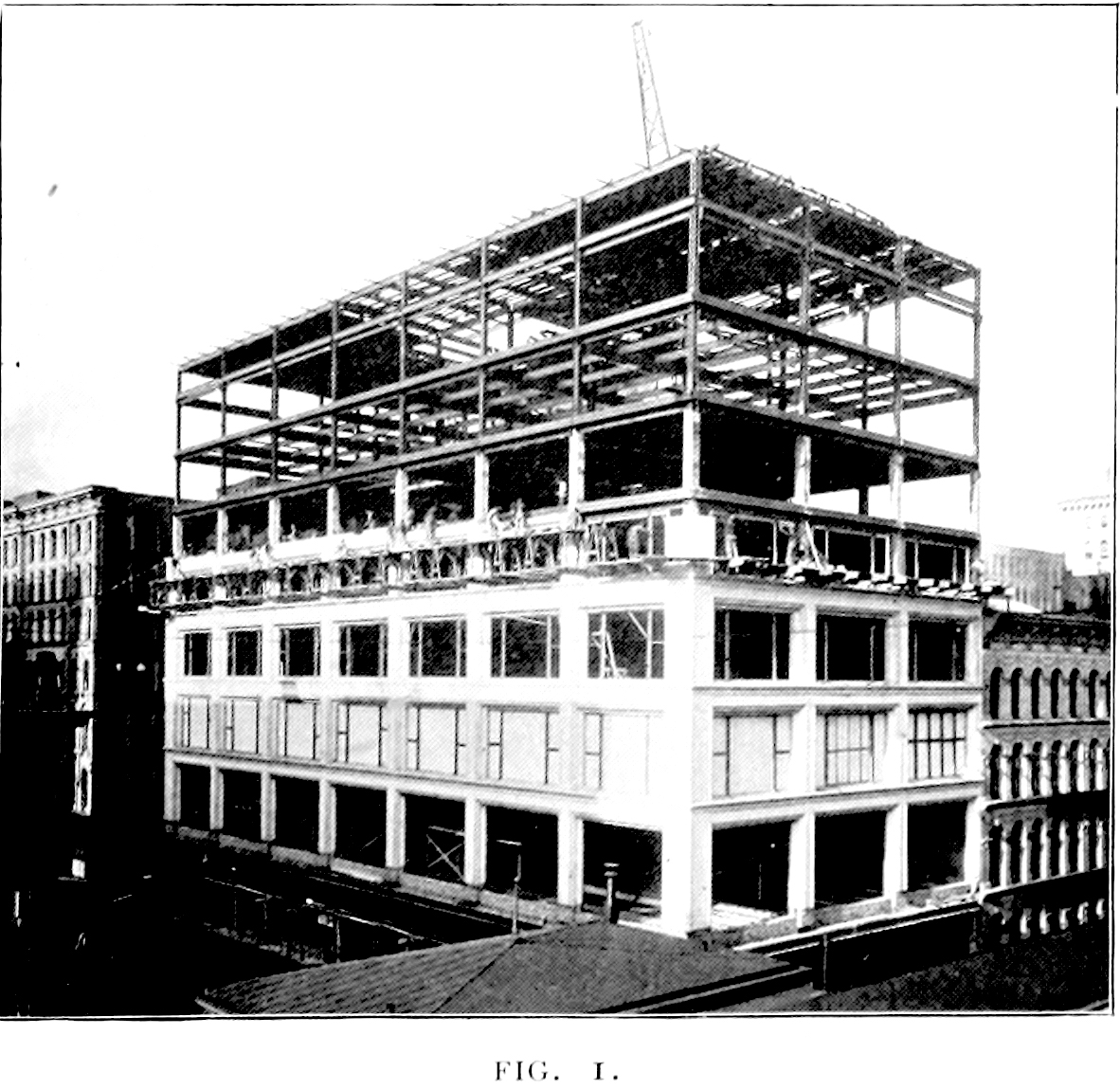 The spacing of the steel columns of the interior corresponds with those on the exterior, and the columns that carry the north side are built against the old party wall of the adjoining building, which belongs to the same owners. The fire-proofing and floor construction throughout is with porous terra-cotta. The floors are 15 ins. hollow tile, end-pressure construction, and were set before the enclosing walls. Outside and inside columns and girders were lire-proofed alike. The north wall above the roof of the adjoining building was enclosed with 12 ins. of brickwork-, which was carried, 4 ins. in thickness, around both sides of the fire-proofing of the columns, and enclosed the fire-proofed wall girders also.

The entire exterior is built with cream-colored enameled terra-cotta by the Northwestern Terra-cotta Company. Fig. 2 shows what this is so perfectly that no additional description is necessary. To show how this was attained, in one respect, I will say though I hope that in so doing I am not betraying any secret that all the bed joints of this terra-cotta were ground on a rubbing bed. No attempt has been made to “flatten” the surface of the enamel; it is as perfect as can be made. This perfection of workmanship has made it look as if made in a single piece, which is not satisfying to the critical eye. But time, and more especially smoke, will soon make the joints more evident. 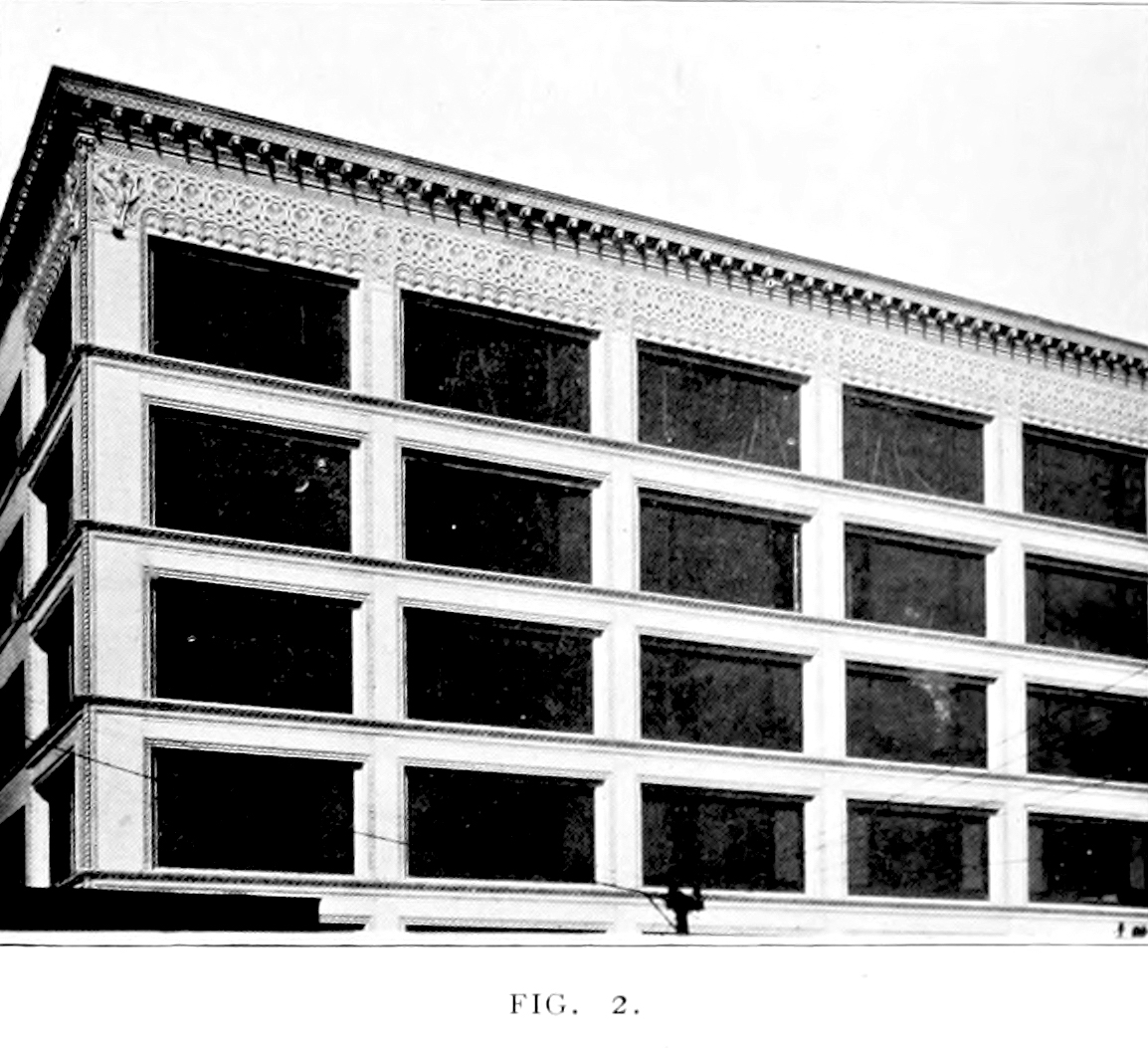 The speaking illustration (Fig. 2) and the scale details (Figs. 3 and 4) show better than words can tell how the problem has been considered from the point of view of artistic design. Here, again, is seen the use of broad windows in a high building so successfully used elsewhere by the same architects. But in this, also, the constructive lines are emphasized and harmonize with the commercial demand for the greatest amount of daylight. The idea of a wall is only suggested, the piers and transoms being only sufficient to cover the steel structure and sustain the window frames. The detail docs not show its derivation from any of the historical styles of architecture ; hence it must look to the future historian for a name. Some may say “This is not art,” but better let the future decide that. 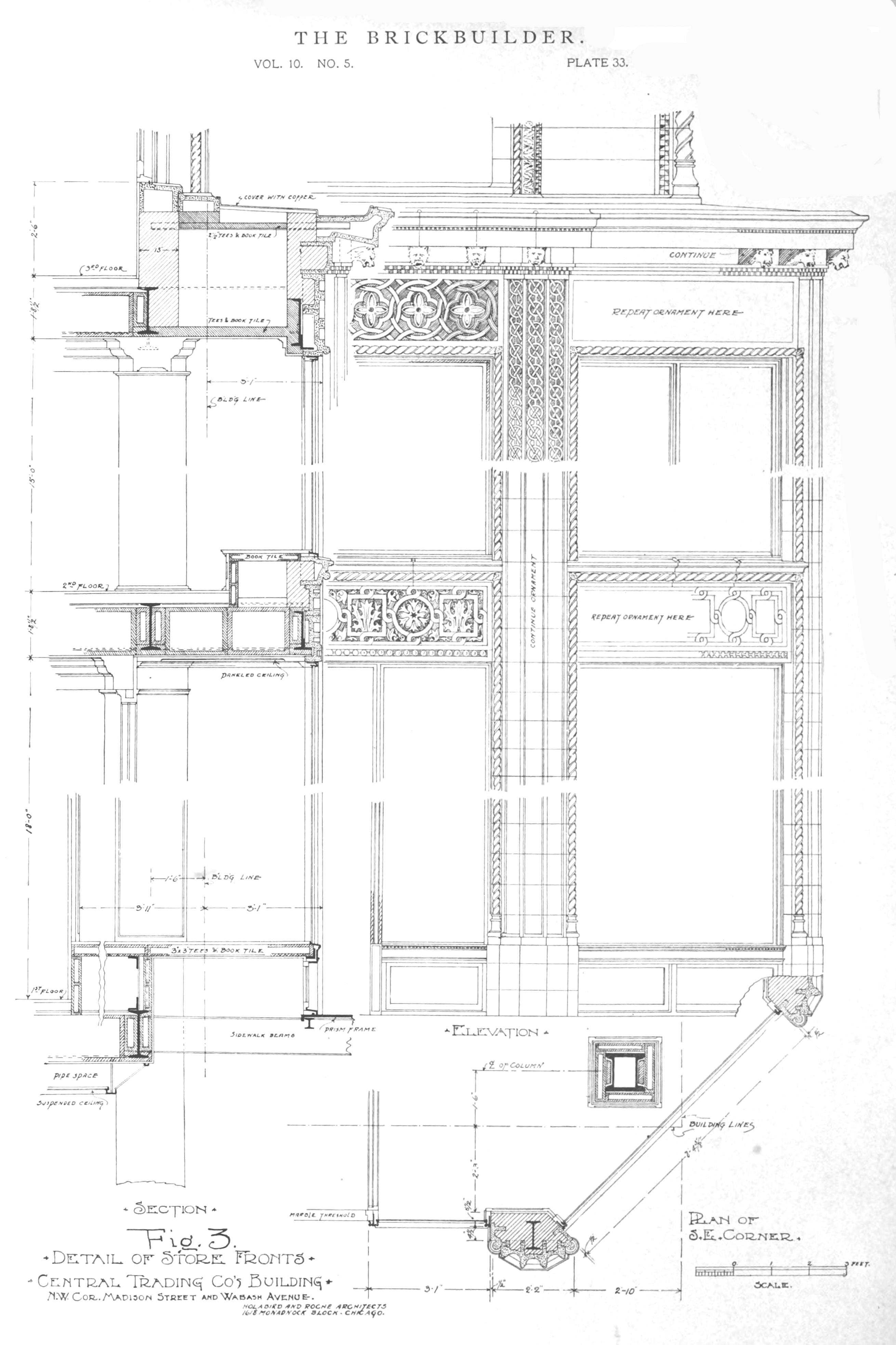 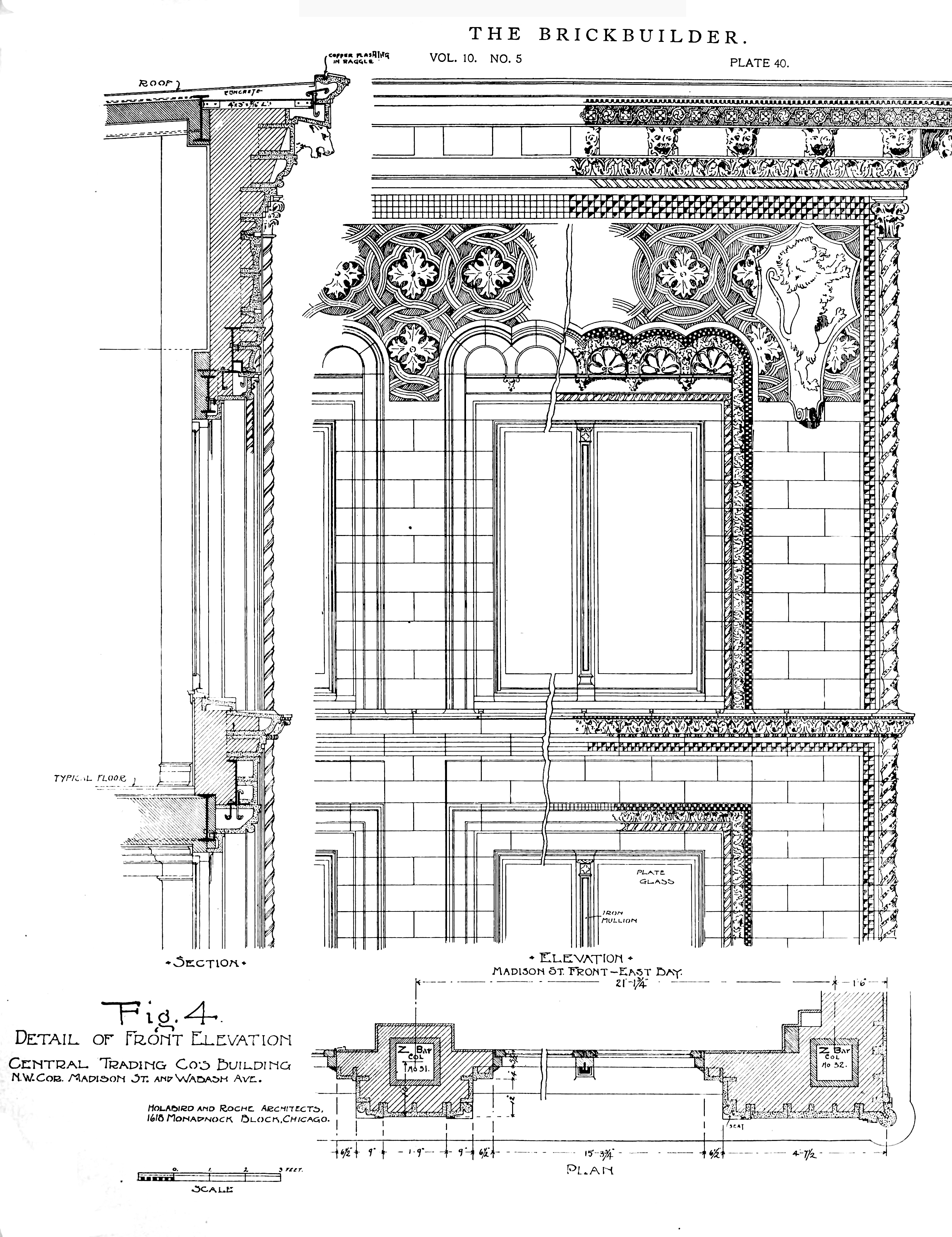 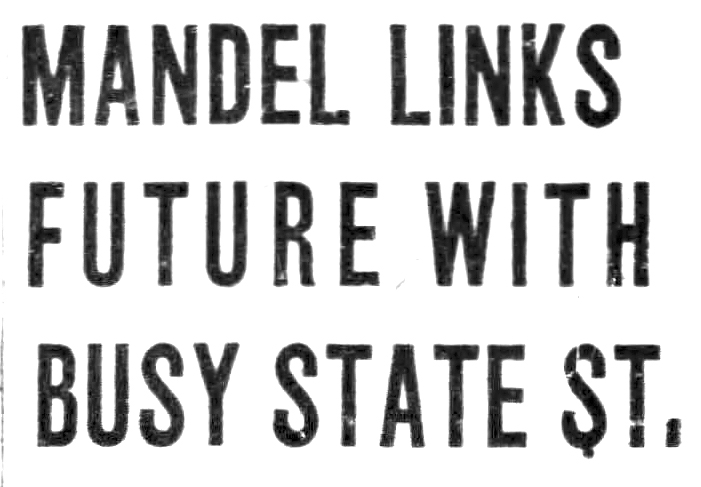 All plans of the big store, which twice rose from ashes of fires in its first century, revolve around a greater State st. operation, said Stoll in an interview.

Expects Roads to Aid.
Still’s optimism springs from the belief that super-highways under construction to link the Loop with suburban areas will bring more shoppers to State st. with its compact and wide selection of merchandise.

A large birthday cake was cut by Stoll yesterday during an employee salute to the store. More than 1,000 employees took part in the ceremony at noon in the employee’s restaurant.

It was one of several parties thruout the store. Aiding Stoll in the cake cutting were employees with more than 50 years of service. 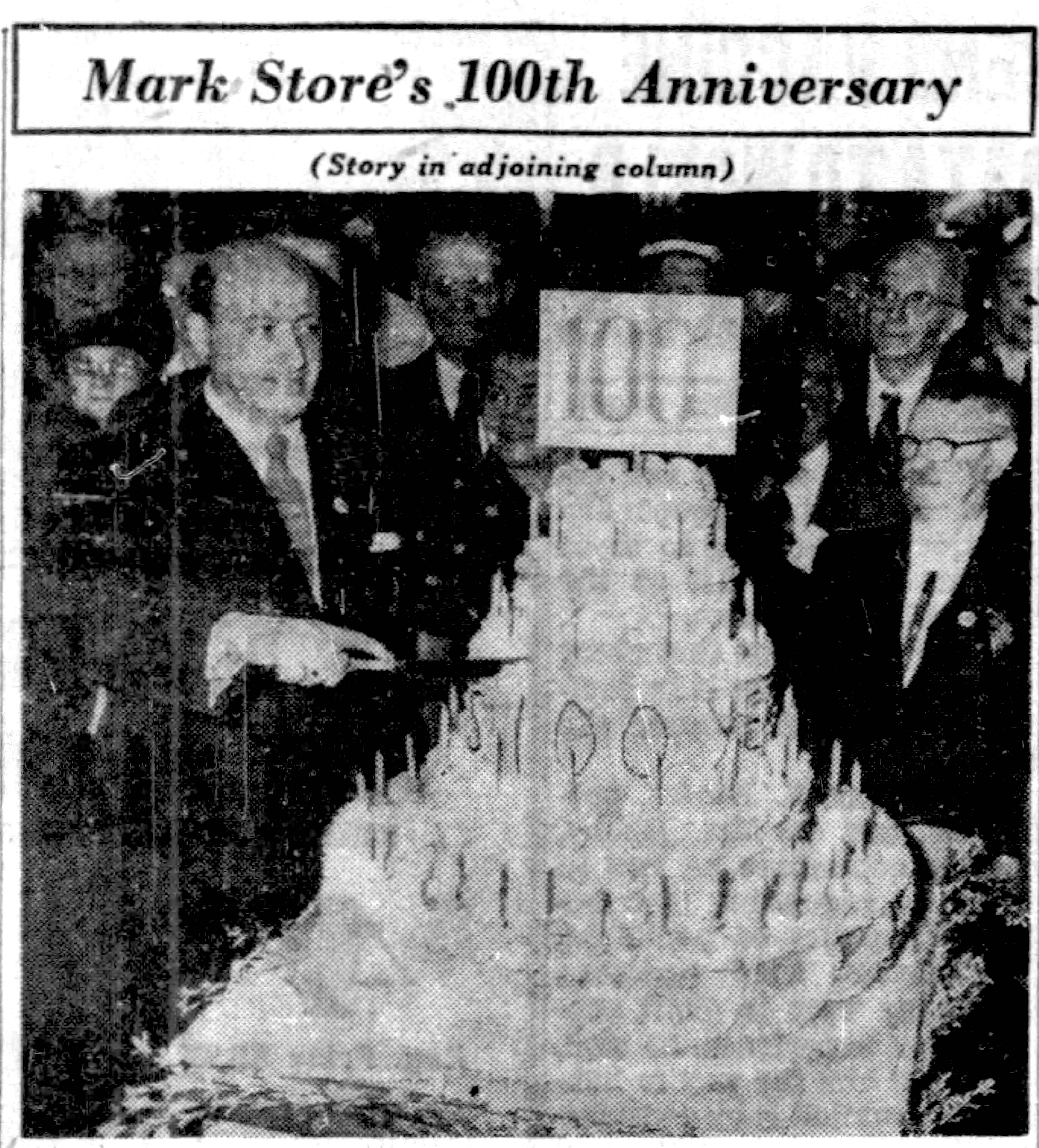 A Theme in Flowers.
This morning Mandel’s opens its 5 million dollar, 100th anniversary sale, which centers around a fresh flower theme. The theme was inspired by a tradition common in the British isles, where stores install flower boxes on their window ledges in the spring.

Mandel’s has placed 160 feet of flower boxes near the second floor level of the State st. side of its store at State and Madison sts., one of the world’s most famous business corners.

The display will be maintained to the the end of the store’s centennial year with plantings changing with the seasons. Inside, the first floor will have ledge displays of thousands of cut flowers and plants under lighted canopies.

Always Under Mandels.
In its 100 years, the Mandel store has remained under leadership of the Mandel family. The Mandel name first came into the title of a Chicago company in 1855.

In that year a dry goods business in Clark st. operated by Simon Klein became Klein & Mandel. After the death of Klein, his nephews, the four Mandel brothers, Solomon, Leon, Emanuel, and Simon, established in 1865 the partnership which brought them renown as merchants.

When the present Loop store was built in 1912, the founding brothers were dead and management was in the hands of the second generation, foremost of whom was Frederick Leon Mandel, eldest son of Leon Mandel.

Without detracting from the importance and probable growth of the two branches, the important nucleus of Mandel’s grtowth still will be State ., said Stoll.

Family from Bavaria
The Mandel family came to Chicago from the little town of Kerzenheim, Bavaria, Germany.

In 1870 the brothers built a three story building at Harrison and State sts., which was destroyed by the great Chicago fire of 1871, rebuilt and destroyed by fire again in 1874.

Mandel’s opened for business the day after the 1871 fire in a converted cigar store they bought at 22d st. and Michigan av.