SIDNEY SMITH’S CARTOONS IN SELIG FILMS.
Sidney Smith, the famous Chicago Tribune cartoonist, whose portrait appears herewith, surrounded by his famous character, “Old Doc Yak” in various poses, has made his adventures as a motion picture entertainer. Mr. Smith has completed the first of a series of animated cartoon novelties which will be released by the Selig Polyscope Company on July 8th. The general title of the series will be “Seligettes.” The first release in the series runs approximately six hundred feet and will be called “Old Doc Yak.” It required several thousand separate drawings to obtain the desired results.

OLD DOC YAK (Seligettes, Series No. 1) (July 8).
Sidney Smith, the artist, incurs the displeasure of the Sunday Editor by his oft-repeated failure to report at the art room on time. A moving picture producer one morning applies for, and obtains, permission from the newspaper to reproduce in animated form their comic supplement character, “Old Doc Yak,” The producer’s requirements call for one thousand separate, carefully prepared original drawings from the pen of Artist Smith before noon of that day. The Sunday Editor rushes to the art room, but Smith has not shown up that morning. Along about noon the artist comes sauntering in very leisurely. The Sunday Editor, peeved at Smith’s seeming indifference to newspaper office discipline, tells him of the work before him and that one thousand drawings must be absolutely finished inside of an hour. Smith offers to bet $50 that he can accomplish the task. The Editor bets him that he can’t and the stakes are placed in the hands of another artist. Then we see a close-up view of Smith’s hand as it rapidly draws and inks in a face of the ever laughable goat. This face then comes to life and its contortions are wonderfully amusing, Next he draws a scene showing “Doc” standing in a room looking intently at a bee. The drawing suddenly comes to life and the antics of the pair are truly funny. Another scene shows an enlarged view of “Doc’s” face after it has been stung by the bee. This and many other amusing and novel scenes are climaxed by the unique illusion which is secured in the finis piece. Needless to say, Smith wins his bet and the art room takes a vacation for the afternoon, while the money is spent.

OLD DOC YAK AND THE ARTIST’S DREAM (Oct. 30).
Of course, the artist is behind in his work—for that, he is an artist; and the impertinent office boy reproves him—for that, he is an office boy. Sleepily and automatically he draws a picture of Doc Yak and then, awakening, throws him into his work again; then cat-naps. There is a vibratory stir in the basket; Doc Yak comes to life and climbs out, and thereafter becomes a very active feature in the animated comicalities that line up and disappear in this merry mystery. 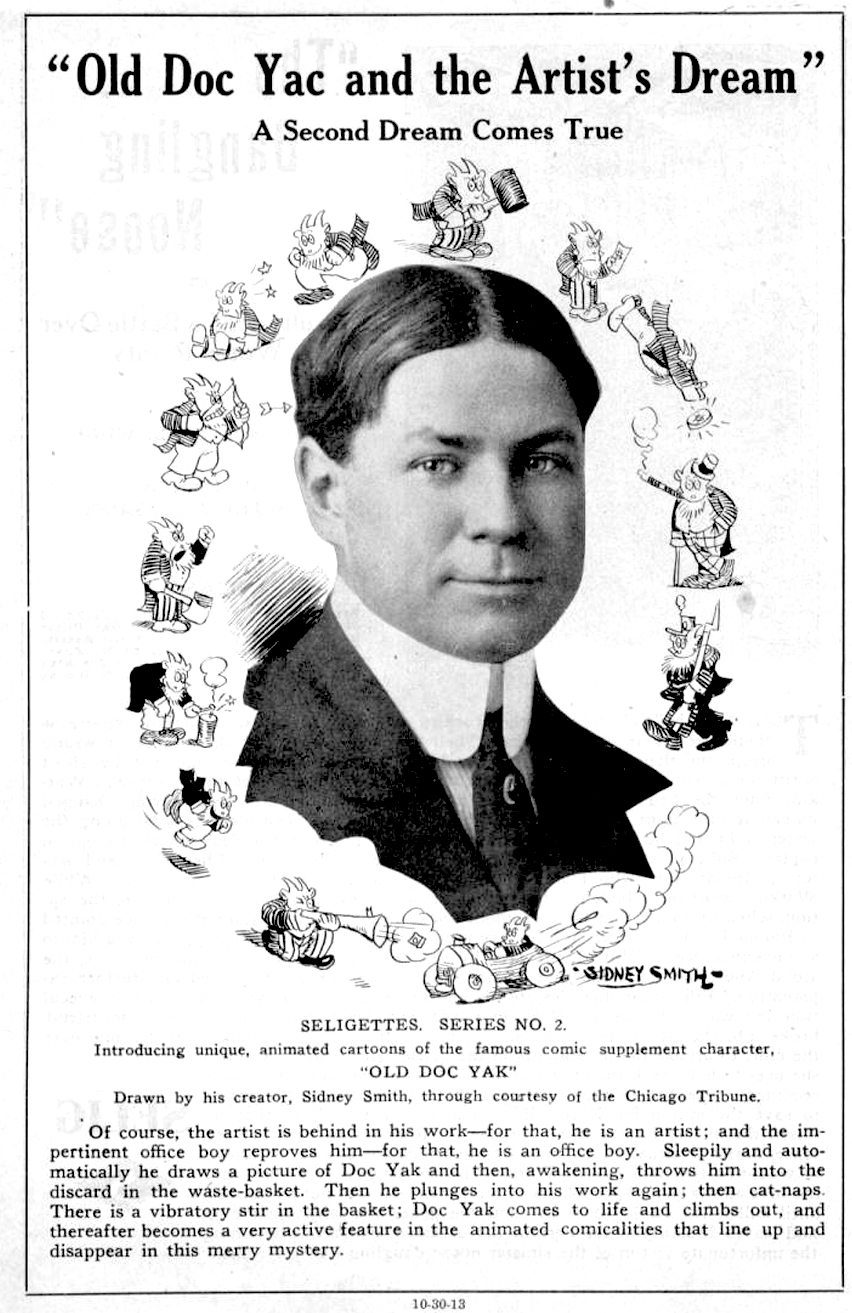 A NEW SELIG ADOPTION.
Owing to the great success of the trick pictures, known as “Doc Yak Dreams,” by Sidney Smith, the celebrated cartoonist of The Chicago Tribune, arrangements have been perfected by the Selig Polyscope Co., for making this a regular feature. This series of comics takes an entirely new vein of handling with a very amusing and original subject.

OLD DOC YAK AND THE ARTIST’S DREAM (Oct. 30).
The second of the series of comic cartoons drawn by Sidney Smith. The mechanical means used to give motion to the figure, Doc Yac. is too apparent. There is little wit in the jokes. There were few laughs from the audience.

DOC YAK’S CHRISTMAS (Dec. 25).—Old Doc Tak In his time has experienced many vicissitudes in his precarious practice. The collection of bills has caused blm more annoyances, more funny falls and more amusing contretempes, than almost any creation In the domain of cartoon. He has met all forms of man and heast that the broad em- pire of the world could furnish. He has butted in Into all sorts of predicaments and happily has the faculty of butting out. so that although jarred by many falls, he usually lands right side up merely seeing stars does not disconcert him. “This new adventure is with the children’s favorite, Santa Clans. Doc Yak has been “done” so much and so often, that he feels gifts are due him. How he “gets his,” Is an amusing and Ingenious story of this popular Christmas offering from the crayon of Sidney Smith. 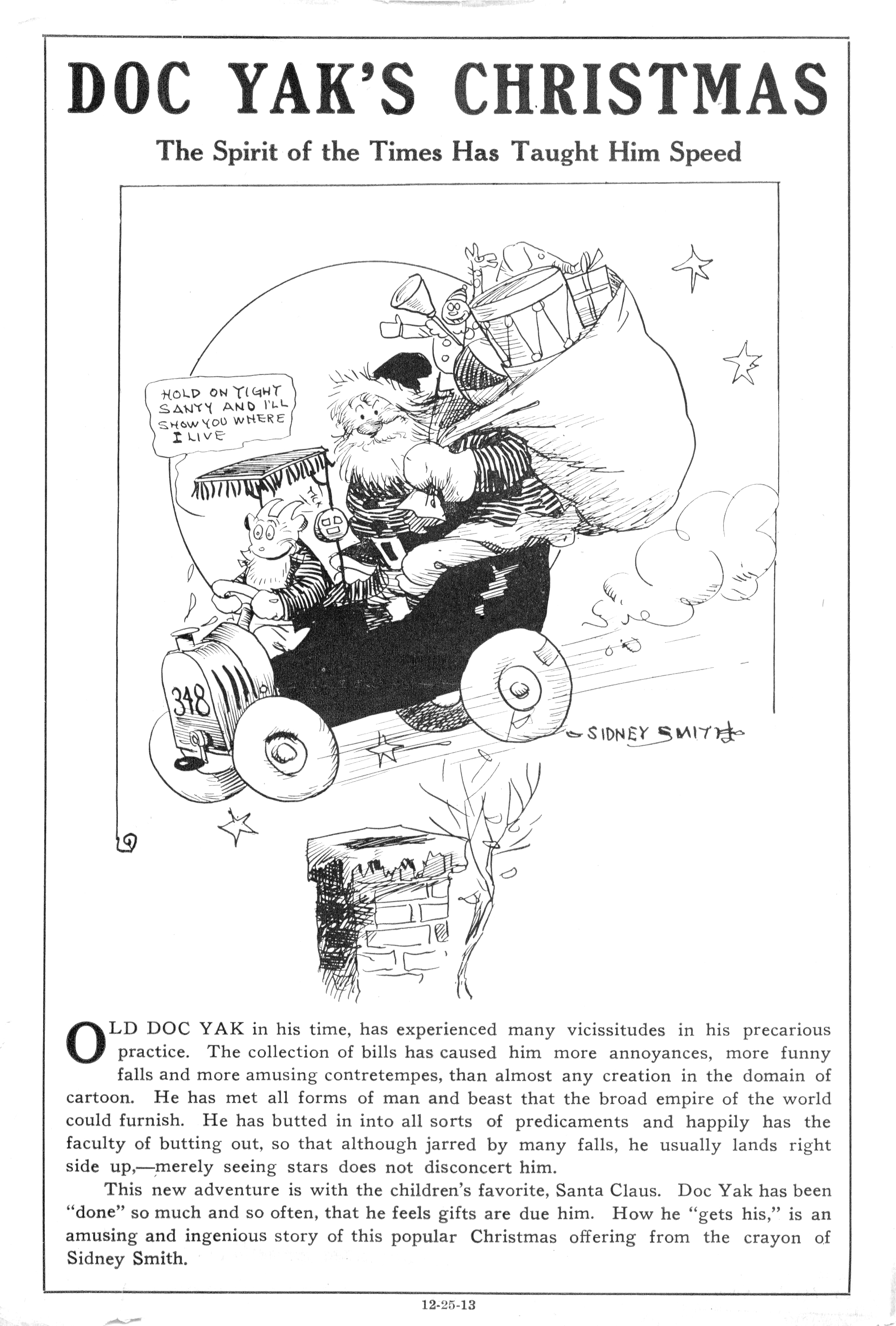 DOC YAK MOVING PICTURE ARTIST (Jan. 23).
Everyone is interested in thp making of a modern newspaper, and a peep behind the doors in the ‘the world’s greatest”—shows how ink flies when inspiration strikes, or the persistent copy boy (known as “the devil”) stands at the artist’s elbow urging haste. How Old Doe Yak materializes in the busy brain of the cartoonist, and walks- right into the picture, adding to the gaiety of nations, is shown most amusingly. After the page is drawn Doc Yak becomes animated, pours gasoline into his tank, cranks up and whirls off in a cloud of smoke. There is only one Doc Yak. and Sidney Smith is his creator, general director and faithful delineator.

DOC YAK, THE POULTRYMAN (Selig), Mach 25.—A number of animated drawings by Sidney Smith, showing his well known character, Doc Yak, in the chicken business. On same reel with above.

DOC YAK BOWLING (Selig), May 5.—This tag, on the same reel with newspaper cartoonist, and the ingenuity of the Selig company’s technicians.

DOC YAK’S TEMPERANCE LECTURE (Selig), May 1.—Cartoonist Sydney Smith’s little “Doc Yak” character which appears daily in the Chicago Tribune is always interesting and in this “tag” to “On the Minute” Mr. Smith has done some particularly clever work in the way of transformation drawing.

DOC YAK, THE MARKSMAN (Selig), May 12.—Another series of funny antics by Sydney Smith’s popular cartoon character used as a “tag” on the reel with “Marian, the Holy Terror.”

DOC YAK’S BOTTLE (Selig), October 9. —On the same reel as “Jimmie the Porter.” This comic comes very near being the best of this series of animated cartoons, and is greeted with great appreciation.

DOC YAK PLAYS GOLF (Selig), Nov. 23.—On the same reel with “Out of Petticoat Lane.” An animated cartoon by Sidney Smith depicting the ludicrous adventures and escapades of Doc Yak.

DOC YAK AND SANTA CLAUS (Selig), Dec. 25.—Decidedly humorous and very laughable adventures of Doc Yak and Santa Claus. These are the Seligettes drawn by Sidney Smith, the popular cartoonist of the Chicago Sunday Tribune.

The Chicago Tribune’s Animated Weekly, in moving pic- tures,ison the eve of being started. There will be 1,000 feet of film news every week. The film will be divided into five hundred feet showing the antics and adventures of Old Doc Yak. the creation of the Tribune cartoonist, Sidney Smith. The remaining five hundred feet will be devoted to current news events in various parts of the world. The first film will be released Monday, June 7. The Central Film Co., Chicago, has charge of the bookings.

The first release of “The Chicago Tribune Animated Weekly, with the Adventures of Old Doc Yak,” was made Monday. June 7. The Tribune cartoonist, Sidney Smith, shows Old Doc Yak in a series of fishing exploits that will force laughter from anything human, except a corpse. The second half of the reel shows scenes of the Sinai social
center, Chicago, the naval training station at Lake Bluff during a thrilling sham battle, crippled children being introduced to the jitney ‘bus, views of Mayor Thompson and Governor Dunne, and also various battleships of the United
States navy. The Tribune Weekly was booked at quite a number of prominent Chicago moving picture theaters on the opening date. The Central Film Co., this city, has charge of the bookings. 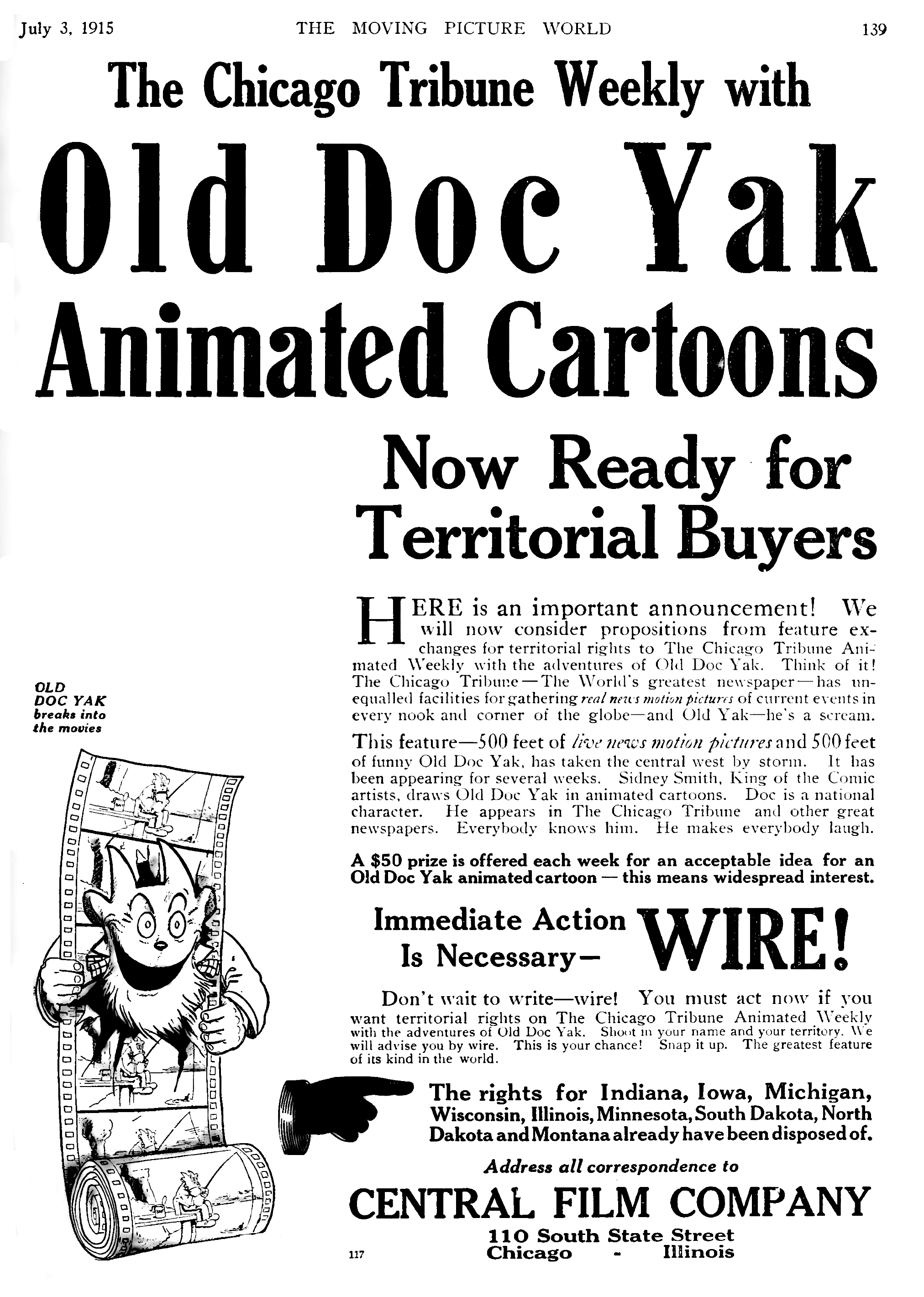 Central Film Company, Chicago, announces that territorial rights on The Chicago Tribune Animated Weekly with Old Doc Yak in animated cartoons, are now being offered to feature exchanges throughout the country. The feature consists of a weekly release of 500 feet of current news pictures gathered by Chicago Tribune photographers in various parts of the world, and 500 feet showing the funny antics of Old Doc Yak, the cartoon character made famous by Sidney Smith, of the Chicago Tribune. It has made a big hit in the central west, where it has been appearing for several weeks. place as the eighth wonder of the world.

Old Doc Yak is a national character. He appears each week in the Chicago Tribune and in other leading newspapers throughout the country. Nearly everybody knows Doc, and everybody who sees him laughs at his side-splitting adventures. Few comic supplement characters in the history of journalism have gained the popularity enjoyed by “Sid” Smith’s Doc Yak, who appeals to children and to grown-ups alike.

Each week a prize of $50 is offered for an idea acceptable for an Old Doc Yak animated cartoon. This is open to everybody. The fame of the Chicago Tribune — The World’ s Greatest Newspaper—is international. The facilities of that stupendous organization, which covers every nook and corner of the globe, are exceptional when it comes to assembling motion photographs of international events of interest.

Spectacular incidents in the great world war, assaults of the Germans, counter attacks of the Allies, the great campaign
in the Dardanelles, uprisings in India, riots in Singapore, sensational scenes from South Africa, and important happenings in the United States, are some of the assignments of Tribune camera men.

The Central Film Company. 110 South State street, Chicago, has made every preparation to meet the demands of the feature exchanges and of individuals who may desire territorial rights to this fine new feature.