William Gillette is conferring with A. Conan Doyle about the dramatization of “Sherlock Holmes,” varying labor with Continental jaunts. 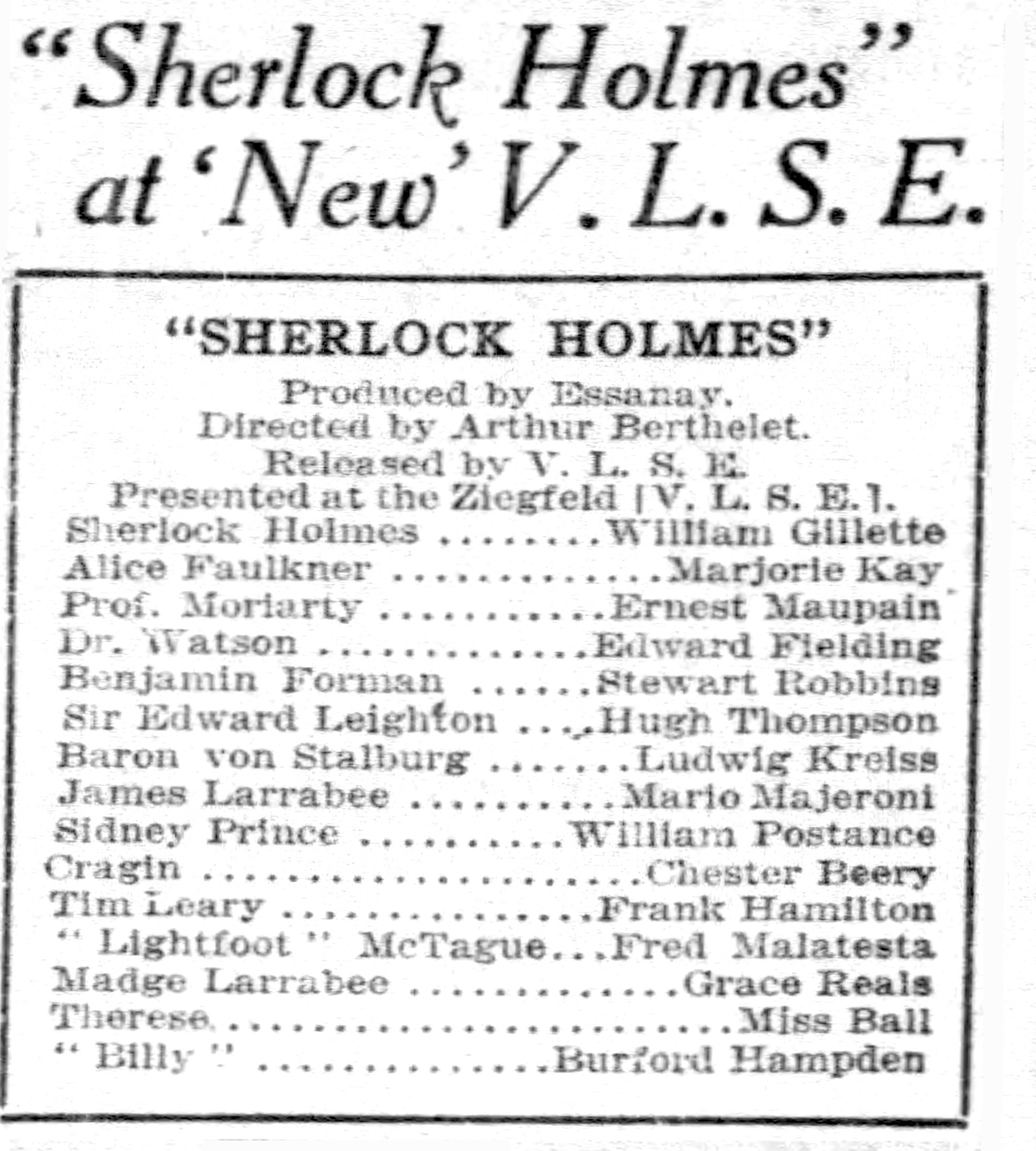 V.L.S.E. is now at home, officially and two-bitly, up on Michigan where the red lights twinkle forth the new label in place of the familiar “Ziegfeld.”

The picture now present on the screen is one that has been long awaited—”Sherlock Holmes,” with William Gillette, made by Essanay this spring. It is a production to which Essanay may point with pride and may file away in the strong box for future and again future revival. For it is a preservative of the Gillette personality.

The sum of it is the actor’s unexcited conquest of situations; his never failing meeting of emergencies keenly, shrewdly, unruffledly—just a bit before his opponent; his calm whimsicalness which made him an island of peace forever in a whirlpool of excitement.

The incidents where Gillette shines are brilliant spots, and there are many, but one is inclined to feel that there is too much settling between them. In fact, the question intermittently pops up—”Aren’t seven or more reels two many?” This reviewer votes that they are, except in very exceptional cases, so exceptional in fact that they haven’t been seen in one notable exception which ran most of last year in the loop.1

“Sherlock Holmes” is very well staged, and well photographed. In some spots it seems to lack finesse, but in others it is as near perfect as a player of personality and a good director could make it. Frankly, I think it dragged here and there between episodes. There is throughout splendid mystery, but the tension settles down sometimes in the preparation for episodes, which may often be very pertinent but which eludes the observer.

I understand there is an ideal of some kind about the fewer sub-titles are good, I count them one of the joys of pictures. I missed sub-titles, especially in the first part of “Sherlock Holmes” where there appears to be much talking, the nature of which was unrevealed to the observers. Considering the quality of Gillette himself, a deal of whimsicalness was lost to print there.

The spirit of mystery walks, and sometimes it quite gives one gooseflesh, as the pirate remarked in “Treasure Island.” There are times when it does look as if the villains had it all on their side, and the dear public is quite in the dark as tow whatever id going to happen—and then Mr. Gillette and his inimitable sang froid and his cane, or occasionally his pistol, or maybe lit cigar, suddenly executes a daring coup, and there they are, the villains —all confounded.

It is a thoroughly interesting affair—except in some of the fillings—a solid memorial of the art of one of the country’s loved actors. One other player stands out with Gillette in his work, in a role not so subtly tinged with personality, but forceful and convincing—Ernest Maupain in the playing of Moriarty, prince of crooks.

The entire 116 minute restored film of the 1916 Essanay film of Sherlocks Holmes. Filmed in Chicago. The entire film was tinted to simulate color, blue for outdoor scenes and gold for indoor.

INCREASED production is the keynote of the policy at the Vitagraph studio, according to Albert E. Smith, president of the Vitagraph-Lubin-Selig-Essanay Motion Picture Company, incorporated in Albany, N. Y., on April 5 for $500,000 and now in operation. Mr. Smith recently said that, in addition to the Blue Ribbon Features to be handled through the new combine, the present plans call for a second weekly feature to be released on the regu1ar General Film program, beginning in September.

The “V-L-S-E,” as regarded by its president, is destined to fill a need in the distribution of multiple-reel pictures that never could be met by the General Film, constituted in all of its exchange mechanism for the handling of a regular program. “Experience seems to show,” he said, “that in selecting features, exhibitors do not take kindly to the system that does very well for the circulation of short subjects. The ‘V-L-S-E,’ with some twenty branches scattered throughout the country and chains of secondary ofhces allied with the main centers of distribution, should give just the outlet all of us have wanted for some time. The new combination is in no way a criticism of the General Film; rather it is a modern means of meeting modern film conditions. Each of the four producers concerned will release one picture a month until September, when the output will be doubled. The branch offices should not be. confused with exchanges, for this is in no way an exchange proposition and exhibitors will not be hampered by exacting contracts.”

Speaking of the place that Vitagraph films may be expected to occupy in the feature market, Mr. Smith said that for the first time in the history of the company, stage stars and stage plays will figure prominently in the productions. “There is no question about the present demand for picturizations of plays and screen appearances of celebrated actors, and up to date it has not been adequately met, because most of the feature producers have lacked the experience needed to make a satisfying photoplay adaptation. Anybody can take a stage success, work it over into some sort of scenario and employ a star; but there is no guarantee that the result will at all approximate the original. We have had sixteen years’ experience in telling stories on the screen and with all due modesty, I think we know how it should be done, better, perhaps, than men who are new at the game.”

Mr. Smith places considerable reliance on the judgment of his scenario editors in selecting plays with screen possibilities, in contrast to those almost entirely dependent upon dialogue, and he is certain of the ability of bis directors when it comes to the details of the actual production. Most of the films will run five or six reels. As for the facilities at the Vitagraph plant, they are ample for all of the projects now underway.

Despite his interest in the present movement, Mr. Smith has not changed his opinion about the permanent demand for one and two reel subjects as the rock foundation of the industry. In support of his belief he points to the European market where the pendulum has swung from short to long photoplays and back again to the brief stories. He believes, however, that in this country there is plenty of room for both and the aim of the Vitagraph will be to produce the best in short as well as extended photoplays.

The position of Siegmund Lubin, vice-president of the “V-L-S-E,” is explained in this fashion by General Manager Ira M. Lowry: “We are pledged to produce the highest quality of feature film and these features, which will run from four thousand feet upwards will surpass anything that has been made in the past. For some time we have been studying the demands of the public and we have arranged our plans accordingly. It’s impossible to place too much emphasis on the type of production we intend to release. Neither time nor money will be spared in making each picture a masterpiece and it will be possible for the exhibitor to obtain these at moderate prices. Already offices have been opened in New York, Chicago, Kansas City, Salt Lake City, Portland, San Francisco, Los Angeles, Dallas, Atlanta, Boston, Philadelphia, Columbus and other cities. More will follow that we may be in direct touch with all exhibitors.

We have an imposing array of features on our shelves at the present time whereas important productions now in the making, or soon to be produced are ‘The Light Eternal,’ by M. V. Merle; ‘Mrs. Dane’s Defense,’ by Henry Arthur Jones; ‘The Great Divide,’ by William Vaughn Moody; ‘The Woman in the Case,’ ‘The Truth’ and ‘Captain Jinks,’ by Clyde Fitch. In every picture a prominent star will be featured and supported by the strongest cast obtainable.” 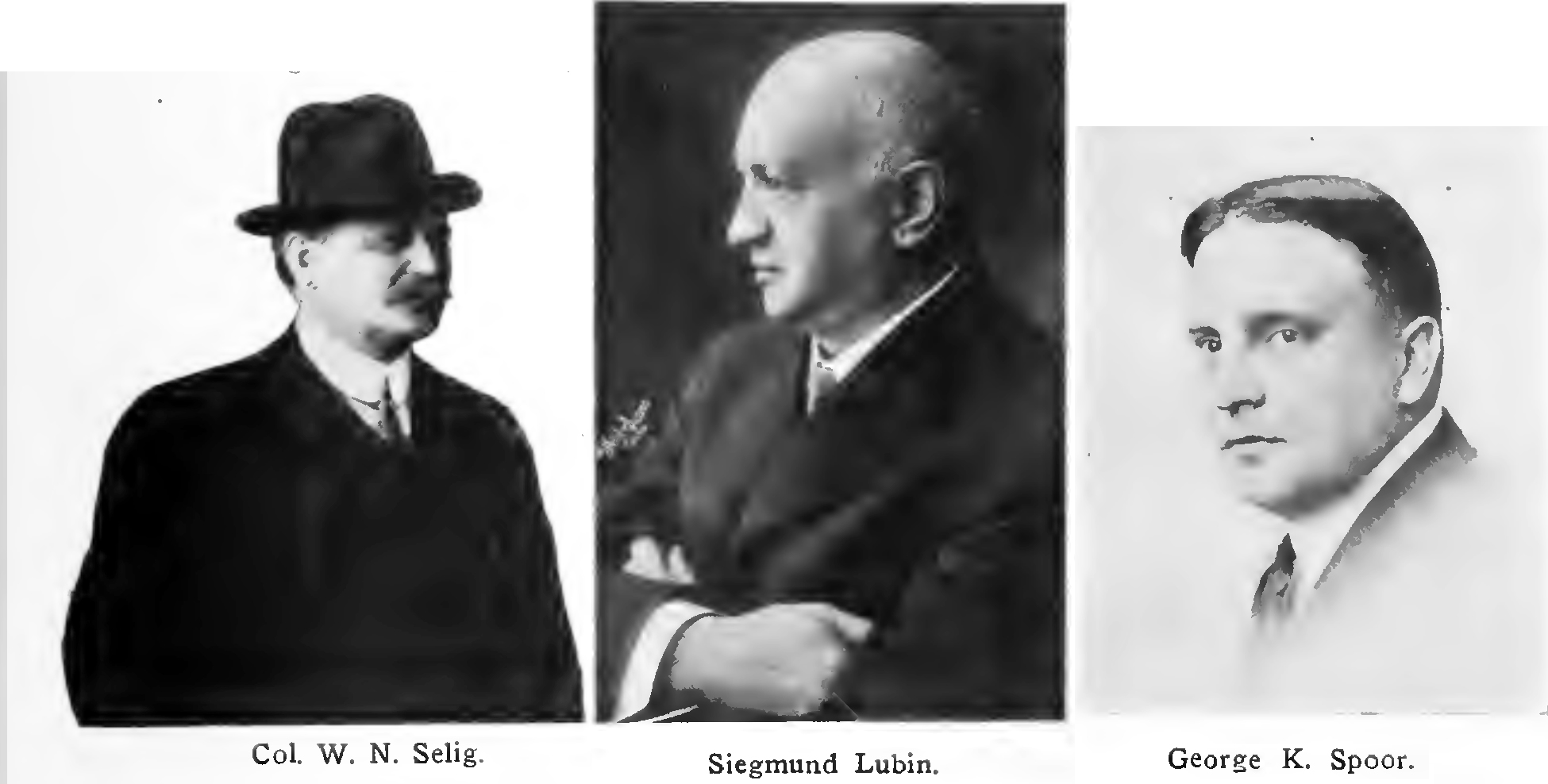 William N. Selig, treasurer of the new concern, said when interviewed a few days ago: “The question of proper distributing channels for the move elaborate motion picture plays has been puzzling manufacturers for some time. We believe it has been satisfactorily settled for all concerned and especially for the exhibitor, who now will be permitted to select this own feature program direct. For many months the Selig Company has been engaged in the production of ‘Spectacular Specials,’ a name we have coined for photoplays of five or more reels. Strong stories, convincing acting, clear photography and correct scenic backgrounds are essentials in any pretentious picture and we believe that our forthcoming releases contain all of these qualifications.

“Harold MacGrath’s novel, ‘The Carpet From Bagdad,’ selected for our first release, is to my mmd an unusually beautiful photoplay. It contains the atmosphere of the Orient, an exceptional plot and the sandstorm in the desert, I think, will be found to be very realistic. I also look for great things from Edward E. Rose’s drama, ‘The Rosary,’ which should prove appealing as well as entertaining. Kathlyn Williams and other well known players of our western stock companies appear in both of these productions. Then in due time we will issue Anna Katherine Green s ‘The Millionaire Baby,’ Charles Hoyt’s ‘A Texas Steer,’ Rex Beach’s ‘The Ne’er-Do-Well’ and other subjects of an equally interesting character.”

Essanay is represented among the officers ot the V-L-S-E by George K. Spoor, who was elected secretary. To start the ball rolling, the Essanay Company has three excellent productions ready for exhibitors—George Ade’s “The Slim Princess,” with Francis X. Bushman and Ruth Stonehouse in the principal parts; “Graustark,” by George Barr McCutcheon, in which Mr. Bushman and Beverly Bayne are featured, and “The Crimson Wing,” in six reels, featuring F.H. Calvert. Miss Bayne and Ruth Stonehouse.

The policy of adapting stage successes and popular novels will be followed in coming productions, which include Viola Allen in “The White Sister;” Raymond Hitchcock’s starring vehicle “The Yankee Consul;” “The Prince of Graustark, from McCutcheon’s novel. “A Bunch of Keys;” Charles Hoyt’s “A Tin Soldier;” “The Aviator,” by James Montgomery; “The Lost Paradise,” by Arnold Ktimmer, and Robert Hilliard’s “Lost Twenty-four Hours.”

Initials, which have been flying around loose since the dissolution of V.L.S.E, are assembling themselves in other groups now. The latest is the Kleine-Edison-Selig-Essanay service, which will distribute the films of the respective producing companies on the open booking plan.

The twenty-three Kleine distributing offices will be utilized in this service, which will have also all of the Selig and Essanay features previously released through V.L.S.E. channels.

The new move goes into effect on Saturday, the 16th. This is a union of four of the oldest producing companies in filmland—and it is three-quarters and a little more a Chicago deal for George Kleine, George K. Spoor, and William N. Selig are Chicago picture men.

The releases are to be from five to eight reels, made as inspiration dictates, not schedule dates require.

“We have all felt the pressure of this program production,” said Mr. Kleiune last night, “and now we are coming through this arrangement to more moderate procedure. I shall only make a few specialties myself, giving them plenty of time and care.”

Mr. Spoor has announced that the aim of the company will be quality, not quantity, and Mr. Selig is also planning some specialties.”

1 Each 35mm reel contained 1,000 feet and ran about 8-10 minutes, varied due to camera operator’s decision to slow or speed up the film. In the mid-teens, most movie houses had either one 2,000 foot projector or at least two 1,000 foot projectors. The operator would splice the two 1,000 footers onto a sturdier “house reel” rather than the sometimes flimsy and bent-up shipping reels. Reel changes were made at a title frame.