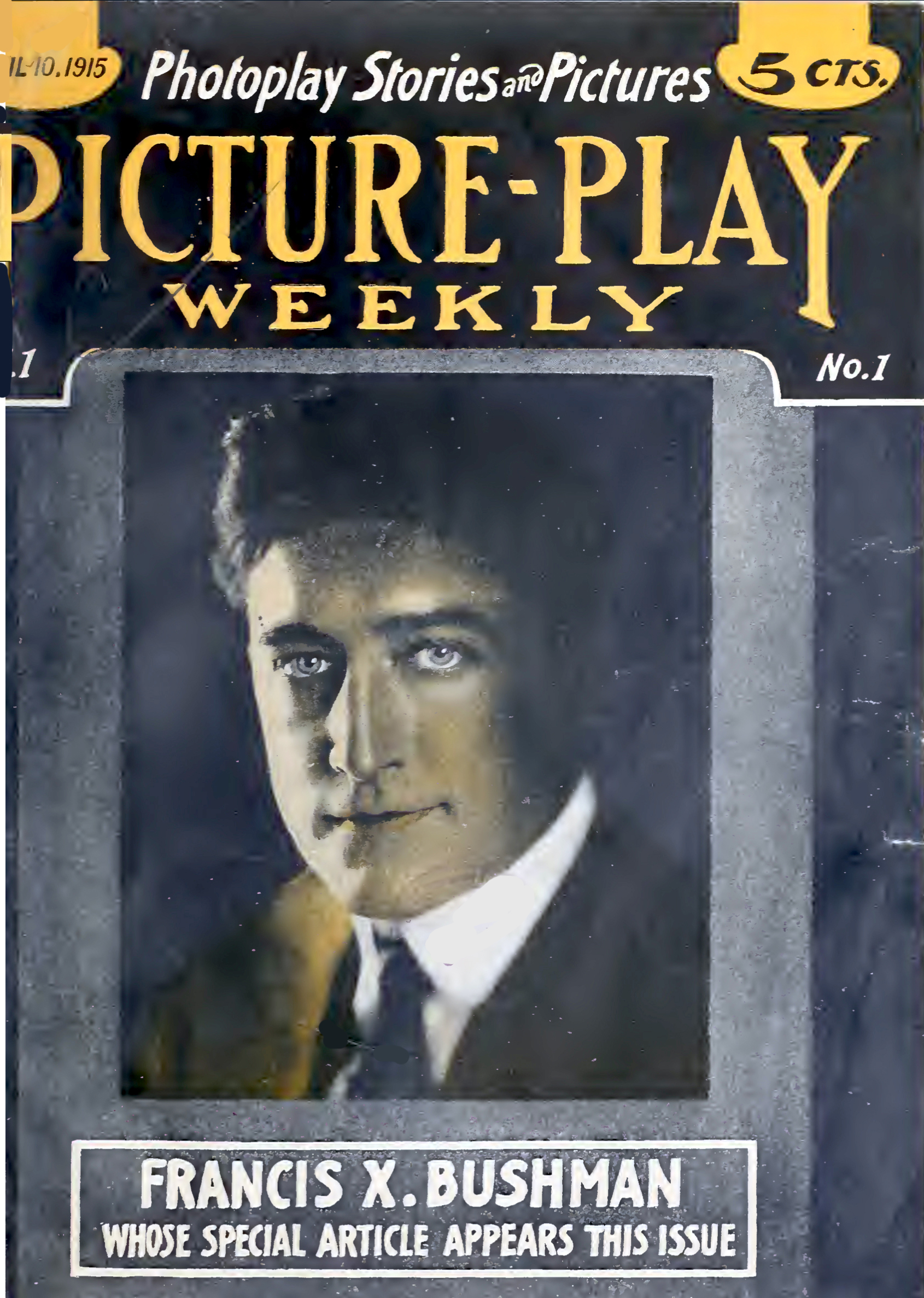 TELL us something about the inside working of the studio?”

That request comes to me on an average of fifty times a day. There was a time when everything in connection with a motion-picture studio was enshrouded in the deepest mystery. But during the past year the public have become so interested and so loud in their demands for enlightenment, that this subject has furnished considerable material for both the newspaper and
magazine writer

I receive about two thousand letters a week, and I am glad to be able to add something of my personal ideas on a subject that is so far-reaching. I hope that my words will carry a message to these people who nightly compose the audience of the motion-picture rater. This article is in a way a tribute to the thousands who, by their friendship and enthusiastic approval, made it possible for this industry to grow to its present magnitude.

But to go on to the true subject of article: the inside working of a motion-picture studio. Many of the companies have daylight studios, are dependent upon sunshine for the success of their products. The Essanay Company have a peculiar, and, I think, unusual lighting method. They use the Peter Cooper Hewitt mercury-vapor lights, which are very rich in light rays. The candle power approximates nearly two hundred thousand makes it possible to work at night or on a dark, cloudy day. They are very powerful, and fill the person seeing them for the first time with wonder and awe.

A laughable incident occurred not long ago on the studio floor. A sick scene was in progress, and so death-like was the pallor of the pretended sick woman, that a guest at the studio made a wild dash for water, and exclaimed, in an excited manner:

The lights had cast a queer purplish reflection over the surroundings, making the actress look really ill. The director had a few things to say, however, to the young woman who interrupted his big dramatic scene. Naturally, she could not see her own countenance, which had that same purplish tinge. 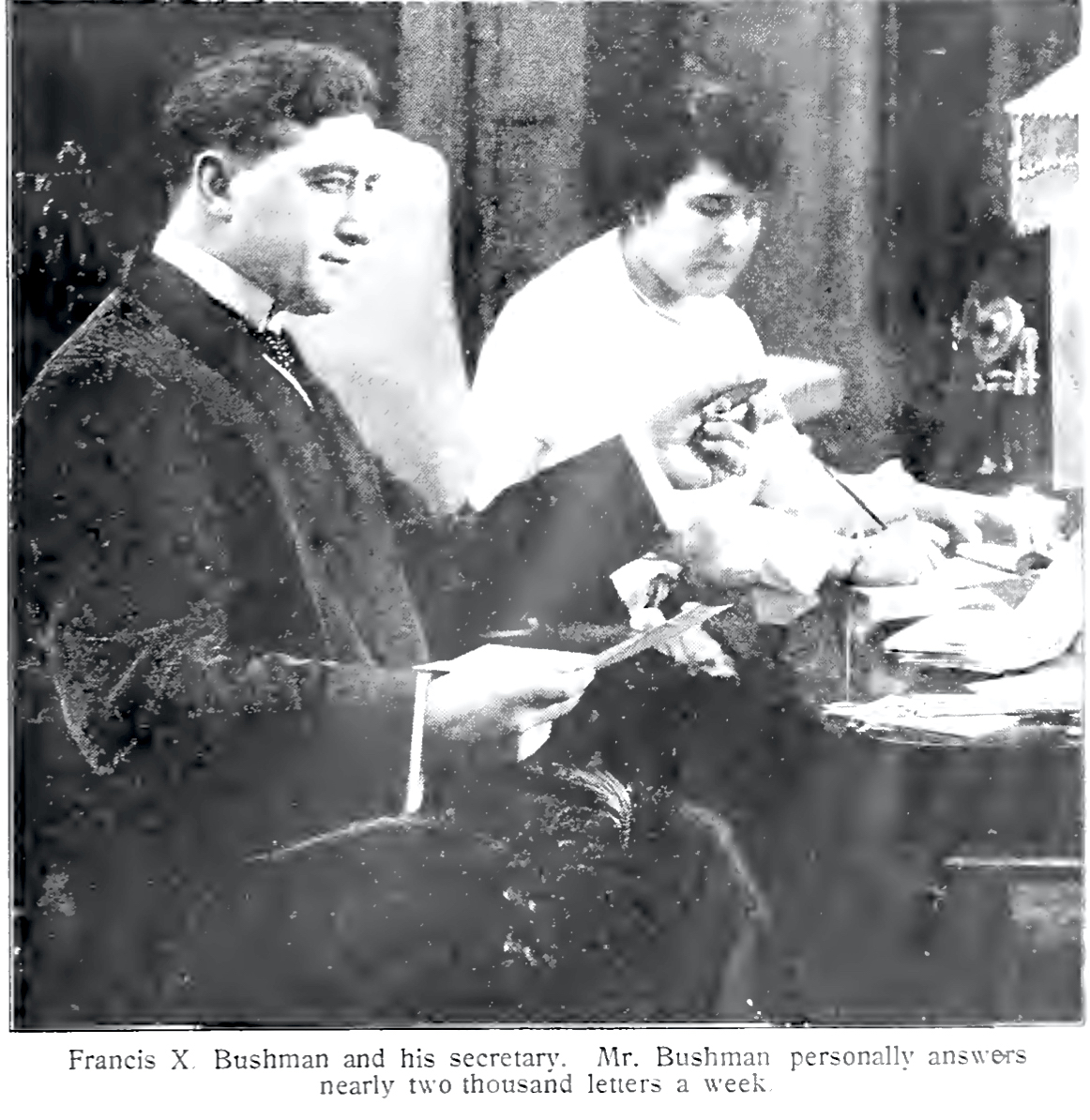 Many amusing letters come to me. asking: ”How did you get the inside of such a beautiful home for your picture?”

We never use the interior of any home, poor or rich, for our scenes. All inside rooms and scenes are produced on the floor of our studio. The working line averages six feet or less in width. It looks very small to the observer, especially after we see the prospective effect, showing great, spacious rooms in the completed picture.

Each room is arranged with the utmost care. The homes of the connoisseur are studied carefully with a view to making them as elegant and artistic as possible. The shabby, worn-out tenement rooms must have furniture in keeping with the circumstances of its inhabitants. The costumes and atmos- phere must be correct. Customs of different historical periods are made a subject of the greatest moment.

The man in charge of securing the proper furnishing is some one who has the decorative faculty highly trained and developed. Every studio has a property room, but this does not always contain the necessary furnishing for a special feature.

Many of my correspondents have been greatly interested in “The Private Officer.” in which I appear in the dual role in this picture, both as Lieutenant Frothingham, the villain, and Private Lambert, the hero. It is, I admit, rather startling to see the same man appear simultaneously on the screen. This was done by masking one side of the camera, taking one side of the picture; then turning back and masking the other side, and taking the opposite side. In this picture the work progressed very slowly. I had to change my clothes twice for every scene and was so worn out, and my valet was so tired, that we both vowed we were through with double exposures for life. I changed my clothes something like twenty-five times that day. I had to wear different clothes in every scene, and also effect entirely different make-up. In the villain part, I appeared with my hair brushed back from my forehead and my face smooth shaven. In the reverse character I wore my hair parted and a small mustache. This picture has been the mystery of the age, for the layman cannot understand how the same character can appear twice in one scene. The accompanying illustration will show I did try to make myself look different. 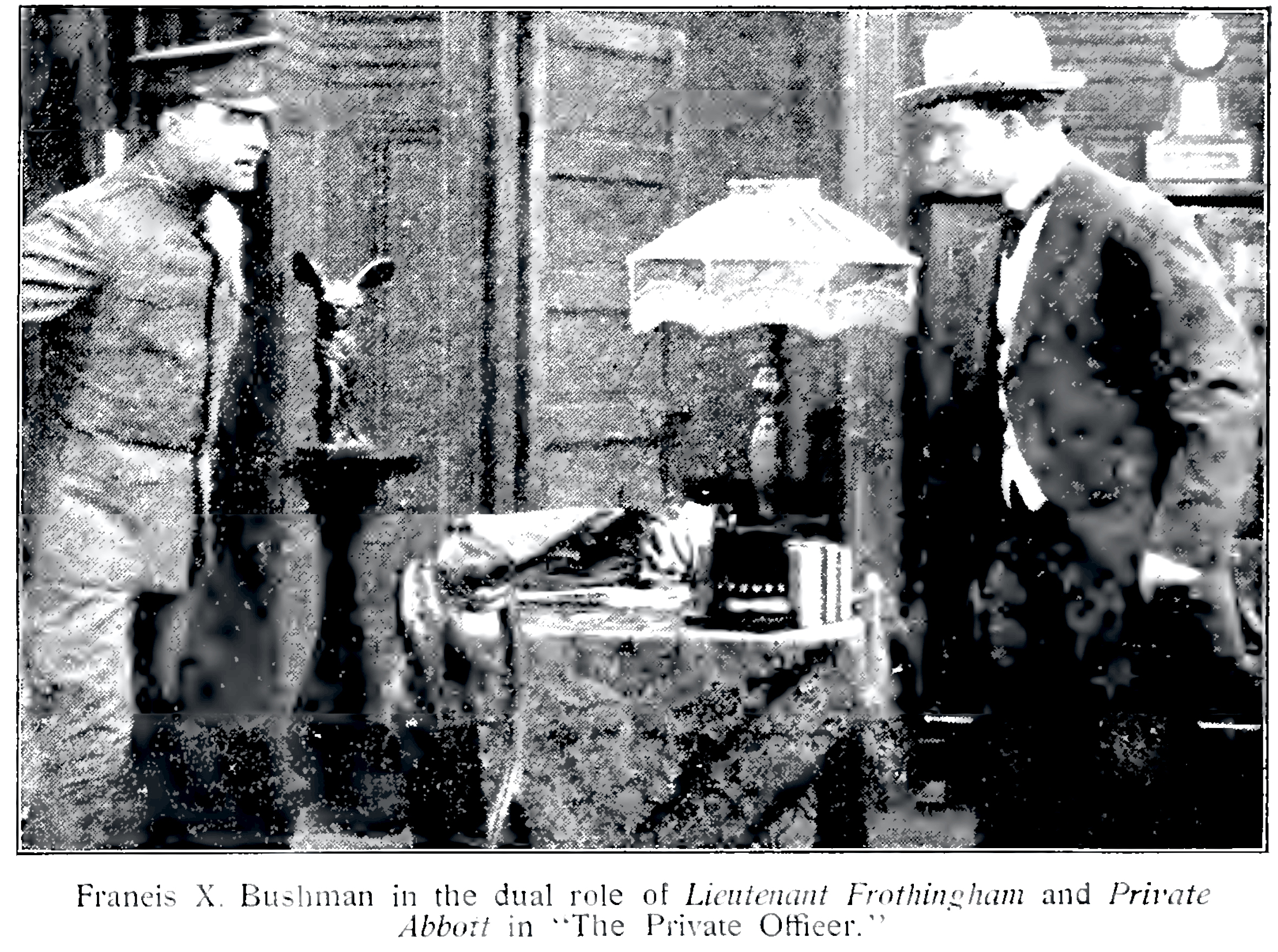 I have come to the conclusion that and women are simply grown children, and that romance and fairy tales appeal to hem more than any other class of story. I appeared in the role a crown prince in “Under Royal Patronage” some few months ago, and since that time I have received hundreds and hundreds of letters begging to act in another picture in which I could wear brass buttons and gold braid. Personally, a virile story with a stronger plot is more to my liking, but I have discovered that a deeper plot does not contain one-half the appeal that a pretty, romantic-hero tale does. My greatest success has been made in hero characters. “Graustark,” the famous McCutcheon novel, will soon be ready for public approval, and in this we have given the fans a taste of what they so insistently demand.

In “Scars of Possession” we had a real surgeon superintend the transfusion of blood operation. It was so real that wee all felt a thrill of horror when the man of science appeared with his glistening scalpeL

Among my correspondents, I have newspaper writers, judges, and doctors. One letter I have cherished came from well-known doctor in the South. Some few months ago we put out a picture called “The Elder Brother.” This was the tale of the dope fiend. A patient of the doctor’s saw the picture, it made such a vivid impression on h:s mind, that it lead to his reform. 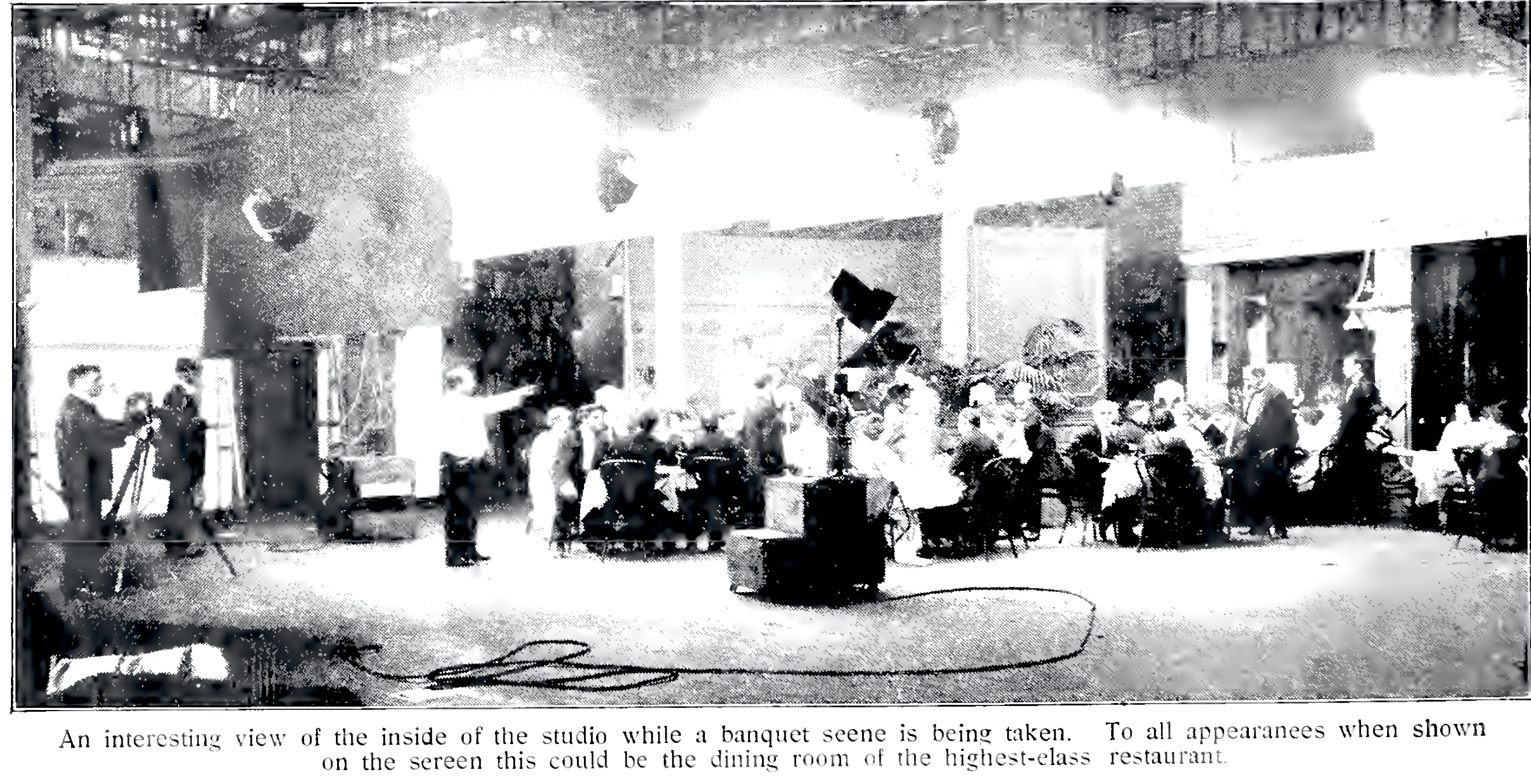 The old-time matinèe idol seems to have given way to the newer picture hero. The warm-hearted, appreciative American public, since the days of Barett and Booth, up to the present time, have delighted to honor the man or woman of whom they approve. It is only too true that the career of every public man lies right in the hollow of the people’s hands. They can make him just as easily as they can put the stamp of their disapproval upon him and mark him a dismal failure. The star in filmdom is different from the legitimate actor. He comes closer to the people.

Perhaps you will take exception to this statement. How can a man whom we never see, save on the screen, come as close to the hearts of the public as the actor who plays before the footlights in person and speaks his way into our affections?

For the reason that the public see him oftener and learn to know him better. They see him magnified, and watch for every change in his facial expression. They see him depict so many emotions that he grows near and dear to them.

The productions have improved both in quality and quantity, until many of the scenarios put on the screen are masterpieces. Not only is this true of original scenarios given to the public, but also of the successful plays and books that are being picturized.

I have had one thing brought most forcibly to my mind, and that is. the people are responsible for the class of pictures turned out by the studio. Just so long as they cry for the lurid melodrama and find pleasure in the screaming posters, just so long will the film manufacturer continue to supply that very kind of production, I speak from knowledge, for the bulk of my mail comes from people who are watching me on the screen, and who have learned to know my every facial expression, They write and tell me the innermost secrets of their very souls.

I am in a position to judge as to what they desire. We are glad to say, however, that many of the people are being educated up to better subjects and to a higher class of literature, through the medimn of the motion picture. Some of the people to whom history, mythology, art, and literature were as foreign as the Greek language, have learned to know something about each one of these subjects. The photo plays have stimulated an interest in these subjects, as it were.

In view of this pleasant fact, I do not wish to be quoted as saying that the majority of the people are demanding cheap melodrama, but I do say that many of the people who compose the picture audience find greater pleasure in a stirring detective story or in a thrilling “mellerdramer” than in the best classic or strongest problem drama ever pre- sented on the screen.

It is but natural that people wish to see something of a life that varies from the monotony of their own.

For instance, Susie Smith, who is slaving in a department store at six dollars and fifty cents a week, finds the stories on the screen the most absorbing daydream that can enter into her otherwise colorless life. She is interested in the society pictures from every point of view. She watches, with bated breath, the big ball given by Mrs. van de Water; Mrs. de Smythe’s jewels are something to dream about. On the other hand, the people who are comfortably housed and fed and whose bank account is worth considering, find the acting, the sets, and the entire productions relating to the poorer classes of people who do not enjoy such luxuries, of the utmost interest.

I wish that I could emphasize just how important I feel the moral side of the pictures is in the ultimate betterment of social conditions. Aside from the educational point of view; aside from the amusement offered, or for any other reason that might impress on our minds the value of the motion picture the lesions to be learned; the influences brought to bear; in fact, the entire moral uplift, is of startling importance. The motion picture is even more potent than the sermons preached by the greatest reformers of the day. It has done more to bring the wayward girl and the badly brought-up boy into the right way of living than any other one thing in all the world.

I speak from all the mass of mail that I am daily receiving. I get letters from every walk of life, so that I feel I can truthfully say that from the confidences given me, pictures will soon be recognized as the greatest dramatic medium, educator, entertainer, and, above all, the most important influence for good of the present age.

SOMETHING ABOUT MR. BUSHMAN.

Francis X. Bushman’s advent into motion pictures, and his rise to the most popular and favorite play of the time, are interesting to know.

For several years, when a young man, Mr. Bushman studied sculpturing under Isadore Conte, in New York, and besides working with the clay himself, w used as a model to considerable extent After some time an opportunity came to him to go on the stage, and Mr. Bushman grasped the chance, dropping his work as a sculptor.

It was not long before he was leading man in a stock company, which position he held for several years, going from that to a road company. Here he played in many big productions until three years ago. At that time the Essanay Company made him an offer which he accepted, and now, at the end of those three years, he feels that has reached the top. To verify that when the public was asked for a vote as to the most popular player, their choice was Francis X. Bushman.