Despite the fact that there are many “Electric” moving picture theaters, the business is not fundamentally electrical. But the use of electric arc lamps for projection, electric motors for ventilation and machine operation, electric signs for advertising, and electric flash lamps for locating the lost end of a film that has slipped out of the machine, have combined to make electricity a controlling factor in the picture theater business. So it is not surprising that the Chicago Electrical Show contained at least a few exhibits of interest to the man in the business. 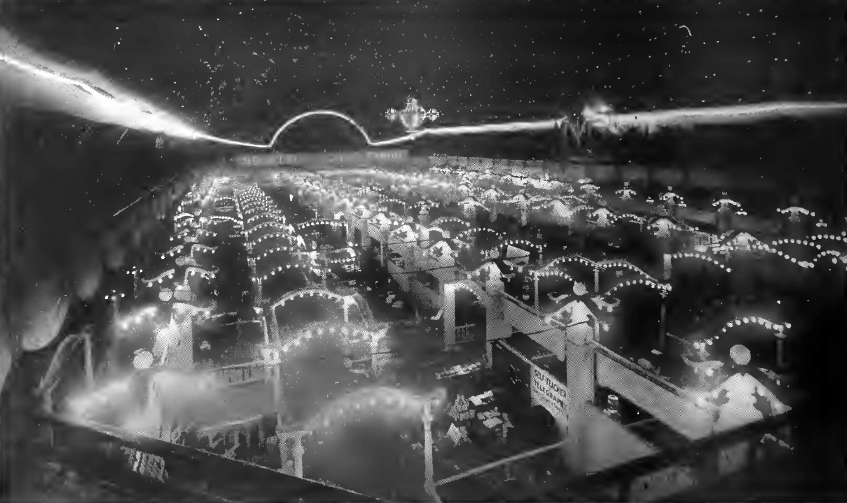 The Chicago Electrical Show for 1909.

Of course the most obviously appropriate exhibit from the moving picture man’s poiiit of view was the biograph room of the United States naval display. The whole of the big Coliseum Annex, just south of and opening into the main building, was given over to the use of the government and devoted to exploiting life in the navy, a whole battleship, the “Electra,” being reproduced with its full equipment. The biograph room was in one corner of the Annex, merely a portion curtained off and provided with a screen at one end and a projecting machine and stereopticon at the other. Chairs were provided to seat about 150; and shows were given every half hour or so during afternoon and evening for the full two weeks of the electrical show.

The moving pictures were shown only in the evening, the afternoons being devoted to lantern slides featuring the variety of “gay life” enjoyed by the boys of the navy. After dinner the moving picture machine was started by a sailor boy and the audience beheld moving pictures of the Atlantic fleet on its famous cruise around the world, also many views on land and sea taken from the battleships.

Away up at the other end of the Coliseum was the big group exhibit of apparatus using electric power, current being furnished by the Chicago Commonwealth Edison Company. Near the center of the group, where the crowd gathering thickest indicated some unusual attraction, was a Viascope machine, driven by a small electric motor. The pictures, instead of being projected on a large screen, were thrown upon a ground glass plate, not over a foot square, such as is used in focusing a camera. Naturally, this plate was only a few feet in front of the lens of the machine ; and the moving pictures, thus sharply concentrated and highly illuminated, were constantly viewed by great numbers.

At the booth of the Fort Wayne Electric Works a Motiograph machine was used in connection with the exhibition of the Compensarc manufactured by the company. An interesting demonstration of the current-saving properties of this device was made for the edification of interested visitors. An ammeter and a wattmeter were connected in circuit with the arc of the machine, and a double-throw switch allowed either an ordinary rheostat or a Compensarc to be thrown into the circuit at pleasure. With the ammeter reading 40 amperes, a common operating figure, the wattmeter showed a greatly reduced reading when the Compensarc was used, no difference in the operation of the machine being discernable. The device is intended for use with alternating current.

The Murphy Electric Rectifier is another means of transforming alternating into direct current for moving picture machines and other purposes, which was exhibited at the show. It is a mechanical contrivance.

Arc light carbons, an important part of the moving picture and stereopticon apparatus, were shown by the National Carbon Company. A new carbon designed especially for moving picture machine arc lamps was a feature of the display. The company also showed a line of pocket electric flash lamps, whose many uses in the picture theater and operating booth need not be described.

In the field of electric signs there were many exhibits. The Pyro One-Light Electric Sign Company displayed an interesting assortment of signs of the kind more or less familiar to most picture theater people. The feature of this advertising sign is the large amount of illuminated surface which is secured with the use of but one incandescent lamp.

The Autoelectric Sign Company made an exhibition of its color-changing art glass signs. This company makes a special picture theater sign which is quite pleasing.

The Neville illuminating sign is another advertising attraction which has entered the picture theater field with some pleasing designs.

The American Automatic Advertising Company displayed some interesting illuminated advertising devices, including a so-called moving picture machine, which consists of a revolving wheel whose periphery is occupied by advertising slides which are projected by means of an electric light.

The Attractograph Company exhibited a series of its “Rainbow” and “Dissolving” signs, by means of which very attractive results are secured.

The exhibit of the Federal Electric Company included an excellent line of electric signs, many of which are suitable for the use of picture theaters.

The big exhibit of the General Electric Company included its mercury arc rectifier for changing alternating to direct current for use in moving picture arc lamps. The use of this device in connection with alternating current service and a direct current arc lamp results in securing the good features of both kinds of current. 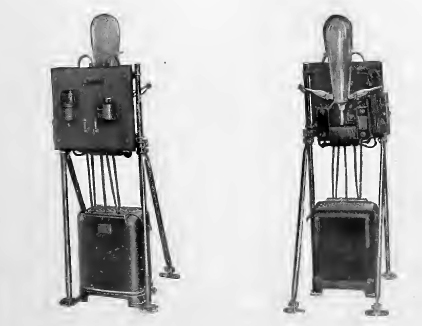 The exhibits of electric motors naturally formed a large portion of the show, and it is impossible even to mention all the types shown which are suitable to either projecting machine operation or theater ventilation. The announcements of some of the makers may be found in the advertising columns of The Nickelodeon.