As early as 1917 Chicago’s Bell & Howell Company began experimenting with a personal motion picture camera. They built a prototype of a camera which was to use 17.5mm film. The company was invited to view Kodak’s plans for a 16mm film format in 1920 and abandoned its 17.5mm plans to the Kodak format. Kodak introduced the first 16mm format movie camera in 1923, but it was a hand cranked model. Bell & Howell’s camera, the Model 70, used a spring drive motor, was introduced during the spring of 1924. Kodak did not offer a spring drive motor until 1925 (Cine B). Bell & Howell, in 1925, introduced the Eyemo, a handheld 35mm moving picture camera.

It was a cold shivery night in November, 1907, in a small Indiana village … a village undecided as to whether it was to go back to the soil or grow into the industrial beehive which later it became.

On a grimy sheet of canvas against the side of a darkened building there raced the grotesque figures of foreign gentlemen and foreign ladies in a Louis Quinze bedroom set. The clickety-clack of a projection machine rattled down from the second story window across the way. 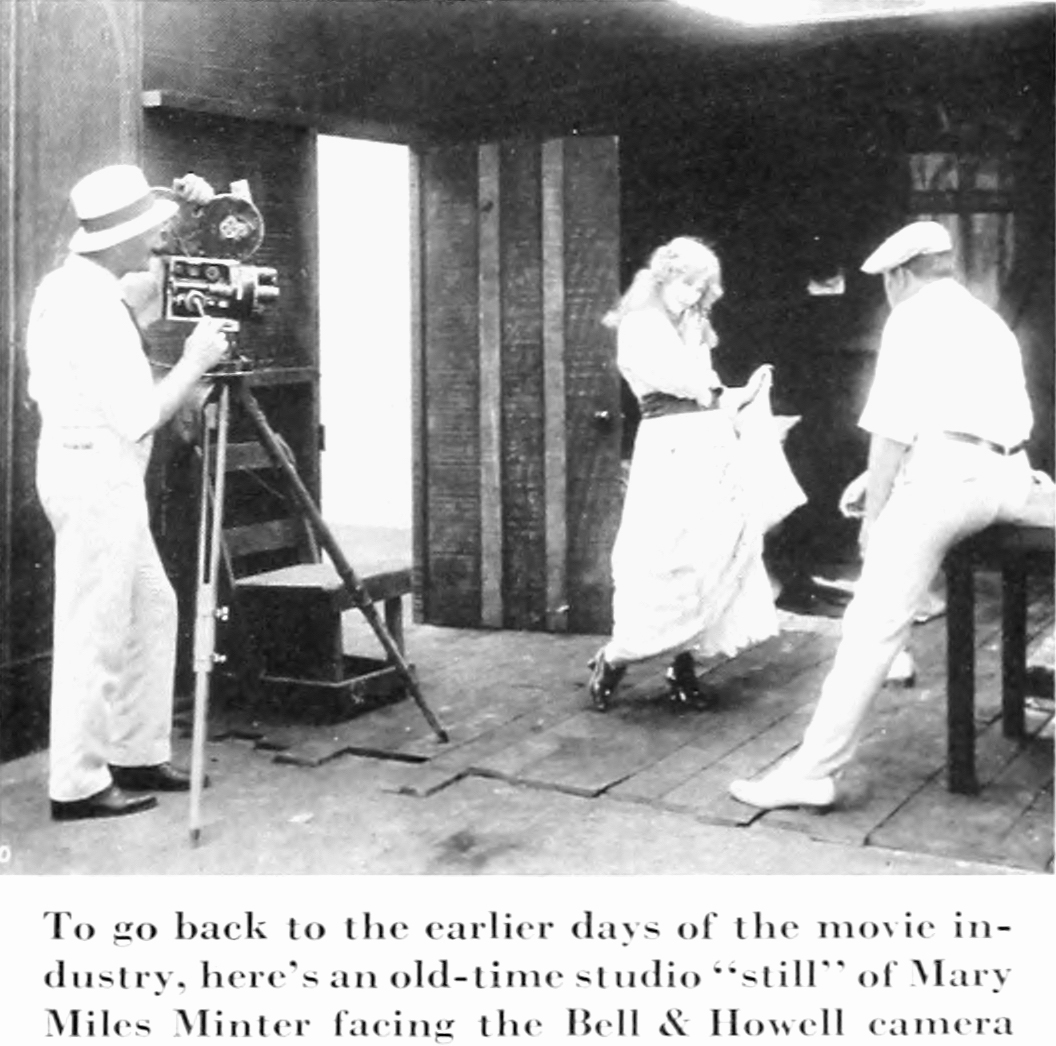 And, what a crowd there was, standing on the cold paving! For as far as fifteen and twenty miles they had driven their rigs to see the pictures. The scenes were strange, the comedy very French, the photography poor, the projection terrific in its flickering and jumping. But we stood there fascinated, and you could not have budged a person in the crows with less than the burning of Rome.

One little slice of provincial America was treating itself to a new amusement. Little did it know the wretchedness of the performance. All it knew was that Life had come to town, new, startling, intoxicating.

We talk of the birth of the airplane at Kittyhawk. the birth of the steamboat up the Hudson, of the telephone and the radio down in New Jersey. But the movies were born in little villages and big villages in every corner of America. where the rapt fascination of the populace inspired a mechanical genius in Chicago to help give the people more of what they wanted, and to improve the movies immeasurably in the process. This genius was Albert S. Howell.

It was just twenty-five years ago that Albert S. Howell and Donald Bell, both of whom had been improving the motion picture projectors of that time, incorporated to operate their own cinemachinery factory.

Then, the embryonic film industry was chaotic. Many were the widths of film, and many were the sizes and the positionings of perforations. A nickelodeon entrepreneur could show, with his particular projector, only films of one standard. The many of other standards could not flicker across his screen. Now, thanks to the standards set by Hell & Howell, the one accepted professional film can be shown in any theater in America. Yes, and in any theater in the world! And shown with a perfection in technique that makes early cinema entertainments seem crude indeed.

Their previous work upon motion picture equipment had made evident to Mr. Howell and Mr. Bell the need for standardization in films. Withe this need always in mind, the Bell & Howell Company built but one type of equipment, that for handling 35 millimeter film with what they found to be the most suitable perforation. Although repeatedly asked to build equipment for handling other film, they maintained their standard. Because of the necessity for B&H machines wherever the highest quality of work was to be done, the adoption of the B&H film standard as that of the entire industry was practically forced.

In 1907, ’08, and ’09 the new company designed and built film perforating machines, firm printing machines, and moving picture cameras, all in accordance with their film standard. Mr. Howell’s design of the film perforator introduced this standard to the industry. The mechanical perfection of this machine gained for those subsequently built acceptance wherever films are made. Bell & Howell perforators are used today in preparing 95% of the world’s films, and are found in film plants throughout the world. 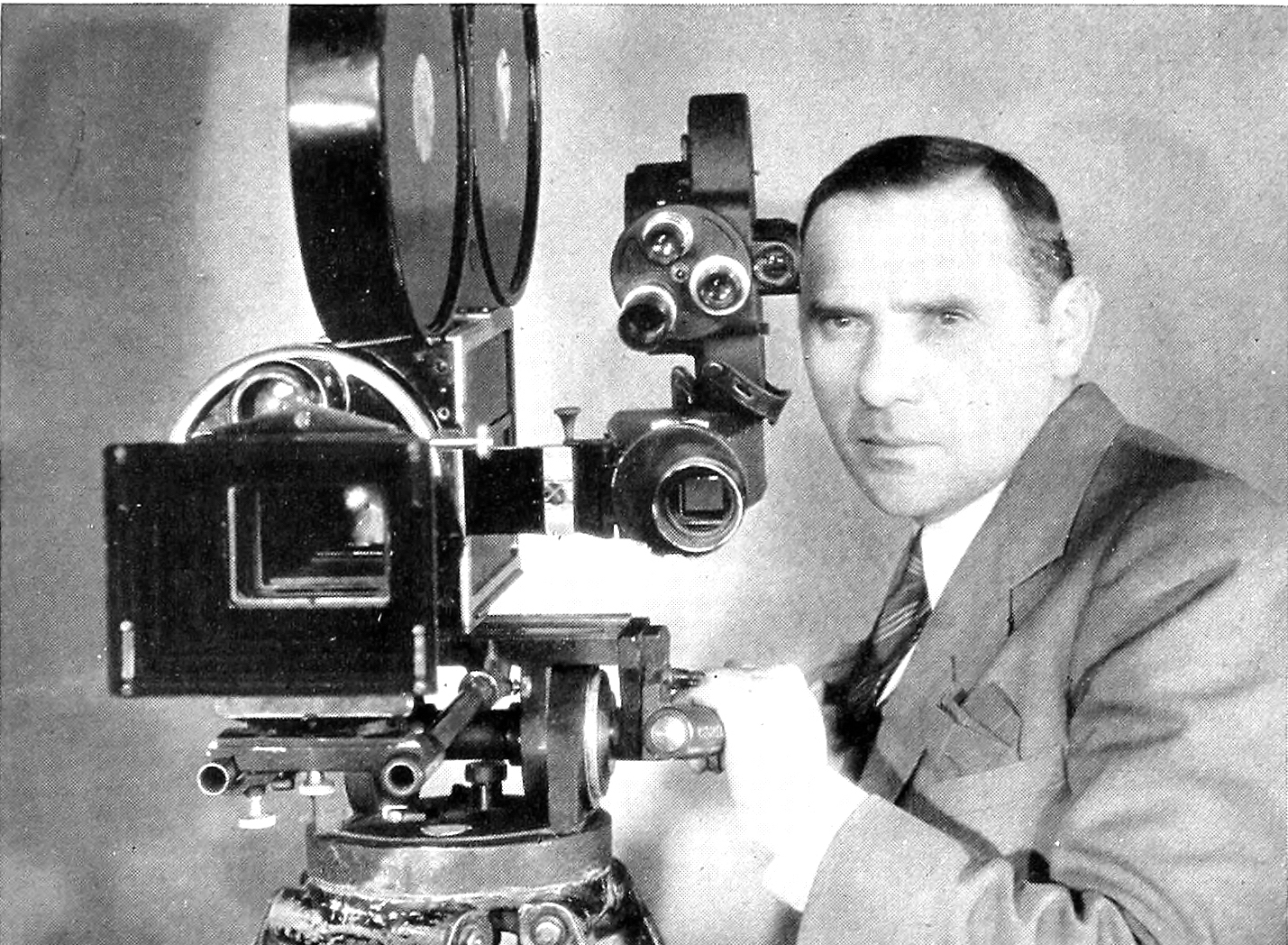 Jackson Rose, the professional cinematographer who is seen at the crank of the early Bell & Howell studio camera in the upper photo on the next page, is pictured here as he often works today, with his personal Filmo mounted beside a modern B & H professional camera.

The first Bell & Howell Standard 35 mm. camera, built in 1909, was admitted to be ten years ahead of its time. It incorporated many then novel conceptions of design which have since become generally used throughout the industry.

Bell & Howell saw room for vast improvement in the process of printing moving picture films. At the time the company was organized, films were printed by the slow process of handling each individual scene separately. Light changes, compensating for varying densities of the negatives, were made by rheostat and by hand. Bell & Howell’s continuous film printer made possible a great reduction in laboratory work, as it was semi-automatically adjusted for varying exposures. Since every laboratory, naturally, was interested in cutting its overhead and increasing production, the B&H printer rapidly achieved the recognition and distribution of the firm’s other products. Today, most of the professional film is printed with this machine—especially since the introduction of sound, with its highly exacting demands of precision.

The years from 1909 to the present saw continual refinement and perfection of equipment used in the professional industry, as well as the production of many new accessories for broadening the field of photographic and laboratory possibilities and the extensive changes in design called for by the introduction and improvement of the talkie. And this year there is being introduced a fully automatic production printer which turns out theater prints much faster and far more economically than any previous machine. What is more important, it makes possible a new superior quality of both picture and sound. 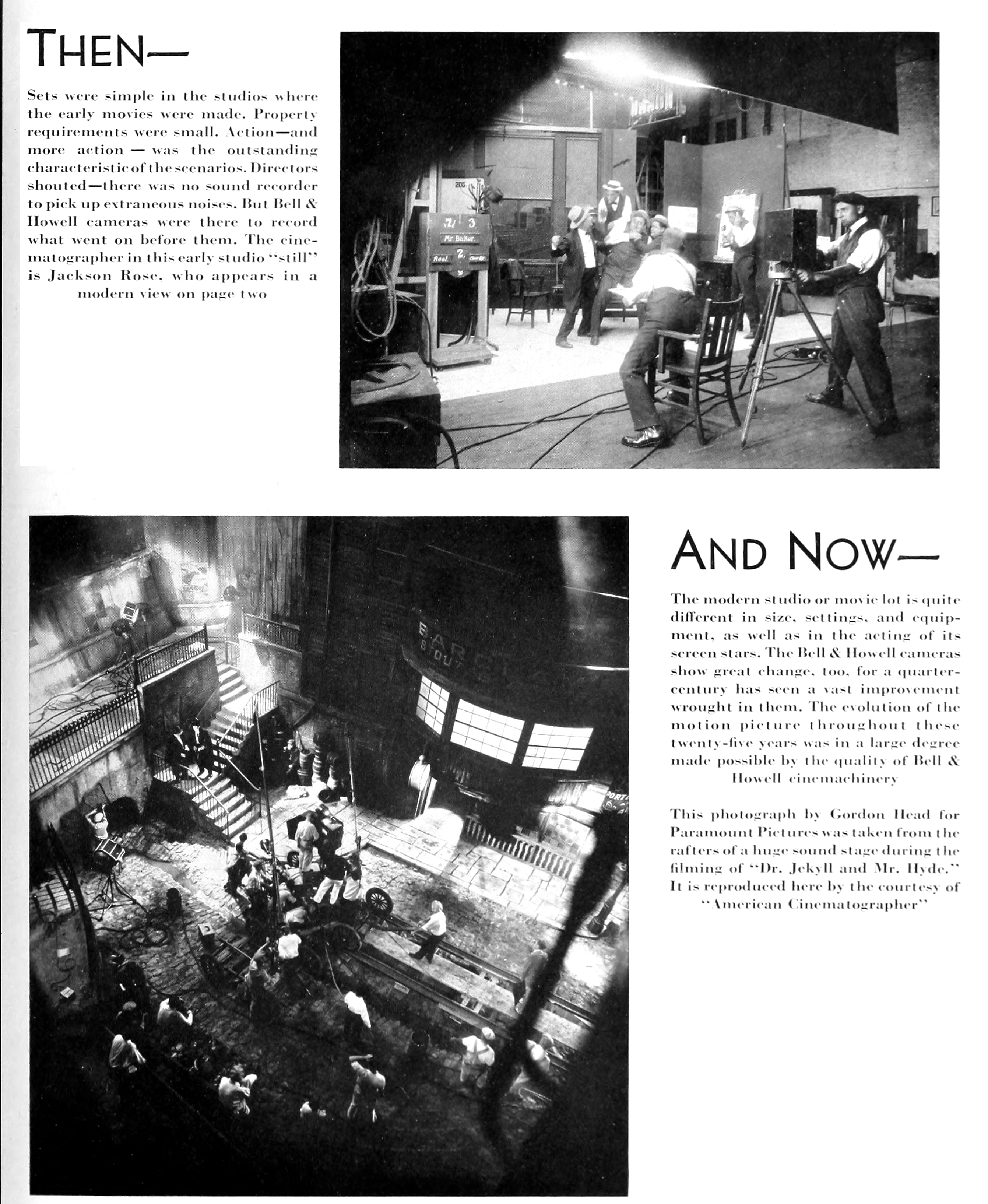 Now let’s go back again to the little village in Indiana where, a quarter century ago, we saw our first movie. It’s a sunny afternoon on a quiet residential street, or it’s a frosty day at the ski-slide. In the hands of the leading citizens, out for sport, are held little mechanisms called Filmo Personal Movie Cameras. What has happened since we left the old home town?

Unsatisfied to stop with giving 15 million people a day a movie show to go to, Bell & Howell has turned the back yard, the golf club, the athletic field, or the deck of a liner into a Hollywood “lot”—has made it not only possible but easy and inexpensive for the individual to take and show his own movies.

It was in 1919 that the idea of personal movie making was conceived. Mr. Bell’s interest in the company had been purchased in 1917 by J. H. McNabb, who at the time was general manager of the company and who is now president. Searching for larger markets, Mr. McNabb and his associates foresaw the great appeal that personal movies would make to the public. Imagine the task which then confronted the chief engineer, Mr. Howell. The proposed camera and projector would have to sell at a figure fitting the individual’s purse. They had to be so simple that anyone could use them. And they had to be so perfect that the amateur could obtain professional results. For was not a high standard of motion picture quality already established in the individual’s mind, directly by the feature plays seen in the theaters, and indirectly by the Bell & Howell Company itself?

Mr. Howell’s inventive ability was brought into play upon this new problem. In 1921, after more than two years of constant application, of work often continued far beyond the average man’s working hours, of trial, redesigning, the trial again, the first Filmo Motion Picture Camera and Projector models were born.

Even after these years of development, the cameras and projectors were not put into production on a large scale until 1922 and 1923 had been devoted to further refinement. But when the Filmo equipment was finally ready to go public it, too, met with the same enthusiastic acceptance as had Mr. Howell’s preceding products. These instruments were designed to use 16 mm. film, which has been accepted as standard for amateur use, just as 35 mm. was accepted as standard for professional purposes. 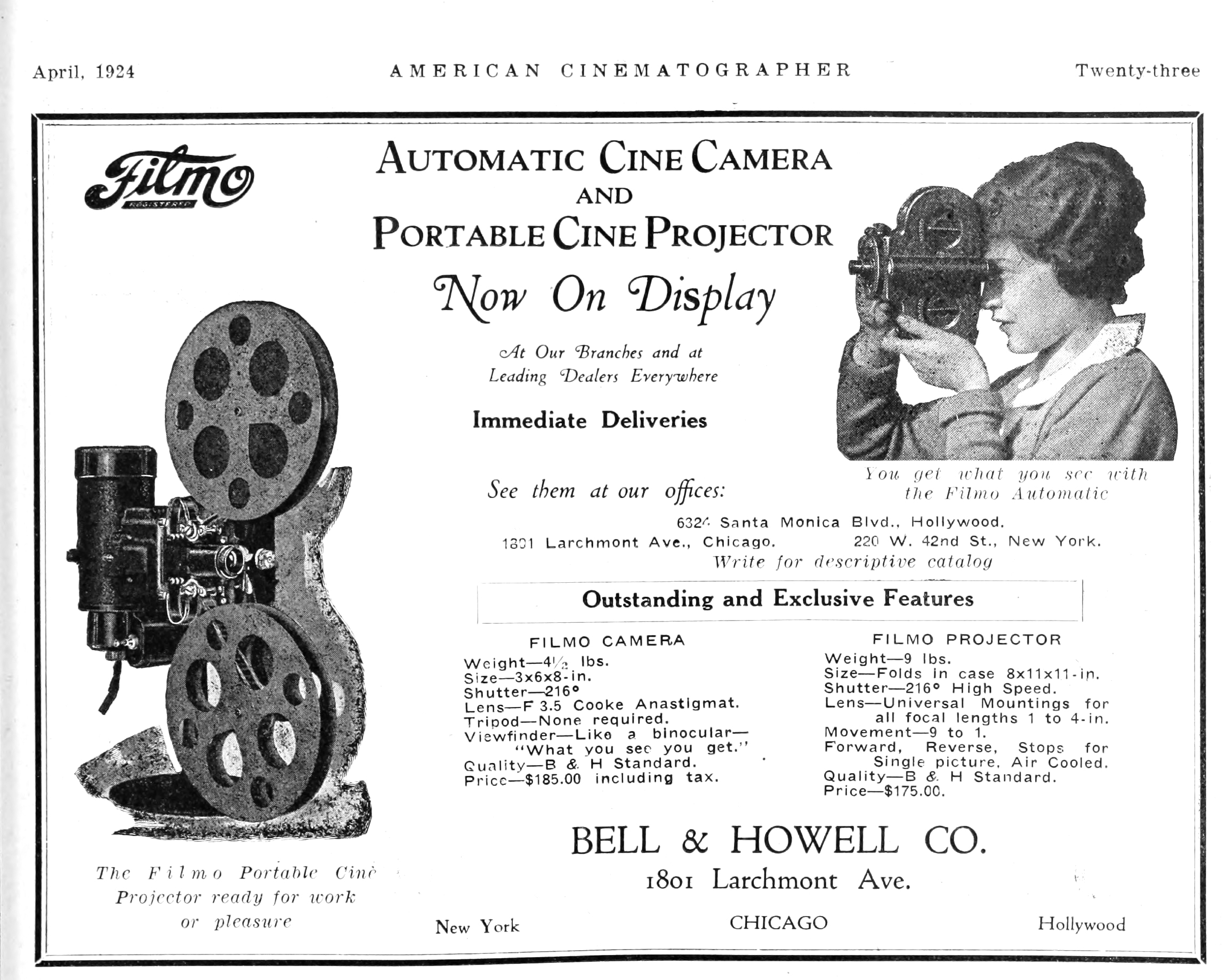 Announcement of the Bell & Howell Home Cine Camera and Projector.

Today, tens of thousands of individuals are using Filmo Cameras to make invaluable records of the activities and growth of their children, of their travels, of their vacations—in short, of every event of interest in their lives, and are showing these intensely human films with their Filmo Projectors. Commercial enterprises are equipping their salesmen with Filmo Projectors and sales films because they have found motion pictures to be a sales medium of the most effective type. Edu- cational institutions everywhere are using motion pictures more and more for visual instruction. And with the addition of the Filmophone, talkies are being shown with even the earliest Filmo Projectors.

Knowing the Bell & Howell Company back in 1919, you would have expected some such development as Filmo. And you would have expected them to accomplish this new job as well as they had done everything those past years. Bell & Howell have a right to call Filmo the finest personal movie equipment on earth, because they know, as no one else knows, how to build movie machinery, and also because the world confirms that statement. 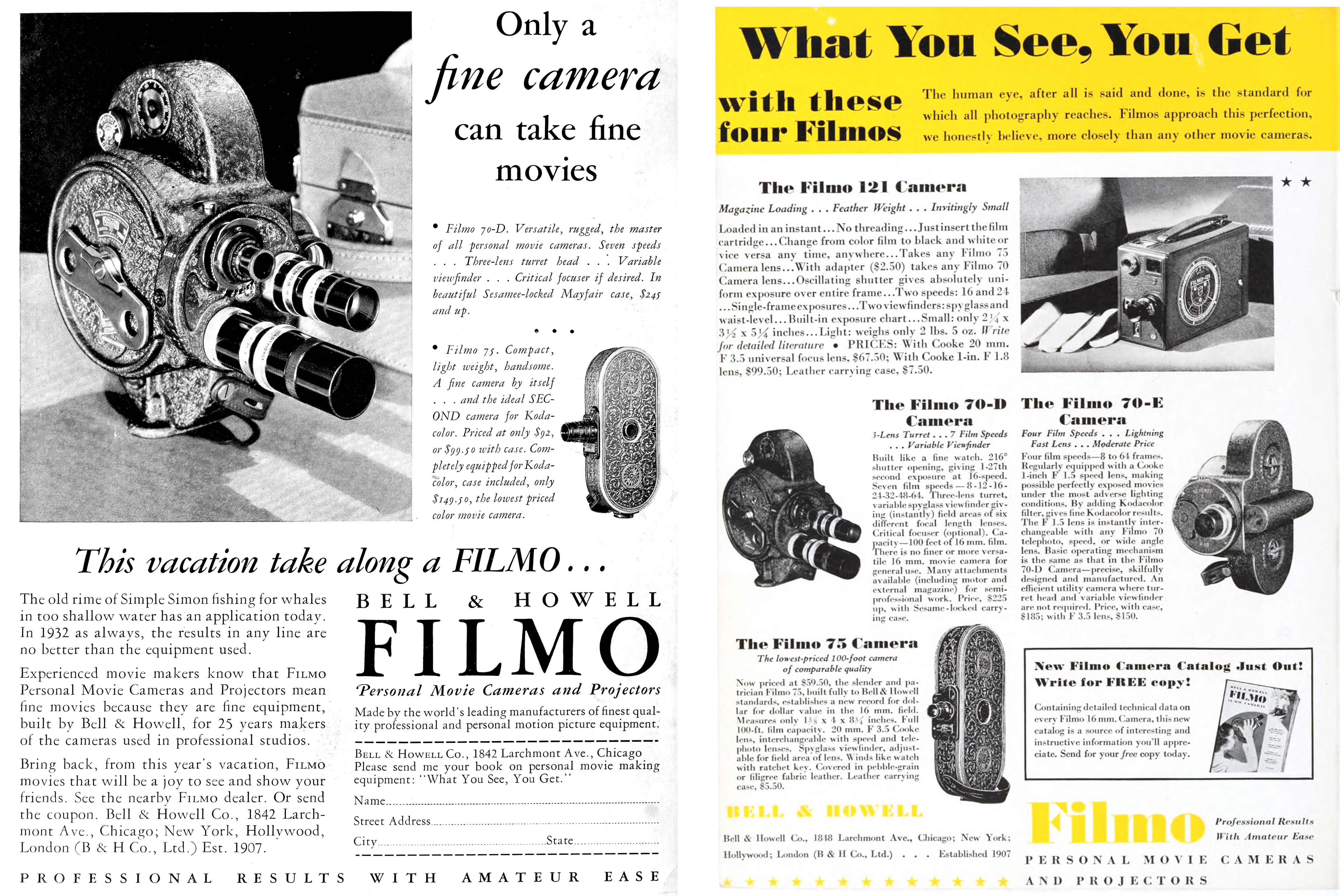 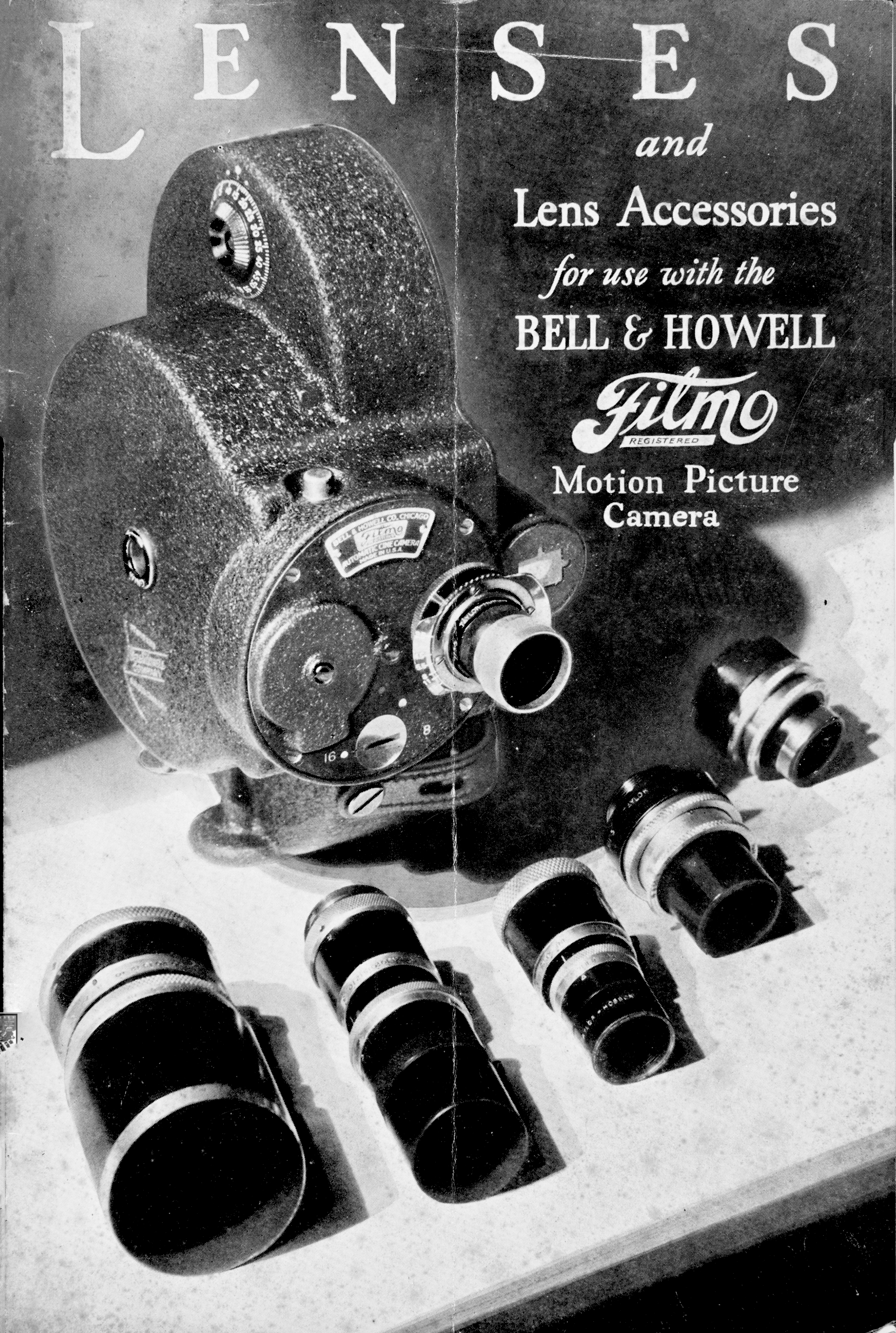 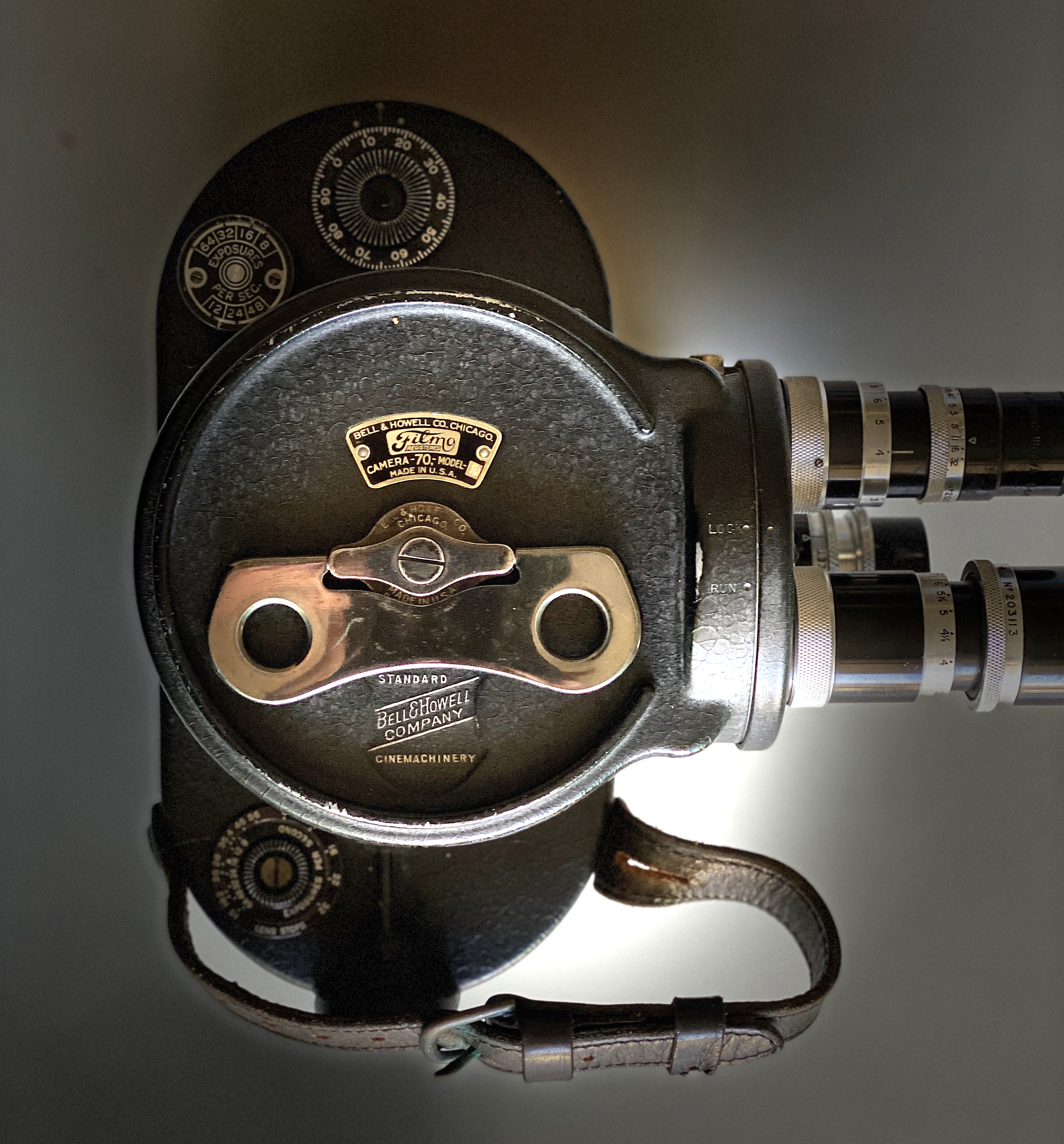 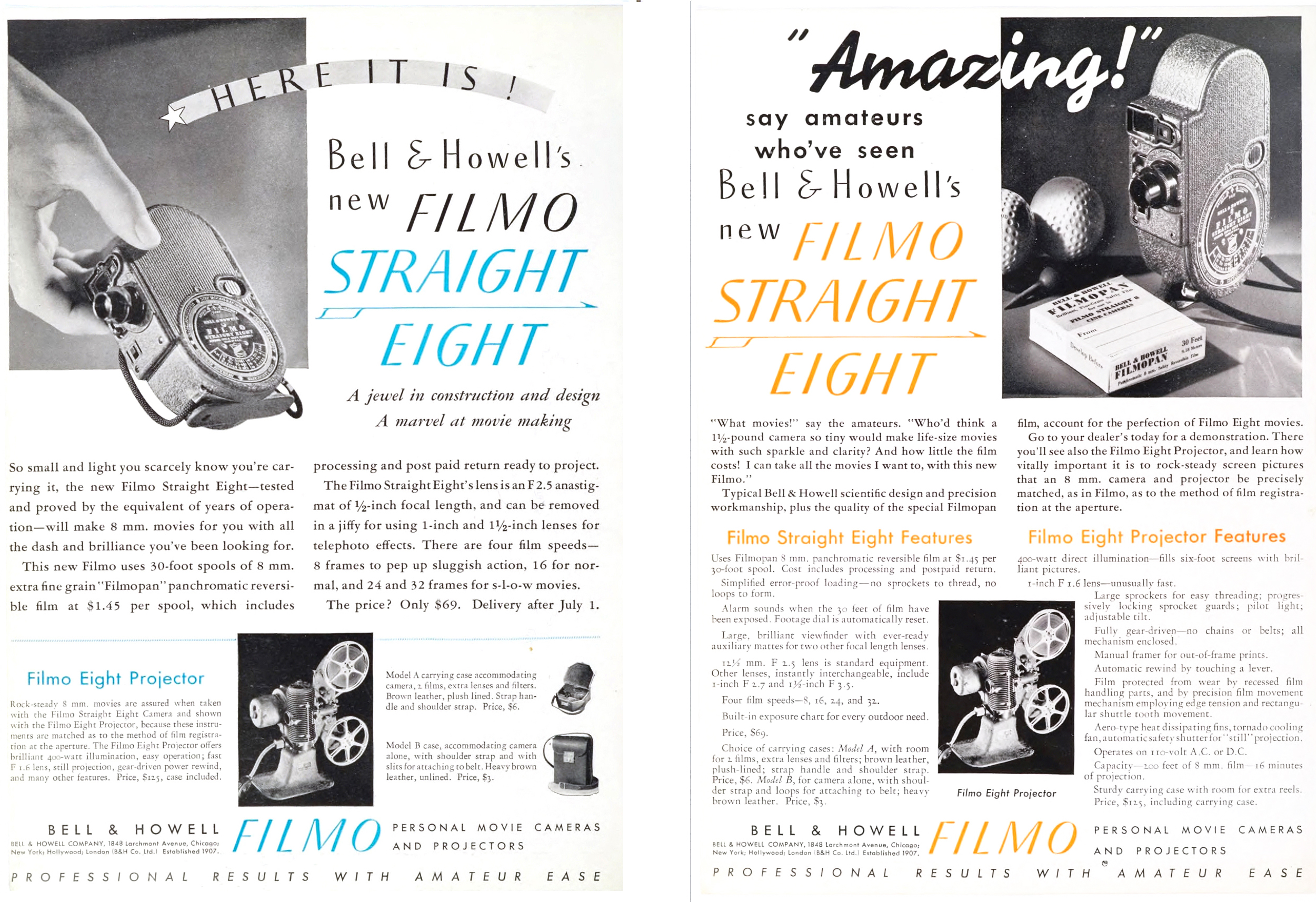 The announcement of the new Straight Eight 8mm movie camera in June, 1935.
The 16mm Filmo D was sold at $225, while the newer, smaller Straight Eight was priced at $69. The 8mm format made the personal movie industry affordable.