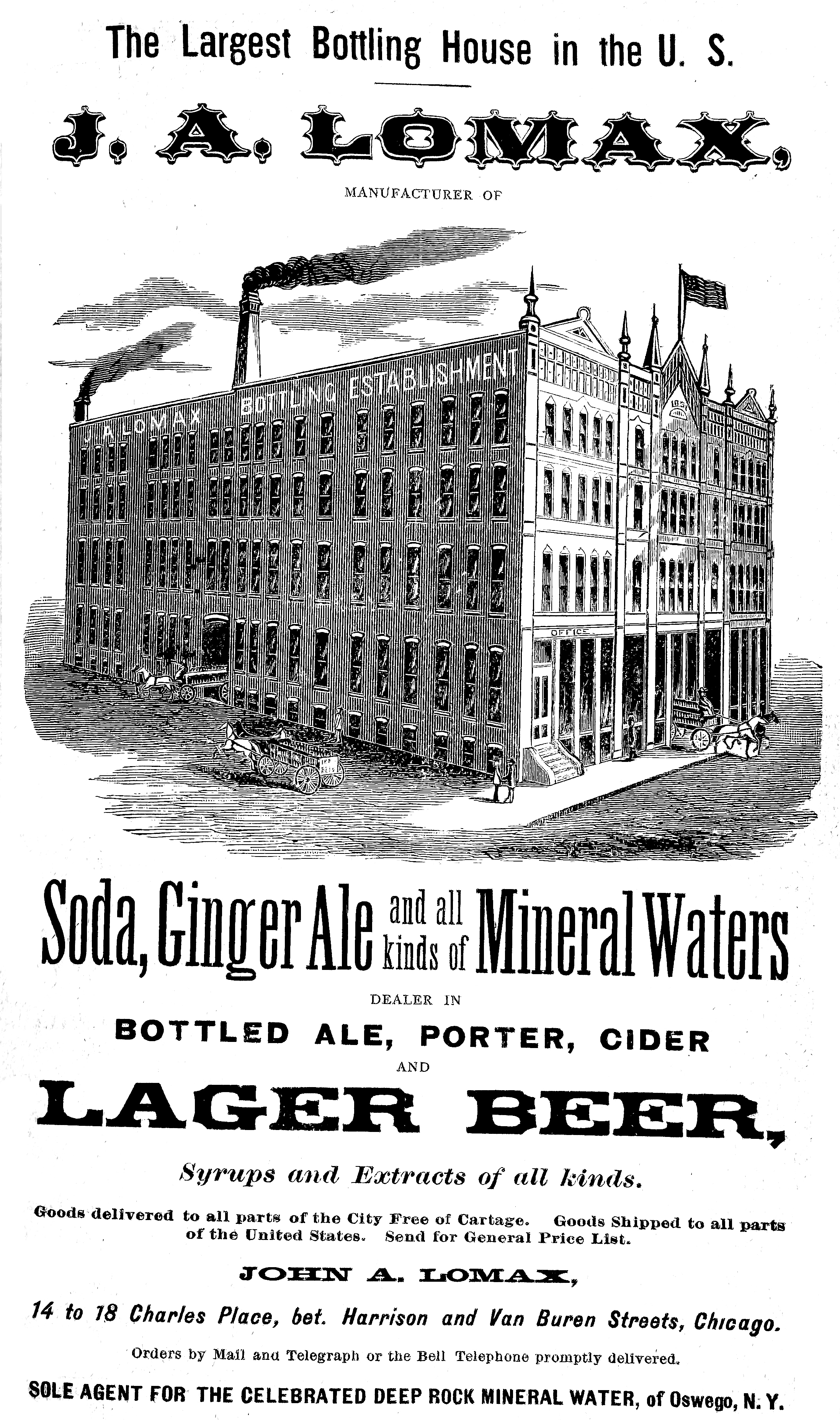 SODA.
John A. Lomax.
Among the purveyors to human comfort in Chicago, John A. Lomax takes a front place. He it is who palliates the fervid summer beat, and sets a shield between suffering and thirty human nature and the torrid solar rays. In the manufacture and trade in soda and mineral waters, ale, beer, porter, cider, and the rest of the pleasant beverage, Mr. Lomax profits himself and benefits his neighbors, doing one of the most extensive trades in those specialties in Chicago, and, to provide for his custom, has erected at Charles place an elegant, commodious, and perfectly. appointed manufactory, including from Nos. 14 to 18. Mr. Lomax began business here in 1854, having & modest establishment at No. 88 Lake street, where he was burned out in the great Lake street fire of ’59. The disaster of burning has followed him unceasingly, and he has four times seen hit establishment reduced to ashes. In 1869 he was compelled, by the pressure of orders, to seek more suitable quarters, and in that year removed to his present location.

In this capacious building he has facilities for turning out 12,000 dozen (144,000) bottles of soda per day, besides mineral water and other grateful beverages, and in hot weather his vast resources are taxed to their utmost to supply the demand his reputation and the quality of his wares have created. The line in which Mr. Lomax is interested include all the milder and most refreshing summer drinks and the various forms or varieties of malt liquors; in tho former class are included tho celebrated Ottawa mineral waters, bottled exclusively by Mr. Lomax direct from the springs; and of the latter he has perfected arrangements for the manufacture of a new and improved quality of Weiss beer. Mr. Lomax is sole agent in this district for the favorite Wheeling (West Virginia) ale and porter and deals largely, in Pittsburg draught ale, bottled seltzer, Kissengen waters, and Spruce beer. Genuine Belfast Ginger Ale, one of the pleasantest and healthiest of all beverages is sold as a specialty by this house, and that article purchased from Mr. Lomax, can be depended upon as pure and all that it is represented to be.

To supply his local customers, Mr. Lomax keeps twenty wagons running constantly during the season, delivering his superior goods, and it is needless to say that his reputation promises for the near future a great addition to this already large working force. Mr. Lomax’s establishment is fitted with the most approved machines used in manufacture, driven by a powerful engine, and operated by experienced and careful employes, and, as a natural consequence, his loss from breakage and leakage is reduced to a minimum.

He has recently patented an improved soda-water apparatus of his own invention, the principle of which is both novel and useful, he economical provision being a separate reservoir for gas, placing the operation of charging the water at the will and disposal of the operator. Mr. Lomax being an enterprising sad energetic business man, is constantly on the lookout for advanced processes,

and bringing his own talents and knowledge of the trade to bear, is constantly devising and perfecting improvements; his customers are thereby assured and secured that their purchases are the very best that money can buy or intelligence suggest.

The vaults. of Mr. Lomax’s factory are models of convenience and scientific arrangement. In them be keeps constantly about 2,000 dozen of bottled ale, lager, and porter, for family use; also, about 1,000 barrels of stock ale and porter, this stock being the best of his production, and, therefore, the best that can be bought from any dealer. Mr. Lomax is an energetic and reliable man, and has merited and received the confidence of his acquaintances, having been a member of the Twenty-eighth General Assembly, and with his long business experience and careful attention to the wants of customers, they may be well assured that all orders will be promptly and honorably attended to.

The works of the company extend from Charles place through to Congress street. The offices of the company are on Charles place, the upper floors of the building being occupied by George Lomax, a member of the firm. The main bottling works are on Congress street. The Congress street front is a three-story and basement building and consists of three buildings divided by light walls. The basement is fitted with heavy machinery, the first floor is the shipping-room, and the second and third floors are devoted to bottling and storage. The third floor of the west building was used as a storage room for chemicals used in bottling and the fire is supposed to have started in this room from spontaneous combustion. When first discovered smoke was pouring from the west windows and roof, and before the engines arrived the flames had spread to the top floors of the two buildings adjoining. The fire had broken through to the
second floor before it could be got under control, and some damage was done to the upper floors of the building belonging to the company fronting on Charles place and divided by an alley. George Lomax had begun to move his houshold belongings from the building when the fire was checked.

The company’s stables front on Franklin street and run back to the main building. Two hundred horses and 100 wagons with harness and feed were in the stables when the fire broke out. All the stock was led from the building, the roof of which was on fire at one time, but the flames were put out before doing any damage.

The Consolidated Bottling company is one of the largest concerns of the kind in Chicago. It manufactures mineral water and bottled soda, besides doing a large business in beer for brewing companies. Between 400 and and 500 persons are employed in the establishment, many of whom will be thrown out of employment temporarily. The buildings were insured.

A fireman on truck No. 1 was overcome by the fames and removed to a neighboring drug store. He recovered in a few moments.

John Alfred Lomax, President and chief owner of the Chicago Consolidated Bottling company and the pioneer of the soda water bottling business of the West, died suddenly of heart failure at his home, 4456 Vincennes avenue, yesterday, He had been in business in Chicago since 1848. He left a large estate. The arrangements for the funeral have not been made,

Mr. Lomax was the son of Lawrence and Ann Lomax, and was born in Berry, Lancashire, England, July 14, 1826. One year apprenticeship at the trade of stationary engineer, he started for America, and, on landing in New York, took passage for the West and landed in Chicago in 1848. His first employment here was in the engine. room of Abbott & Kingman’s planing mill, then at Twelfth and Clark streets. He saved his earnings and three years later he purchased the soda water factory of John Entwistle, then at 26 West Lake street. From that time until his death he was engaged in that business.

The fire of 1857, which swept clean all territory between Lake and Kinzie streets, from Michigan avenue to Halsted street. destroyed the building he occupied and all of the machinery, but in the face of all difficulties he rented a small two-story frame house in Charles place, on the site of the present big establishment of the Chicago Consolidated Bottling company, and resumed business. The building was only 20×30 feet, and a portion of it was used by the proprietor as a dwelling. From this small beginning he built up a business in which more men, money, and machinery are used than in any other two similar plants in the world.

During the years immediately preceding the fire of 1871 he had enlarged and added to the small building in Charles place, but that fire wiped out his buildings, plant, and stock, causing a loss of almost $250,000. Undismayed by misfortune, he re-established his business in the midst of the ashes and debris of the fire, and from that time it increased in volume to the point where he was admitted to be the foremost man in that business in the country. In 1887 he effected a consolidation of his own with fifteen other soda bottling plants, most of which he purchased, and formed the corporation of which he was President and chief owner at the time of his death.

The surviving members of his family are the widow and three children, James H., George, and Robert D., the sons being prominent business-men.

Mr. Lomax owned several farms in Indiana, extensive tracts of acre property near Chicago, and many vacant and improved lots within the city limits. His fortune is estimated at not less than $3,000.000. In former years he was actively and prominently interested in politics. He was a Democrat, and in 1873 was a member of the Illinois General Assembly,

Purchase by Brooks Estate.
Another of the big deals of the week, was the purchase by the Brooks estate of the Lomax property, comprising 212½ x 105 feet at the southeast corner of Congress and Franklin streets, together with 60×107 feet, south front, on Lomax place, 120 feet west of Fifth avenue, making altogether 28,732 square feet. The land is at present covered with old brick and frame improvements, which have been occupied for a number of years by the Chicago Consolidated Bottling works, and were given no value of the transaction.

A substantial consideration appeared in the deed, but it is understood the price was around $18 a square foot, and with the properties given in part of the exchange, over $600,000 was involved in the transaction.

The purchase was made by the Brooks estate, already a large holder of central business property, as a permanent investment, and it is the purpose ultimately to improve the land with modern structures adapted to the requirements of the locality.

The sellers were represented by Edgar M. Snow & Co. and the purchaser by Aldis & Co., while the sales department of Thomas A. Hall & Co. acted as intermediary brokers.

History of Lomax Property.
The property is one of the few remaining holdings in the downtown district, and it is noteworthy that a large part of the property has been owned by the Lomax family for forty-nine years, and that one of the sons, now nearky 40 years old, was born on the property.

It is in the center of a section which has shown remarkable development during the last few years. Immediately across Congress is the the Kuppenheimer ten story building; across the alley is the Lesher building, and to the east, at the southwest corner of Fifth avenue and Congress street, is the eight story building erected by Washington Porter for Hart Bros., while west, across Franklin street, is the eight story building which E. R. Butler erected for Rosenwald & Well. 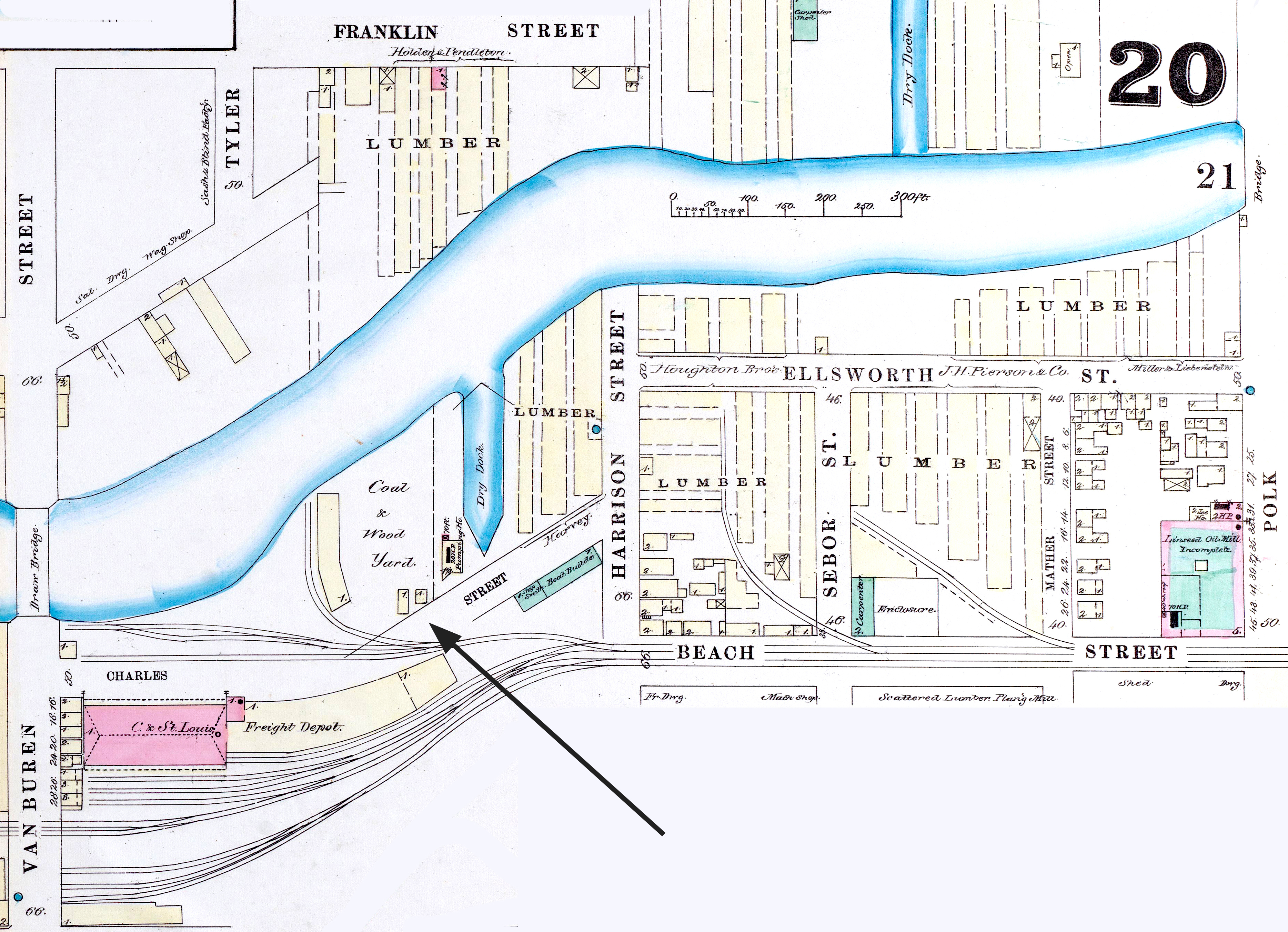 Lomax, John A., sodamaker, 4 Charles (1863-64 Bailey & Halpin’s Chicago Directory)
Note that Charles Street was located west of the River, and after the 1871 fire, it was moved to the east side of the river and renamed as Charles Place and renamed again to Lomax Place.
Sanborn Fire Insurance Map
1868 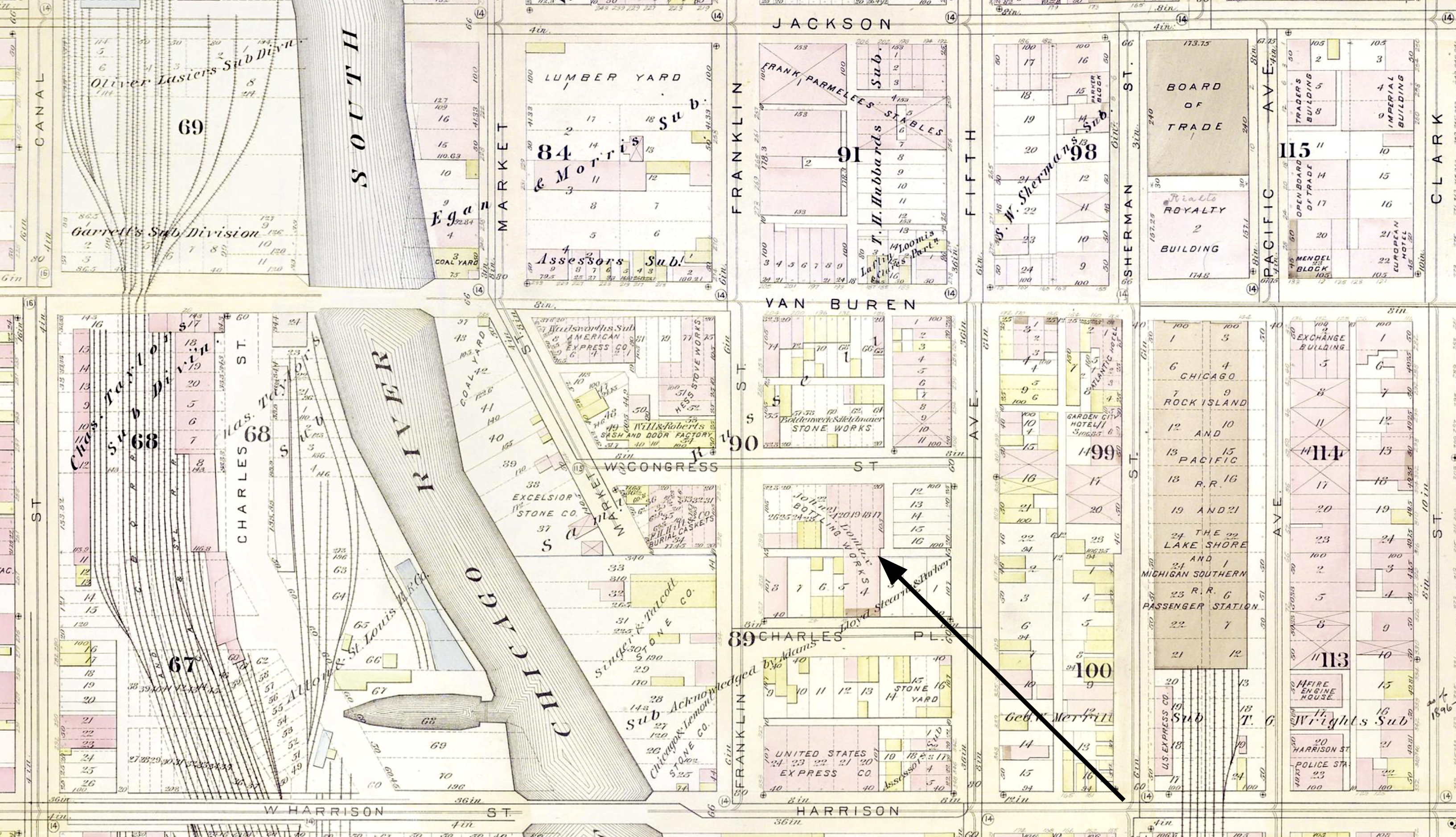 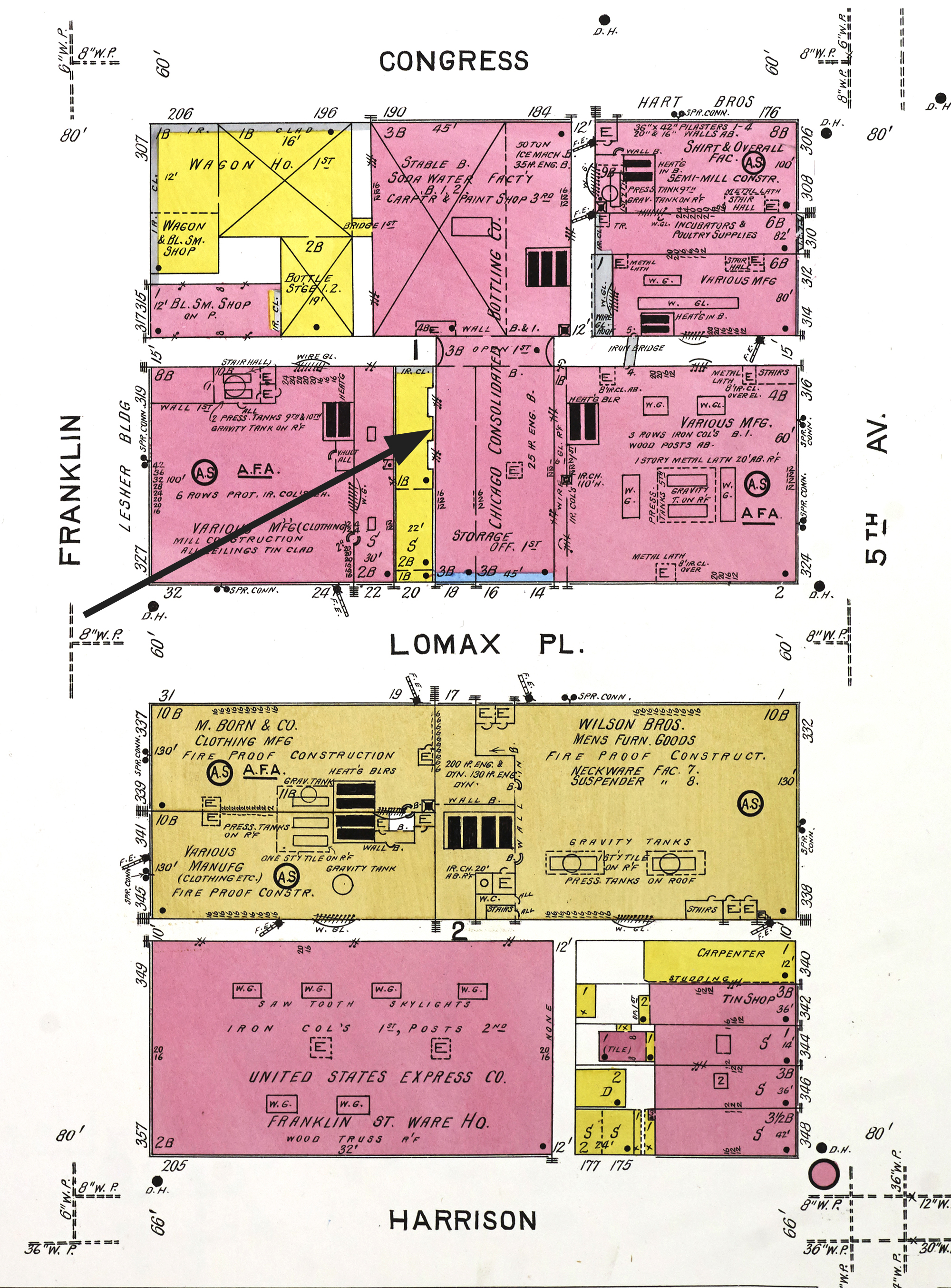