BALLARD BLOCK, 1873-1912, later known as the Ely building, at the southwest corner of S. Wabash avenue and E. Monroe street, with a frontage of 100 feet on the former and 85 feet on the latter, was five stories and one basement high. Victor Roy was the architect 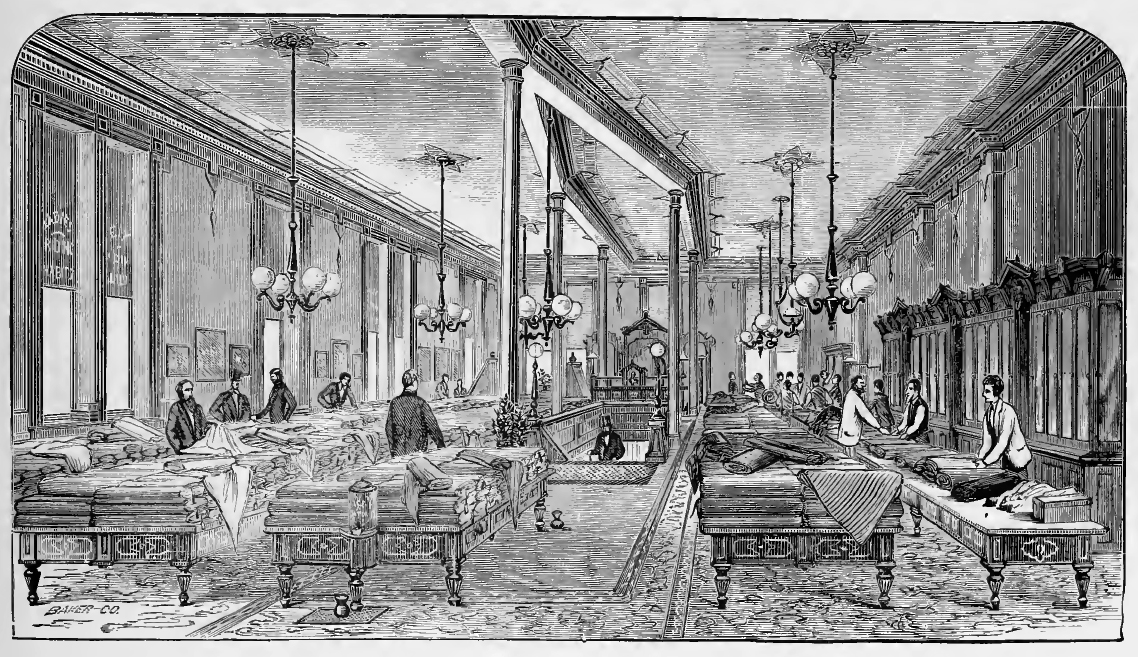 Ely Building, corner Wabash Avenue and Monroe Street. Mr. Edward Ely, whose portrait accompanies this sketch, was the pioneer of the business of fine merchant tailoring in Chicago. He came to this city in 1852, from his birthplace, Huntington, Connecticut, and at once embarked in the trade with which his name was always afterward associated. He had already become a thorough master of it in all its details, and soon amassed a competence; but like so many other business men of Chicago, he lost it all in the great conflagration of 1871. He was not however, one of those men who can be kept down long. He began at once to rebuild his fallen fortunes, pursuing the same policy of upright dealing, keeping fully abreast of his trade in everything and studying to meet the wants of his customers, he was able in 1886 to incorporate the present company under the law of Illinois, with a paid-up capital of $100,000. But he did more; he erected tailoring into a fine art, he impressed his own individuality upon his business to a degree that few, if any, had ever attempted before. He was, before his death, one of the most unique characters of Chicago.

Of course, the business being in the hands of a corporation did not stop with his demise, but continues on the same lines as those established by Mr. Ely himself. Its present quarters constitute one of the finest appointed merchant tailoring emporiums in Chicago, and are fully equipped with every convenience tor the comfort of patrons, and the advantageous display of the fine stock of French, English and German broadcloths, cashmeres, woolens, worsteds, tweeds, meltons, cheviots, diagonals, etc., in all the latest and most fashionable styles. Some idea may be formed of the extent of the operations of this company when it is stated that seventy-five journeymen and five cutters are provided with constant employment. Mr. Ely, in point of fact, ranked as the leading merchant tailor of the metropolis of the West, his trading connection being broadly distributed over the entire country. 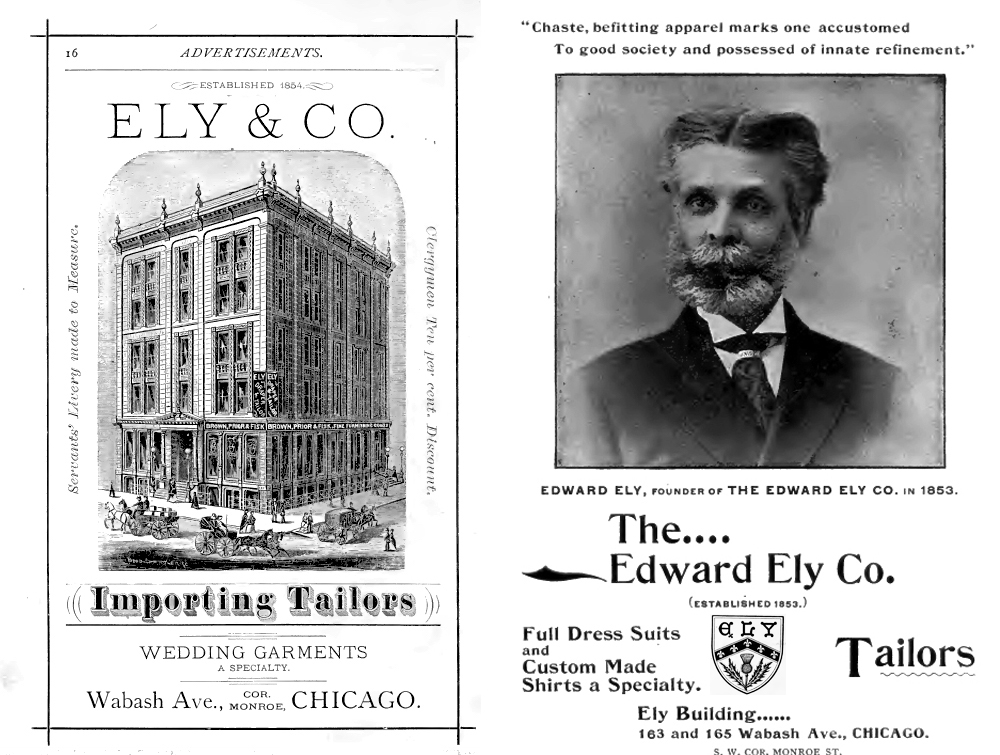 He was a prominent member of both social and commercial circles, actively indentified with the Merchant Tailors’ Association, and a heavy holder of Chicago realty.

There are few establishments in mercantile lite which occupy more general attention in these days of tasteful attire than of those devoted to the manufacture and sale of male garments. Of this branch the Edward Ely Company is the best appreciated and the most prosperous representative. Visitors to Chicago who fail to visit the palatial parlors of this company will certainly fail to see a thoroughly characteristic Chicago institution, which may properly be regarded as the best type of its class. The ladies especially will appreciate the thoughtful and considerate care taken in the department devoted to the best class of ladies’ garments and wraps. There is no place in Chicago where better facilities are afforded, or where better taste and skill are displayed in meeting the wants of customers.

In 1898 William and Hannah J. (Shaw) Turner;purchased the merchant tailoring business of the Edward Ely Co.

One of the most important transactions in central business property of the year was closed Wednesday, when Leroy A. Goddard, president of the State bank of Chicago, purchased from the estate of Leander J. McCormick, the property at the southwest corner of Wabash avenue and Monroe street for $600,000, and leased the ground thus acquired to David Mayer for a term of 198 years at an annual rental of $30,000, or 4 per cent on $750,000. The lessee will improve the property early next spring with an office building 200 feet high, the limit allowed under the present ordnances, that will cost not less than $500,000.

The property purchased comprises what is known as the Ely building, a seven story structure built soon after the great fire, and 85 feet on Monroe street. The ground and building was valued at $468,355 by the board of review, 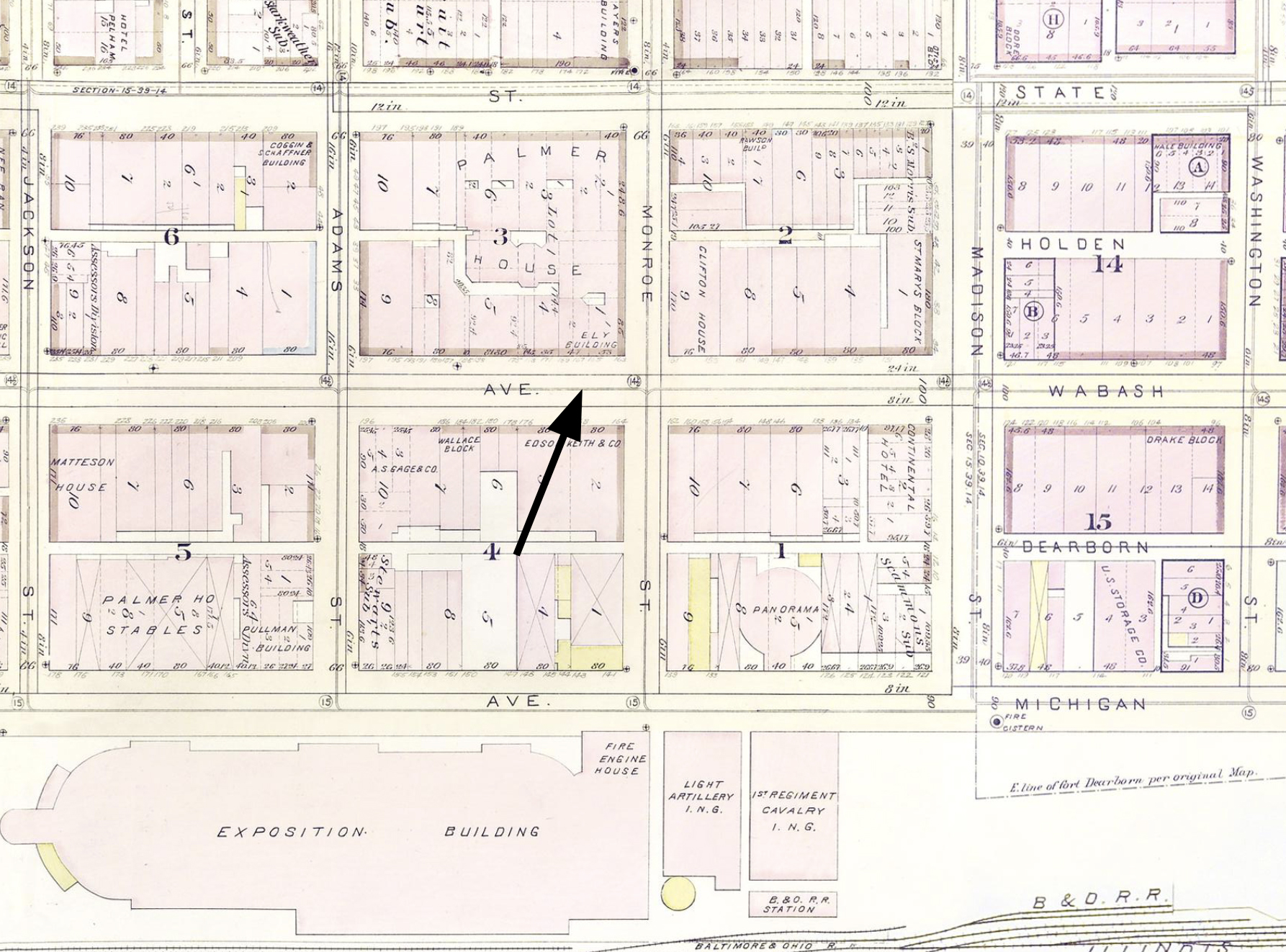