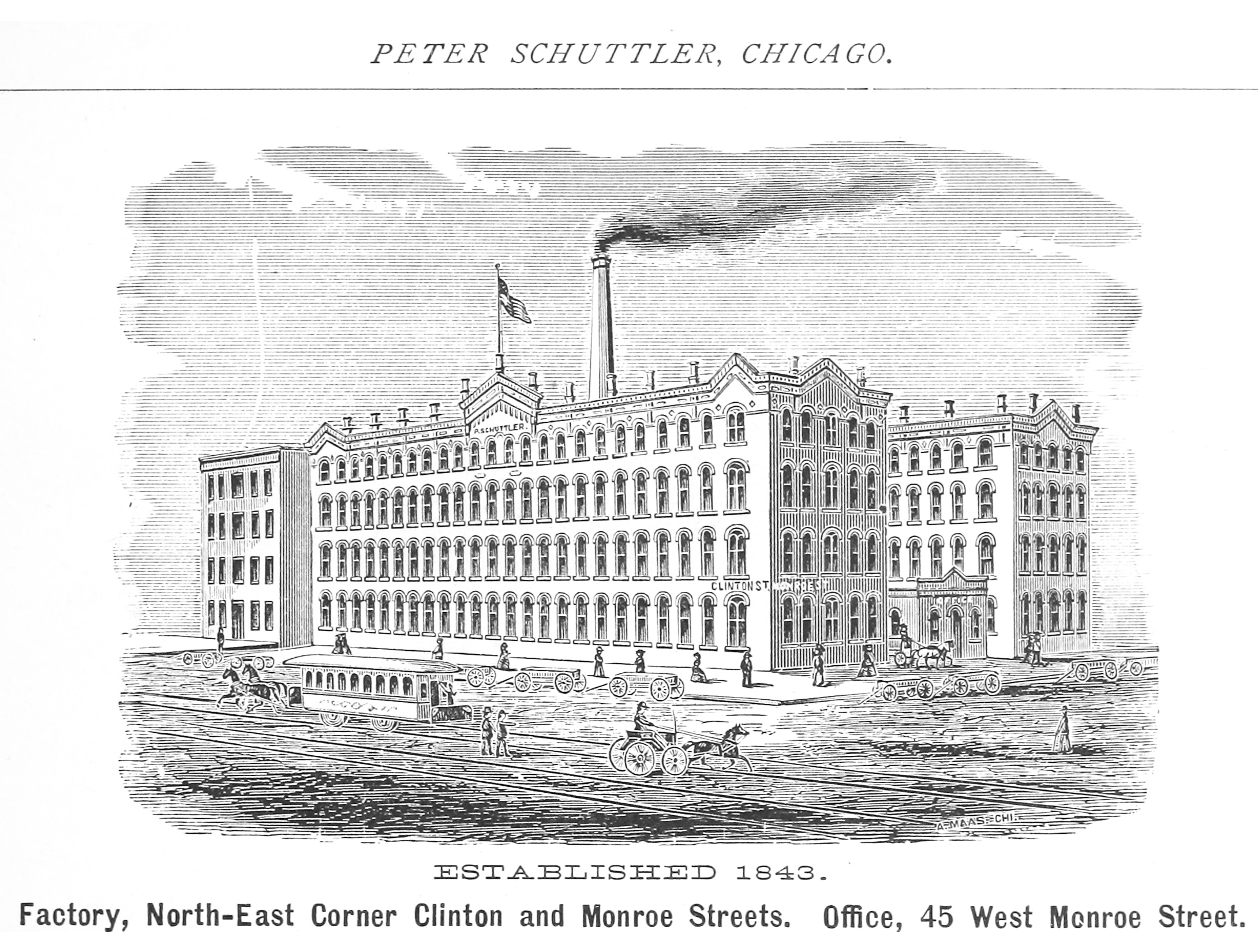 The Peter Schuttler Wagon Works, of which Schuttler & Hotz are proprietors, were established in 1843 by Peter Schuttler, Sr., who died in 1865. The works were burned in the Great Fire of 1871, but plans were laid for a larger factory before the ruins were cold, and the buildings were completed by the following spring.

Soon afterward the firm added the hub and spoke factory occupying the two blocks between Sebor and Mather sts., from Beach st. to the south branch of the Chicago river. The total area occupied by the works amounts to more than ten acres, and over 400 men are employed. The capacity of the works is 12,000 wagons per year, but in these days of ready-made wagon parts this does not sufliciently express the volume of work that is done by this concern.

Messrs. Schuttler & Hotz are perhaps the only manufacturers in this line who buy the raw material alone and manufacture their own hubs, spokes, felloes, bolts, and, in short, everything that goes to make up the complete vehicle, requiring 4,000,000 feet of lumber and 20,000 tons of iron per year to keep the works busy. 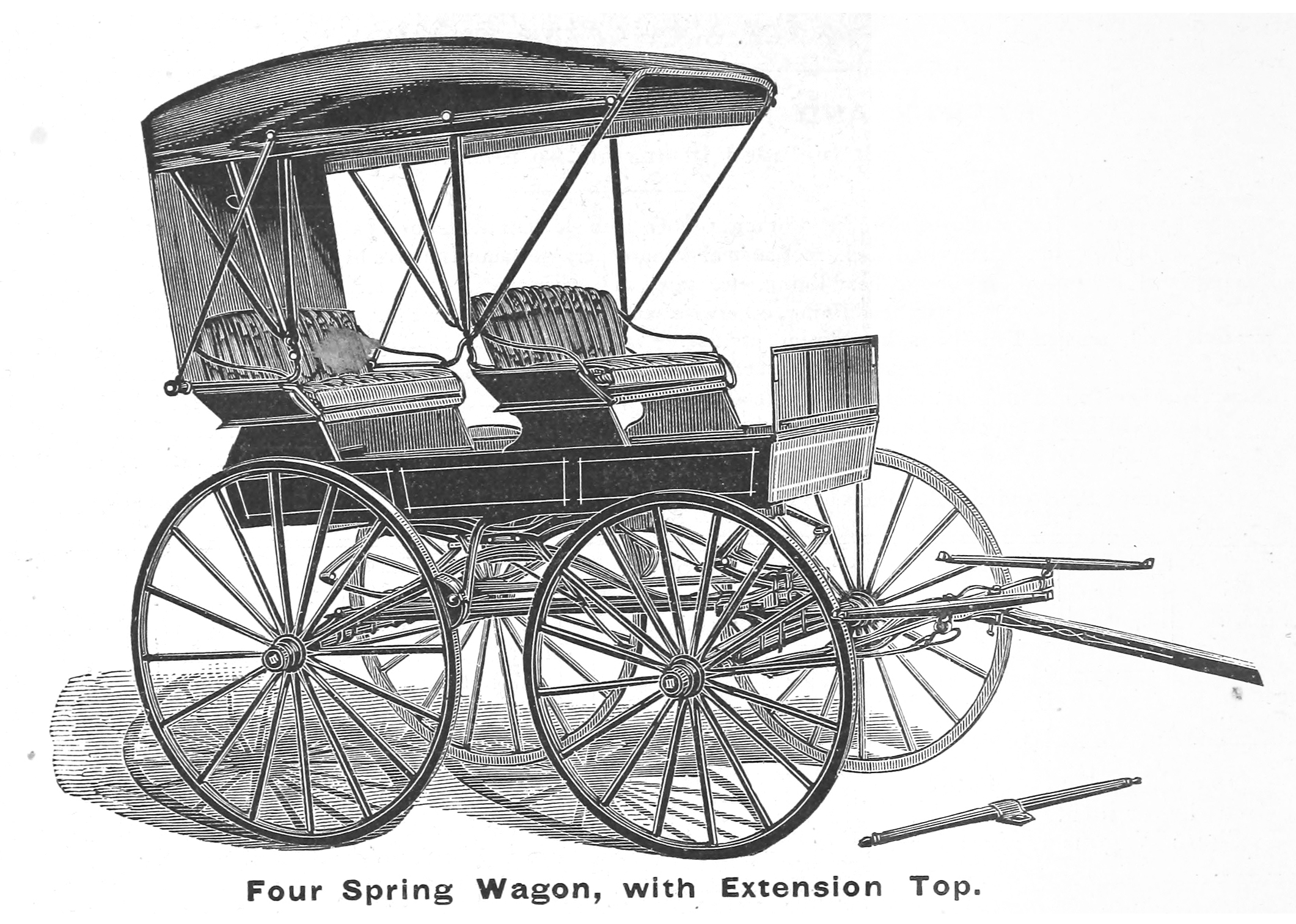 The Schuttler wagon was one of the greatest civilizing influences felt in the great West. It blazed the way across the plains long before the whistle of the locomotive was heard. To-day the traveler in the far West, between the Missouri river and the Pacific ocean, can scarcely find a settlement or a ranch where Peter Schuttler’s celebrated wagons are not in use.

Schuttler’s durability, craftsmanship, and attention to detail earned the company the pinnacle of brand loyalty and a highly enviable reputation during its eighty-plus years in Chicago.

In 1863, he was one of only three Chicago, IL residents to pay taxes on an income of over $100,000. Mr. Potter Palmer and Mr. John V. Farwell were the other two Chicagoans. The house Mr. Schuttler built (on the city block bordered by Aberdeen, Adams, Morgan, and Monroe Street in Chicago) was long considered the finest mansion in Chicago. Built by J. M. Van Osdel over the span of three years, this exquisite house contained many artifacts and hand-crafted building components brought in from Germany, Mr. Schuttler’s birthplace. It is rumored that the total cost of the home was nearly $500,000, a considerable sum in the mid-19th century. It was razed in 1911. 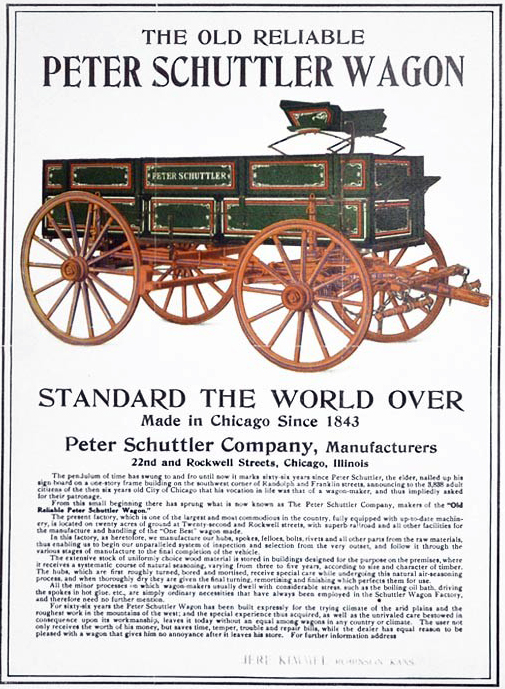 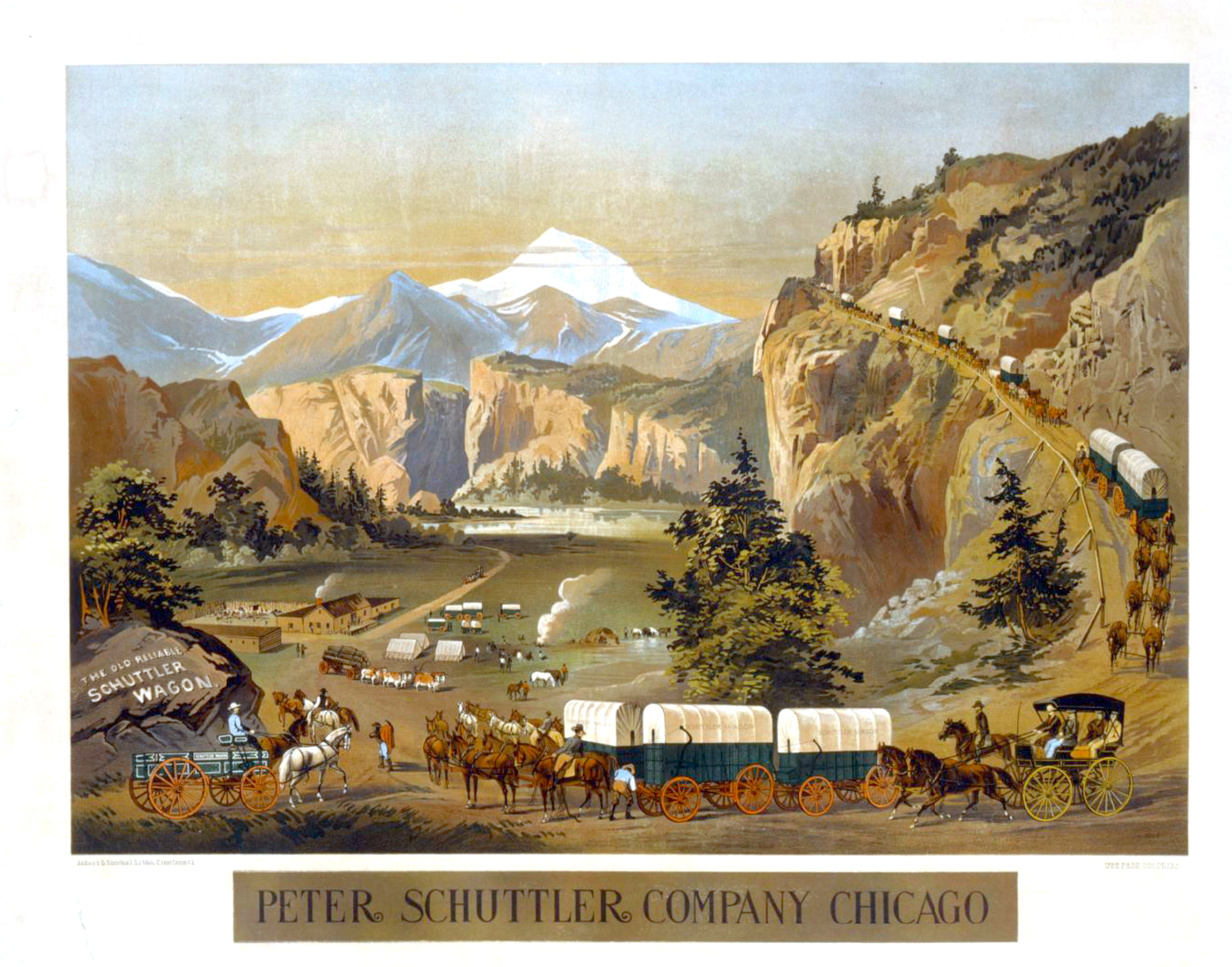 DEATH OF PETER SCHUTTLER.—One by one our ancient landmarks are being removed. Yesterday morning, Peter Schuttler, who for a quarter of a century has been identified with the business of Chicago, died at his residence, on West Monroe street, between Morgan and Aberdeen, after an illness of but five days, aged about fifty years. Mr. Schuttler was a native of Baden, Germany. He came to Chicago from Cleveland in 1840, and purchased the corner on which his present establishment now stands, and at once set up a small jobbing shop. Strictly attentive to his business, steady and upright, he has gradually extended his manufactures until at the time of his death, his was one of the most extensive establishments in the Northwest. The progress of his business may justly be esteemed as an index of the growth of our city, with which Mr. Schuttler has been so closely identified. He had nearly completed his new residence, (the scene of his decease) the most magnificent building in Chicago. Mr. Schuttler leaves a wife and two children, (two of whom have attained their majorities.)

After the founder died in 1865, his son Peter Schuttler II took the reins of the business, which continued to manufacture a large number of high quality wagons. By 1880, about three hundred workers produced over $400,000 worth of wagons per year.

As late as 1910, when Peter Schuttler III was chief executive of the company, Schuttler & Hotz Manufacturers continued to employ about three hundred men at its factory on 22nd Street in Chicago. But the advent of the automobile meant the end of an era for the Schuttler wagon works. The Springfield Wagon Company in Springfield, Missouri acquired the rights for the Schuttler name after the Chicago company closed in 1925. 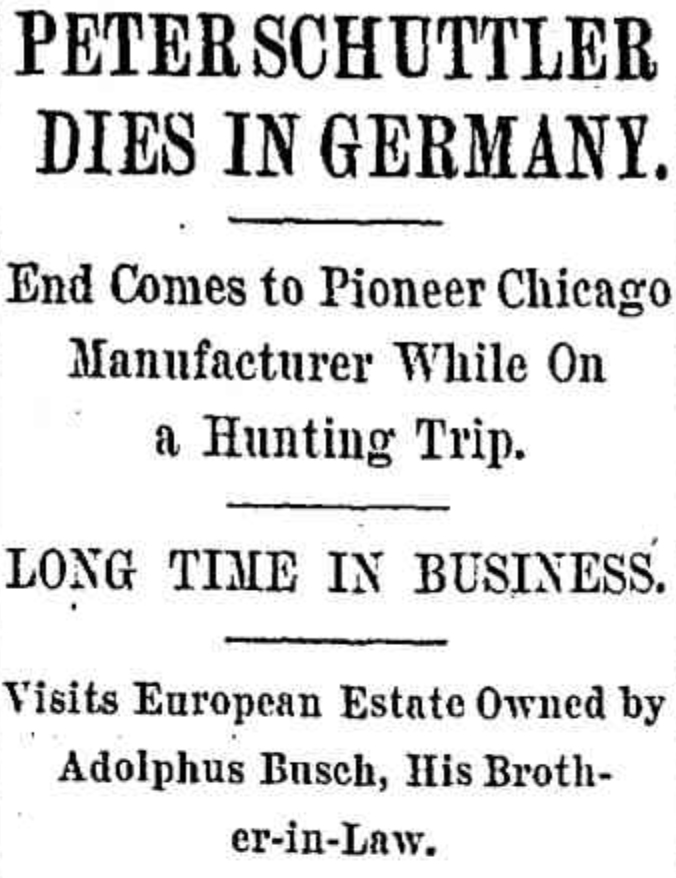 Mr. Schuttler, who was 65 years old, was spending the summer in Europe. e went abroad early in June to attend the fiftieth anniversary of his college club, “Saxonia,” of the Karlaruhe, polytechnic school, where he was educated. Afterwards he toured through various parts of Germany and was to have sailed for News York from Cherbourg on Sept. 19, the date of his birth. A little over a week ago he was taken ill with stomach trouble. He gradually grew weaker until his death.

About a year ago Mr. Schuttler was stricken with a similar illness while attending a banquet of the Chicago Commercial club. He recovered quickly, but since that time had suffered slight attacks at intervals.

He was identified prominently with the manufacturing interests of Chicago. He was president of the Peter Schuttler company, makers of wagons at Clinton and West Monroe streets, and was engaged actively in the business up to the time of his death. He had been at the head of the concern since the death of his father in 1865. Until a few years ago he was a member of the Chicago and other clubs. He retained his membership in the Chicago Commercial Club and was one of its most active workers for Chicago’s advancement.

Survived by Five Children.
Mr. Schuttler’s wife died five years ago. He is survived by his five children, four sons and one daughter. The sons all are at home in Chicago and they received no details of their father’s death except the brief dispatch. More news is expected today, when funeral arrangements will be made. The daughter, Miss Lillian Schuttler, was traveling in Europe with her father and was at his bedside at the time of his death. The four sons, who are associated in the wagon business of their father are Peter Jr., Carl, Walter and Adolph B. It is expected that Mr. Schuttler’s body will be brought home on the Kronprinz Wilhelm on Sept. 19, the same day he was to have sailed for New York.

Finishes Education in Europe.
He was born in Sandusky, O., on Sept. 19, 1841. He was brought to Chicago by his parents in 1842. His father established the wagon works at Randolph and ranklin streets in 1842. The plant was moved to its present location after the Chicago fire. Mr. Schuttler was educated in the public schools and in the Gleason preparatory school. He was sent to Karlsruhe in 1856, where he took a four years’ course in civil and mechanical engineering, graduating in honors. He entered business with his father on his return to America, and later married Miss Anheuser1, who was a sister of Mrs. Adolphus Busch. When his father died he assumed full control of the wagon manufactory. He was a republican, but was not active in politics, although he was a presidential elector at the time of Gen. Grant’s last nomination. He was a member of the Illinois state board of agriculture from 1882 to 1884. Mr. Schuttler’s chief recreation was shooting. He organized the Tolleston Shooting club. Mr. Busch’s shooting lodge, where he died, was the center of a fine game preserve.

High taxes have forced the owner of the northeast corner of Clinton and Monroe streets to the conclusion that it will be cheaper to wreck and rent than hold and pay. It was announced yesterday that the four story, sixty-five year old structure, owned by Mrs. Catherine Coonley, is to be torn down. The site has been leased for five years to the Monroe-Clinton Auto Park, Inc., of which B. N. Segal is president. The lot is 160×190.

The Globe Wrecking company will start wrecking the building, which originally was the Peter Schuttler Wagon factory, on May 1. The proposed parking and service station will open about June 1. Don Snider of Baird & Warner, Inc., was broker for both parties Morris Townley and Morris Kompel were attorneys.