NEW STATE STREET BLOCK.
The southeast corner of State and Washington streets is to be occupied by a building which will compare favorably with the structures opposite in either direction. With the exception of the low brick building which now holds the extreme corner, and which cannot be removed within two years, the new block will have a front of one hundred feet on State, and ninety on Washington street. It will be of brick, the first story front of iron and polished French plate glass of unusual size, and the remainder of the front of Ohio sandstone. The building, five stories and basement, will be finished throughout in the most elegant and expensive manner, and will cost $120,000. The contract calls for its completion by November 15.

THE NEW BLOCK, CORNER STATE AND WASHINGTON STS., CHICAGO.
Among the new edifices erected during the past year in this city, none attraqcts more attention than the elegant and substantial structure which forms our frontispiece this month, now finished except for the corner store, delayed on account of a leasehold, and being rapidly occupied by first class tenants. It is the property of of W. E. Hale, Esq., of the Rock River Paper Co., and Edward S. Jennison, Esq., of this city. 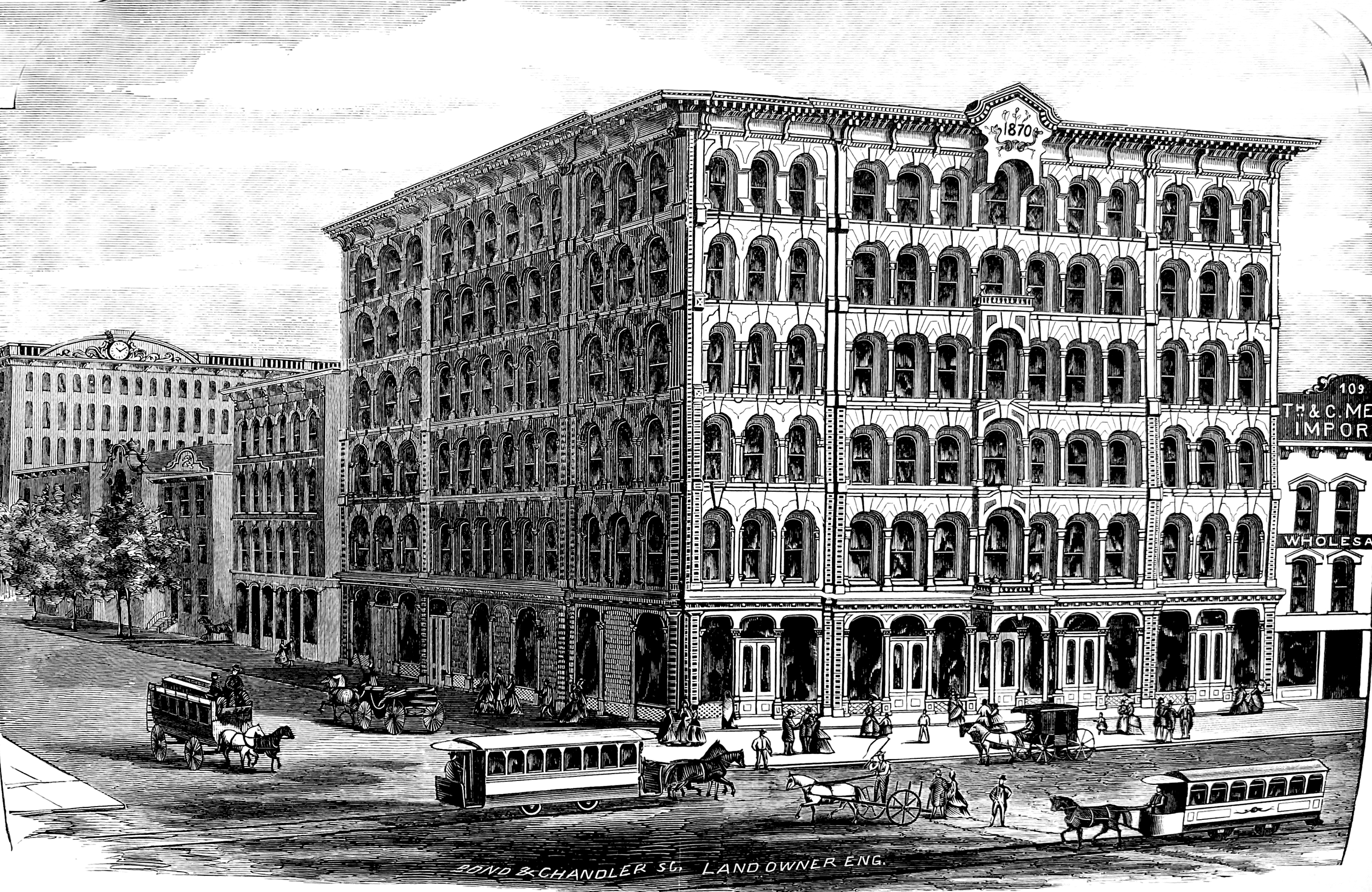 DETAILED DESCRIPTION.
This building, when completed, will measure 90 feet on Washington street, by 100 on State, six stories and basement. The basement is 8 feet 1½ inches in the clear, the first story is 16 feet 4½ inches in height, the 3rd story 15 feet 1 inch, the 3rd story 13 feet 8 inches, the fourth story 12 feet 8 inches,5th story 12 feet 3 inches, and the 6th story 13 feet 6 inches. The facades are of iron, the elevations of Cleveland stone, and the windows are glazed with polished French plate glass throughout. The building is so made that each floor may be thrown into one room; then the rooms are afterward divided by bricj partitions on the girders.

FIRE PREVENTIVES.
Each floor is double thick, and there is at the center door of the front a three-inch iron water pipe leading to the top of the building, and presenting two corporation connections, to which the city fire engineer may attach. At each floor the pipe has two openings—on one of which a hose may be connected; on the other is a stop-cock, with connections to the street. By this arrangement, in case the building should take fire at the top, two of the city engines could attach to the openings at the walk, and by means of the pulls in the central hall, open the cock in the pipe that would flood any one or all of the floors. At each of the well holes, around the stairs, are steps 6 inches hight, which make a basin of each floor, 6 inches deep. This arrangement, it is considered, will prove an effectual barrier to fire working down, and a decided check to fire working up.

A PASSENGER ELEVATOR.
It is the intention to have a steam passenger elevator, opening from State street, leading to the same. The three upper stories will be finished as offices in the finest style, and taking the Sears Building in Boston, and the Equitable Life Assurance Building in New York, as models, this will form one of the pleasantest buildings in the city. The upper part being occupied by offices, will add very materially to the value of the lower stores for retail tarde.

THE PERSPECTIVE—PROPERTY INTERESTS, ETC.
Our engraving represents this structure as seen from the St. James Hotel, with the new Drake Block, illustrated elsewhere, in the background. This is one of the liveliest portions of the city, and the view is superb. There is not a finer vista in any city in the world, and the new block adds greatly to the price of the already gilt-edged property of this favorite locality.

THE PROPRIETORS AND ARCHITECT.
In the erection of this costly edifice, the proprietors as well as the architect, Edward S. Jennison, Esq., have done themselves lasting credit. Its appearance is at once a model of taste and solidity. Externally there is no finer block in the country. 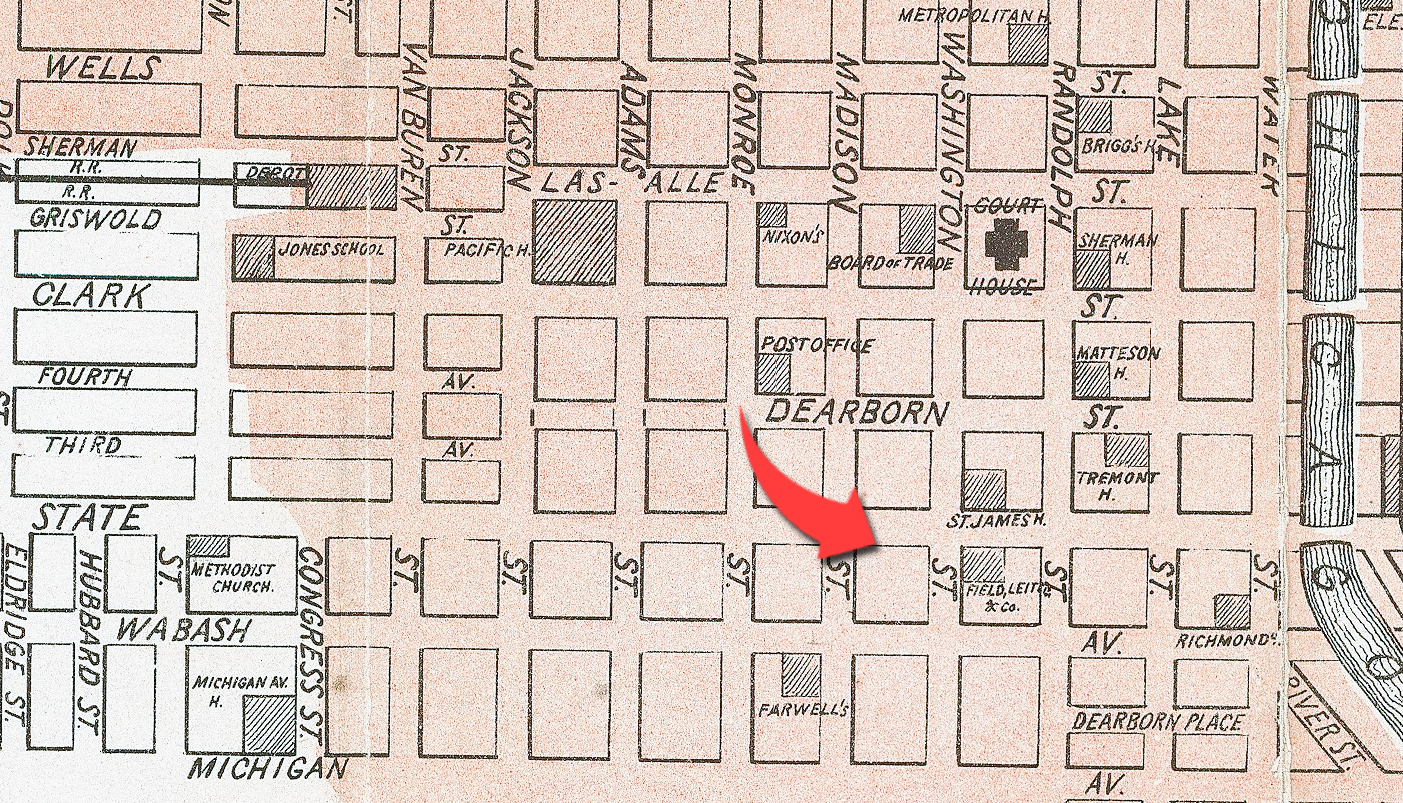 Hale Block I
SE Corner of State and Washington Streets
1871