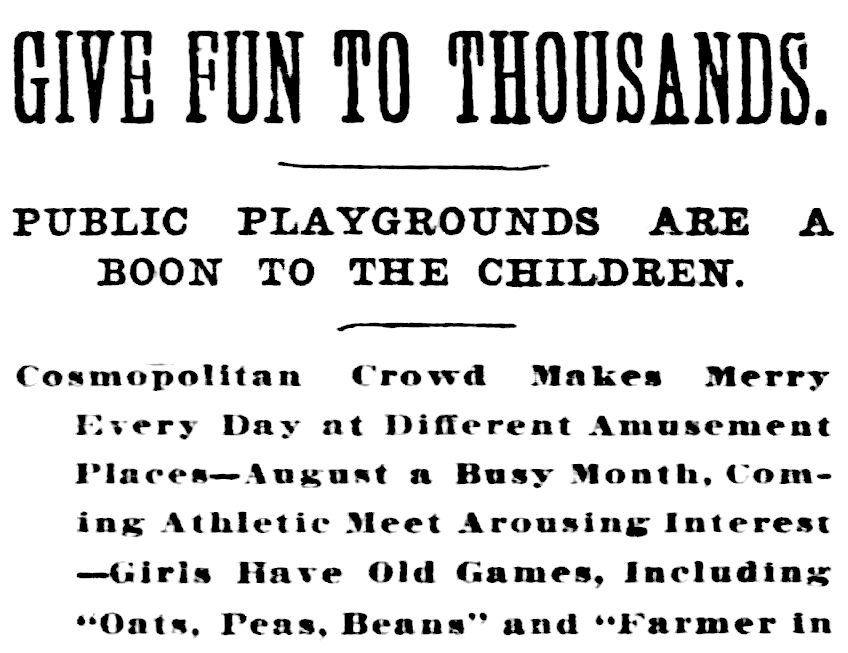 Do you know how to play “Johnnie is dead.” “Miss Jennie O’ Jones,” and “Farmer in the dell”?

If not, there are hundreds of children at the Moseley playground, Twenty-fourth street and Michigan avenue, who would like nothing better than to show you how. It would not take you long to learn, for these are the popular old street games that have been handed down from ever so long ago. The children of the streets begin to play “Miss Jennie O’Jones” almost unconsciously. They cannot remember when they first played “Farmer in the dell.” No codes of rules is to be found in any book. The rules, however, are iron-clad, and are included in the lore of the child tenement world.

Friday Is the Great Day.
The sound of merrymaking from this “children’s paradise” on a Friday afternoon would leave no doubt in the stranger’s mind as to the popularity of public playgrounds. Friday is the great day there, as the rabbi tells the little ones they must stay home on Saturdays and not play. But on the sixth day day all the little Jacobs and Rebeccas in the neighborhood can come and “mage playings” with other boys and girls.

The assembly is cosmopolitan. No color line is drawn. Brown eyed Dinah Jones, and little Gawdge Washington are as welcome on the ‘teeter-taughter” as the Bessies and Charlies, or the tiny Chinese girl, Foo Ling, daughter of Sam Ling of the :chop suey district.” There are childen from Michigan avenue, children from Clark street, and children from the “red light district.” And as to the noise? The neighbors have grown used to the cable cars, the rag man, the hurdy gurdy, and a hundred other things.

Seven New Grounds Planned.
The city, following the example set by the Woman’s club six years ago, has spent thousands of dollars in establishing and maintaining nine municipal playgrounds, most of them in congested districts. The grounds have been graded and fenced in. Cinder running tracks have been laid, and the field has been equipped with swings, merry-go-rounds, see-saws, and everything else necessary to the making of a healthy child. In the winter the fields are flooded for skating and free toboggan slides are put up.

Seven more playgrounds are to be equipped in the next year. One of these, in the heart of the Ghetto in the Ninth Ward, is the “orphan child” of Secretary O’Neill of the public playground commission. As there was no land available for such a purpose in that densely populated quarter, R. T. Crane Jr. gave the use of a vacant lot on West Twelfth street, between Jefferson and Canal streets. It was filled and graded at the expense of the Crane company. Mr. O’Neill has obtained an appropriation of $500 from a city council fund. Mrs. Henry Solomon of the Council of Jewish Women added $50, but $200 more is needed to keep the playground during the remainder of the season. Mr. O’Neill asks that subscriptions be sent to him at his office, room 206 city hall.

Chicago is producing the most perfect women in the world. The playgrounds, gymnasiums, and turner societies of the city are giving Chicago a generation of perfect women, free from ills, strong, self-reliant, and beautiful.

That the rising generations of Chicago girls will be more beautiful, healthful, and normal than the one preceding it is declared by authorities and the men who are instructors and trainers.

Health, strength, beauty—these three graces will adorn the women. Better nerves, better looks are being given to the girls growing up, and they will make better wives.

Chicago is the first of the American cities to realize that women as a race are deteriorating, physically, under the influences of city life, and to witness the effects of this city deterioration upon the girls, especially of the girls who work and the so-called “middle classes.” And better than that, Chicago has taken the step and leads the world in training girls to offset this condition.

The result is almost a transformation. Doctors, surgeons, and teachers give the same testimony. The playgrounds, parks, gymnasiums, and trainer societies, working with a better organized physical education in the common schools, not only are getting the effects of cramped life in a great city, but going beyond that, they are producing a race of women who are strong, agile, active, and handsome.

Startling Change Within Five Years.
Playground directors declare that even with the last five years the changes in the girls who come to the grounds is startling. They are stronger, better developed, clearer minded.