Ald. Lawson introduced the following resolution, which was passed:
WHEREAS, It appears by the records of the City of Chicago, that there are now two public parks designated by the name “Lake Park,” therefore
RESOLVED, That the park recently separated from the unoccupied portion of the old cemetery grounds, shall hereafter known and designated as Lincoln Park. 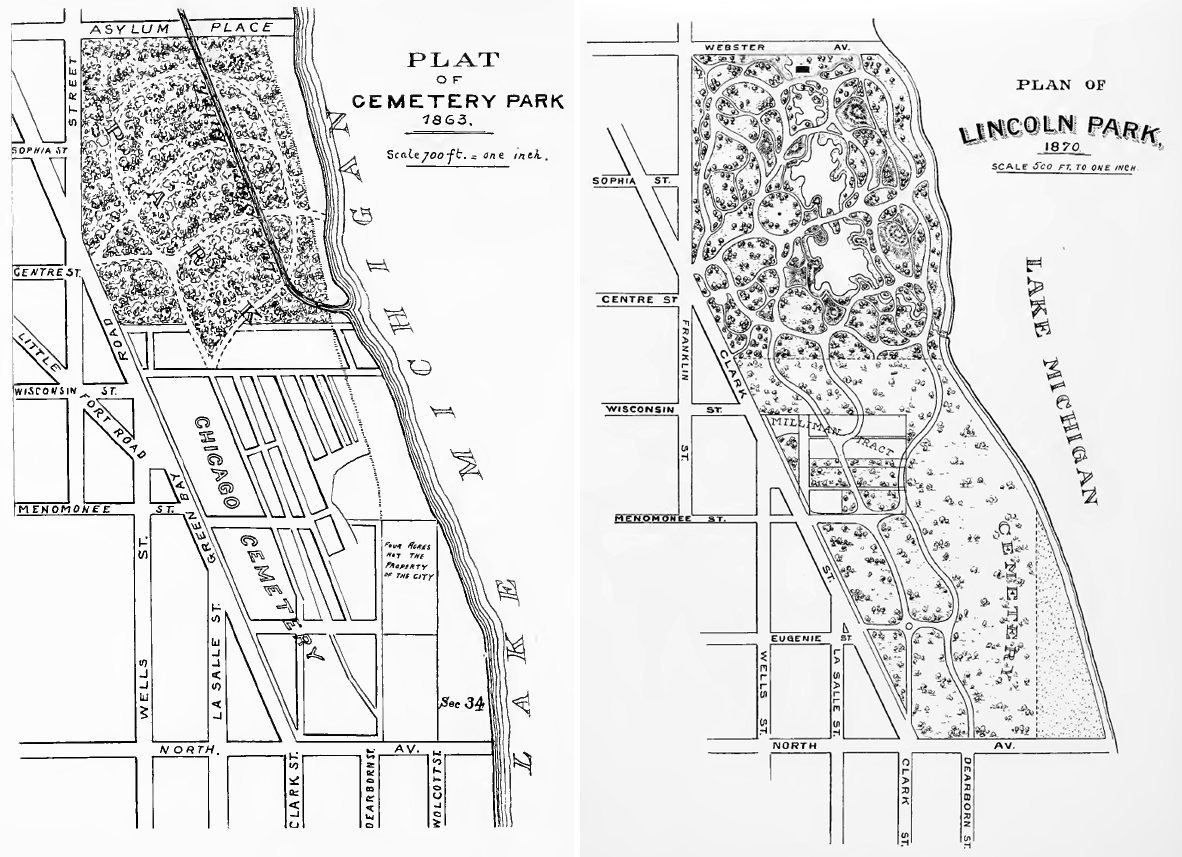 Report of the Commissioners History of Lincoln Park, Compiled by I. L. Bryan, 1899

It is certain, at least, that the foundations of Lincoln Park were laid in 1837, with the grant to the town of North Chicago of state lands for cemetery purposes, and in 1852, when under pressure of the cholera panic the city bought the land north of Fullerton Avenue for quarantine and hospital grounds. 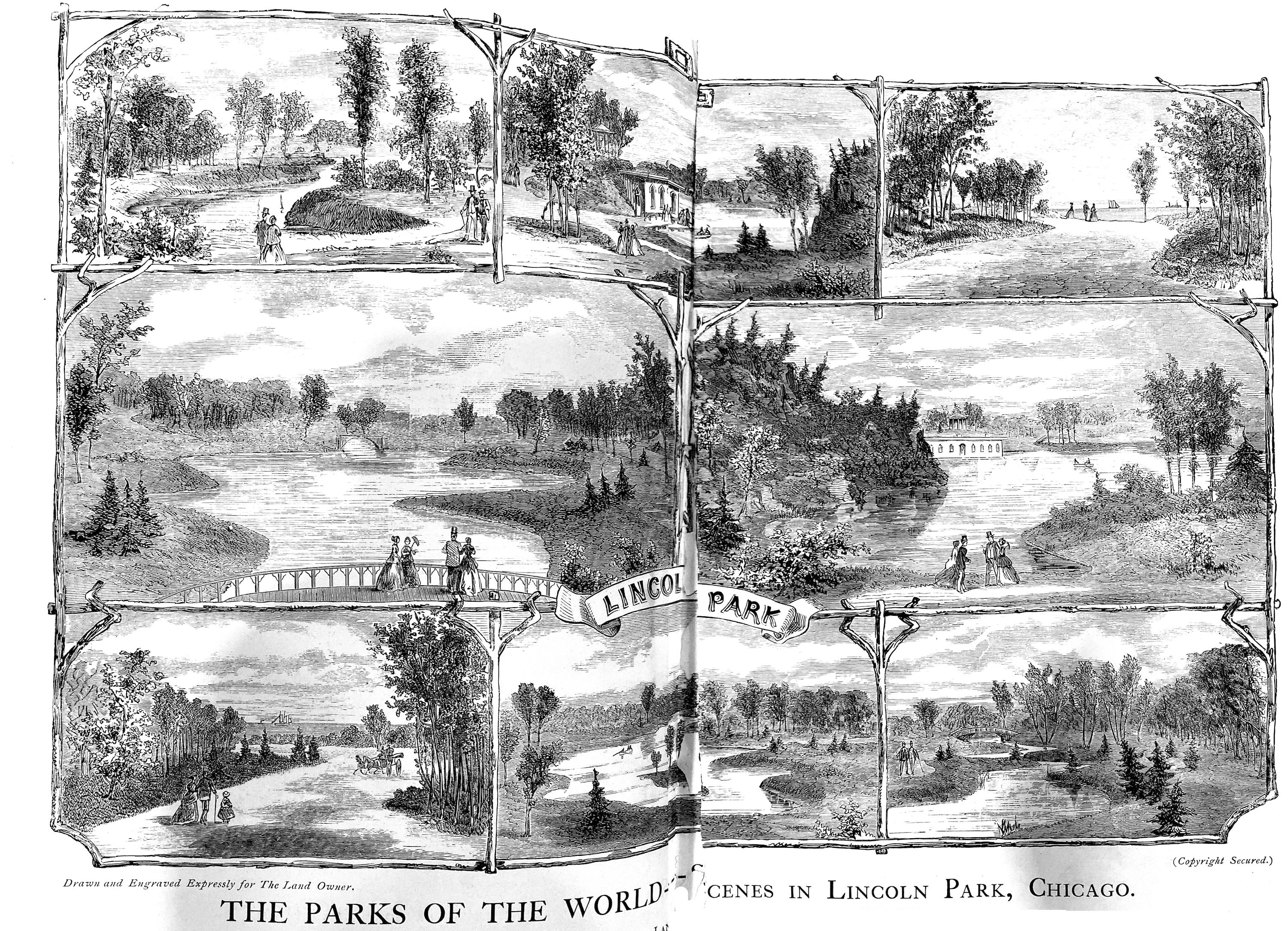 While the proceedings for the condemnation and purchase of land were under way, the Commissioners were also busily engaged in prose- cuting the work of park-making in the territory under their control with all the energy their funds and credit would permit. The com- pletion of the artesian well and the Lake Shore Drive, and the pro- tection of the lake shore, demanded the most attention. The great change that has taken place in Chicago customs since that time is shown by the fact that in April, 1871, a part of the work on the Lake Shore Drive consisted of “watching cows.” A charge of fifteen dollars for that purpose was made by the contractors, and similar charges recurred regularly during the summer months for a year or two. In that sylvan period residents of North Chicago still kept cows, and they pastured them during the day in the woods and fields north of Diversey Avenue. As they were driven home at night the cows, attracted by the greener browsing along the new drive, chose that route homeward to the great dissatisfaction of the Commissioners and their employes. The custom continued until the retaliatory practice of impounding the cows until they were bought out of pawn compelled the owners to take better care of them.

On July 29, 1871, the work of transforming the cemetery began with the passage of an order for the payment of eight dollars each for the removal of remains to other cemeteries, where the lots had been reconveyed to the city on condition of such removal being made. Similar orders appear on the Park records in the next few years, and the work was prosecuted industriously. In November, 1875, the city authorities notified the Commissioners that no more exchanges of lots could be made that year, as the appropriation for the purpose was exhausted. Because of the destruction of all plats and surveys of the old cemetery in the great fire, the task of removing to other cemeteries the remains of those who were interred there was attended with great difficulties. It was surmounted in the best way possible, that of retaining in the employment of the Park for many years the old sexton of the city cemetery, whose familiarity with the lots and the names of their owners was so great and his memory so accurate that he was able to locate any grave with little difficulty. 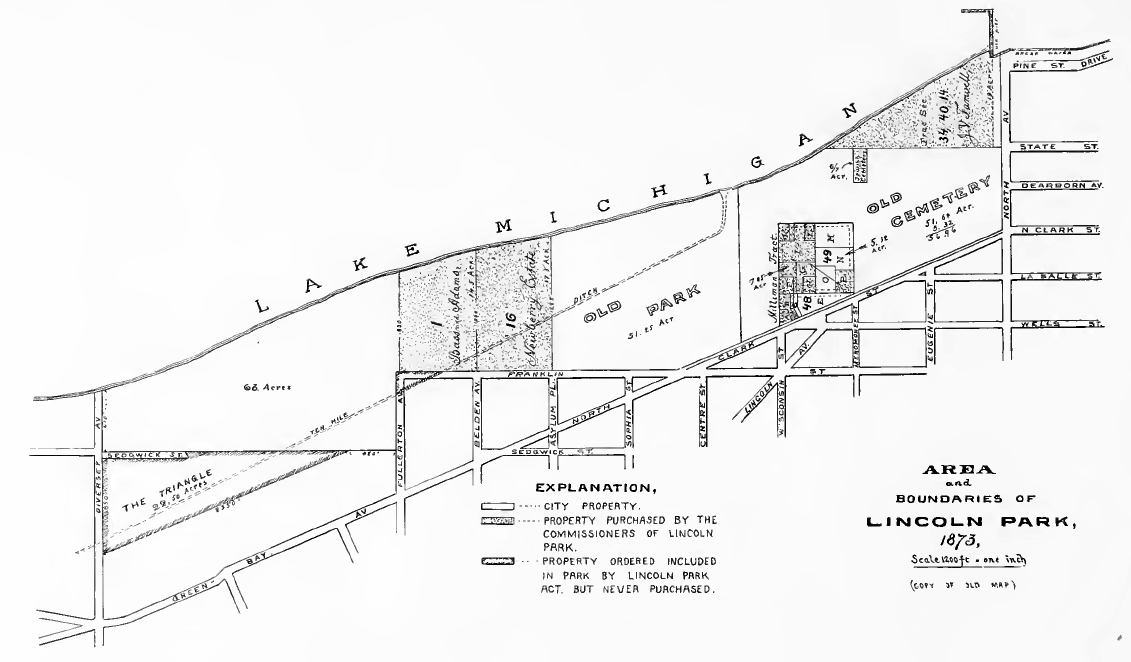 Area and Boundaries of Lincoln Park
1873

Later in the year a fence was built along the north line of the Park at Diversey Avenue, and in November contracts were made for grading, filling, and seeding the space between Diversey Avenue and the drive. Many of the Park records and the first assessment roll for the construction of the Pine Street Drive from North Avenue to Oak Street were burned in the great fire, and on October 28, the first meeting held by the Commissioners after the fire, all work was ordered stopped on its account. On November 28 the new Board of Commissioners appointed by the Governor by virtue of the act of June met, organized, and found the Park treasury at so low an ebb that it seemed to them good reason for keeping the work stopped until the April following. In April, 1872, the Commissioners found their credit good enough to secure a loan of S10,000 for four months at eight per cent interest. In May, as a part of the bargain for the Farwell tract, they paid Si 2,000 for a tug, three scows, and a dredge, and agreed to share for one year the expense of operating them in taking sand from the lake to a pier in the Chicago River and exchanging it there for clay. The clay was taken to the Park and stored in great piles, to be used as occasion demanded in the construction of roads.

In July the city was asked to police the Park more effectively, and in August, the city having failed to meet the wishes of the Board, the Lincoln Park police force was organized, with one sergeant and three officers. In May, 1873, the city ordinance limiting the speed on the Lake Shore Drive to six miles an hour was suspended for Tuesday and Friday afternoons, for the benefit of owners of fast horses, and in the same month negotiations were entered into with the city to assume the care and responsibility of the improved part of the Park.

There are indications that diplomacy played a part in the negotiations, the records showing an expenditure of S250 on June 18 for carriages and a band of music. City officials and aldermen were driven through the Park that they might understand the scale of the undertaking, and then they were serenaded and banqueted that the}’ might feel kindly toward it. The desired results were achieved without any apparent hitch or opposition, for on July 2 the Board of Public Works of the city made formal application to the Commissioners to be relieved from further care of the improved portion of the Park, and to transfer such care to them. On the following day the Commissioners met, and by formal resolution accepted the new responsibility and assumed the new expense from the 1st of July.

From that date the Commissioners appointed by the Governor have been the sole authority in the government of the Park.

At this time the old Park was considered a finished product of the landscape gardener’s art; and the Board of Public Works in their report published in 1873 included the following statement of the work which had been done there: 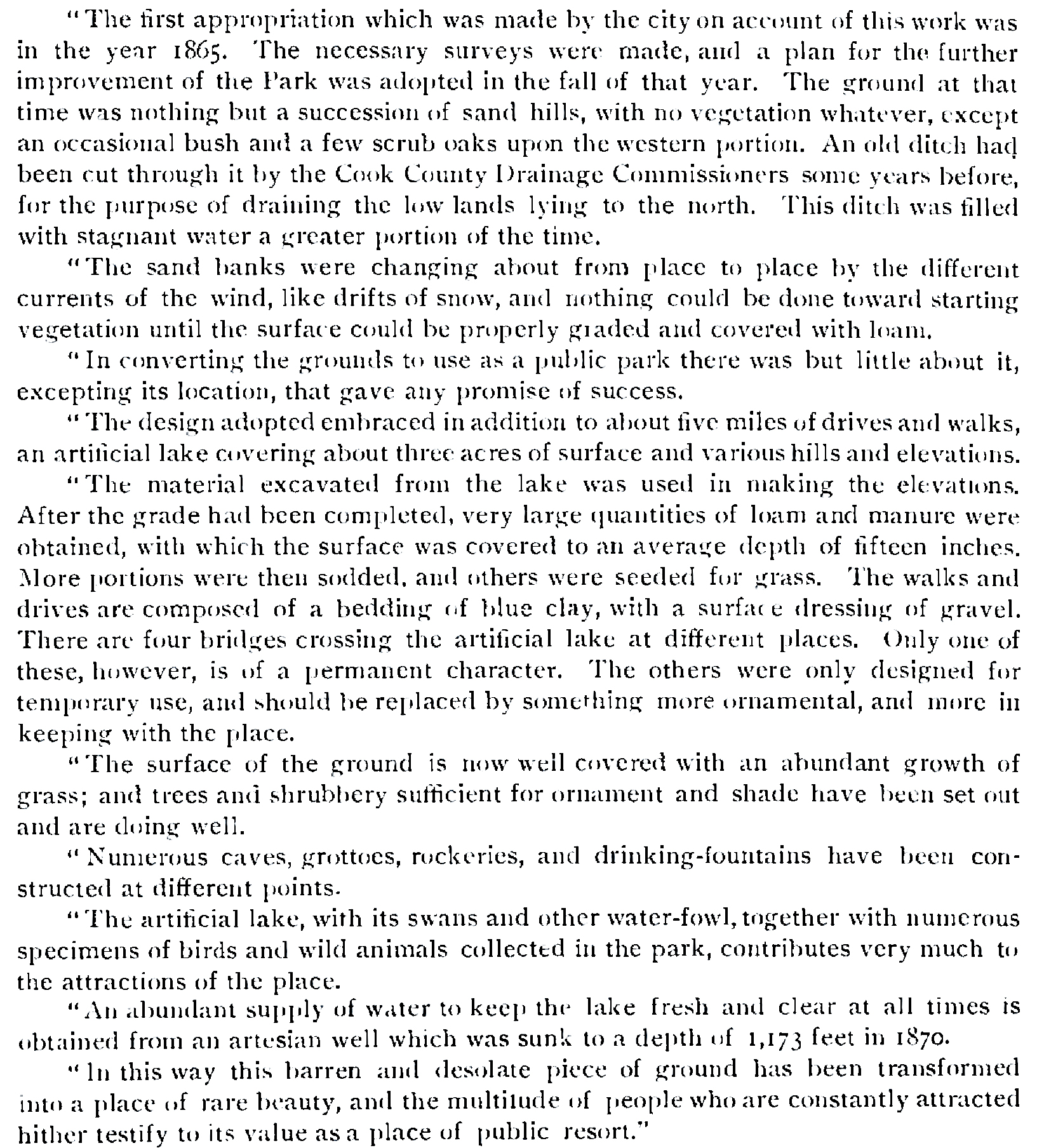 Few changes have been made in the arrangement of the walks, drives, and lawn spaces in the old Park since 1873. While willing to assume the expense of maintaining the improved part of the Park, the Commissioners preferred to postpone the necessity of organizing a force of workmen, and instead arranged with the contractors, Nelson & Benson, who had constructed the Lake Shore Drive and done much other work in the Park, to keep it in order, for a sum varying from $2,000 a month in the summer to S500 in the winter. The specifications for the work required, among other things, that drives and walks be kept in repair and sprinkled while necessary; that the lawns be weeded, mowed, and watered; that the leaves be raked up in the winter; the bridges kept in repair; and the animals and birds in the Park fed and cared for. The provision of the contract which reads most strangely to-day is one that the public should at all times have free access to some portions of the grass, designated by the captain of police, and marked “common,” but that “not more than one-sixth of the lawns should be opened to the public in any one day, except on Sundays and concert days,” when more freedom was to be allowed. The soil was so poor, and the facilities for watering the grass, which grew sparsely in the Park, were so meager, that the only way the lawns could be preserved at all was by giving them a long rest after each short Period of use- The Park was so popular by that time as a place of public resort and so crowded on Sundays and holidays, that the lawns would be badly trampled on such days, and a week’s rest be necessary to revive the grass. The contractors were to render the police department of the Park all needful assistance in preserving order and good will, by employing only “such men as are sober and orderly, and civil when spoken to by visitors.” All flowers and plants that might be placed in the Park, the contract provided, should be planted, watered, and cared for in a proper manner.

No expenditure for plants or flowers is reported, however, in the annals of Lincoln Park, until June, 1874.

Report of the Commissioners History of Lincoln Park, Compiled by I. L. Bryan, 1899 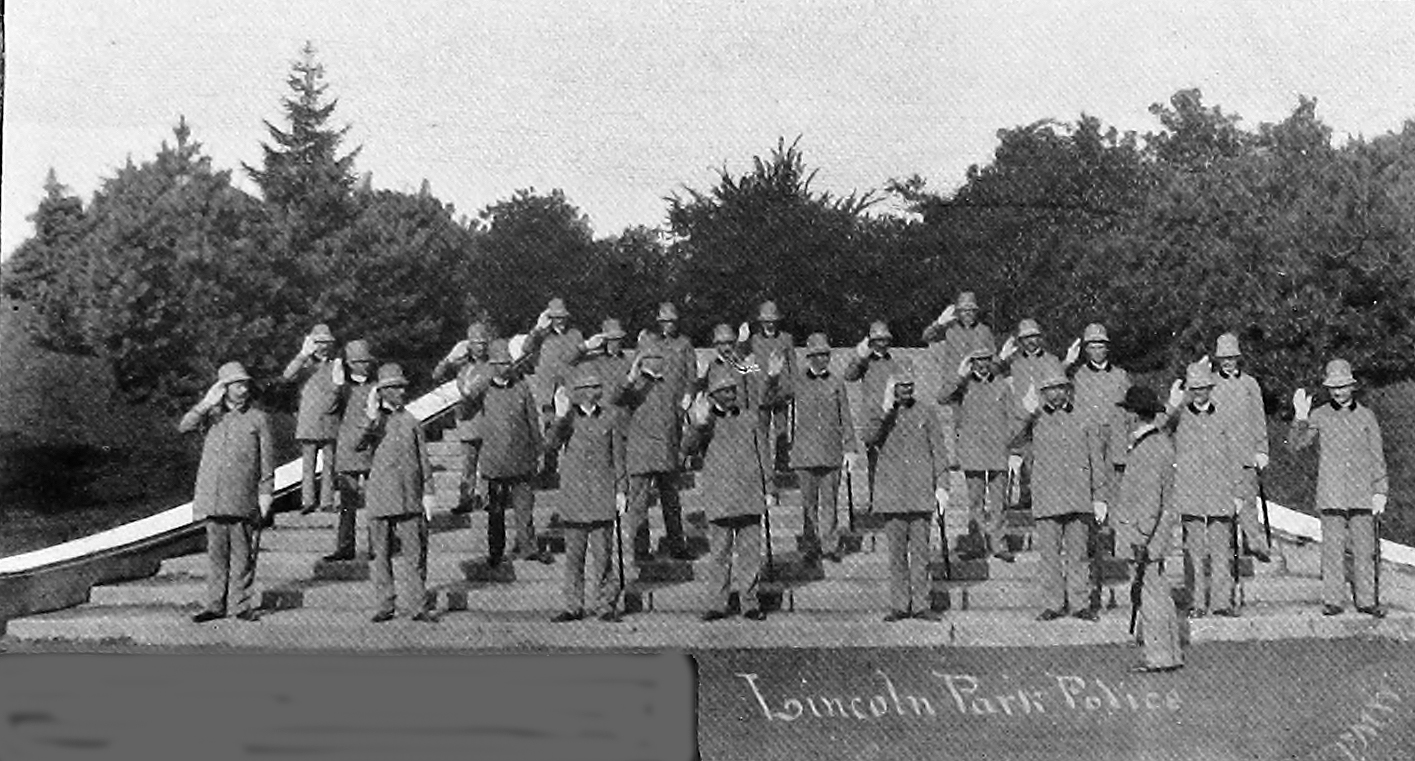 The gray-coated officers of the Lincoln Park police force, who preserve order in the Park and on the boulevards, make a picturesque as well as a necessary institution, which has grown with the growth of the Park. For the first three years of their rule, the Commissioners relied upon the city police for what protection might be necessary on the Lake Shore Drive and elsewhere outside of the old Park.

It was not until August 2, 1872, that the Park force was organized, with a sergeant and three officers. When control of the old Park was relinquished in 1873 by the city, the Park force was increased to seven men. For a number of years there was small need of policemen in the winter months, and to keep the force intact and save useless expense, the officers were allowed to lay aside their uniforms and serve the Park in the winter as carpenters. With the growth of the Park and the extension of Park control to many boulevards, additions to the force have from time to time been necessary, and under the present administration it has varied from twenty-three men in the winter months to twenty: six men in the summer, a third of the men being stationed on the boulevards.

Owing to the uniform good behavior of visitors to the Park, the duties of the officers in the matter of making arrests for violations of Park ordinances are not burdensome, the total number of arrests in the fiscal year just closed (1898) being 132.

Bicycles having become an established and recognized institution, half of the officers, including nearly all those stationed on the boulevards, patrol their respective beats on wheels.

The Park police are under the immediate supervision of Captain Richard DeShon, who entered the service in August, 1873, and has been in the department continuously since that time, except for one period of four years. Among the important duties of the members of the force are those of assisting visitors to the Park to find their various destinations, protecting flowers, birds, and squirrels from the assaults of small boys, regulating the speed of bicycles on the boulevards and drives, and looking after the interests of lost babies.

The total expenditures charged to the account of the police department have been $343,266.60.

Artesian Well Entrance to Lincoln Park at the foot of St. James Place.
1899 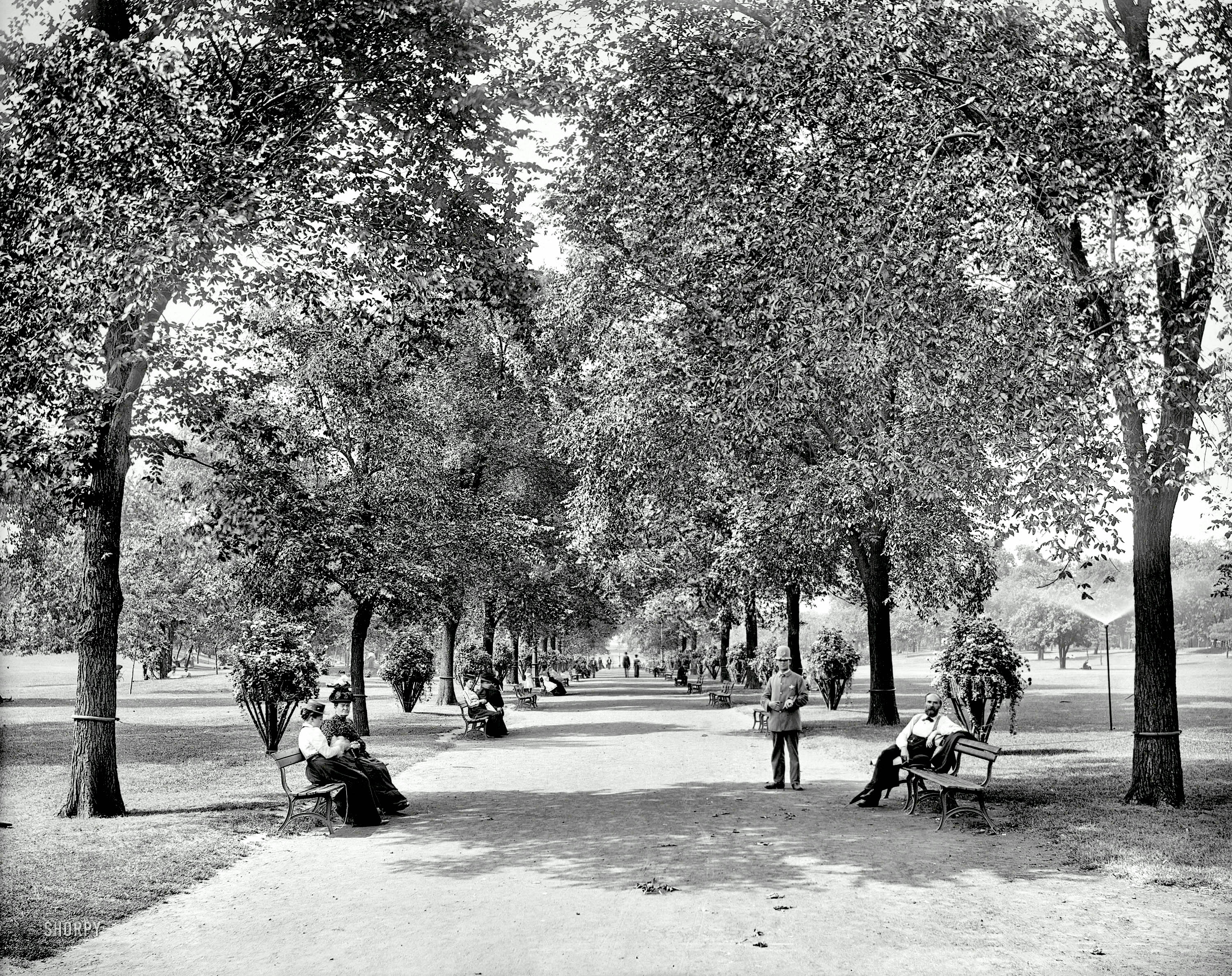 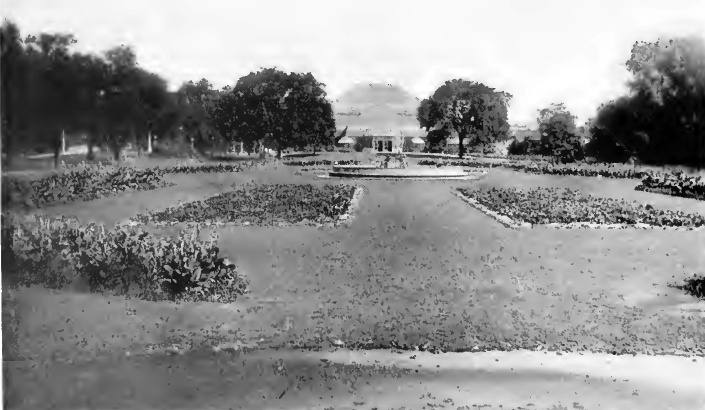 Lincoln Park Gardens, With Conservatory in Background
Famous the World Round 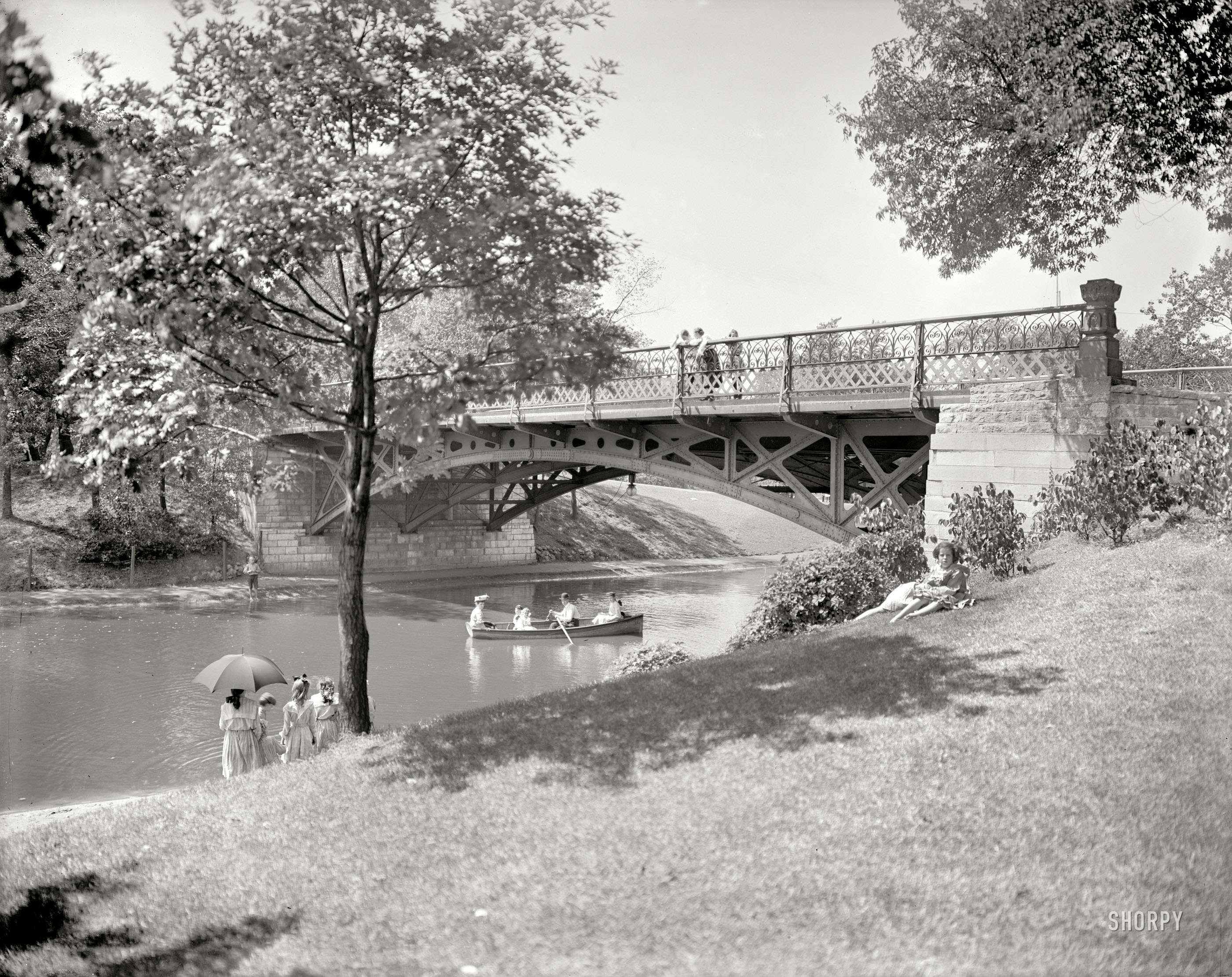 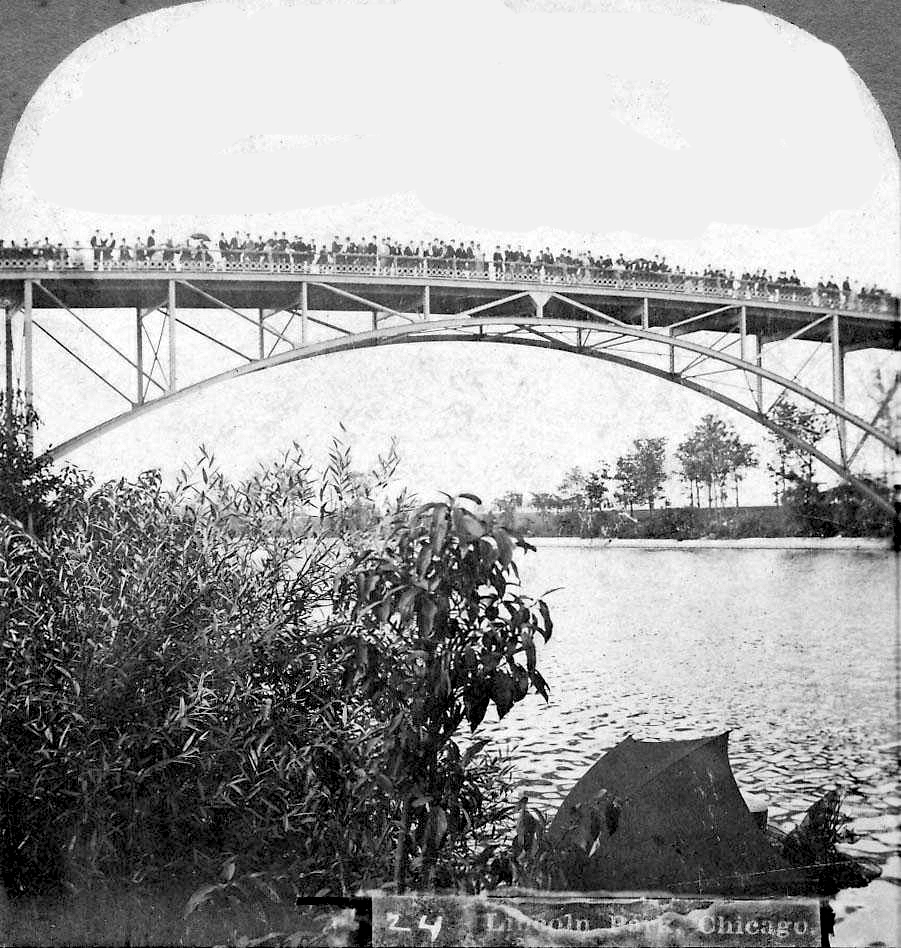