A Chicago physician, Dr. Frank H. Blackmarr was a passenger aboard the Cunard Line steamship RMS Carpathia when it received the distress signal from the sinking ocean liner RMS Titanic in the early morning hours of April 15, 1912. Captained by Arthur H. Rostron, she arrived on the scene at 4 o’clock in the morning after working her way through dangerous ice fields. The crew was able to save 705 people. Significantly, Dr. Blackmarr was notified immediately by the Marconi operator with whom he had struck up a friendship, and was very aware of the dire implications. He not only helped to care for the survivors, he recorded his observations to provide information for the press, including a transmission sent by the radio operator [whom he bribed] to the Chicago Tribune, this without the consent of the captain. Advising the approximate number rescued as being 700, mostly women, with 2000 lost, he subsequently recorded statements from some of the survivors, adding annotations and eventually photographs to fill a scrapbook used in lectures he gave afterwards.

The HMS Carpathia was sunk in the Atlantic on 17 July 1918 during the First World War after being torpedoed by an Imperial German Navy U-boat. 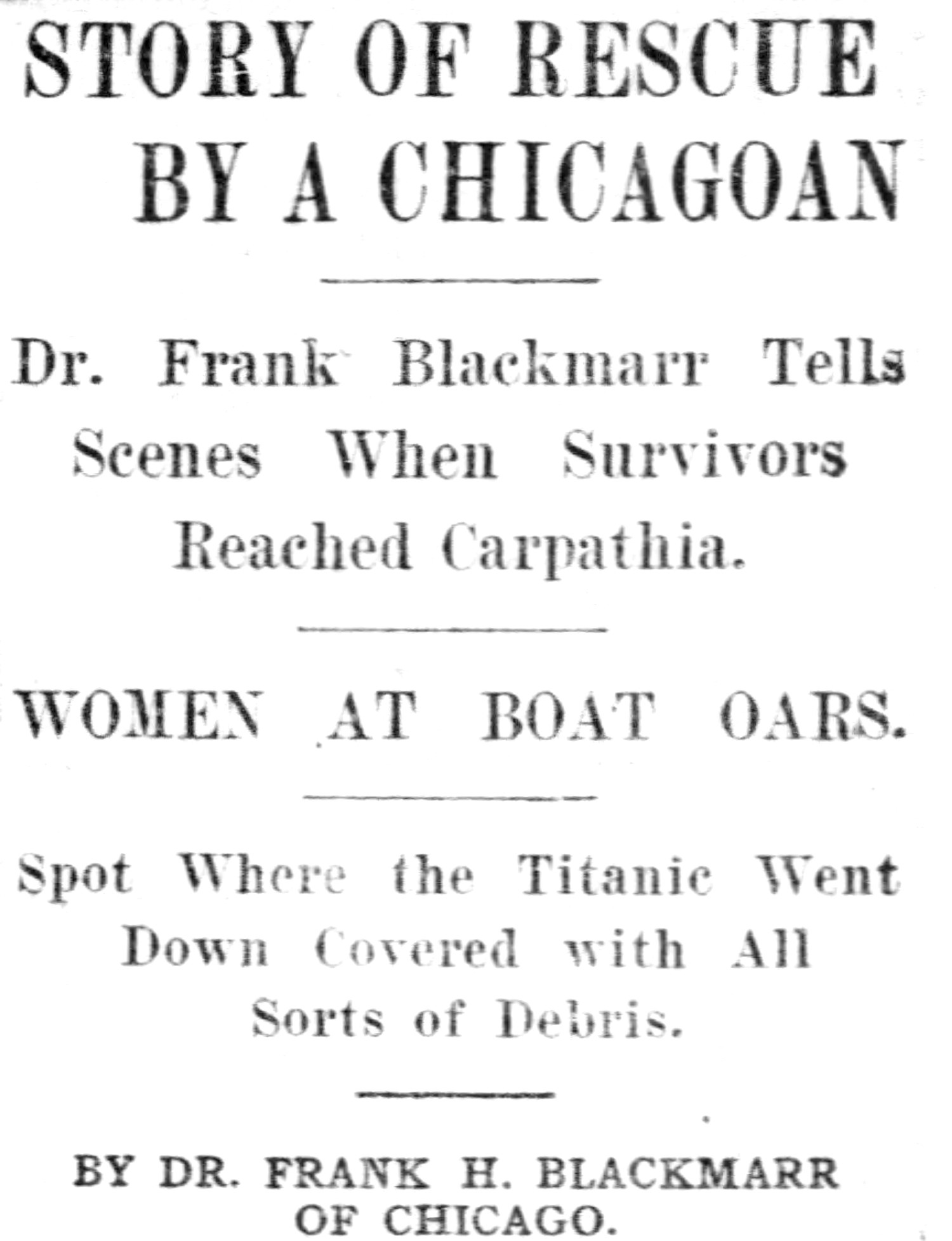 BY DR. FRANK BLACKMARR OF CHICAGO (A passenger of the Carpathia) New York, April 19—(Special) On Monday morning at 1:15 the Carpathia’s wireless operator, Harold Thomas Cottam, picked up a distress signal from the steamship Titanic. It was the habit of this boy before retiring for the night to pick up the nearest ship and say “Good Night.” Having received the distress signal he at once notified the officers of the ship. When we arrived at the spot the Titanic had sunk. The sea was covered with wreckage of all kinds, mahogany splinters, white enameled wood, silk covered couches, pillows, and mattresses. We all saw a woman’s hat floating in the debris. One fur coat floated by, suspended on a piece of wood.

From near at hand and from a distance, too, lifeboats were coming towards us, women occupying rowing seats in many of them, with a man at the tiller. Not a sound escaped their lips; no hysteria was in evidence. Their faces were pinched with cold. The task of raising them from the lifeboats to the ship’s deck was difficult. The women with their blistered hands found it hard to climb any ladders. The majority of them were lifted in by a swing which consisted of a board with a rope from each side, connecting with a single large cable.

Ready to Aid Survivors
Officers, stewards, and stewardesses had been on duty for hours preparing to receive them. These same officers and crew after that had no opportunity to lie down for a rest until their journey was over.

Many of the women that came in the boats shuddled together in the seats witha dead sailor lying in the bottom of the boat.

When asked why it was there were so few men saved – an estimate of one in five – a woman passenger who had lost her husband said she begged him to get into he boat with her, but that he refused out of sympathy for the poor fellows who were left. 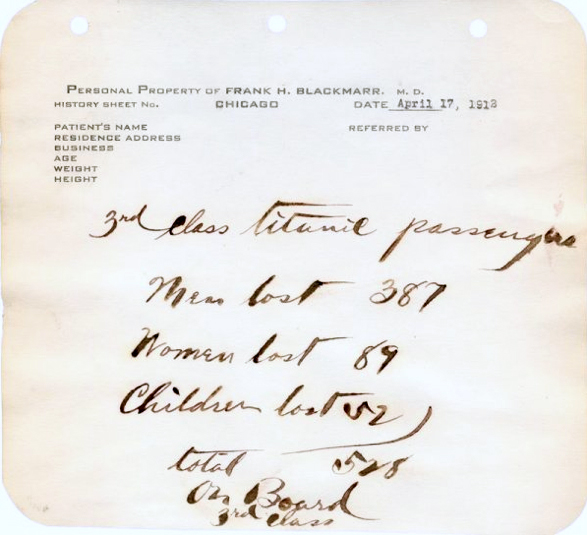 Col. Astor, it is said, after placing his wife in a boat, as did some of the other rich men, returned to the middle of the deck of the Titanic, folded his arms, and went down with the ship. The conduct of these rich men goes to prove they were heroes.

The only panic at the beginning, as I understand it, was in the steerage, where there were many persons who lacked self-control. There was no shooting, as I learn, except that a steerage passenger told me he saw an officer trying to control the maddened rush by shooting two persons. The same officer shot himself a minute later.

Climbed Ledge to Safety
The stairway of the Titanic was so crowded with steerage passengers that it was utterly impossible for some to gain the upper deck. One man told me he climbed along the ledge of the boat until he reached the deck where he loosened a collapsible boat. A moment later the lifeboat was filled on its edges with women, children, and men. It began to sink with the load, and the women and children at the edge gradually slipped off, into the ocean.

The saddest moment of all, after the boat loads had been landed on the deck, was to see the poor widows and sons and daughters whose family relations had been broken, standing at the rail, looking into the distance with hands outstretched trying in hope to see their loved ones. There were numerous sick persons on board, but the illness was not so such physical as it was mental agony. 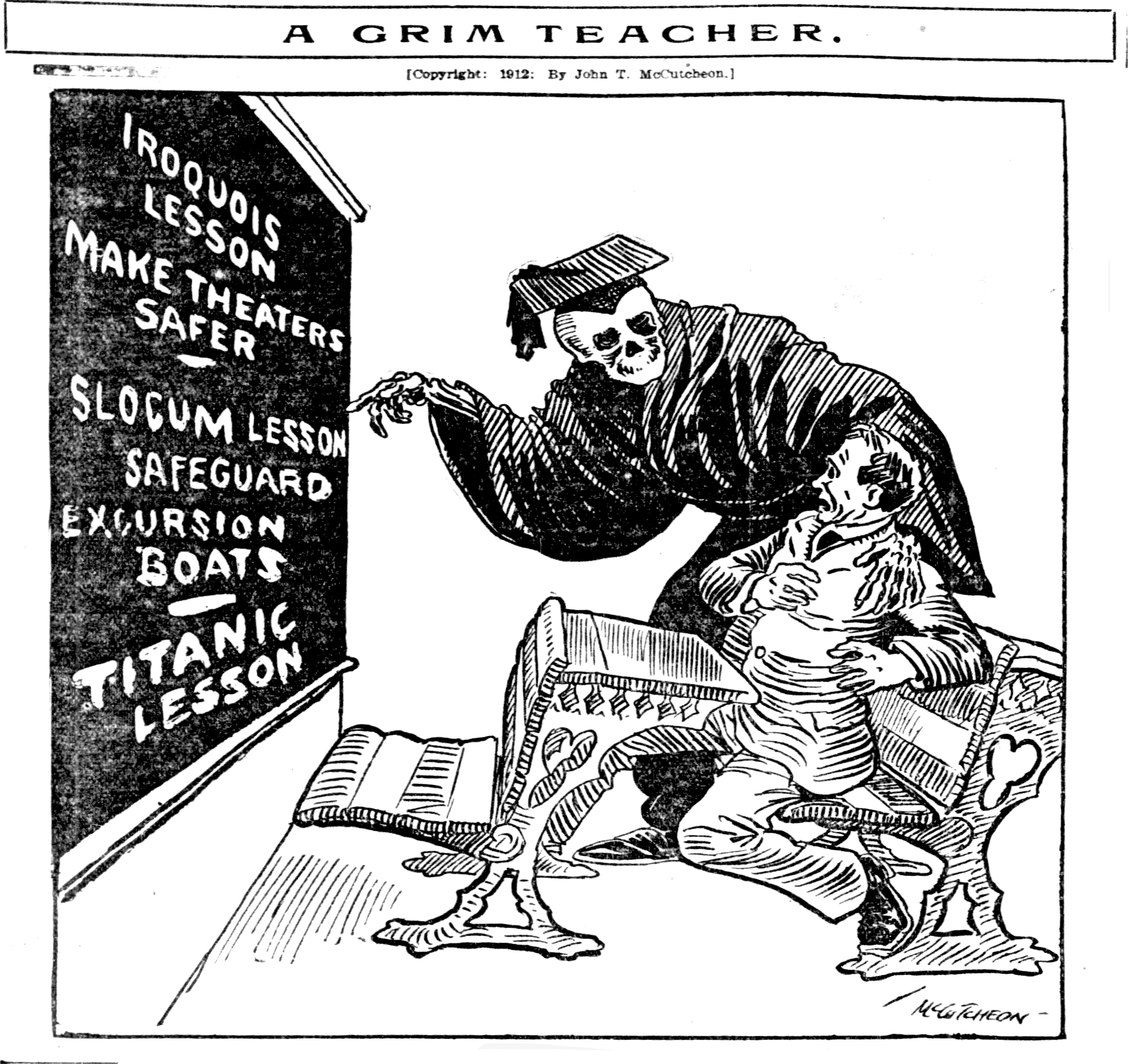