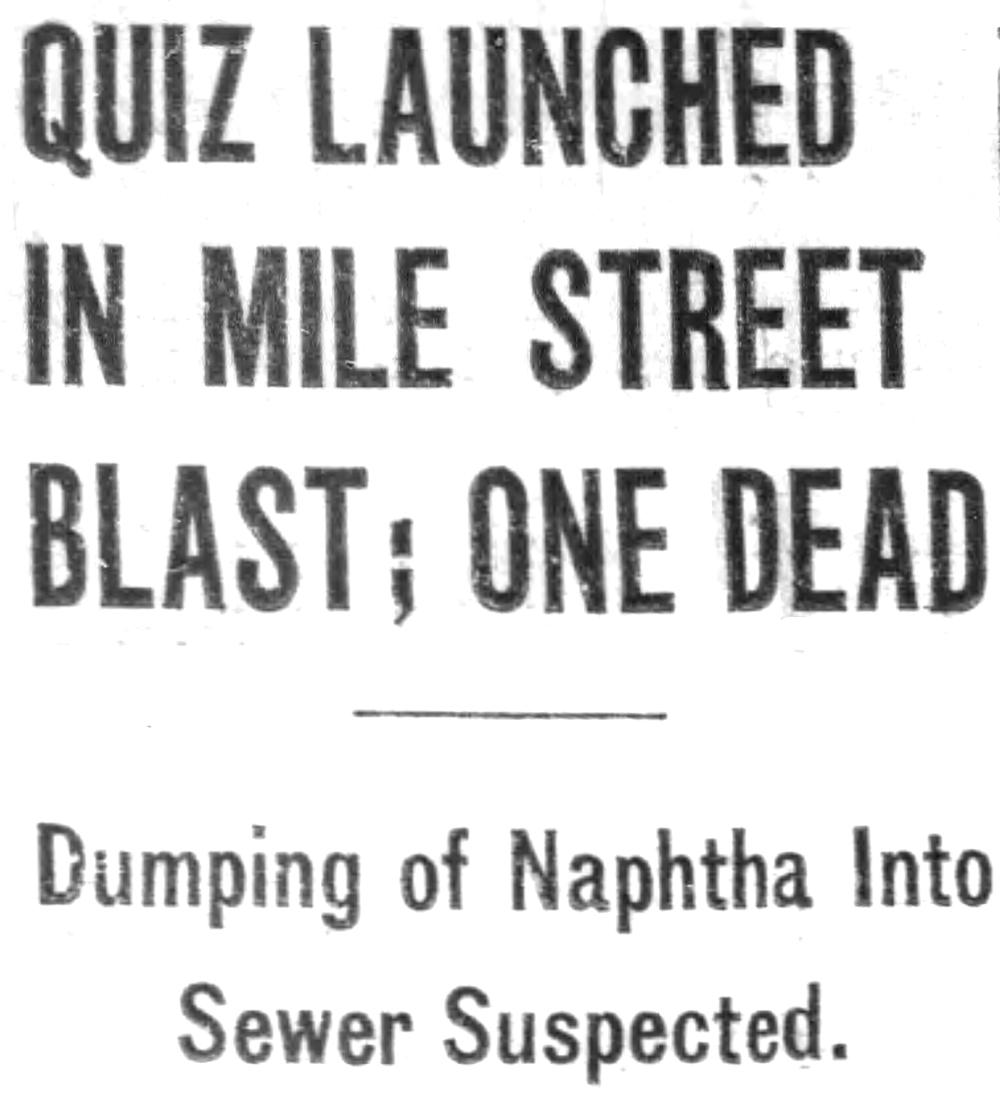 Fire department officials last night were investigatmg the possibility that naphtha or other inflammable materials, dumped into the sewers by cleaners in defiance of the law, was responsible for yesterday’s disastrous sewer explosion in Fullerton avenue.

The blast, which caused panic in the Fullerton and Milwaukee avenue business district blew seventeen manholes from the Fullerton avenue sewer over a stretch of a mile between Kedzie and Western avenues. One of the 155 pound covers, hurled to the top of a five story building, fell through a skylight and down the elevator shaft, killing an elevator operator. Another cover barely missed a street car.

Investigate Gas Possibility.
While great importance was attached to the theory that waste material from some of the many cleaning establishments in the district caused the explosion, some or the investigators believed that illuminating gas, seeping in from leaks in the mains, was responsible,

The city has strict regulations against dumping any inflammable or explosive materials into the sewer and they are as rigidly enforced as possible. Officials said, however, that it would be virtually impossible to prevent such dumping completely or to detect it at once.

Heavy Gas Odor Noted.
For some days, a gas odor had been detected in the neighborhood. Gas company officials said they had investigated it and found it was caused by naphtha or gasoline. Shortly before the explosion at 10:05 a.m. the odor was said to have been particularly strong.

Witnesses said they first heard a low rumble, then a clap like that of thunder, that resounded along the avenue. Although there was no fire, a white vapor burst from the sewer as the manhole covers began flying into the air.

The greatest force of the explosion was felt at the intersection of Fullerton and Milwaukee avenues. Near this intersection in the Hollander warehouse at 2418 Milwaukee avenue, Albert C. Day (right) was preparing to take his elevator up from the first floor to the third.

Cover Strikes with Crash.
Two men who had iust loaded it with furniture were with him. Suddenly there was a crash as a manhole cover plunged through the skylight and down the shaft. It struck Day, a man of 57 residing at 5642 Melrose street, killing him instantly. The others escaped with sllght injuries, although the furniture was knocked down upon them.

At the same moment another manhole cover was crashing through the roof of the Milwaukee Avenue Motor Sales service building at 3030 Fullerton avenue. It fell beside two employees without touching either. 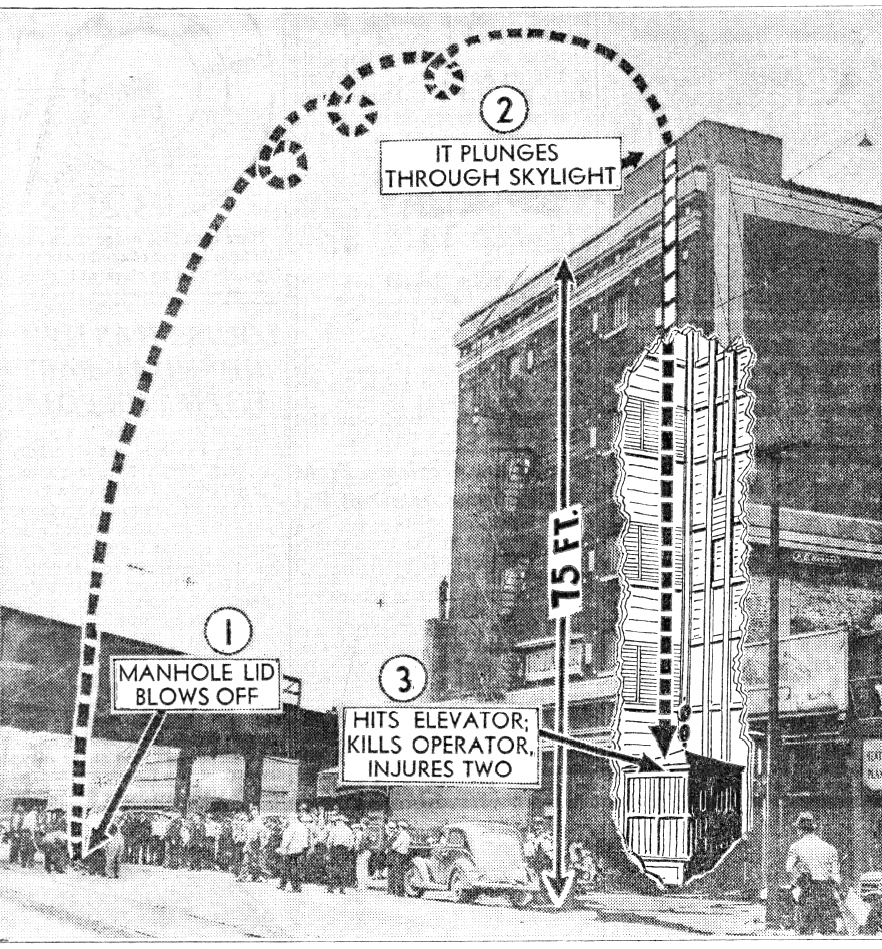 When a subterranean explosion tossed many manhole covers on Fullerton avenue into the air yesterday, one of the lids was blown high and crashed down the elevator shaft of the Hollander Storage and Moving company at 2418 Milwaukee avenue, killing the elevator operator, A. C. Day, 57 years old, of 5642 Melrose street. Two others on the freight elevator were slightly injured. Dotted line shows missil’s path.

Two Women Injured.
Mrs. Madeline Kramer, 59, was at the telephone in her apartment at 2953 Fullerton avenue when a piece of debris broke her window and struck her arm. In the same building Mrs. Genevieve Christiansen was knocked to the floor by another fragent from the blast.

Hoping to prevent a repetition of the explosion, Thomas B. Garry, suerintendent of sewers, sent out men to replace the covers with new ones that are perforated. These, he said, should allow gas to escape before it could cause serious damage.

Arrow indicates location of the Hollander Storage and Moving company at 2418 Milwaukee avenue. The map reflects the stretch of Fullerton avenue between Kedzie and Western avenues that 17 sewer covers blew off. 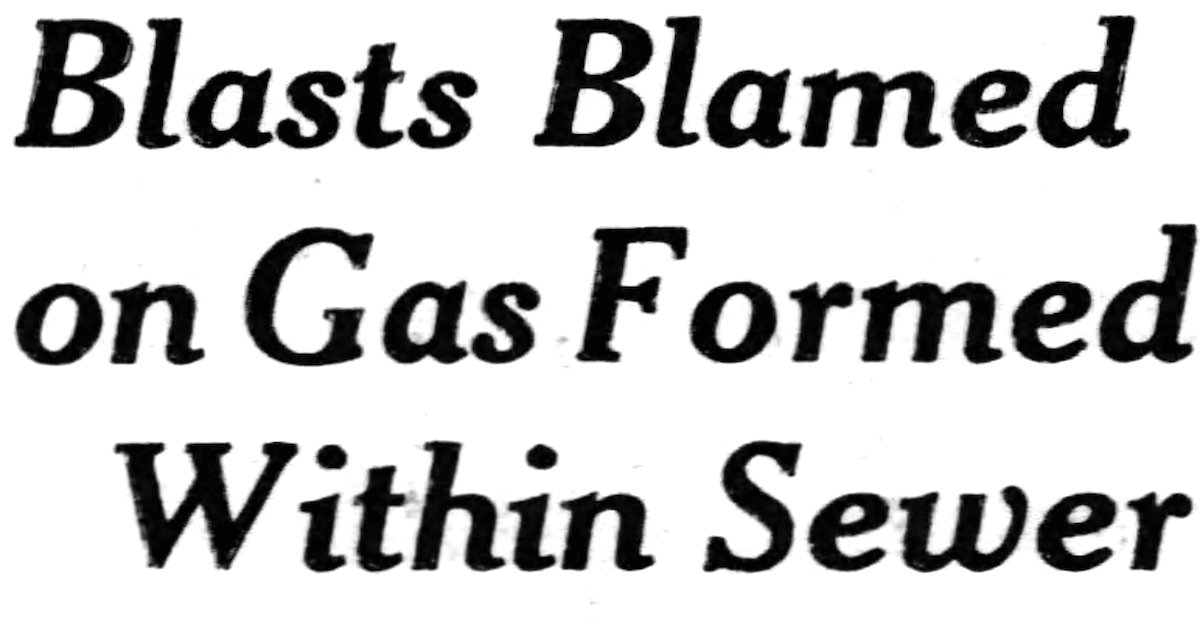 Mysterious explosions that shook the Austin district along two miles of Cicero avenue before dawn yesterday were blamed last night upon gas generated by some inflammable liquid in the Cicero avenue sewer.

Thomas D. Garry, city superintendent of sewers, said he believed that a fluid such as gasoline or naphtha had found its way into the sewer and formed a vapor which had been accidentally ignited. Fire department officials held the same theory. Both police and firemen said they found no evidence that the explosions resulted from a May day plot.

The blasts filled the air with heavy manhole covers, shattered windows by the hundred, and awakened thousands of persons. Three persons were injured.

Woman Burned In Home.
Mrs. Mary Kopystynski, 43 years old, was severely burned when a sheet of flame passed through her frame house at 641 North Cicero avenue. All the windows were broken. Firemen said they believed the flame and the explosion that accompanied it came through a catch basin.

David Biggerstaff, 22, of 320 North Lamon avenue, was hurled to the pavement by the force of one of the explosions at Fulton street and Cicero avenue.

Bernard Waegeleln, 29, of 2630 North Kilpatrick avenue, was injured on the hand when his car was thrown into the air and turned around in the 4900 block of Chicago avenue.

Cover Fierces Top of Car.
A 150 pound manhole cover crashed through the top of Mrs. Brendar ClarkBs unoccupied automobile, parked in front of her home at 4738 Washington boulevard.

The explosions followed the Cicero avenue tunnel from Harrison street to Kammerling avenue, and extended in some cases more than a block on either side. Most of the damage was to stores from 400 to 700 In North Cicero avenue and to apartment buildings in Washington boulevard.

The explosions recalled those of May 29, 1937, in the Fullerton and Milwaukee avenue district. The blasts there were traced to inflammable liquids in the sewer. The fluids were believed to have leaked in from cleaning establishments or filling stations.

Yellow line bounds area in which sewer explosions occurred yesterday. The numbers show where injuries were caused by the blasts: