THE CHICAGO STRIKE.
At six o’clock on Saturday morning, October 6th, the conductors, drivers, and “cable-grip” men of the North Side horse-car and traction lines in Chicago went on a strike. These lines are owned by a company of which Mr. Yerkes is president, some of whose stockholders are interested in Philadelphia, Pittsburgh and New York lines, while in Chicago it also controls the cars on the West Side. The strikers complained that they received less wages from the company than its West Side men, and that their hours off duty were so divided as to give them insufficient sleep. These and other complaints had been laid before Mr. Yerkes, who declined to make the desired changes.

The first disclosure was that both sides had prepared for the contest. The men had got together all sorts of wagons for carrying passengers, although these accommodations proved insufficient, and thousands had to walk. The company, on its part, already had men on the way from Philadelphia, Kansas City, and elsewhere; but while some horse-cars were run on Monday, the new-comers were far from being enough to restore the full service. Meanwhile, the West Side men had voted sympathy, although making no complaint of their own treatment. The North Side men, in a conference held at Mayor Roche’s office, made proposals for wages on the West Side basis of twenty-five cents an hour on grip cars, twenty-three cents on “trailers,” or those attached to grip cars, and twenty-one cents on horse-cars. The company offered less on each of these classes, and also declined to discharge the new men just engaged, and accordingly on Tuesday the West Side men went out. 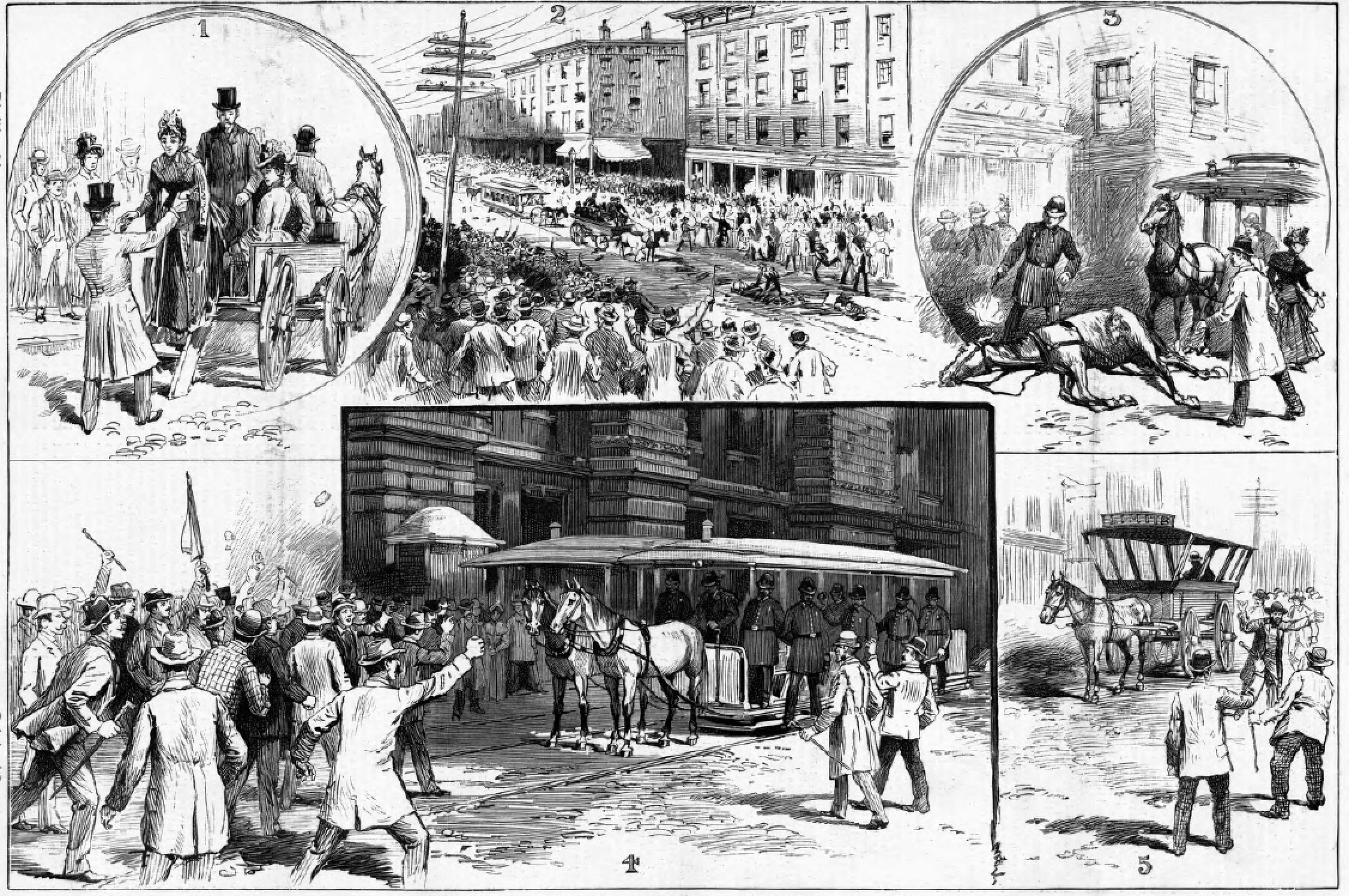 The situation was now serious. Instead of 500 men on strike there were 2000, and a large area of the city was without cars. The feeling became bitter, and all the available police force
watched the company’s property. Stones, earth, boxes, barrels, and what not were dumped on the
tracks, and switches were misplaced and spiked. Nevertheless, guarded by police, a few cars were run that afternoon in spite of the dense mobs that attacked them with sticks and stones. In the neighborhood of Garfield Avenue and Orchard Street the police charged the crowd, and many persons were clubbed. At the Western Avenue barns the cars were assailed with stones, and Superintendent NAGLE, who drove one, was knocked down by a man whom the police felled in turn, and carried off after a sharp struggle.

The worst outbreak occurred on Wednesday. Police had been massed at the barns, or stationed in squads of four at the street corners, or hurried hither and thither in crowded patrol wagons. In the afternoon two car superintendents emerged in a vehicle from the barn on Western Avenue, near Park Avenue. Stones and sticks greeted them from the howling crowd. The horse dashed across Madison Street, and the superintendents fired their revolvers. A policeman followed and arrested them for this firing. About four o’clock a car was started on Madison Street with police on the platforms. Again the air was alive with missiles, and Lieutenant Shea, heading a large police force, charged the mob. Many of his men were struck, and Captain Aldrich, who directed the attack from his buggy, was severely hurt. The police did great execution with their clubs, but though sorely tried, refrained from using their drawn revolvers. At Oakley Avenue the car was again attacked, but the police dispersed the crowd with a club charge. The car finished its route and returned to the barn. It was the only one moved on the West Side that day, and it is said that the driver was promised and promptly received a large reward for his perilous journey, which cost him severe bruises, On the North Side more cars were run; but a gang of laborers on the Garfield Avenue track, near Indiana Street, was attacked while removing obstacles, and several were injured. The police charged the mob with clubs, and many of the rioters were carried into the drug stores to have their scalp wounds dressed. A big bag of flour or of plaster of Paris thrown from near the top of a building caused a general scattering by its noise and dust, it being taken for a bomb. At one point two tar barrels were blazing on the track, and other bonfires were lighted at night, and crowds tore up the tracks. A conference of the Mayor, Mr. Yerkes, and the strikers led to no agreement.

On Thursday two cars, with policemen and reporters as passengers, moved on the West Side through dense mobs which filled Madison Street for two miles. At two points only were the police compelled to charge the mob. An omnibus containing new men was attacked, amidst cries of “Scabs,” but the police dispersed the assailants. On the North Side more cars were run, being hauled on the pavements around stretches of broken track until rails were reached again. A few small railroad torpedoes were exploded on the track under one car, startling its occupants, but doing no harm, while a few missiles said to contain dynamite and others containing only plaster of Paris were found.

By Friday the service both on the West and North sides had become much more frequent. A chilly rain had diminished the number and dampened the ardor of the lookers-on, and disposed more people to risk a trip in the cars rather than walk. At night a new committee of strikers again proposed for the North Side men the West Side rates, the old men to be taken back, and the new men retained, but put at the foot of the list for duty. The West Side men having said that they struck because they feared reduction should the North Side men be beaten, Mr. Yerkes declared that no reduction was thought of. As the result of this conference, the West Side men returned to work on Saturday morning, October 16th, and a conference was held with the North Side men, which is going on as our account closes. 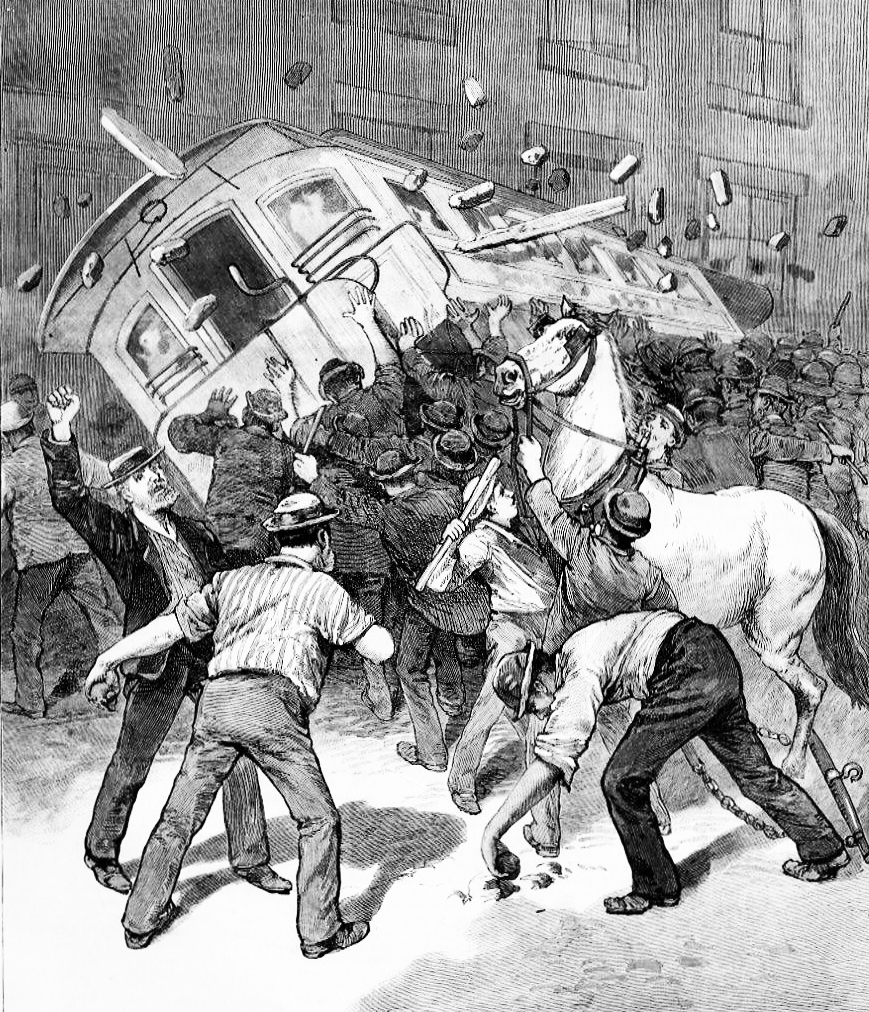