By Stephan Benzkofer
“Injun Summer,” an earlier era’s celebration of autumn and childhood imagination, took on a life of its own — almost literally.

The famous cartoon first appeared on Sept. 30, 1907, on Page One, the answer to a looming deadline on a slow news day. John T. McCutcheon, inspired by a string of beautiful, warm autumn days and remembering his youth in Indiana, conjured up the illustration that became one of the most popular features in Tribune history.

The cartoon wouldn’t be contained to its annual appearance on newsprint.

The Indiana State Fair reproduced it as a feature exhibit in 1928. At the Century of Progress World’s Fair in 1933-34 it was a life-size diorama and was reproduced in a fireworks display. 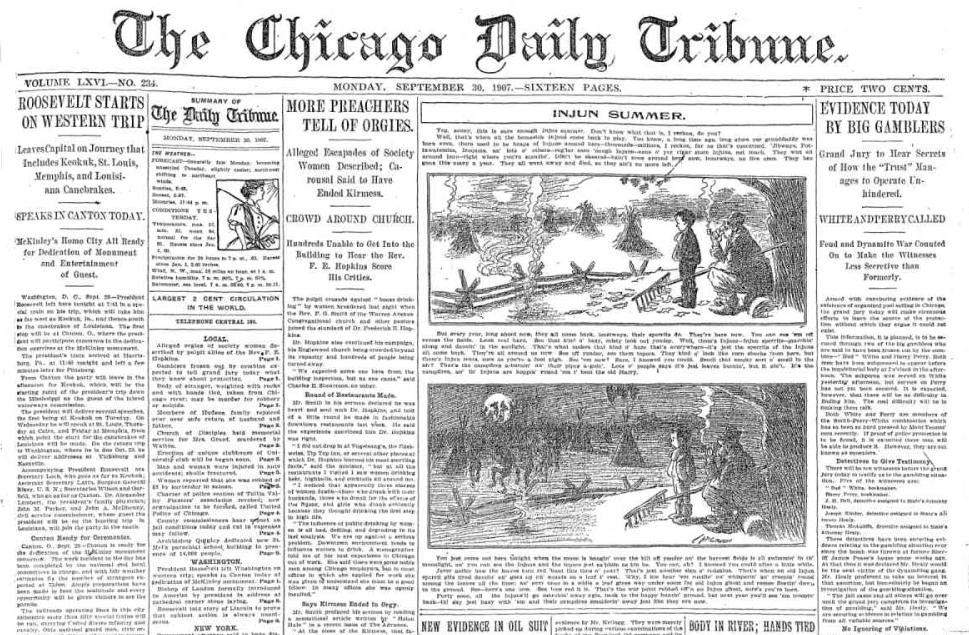 In 1920, the Indiana Society of Chicago presented a dramatized version of the work to honor McCutcheon. His son, John Jr., a future Tribune editorial page editor, played the boy (right). Neighborhood, school and social groups acted out “Injun Summer” scores of times, as recently as 1977. One of the biggest dramatizations involved 1,100 children performing it at Soldier Field in August 1941 as part of the Tribune-sponsored Chicagoland Music Festival. A very popular display with mannequins appeared every year at the Olson Rug Co.’s park on the Northwest Side. McCutcheon’s original black-and-white drawing is in the collection of the Chicago History Museum.

Over time the cartoon came to evoke anger as well as nostalgia. As early as 1970, readers wrote letters complaining that the Tribune was running an ethnically insensitive feature that misrepresented the brutal reality of Native American history in the United States in the 18th and 19th centuries. Letter writers also were unhappy with the idea that “they ain’t no more left,” pointing out that Indians still lived and worked in Chicago.

In the 1990s, Tribune editors decided to end the annual tradition. Douglas Kneeland, the Tribune’s public editor at the time, said, “‘Injun Summer’ is out of joint with its times. It is literally a museum piece, a relic of another age. The farther we get from 1907, the less meaning it has for the current generation.”

Still, the cartoon has a powerful hold over many Chicagoans. For generations of readers, “Injun Summer,” despite its flaws, became synonymous with the magic and peacefulness of those last warm days of the season. 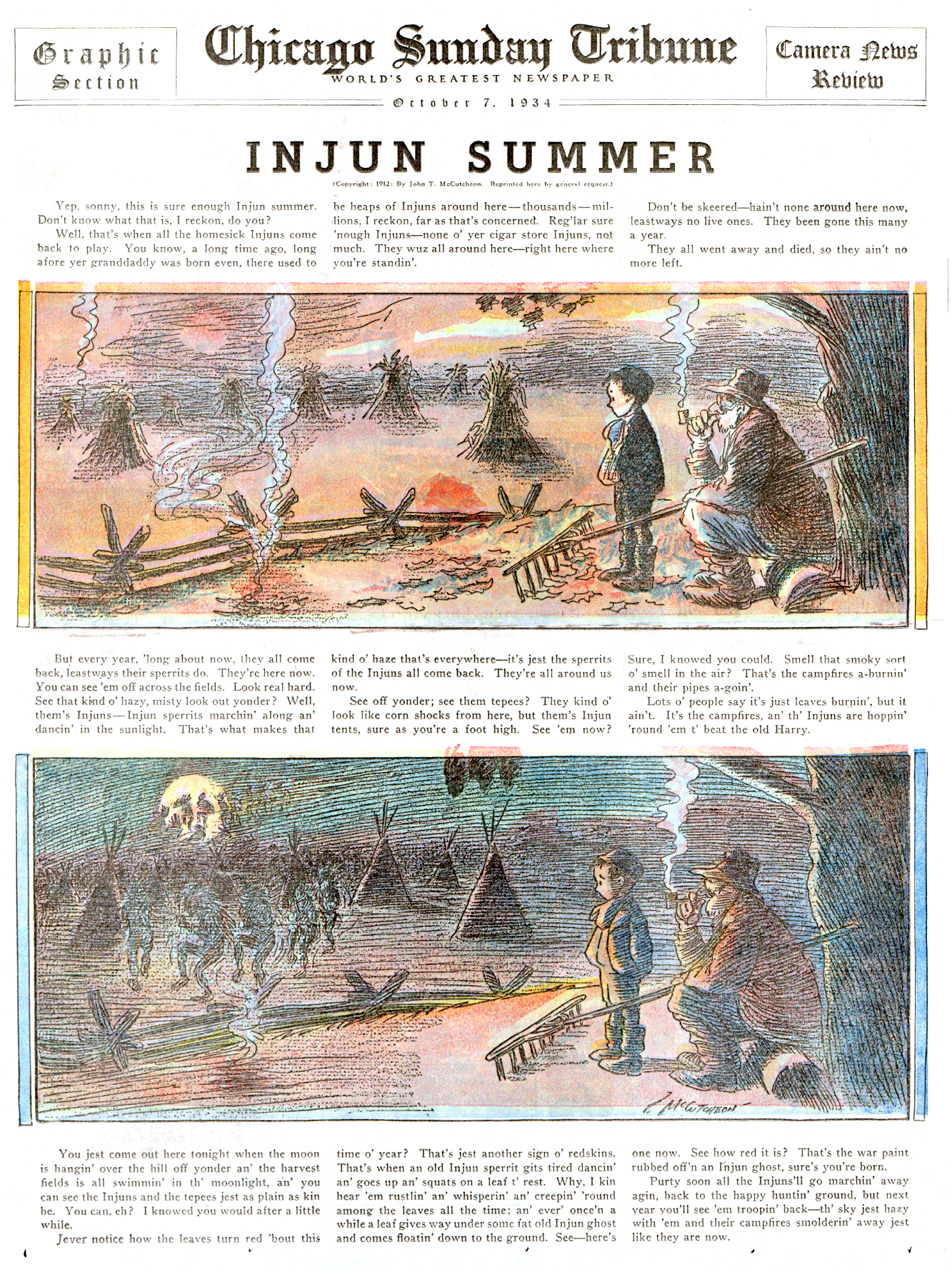 Yep, sonny this is sure enough Injun summer. Don’t know what that is, I reckon, do you? Well, that’s when all the homesick Injuns come back to play; You know, a long time ago, long afore yer granddaddy was born even, there used to be heaps of Injuns around here—thousands—millions, I reckon, far as that’s concerned. Reg’lar sure ‘nough Injuns—none o’ yer cigar store Injuns, not much. They wuz all around here—right here where you’re standin’.

Don’t be skeered—hain’t none around here now, leastways no live ones. They been gone this many a year.

They all went away and died, so they ain’t no more left.

But every year, ‘long about now, they all come back, leastways their sperrits do. They’re here now. You can see ’em off across the fields. Look real hard. See that kind o’ hazy misty look out yonder? Well, them’s Injuns—Injun sperrits marchin’ along an’ dancin’ in the sunlight. That’s what makes that kind o’ haze that’s everywhere—it’s jest the sperrits of the Injuns all come back. They’re all around us now.

See off yonder; see them tepees? They kind o’ look like corn shocks from here, but them’s Injun tents, sure as you’re a foot high. See ’em now? Sure, I knowed you could. Smell that smoky sort o’ smell in the air? That’s the campfires a-burnin’ and their pipes a-goin’.

You jest come out here tonight when the moon is hangin’ over the hill off yonder an’ the harvest fields is all swimmin’ in the moonlight, an’ you can see the Injuns and the tepees jest as plain as kin be. You can, eh? I knowed you would after a little while.

Jever notice how the leaves turn red ’bout this time o’ year? That’s jest another sign o’ redskins. That’s when an old Injun sperrit gits tired dancin’ an’ goes up an’ squats on a leaf t’rest. Why I kin hear ’em rustlin’ an’ whisper in’ an’ creepin’ ’round among the leaves all the time; an’ ever’ once’n a while a leaf gives way under some fat old Injun ghost and comes floatin’ down to the ground. See—here’s one now. See how red it is? That’s the war paint rubbed off’n an Injun ghost, sure’s you’re born.

Purty soon all the Injuns’ll go marchin’ away agin, back to the happy huntin’ ground, but next year you’ll see ’em troopin’ back—th’ sky jest hazy with ’em and their campfires smolderin’ away jest like they are now. 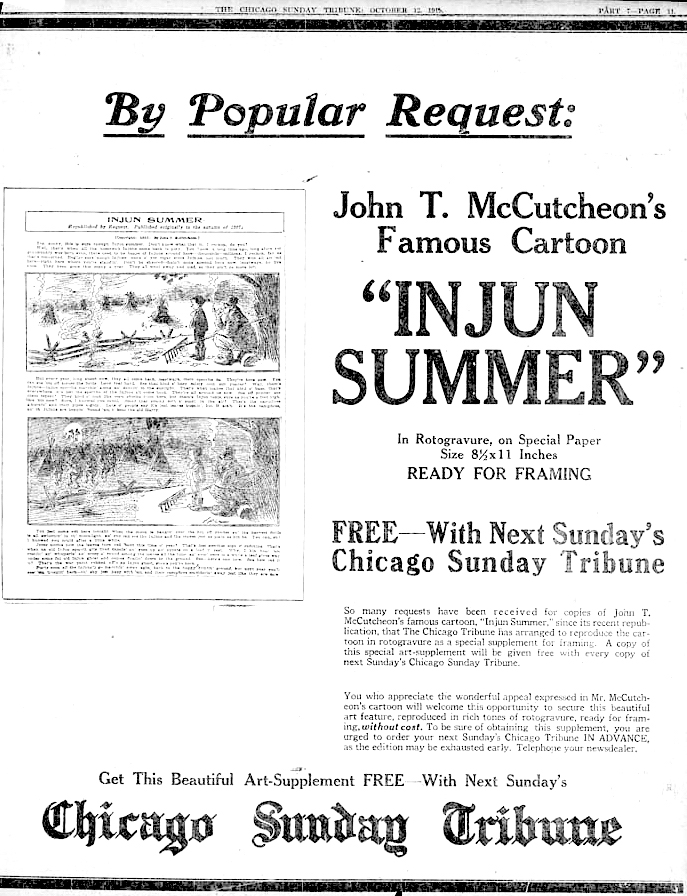 A Chicago Tribune advertisement announcing that the following Sunday, back by popular request, The Tribune will be running John T. McCutcheon’s famous cartoon “Injun Summer” in rotogravure and on special paper ready for framing. Included is a smaller picture of the original cartoon.