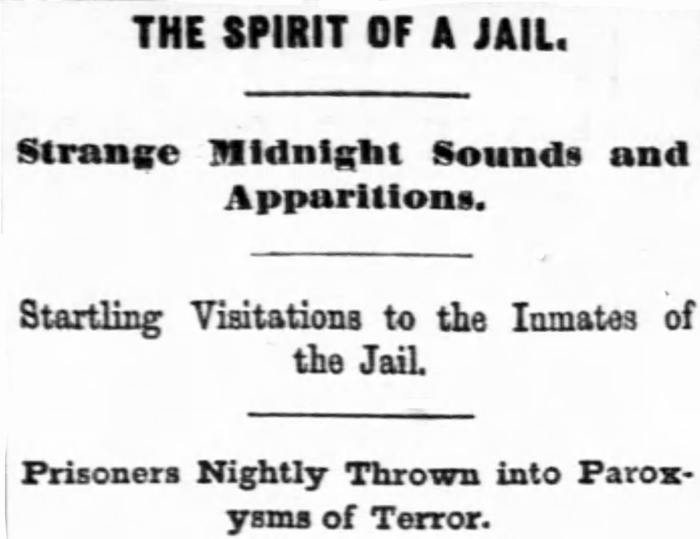 One night about six weeks ago, Deputy Sheriff Edward Langely was sitting at his watch in the office at the county jail. The prisoners had all been locked up in their cells long before, and most of them were fast asleep. The gas in the different wards was dim and indistinct. It was past 11 o’clock. The jail was hushed in stillness, save from one or two of the cells the noise of conversation was heard from those of the prisoners who had not yet gone to rest. The silence was oppressive, and rendered more so by the dull, heavy ticking of the clock which hung over the office desk. Now and then a rat, startled, scampered hastily across the floor. Suddenly there was a sound, of all sounds most unearthly and awful, that swept through the prison from one end to the other. Langley started and listened. All was still again. He listened long, but heard nothing, But he had not been mistaken—the sound had been too fearfully distinct for that. So he arose and went through the several wards to see whence the voice had proceeded. There was nothing, absolutely nothing. The gas still burned low and steadily. There was the sound of water dripping in the bath room, and of rats running helter skelter over the floor. That was all. The prisoners who were still up had ceased talking. They must be listening too. Langley inquired from them, and learned that they had heard the same strange noise. They were even more startled than he, and uneasiness was visible on the face of more than one. It was found that the sound had aroused the prisoners who had fallen asleep, nearly every one of whom was now awake and listening. Not a few of them were evidently frightened. Every one was listening with a painful, anxious interest. The same sound repeated itself soon after, and even more unearthly and distinctly. Anon it died away in a long, prolonged wailing that seemed pitiful to hear. So it continued until after midnight, repeating itself at irregular intervals.

Langley kept what he had heard to himself, for he was fearful that he might be laughed at for his trouble.

Two nights after he heard the sound again. He was sitting with Deputy Sheriff Merrill in the office when both were startled by a repetition of the same moaning, mysterious noise. The ward leading from the office terminates at the door of a vault, which is used as a water closet. The noise seemed to issue from this vault, and appeared to the listeners to proceed from a human being suffering from the direst agony. Langley believed that some one was in the vault,and he unlocked the door. As he did so the sound was heard, directly beneath the floor on which he was standing. Both he and Merrill paused, and that instant he heard in a tone which he says he will never forget, the words, “Oh, dear,” thrice repeated. Langley applied his ear to the floor, and immediately the sound was heard, louder and more frightful than ever from the eastern extremity of the jail. Langley and Merrill returned to the office and pondered, but with less and less satisfaction, upon what they had heard. The sound was repeated as before, at irregular intervals, during the first half of the night.

About a week after this Deputy Sheriff Tuttle and Simpson were on watch at the jail, when, about 10 o’clock, they both heard a repetition of the mysterious sound. It seemed to issue from the western end of the jail. Tuttle seized a light and traced the sound, as he supposed, to cell No. 18. He stationed himself at the door and was quietly listening, believing that one of the inmates of the cell had caused the sounds, when, as he stood, he heard the mournful wail directly under his feet, and so near to himthat he received a shock which he felt for many days after.

Since then the ghost, or spirit, to which the origin of the sounds was ascribed, has been the leading topic of discussion among the prisoners and other inmates of the building. Among the former the superstition is prevalent that the ghost of Fleming, who was hung nearly two years since, with Corbett, for the murder of Mahoney, haunts uneasily the place where he suffered the penalty of his awful crime. The effect on the various prisoners confirmed in the jail is very great. Very many of them are remarkably ignorant, and as a consequence are superstitious to the last degree. They all believe in the genuineness of the “ghost,” and make no concealment of the uneasiness which they feel regarding the mystery. Some of them assert that they have actually seen the spirit. One of them, a colored man named William Jones, says he awoke one night in his cell and saw the figure of a man hanging with a strap around his neck to the grating which opens into the ventilator from the ceiling. He says that the fright overcame him to such an extent that he fainted. Within the past few weeks the Deputy Sheriffs who have been on watch have on several nights been called to the cells of prisoners whom they found in paroxysms of fear and horror, asserting that the Presence had appeared to them.

George Hughes and George Phillips, who have occupied cell No. 28 for the last four weeks stated that every night since their confinement except two, they have heard the noises spoken of, though they have seen nothing. They describe the noises as something awful., They seemed to be the crics of some being in the most dreadful distress. At one timne they seemed to be directly opposite their cell, at another a long distance off, rising and falling alternately, awfully distinct at one time at another barely audible.

Joseph Sheldon, Charles Selinger, Powell Steinbeck and Henry Schoelle, have been confined in cell No. 32 for the last two weeks. Sheldon tells the following, which was attested to by his companions:

A week ago last Monday night, they all lay down to rest in the bunk at the back of the cell, and soon soon after they fell asleep. After sleeping they cannot tell how long, the presence of an indefinable something in the cell caused them all simultaneously to start from their sleep. Each felt a painful sense of oppression that was as mysterious to them as it was horrible. Neither was conscious of anything definite, and yet they were all aware aware of the proximity of a something which made them tremble with horror, and caused the perspiration to roll each of them like rain. As they sat up in bed, each too much frightened to utter a word, they felt a cold, rushing wind swept through the cell, chilling each to his very bones. at the same instant the cell door (the inner door, which is enclosed in a heavy outer door of wood), shook and rattled, seemed to swing violently open and then shut again. Then all was still. The four men set bolt upright, listening for several moments. But they heard no more. They lay down, wondering at the vague cause of their alarm, which they connected with the “ghost,” of which they had heard from their fellow prisoners. Every night since they have heard the peculiar moaning sound which has been noticed by every inmate of the jail.

Richard Rainforth, the life insurance conspirator, who has been confined in the jail for several months for contempt of court, stated that for the past six weeks heard strange noises in the wards outside of his cell. The noises were heard by him between 10 o’clock and 2 o’clock at night. They were peculiar noises, a king of moaning. The sounds were so pitiful and so strange that he did not believe them to be human. At one time he heard the wall close to his cell; at another the sounds seemed to be fully two miles away; now it was loud enough to be heard through the entire prison, and now it fell suddenly into a low morning, which gradually died away only to be resumed after a short interval.

Last night the writer, in company with several prominent gentlemen of this city, repaired to the jail to await the recurrence of the mysterious sound. After waiting patiently, at 13 minutes of 10 o’clock, the ear heard a sound which seemed to proceed from the western end of the jail. Those who heard it hastened out into the ward, where for two hours they heard the sound repeated now faintly and again distinctly, now close at hand, overhead, underneath, seemingly from within the walls on either side, and again from the far off distance. At midnight the sound died away and was heard no more. It was a peculiar kind of moaning, like that described in the statements of the prisoners given above. One thing was certain; the sounds heard were of no human being. The y mnay be produced by the wind, ringing the changes of an Æolian harp in some portion of the building, but they are different, from those ever produced by a ventriloquist.

Supervisor Dolton, of the Committee on the Judiciary, to whom was referred the report inquiring whether the ghost now said to be haunting the Court House, is a county ghost or not, reported that they had taken the matter under advisement and come to the conclusion that it was not a county ghost, and that the Sheriff should be authorized to eject it.

The report on this important matter was referred back to the committee for further consideration.

Last evening there was a large attendance at the Court House. A majority of the visitors desired to see or hear “the Court House ghost.” An inveterate joker sold many of those who came within the precincts of the establishment by furnishing them with tickets of admission, which were of course “bogus.” Some of these tickets stated upon their face that they are good for this evening. It is but fair to inform the recipients that there is an outer door to the jail, and even a loud nock upon it can hardly be heard within the bailiwick of the “spook.” The jailer does not acknowledge any such passes.

RETURN OF THE COURT HOUSE GHOST

Between one and two months ago the celebrated Court House ghost disappeared and there was an end to the moan and groans that had been sounding through the jail. Why it went no one knew. Some mourned over its departure, while others rejoiced. It appears now, however, that its departure was not a permanent one. On Saturday night it took up its old quarters in the jail and made as of old all sorts of unpleasant noises. During Sunday and Monday nights the ghost made more noise even than usual. Tuesday night the sounds were more subdued than on the two previous nights.

Hahn, one of the prisoners at the jail, states that he saw the ghost Monday night. It came to his cell and looked through the hole. The ghost’s head was covered with a black hood, while the remainder of its raiment was of a spotless white. Hahn had no conversation with the ghost, and it soon left.

While some may regret the return of the ghost, it is probably for the best that it should be here. It is well to have a standing ghost which we can show to friends from other cities. It will be another evidence of the enterprise of Chicago.