BODY OF NISSEN FOUND ON SHORE.

Rash Attempt to Roll Across Lake in “Foolkiller No. 3” Ends in Death 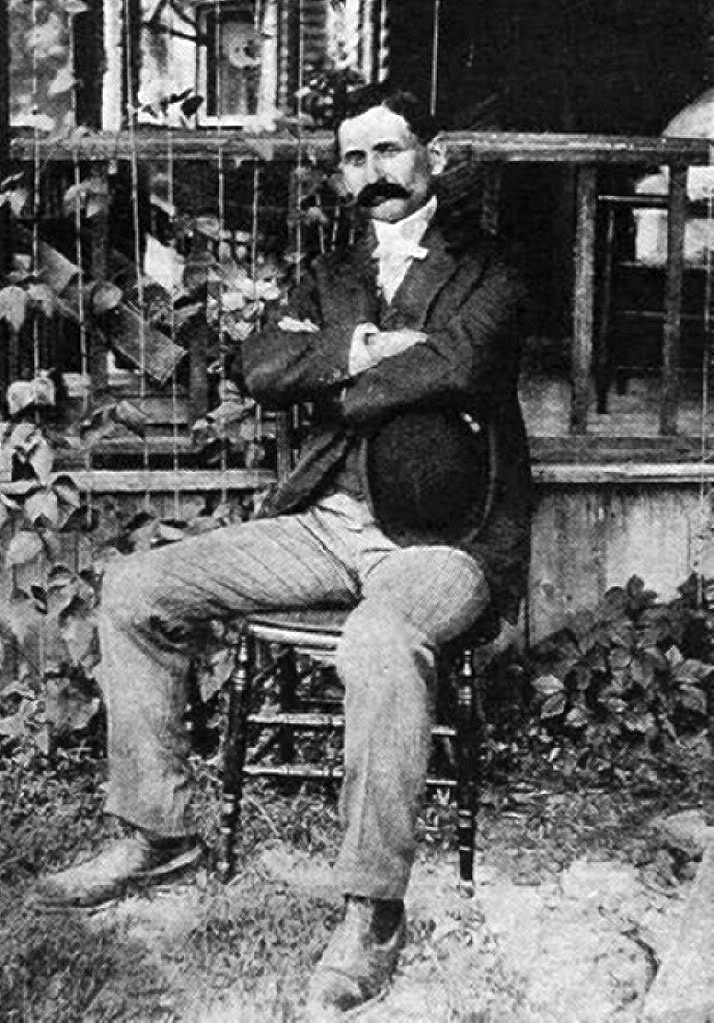 Peter Nissen and his “Foolkiller” are no more. The dead body of the eccentric navigator was found yesterday on the lake shore near Stevensville, Mich., seven miles south of St. Joseph. A few rods away was the battered and wrecked “windbag” in which he had attempted to cross Lake Michigan.

From all indications Nissen had remained in his aquatic balloon until the last. Perhaps he perished in a final frantic effort to escape, as his craft was dashed upon the beach by the high surf late Wednesday afternoon. Death, according to physicians, was due to exhaustion and exposure.

A note found in his pocket of his coat threw the only light upon the last moments of the navigator. It indicated that Nissen had experienced difficulties in obtaining an air supply. The note ran:

In the chair. Cannot use hose.

By “hose” Nissen referred to the pipe and valve in the end of the “wind bag” through which he breathed. It was found to be broken useless.

May Have Perished on Shore.
Those who first examined Nissen’s body and the “Foolkiller” believe the inventor accomplished his prime object—crossing the lake in his device. He died, these persons assert, after touching the Michigan shore. This belief is strengthened by the statement the “Foolkiller” was seen 200 rods from shore off Livingston, Mich., six miles south of Stevensville, at 4 p.m. on Wednesday. A heavy gale was blowing and it is presumed he was unable to to land and was swept northward.

Nissen’s body was found by Mrs. Sophia Kohler, wife of a German farmer living near the lake shore. Looking out of the window at 11 o’clock yesterday forenoon, Mrs. Kohler saw on the beach below the form of a man. Less than 200 feet away was a huge, shapeless object, looking like a giant football.

Neighbors were called, and an investigation begun. It required only a few minutes to identify the body as that of Nissen. Dr. John S. Beers of Stevensville made an examination and declared the man had not been drowned.

Watch Stopped at 6:45.
With the exception of one or two slight bruises on the face no marks of violence were found. The bruises were believed to have been due to the buffeting of the body on the beach after death. On examination of Nissen’s effects it was found that his watch had stopped at 6:45. Besides the farewell note in his pocket the other articles in his clothes consisted of a compass, a bunch of keys, three handkerchiefs, and a bow necktie.

In the bottom of the balloon boat was found a wooden locker, used as provision hamper. It contained a quantity of candied raisins and a package of crackers. His food supply was still dry and in perfect condition.

Further examination of the “windbag” showed the air “hose” had been torn in two about twelve inches from the outer canvas, probably by the constant lurching of the craft. It was this air valve which had given Nissen the greatest concern when he embarked from the foot of Chicago avenue on Tuesday afternoon. Several times before he started Nissen had tested the valve, and had pronounced it in perfect working order.

Condition of the “Foolkiller.”
The steel shaft, three inches in diameter, which extended nearly the length of the bag was intact as were the various ropes buckled to the inner surface of the balloon and fastened to the axle. Nothing but the canvas bag itself was damaged, and it had been badly rent and torn by the waves.

The voyager’s body was removed to the Stevensville city hall, where a coroner’s jury was impaneled and an inquest begun, but continued until 10 o’clock this morning.

Six hours after the finding of the body two nephews of Nissen, W. H. and H. M. Gantzel, who, since daybreak had been scanning the lake in the tugboat Protection arrived at Stevensville. The searching party had learned the fate of the navigator earlier in the afternoon at Michigan City, Ind. They immediately took charge of the body and notified the Chicago relatives of the dead inventor. The remains probably will be brought home today.

“I believe Peter accomplished his purpose,” said his brother, Nis Nissen. “From what I learn, he reached the other side of the lake, but was so exhausted he had not the strength enough left to drag himself ashore. I fully believe that he was conscious before he died that he had won out.”

Tells How Plan Originated.
The story of Nissen’s first attempt to introduce his “Foolkiller” to the public was told by and official of the Michigan Central railroad.

Ten years ago I received a letter from Nissen, in which he said he had a scheme whereby my road could make an enormous amount of money. My representatives found Nissen in charge of a little bookkeeping school on the west side, and after some urging he revealed his scheme.

It was to construct a vessel which would carry him in safely over the Niagara Falls. He was asked how the roads could make any money out of it and said he had found a woman who believed him and was willing to make the trip with him. He proposed that they be married just before embarking and that the railroad advertise the event largely and reap a huge profit from excursions. He was to have a percentage. The plan was rejected.

From that idea Nissen started the boat which did carry him through the rapids several years after. He did not realize his ambitions, however, on this trip and ever since has been working on some great scheme which would make him rich.

He talked to me of the balloon, the “Foolkiller,” several times and it was his intention next summer to go across the lake in advance of the excursion boats, on certain well advertised days, thus drawing great crowds to watch him, and reaping a harvest of profits.

NISSEN AND HIS “FOOL-KILLER NO. 3”

It may take time and the efforts of others to demonstrate whether or not Peter Nissen has left anything of scientific value in the ideas he entertained of traveling over land or water in a balloon-shaped apparatus such as that in which he lost his life in an attempt to cross Lake Michigan on Tuesday, November 29 last. Despite his failure to survive the journey, it is evident that an apparatus such as he designed will roll with the wind over land, water, or ice, but it is too early in the history of the device to determine in what field it might prove serviceable or useful. Man has already devised and constructed so many things in which one may travel, that this infant of Nissen’s has not yet found its place. 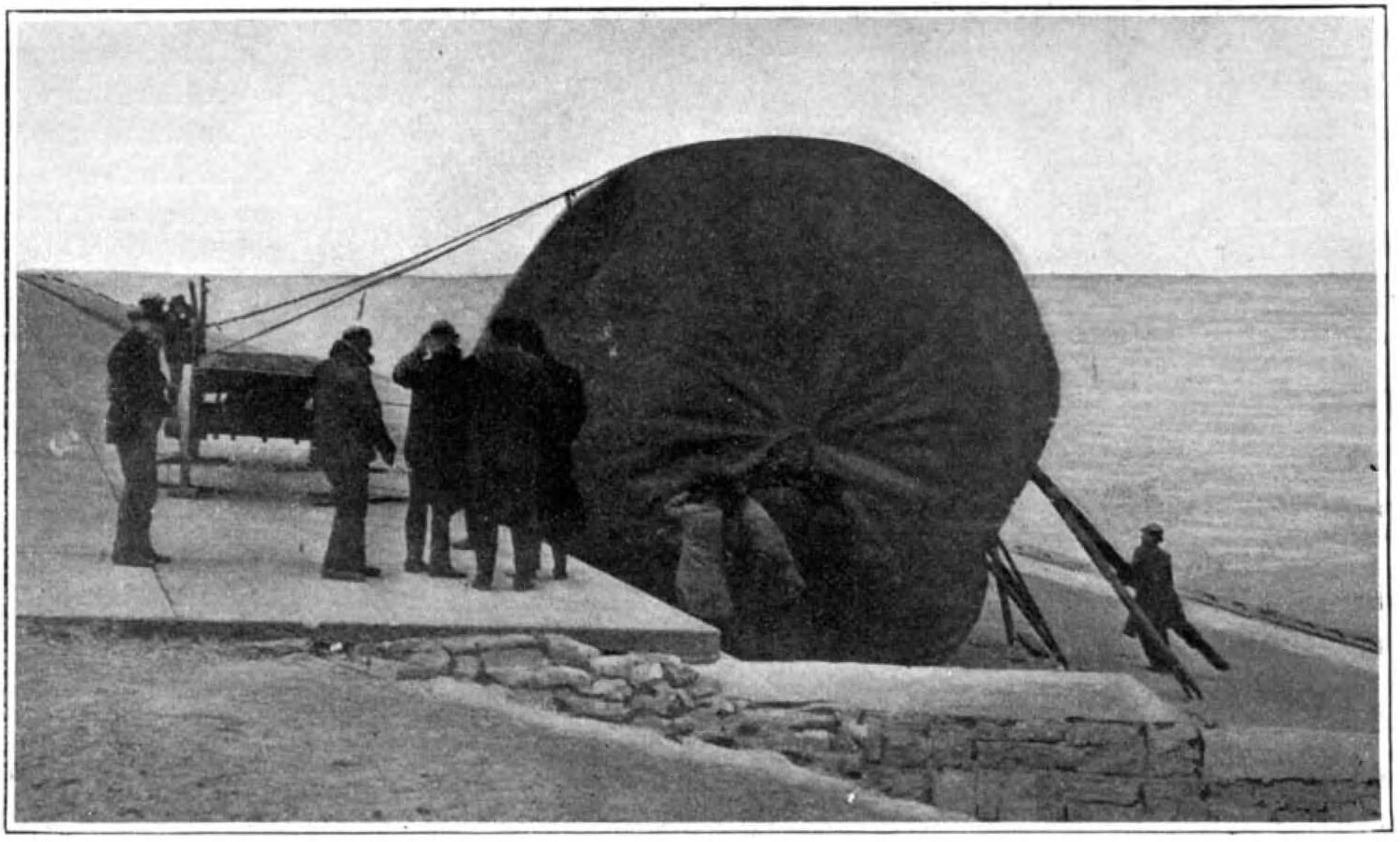 Rolling the ” Fool-Killer ” Into the Lake,

Considering that this adventure of Nissen’s was the first of the kind man has ventured to make, it is to be regretted that he lost his life in the feat. It is reasonable to believe that he made the trip across Lake Michigan successfully, and that had aid been rendered him promptly on the Michigan shore, he would have lived to relate his experience. Even had the feat been performed at a season of the year when the weather conditions were more favorable for exposure, or more boats traveling up and down the lake, Nissen would in all likelihood be alive to-day. Recalling the stories told of sea serpents, it must be left to the imagination to conceive the story that a lake captain might have told had he been a witness of Nissen’s strange craft rolling across the bow of his boat.

Peter Nissen believed his balloon-like apparatus had a value in connection with North Pole explorations. His first experiment with a rolling balloon pleased him. This first balloon was five feet long and three feet high. It had a shaft through its center, and on this he placed a car spring. He used a car spring because it was handy and convenient, and he felt it would slide from end to end, much the same as a man might move about. His experiments delighted him, and he decided to build the larger balloon, in the operation of which he lost his life.

This balloon was made of heavy canvas, and when inflated was 38 feet long a and 22 feet in diameter. It had a porthole at each end, and through the center was a shaft about 12 feet long and 3 inches in diameter. This shaft was suspended from cords fastened around the inside, on exactly the same principle as the spokes in a wheel. On the shaft he arranged a sliding seat, so that he could move toward the ends, hoping in this way to steer the big ball by throwing one end up in the wind to cause it to swerve as he desired, as the high end would offer more surface to the wind. Suspended from the shaft and below the seat was a cradle or a boat, where he contemplated resting when fatigued from riding on the seat. A two-inch hose was run through one end of the balloon to furni sh an air supply, a pump of his own invention being on the inside. “Fool-Killer No. 3” is the name he selected, he having previously built two boats for navigating the whirlpool rapids of Niagara, the first having been named “Fool-Killer No. 1,” which was rebuilt and renamed “Fool-Killer No. 2.” This latter boat was deserted and lost in the Niagara whirlpool on the evening of Thursday, October 17, 1901, after Nissen and a companion had floated helplessly about those rough waters for seven hours.

The “Fool-Killer” Starting on Its Fateful Journey Across Lake Michigan.

It was 3:10 P. M. November 29 when Nissen called from the inside of his balloon to set her free. Thirty-five minutes later the balloon had passed from sight of those at the foot of Ohio Street, Chicago, from which point the start was made. Late in the morning of the Thursday following Mrs. Sophie Koehler, the wife of a farmer living near Stevensville, Mich., found Nissen’s body on the lake shore, and 200 feet away was “Fool-Killer No. 3,” torn and wrecked. The coroner’s jury decided that Nissen died from exposure, the supposition being that he had made an effort to reach shore, but was too much exhausted. He left no message, all reports to the contrary notwithstanding. As to his experience on the trip and when he died, there is nothing certain; but as the air hose was broken, it aroused suspicion that his supply of fresh air was cut off at some point on the journey across Lake Michigan to eternity.

The lost Chicago submarine “Foolkiller” was found yesterday. William M. Deneau, known as “Frenchy,” a diver, found the subsea boat near the Rush street bridge. It was buried under three feet of river bottom muck. The boat os said to have belonged to Peter Nissen, spectacular mariner, who was lost in his revolving vessel while attempting to drift across Lake Michigan.

Deneau was laying cable on the river bottom. A chance sweep of a shovel from the dredge above exposed the side of the submarine.

The “Foolkiller” was a so called because t first made its appearance shortly after the Chicago fire in the days when submarines were unheard of, and drowned its original owner, a New York man, when it made a trial trip. Nissen then bought it. 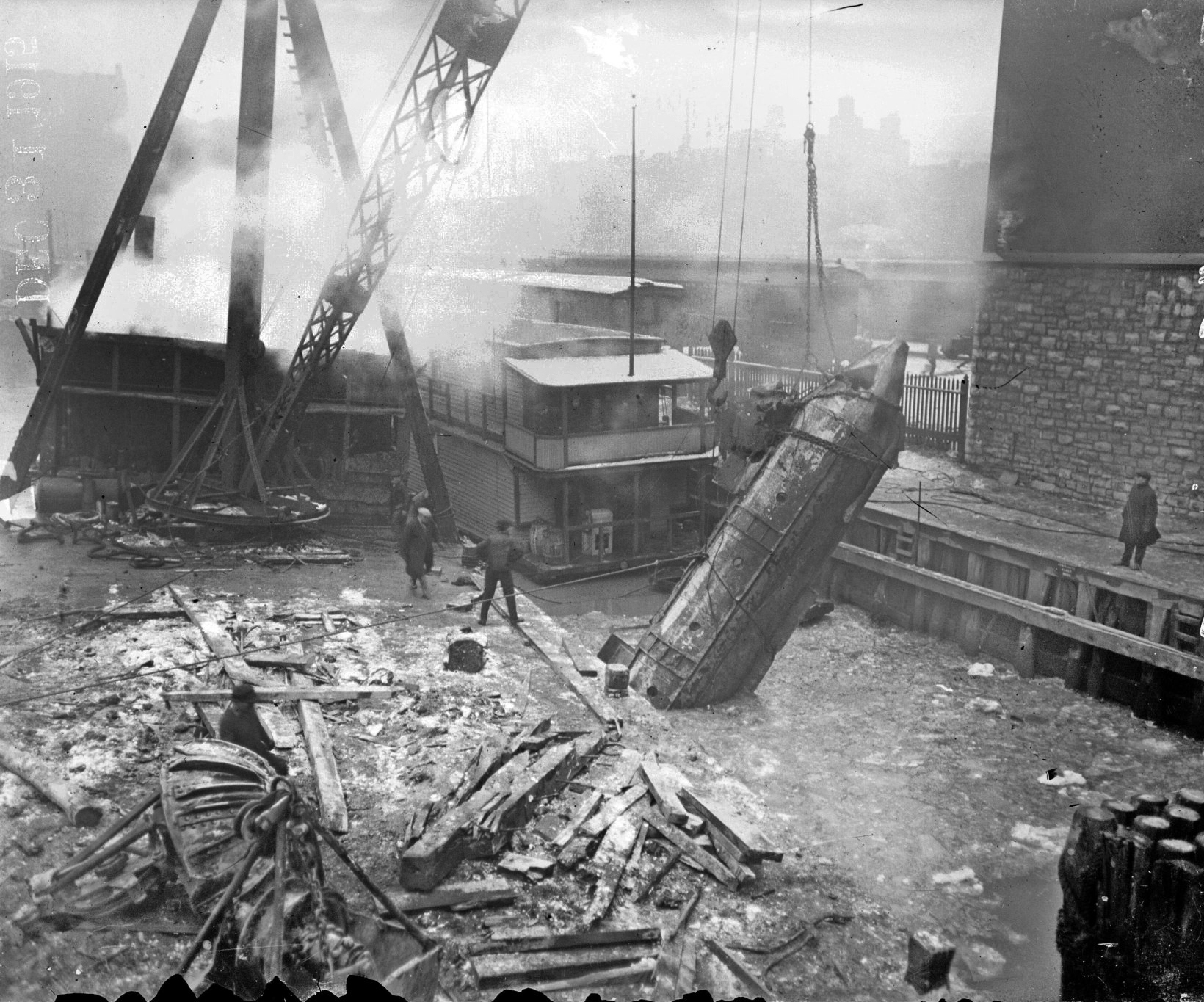 The raising of the Foolkiller in 1915. 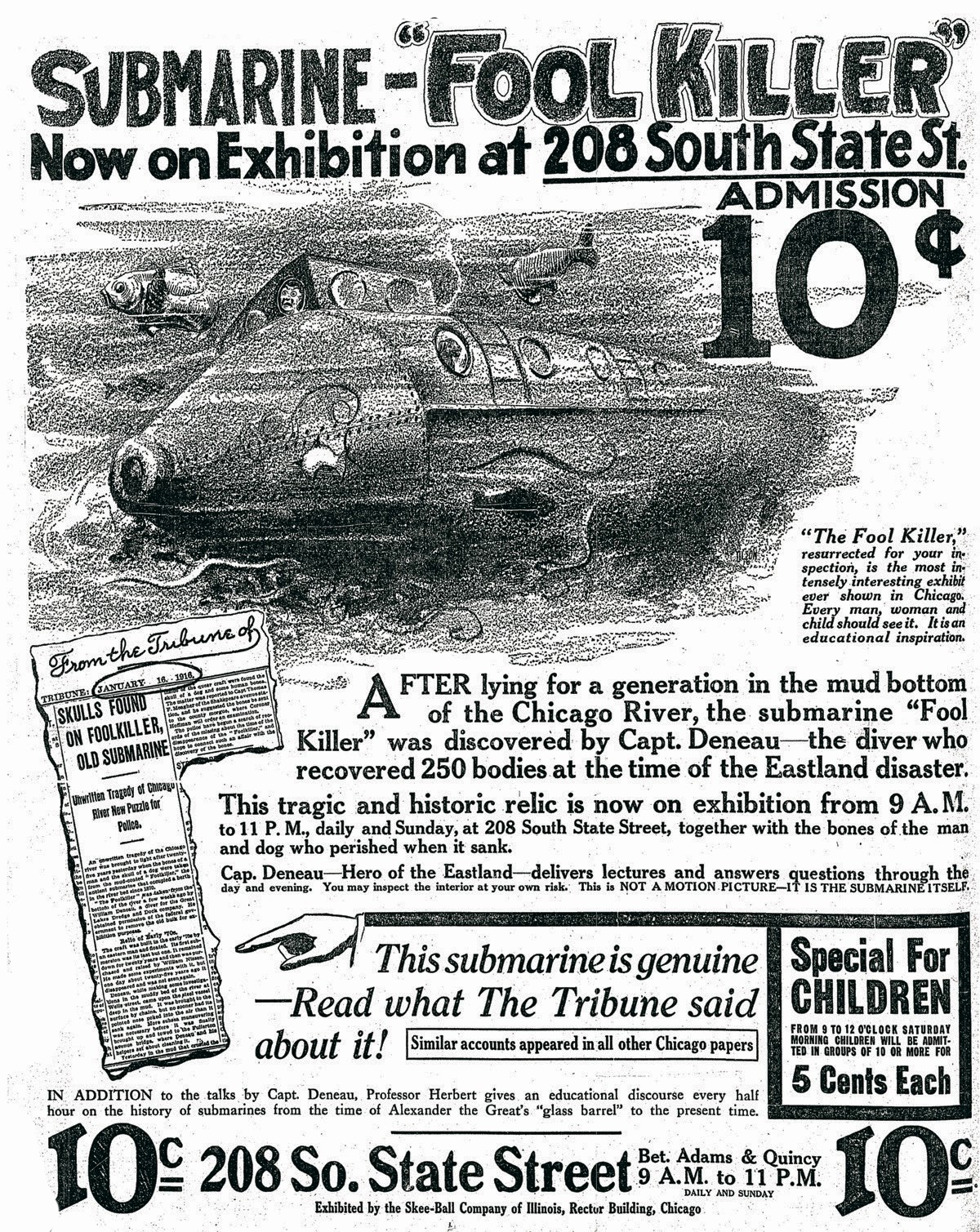