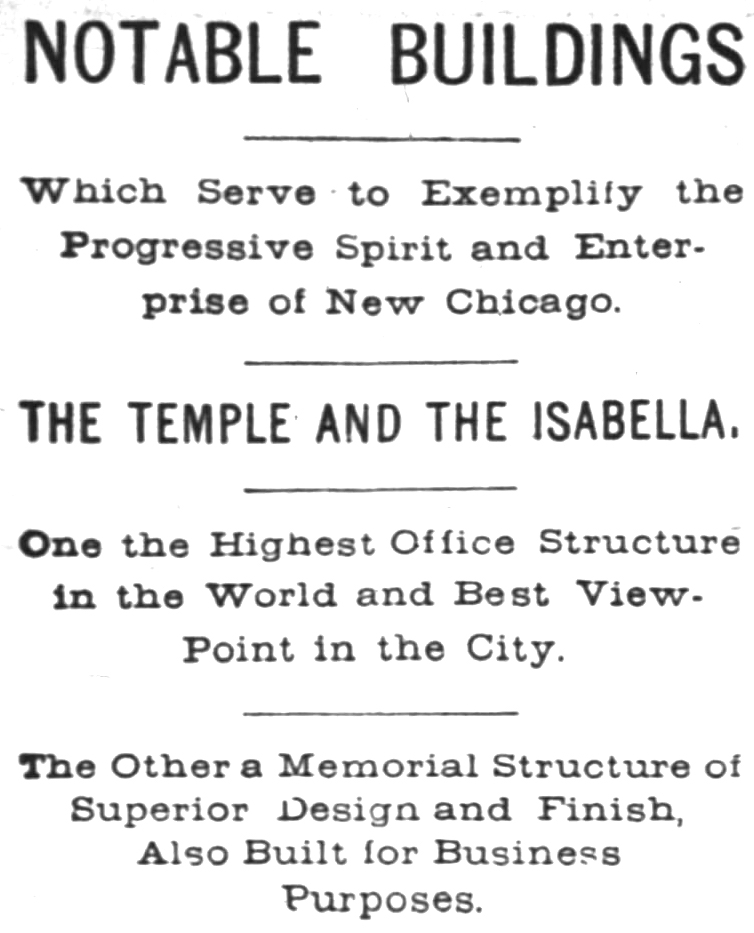 Isabella Building
In this memorable Columbian year Chicago has done much to fitly celebrate the four hundredth anniversary of a great event. She has organized an international exposition which has made her famous in all parts of Christendom, and she has brought trooping to her gates the people of a hundred climes with their offerings in the field of science, agriculture, literature, and art. To display these she has reared pile on pile of massive and spacious edifices which thrill the beholder with their architectural beauty, but which at the same time fill the mind with regret that they are so soon to pass away. Yet after all, when the multiplex material which unites to form their consummate beauty shall have been resolved into its original elements, there will still remain, as permanent reminders of this eventful point of time, a few important architectural monuments which her citizens have reared, and to which they have given names commemorative of this year of years.

One of these is the Isabell, named for the generous queen whose encouragement and bounty started the fateful Genoese on his Western quest. This graceful structure is situated on the south side of Van Buren street, between State and Wabash avenue, and was completed in May last. As will be seen by references to the map, it is moat convenient of access. It is reached by the State street and Cottage Grove avenue cable lines, by the Illinois Central railroad from the Van Buren street station, by the Rock Island and Lake Shore roads, by the Alley Elevated road, by the important West Side lines, and especially the roads using the proposed Van Buren street tunnel, by the North Side cable line from Monroe street, and it is also within easy walking distance of the principal hotels, railway stations, and down-town clubs. 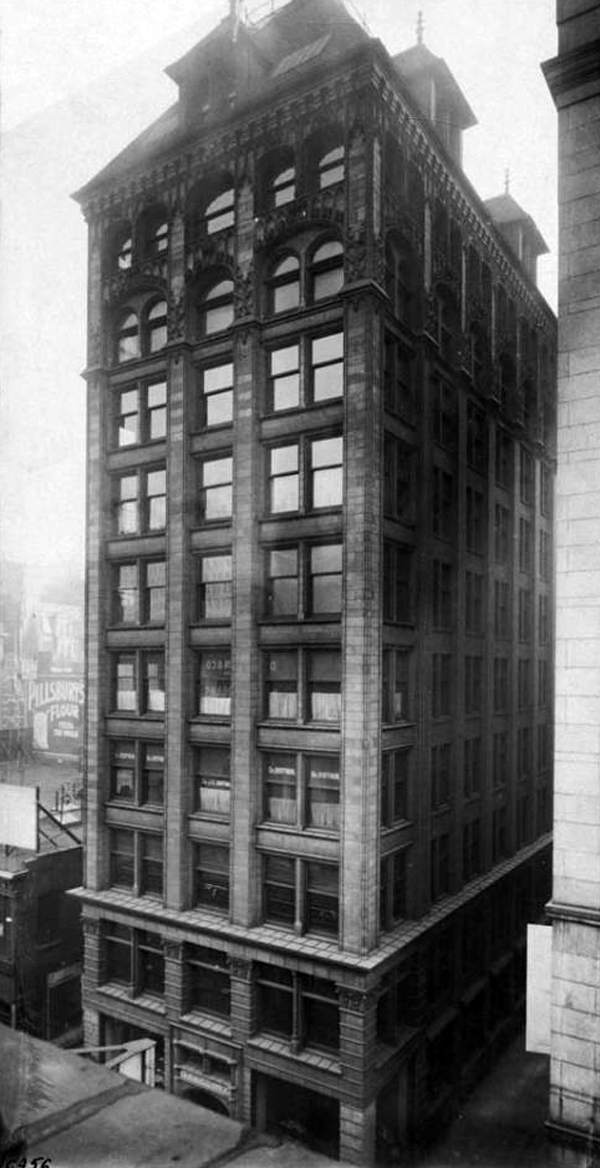 In addition to these advantages of location the construction of the building is of the most approved fire-proof order. The framework is of steel, the exterior is embellished with ornate iron work upon marble, with which all the hallways are finished. The first floor is of St. Sylvester, and the upper floors in Italian, wainscoted to the height of four feet, the remainder of the space to the ceiling being of mahogany and plate glass. All of the offices are finished in plaster and mahogany, the floors are of polished oak and the windows of plate glass. The lighting of the Isabella is also a feature worthy of consideration. Situated between two alleys on the east and west, fronting Van Buren street on the north, and receiving light from a vacant space upon the south end of the lot, the building will not have a dark room. For the purpose of artificial lighting it is supplied throughout with both gas and electricity. The structure is equipped with two hydraulic elevators of high speed, and calculated to furnish the best possible service. The hardware of the Isabella is of the finest and most expensive character. The first ten floors are of aluminum, and those above of statuary bronze, while the plumbing is of the most approved order, and hot and cold water will be furnished in every room where desired, while all the closets and retiring rooms are well lighted and ventilated. An inspection of the plans at the office of John Leiter, room 4, No. 81 South Clark street, shows at a glance that the arrangement of rooms is most convenient. In short the Isabella is constructed in the most thorough and expensive manner, as benefits a memorial structure and so as to be in accord with the tastes of the selected tenants who will be its continuous occupants. It is highly creditable to its projectors and to the city, and their enterprise b=has been amply rewarded in most advantageous leases. 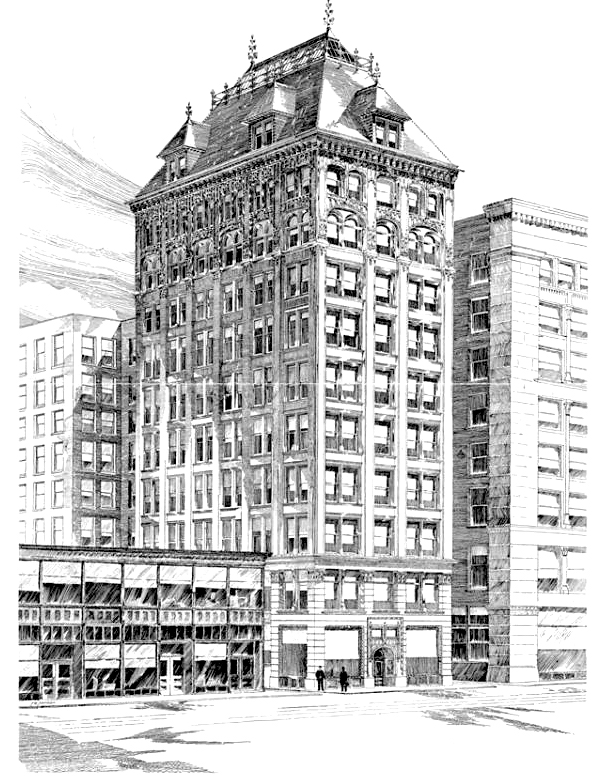 Architect’s drawing of Isabella building in 1892. 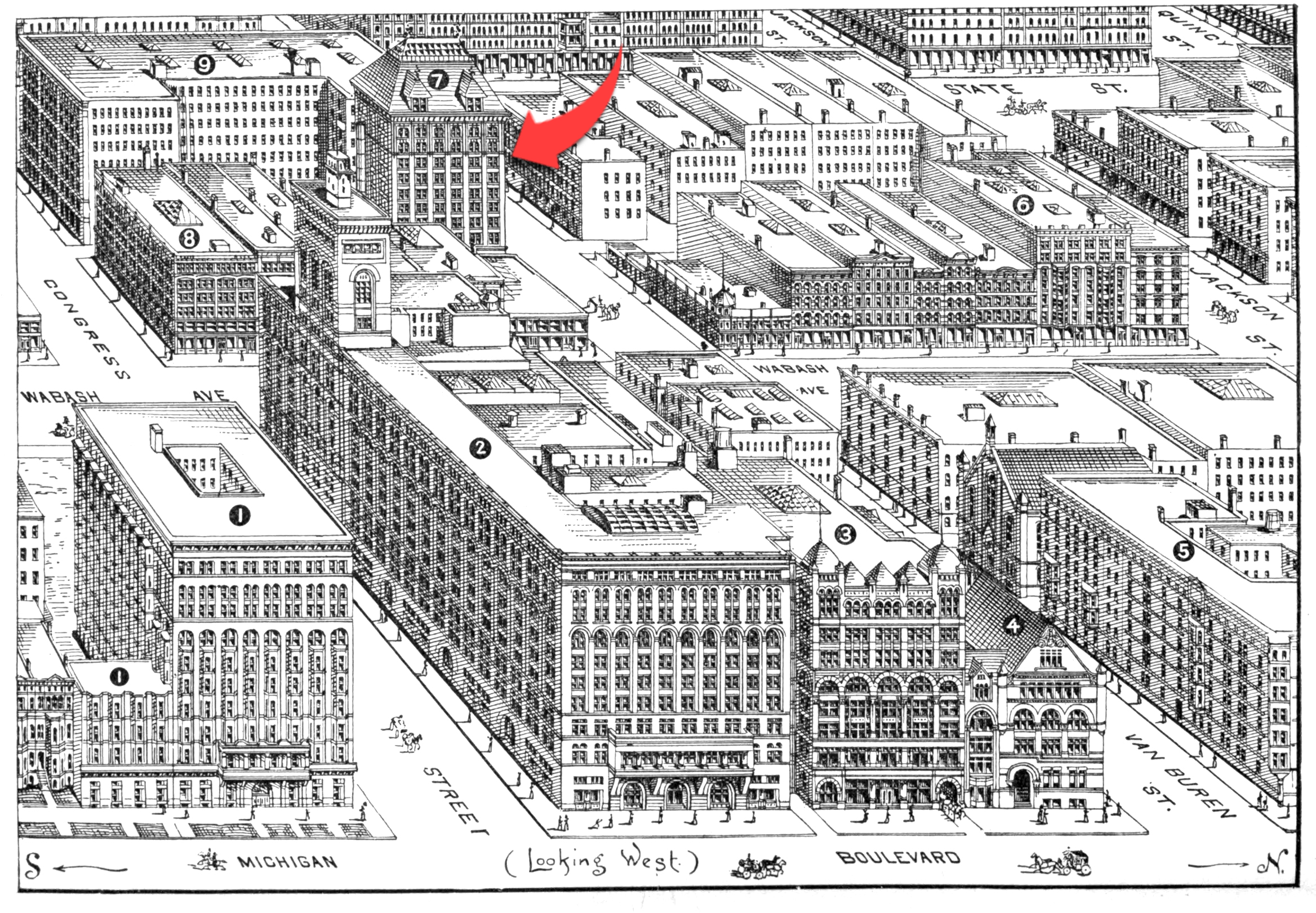 7. The Isabella Building,
At 44-48 Van Buren Street, is one of the very latest of the steel skyscrapers. It is 46 feet wide. 78 feet deep, and 165 feet high, with 11 stories and basement. Copper enters conspicuously into its exterior construction. There are 4 stores, 100 offices, and 2 passenger elevators. The Daughters of Isabella have their society halls on the upper floor. Erected in 1893, at a cost of $200,000. 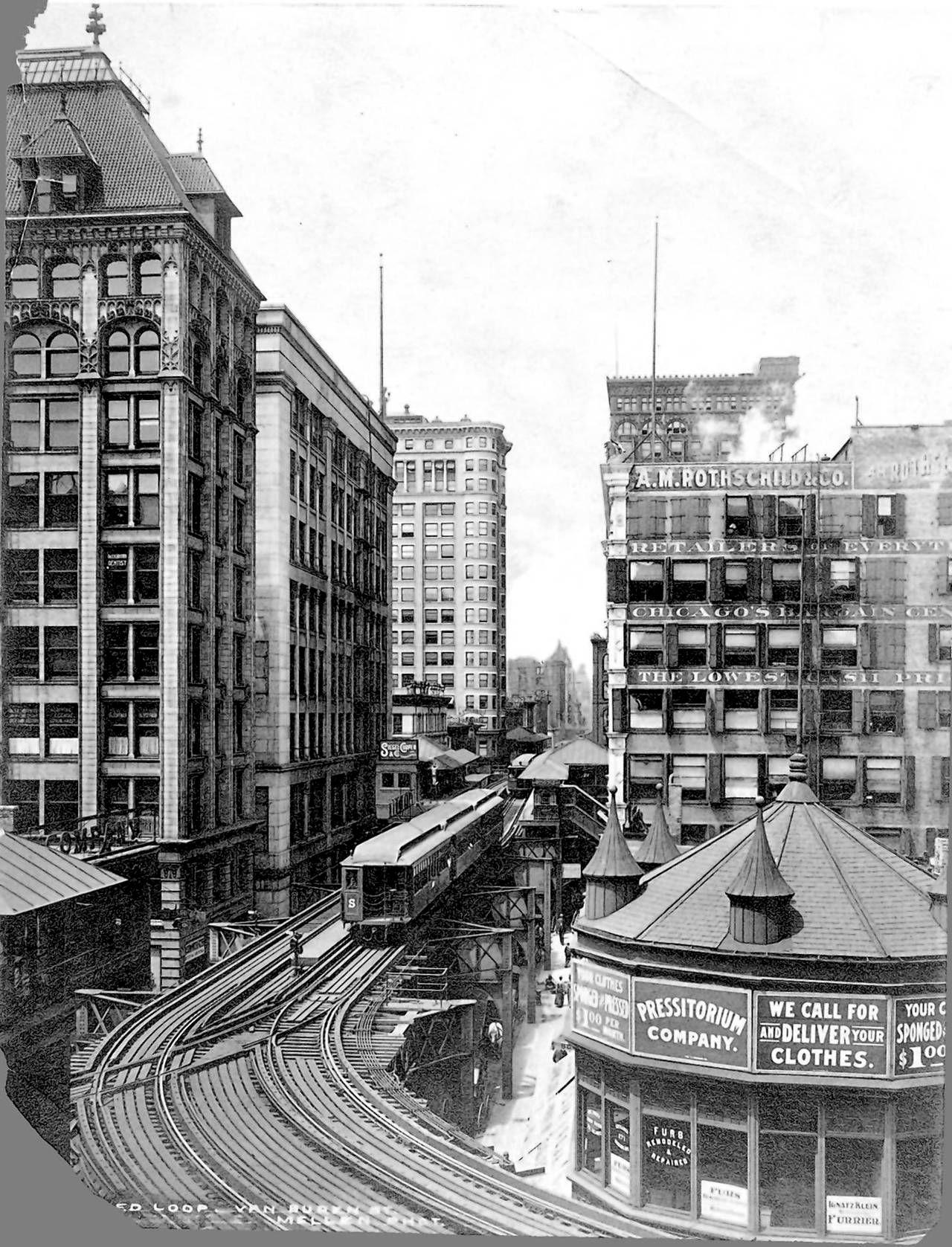 By Patricia Leeds and Meg O’Connor
The top five floors of an 11-story building at 21 E. Van Buren St. were evacuated Friday while firemen put out a fire in the upper floors.

Heavy smoke poured from the building, and elevated trains in Van Buren Street and around the Loop were slowed until trainmen could proceed safely. Street traffic was rerouted.

The building is owned by the Catholic Archdiocese and is connected on gthe bottom two floors to Old St. Mary’s Church at the southwest corner of Van Buren Street and Wabash Avenue. The church was not damaged.

Fire Marshal William Foley, who estimated the damage at $25,000, said the fire apparently started in the electrical vault on the sixth or seventh floor, burned thru a wooden door, and got into the main part of the building. 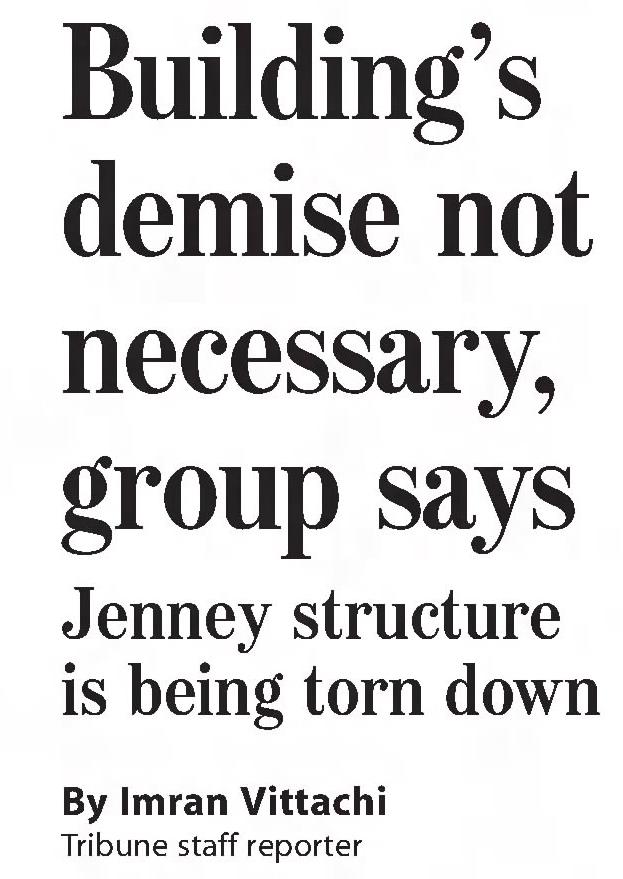 A fire destroyed its top five floors decades ago, leaving the Isabella Building, designed in the 1890’s by the “father of the skyscraper,” standing at six stories.

But a historical architecture preservation group is lamenting a decision by city planning officials and the Landmarks Commission to allow DePaul University, the current owner, to raze it to make way for new academic and administrative buildings.

Demolition of architect Le Baron Jenney’s building and a two-story structure next door is already under way, but activists from Preservation Chicago say the Isabella could have been and restored to a copy of its original 11 stories.

“There should have been more of an effort to save the building,” said Jonathan Fine, the group’s president. “The importance of William Le Baron Jenney cannot be stressed, This man invented the skyscraper.”

Spokesman for the city Department of Planning and Development said the building lost its architectural luster decades ago. He said it could not be salvaged and re-created to look like it did at the turn of the 20th century, when Jenney’s buildings were among the first made with steel frames that enabled skyward construction.

“Preservation Chicago is trying to save half a building,” said city spokesman Peter Scales. “The best parts of the building are gone.”

The Isabella had not satisfied the architectural criteria of a recent citywide survey if buildings with potential to be landmarks, and the Landmarks Commission ruled that the building had little or no historical or architectural worth.

The Isabella’s destruction won’t erase Jenney’s imprint on Chicago architecture because some of his buildings still exist in the city and have become designated landmarks, Scales said.

DePaul plans to turn the site into a parking lot before beginning work on the new complex, said university spokeswoman Robin Florzak. Before 2001, when the university bought the property from the Roman Catholic Archdiocese of Chicago, it housed Old St, Mary’s, now located at 1500 S. Michigan. 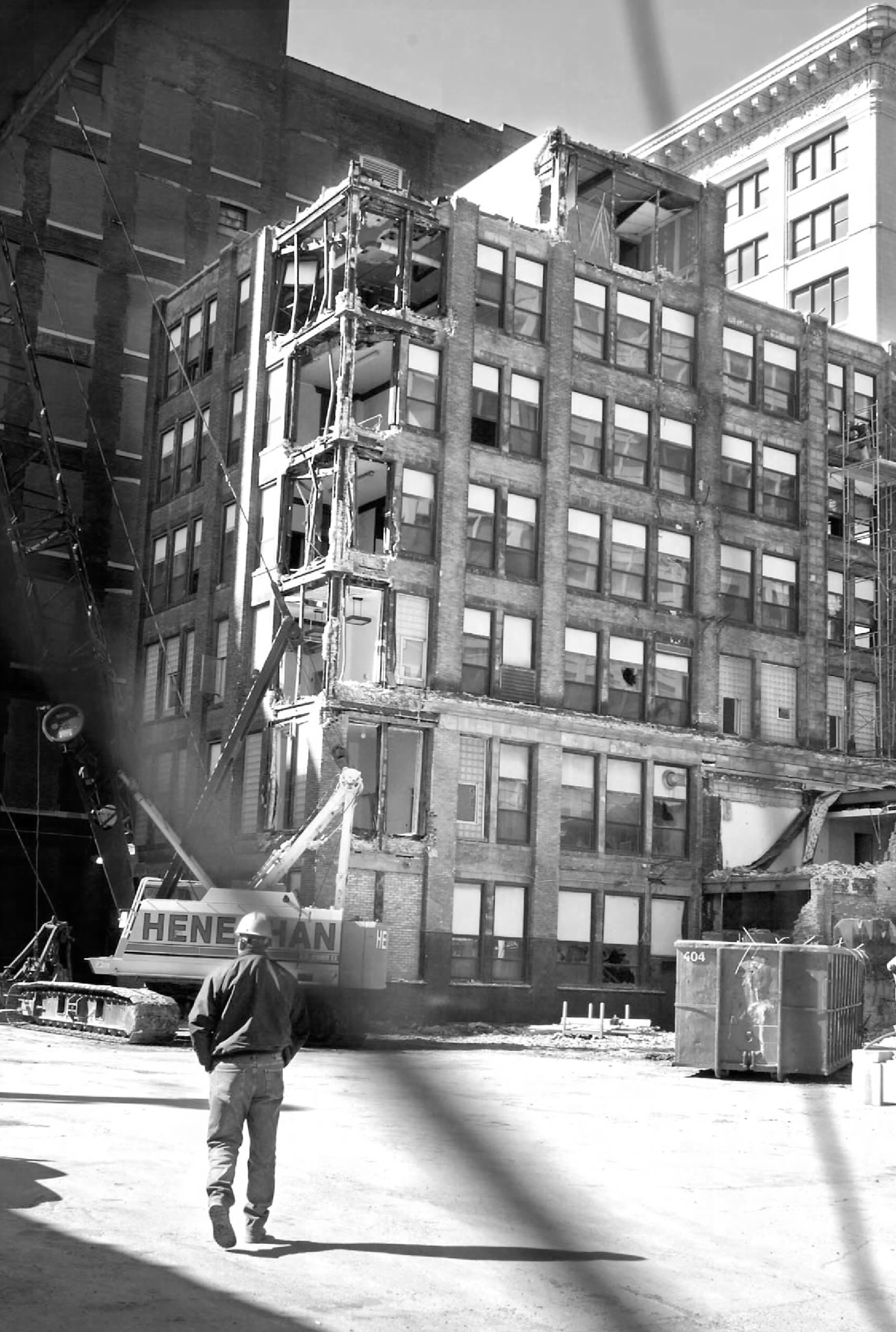