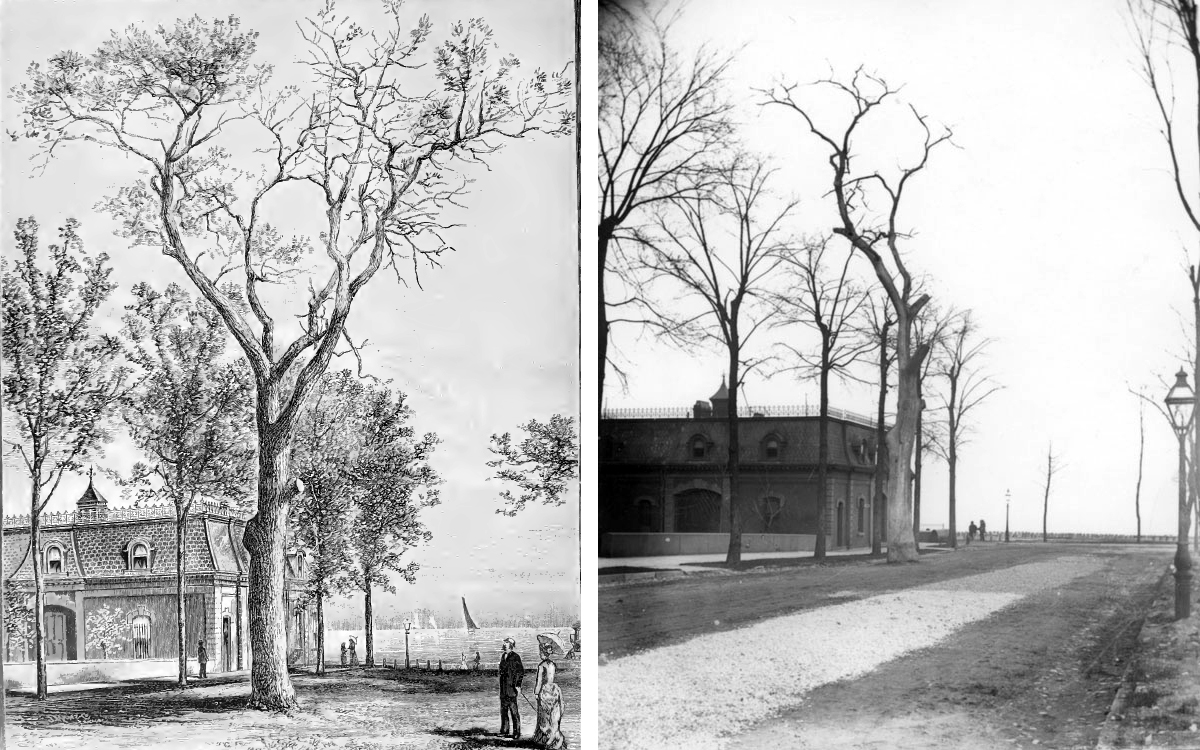 This photo on the right was taken about 1888 by George Glessner, shows it towards the end of its life. It was felled during a windstorm on May 18, 1894. 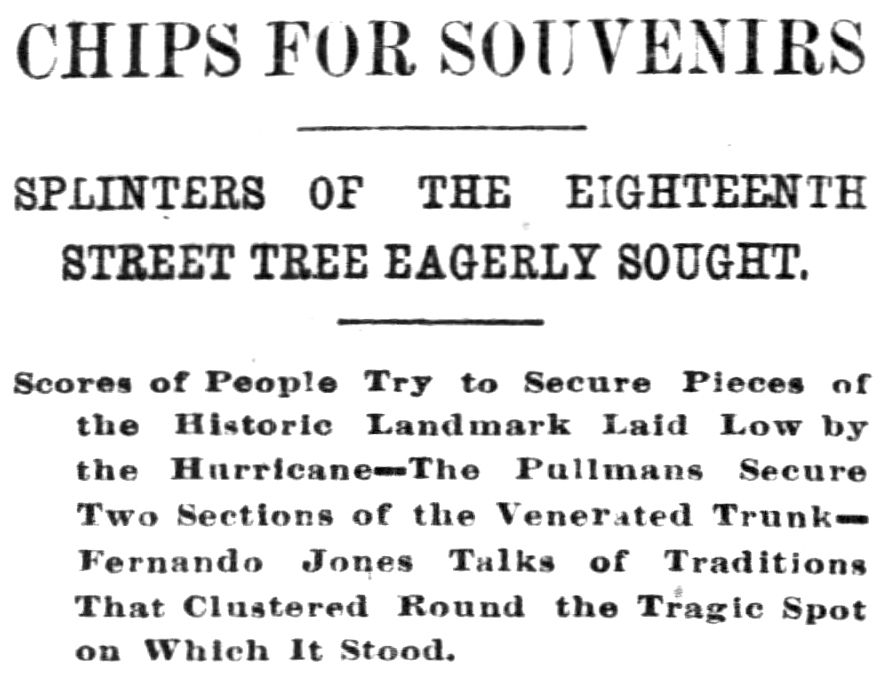 Early yesterday morning a crowd of people collected on Eighteenth street, near the residence of George M. Pullman, and began digging through the asphalt pavement of the roadway. They were as excited and industrious as if they were a rescuing party, digging entombed miners. The occupants of the Pullman mansion ran out to see what was the matter, and found the crowd was digging for the roots of the historic cottonwood tree, which after standing there for century or more, and witnessing at short range the Fort Dearborn massacre Aug. 12, 1812, went down before Friday’s storm at 5:15 o’clock in the afternoon.

This celebrated tree might have lived another century if it had been let alone, but civilization killed it. Long after it had attained a great size the grade of Eighteenth street, where it stood, was raised six feet and the earth piled deep over its roots and around its trunk. Then the inevitable gaspipe, which is always death to trees, was laid near it, and finally the whole street was covered with asphalt close to the very bark of the tree. There was nothing left for it but to die, which it did several years ago, and the northwest wind did the rest. The howling of the blast prevented its fall being heard, so that it sank to rest apparently as noiselessly as a rose leaf falls to the ground. 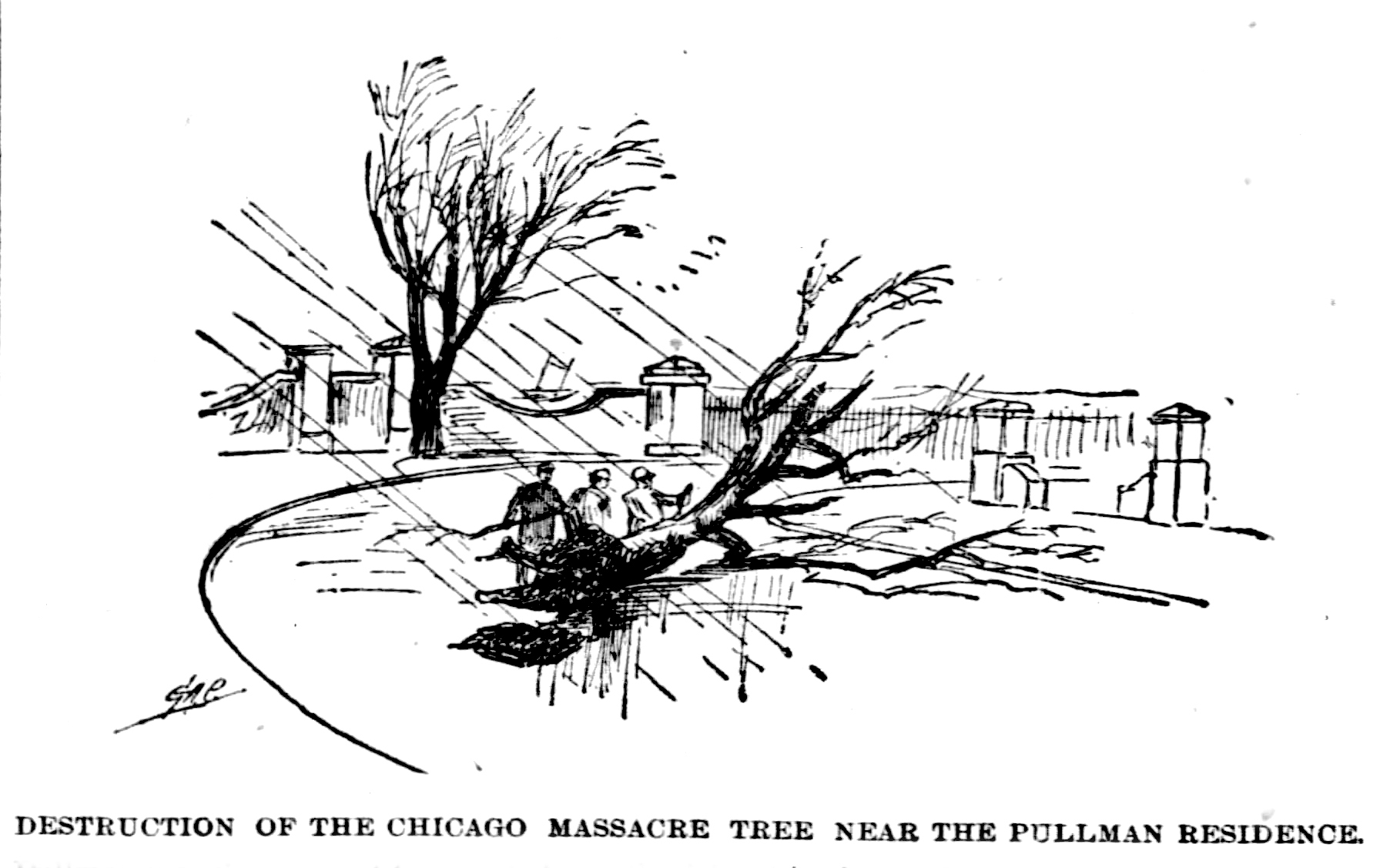 A Rush for Souvenirs.
The significance of this event was fully appreciated in M. Pullman’s neighborhood. The venerable trunk had no sooner struck the ground than everyone within a quarter of a mile who gad a saw or hatchet came to hack a piece off it as a souvenir until the Pullmans got scared. It is probable the tree belonged legally to the city, but Mr. Pullman has been its proprietor so long that he seemed to own it, and as he was absent at the East his representative begged the crowd not to carry the whole trunk away. As soon as they had scattered the trunk was sawed into two parts, and deposited in Mr. Pullman’s two gardens, one on each side of Eighteenth street, where they still lie. If any one thinks they are not watched, let him try to whittle a piece off them with a jack-knife.

The greatest friend this tree ever had is Fernando Jones, who came to Chicago in 1835, and played baseball under its branches when he was a great deal younger than he is now. But for his veneration for this ancient relic and his constant watch-care over it the street officers of Chicago would have removed it as a nuisance. It was with a beautiful poetic justice therefore that that he was in at its death. It had hardly touched the ground before he was by its side, disclaiming its history, and offering to take the corpse home and embalm it. But that matter gas been adjourned until Mr. Pullman’s return.

Traditional Cluster Round the Spot.
Mr. Jones is also the repository of the traditions concerning this tree. He says a similar tree used to stand 200 feet south of this one, and an Indian named Capt. Isaac, who participated in the massacre, often told him it was between these two trees the wagon was stopped by the Indians and Black Partridge rescued Mrs. Helm, as epresented in the bronze monument erected near the spot by Mr. Pullman. Isaac mimicked the shooting and scalping in such a realistic manner that it left no doubt in Mr. Jones’ mind that he was a thoroughly reliable Indian on this point.

Mr. Jones delights in relating how he once did the same for the tree as Black Partridge did for Mrs. Helm. Many years ago the Street Commissioner, seized with a passion for improvement, made ready to lay this tree low, though covered with leafy boughs. Mr. Jones resented this as he would the sacrifice of a human being, aqnd never ceased his protestation until the relic was delivered and appropriately protected. Mr. Pullman furnished the iron railing which was placed around its base, and which still adheres to the prostrate trunk, and Mr. Jones, with a passion for scriptural quotations, hung on it a board, which was found dangling to one of the limbs when it fell, and on which was this inscription: 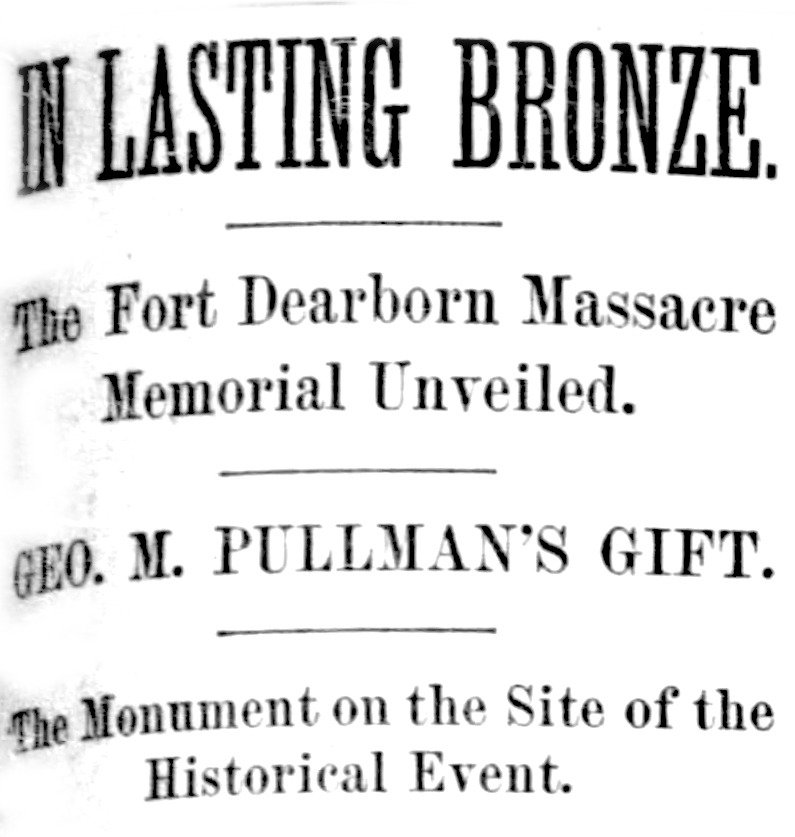 In the presence of ex-president Harrison, Chief Justice Fuller of the United States Supreme Court, and an assemblage of men and women foremost in Chicago’s business and society circles yesterday afternoon Miss Florence Pullman drew aside the silken folds that covered from view the Fort Dearborn massacre group, presented by her father, George M. Pullman, to the city to commemorate a tragedy that took place at what is now the foot of Eighteenth street eighty-one years ago. More than a year ago Mr. Pullman decided to erect this memorial, influenced by the fact that his home stands on the battlefield. Near it, in the middle of Eighteenth street, surrounded by an iron fence, is the old, dead, cottonwood tree so indissolubly associated with that brave fight and subsequent massacre. Mr. Pullman commissioned Carl Rohl-Smith to make the statue of bronze.

Simplicity marked the dedicatory exercises in charge of the Historical Society, to which the monument is given in trust. Two hundred and fifty people were present. Upon the balcony at the back of the house sat the speakers and some of the guests. Among them were:
<

Every chair upon the terraces, which slope down from the palm-house, was occupied, and many women in bright summer gowns stood up through the speaking. 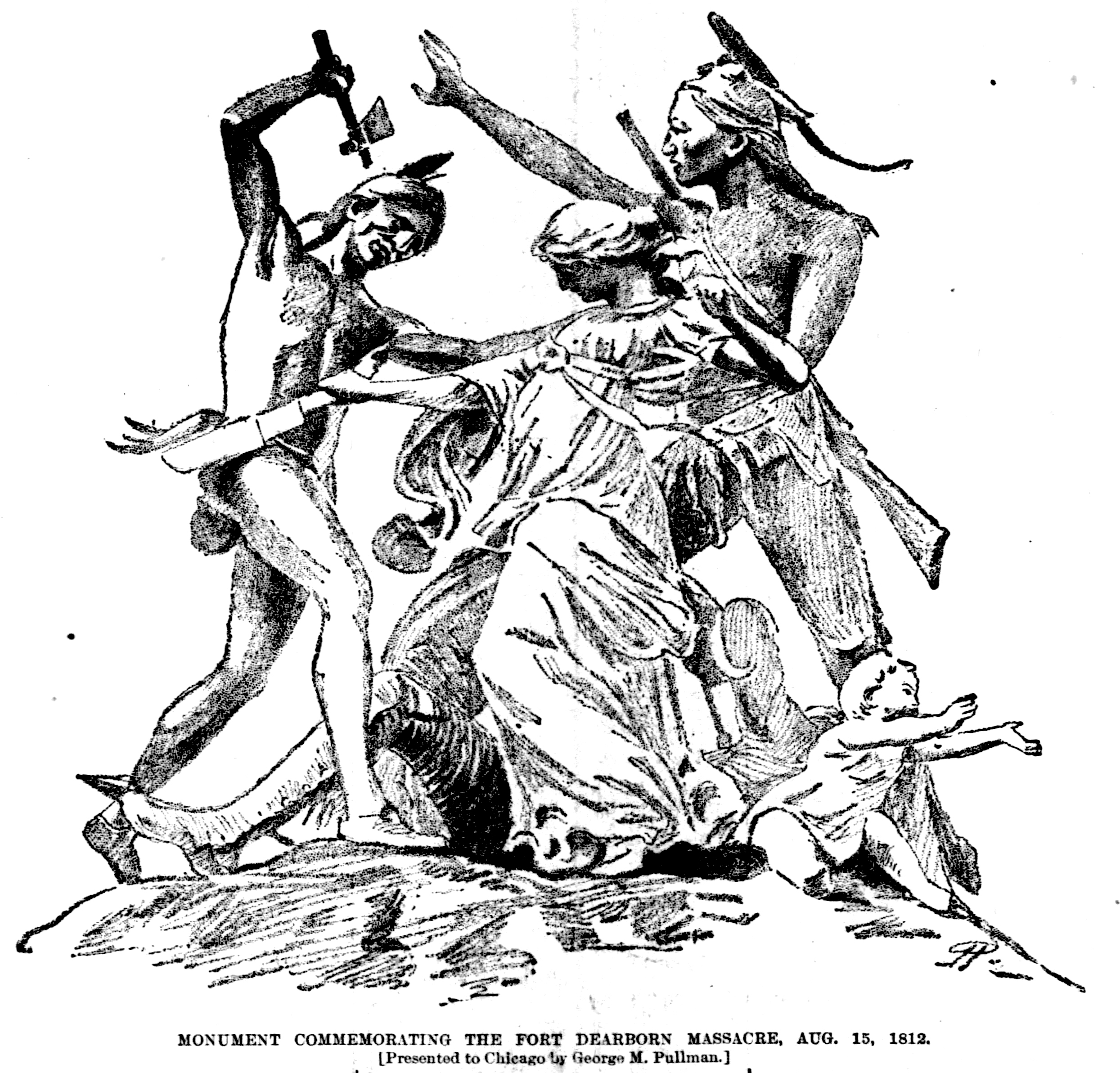 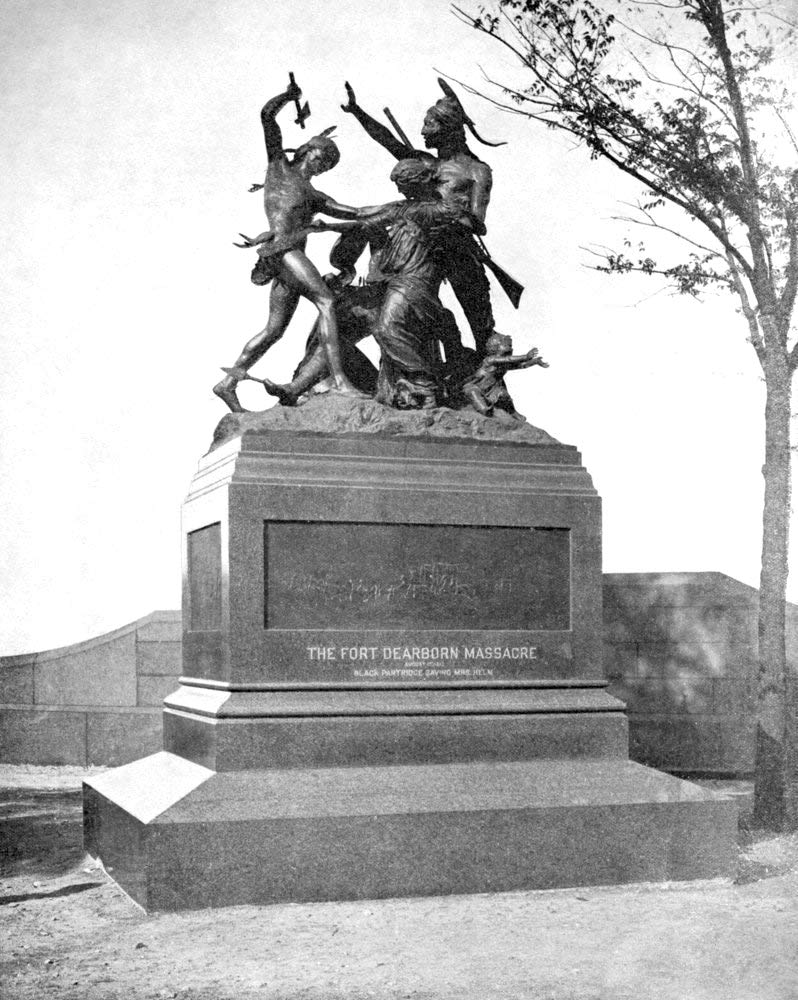 The monument was removed from the site in 1931, and installed in the foyer of the Chicago Historical Society.

In the 1970s American Indian groups protested the display of the monument as a false representation of Indians. With the revival of the Prairie Avenue Historic District during the 1990s, the statue was reinstalled near 18th Street and Prairie Avenue, close to its original site. The statue subsequently was removed by the Office of Public Art of the Chicago Department of Cultural Affairs, and placed in storage for conservation reasons.

The significance of the monument now may lie as much in its own history as in the historical events it purports to represent. A corner of the Soldier Field (1924) colonnade can be seen behind the stone wall to the left of the monument.