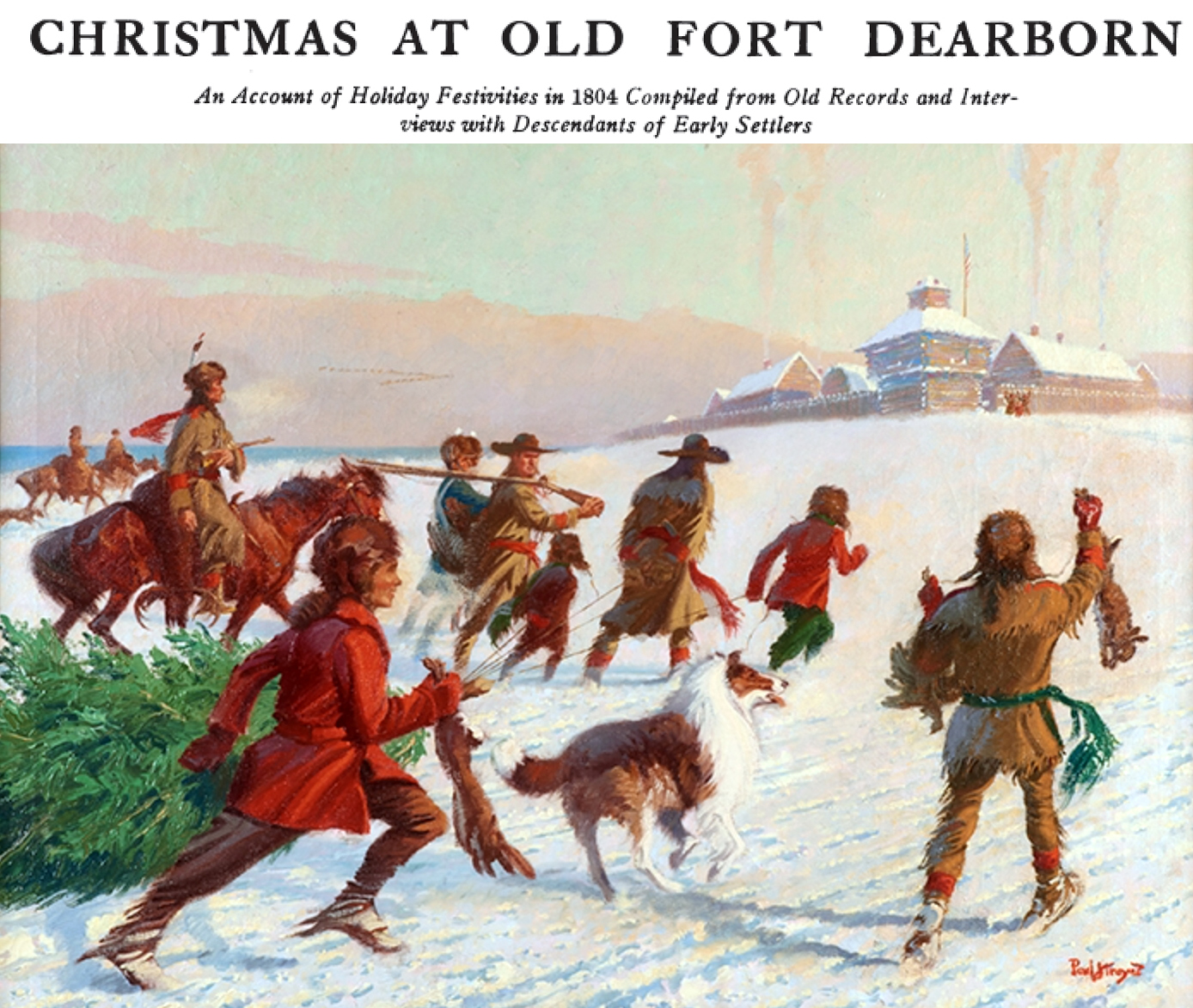 Paul Strayer’s Interpretation of Christmas Eve at Old Fort Dearborn from Painting Made Especially for Publication in the Fort Dearborn Magazine.

FOR a week the snow had been falling without cessation, and on the night before Christmas the prairies to the south of Fort Dearborn were one vast snowy desert, unbroken save for the footprints of some stray pack of wolves prowling in search of food. Black ice had formed in the river, and the desolate lake was frozen far out as the eye could see.

To the north of the river, on the hills that skirted the lake shore, a grove of pine and spruce trees broke the whiteness with their welcome green. Captain Whistler, builder and commandant of Fort Dearborn, ordered that one of these trees be cut down to add to the good cheer within the Fort. Accordingly some of the boys, warmly clad in deerskins, crossed on the ice and, aided by Ouilmette, the Frenchman whose cabin adjoined the Kinzie house, brought down a goodly tree, which, by means of ropes, they dragged across the river and up the incline to the Fort.

While they were thus engaged they heard merry shouts sounding through the frosty air, and presently were overtaken by some of the soldiers and coureurs de bois who were returning from a hunt with a fine fat buck slung across the back of an Indian pony. Others of their number turned up with some wild turkeys, while one little lad had a fine jack rabbit and another a raccoon which they had trapped. Great was the gusto with which they brought in their booty and deposited it within the stockade, to add to the store which the sutler had provided.

That night, while the stars hung low over the glistening fields and all nature seemed stilled as if in death, there took place the raising of this tree, which was decked with candles, and all joined in singing Christmas carols.

Christmas morning broke clear and bright, and soon all was bustle and confusion in the Fort, with preparations for the Christmas feast. Such a feast as it was, too, with a great venison pasty in the middle of the table, flanked with a whole roast pig at either end, quite a flock of turkeys alternating with prairie chicken, rabbit and raccoon. The cook had prepared a magnificent pudding, which he himself brought in, blazing with brandy, and set down before Mrs. Whistler. This seemed to be a signal to the officers, who, each in his best uniform and with powdered wigs, now rose and proposed the health of Thomas Jefferson, President of the United States, of Henry Dearborn, Secretary of War, under whose orders the Fort had been founded, and of the noble women who had helped them to bear the privations of the wilderness and lay the foundation for the great city which they felt sure was one day to occupy this spot, please God! They drank the toast in milk punch served in silver goblets bearing the commandant’s initials, made by John Kinzie, his silversmith neighbor.

Suddenly, as they were about to sit down, they heard a shout from the sentry in the block house, “Indians!” For an instant all hearts stood still. The next moment they had sprung to arms. A few sharp commands sent some flying to the block houses which commanded the entire region, while a squad, of which the second lieutenant was the leader, prepared to make a sortie and have a parley with the foe if possible before opening fire.

Issuing from the sally-port, which was close by the river’s bank, they descried to the westward, and walking on the ice, a single file of tall figures approaching under the lee of the shore. At their head was one of greater stature than the others, who. as the squad stepped out and challenged them, gave a peculiar cry not unlike that of a partridge. At the sound the soldiers all broke into a great shout and started forward on the run, for it was none other than Black Partridge and his band, from the region of the Illinois. They had come up to the Forks on one of their annual hunting expeditions, and were planning to surprise those at the Fort with some peltries.

Needless to say, they were welcome, for the whites had learned to know Black Partridge as a friend, and his presence a protection rather than a menace. A repast was served them with due ceremony, and= then the floor was cleared for a dance. The music was furnished by the fife and drum corps, assisted by John Kinzie’s fiddle, and accompanied by an occasional war whoop from the Indian guests.

Mrs. Whistler and John Kinzie led off in the reel, he playing and dancing at the same time with genuine Scotch fervor, while the Commandant and Mrs. Kinzie capered and curtsied at the other end in truly gallant style. Faster and more furiously played the fiddle. Higher and shriller shrieked the fifes, while more and more elaborate were the pigeon wings that were cut. Finally when the white people had not another leg to stand on, the Indians took it up and performed a “corn dance,” which, had it not been known how friendly they were, might well have been terrifying, as they turned their painted faces from side to side. brandished their tomahawks and feather brushes in the air, and gave vent to frightful cries.

The dance was followed by the distribution of gifts, which included strings of beads for the savages, pipes and tobacco for the soldiers, moccasins, Indian dolls, bows and arrows for the children, and bright ribbons from Montreal for the ladies. 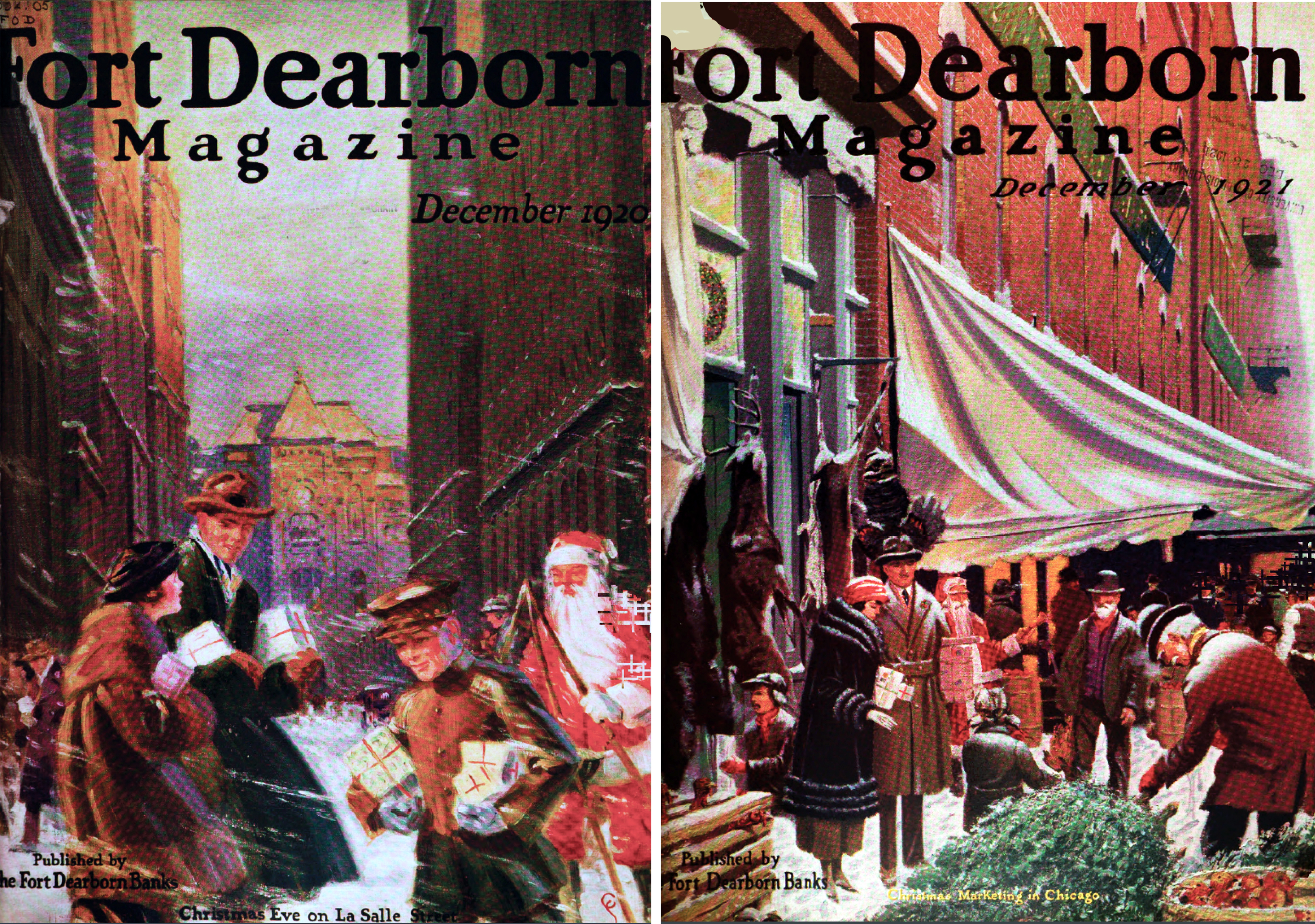 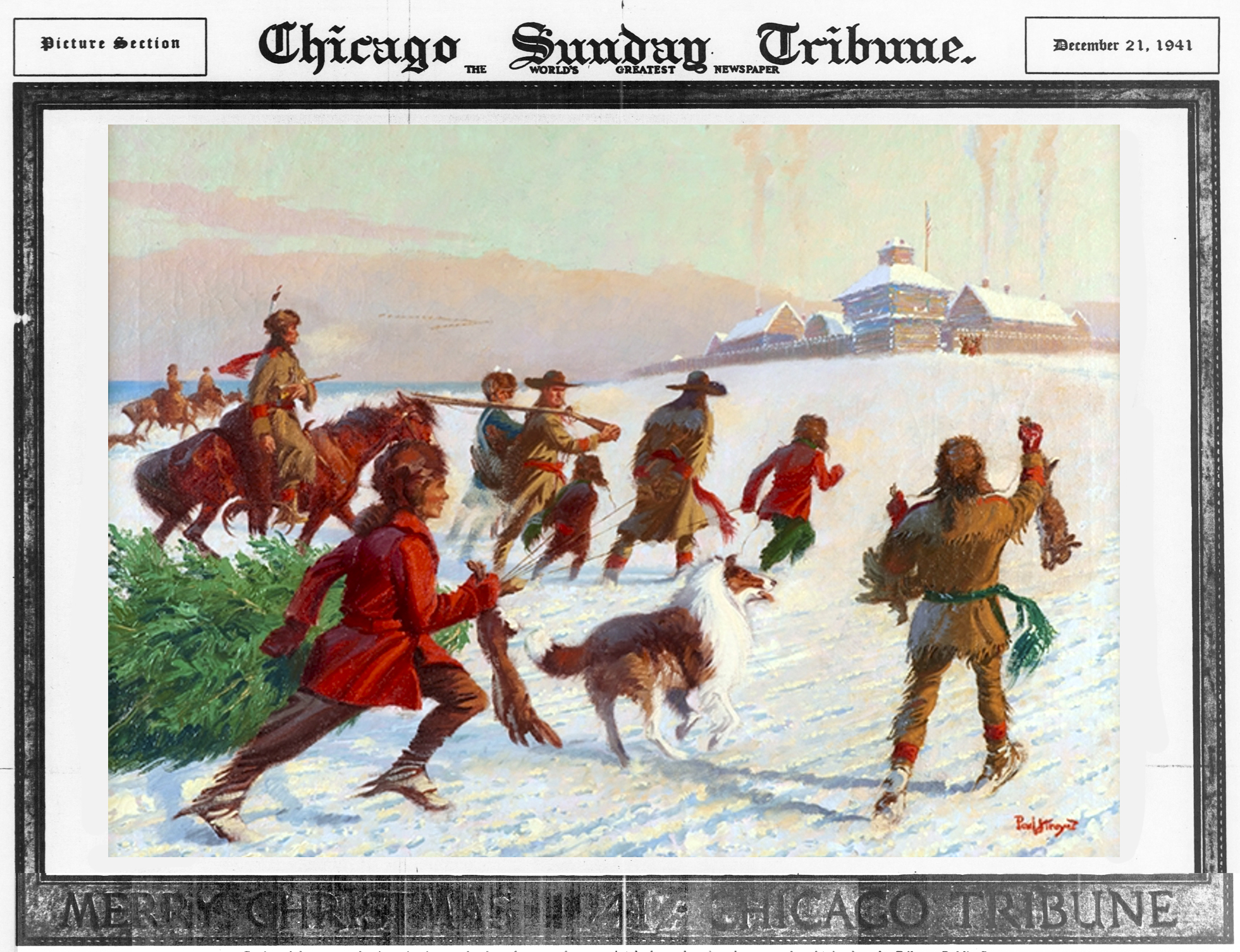 The original painting “Christmas Cheer for Fort Dearborn,” by Paul Strayer, is in possession of the Chicago Historical Society. It shows the first Fort Dearborn by moonlight on Christmas eve, 1803, with pioneers, soldiers, and children bringing in a Christmas tree for the fort’s celebration and wild game for the holiday feast.

The artist, a native Chicagoan and a resident of River Forest, is well known for his numerous historical paintings and his reproductions of deep sea square-rigged sailing ships. For this picture of the fort he collected considerable data as to its exact location and its appearance, and he is certain that the stockade and blockhouse as shown are properly oriented in relation to the river and the lake. He had for a model for the work the Historical society s Fort Dearborn model by the sculptor Vandenbergen. Moreover, the figures in the painting, which are shown moving over the snow covered ice of the Chicago river, are correctly attired, since Mr. Strayer made a thoro study of the costumes of that early day.

Mr. Strayer obtained his academic training In art at the Art Institute of Chicago. Altho he never studied directly under the late Howard Pyle, foremost among AmerIcan Illustrators, he was fortunate in acquiring the benefits of that famous artist’s criticisms. He believes that Pyle’s work probably has influenced him more than that of any other artist. 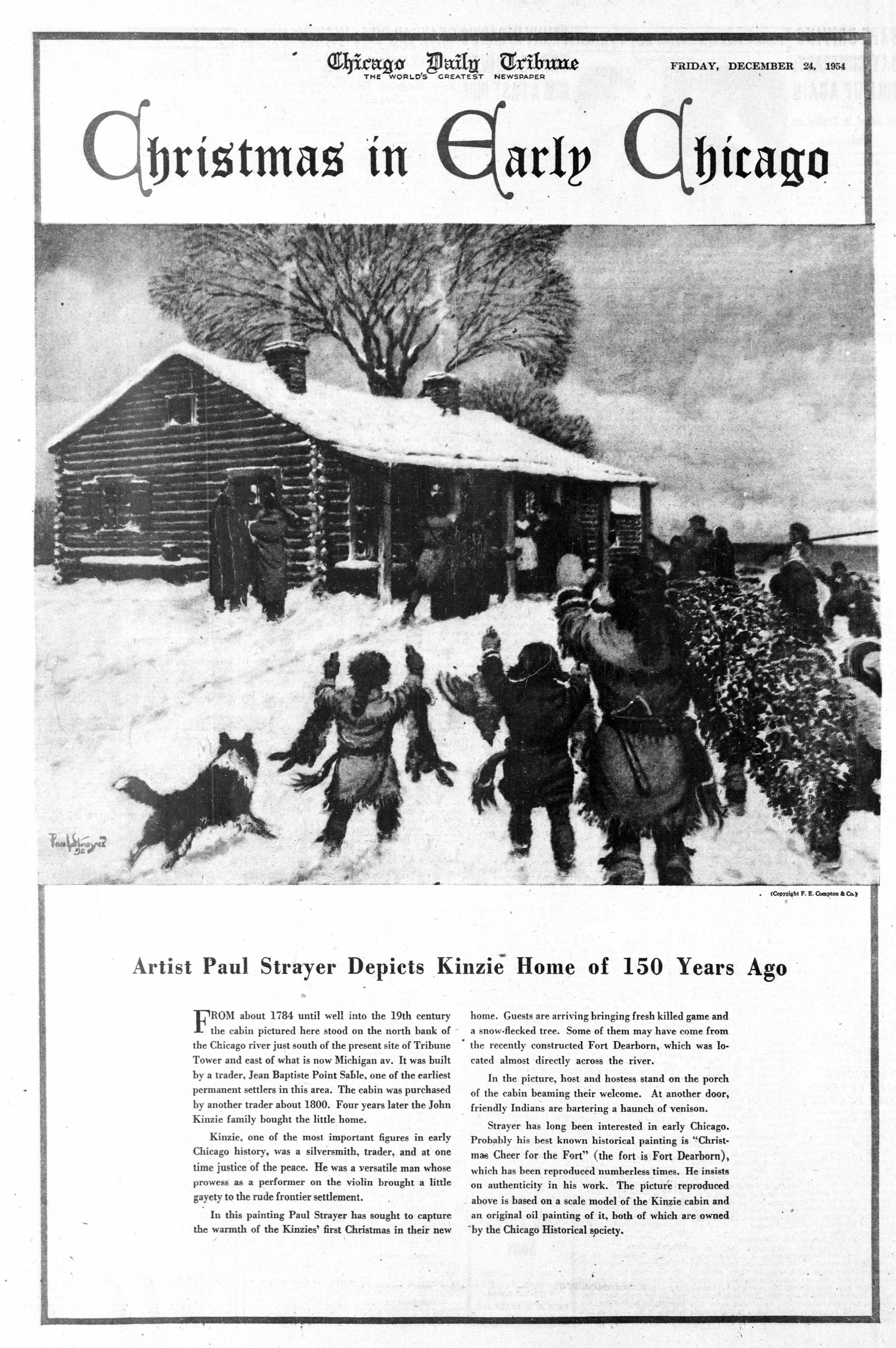 FROM about 1784 until well into the 19th century the cabin pictured here stood on the north bank of the Chicago river just south of the present site of Tribune Tower and east of what is now Michigan av. It was built by a trader, Jean Baptiste Point Sable, one of the earliest permanent settlers in this area. The cabin was purchased by another trader about 1800. Four years later the John Kinzie family bought the little home.

Kinzie, one of the most important figures in early Chicago history, was a silversmith, trader, and at one time justice of the peace. He was a versatile man whose prowess as a performer on the violin brought a little gayety to the rude frontier settlement.

In this painting Paul Strayer has sought to capture the warmth of the Kinzies’ first Christmas in their new home. Guests are arriving bringing fresh killed game and a snow-flecked tree. Some of them may have come from the recently constructed Fort Dearborn, which was located almost directly across the river.

In the picture, host and hostess stand on the porch of the cabin beaming their welcome. At another door, friendly Indians are bartering a haunch of venison.

Strayer has long been interested in early Chicago. Prob ably his best known historical painting is “Christmas Cheer for the Fort” (the fort is Fort Dearborn), which has been reproduced numberless times. He insists on authenticity in his work. The pictur e reproduced above is based on a scale model of the Kinzie cabin and an original oil painting of it, both of which are owned by the Chicago Historical society.