(CHICAGO) – A week ago it was Portsmouth’s Spartans who used the Packers to vault into first place in the National league. Sunday it was the Chicago Bears. With a 9 to 0 victory on a snow covered, windswept field, the Bears jumped into a tie for the championship and next Sunday, at Cubs’ park, will meet Portsmouth in the playoff. Twice now the Packers have been the stepping stone by which another team has ascended the heights. But unlike the weary, bedraggled old men who took such a lacing at Portsmouth a week ago the Packers Sunday were the Packers of old. They bounced back in no uncertain way after their trouncing on the banks of the Ohio, although few expected them to, and they played enough football to deserve almost a better fate than the 9 to 0 licking. All through the first half they harassed the Bears and twice missed what looked like sure touchdowns only because of the cold and wet ball. On one occasion Arnie Herber fumbled the slippery pill on the one-yard line and on another Wuert Englemann, out in the clear about 15 yards from the goal with nobody near him, dropped a pass right up his mitts.

SCORE IN FOURTH QUARTER
The Bears scored all their points in the fourth quarter. They got three points when Tiny Engebretson, the old 225-pound Northwestern tackle, whirled a place kick through the snow and uprights from the 14-yard line, and six points more when the big snowplow, Bronko Nagurski, broke through left guard, swung to his left and outplowed Verne Lewellen through little snow drifts in a race to the goal 56 yards away. Although beaten the Packers will go through with their trip to California and Hawaii as planned. All but five of the regular squad, Verne Lewellen, Lavvie Dilweg, Cal Hubbard, Paul Fitzgibbons and Dick Stahlman, will make the trip to Hawaii where on Christmas Day the team will play the University of Hawaii and on New Year’s Day an all-star island eleven. The five will join their mates in California on the return trip, however, and play in the Knights of Columbus charity game against an all-star coach team in San Francisco January 22 and in another charity game, against the Southern California all-stars, at Los Angeles January 29. The team will sail from Los Angeles Friday night. The Bears were as happy as school kids in a snow fight after Sunday’s game, for by winning, as mentioned before, they tied Portsmouth in the National league race. Each team finished the regular season with six victories and one defeat for a percentage rating of .857. Green Bay, in third place, won 10 games and lost three for a standing of .769. 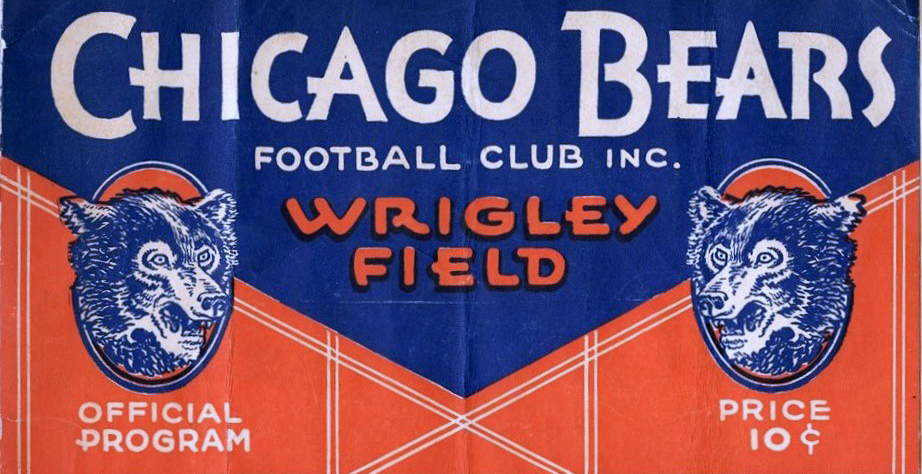 A FIELD OF SNOW
Sunday’s finale was played under impossible conditions. The field was blanketed with snow, although some attempt had been made to sweep it off, and it made the play a mess. The boys, most of who wore gloves, came out of each scrimmage looking like snowmen. After each play Referee George Lawrie had to wipe off the ball with a towel. All phases of the play naturally suffered. The men skidded and slipped, dropped passes, fumbled. But it had to be expected on this field. Considering the conditions, Herber, Nesbitt and Molesworth all did excellent punting, although it was far below what they would have done with a dry field. After a first quarter of punts, in which Hinkle’s superior kicking gradually threw the play into Chicago’s territory, the Packers in the second quarter made their first bid to score. They started in midfield, and on two passes, both Herber to Grove, they reached Chicago’s three yard line. Hinkle on the first play here hit a stone wall, but Herber on the next, despite an offside by the Bears, smashed to within six inches of the goal. With the field as it was, the Packers here might just as well have declined the penalty, it seemed, and taken the gain. But they didn’t. They took the penalty, which left them on the one yard line. And on the next play Herber fumbled. Kopcha recovered and Nesbitt at once punted out of danger.

PACKERS POUND RIGHT BACK
Undaunted, the Packers set sail as soon as they got the ball again and on a pass, Herber to Blood, they brought it right back to the 12 yard line. Herber slipped in attempting to pass two plays later, however, and lost 15 yards. That was all. The Packers never threatened again. It was the Bears’ turn to do things in the second half and the Bears did. Early in the third quarter a 15 yard pass, Doehring to Grange, followed by a 40 yard run, brought the ball to Green Bay’s 13 yard line. Grange had an open field ahead as he raced for the goal but McCrary nailed him from behind. On three plays here the Bears picked up only seven yards, and on fourth down Johnsos tried a placekick that squirted harmlessly to one side. Once more, however, the Bears pounded back and reached Green Bay’s 10 yard line on a pass, Doehring to Johnsos. But Nagurski fumbled two plays later and Cal Hubbard recovered. With these two Chicago threats squelched, it appeared as though the game might end in a scoreless tie, but Herber fumbled a punt on his 24-yard line early in the fourth quarter and Oakie Miller recovered for the Bears. A pass, Doehring to Brumbaugh, and an eight-yard gain over center by Nagurski brought the ball to Green Bay’s 11 yard line, and four plays later, after Grange and Nagurski had picked up six yards more, Engebretson dropped back and booted the field goal. Brumbaugh held the ball.

DANDY KICK
The kick was a beauty. Engebretson couldn’t have done better with a dry ball and a dry field. Those three points were enough to win, as later events proved, but just to sew up the game beyond any possible doubt Nagurski smashed over center with a few minutes left to play and raced 56 yards to the goal. A forward pass, Doehring to Grange, brought the ball to the one-yard line as the game ended. Five thousand fans braved the weather and staved through to the finish, for despite the condition of the field, this was a ball game.

Spartans Then Yield a Safety.

BY WILFRID SMITH
The professional football championship of the United States is the property of the Chicago Bears. They won that title last night at the Chicago Stadium by defeating the Spartans of Portsmouth, O., 9 to 0, before a near capacity crowd of 11,198. Officials announced that the gross receipts were in excess of $15,000.

For three periods the teams waged a scoreless duel, in which the Bears had the better of the gains in yardage. Then with ten minutes to play, Bronko Nagurski tossed a short pass to Red Grange, who was standing in the Spartan end zone.

The touchdown was that the Bears needed to assure them of the championship. Tiny Engebretsen, however, place kicked the ball between the wooden uprights and into the mezzanine for the full value of Red’s score.

Safety Follows Touchdown.
Then, just before the end, Mule Willson of the Spartans, ready to punt from behind his own goal line, fumbled Clare Randolph’s pass from center and the ball rolling out of the end zone automatically gave the new champions two more points.

Grange and Nagurski received the roaring tribute of the crowd, which had begun to believe that for a third time the Bears and Spartans were to play a game, but it was Dick Newbitt who presented the scoring opportunity. Nesbitt raced back from his position at defensive right half back, leaped high into the air and intercepted a forward pass by Ace Gutowsky. He came down running and with the aid of excellent blocking, carried the ball to Portsmouth’s 7 yard line.

Bronko Pounds Away.
The touchdown immediately was protested by Coach Potsy Clark of Portsmouth, who rushed in the field shouting that Nagurski was not five yards behind the line of scrimmage and that the forward pass was illegal. Referee Bobby Cahn of New York ruled that Bronko had complied with the rules.

Nesbitt and Keith Molesworth of the Bears, and Gutowsky of Portmouth repeatedly kicked over the lines so that the punt receivers had no opportunity to bring the ball down the field.

The playing field also was not to the liking of John Doehling, the Bears’ long distance forward passer, whose first throw nearly landed in the mezzanine. However, the playing conditions met with the approval of the fans. The game was completed in almost record time, and although the yard lines were not marked the spectators had no difficulty following the progress of the ball. 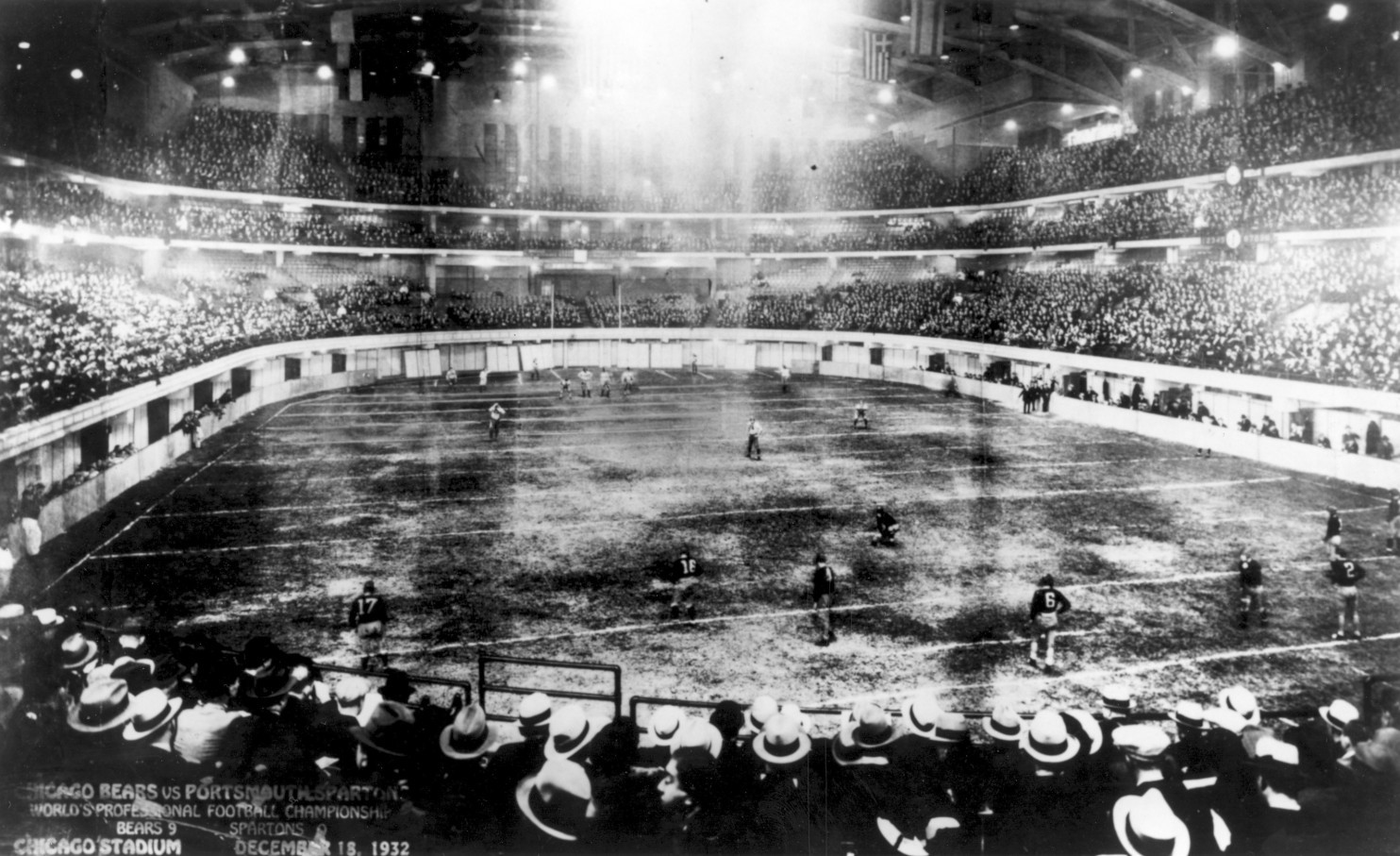 The 1932 NFL playoff game was moved indoors because of bad weather. But Chicago Stadium was not designed to handle football games, so the playing field had to be shortened, and no field goals were allowed.

Spartan Attack Required.
The Spartans threatened several times in the first half, but their best opportunity came in the final minute of the second quarter. Had they capitalized then the championship might have been carried back to Ohio. This opening was created when John Cavoskie intercepted a forward pass for Carl Brumbaugh and raced 30 yards to the Bears’ 6 yard line.

Glenn Pressnell, who was the outstanding ground gainer for the Spartans, hit the center of the line for a yard. Gutowsky followed with a yard at guard. Presnell and Gutowsky completed the series of four plunges, but they still were short of the goal and the ball changed hands. Before the Bears could start to play the gun ended the half.

Neither team attempted drop kicks nor place kicks although each was in scoring distance. This form of attack was banned by agreement.

Hard, Accurate Tackling.
the line play and the open field tackling were accurate and hard. Both teams took advantage of the firm dirt, which covered the terrazza floor of the Stadium, to get the best results from their running plays. Grange was knocked out in the first quarter, but he recovered in time to return to assist the Bears to their first championship since 1924, which was one year before Grange completed his competition for Illinois and cast his lot with the professionals. Joe Kopcha, regular guard, was injured in the last period.

The game was played with a minimum of penalty. Portsmouth received the only major loss when it was set back 15 yards in the last period for holding. Previously the Spartans were penalized three times for offside. The Bears were offside once and lost a total of 15 yards more for extra time out and for delay. Two of the Spartans’ five yard penalties, for incompleted forward paces in a series, led indirectly to a safety. 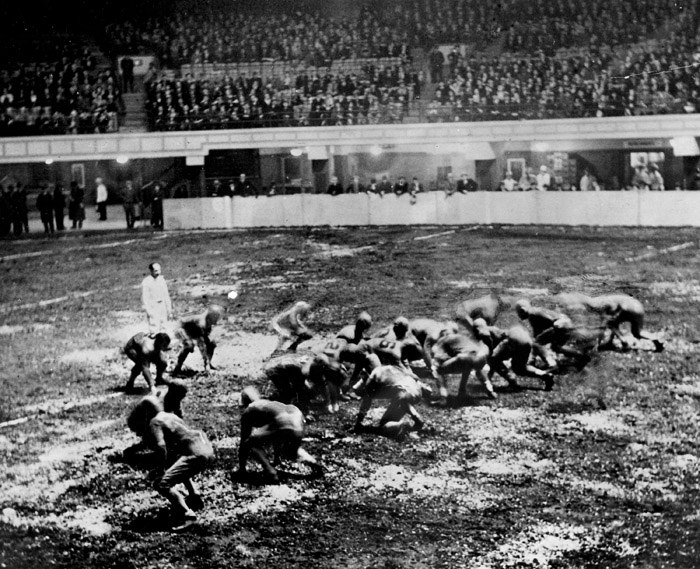 Let’s Pass Escape.
The Spartans were trailing 7 to 0 and incompleted passes set them back to their own 5 yard line on a fourth down. Wilson then let the pass from Randolph slip through his fingers, the ball bouncing out to the end zone for two points for the new champions.

The Bears made eight first downs to five for Portsmouth. The Spartans attempted 12 forward passes, of which two were completed for a total of 28 yards. Five were intercepted. Three of the Bears’ 16 forward passes were completed for a gain of 18 yards, included was the winning touchdown pass from Portsmouth’s 2 yard line. Three of the Bears’ passes were intercepted.

Last night’s victory gave the Bears a total of seven for the season. They were defeated once, by Green Bay, 2 to 0, and six other other contests ended in ties. The Spartans, with six victories and two defeats, finished in third place in the National league, a step behind Green Bay, who held the championship for three years. 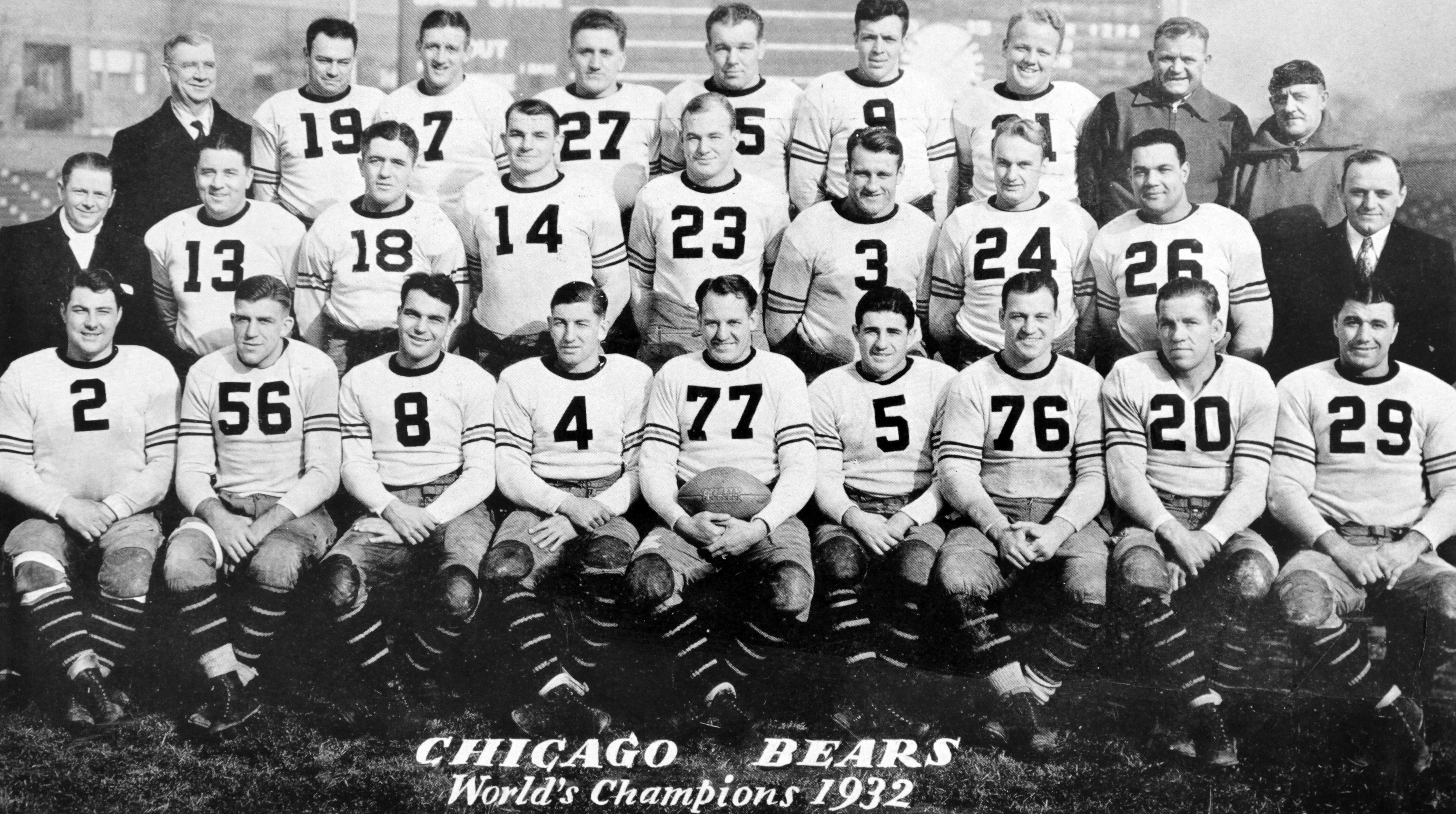