The following article is from Chicago the World’s Youngest City published in 1929, written by Walter H. Eckersall, football player, official, and sportswriter for the Chicago Tribune.

Sports Get Liberal Support From Chicagoans

Over the span of years since the World’s Fair of 1893 was held, there has been a vast improvement in sports, professional and amateur. Thirty years ago, sports of various kinds were looked upon as events for the grown-ups. The rising generation was given little or no encouragement. The boys and girls had to shift for themselves. There was no incentive for them to practice or train. They had no toboggan slides, the snow on the lagoons in the parks seldom was cleared away, and the youngsters had to make the best of those conditions. That is the reason why so few good athletes were developed in the preparatory schools, universities and colleges.

Soldiers Field in Grant Park Has a Seating Capacity for 200,000 Persons

Horse racing flourished in Chicago until 1906 when the famous Washington Park race track was closed by city officials because of irregularities. Highball won the last American derby at this famous course, considered one of the great ones of the world. It was bounded on the north by Sixty-first Street and on the south by Sixty-third Street. The eastern boundary was Cottage Grove Avenue and the western, South Park Avenue. That famous track was noted for its colorful gatherings. On Derby Day, there was one continuous stream of fashionably-dressed women seated in horse-drawn conveyances of various kinds. Open betting was permitted. The track was the scene of the great trotting races between Joe Patchen, the pacer, and Star Pointer, the trotter. McChesney, a big, black horse, won many a stake there. At that time there were several other tracks near Chicago, including those at Hawthorne and Roby. During the winter months, trotting races were held on Grand Boulevard on the south side, starting at East Thirty-fifth Street. The fastest trotters and pacers were matched, and “cutters” were used instead of wheel sulkies. Those events
generally took place on Wednesdays and Saturdays. They attracted thousands of spectators who stood in the bitter cold to watch the spirited racing. 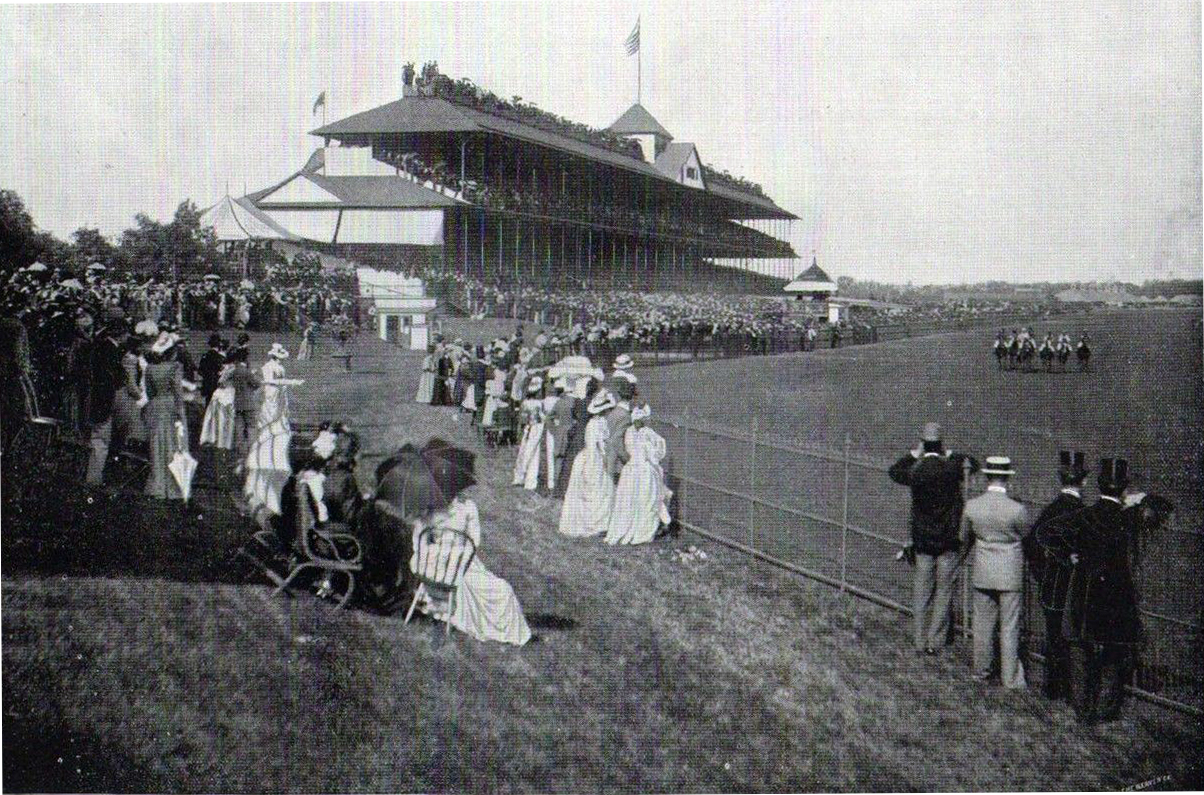 Following the Fair of 1893, “bike” racing was at its peak. Aside from the six-day “go as you please” races held in the old Coliseum at East Sixty-third Street near the Illinois Central tracks, and those held in Tattersall’s arena, there were the usual long grinds from Milwaukee, Elgin, Aurora and other cities, to Chicago. Bicycles of all kinds, even the high, front-wheel and small, back-wheel, were ridden in those events. Then there were the usual Pullman road race and various events sponsored by the many cycling clubs in Chicago. The tandem and the “quad” were frequent sights on the boulevards on Sundays and holidays, when all riders turned out the same as do the motorists of today.

Rowing was indulged in, but not on an extensive scale. In the early nineties, the Farragut Boat Club, located at Thirty-first Street and the lake, sponsored most of the events. Everett C. Brown, a nationally-known amateur athletic official, was a member of that club. Yachting also took a start, and expanded rapidly in the next few years.

In 1876, organized baseball put in an appearance and the Chicago team was one of the charter members. Its grounds were on the west side. In 1900, the American League was organized, and professional baseball started to attract considerable interest. The White Sox Park, with its wooden stands, was at Thirty-ninth Street and Wentworth Avenue. Teams in seven other large cities were organized, and the first league games were played in that year. In most of the large cities there were National and American League teams, and the “fans” soon started to show their allegiance to members of either league. 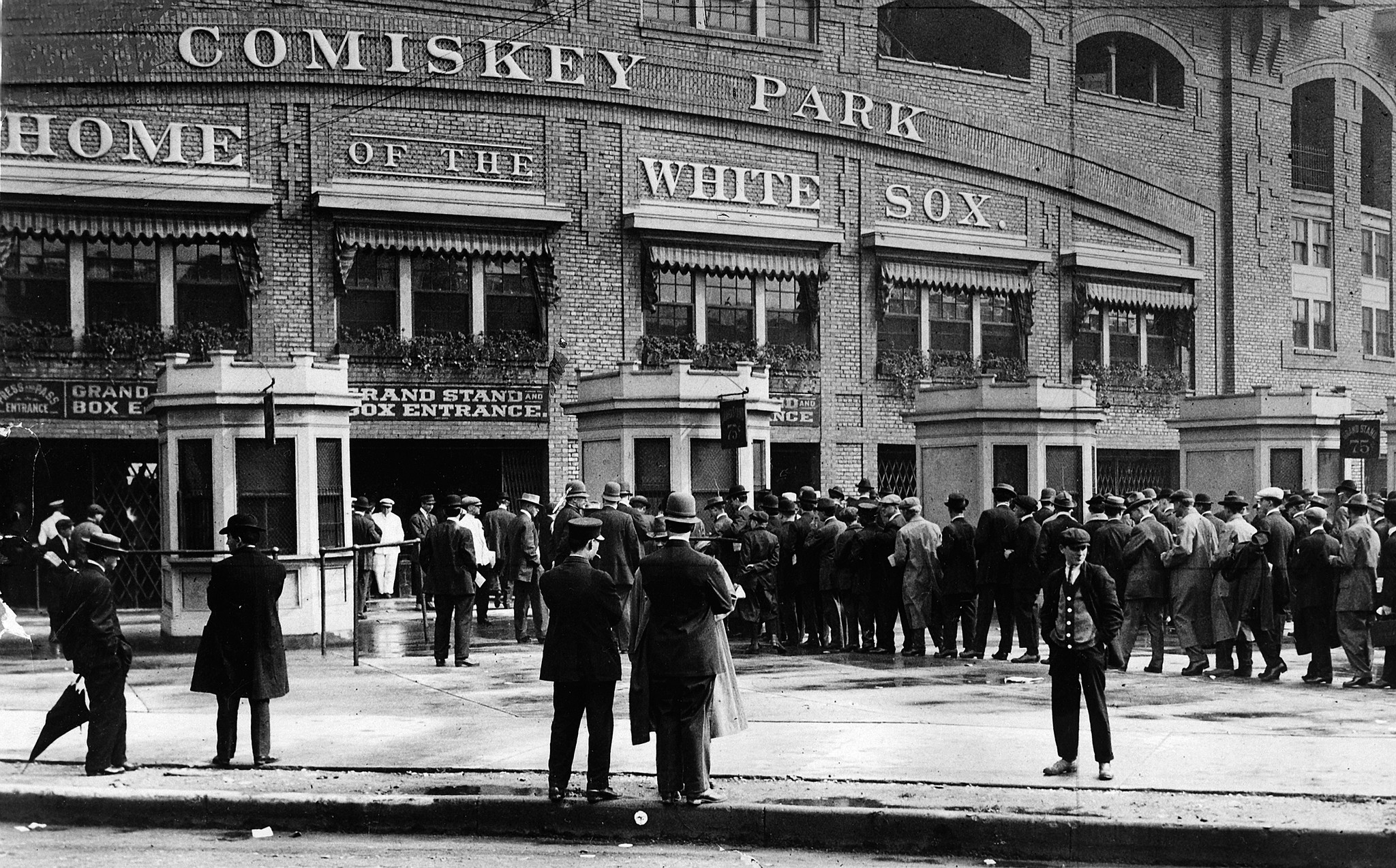 The University or. Chicago was founded in 1893, and President Harper, its first chief executive, engaged Amos Alonzo Stagg for its athletic director and coach of all teams. At the time of his appointment, Stagg was studying for the ministry. He was one of the noted athletes in Yale’s history. He pitched on the baseball nine and played “end” on the football team. Games of various the northwest corner. It would accommodate about 1,000 “fans.” Ropes were stretched around the boundaries of the playing field to keep spectators off the gridiron. The same general conditions in athletics existed at Northwestern. The Purple grounds were called Sheppard Field, located near the lake at the north end of the present campus. Like Marshall Field, there was a small, covered stand at the south end, but no bleachers on the sides. Contests were held with freezing winds blowing across the field. In the fall the gridiron was as hard as any pavement; but the “pig-skin warriors” did not appear to be distressed by such obstacles.

Boxing flourished in Chicago previous to the Fair of 1893. Bouts were held in the Apollo Hall, Battery D Armory on the lake front, in little America Hall and at Tattersall’s. George Siler and Malachv Hogan were the popular referees at that time. Terry Mc- Govern, Joe Gans, Tommy Ryan, Tommy White, Bennie Yanger and Abe Attel were among the many notable fighters of that day who appeared in local arenas. But the fighters killed their own game. The law stepped in and put an end to boxing in 1900, after Terry McGovern and Joe Gans engaged in a fiasco at Tattersall’s. It was a “fake” fight, and authorities put a ban on the sport. A few sneak fights were held occasionally afterward, but the sport was dead so far as Chicago was concerned.

As the years rolled by, there was a constant revolution in all branches of sport. The coming of the automobile gradually drove the bike and horse-drawn vehicles into the discard. Instead of numerous trotting and running races and “bike” contests, races between automobiles began to attract attention. Tracks which had been the scenes of many a running and trotting race were converted into autoracing courses. This was especially true of the smaller towns where agricultural fairs were held annually. 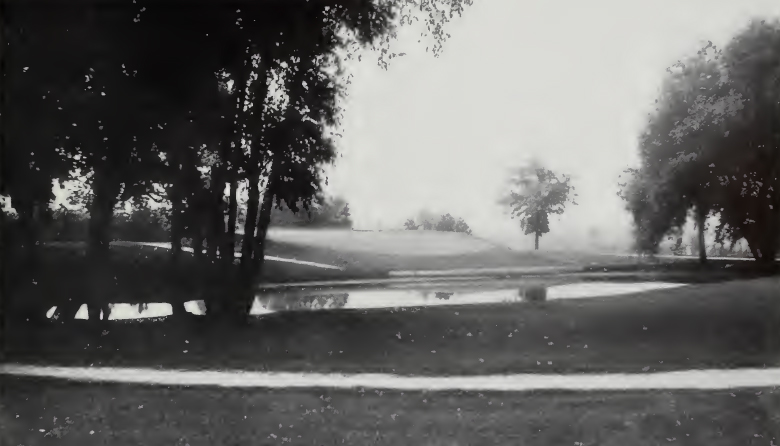 Golf was introduced in Chicago soon after the World’s Fair, being for the next few years limited to playing on the courses of some of the country clubs. But the allurement of that sport led to a steady expansion of its scope in this vicinity. Golf clubs in the environs of Chicago are numerous now; and many important championship matches have been played over their links. All of the large public parks of the city have courses, and the Cook County Forest Preserve is liberally provided with facilities for golfers who care to seek their recreation in that attractive area.

Polo has been played in Chicago and nearby perhaps longer than golf; but the play has been confined to the private grounds of the polo clubs. 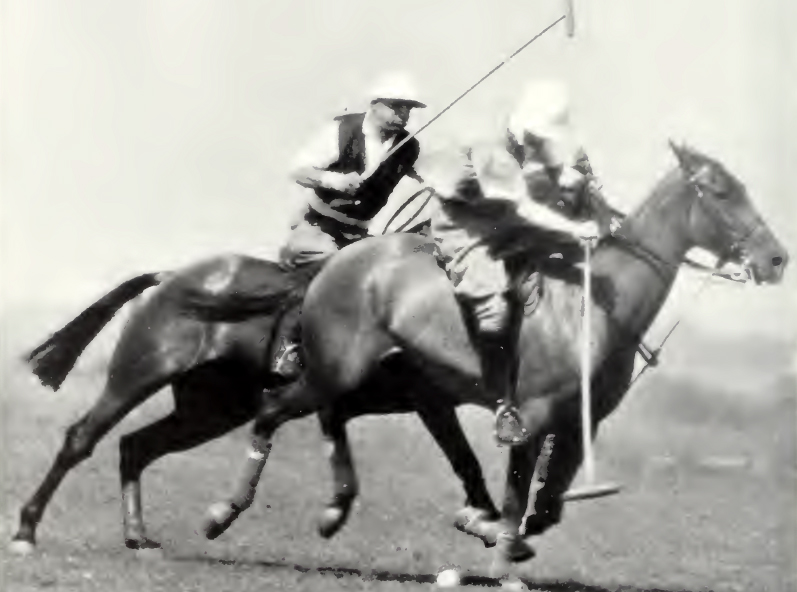 Gradually, the universities and colleges throughout the nation grasped the spirit of athletic competition, with the result that old stands and fields were not large enough to hold the spectators who had been aroused to take a keen interest in inter-collegiate athletics. Consequently, coaches of experience were engaged to teach players the intricacies of the various sports. The western conference which was organized in 1896 at a meeting of delegates from Minnesota, Wisconsin, Illinois, Northwestern, Purdue, Michigan and Chicago started to function in all suitable branches. Indiana and Iowa were admitted to membership in 1899 and Ohio State in 1912. University presidents and heads of the athletic departments realized that something must be done to accommodate the crowds which were eager to see the red-blooded collegians in action on the football field, cinder path and baseball diamond. One by one, colleges and universities fell into line. As time wore on the old wooden stands were torn down and monster stadiums were erected. Some of these today will hold close to 100,000 spectators. 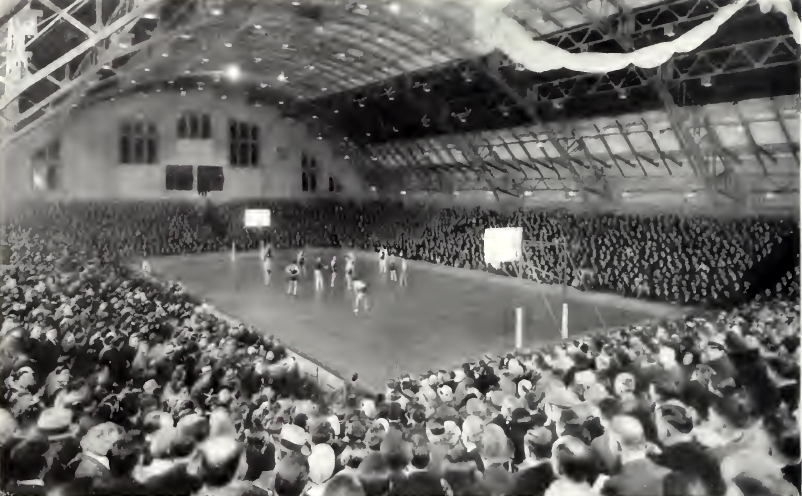 Patten Gymnasium Crowded with “Fans” During a Conference Game

Basketball came along, and now is the major winter sport in all our universities and colleges. In order to take care of the crowds, field houses have been built at a number of the institutions. Some of them will seat comfortably as many as 10,000 spectators. Tennis courts were installed, running tracks were remodeled and everything was done for the benefit of those who cared to engage in wholesome outdoor and indoor exercise.

Practically the same situation existed in the preparatory schools. Instead of the haphazard manner of playing games in vacant lots or in the public parks, the high schools played their games on the university fields. In many cases, high-school elevens met college and university teams or engaged in “curtain raisers” to the regular ‘varsity struggles. Leagues were organized, proper coaching was secured and the teams were outfitted properly in the various school colors.

In 1915, when William Hale Thompson was first elected mayor of Chicago, lie founded the playground system. The city secured sites in various sections and equipped the grounds with various sorts of gymnasium apparatus. In later years the system developed, until now there are nearly one hundred playgrounds in Chicago. Realizing what the system meant to the youth of Chicago, The Chicago Tribune was among the first organizations to promote systemized contests for the patrons of the playgrounds. A skating meet was held, with “preliminaries” decided in various districts; and the “finals” at certain grounds. Later on, The Tribune conducted a track and field meet for the youngsters. Those affairs proved so attractive that heads of the playgrounds system decided to arrange their own contests. In 1907, The Tribune inaugurated its silver skates derby. Scarcely one hundred entries were received for the first race, which was a free-for-all open to all, regardless of age. This event developed so fast that races had to be arranged for hoys and girls of various ages. Of late years, six silver skates races are held and the list of entrants generally exceeds 4,000. The Tribune has also sponsored water carnivals, for the enjoyment of as many as 80,000 persons, who swarmed to the long lagoon in Lincoln Park.

That keen interest which the youth of the nation took in sports following the Fair of 1893 enabled the United States to send to Europe men who were physically fit to assist the allied nation to whip Germany into submission. It was those athletically inclined boys who had learned the spirit of combativeness, in the American universities, colleges, preparatory schools and on the public playgrounds, who were among the first to enlist. It was that aggressiveness cultivated on the athletic fields which made the American soldiers so effective in the world’s most titanic struggle.

The manner in which our soldiers performed put at rest those adverse criticisms of American athletics which had begun to appear previous to the war. Our soldiers had the stamina, gained through athletic contests, to carry them through, despite the discouraging conditions they encountered.

Since the war, athletics have been developed on a larger scale Other nations have sent representatives to America to learn something of our facilities for athletic training. Some have gone so far as to engage Americans to teach their boys and girls the various ways to put students and others in that same physical condition that characterized the appearance of the American army in Europe. Practically every sport is improving. Football formations are developed scientifically. Baseball is played like a machine. Track and field records are being broken with regularity. Through the efforts of prominent business men, boxing and horse racing have been legalized in the state of Illinois. There arc four excellent tracks near Chicago, and some spirited racing will be seen at these tracks in 1933. Soldiers’ Field in Grant Park, which can scat 200,000 persons, will be the scene of many championship boxing matches. Col. R. R. McCormick, chairman of the second world’s fair athletic committee, is bending every effort to make the athletic competition the greatest ever seen in any part of the world.