A COLORED DETECTIVE PLAYING ALDERMAN.
A colored detective, named James Shelton, was charged with receiving a present without permission. 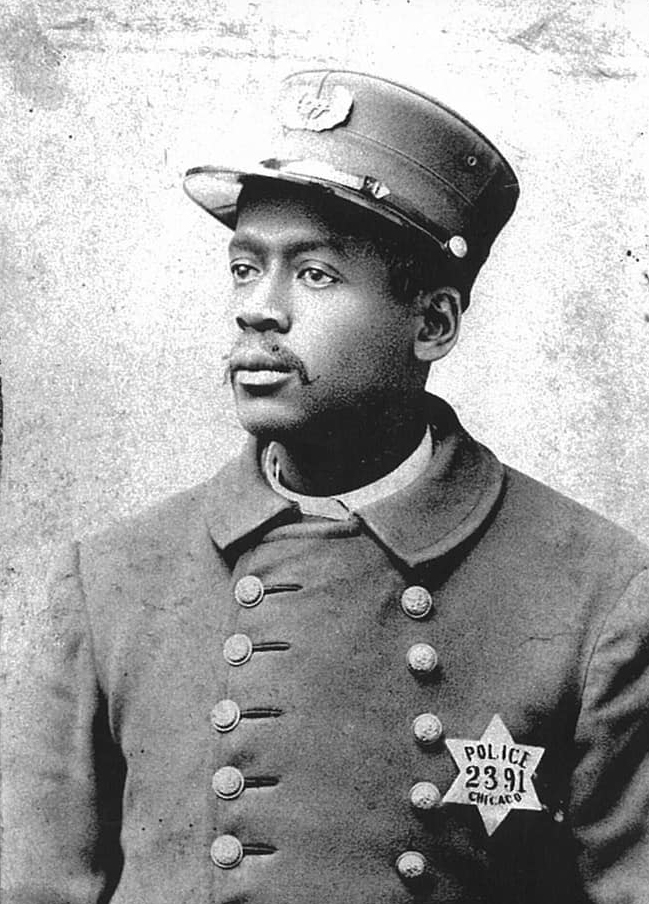 The colored detective said he had done so. He had been directed to look for a lost horse and buggy, which he found. He then found the owner, who promised him $25 if he found his property. When the owner found his business, he said he would “see (Mancel) Talcott (of the Police Board) and Bill Kennedy (Superintendent of the Force) about it and see how things were.”

Mr. Floyd, the owner of the horse, said he had advertised a reward of $25, which brought the colored officer round. The buggy being produced, the reward was paid over. Mr. Floyd then asked him if he, as a cityu official, had a right to take the money. The colored detective said he did not know. The witness told him to take the money, and he would inquire for Talcott whether he might keep it. The money had been returned.

Mr. Talcott said: “That’s all; what’ll we do with Jim?’ You didn’t know (to Jim) that you were required to report to receiving the money?”

Jim, “No, sir.” He proceeded to say that he had paid $2.25 for keeping of the house at the Armory. His book of rules and regulations were blank about certain things, including the report of money received.

The charge was dismissed.

ERRING POLICEMAN.
Meeting Between Talcott, Klokke, and Sheridan—A Colored Detective Who went in the War Path
The Board of Police Commissioners held a regular meeting yesterday afternoon. Presten, Commissioners Talcott, Sheridan, and Klokke.

Officer James D. Shelton, a colored policeman attached to the Central Station, was arraigned on charges of drunkenness and disorderly conduct, and conduct unbecoming a police officer. The allegations were, in effect, that the accused was intoxicated on the night of the 25th of August, and that, while in that condition, he drove into a buggy on Desplaines street, upsetting the vehicle, and throwing out the occupant. His outrageous conduct attracted the attention of some officers belonging to the Madison Street State Station, and he was arrested and kept in a cell during the night. Justice Scully fined him $10 and costs for the offense.

Shelton denied that he had been intoxicated. All he had drank that day was three glasses of beer. One of these had been imbibed at the North Side Rolling Mills, another on Chicago avenue, and another on Twenty-sixth street.

The case was taken under advisement. 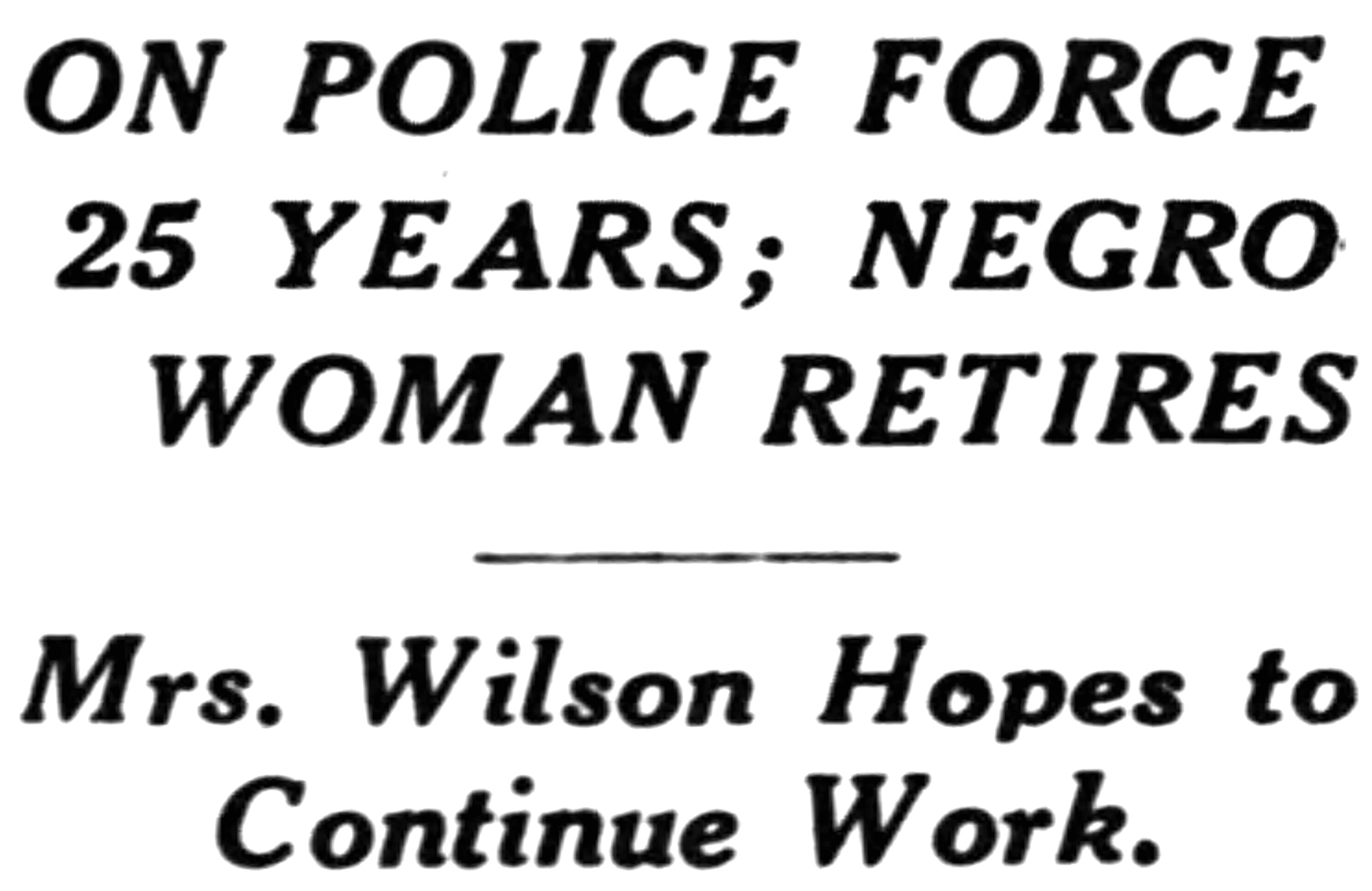 Mrs. Grace Wilson, 63, of 518 Browning avenue, one of the first Negroes in the United States to be appointed a policewoman under civil service, was retired recently from the Chicago police force after almost a quarter century of service. Instead of planning upon a prolonged vacation, Mrs. Wilson hopes to continue similar work after a short rest.

Just missing completion of 25 years of continuous service as policewoman, Mrs. Wilson received her appointment March 28, 1918. She became 63 years old March 9, the age at which city employes are retired.

Took Man from Barricade.
Two credible mentions for efficient work were given Mrs. Wilson, an energetic but rather quiet person. A few months after she became a member of the force she arrested Benny Franklin, wanted for manslaughter, who had barricaded himself in a south side room. The other citation was for ferreting out facts which led to the dissolution of the “Black Knights” gang, a group of young hoodlums who had been robbing south side merchants. She also received medals for marksmanship.

During her career Mrs. Wilson never found it necessary to use her gun, which she carried in a holster at her side.

“Most every one was afraid of woman with a gun,” she explained with a smile. At the time of her appointment policewomen were something of a novelty. There are som 50 policewomen in the city at present.

Used Blow on Jaw.
Her life was by no means dull. Once soon after she went with the force a man, not knowing she was a policewoman, attempted to molest her. Mrs. Wilson struck him a stiff blow in the jaw and arrested him.

Mrs. Wilson was first assigned ton the old Cottage Grove police station, which later became the Pekin station. She remained there until three years ago, when she was transferred to central police headquarters where she has been assigned to the crime prevention bureau.

Before becoming a policewoman, Mrs. Wilson was house mother at the State Training School for Girls at Geneva. She was the first Negro woman to receive such an appointment. Born in Evansville, Ind., Mrs. Wilson attended schools in Evansville and Indianapolis. She came to Chicago in 1899 and later attended the old school of civics and philanthropy. She also did social work and investigations for charitable organizations.

Rears Her Grandniece.
In addition to carrying out her duties as a policewoman, Mrs. Wilson has reared her grandniece, who is now 12 years old. Photography is her hobby.

The first black Chicago police officer, James L. Shelton, was appointed in 1871. Black police officers were not treated equally they were assigned to duty in normal everyday clothes. They were only assigned to work on mainly large black neighborhoods, and they could not arrest any white citizens, and black sergents were not allowed to supervise white officers.