HE most congested and seemingly the most dangerous street crossing in Chicago is one of comparatively few accidents of any kind. Yet at Lake street and Fifth avenue—by far the noisiest corner in down-town Chicago—seventy-five vehicle movements are possible there in 60 seconds, and between 4:30 and 7 o’clock in the afternoon more than 8,000 suburban passengers to the Northwestern Station troop across Lake street when these vehicle movements are greatest. At such time four big police officers are busy with uplifted clubs, and the thunder and squall and jar of the elevated trains overhead make a pandemonium of sound that is almost paralyzing to the comparatively few though passengers who walk down Fifth avenue from the Wells Street Station.

Why is this most congested of corners one of the least productive of accidents?

Several answers have a bearing upon the fact. First of these, the police say, is because the crossing os so congested. Cars, buses, express wagons, trucks, drays, and very other wheeled vehicle except hearses bunch so inextricably there, save for the police, that the movement of each is kept at a comparative snail’s pace.

Again, nine-tenths of the pedestrians who make the Lake street crossing are citizens who are used to it. The crash and roar that are always there are familiar and have no part in making the crossing more dangerous. To the other one-tenth, strange to it, the crossing is so terrifying that appeal is made to the crossing policeman to help the pedestrian cross.

Lastly, the surface trolley cars there pass at right angles.

The horrors of the Fifth avenue and Lake street crossing are all within a space of 50 by 50 feet. Chief of the horrors concentrated there are embodied by the trolley cars moving north and south and east and west over the intersecting double tracks. North and south are the Canal and Twenty-first street cars, the Southport avenue cars, and the Taylor street cars; running east and west are the Division street, Grand avenue, Elston avenue, Ogden avenue, Lake street, and Chicago avenue cars, several of these being of that huge, long type calculated to make the stranger believe that he is experiencing a nightmare. Yet all the types of electric cars, these giant vehicles on a straight track are safest. 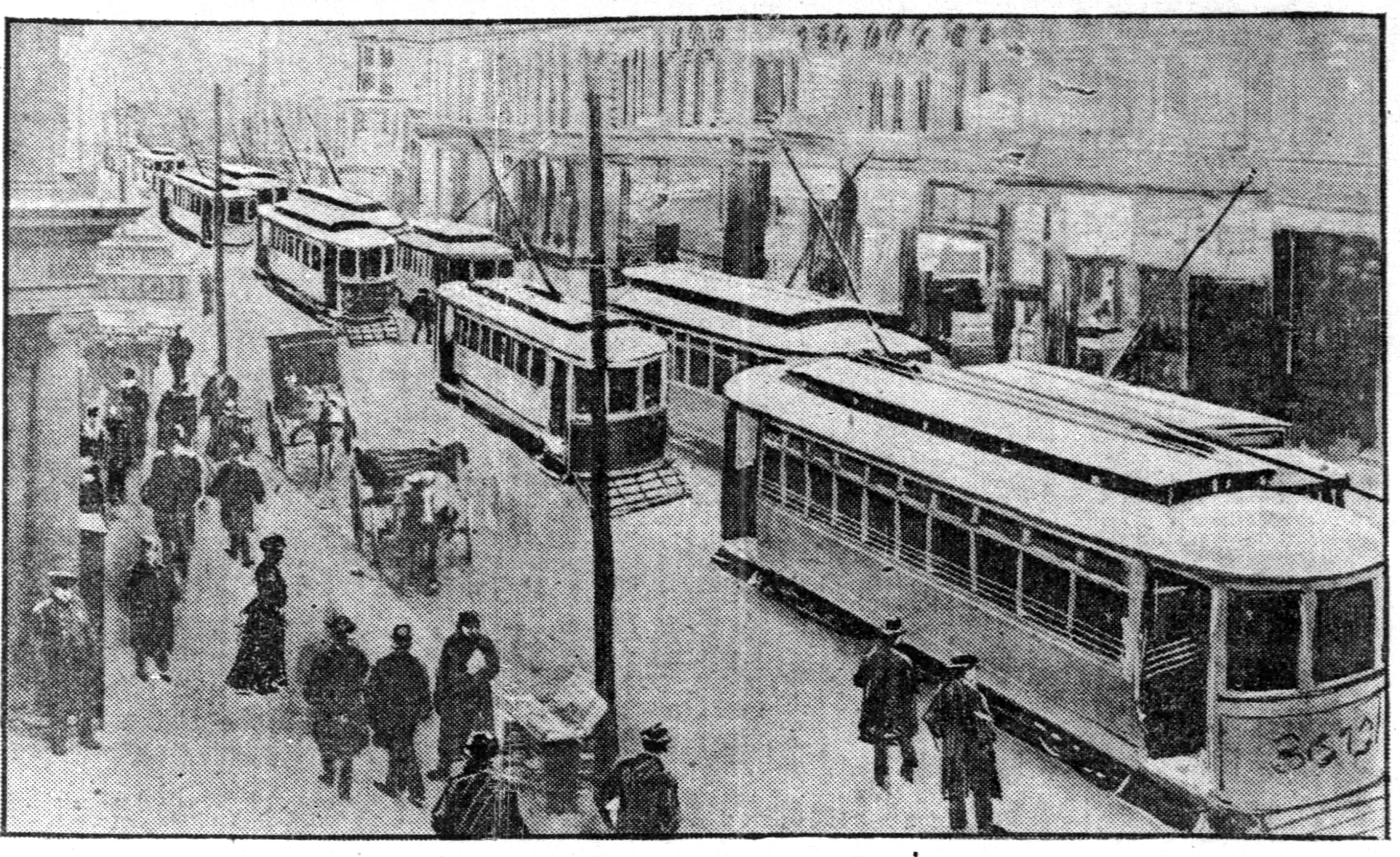 Chicago Tribune, January 29, 1902—The new longer trolley cars being tested to see if they could be run around a loop using Clark street.

At this crossing all through the day and average of four cars a minute pass; in the “rush” hours there may be ten in a minute. Taking the double car tracks and both sides of the streets as many as fifteen vehicles may bunch between two crossings, and as many as seventy-five in a minute may cross Lake street and Fifth avenue.

Traffic past this corner embraces every kind of vehicle driven in Chicago streets. Carriages with monograms on their polished doors are numerous. The Lake street bridge makes Lake street at this point the connecting link between the retail businesses of the West side and the wholesale centers in South Water, Lake, and Randolph streets. Not once in six months, however, does a hearse find its way past these corners.

Every day 10,000 suburban passengers cross the Wells street bridge to and from the Northwestern Station. Probably 8,000 of these walk in Fifth avenue across Lake street. Of the 800 through passengers who come into the station daily, 350 walk over over the Lake street crossing. And these 350 out-of-town visitors give the four crossing policemen more concern than do the other 10,000.

One of the invisible and unexpected dangers of this crossing lies in the fierce drafts that sweep under the electrical structures, which virtually roof these streets at the crossing. No matter from which direction the wind comes, it drives seemingly from all points of the compass into the maelstrom of traffic. Sunlight scarcely touches the pavements here at any season, and in midwinter, when the sun is far southward, Lake street especially is always in deep shadow.

Because of this absence of sunlight and for the reason that the winter winds are so omnipresent, the little squad of officers who man these four corners are accused of having more than their share of colds and distempers of the season. Yet Officers John Malum and William Dyke have stood there for more than seven years, and Officer John McGuire has been there for nearly six years. Officer Thomas J. Maley is there only on temporary duty.

As to troubles, they are few at these crossings. The chief trouble usually comes from some teamster’s harness or wagon breaking down on a car track and in the efforts of a talkative motorman to have him move on in a hurry. Then a job of patching that would equie only two minutes is likely to require ten—unless the cossing policemen arbitrates. 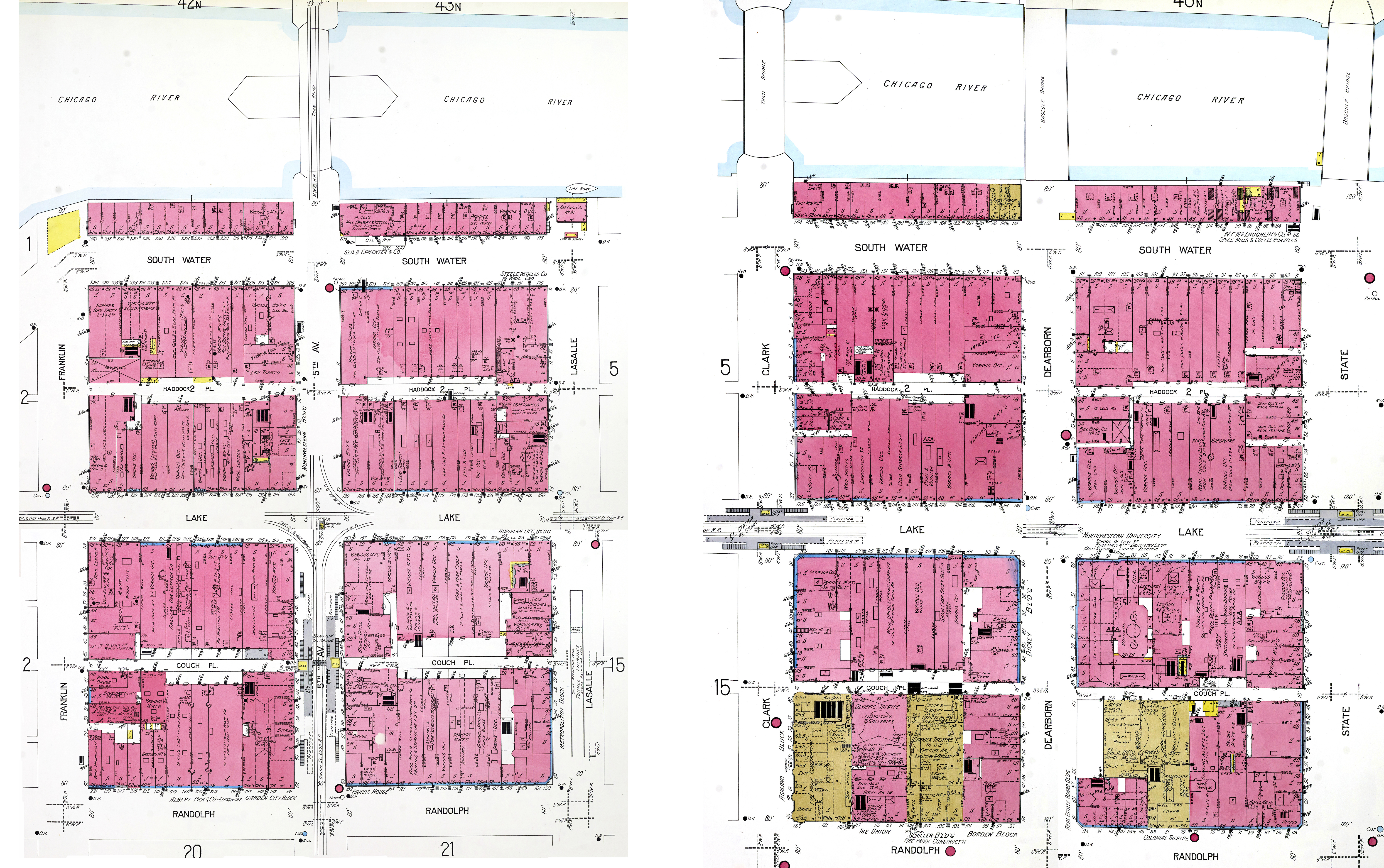 CCORDING to physical design and the emergencies of surface traffic, the most dangerous street crossing in Chicago is at Lake and Dearborn streets. It has not the tremendous volume of pedestrians that affects other down-town crossings, but for the comparative few who walk east and west and north and south at this street intersection the network of street railway trackj there make a death trap that scarcely could be improved in design.

North and south and east and west, at right angles, trolley cars pass and repass and cross and recross, while sharply around the northeast and the southwest corners of the street these cars clank and crunch and grind, often at the rate of ten cars in a minute.

In the rush hours of the evening it is a maelstrom of trolley cars, with gongs hammering in discordant din, with teamsters cracking whips and shouting to carmen, drivers, and pedestrians, and in the midst of the swirl three big policemen catching horses by the bit, seizing men and women by the elbows and hurrying them out of danger, and themselves often escaping truck, cart, or car by mere intuitive action and alertness.

But in spite of the fact that five cars may be clamoring for the crossing in a bunch, while a dozen teamsters also are waiting for the crossing policeman’s signal to cut into a vacant patch of cobblestones, there are no accidents virtually at this crossing. Paradoxically the danger of it has made it safe.

One thing at this corner has been impressed upon every driver and every motorman who makes the crossing. He must go slow. The trolley car especially must come to a dead stop on the near sides of the streets. It must be thoroughly under control and for more than the safety of the man or driver in the street. For with then introduction of the new style trolley long trolley car, the curves to be taken at these corners are doubly difficult. Front and rear platforms of these great coaches swing so far out of the track limits in the turns that a car on the other track ahead must come to a stop ten feet short of the turn in order to avoid a collision. Old style cars have no difficulty in this respect.

One of the 100 new long trolley cars ready to be put into service.

On a turn not only are these long coaches menacing to one another, but the sweep of their platforms is so great that a bystander often is danger of being knocked over by front or rear rails. After making a turn and in coming back on a straight stretch of track, the big trolley car is comparatively innocuous.

“This is our salvation,” said one of the officers on the corner. “If Dearborn street had the vehicles that pass here in Lake street, we would be blockaded all the time. The chief trouble comes in dodging the swing of these big cars. Everything has to look out for them and make room, and when one of these big cars is swinging around a turn, with a street full of vehicles, it virtually stops the traffic in two sides of two streets.”

To teamsters the curved tracks at Dearborn and Lake streets are doubly troublesome. Many a horseshoe catches there in rail grooves and is torn off. Many a horse, with shoes firmly fast, is thrown in a heap, and one of the duties of the crossing men is to sit on the animal’s head while the driver loosens tugs and straps. 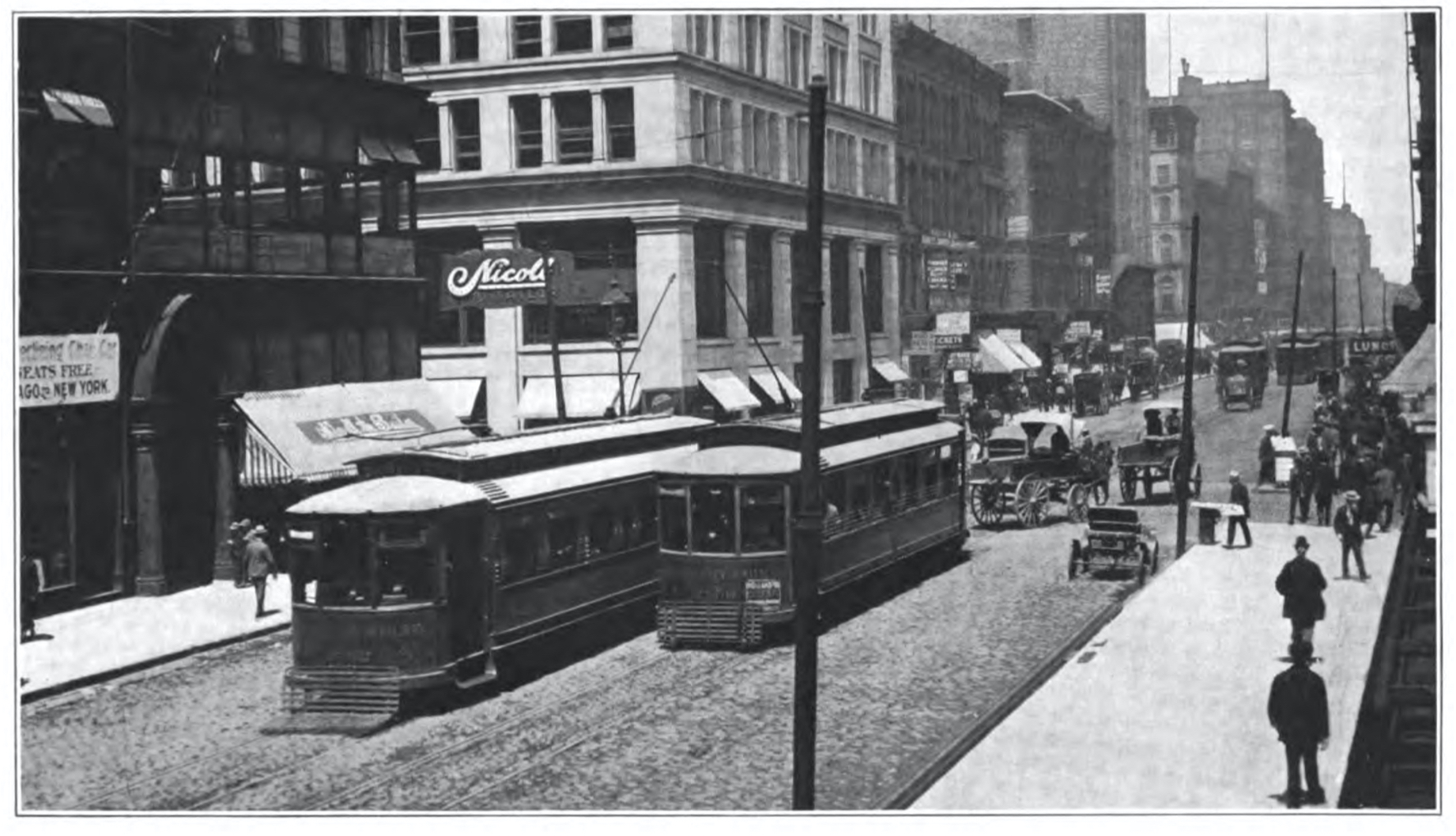 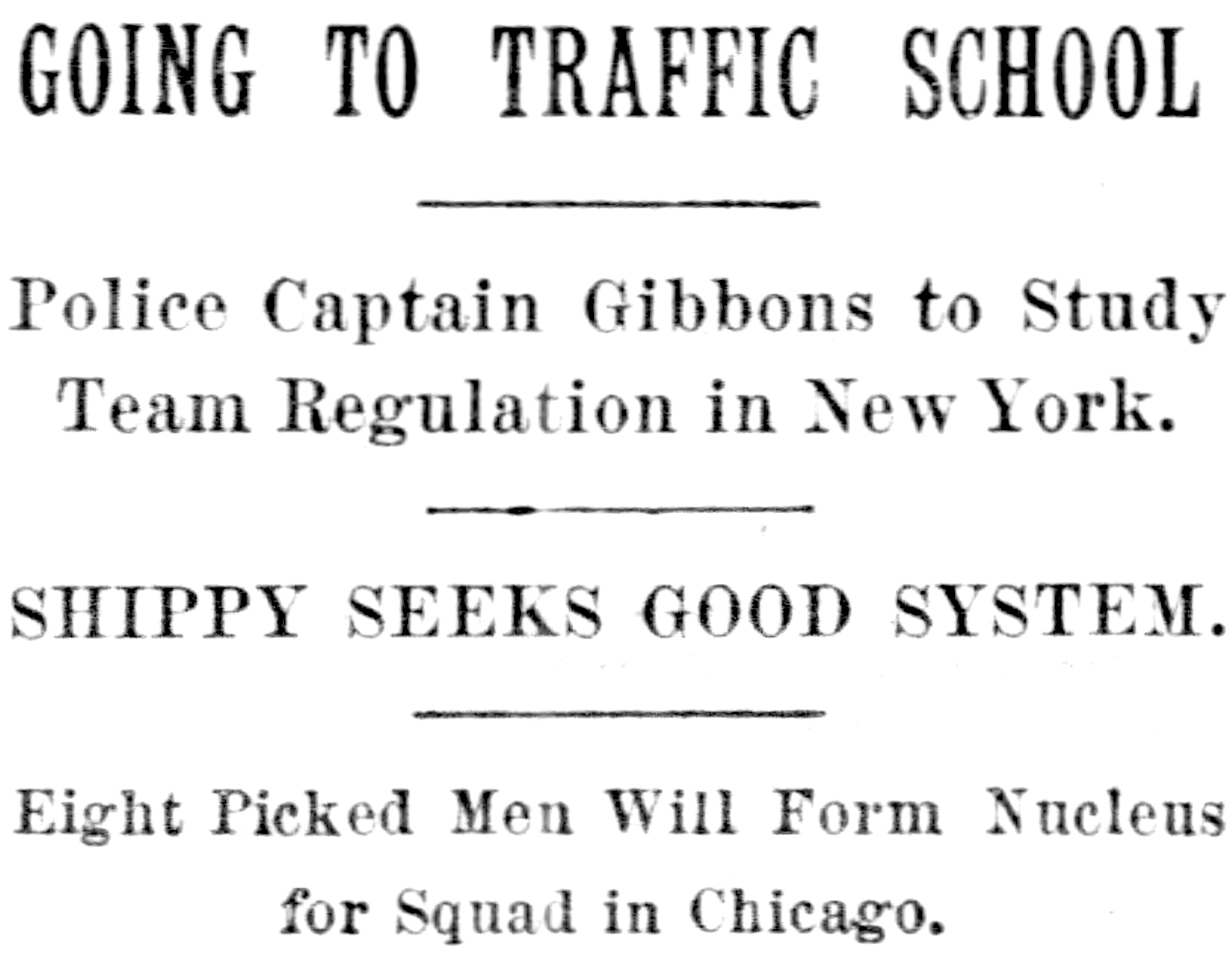 Capt. Gibbons of the Central station, who for many years has been Chicago’s traffic expert, will go to New York this week to get the latest ideas of the traffic policemen there fr the relief of congestion in busy streets.

Possibly eight picked patrolmen will accompany him, for those eight are to be the nucleus of a traffic squad which Capt. Shippy intends shall be as good as anything in that line in this country or abroad.

There has been much improvement in conditions in the loop district, especially during the rush hours, since the crossing policemen have been using whictle signals for the regulation of traffic, but Chief Shippy is not satisfied.

Chief Shippy Explains Plan.
“Capt. Gibbons,” said the chief, “will pick up by personal observation the best ideas of regulating street traffic that can be found in New York.

“We’ll put two policemen at each intersection, say one at Madison and one at State street. When a policeman stands at the crossing that is an indication that the advancing teams are to halt six feet behind the crossing. When the congestion has been relieved at that point he will move obliquely across to the other crossing and stop the advancing teams there. Hs leaving the crosiing is the signal for the teams and street cars to proceed.

To Educate Teamsters Also.
“We will place eight men under the drill of Capt. Stephen O’Brien of New York, who had so much to do with the organization of the system used in that city for the regulation of traffic.

“When you have educated the policemen—and I think it will not take long—we propose to educate the teamsters to stop six feet back of a crossing where they see a policeman standing. The Chicago Association of Commerce, the Team Owners’ association, and other organizations expect to assist us in this respect.”