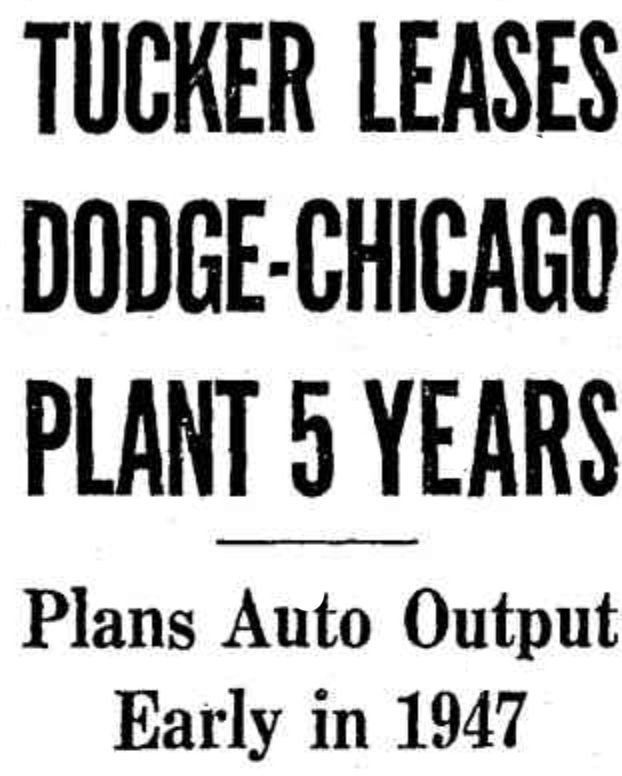 The war assets administration yesterday leased the 170 million dollar Dodge-Chicago war plant to Tucker corporation, a recently-founded business organized to manufacture a new type, low-priced car. The transaction was announced In Washington, D. C., by the WAA and Preston Tucker, president of the corporation.

After the papers were signed Tucker disclosed at a press conference he planned to start production on a four-door lightweight sedan early next year and will turn out 1,500 cars a day when maximum output is reached. He said he has been assured adequate, supplies of steel, aluminum, textiles and parts, and hopes to provide employment for 35,000 persons.

Includes Purchase Option
The transaction, reported earlier in the day by Rep. Kelly (D., Ill.) provides for a five-year lease with two options. The first permits a five-year renewal on expiration of the first period. The second allows the corporation to purchase the plant for 30 million dollars within 4½ years.

The plant Includes 84 acres under roof and is considered suitable for automobile production because it was used for manufacture of aviation engines to power B-29 Super-fortresses in the -war period. The facility was operated by the Chrysler corporation which turned the plant back to the government several months ago. 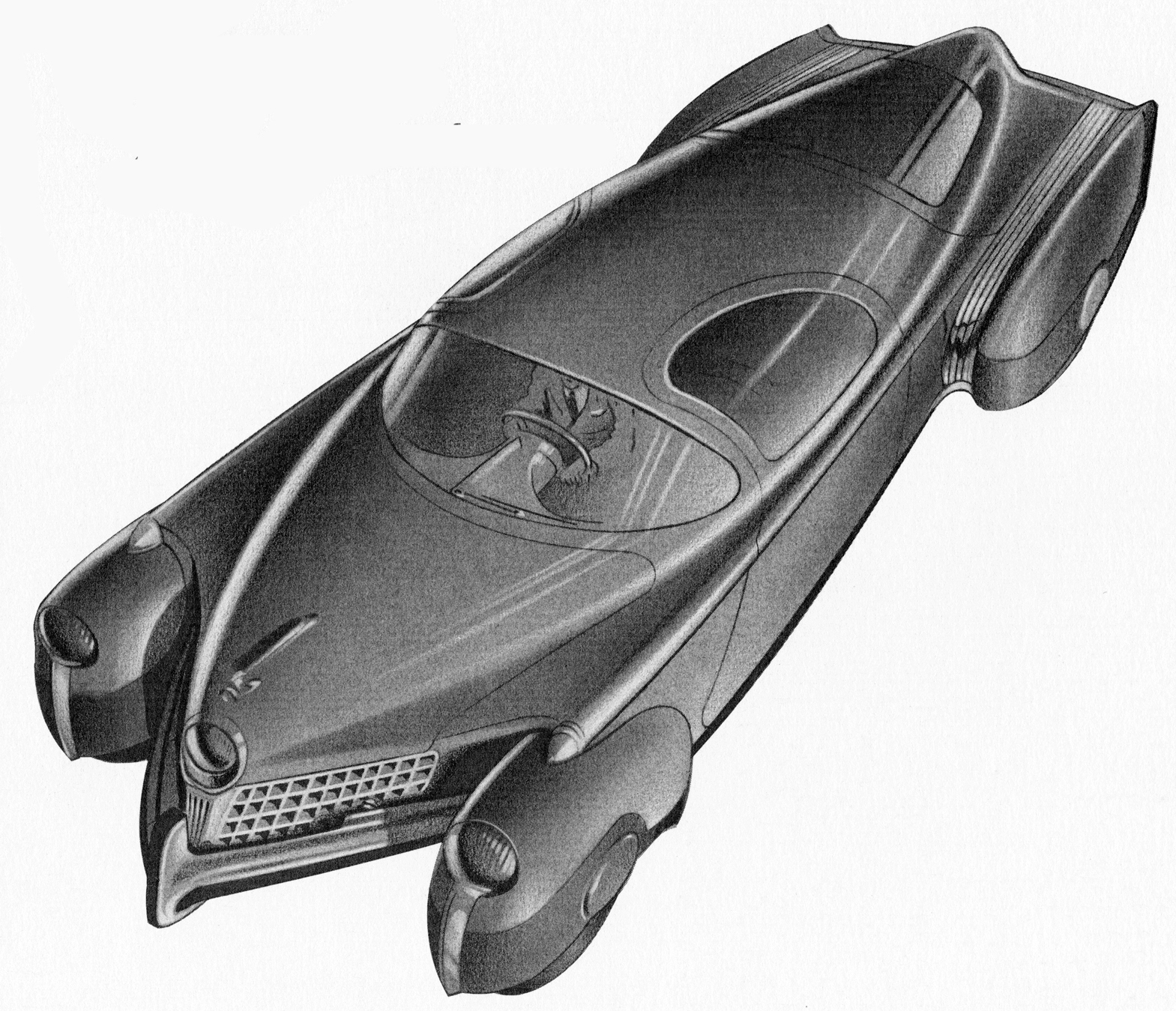 Model of the Tucker automobile. Since model was designed, makers have decided to put steering wheel at left instead of in center.

Rear End Engine, 4 Wheel Drive
The new car is to be called the& Torpedo and differs substantially from present conventional models. Its principal departure from the conventional is a 150 horse power, rear-end engine which imparts power directly to all four wheels instead of two.

It also will have a liquid coupling device similar to the fluid drive of the Chrysler line and the hydra-matic drive of the Oldsmobile and Cadillac. This eliminates the transmission, drive shaft, and differential, saving 600 to 800 pounds in weight. With a body of aluminum and an engine largely of this metal, the over-all weight will be about 2,000 pounds, about 1,000 pounds lighter than comparable models.

Tucker, 42, also heads the Ypsilanti Machine and Tool company which does milling and machining of metals for other companies.

Built Airplane Turrets
In the war period he designed and built power operated turrets for tanks and airplanes and produced a fire control interrupter. 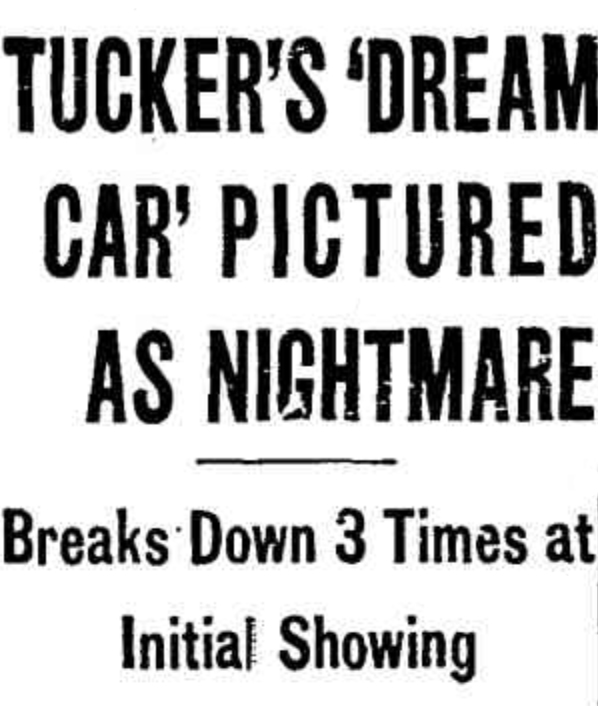 The Tucker “dream car,” unveiled with a brand flourish before thousands at the Tucker plant in June, 1947, had no transmission, no disk brakes, no hydraulic torque converter, and no fuel system. A mechanical hodge podge consisting of reshaped 1942 Oldsmobile body parts, Chrysler fluid couplings. and a half dozen batteries wired in the rear to stimulate the indisposed engine, the car was pushed onto the reviewing stand by six husky plant employes.

This description of the Tucker Torpedo at its widely heralded debut was given by witnesses yesterday before a jury in the federal District court of Judge Walter J. La Buy, where Preston Tucker and seven associates in his ill fated auto company are on trial on charges of mail fraud and conspiracy.

Dream Car a Nightmare
William Stamfli, Tucker corporation s master mechanic until the production shutdown in June, 1948, said the individual wheel suspension apparatus in the first car had to be reinstalled three times the day of the initial showing because of persistent breakdowns. An engine displayed in an open chassis at the. unveiling ceremonies was incomplete with the missing parts, he said.

Carl H. Scheuerman, member of Tucker’s engineering staff, said none of the 36 cars built while he was at the plant had the hydraulic torque converter, disk brakes, or fuel injection system so highly touted by Tucker in his advertising and publicity campaign. The majority had a modified Cord automobile type transmission and a Franklin motor car engine converted from air cooled to water cooled, he testified.

Auto Unable to Reverse
The two Chrysler fluid couplings used on the first car Were removed after the first showing, Scheuerman said. It was explained out of court that the couplings permitted some power to be transmitted to the , but the power could not be adequately regulated without a transmission nor could the car be driven in reverse. One spokesman said that with the couplings the auto was able to make a journey of about 20 feet at the unveiling program. After the couplings were removed, the car could provide none of its own motive power.

Scheuerman told the Jury he saw one hydraulic torque converter in the Tucker plant before he left the company in the summer of 1948, but it was not in a cai. He said Tucker officials met in March, 1948, in an effort to settle their transmission difficulties. They finally decided to abandon the hydraulic torque con- verter idea for the time being and adopt a conventional transmission with standard parts that could be bought from established manufac- turers, he asserted.

Alexander C. Tremilis, the day’s first witness and the man who designed the body style used on the Tucker car actually built, was the one who said the first car was made of reformed body parts from a 1942 Oldsmobile. He said it was started as a metal mock-up, a full size model without mechanical parts. It was later decided to make it an operating car.

Tremulis almost—but not quite—managed to get the plant nickname for the first car, “Tin Goose,” into the trial record. Asst. United Stats Atty. Robert Downing asked him what name the car was known by around the plant.

“Well, unfortunately, it was dubbed the—,” the witness began, but defense attorneys were – ciently prompt with objections to halt the sentence at that point. He filled in the blank with “Tin Goose” out of court. 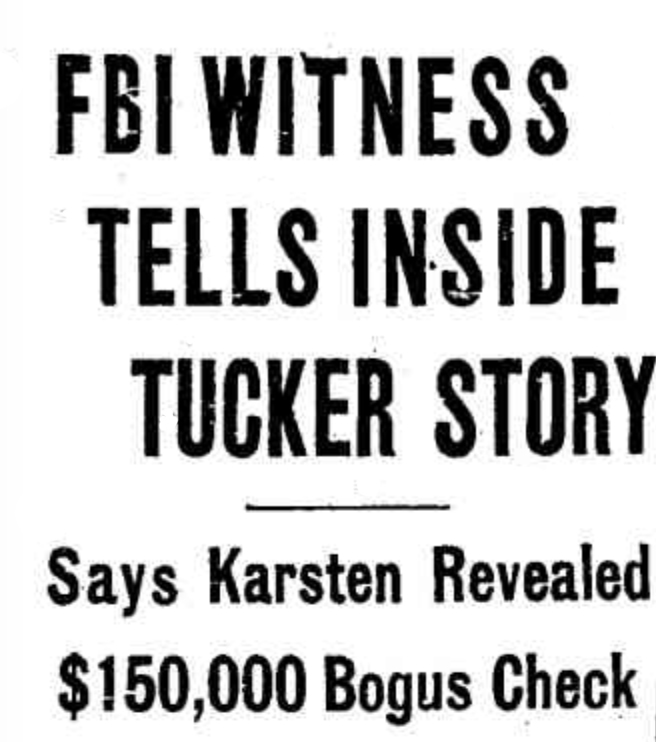 The infant Tucker corporation made a $150,00O down payment to the war assets administration on the immense Dodge-Chicago plant with a rubber check, the jury In the fraud trial of Preston Tucker, and seven present and former associates was told yesterday. The story of the bouncing check was related by William W. Colby, an agent for the federal bureau of investigation. who said he heard it from Harold Karsten, formerly known as Abe Karatz, one of the defendants.

Tucker. Karsten, and the six other men are on trial in the federal District court of Juge Walter J. La Buy on charges of mail fraud and conspiracy in their operation of the Tucker automobile enterprise.

Tells Revelatlons by Karsten
Colby said Karsten, who once served a prison term for conspiracy to embezzle bank funds, told him of the worthless check and made the following other assertions in interviews in Los Angeles a year and a half ago:

1. Karsten took the first steps toward getting the Dodge-Chicago plant and adequate financing for the company, then was banished to California by Tucker and Floyd D. Cerf, another defendant, in an attempt to conceal Karsten’s connection with the venture.

2. Cerf, who handled the sale of Tucker stock, insisted that Karsten change his name to its present form from Karatz (the name under which he had served time in prison).

3. Tucker said he would repay Karsten for services rendered by giving him a California Tucker automobile distributorship under the name of the Southern California Motor company. Until the distrib- was established, Karsten would be paid $2,000 a month in checks drawn on Tucker’s publicity firm. This arrangement was part of the plan to hide Karsten’s ciation with the Tucker program from the public. He left Chicago in February, 1947.

Karsten, who later sued Tucker in an effort to collect for his alleged services, returned to Chicago late in 1947 and registered at the Stevens hotel. At 1 o’clock one morning Tucker and his wife called at Karsten’s room. Tucker told Karsten to get back to California and stay in the background until the securities and exchange commission completed its investigation of the corporation. Tucker gave Karsten $1,000 for traveling expenses.

Rubber Check Sent
Colby quoted Karsten as saying he attended a meeting at the Drake hotel Aug. 1, 1946, at which Tucker, Robert Pierce, another defendant, and others discussed how to make the $150,000 payment due the war assets administration. The corporation did not have that much money. The others finally told Karsten to mail a check for the amount to WAA anyway, tho they knew it would bounce, Colby testified. Karsten said he did not want to do it, but was forced to yield.

Colby’s testimony was given over the strenuous objections of defense attorneys who argued it would he prejudicial to the other defendants. Judge La Buy told the jury the testimony was admissible only as evidence concerning Karsten, not the others. He also cautioned Colby, in the absence of the jury, to avoid mentioning Karsten’s criminal record. Mention of it by another witness Oct. 11 resulted in the government’s first effort to convict the group ending in a mistrial.

In the morning session, James E. Tripp, vice president of the public relations Arm of Russell, Tripp & Neuworth, identified quantities of press releases and other documents used in 1946 and 1947 to publicize the Tucker car and its production program. One such release covered the unveiling of the first Tucker auto at a meeting at the plant attended by 20,000 persons. The program that day reportedly was complicated by collapse of the car to be shown shortly before the scheduled showing.

“Did the program at that meeting go off as scheduled?” asked Asst. States Atty. Robert J. Downing.

“Well—” began Tripp, in an introductory sort of way, but he was immediately cutoff by objections from defense counsel, which were sustained by Judge La Buy.