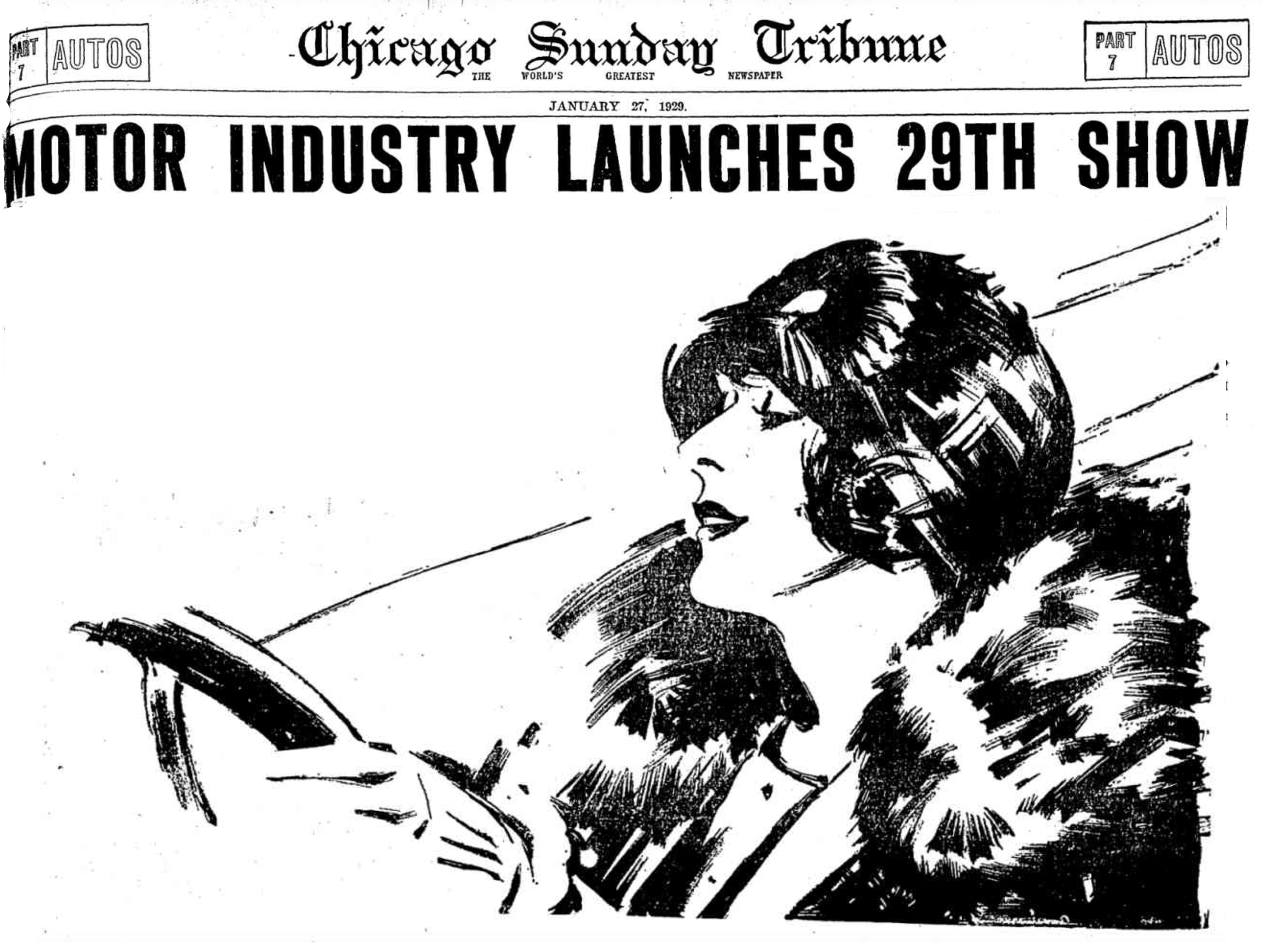 The twenty-ninth national automobile show in Chicago, by far the most magnificent display in the career of motordom, was revealed to the public yesterday afternoon at 2 o’clock, inaugurating seven days of public showing in the historic Coliseum of the 1929 stock in trade of the automotive industry of America.

The fact that this is the show which launches the freely predicted “six million year,” the peak in motor history, naturally lends promise of s peal in exhibition achievements.

That public interest in new models of motor vehicles has grown more intense with succeeding years, and the advancing trend of engineering achievement in vehicle construction was clearly indicated immediately upon the opening of the turnstiles at the various Coliseum entrances.

Crowds Throng Entrances.
Throngs which packed Wabash avenue more densely than ever before were waiting for an hour before the exhibition doors were opened, and for hours afterwards lines of eager patrons moved slowly in. There, in a setting of considerable beauty, made dazzling by numerous large batteries of lights, the 300 new 1929 models of forty-six makes of cars were grouped in comprehensible classifications—the cards of the industry laid face up upon the table.

Today, being Sunday, the Coliseum will remain closed. Starting tomorrow, it will be open to the public from 10 a.m. until midnight, and similar hours will be observed through the week until Saturday midnight. Officials of the show management, basing their estimates upon early indications in other years, conclude that the Chicago attendance will be well over a half million. The attendance at the New York show was something over 200,000. 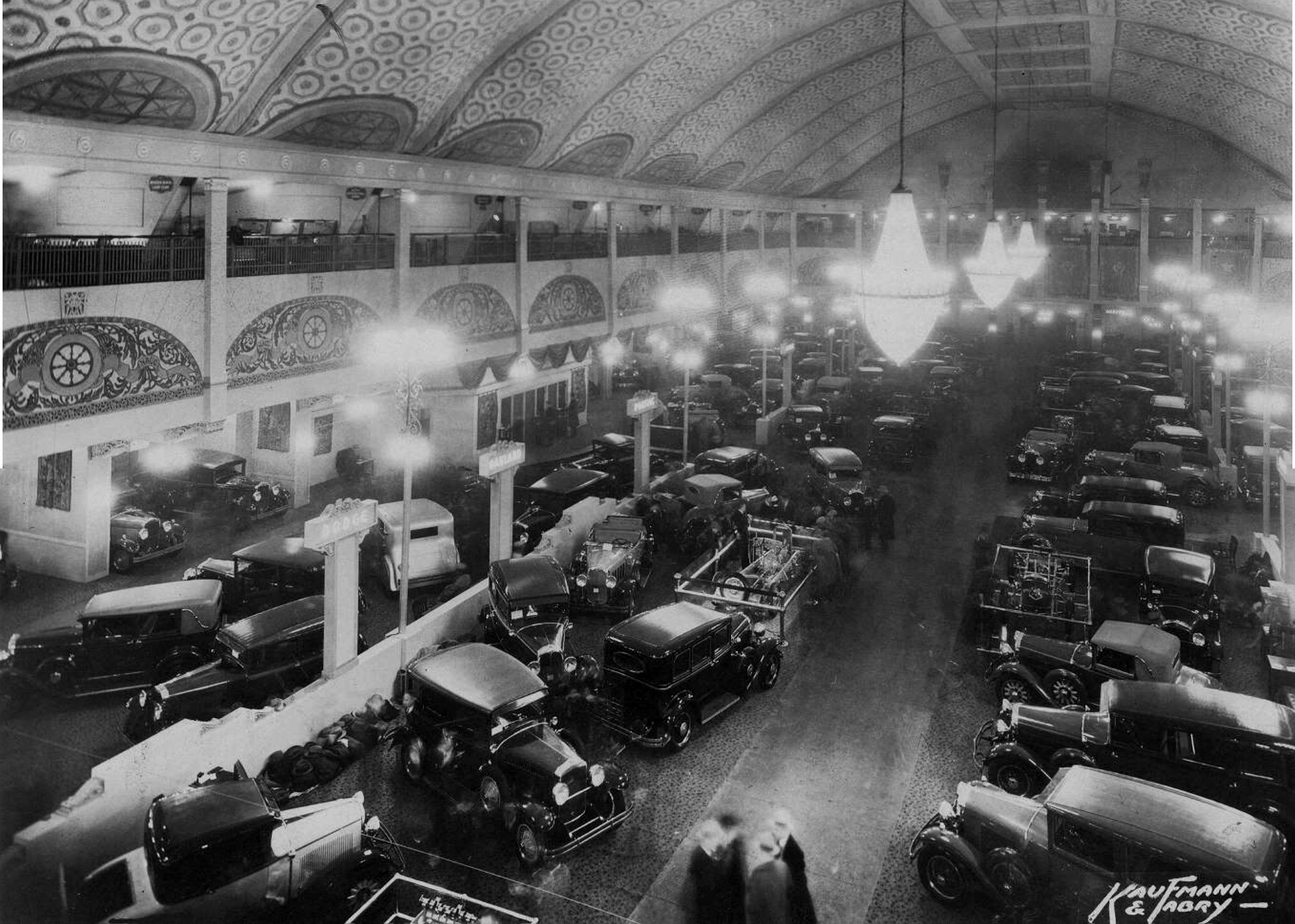 Becomes a Real Show.
Chicago’s national automobile classic is a show in a more literal sense of the word than the New York exhibition. The latter, although built up on lines quite as elaborate, is especially an attraction for the personnel of the automotive industry. The Chicago show is presented by the trade as an exhibition for the public—and in the years of its existence has proved to be such, with tremendous attendance and patronage coming from the entire middle west region.

In the last few years the national shows have been developed more and more into attractions of the real show character. People are attracted to it as na artistic, colorful exhibition of something they are interested in.

Regular motorists are interested in the exhibits as illustrating the latest developments in automotive efficiency and elegance.

Many Go to Buy.
Many of them go to buy—if the improvements they find justify in their minds new cars for old. Thousands of others, however, merely go to see. The whole thing is an entertaining show for them. The cars sell themselves to a certain number of these, of course, and they become the motorists of next year’s show, but even those who, for one reason or another, do not purchase cars are attracted to the show year after year because it is something to see.

This year there is more to see than ever before. The new cars and models outdo their predecessors in beauty of color and design, excellence of performance and ease of riding quality. The cars are there, and any one who will may ascertain their specifications and equipment.

The truth is that the automobile is now in its period of refinement as a vehicle for the transportation of civilized human beings, and each year sees it becoming more and more refined as a thing of beauty and comfort as well as a machine.

Setting One of Style.
The National Automobile Chamber of Commerce, under whose auspices the show is staged, recognizes this. The crude machines of the early days were displayed in virtually bare halls, but the modern motor car requires a setting suited to its style. For this reason the show management has gone further than ever this year in the decoration of the Coliseum, in which the cars are exhibited.

To accomplish his object in the adornment of the building, A. A. Miles, the show manager, called to his assistance a council of experts, including Samuel Asch, director general; Lorenz Kleizer, authority on interior decoration, and Arthur Musson, lighting specialist.

Assurances are already in evidence that the show will be the signal for sales of millions of dollars worth of automobiles. The Chicago exposition is notable for the large orders for motor cars yielded. Interest in new creations from the big plants of the country is active, and every indication is that the public believes its automobile dollar will buy more value, style, safety, quality, and performance this year than at any previous time in the history of the industry. 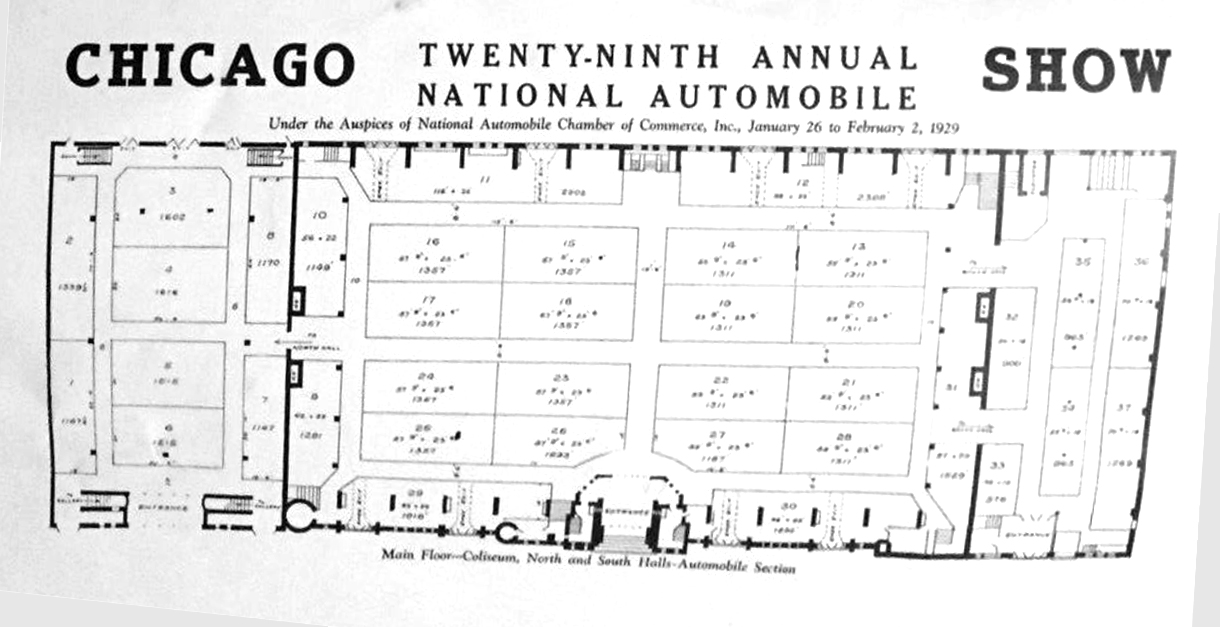 Time: Daily except today until next Saturday evening.

Hours of Show: Monday to Saturday, 10 a.m. to 10:30 p.m. Shop equipment section open to trade until 5 p.m. daily and thereafter until closing to the public.

Exhibits: More than 300 cart and chassis models on display, representing 41 makes; three makes of taxi cabs, 150 of accessories, and 52 of shop equipment. 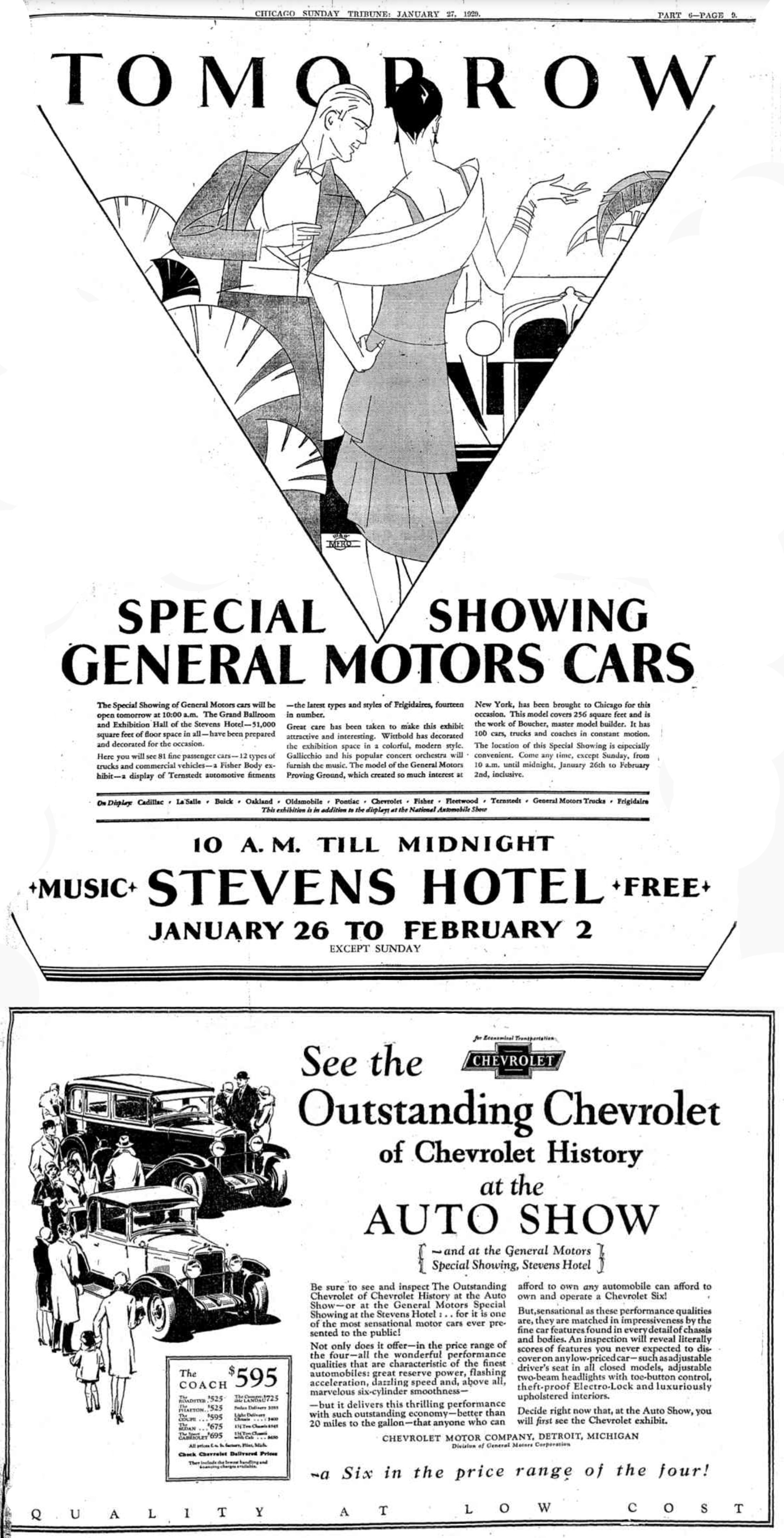 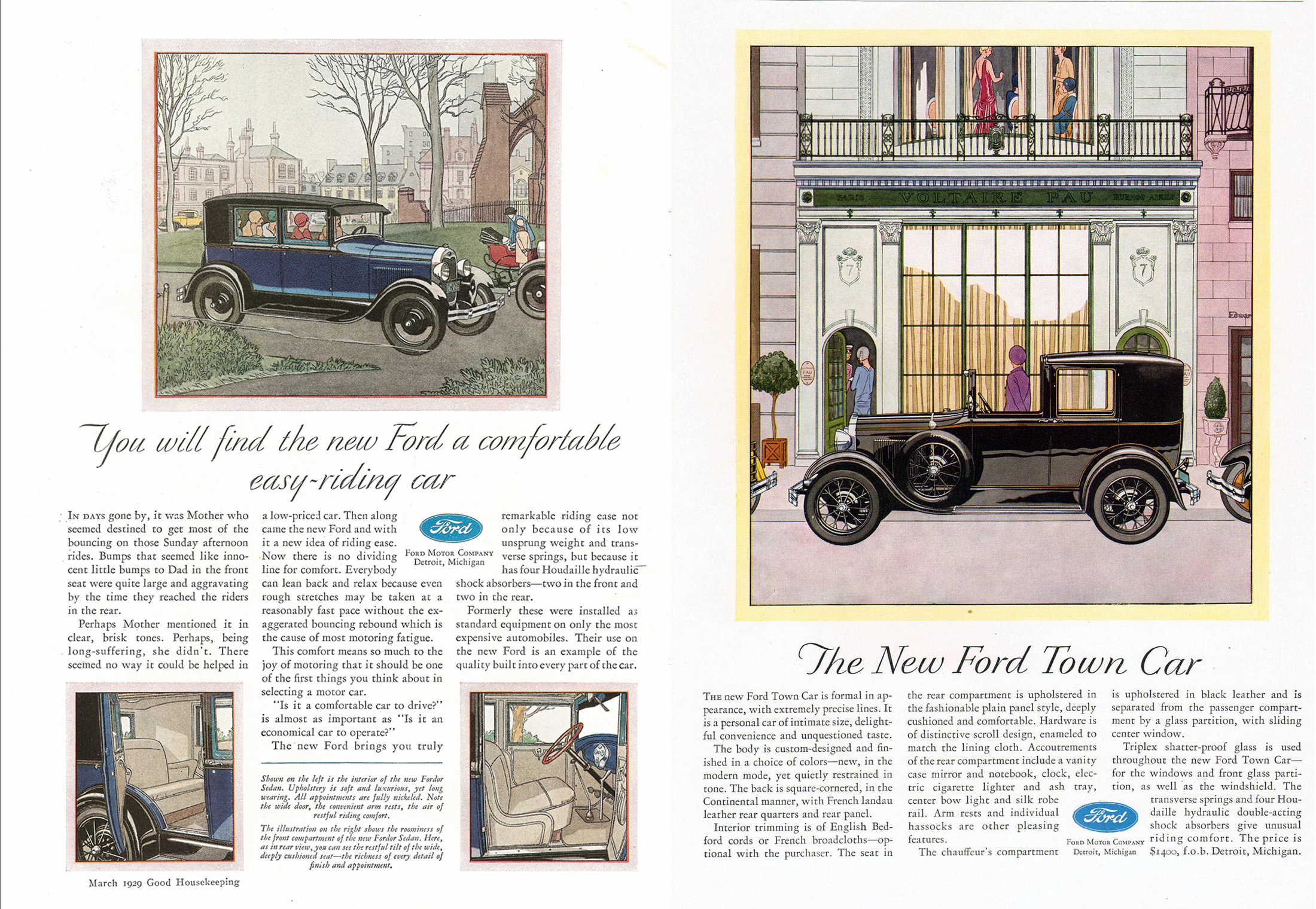