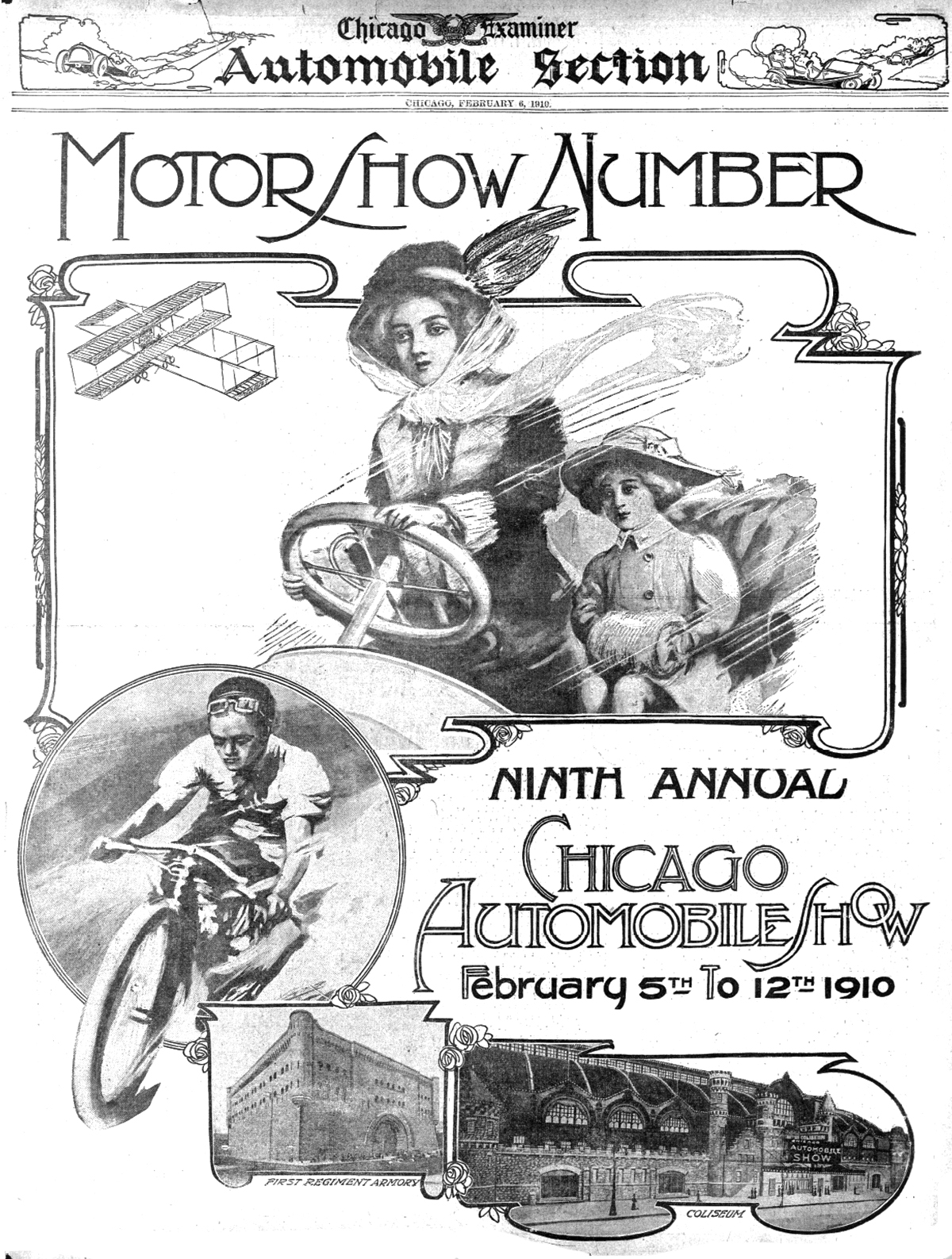 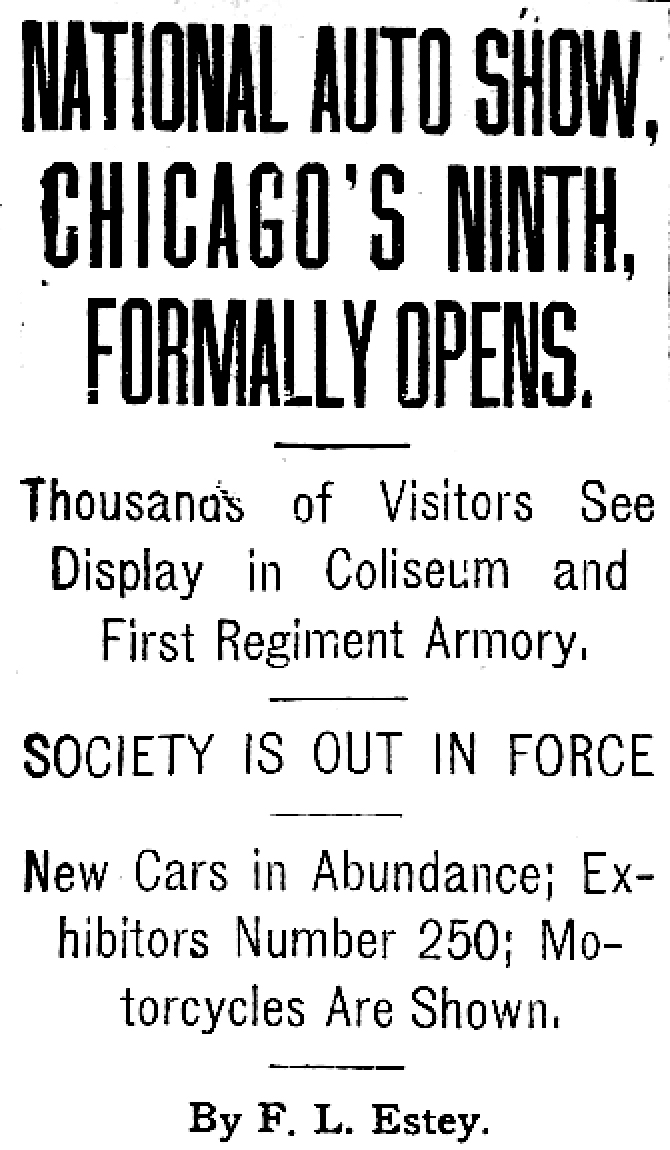 Chicago’s ninth annual automobile show, and the only genuine national show of the year, opened its doors yesterday afternoon. No blare of trumpets or ceremonies marked the opening, for this is a business exposition in its first analysis, and the thousands of visitors who flocked to the two great buildings brought with them on atmosphere of commercial interest indicative on the idea that the automobile now is the nucleus of an industry rather than a game.

To be sure there were present thousands of visitors who have no intention of entering the competition for the sale of motor cars, motorcycles or sundries, but, in the main, these visitors were prospective purchasers of machines. More than that the mechanical wisdom manifested by these visitors shows that the average knowledge of motors is much higher than in the early days of the past decade, when the automobile was regarded as a freak and motorcycling was in the future tense.

Watchword of Show “Business.”
While the watchword of the show is “business,” many visitors, especially the evening throng, came for recreation or for the purpose of discovering who else might be there.

Society always has sanctioned the automobile show, and a liberal exhibition of white shirt fronts vied with the cars for attention of the multitude. Even the tire salesmen inflated their opera hats, and It was a thoughtless representative of an ambitious concern who did not take time to back into his dinner coat.

The display of furs and finery was not the least Interesting feature of the opening evening. Milady was present in com- prehensive numbers, and she manifested remarkable perspicuity in ferreting out the location of cars, the color scheme of which matched her pet theory of adornment.

Quarters Are Crowded.
As usual Manager S. A. Miles and his associate, L. L. Fest, have attempted to crowd the exhibits into the two neighboring and connected buildings, the Coliseum and the First ltegimeut Armory, and as usual they huve uot been entirely successful. There are several private automobile shows being held in salesrooms in the neighborhood. Most of these exhibitors would like to compete for glory and business with the early birds, who engaged the space in the regular show, but they are doing the next best tiling.

A nnmber of the cars shown outside were not even named when the last show, took place in this city, but by next year they will be veterans, so rapid is the development of the industry. At the Detroit show, held a week ago, fourteen new machines made their debut.

The entire number of exhibitors, including automobiles, motorcycles, tires, sundries and accessory concerns, exceeds 350, and every inch of display space has been utilized. Such is the growth of a business no older than the average schoolboy.

The Motorcycle Display.
A feature of the exhibition which should not be overlooked is the motorcycle display in the annex of the Coliseum. This is a branch of the motor industry which has lolled along almost as rapidly as the automobile phase, and now not only demands but receives its full quota of attention. Nearly a score of motorcycle makers exhibit this year, and the time will soon come, say these manufacturers, when they will hold their own show, with or without the approval of the automobile builders.

The “little brother of the auto” is growing husky enough to be independent.

Much has been said in advance relative to the decorations for the show. They are worth it. Manager Miles has conceived a pleasing setting for his exposition, and the decorative principle is the one feature which suggests motoring as a pastime rather than as a business.

Dozens of trees have been so placed that the stroller easily may imagine that he is meandering through leafy dells and other poetical hangouts while waiting for a chauffeur to adjust a tire. The absence of motion on the part of auy of the cars helps out the delusion. 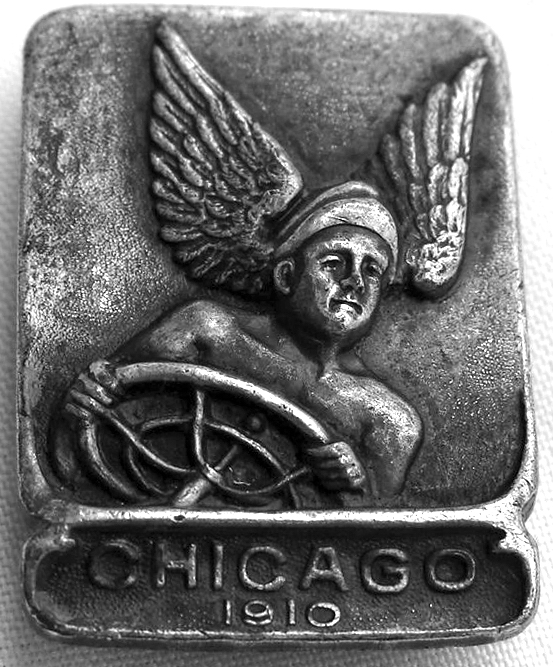 Decorations Are Magnificent.
Superlatives would be useless, of course, In any description of this year’s decorations, for the enterprising publicity promoter never yet has made the mistake of stepping backward in the development of the theory that each year surpasses the one before. Suffice to say that this year’s stage setting is both unique and pleasing. The display of green trees, foliage and flowers will assist in making visitors forget the storm and sleet which uniformly prevails in this part of the world when the annual automobile show is in session.

As for the wealth of exhibits of automobiles, motorcycles and accessories, the visitor is hard to suit who cannot find the merchandise to fit the purpose of the purse. Cars vary in price from less than $400 to more than $10,000. They are painted in any color to lit the fancy, and one may have little or much horsepower, according to how earnestly he may desire to break the speed laws.

Bodies range from tourabo.it and toy tonneau to torpedo but with all the scope of design there still seems to be little ambition to do away with the touring car. Fads may come and freaks may flit, but the old family favorite is as popular as pay day.

In Session All Week.
All the coming week the motor show will be in session and by Saturday night the information relative to 1010 models of automobiles should be scattered where it will do the most good.

Hundreds of cars will be ordered during the week and thousands of prospective buyers will have some idea of the name of the ear which meets the individual or family requirements. On the other ham many a visitor will come’ to the show with a firm conviction in regard to best value for the money and will go away muddled by the multitude of evidence contrary to his pet notion.

That is the fly in the ointment of all trade shows, but one thing is certain, if the visitor examines all the cars he is sure to be a motorist in the near future, and some dealer is threatened with an early order. 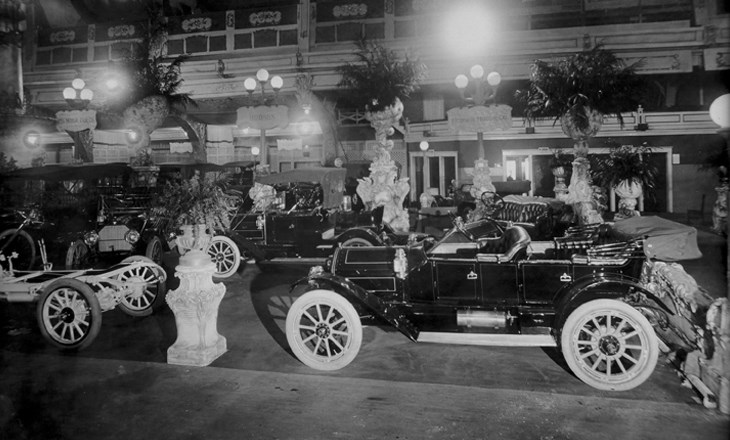 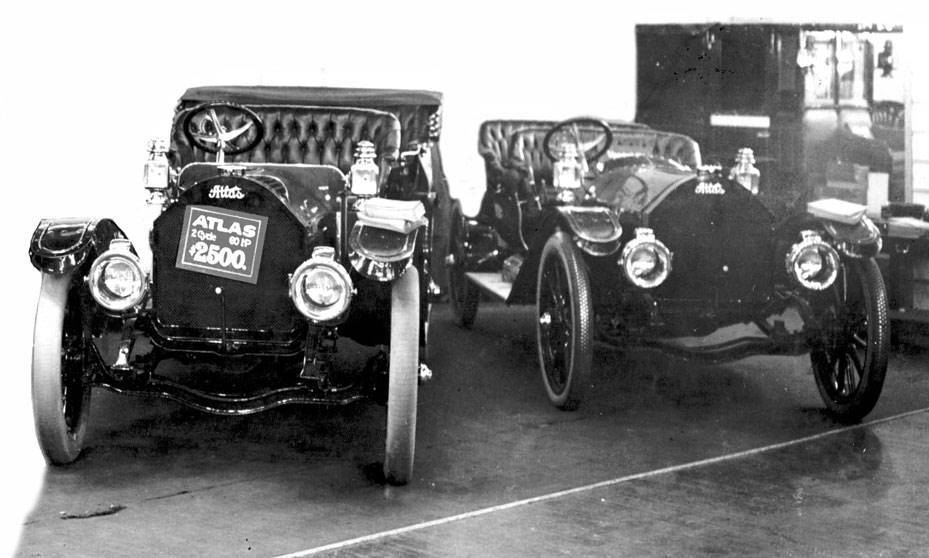 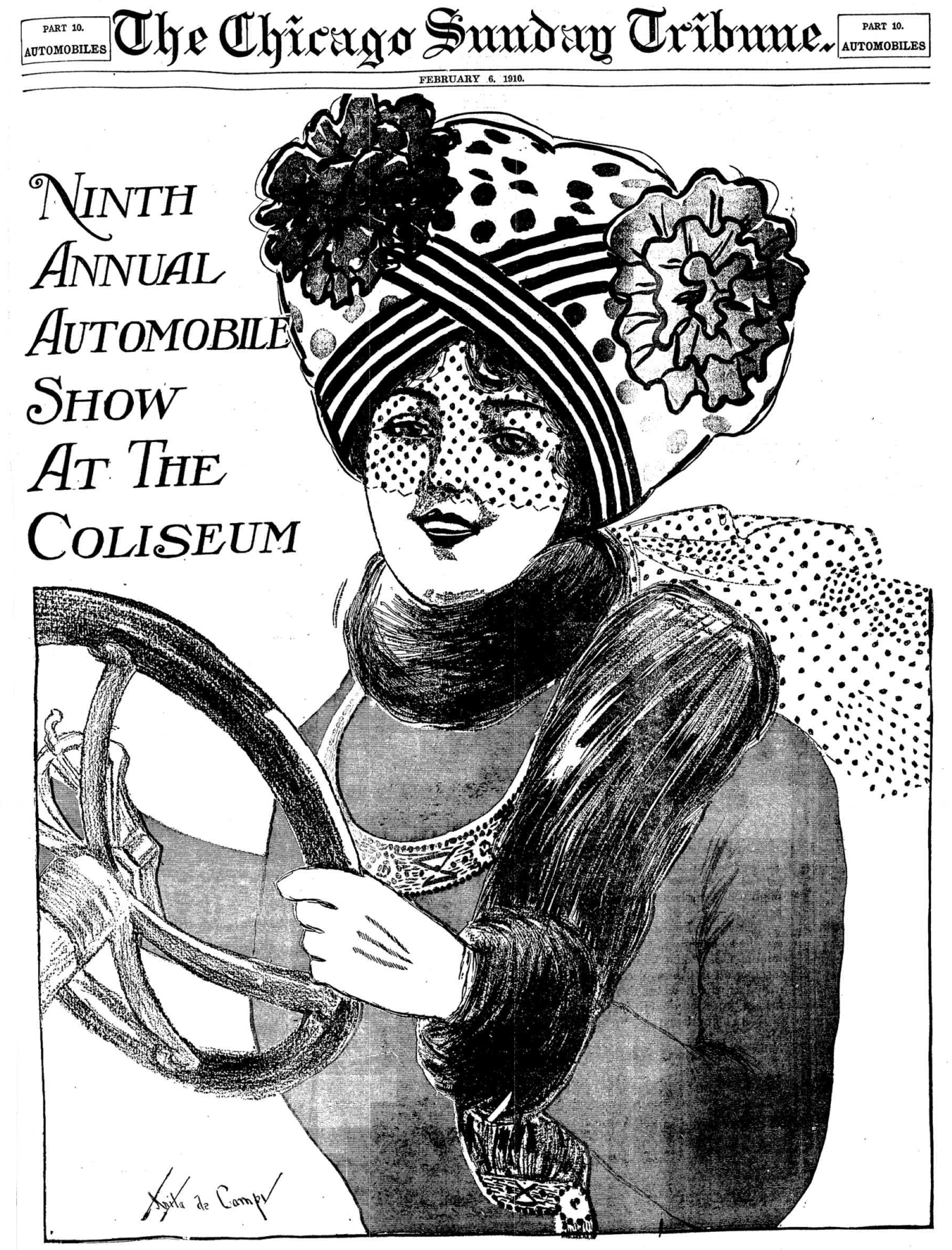 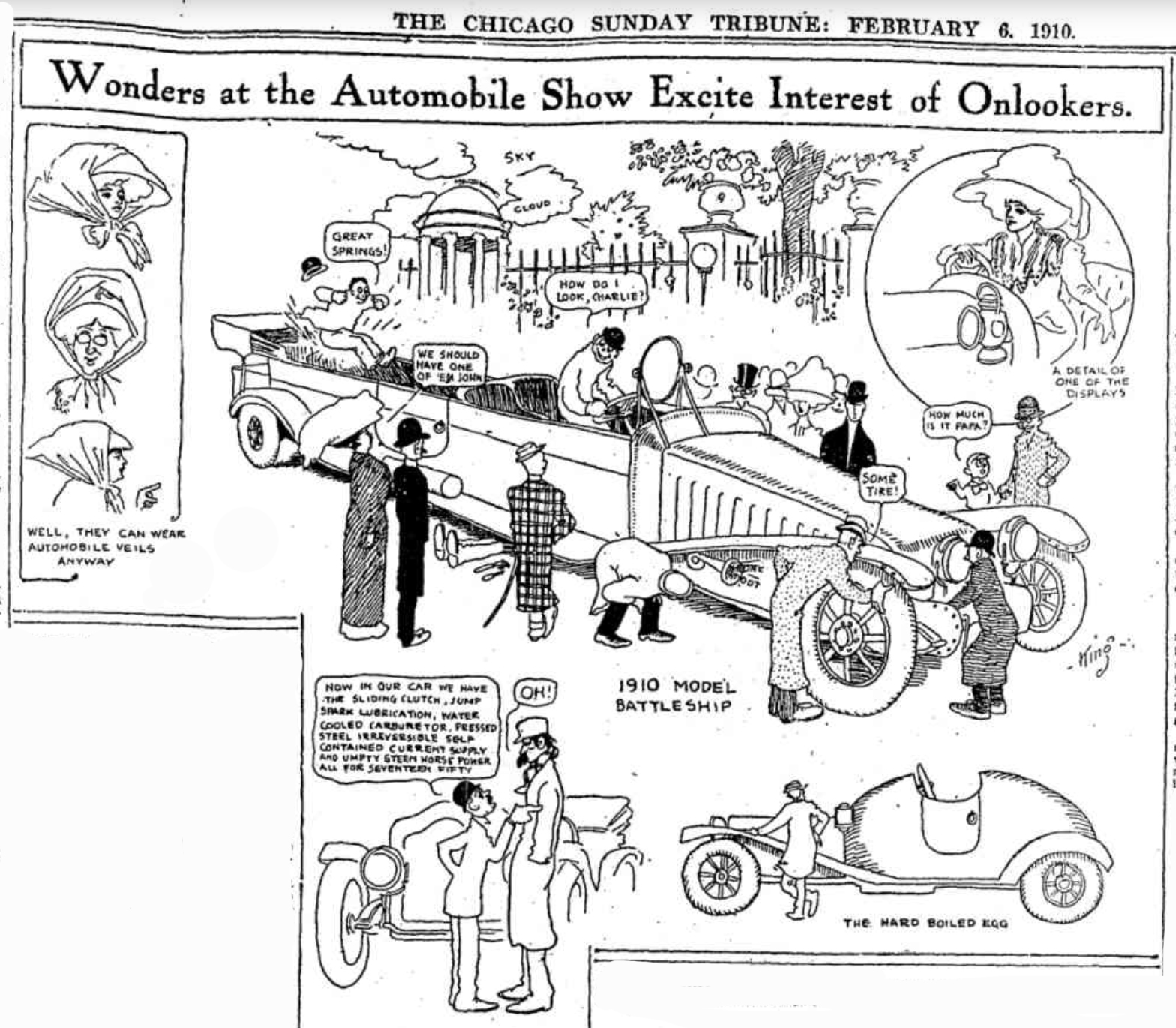 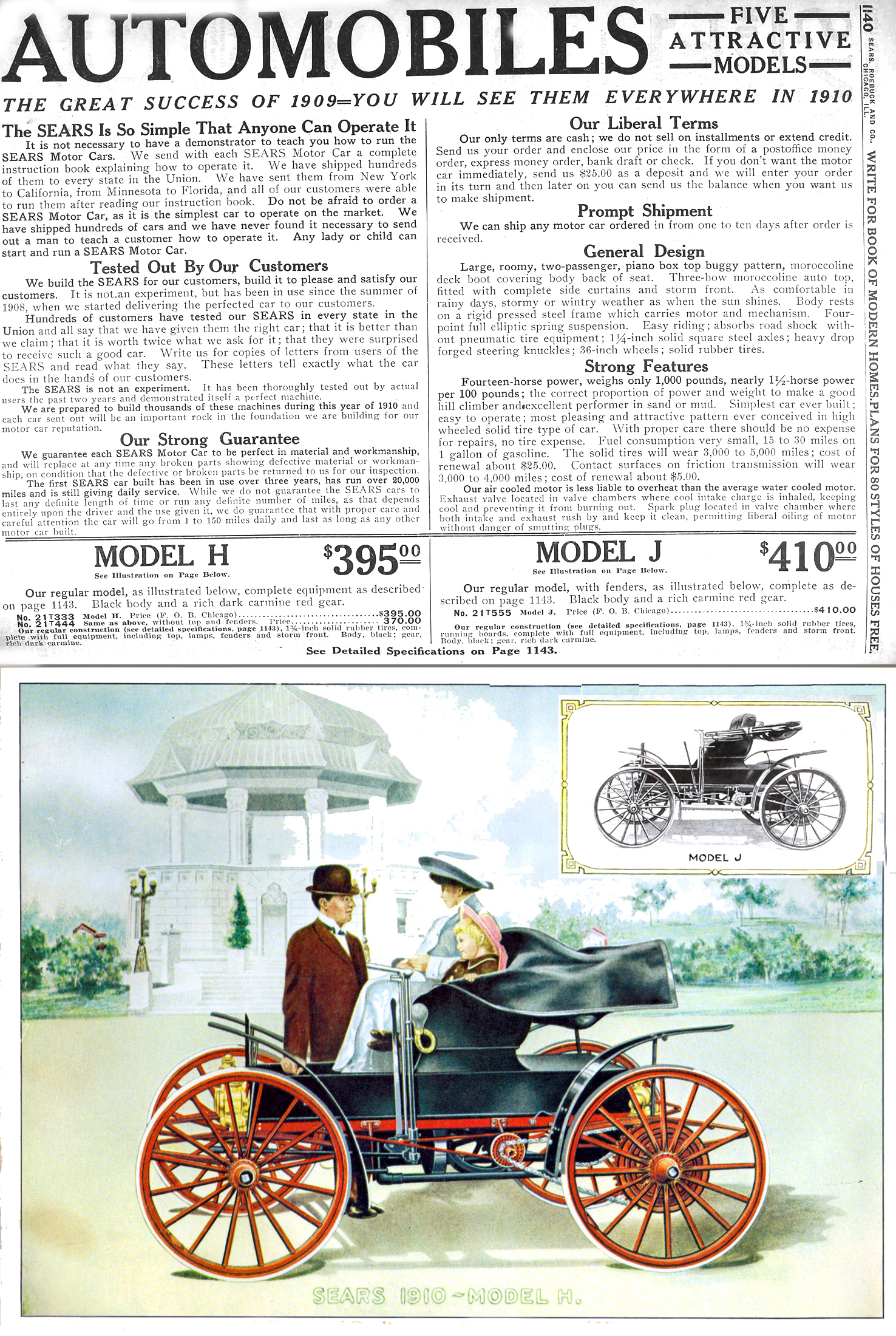 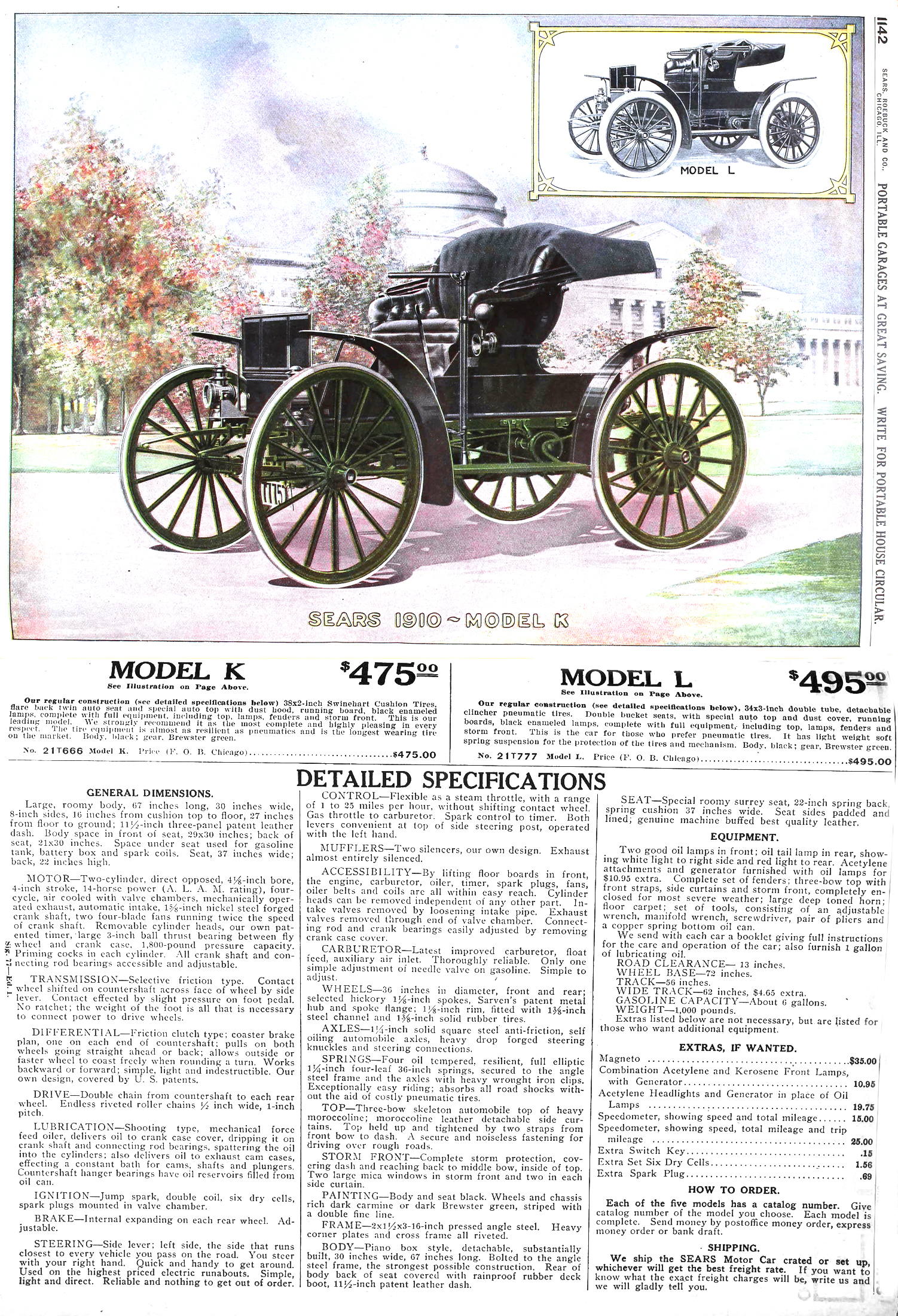 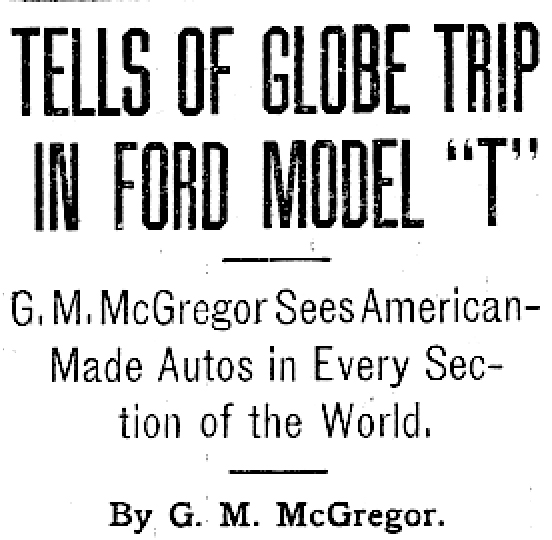 If Henry Ford would only invent a pair of wings suitable for attaching to the Model “T”, round-the-world trips could be made in Fords all the way, and much more comfortable for poor sailors.

In my trip around the world it would have been possible to cover every bit of the land journeys in Ford automobiles. Starting at Walkerville, Ont., through the Canadian Northwest to Vancouver, there wasn’t a siu|gle stop but that I could have located a Ford.

Sailing from Vancouver to Honolulu, the Garden of the Pacific, I spent a day admiring the beauties of the wonderful island from a Ford auto: thanks to Mr. Schumann. Honolulu is celebrated for its wonderful climate, but the greatest attraction to the writer was the surf bathing and collection of wonderful fish in their aquarium, that cannot be duplicated anywhere in the world.

Could Not Interest Chief.
The next stop was Suva, Fiji Islands. I tried to interest some of the native chiefs in Ford autos, but partaking of their hospitality in the shape of cocoanut milk, I was out of business for the balance of the day.

The next stop, Brisbane, Australia, after twenty-three days on shipboard, made me feel very much at home with a Ford runabout at the boat to meet some passengers. Sydney, the next stop, is the headquarters for Fords in Australia. This is a wonderful city, celebrated the world over for its beautiful harbor. The city is very hillv, requiring light weight and plenty of power. That’s why Fords are making good there. All Australians are famous for their hospitality, our agents particularly, and it kept the writer sidetracking invitations of all kinds to attend= to business. The next stop was Auckland, New Zealand.

Almost the first thing I saw in Auckland= was a Ford runabout with two Singer sewing machines starting out for the north end of the island.

There were 26G motor cars at the Melbourne race track, incidentally 115,000 people. Fords were there, but not over 5 per cent of the cars American made. This doesn’t say much for Americans. However, 90 per cent of the Australians are English or English descent, so that they favor goods made “home,” and are very much prejudiced against American manufacturers. The American automobile manufacturer has troubles to overcome, and natural prejudice, but I am glad to say that this condition is slowly but gradually improving. 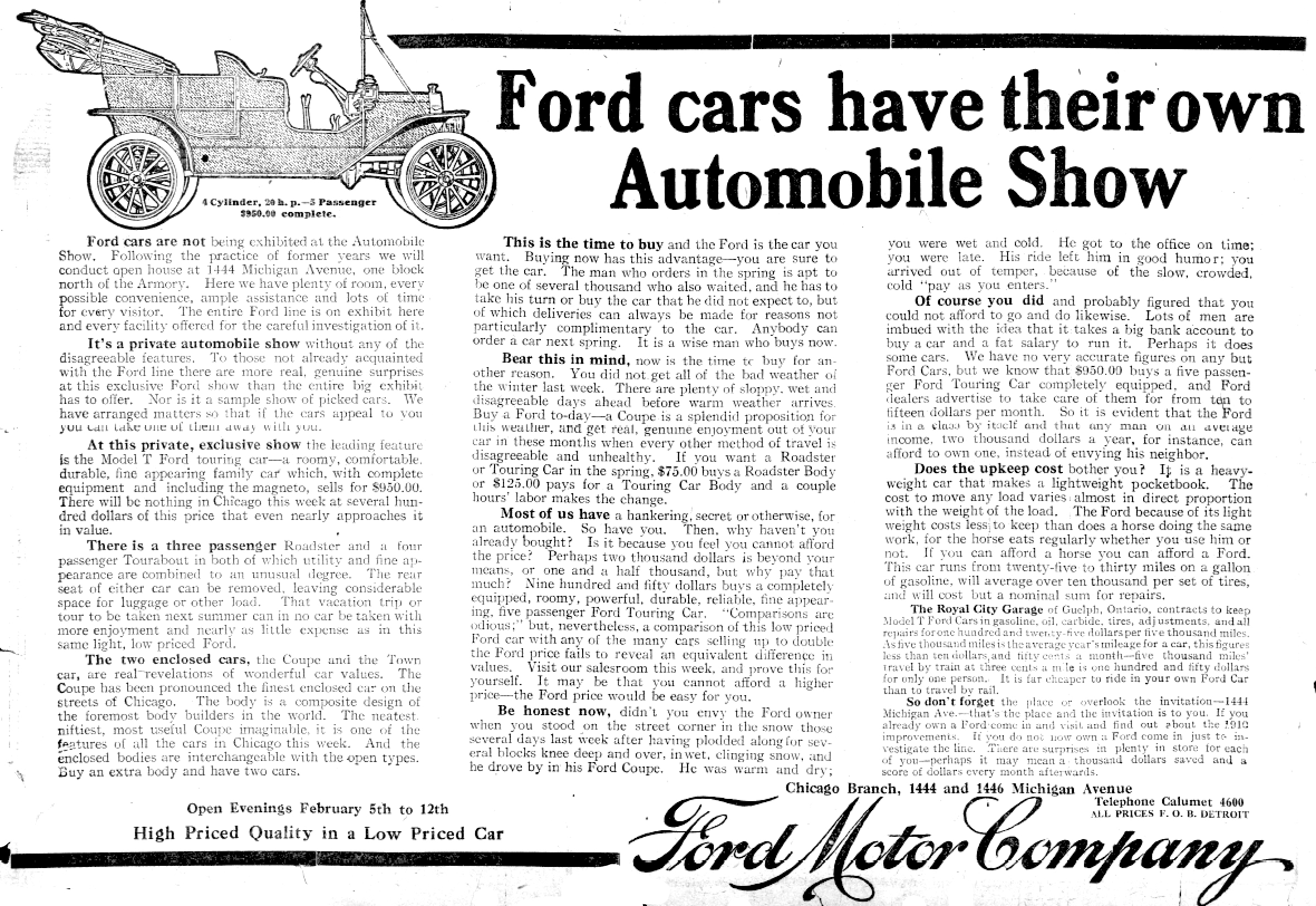 Two Fords Are Unloaded.
I arrived in Adelaide just in time to see them unload two Ford Model “Ts” from the steamer. At Perth Ihad the satisfaction of viewing both Perth and Freemantle from a Ford Model “T,” one of those really red ones that every one looked at.

Here I left Australia and headed for India.

Calcutta was a revelation. They don’t need street cleaners there. Crows, vultures and a few other birds keep the streets clean. Over a million population, and three auto dealers only. The principal occupation there is to take a drive about 4 p. m. to the band concert at the Strand. This I did in a Ford. Any auto owner in India must rivet on his lamps, horns and lock everything loose, as the natives are particularly fond of brass.

I arrived in Bombay the same day as the Model “Ts” from our factory. Saw one unloaded and delivered to a Mr. White while there. Bombay is on the sea coast, consequently the atmosphere is a little more appetizing than some of the other parts of India.

From Bombay I returned to Colombo, and was glad= to get my last bubonic plague passport, and sail for Suez and Port Said en route to Naples.

As I was in a hurry to get home, hurried through Naples, Rome, Turin and landed in on our Paris branch.

London was a grand finale Our new branch there has been a huge success from the start. It seems a shame to have a beautiful showroom like this empty, especially in the middle, of Winter. Perry says he can’t keep anything on the floor, and is spending all he expects to make in cables for more cars.

New York looked mighty good after five months, and better still, there’s is a little spot where they say life is worth living, called Detroit and I don’t know anybody appreciated it more than yours truly. 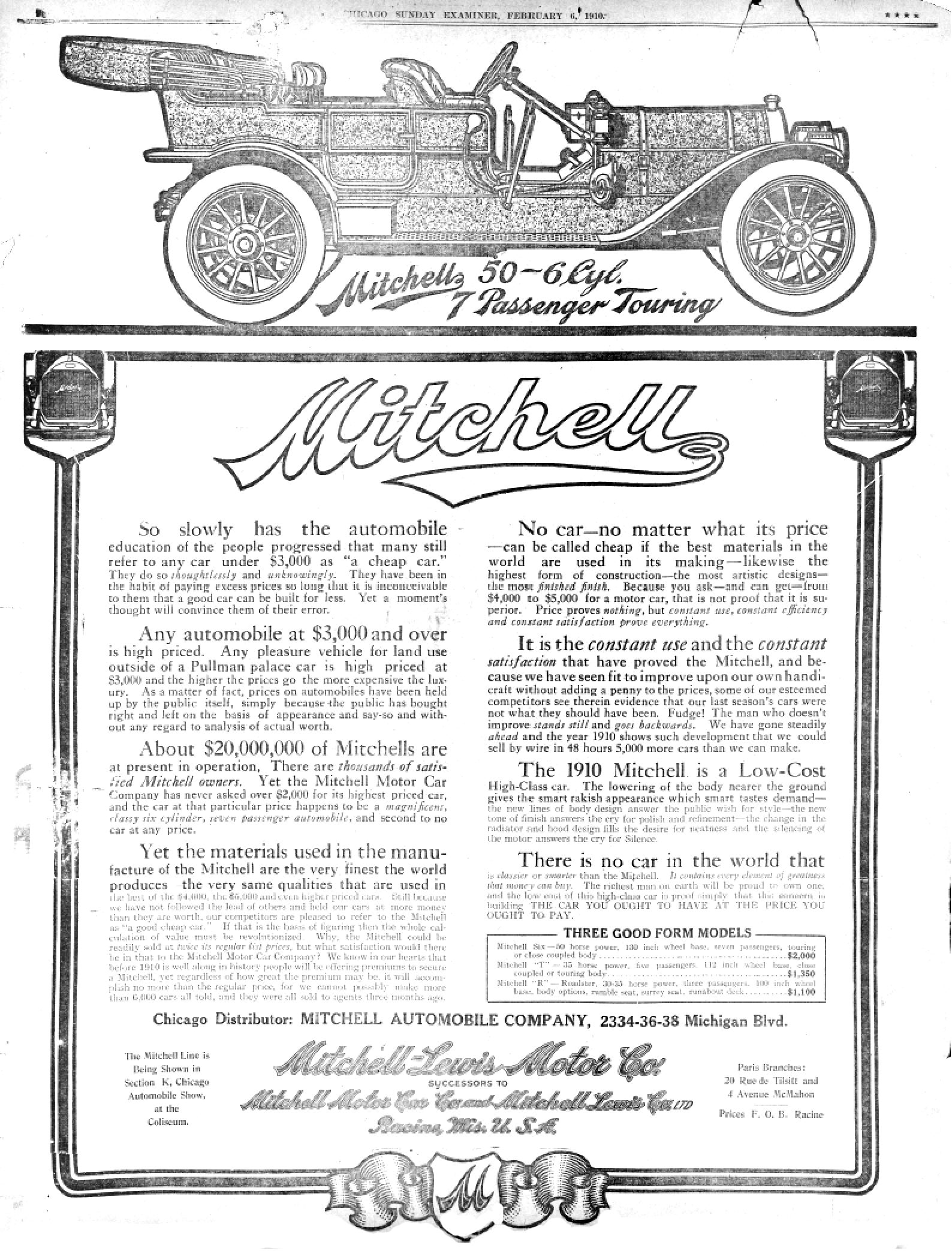