SIRENS, BELLS TO SOUND FOR CITY’S BIRTHDAY
Jubilee Pageant to Be Held Tonight.

Chicago will open today the cele- bration of its hundredth birthday as a city. For more than seven months—until Oct. 9—the city will observe its Charter Jubilee, recalling a chronicle of achievement in the march from a frontier outpost to a world metropolis.

Today has been proclaimed Charter day by Mayor Kelly, commemorating the centennial of the granting of the city’s charter by the state legislature on March 4, 1837. The day will be a salute of sound.

Consular Corps to Parade.
During the morning there will be a parade of Chicago’s consular corps, preceded by the Black Horse troop, from the Drake hotel to the city hall. The foreign consuls and their attaches will motor south in Michigan avenue to Randolph street, then west to State street, south to Jackson boulevard, west to La Salle street and north to the city hall. There the for- eign governments, through their rep- resentatives, will present congratula. tions to the city and the mayor.

At 11:45 a. m. the scene of activity moves to the Chicago Historical So- ciety building in Lincoln park, where Mayor Kelly, as honorary chairman of the jubilee, and his party will be met by representatives of the Allied War Veterans. The group will be greeted by officials of the historical society and will be escorted into the building past a guard of honor. 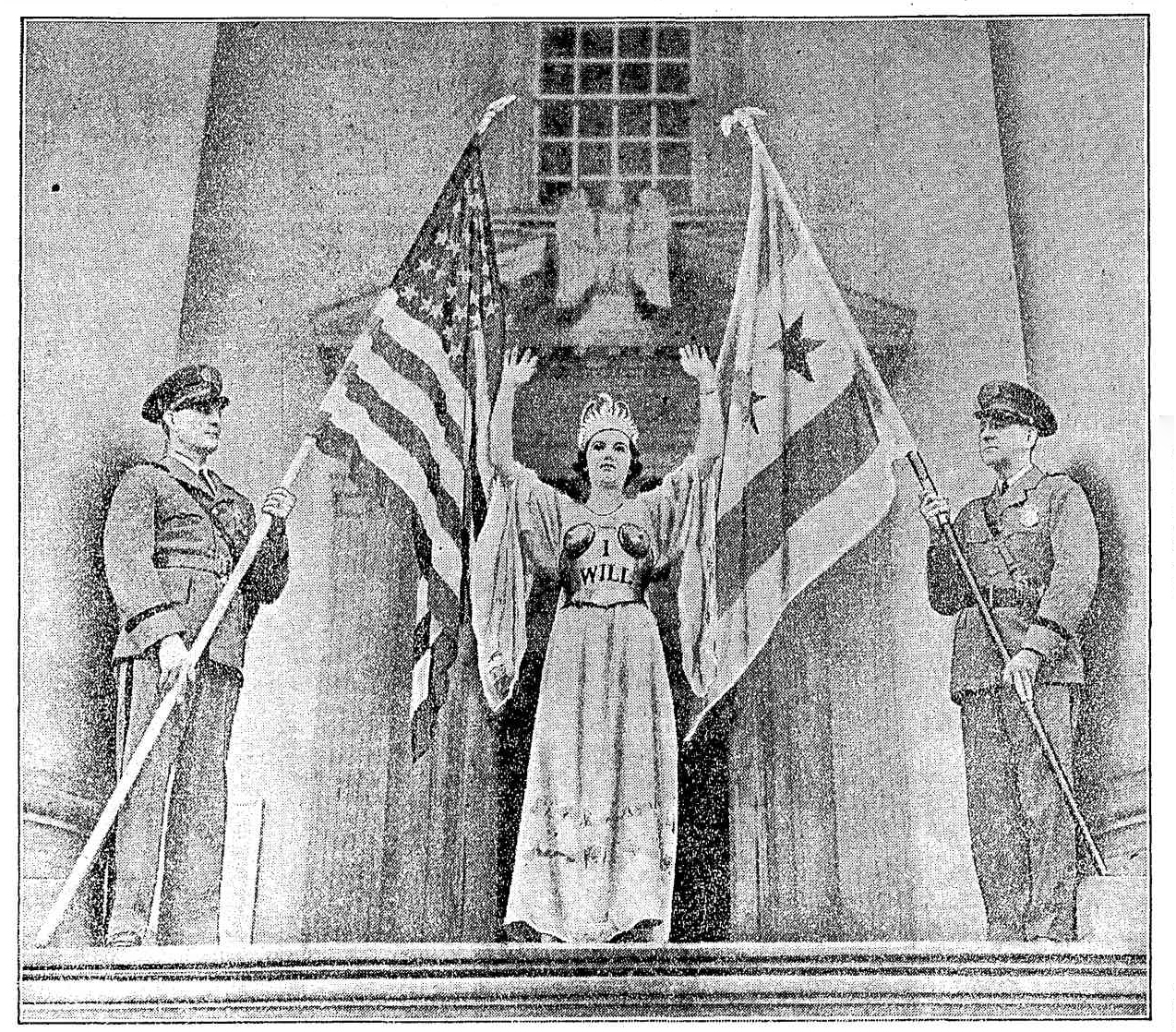 Symbolic of Chicago’s jubilee celebration opening today is this picture made yesterday at the Chicago Historical society, which will be one of focal points in events of day. Miss Lorraine Ingalls, the “I Will” girl picked as queen of the charter jubilee, is between two guards, the one at the left holding the American flag and the one at the right the official Chicago flag. The official signal for the opening of the celebration will be given at the historical society by Mayor Kelly when he strikes the gavel used by city’s first mayor, William B. Ogden, in calling council to order 100 years ago.

Official Opening at Noon.
Promptly at noon the mayor will strike the gavel used by Chicago’s first mayor, William B. Ogden, in convening the first meeting of a Chi- cago council one hundred years ago.

The old brass cannon in the Fort Dearborn replica on the lake front in Burnham park will fire a salute. This will be echoed 98 times by a battery of the 122d field artillery, Illinois National Guard. The old can- non will fire the hundredth shot.

Then railroads and factories will loose their whistles, church be rung, boat and horns and sirens will sound. This tribute of sound will last for about a minute. The mayor then will make a three minute broadcast, which will be carried by W-G.N.

War Dead to Be Honored.
Other brief addresses will follow at the historical institute and the mayor will place a wreath on the Golden Book of Cook county, in which are commemorated the county s war dead.

At 3 p. m. the mayor will put into place, at State and Madison streets, the first of 16,862 street signs intend- ed to make Chicago’s 1,363 thorough- fares the best marked in the world. State street will celebrate the jubilee with light standards and banners.

A jubilee spectacle will begin in the Chicago Stadium at 8:30 p. in., with more than 20,000 expected to at- tend. A pageant in which a thou- sand persons will participate will depict the coming of peoples from foreign lands and their molding into Chicago citizens,

Musical Artists to Appear.
Among the artists who will partici- pate in the second half of the pro- gram are Betty Jaynes, 16 year old opera singer; Gertrude Niesen and Ethel Shutta, night club entertain- ers, and a high school jubilee chorus vf 300 voices. There also will be music by a high school jubilee band of 300 pieces and the University, of Illinois band. The university band and the Glee club of the Chicago professional schools of the university will give a concert at 3:30 p. m. today in the Auditorium theater.

Charter day programs will be held during the day in schools and in fieldhouses of the Chicago park dis- trict. The city hall will be closed today in observance of the centennial.

WILLIAM B. OGDEN, first mayor of Chicago. Born in Walton, N. Y., in 1805, he came here in 1834 to establish land trust agency. Was prominent in management of several railway lines and died in 1877. He was a Democrat aril eloquent speaker capable of swaying an audience to his will.

GORDON S. HUBBARD, pioneer and Indian trader. Born in Vermont in 1802. In 1827 he established several trading posts in Illinois including Chicago. He served in the Black Hawk and Winnebago wars and served in the state legislature. He supported Lincoln in campaign of 1860.

ARTHUR G. BURLEY, pioneer merchant. Born in New Hampshire in 1812, he was employed in boot store of Tohn Holbrook upon arrival here in 1835, then accepted position with half brother, Stephen F. Gale, as proprietor of first book store in Chicago. He later was in the crockery business. I

JOHN H. KINZIE, Indian agent. He acted as counselor in handling of Indian uprisings in 1812 and accompanied white troops to attempt peace with red men prior to Fort Dearborn massacre. He was twice married and his daughter-in-law, Mrs. John H. Kinzic, achieved literary distinction.

LEVI D. BOONE, distant relative of Daniel Boone. Settled in Chicago in 1836 and entered the practice of medicine. Was head of several medical societies before quitting practice to enter publish- ing and insurance businesses. He was elected mayor on the Know Nothing ticket in 1855.

FERNANDO JONES, real estate operator and abstractor of titles. When public records were destroyed in the Chicago fire his set of ab, hoarded in a fireproof vault. became the only means of showing title to property. Married Jane Graham, prominent suffrage leader of civil war days.

JOHN WENTWORTH, journalist and congressman. Born in New Hampshire in 1815, he came to Chicago in 1836 and edited The Chicago Democrat, previously published by John Calhoun. He became proprietor of the Democrat, 1 merged with the Chicago Tribune in 1864. Was also mayor of city. 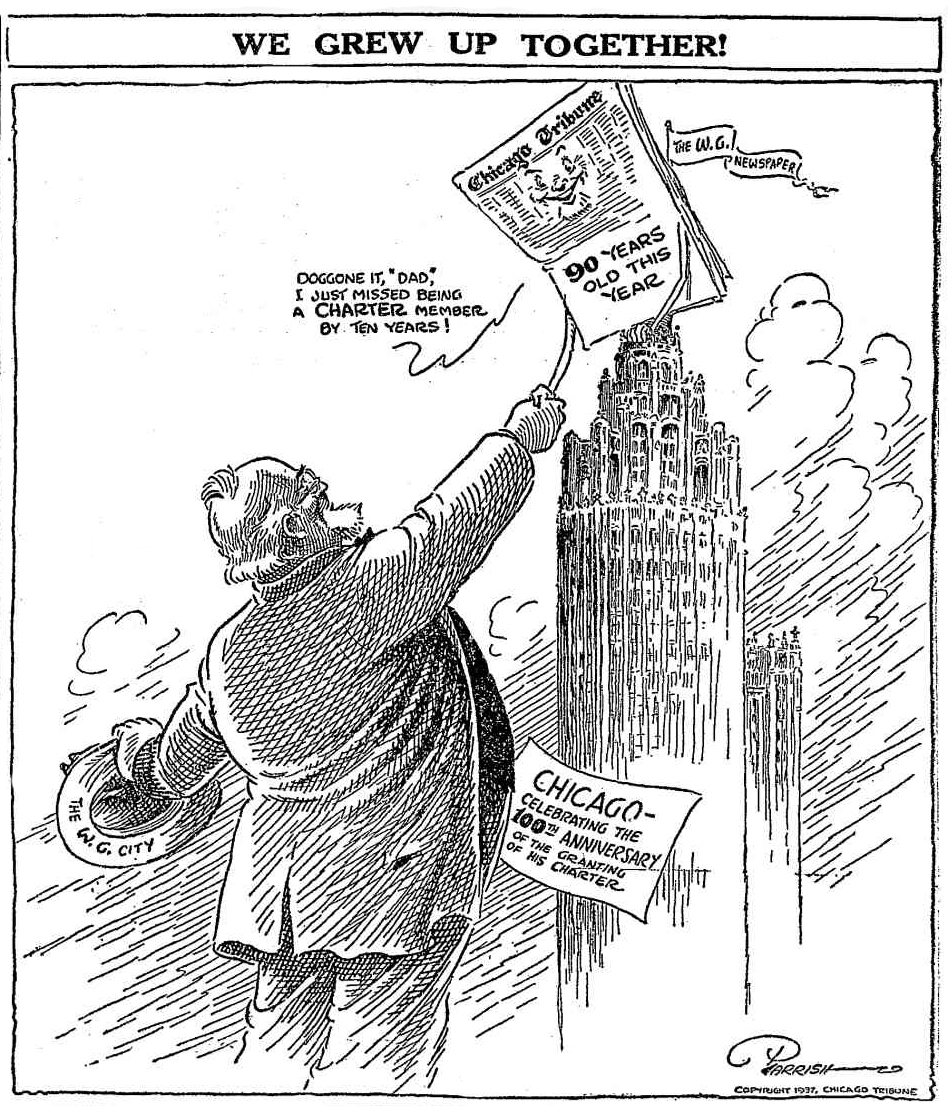 CHICAGO HAILS ITS PAST; LOOKS TO THE FUTURE.

In a program of sights and sounds, dedicated to the past and to the I Will spirit of the present and fu- ture, Chicago yesterday began the celebration of its hundredth birthday as a city. This first day of the charter jubilee-commemorating the centennial of the granting of the city’s charter by the state legislature on March 4, 1837—sounded the keynote of a seven months’ observance which will continue to Oct. 9.

Speakers of the day praised the city’s first century with its history of achievement. They foretold, too, the future Chicago and the progress that will come in the second hundred years.

“We look forward to the next cen- tury,” Mayor Kelly said, “and this generation has the opportunity through its works to make Chicago the greatest city in the world.”

Consular Corps in Parade.
The program began in the morning when foreign consuls in Chicago and their attaches, preceded by the Black Horse troop, paraded from the Drake hotel down Michigan avenue and then through the loop to the city hall. There Mayor Kelly received the for- eign representatives and the congratulations of their governments.

Shortly before noon Mayor Kelly and his party of city officials went to the Chicago Historical Society build- Ing in Lincoln park. Ther” the mayor was greeted by Frank J. Loesch, president of the Chicago crime commission.

At noon. in the auditorium of the society building, the mayor pounded the gavel which Chicago’s first mayor, William L. Ogden, had used 100 years ago. That was the signal for the official opening of the jubilee. 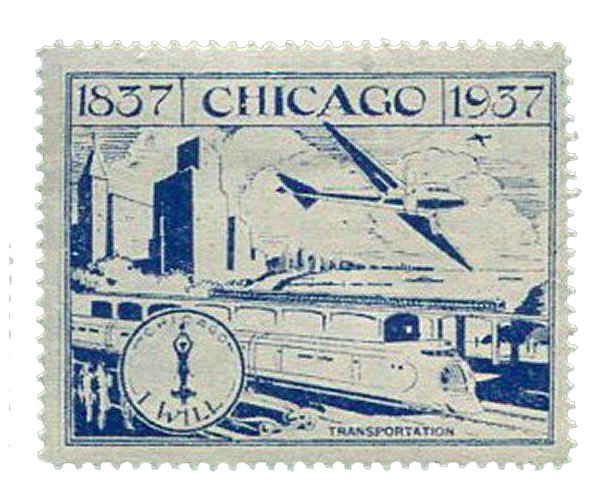 Old Cannon Roars Tribute.
A tribute of sound swept through the city. The old brass cannon in the Fort Dearborn replica on the lake front in Burnham park fired a salute. This was echoed 98 times by a battery of the 122d field artillery, Illinois Na- tional Guard. The old cannon tired the hundredth and concluding shot.

We live in the wonder city of the age. Our people come for- ward at the slightest call to carry our city ahead on the highway of progress. That is the I Will spirit, that intangible something which is largely responsible for our greatness of today.

The mayor greeted Mrs. Frederick West, a niece of Mr. Ogden, the first m a yo r, and her daughter, Mrs. Thomas Tyler. He placed a wreath on the Golden Book of Cook county, in which are commemorated the county’s war dead.

Englewood Progress Cited.
At 2 p. m. the mayor and his party appeared at 63d and Halsted streets where a bronze plaqueing the Englewood district’s part in the city s progress was installed in the sidewalk at the northeast corner.

An hour later, at State and Madison streets, the mayor put into place the first of 16,862 street signs designed to make Chicago’s 1,363 thoroughfares the best marked in the world.

From all parts of the world during the day came messages of con- to Mayor Kelly on the city’s centennial. Among the senders were President Roosevelt, the lord mayor of London, the mayors of distant Tokio and Shanghai, the Oberbuergemeister of Berlin, and Cardinal Mundelein from Florida.

Last night more than 10,000 persons witnessed a pageant in the Chicago Stadium depicting the city’s rise from a trading post to a metropolis. In the first scene Mayor Ogden and Daniel Webster were shown discussing the city and prophesying its great- ness. Following. was a melting pot scene, during which Miss Lorraine Ingalls, chosen the city’s I Will girl, told the story of the peoples who have immigrated here.

PAGEANT MARKS 100TH BIRTHDAY OF CHICAGO AS A CITY 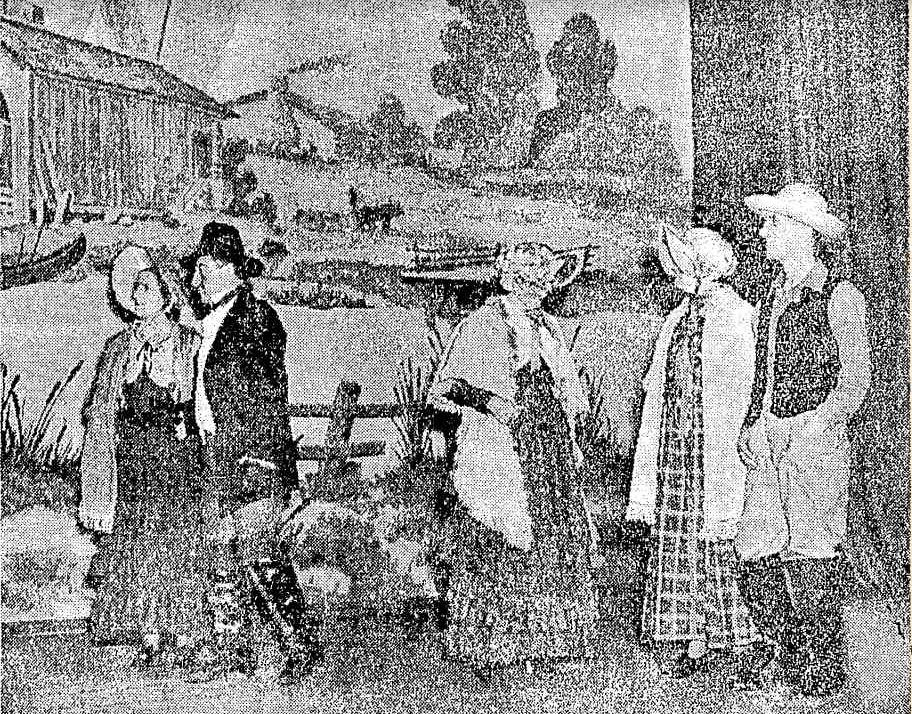 A high point of Charter day was Mayor Kelly’s placing of a new street sign at State and Madison streets. This was the first of 16,862 new signs that will mark Chicago corners. The signs are 26×5½ inches, with the street names appearing in 4½ inch black letters on a yellow background. That color combination, according to the United States bureau of standards, has the greatest visibility.

THE FIRST OF NEW STREET SIGNS ERECTED
Crowd around Mayor Kelly at State and Madison yesterday as he put up first new marker. With him are Commissioner of Public Works Hewitt (center) and D. K. Kennicott of PWA. 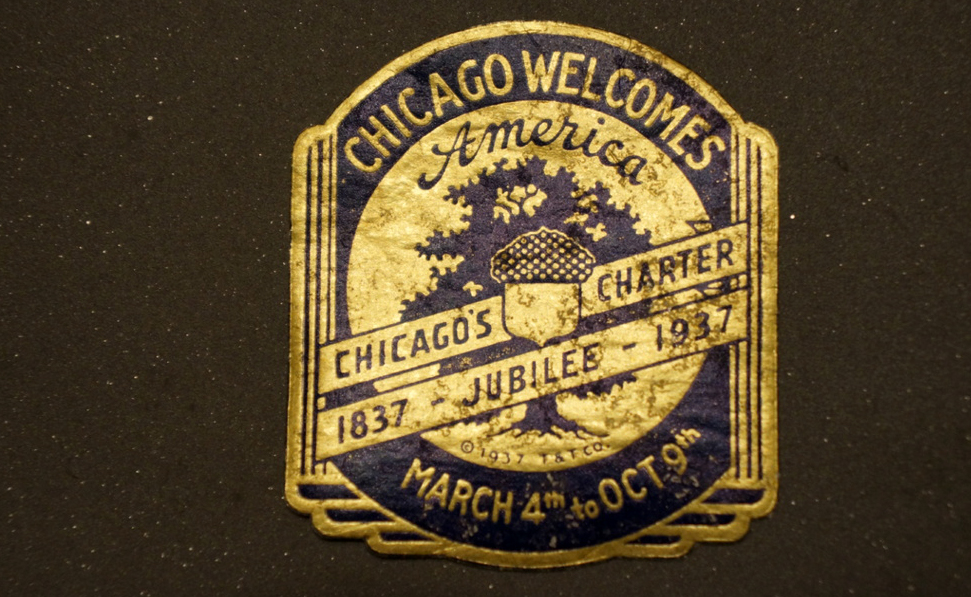