Sears, Roebuck & Co. Building
A building which strikingly carries out the modern architectural scheme of the Fair is that of Sears, Roebuck and Company. It has a commanding position on the Avenue of Flags. Across from it and a bit to the north, is the Administration Building, near the North entrance.

It is windowless, but has a circulating air plant with an air moving capacity equal to that of 1,800 ordinary six-room residences. A 150- foot tower rises from the base, and the grounds about it are beautifully landscaped. The architects were Nimmons, Carr & Wright.

A children’s playground is one of the features of service provided. You may use the telephone or telegraph, check parcels or wraps, obtain information about rooms, hotels, transportation, or the exposition itself. There is an emergency hospital, and a restaurant. The broad wings of the building offer places to rest, and there are refreshments and recreations here as well as within the building.

Exhibits, pictures, and demonstrations tell the story of merchandising. An illuminated map shows how widespread has been the influence of this well-known company in the distribution system of our nation. 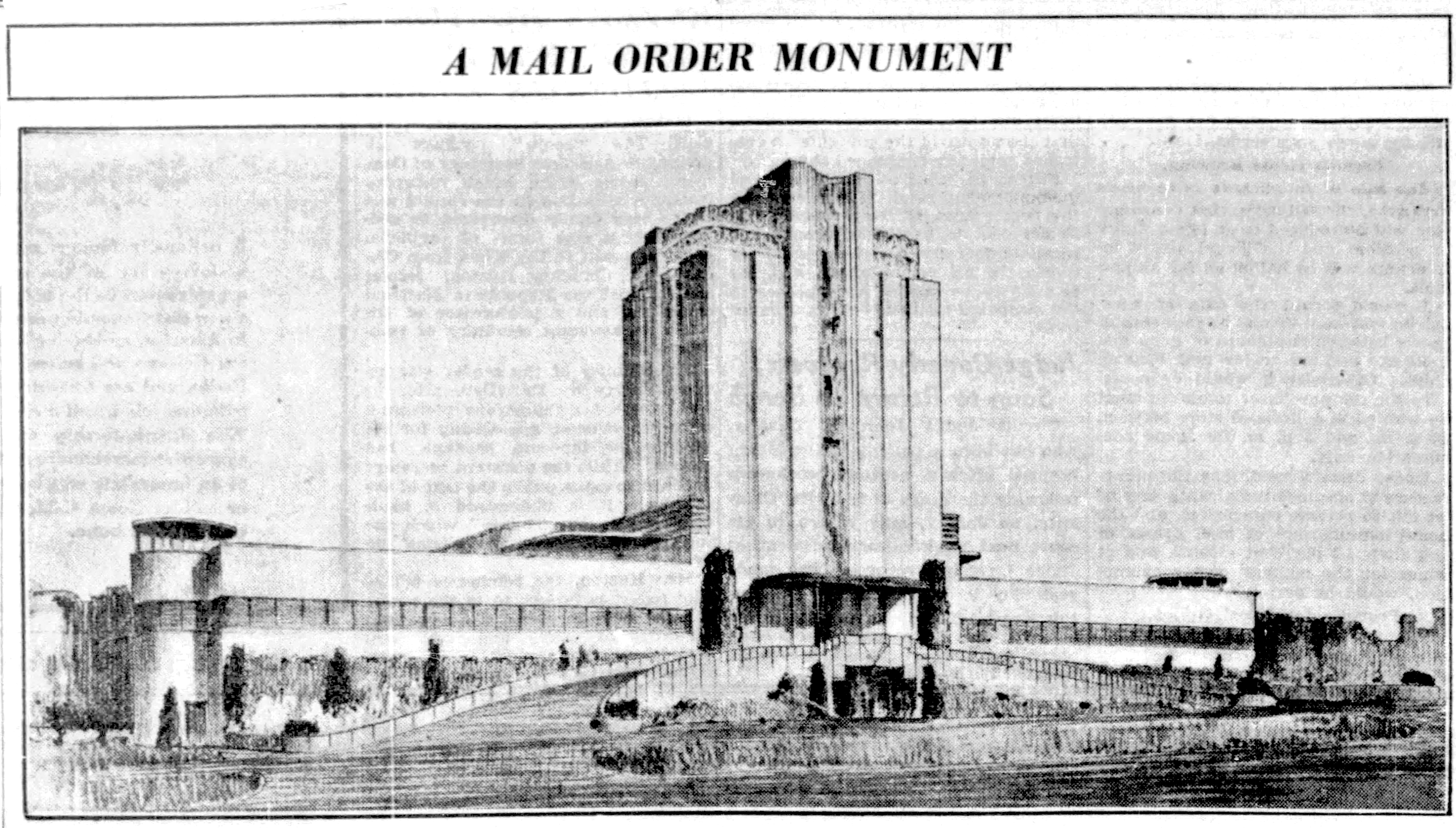 Simmons, Carr & Wright of Chicago, who have designed most of the buildings of Sears, Roebuck & Co. throughout the country, are architects of the above structure to be erected by the mail order house at the World’s Fair. It will be used as a general service headquarters for those who visit the fair and also as an exposition building. 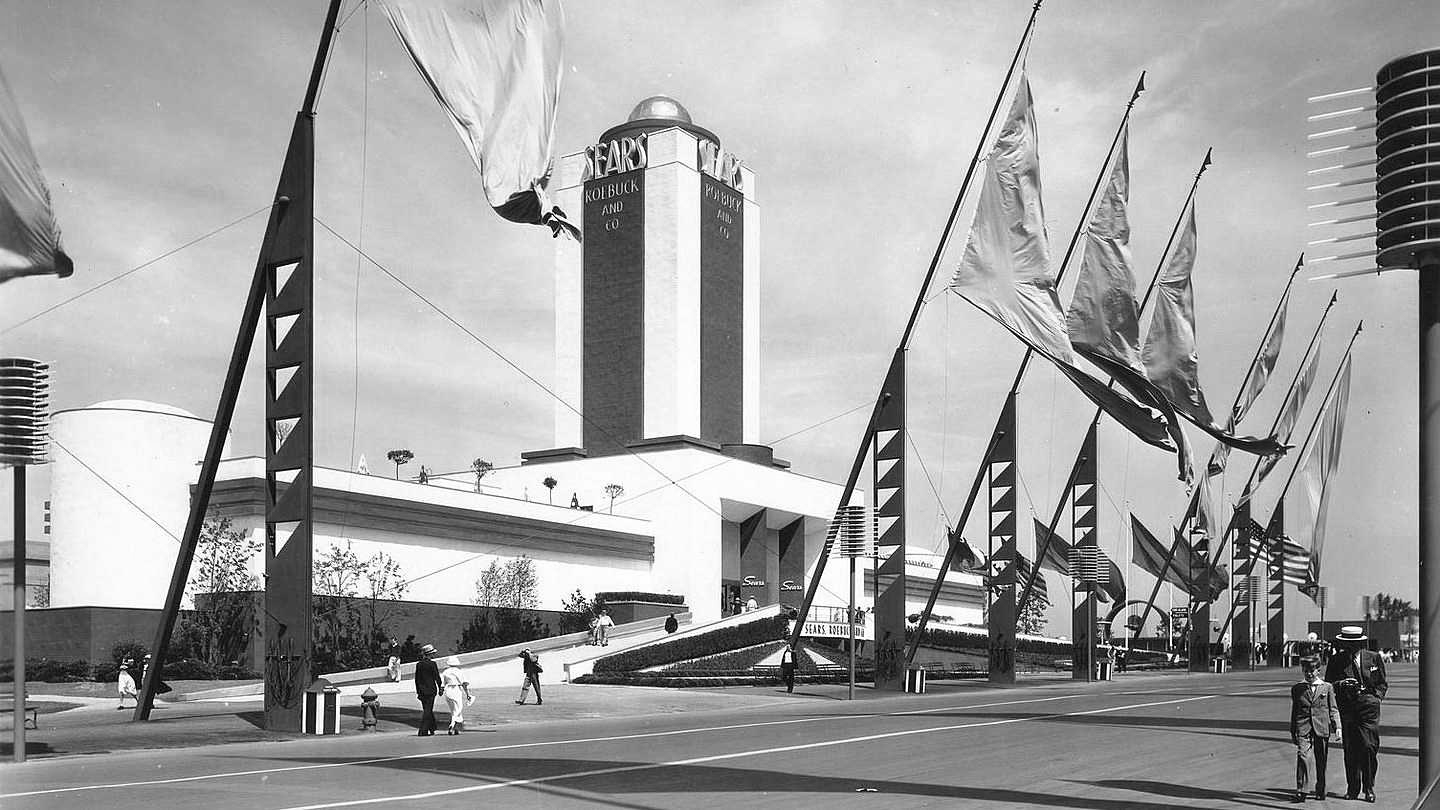 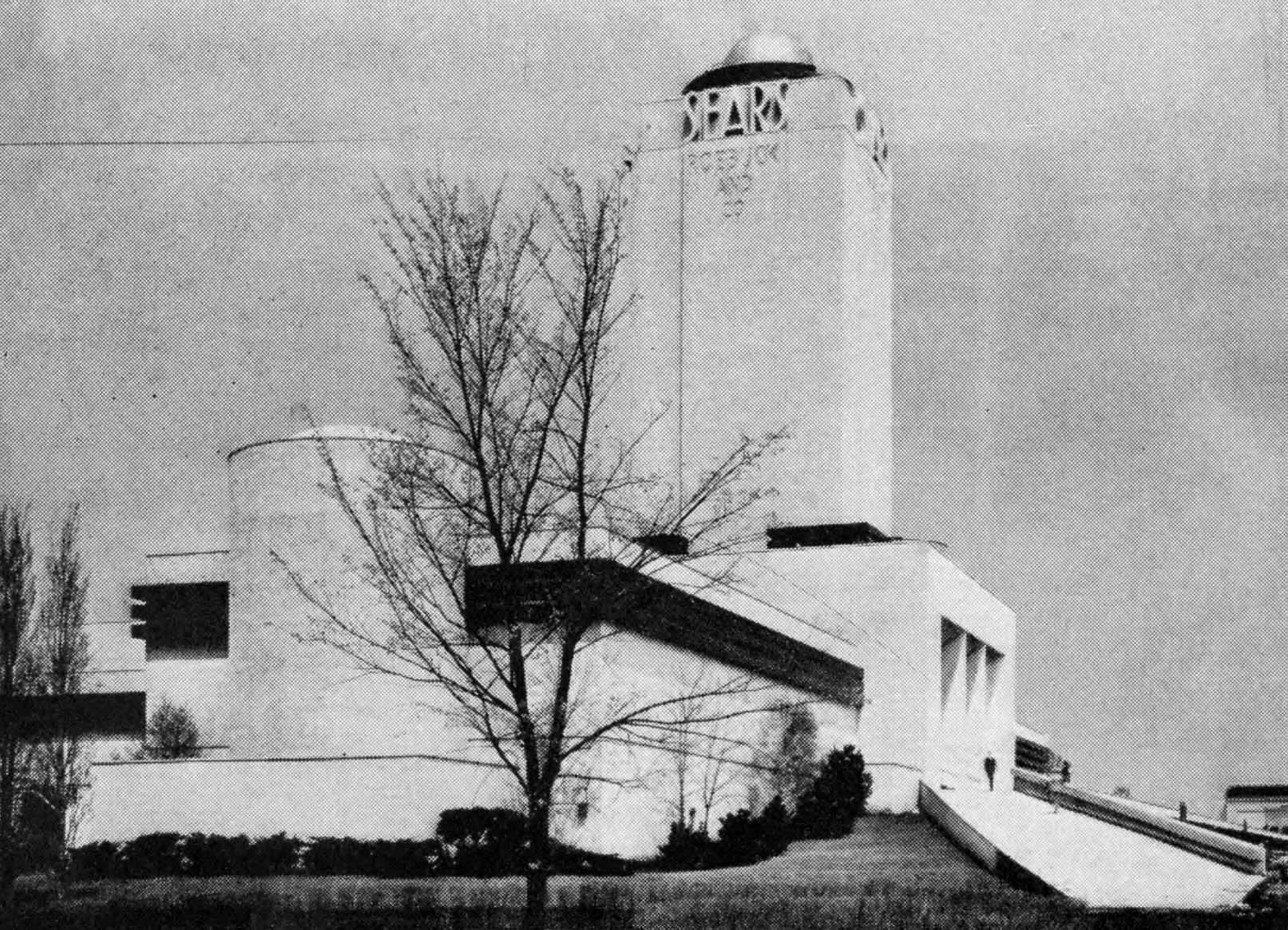 organized by Sears Roebuck & Co. in connection with the Chicago World’s Fair was announced in the Spring 1933 Sears Roebuck Catalog. Sears offered $7,500 in prizes—including a grand prize of $1,000. 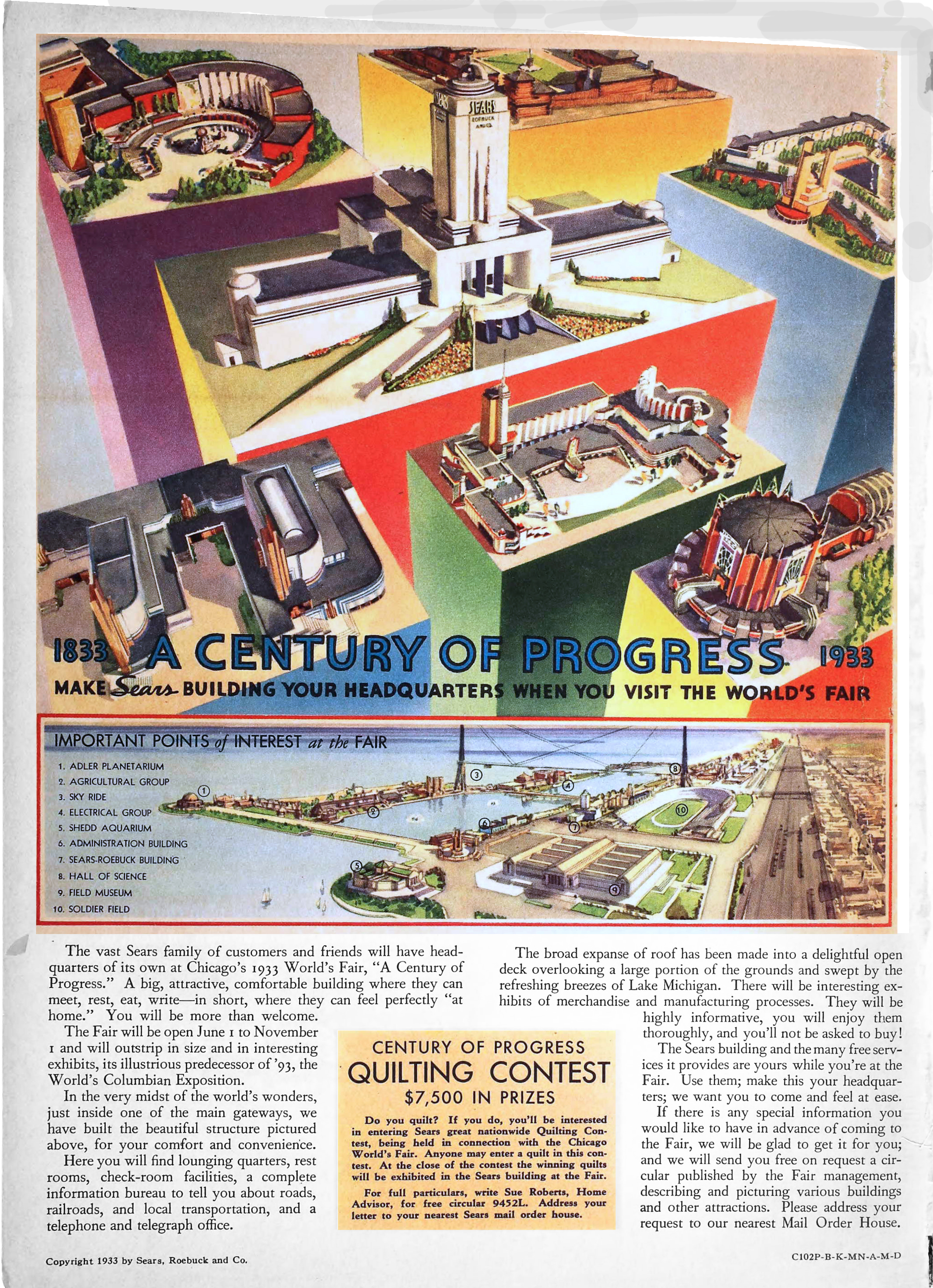 !933 Spring Sears Catalog
Promoting A Century of Progress and the Sears Quilting Contest

COMMEMORATIVE QUILTS hung at the 1933 Sears Century of Progress Quilt Contest. This was the largest quilt contest ever held. Sears, Roebuck & Co, sponsors of the contest claimed 25,000 entries were submitted to Sears retail stores and mail order houses. Top winners were sent on to 10 regional contests and the top three from each region were sent to be judged and hung in the Sears Building at the Chicago World’s Fair. 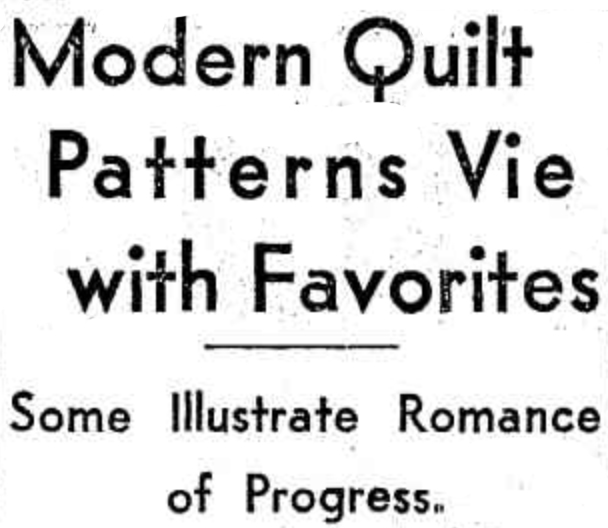 Nice shiny be pinned on the chests of optimistic judges of a hulit contest … something particularly fancy in the way of palms or appliqued rosettes or a swatch of feather quilting might be more appropriate . . . but decorations nevertheless, for these stirring and sewing days have brought to light some creations that will hold any spectator in a trance.

One Chicago store, has sponsored a quilt contest and the results are hanging In gala array, so many of the colorful affairs that you might well wonder Just where the treasures are to be kept after the excitement is over . These 1933 versions of patch quilts are interesting . . . beautifully handmade things fully equal to anything any of our female ancestors created. Undoubtedly many of the loveliest quilts were the ones carefully and painstakingly copied from age old handed down patterns from mellowed patterns belonging to the industrious crowd who quilted when Granny was a gal!

Delightful old fashioned names are perpetuated in these 1933 quilts . . . for instance, a prize winning beauty called “Delectable Mountain” an eye filling model exquisitely patched with patches that look like the summits of far-away mountains against a snowy -white background.

The new patch quilts are strictly 1933 and as darIng and as breezy as the new skyline of the Century of Progress buildings are stunning . . . you will see a breath-taking gray quilt that tells the story of steel. A cold gray colored background is patched with circles’ depicting cog wheels, in shades of dull yellow and tints of gray, figures of racing motorboats, super locomotives, cream separators, windmills, bridges, and everything that in part or all of steel. It is a most imposing sort of a quilt, rather cold and uncomfortable and a bit sinister, when you stop to consider it displayed over your old mahogany. but one of the most unusual and remarkable creations over displayed.

Another quilt, depicting the spirit of the times, is patched with skill and great imagination and artistry. It illustrates the history of Chicago . – . around the edge, the tepees and arrowheads of Chicago’s flrst blue blooded redskins . . . then the pattern of the famous stockade around Fort Dearborn . . . inside that realistic fence are the scarlet flames of the great Chicago fire, each clever patch showing the blackened silhouette of church, homes and stores against the devastating flames. 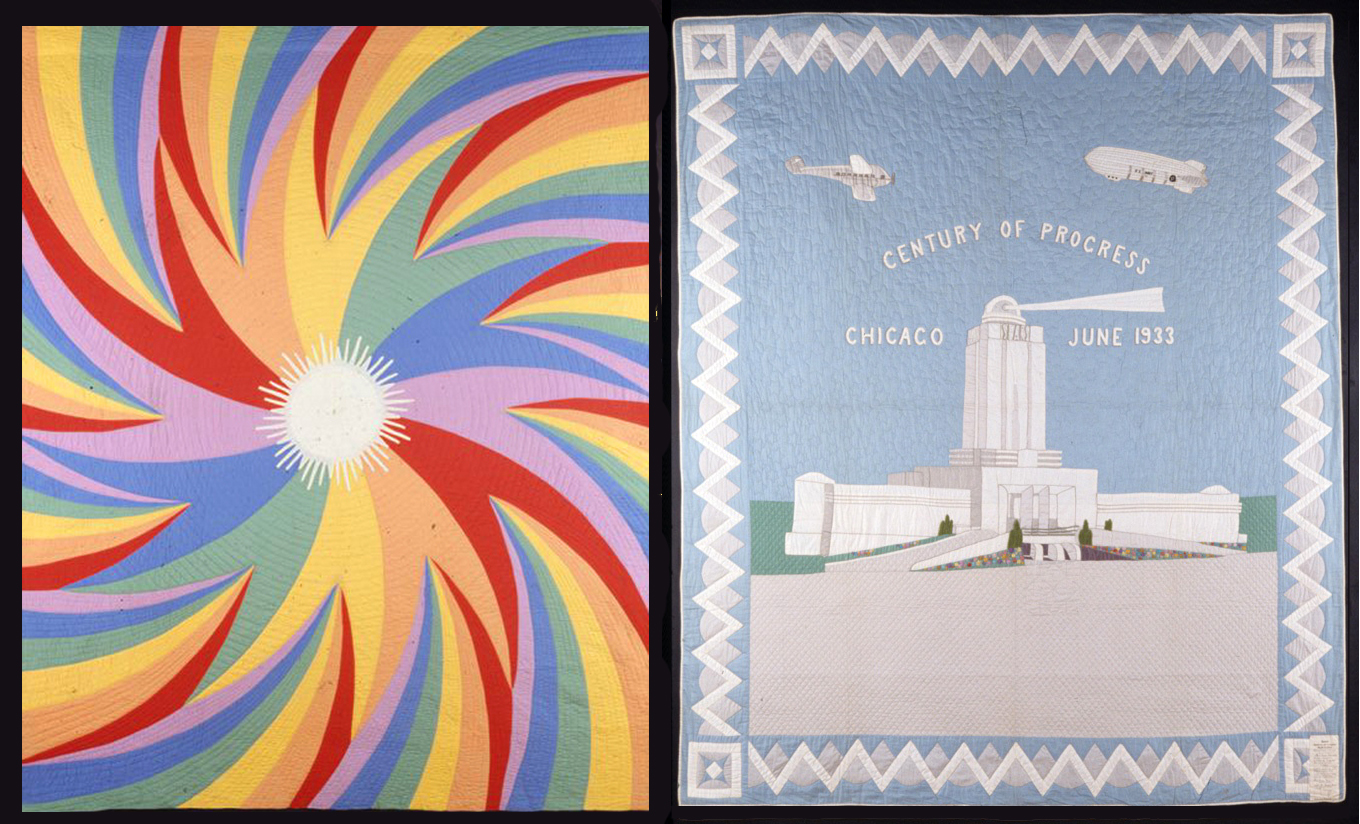 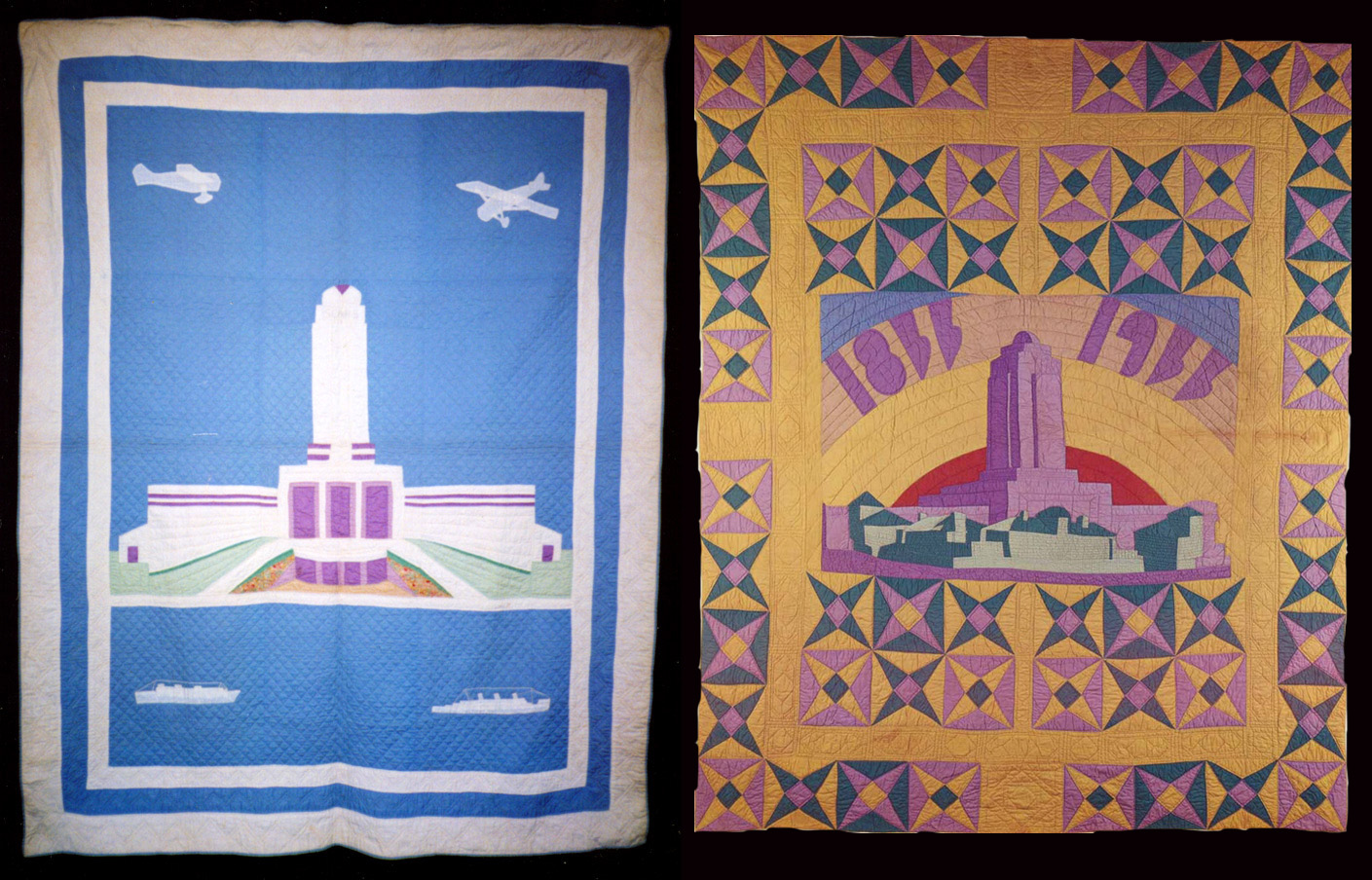 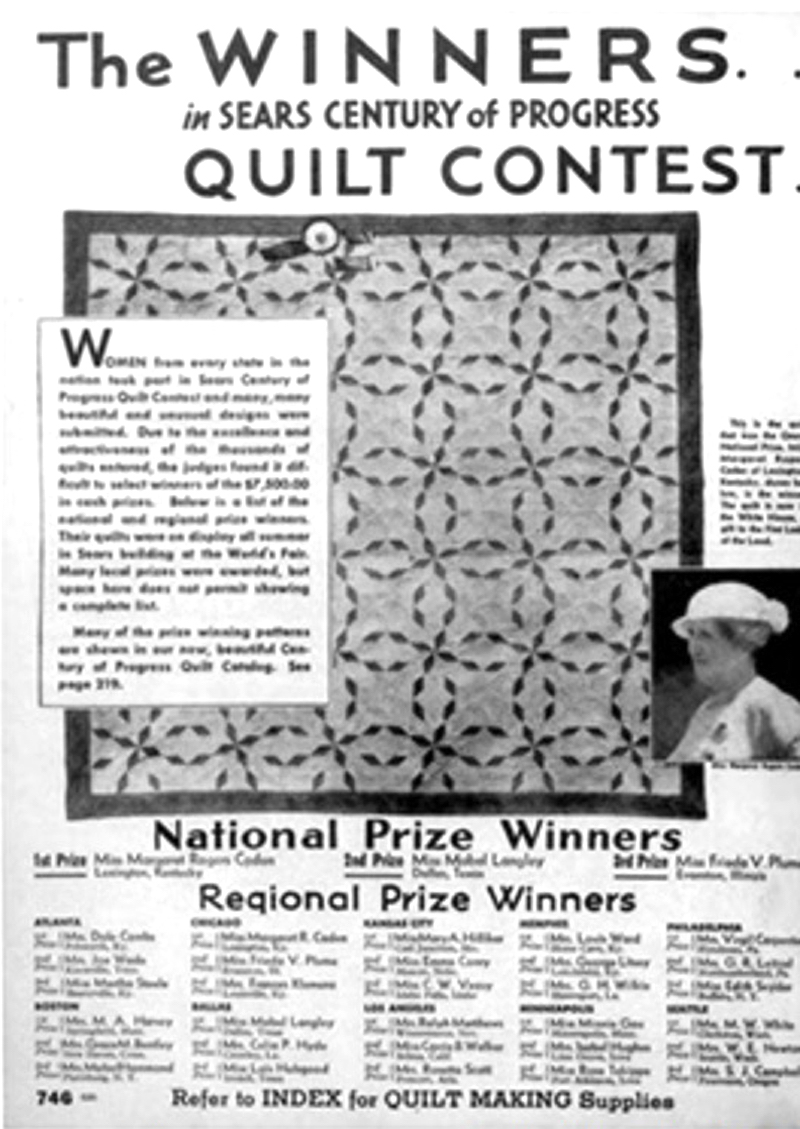 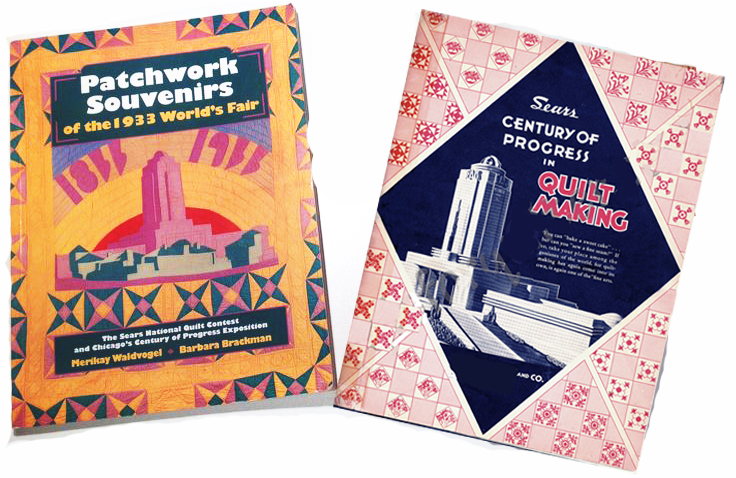 On December 19, 1933, Sears announces its first windowless retail store to be built in the Englewood neighborhood. 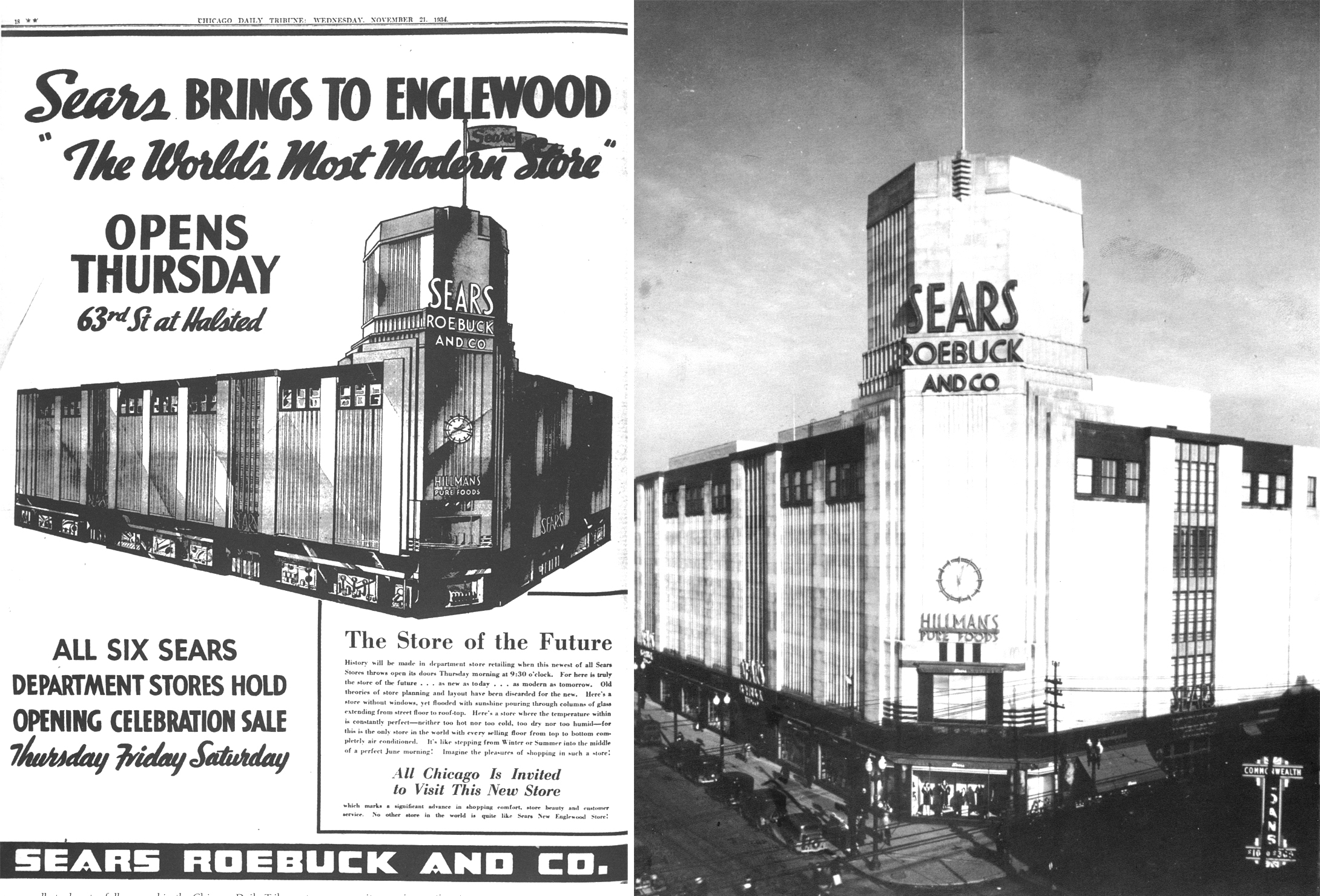