In the 1960s Frank Joseph covered the Chicago ghetto riots, events that were personal for him. Watching his grandfather struggle as a Jewish businessman in a segregated black neighborhood, Joseph grew up deeply aware of the divisiveness of race. When he left Chicago in the 1970s to become an editor at The Washington Post, Joseph could not leave his childhood behind. â€œThere wasnâ€™t a day for thirty-five years that I didnâ€™t think about writing this book,â€ he said. 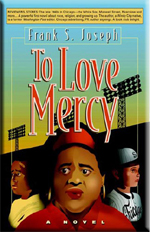 Frank Joseph cut his teeth as a writer at the famous training-ground City News Bureau of Chicago. He worked at The Associated Press, covering the Democratic National Convention street disorders, the Detroit riot, Dr. Martin Luther Kingâ€™s march into Cicero IL, and just about every ghetto uprising and incident of urban violence that defined the turbulent mid-â€˜60s in Chicago. Joseph was an editor with The Washington Post during the Watergate years. In 1982, he founded Key Communications Group Inc., a specialized-information publishing company. He and his wife, Carol Jason, a sculptor and artist, met in Chicago and now live in Chevy Chase MD; they are the parents of Shawn and Sam.