In 1919, William Wrigley, Jr. gained a controlling interest in the Chicago Cubs and in 1921 he made the decision to have the Cubs train on Catalina. In doing so, he became the first baseball owner to bring a major league club out West for spring training, building a facility for the Cubs on Catalina that he humbly called “Wrigley Field.” (Regular-season major league baseball wouldn’t arrive on the West Coast until the Dodgers and the Giants made their moves west in the 1950s).

Chewing-gum magnate William Wrigley Jr. bought the Angels in 1921 as a farm team for his Chicago Cubs for the (then) astronomical sum of $150,000 and then built a stadium for the team a few years later. Construction for Wrigley Field began in 1924 and the stadium opened in 1925. 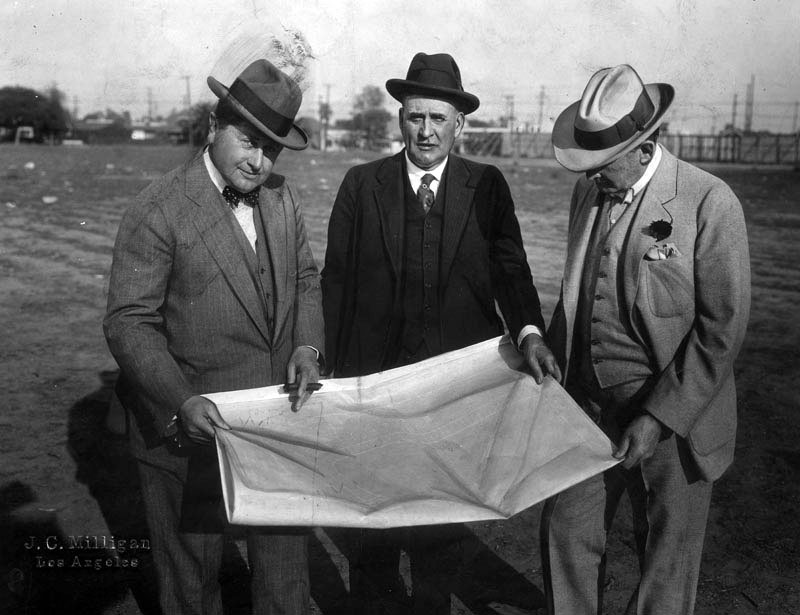 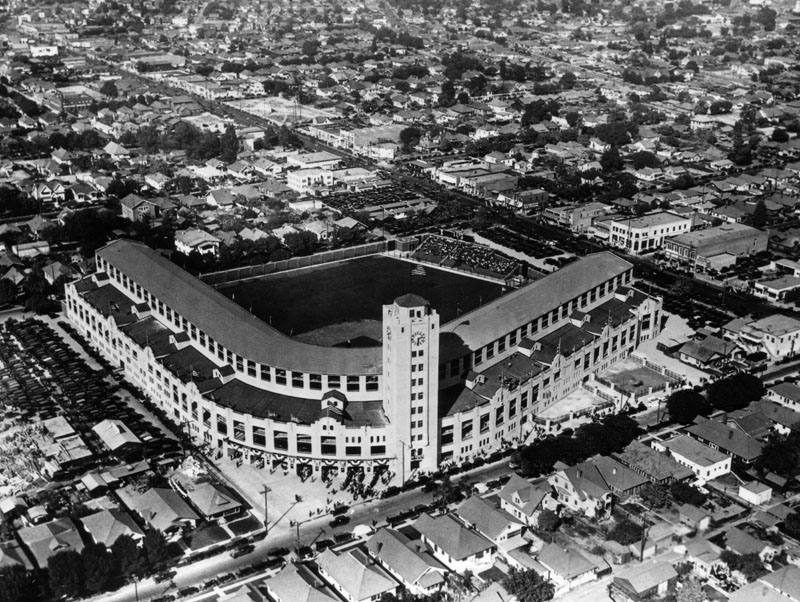 The Los Angeles Wrigley Field was built to resemble Spanish-style architecture and a somewhat scaled-down version of the Chicago ballpark (known then as Cubs Park) as it looked at the time. It was also the first of the two ballparks to bear Wrigley’s name, as the Chicago park was named for Wrigley over a year after the L.A. park’s opening. At the time, he owned Santa Catalina Island, and the Cubs were holding their spring training in that island’s city of Avalon (whose ballfield was located on Avalon Canyon Road and also informally known as “Wrigley Field”).

Coincidentally, one of Wrigley Field’s boundary streets was Avalon Boulevard (east, behind right field and a small parking lot). The other boundaries of the block were 41st Street (north, behind left field), 42nd Place (south, behind first base), and San Pedro Street (west, behind third base and a larger parking lot). Not only did L.A. Wrigley get its name first, it had more on-site parking than the Chicago version did (or does now) 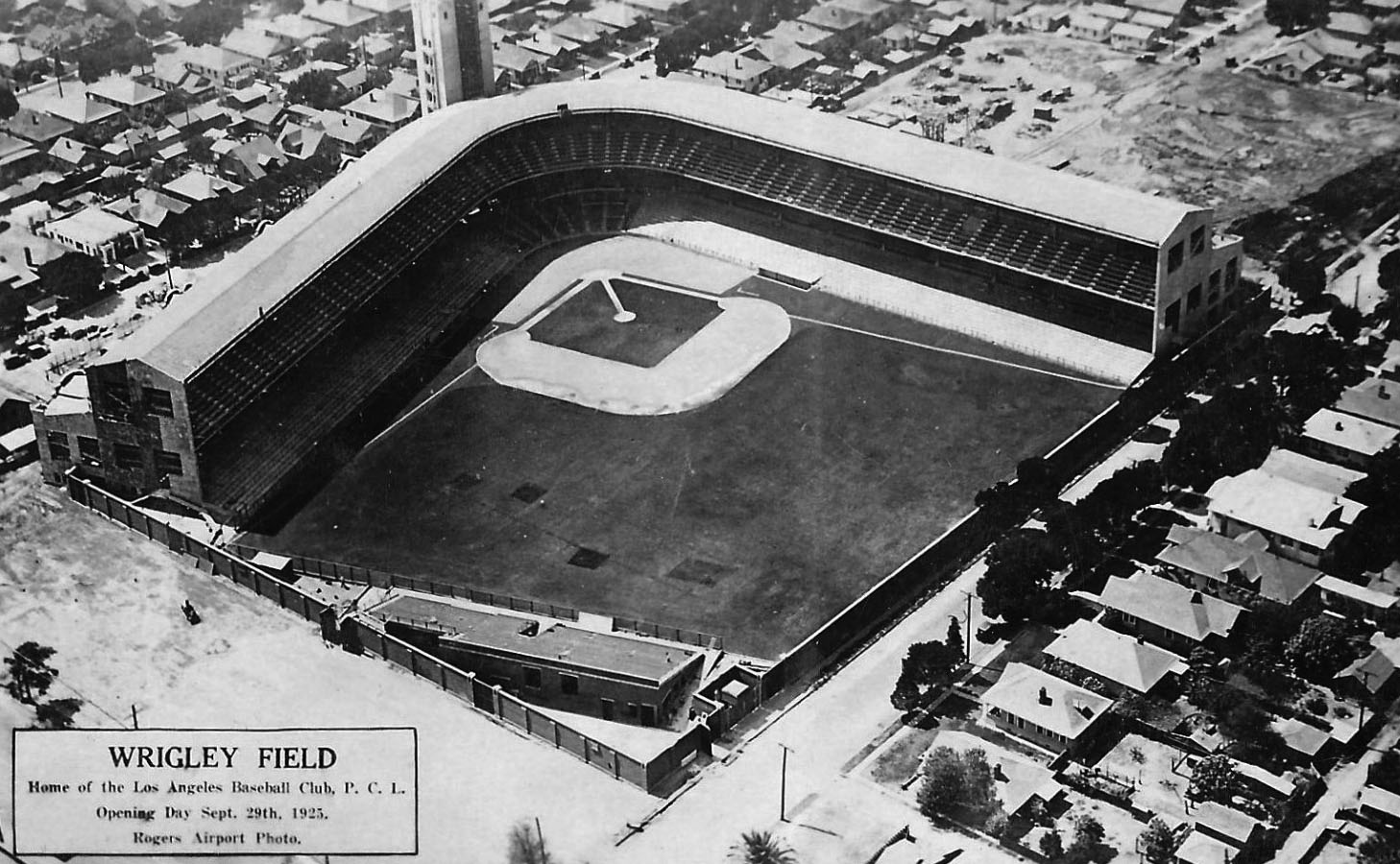 View of Wrigley Field on opening day, September 29, 1925, as seen before the stadium was filled.

Prior to 1925, the Angels played at their former home at Washington Park, and before that, at Chutes Park.

Erected in 1925 at 42nd Place and Avalon Blvd., Wrigley Field was a 21,000-seat, home-run hitters paradise. It also doubled as the set for such films as “Pride of the Yankees”, “Dam Yankees” and “Alibi Ike” and the “Home Run Derby” television show. 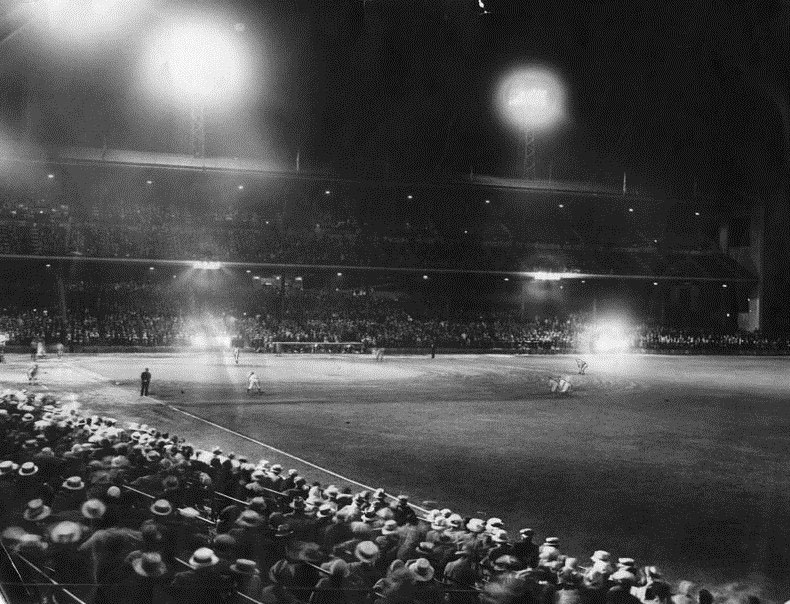 The “W Flag” also has its origins in Catalina. William Wrigley owned the Wilmington Transportion Company. The company was founded in 1877 by the Banning brothers, the original owners of Catalina Island. The company operated several vessels that transported visitors from mainland ports to Catalina Island, including the S.S. Catalina and S.S. Avalon. The Wilmington Transportation Company’s logo was a blue flag with a white W. In 1937, Wrigley brought the W flag to Chicago. The flag became a symbol for the team’s wins or losses. With a game win, a white flag with a blue W was hoisted up the flagpole to signal Wrigley field passerby’s of a win and a blue flag with a white L signaled a loss for the Chicago team. 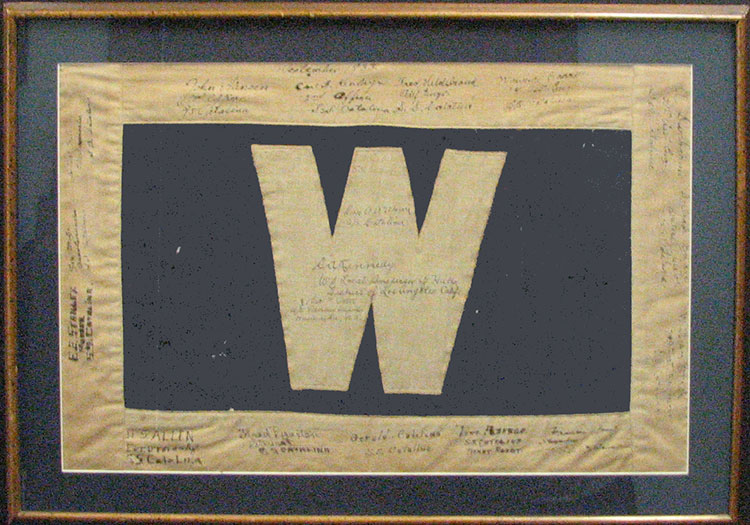 This W flag was possibly flown aboard a steam ferry built in 1924 that chugged to and from William Wrigley’s island off the coast of Los Angeles. The flag is signed by crew members from the Wilmington Transportation Company, which operated the ships. The signatures are dated 1933. 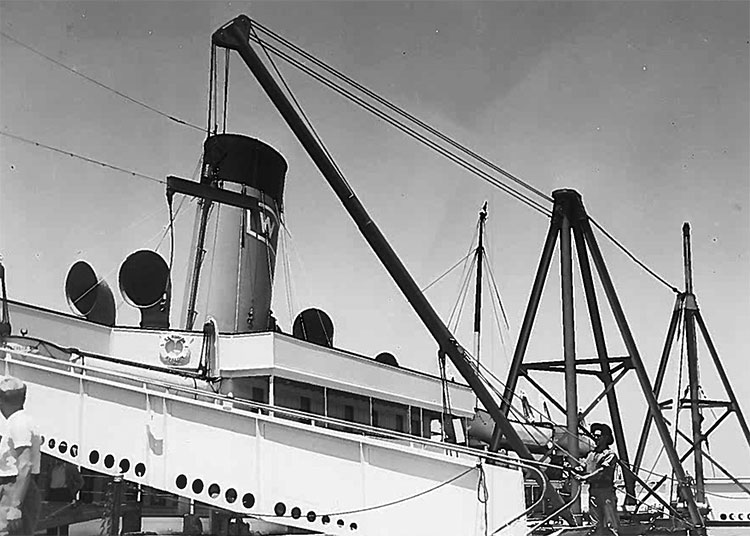 Formerly called the SS Virginia when it sailed the Great Lakes, this ship was bought by William Wrigley Jr. and renamed the SS Avalon. It was 263 feet long and capable of carrying nearly 3,000 passengers.

BY THE ASSOCIATED PRESS

Pasadena, Cal., Feb. 12.–Announcement was made here tonight by William Wrigley Jr., gum manufacturer nnd one of the principal owners of the Chicago National League Baseball club, that he had purchased tlto greater part of SunUi Catalina Island, the noted pleasure resort, about thirty miles off the coast from San Pedro. The property was bought from Captain William Banning and others of the Banning family, for approximately $3,000,000. Mr. Wrlgley said he would make extensive alterations to make the Island more attractive as a resort.

REPORTED IN CHICAGO.
Reports to the effect that William Wrlgley Jr. had purchased Catalina Island were current In the Chicago loop yesterday. Mr. Wrlgley was said to have written local associates advising them “we aro buying the Island.” The Tribune telegraphed to California. for verification. Tho only reply received up to 3 a. m. was the following dispatch from Los Angeles: ” Secretary Fleming of company owning Catalina island says report of sale to Wrlgley is absolutely false.” 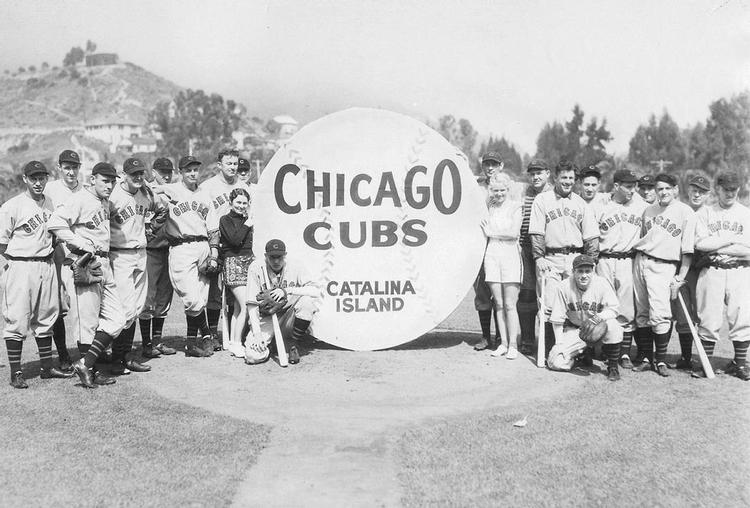 The Cubs trained in Avalon from 1921 to 1951, with the exception of the war years of 1942-1945.
Nineteen Hall of Fame players trained with the Cubs on Catalina Island, including such legends as Grover Cleveland Alexander, Dizzy Dean, Roger Hornsby, Joe McCarthy and Hack Wilson.