Toney and Vaughn Give No Hits in Nine

Only 27 Face North Side Hurler in Regulation Time and He Fans Ten in a 1 to 0 Battle.

Hippo Vaughn, the intelligent southpaw, was doomed from the beginning of this combat. He whiffed the first man up, a sure sign of defeat, and the Reds trimmed him, 1 to 0, in ten rounds, during which Fred Toney closed the Cubs out with nothing that looked like a hit. Neither side struck a safe blow in nine innings and each pitcher walked two batsmen. Hippo fanned ten Beds in nine frames, but Mr. Toney once heaved a rock across the Mississippi River at Memphis and he still has something on Hippo in this respect.

Something was bound to crack in this sort of a battle, and it happened to be the Cubs. The tenth opened with the popping out of Gus Getz, who got into the doings when H. Groh was canned in ths Seventh. Kopf broke Hippo’s crust with a single to right. Anybody is liable to bust a hit. Neale skied to center, and Chase would have done the same if Williams had held the ball. Cy faltered on this clout, and when he did reach the pill he spilled it on the grass. Kopf took third on the muff andI while Jim Thorpe was at bat Chase stole second. 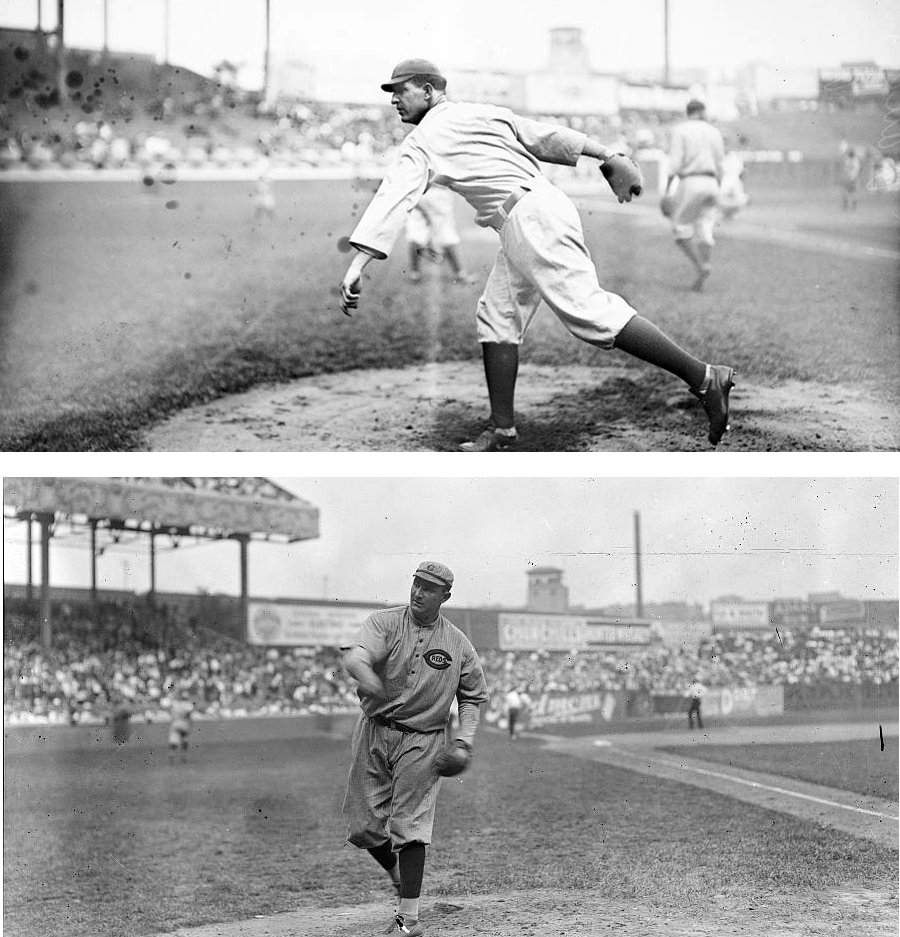 KOPF COUNTS RUN.
Thorpe bumped a slow twister near the third base line and both Hippo and Wilson went after it. The pitcher picked up the ball and tossed to Wilson, who was looking for the throw to be made to first. Hippo had figured he could not stop Thorpe and was playing for the plate. The ball bounded off Wilson’s manly chest and Kopf counted. Chase came tearing in, but Wilson scrambled after the ball and met Hal many feet from the rubber.

That was the ball game, except for the formality of putting the Cubs out of their misery in the last of the tenth. Mr. Toney remembered about throwing the rock across the river at Memphis and opened strong by fanning Doyle. The esteemed Merkle died hard. He slammed a terrific drive to left that seemed bent on clearing the bleacher front for a homer. Alonza G. Cueto, the fiery little Cuban patriot, bumped himself against the screen and caught the ball. Hollow groans from the multitude still thinking of the rock and the wide river, Mr. Toney let out a fresh kink and fanned Cy Williams. This concluded the exercises, barring the post-mortem in the Cubs’ dressing room. 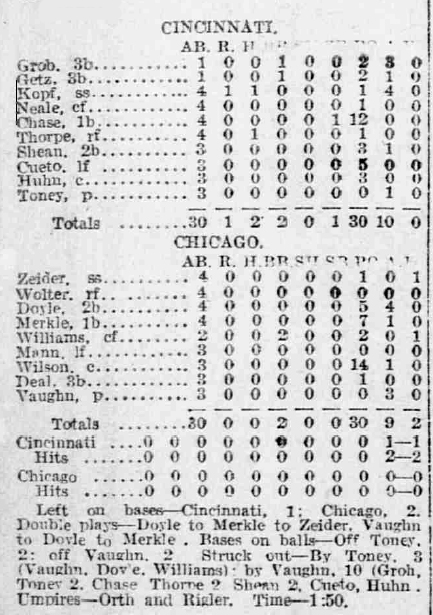 BEST GAME OF SEASON.
It was not a day for tenderly nurtured athletes to expose themselves to the bitter climate, and yet the Cubs and Reds reeled off the best game of the season. Some of the elderly experts said the nine rounds without a swat on either side constituted a record. Also, that Mr. Toney established a record aside from the one at Memphis. He pitched a great game in all details, stopping once to wave a soiled forefinger under Al Orth’s nose. In ten innings three Cubs reached first base and none ventured beyond that station. Two of these adventurers walked and one of them was forced. That let the third man on.

Hippo was even more tight-fisted than his glittering opponent. Prior to the tenth spasm the only Reds to arrive at first base got there by the pass route. In the fourth Heine Groh got a walk through his own individual efforts, but in the seventh Heine was obliged to collaborate with Gus Getz. A southpaw certainly is there with the goods when it takes two guys to get one pass. Groh squawked about something when the count was two strikes and one ball. Umpire Orth chased Heine and G. Getz got the rest of the pass. Kopf hit into a double play behind this walk, same as he did when Orth was passed in, the fourth.

VAUGHN FANS THREE IN FIFTH.
Vaughn fanned Chase, Thorpe and Shean in the fifth and continued the dusting process with Alonzo G. Cueto, the first man up in the sixth. Thorpe and Shean got it again in the eighthvand Hippo was so breezy he slipped the strike dose to Huhn and Toney in the ninth.

BASEBALL history was made at Weeghman Park yesterday in that 1 to 0, ten-Inning victory scored by Fred Toney of Cincinnati over the Cubs. It was the first game on reeord in which both teams failed to get s hit In nine innings. A careful checking up of the dope book after Fred’s brilliant feat disclosed the fact that neither major nor minor league annals have any record of such a contest. There are several instances of extra-inning, no-hit games, but no reference to a game in which both sides went hitless.

A peculiar coincidence disclosed by the aenrch through the records is that on May 1909, eight years ago almost to the day, Toney pitched and won a seventeen-inning no-hit game for Winchester against Lexington.

It was this marvelous Job that brought Toney to the notice of the Cubs, who gave him his first big league trial, and it was at the expense of his former benefactors that Toney again entered baseball’s hall of fame as the first pitcher in history to win a game that failed to disclose a blow for either team until after nine rounds had been played.

In the almost 100 seasons of Major League baseball that have followed the Hippo Vaughn-Fred Toney “double no-hitter” on May 2, 1917, the event is still unique.

Charles Weeghman, after the game.