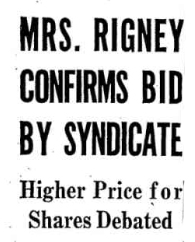 Mrs. Dorothy Comiskey Rigney, owner of the majority interest in the Chicago White Sox Baseball club, Monday night confirmed The Tribune’s exclusive report that sale of her stock shares to an outside syndicate may be imminent.

William (Bill) Veeck, who previously has held interests in two other American League franchises, heads the syndicate negotiating with the Rigney attorneys.

Another member of the group is Hank Greenberg, wealthy former home run king who last month sold his minority stock interest in the Cleveland Indians.

“My White Sox stock has not yet been sold,” said Mrs. Rigney. “but I have to admit that our attorneys have been negotiating for the sale of the stock. Yes, negotiations are going on.”

Veeck Ponders Counter Price
A source close to the baseball club said that Veeck, who has made a previous offer for Mrs. Rigney’s interest in the White Sox, now was pondering a higher price asked in counter-proposal.

Mrs. Rigney declined to comment on whether the final decision was up to Veeck himself.

Veeck admitted that negotiations are underway but said all information would have to come from Mrs. Rigney. He lives in Cleveland but has been visiting his mother in suburban Chicago. 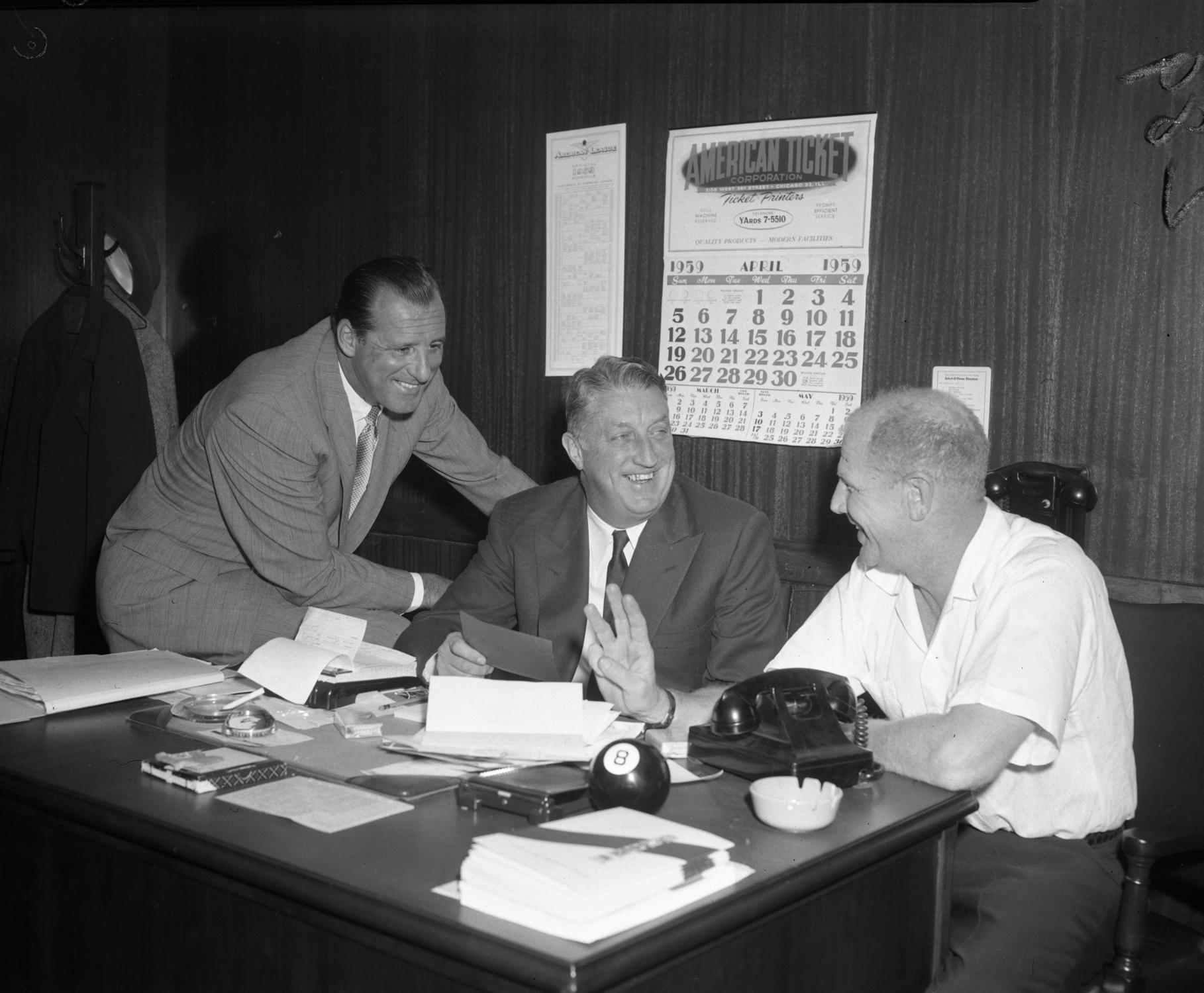 Father Ran Cubs
Veeck, who operated the Cleveland Indians and St. Louis Browns, has been out of major league baseball since the latter club was transferred to Baltimore in 1954. His father, the late William Veeck Sr., formerly was president of the Chicago Cubs.

Strained relations with her brother, Charles Comiskey, over operation of the White Sox since the death of their mother in 1956, brought on Mrs. Rigney’s decision to sell.

Several Court Actions
The family feud was brought into the open a year ago when the first of several court actions was instituted by Comiskey against his sister, executrix of their mother’s estate. Comiskey is a vice president of the White Sox. Mrs. Rigney is secretary treasurer. The late Mrs. Comiskey’s post of president has not been filled.

Mrs. Grace Comiskey willed Mrs. Rigney 500 more shares of White Sox stock than her son, assuring the daughter control of the board of directors, which numbered five. However, Comiskey was successful in an action late in 1957 to limit the board to four, thus giving him equal authority.

List of Stockholders
Mrs. Grace Comiskey’s estate included 4,063 of the 7,450 White Sox shares that were outstanding at her death. The other 3,383 shares already were held by her heirs, or in trust for Charles.

The White Sox corporation subsequently paid $296,000 ($200 per share) for 1,480 shares from Mrs. Comiskey’s estate. This was a financial maneuver to transfer corporation funds in assist in payment of estate expenses. With the corporation retiring the 1,480 shares, 5,970 shares now are outstanding. When the estate is settled the stock will be distributed this way:

Last April, Mrs. Rigney charged that her brother’s conduct in the management of the White Sox endangered the earnings of the team.

Sox Attendance Drops
Mrs. Rigney asserted that if Comiskey remains in control earnings of the club could “decline to a point that purchase of its shares will be an imposibility.”

Comiskey, last July, declared he has no intention of selling his share of the club.

Veeck, since losing control of the St. Louis Browns, who were near bankruptcy when sold to a group of Baltimore men, has been vainly trying to get back into baseball.

Directed Indians at 32
Veeck, one of baseball’s colorful operators, took over the Cleveland Indians in 1946 when he was 32 years old. The Indians set five all-time major league records in 19e48 when they won the American League championship and world series. Not even Milwaukee or Los Angeles has come close to the 2,620,627 home attendance in Cleveland that year.

After the 1949 season, Veeck and his partners sold the Indians and his reported personal profit was $500,000. Veeck was making progress with the Browns in St. Louis until Brewer Gus Busch bought the St. Louis Cardinals.

BY EDWARD PRELL
Bill Veeck, under pressure of illness, yesterday resigned as president of the White Sox and sold his stock in a move which made Arthur C. Allyn Jr., 47, the new strong man of the American League baseball club. He will become its new president.

While the 47 year old Veeck, baseball’s most colorful promoter, was confined to his south side apartment, Allyn “regretfully” announced details of the sale at a press conference in Comiskey Park yesterday afternoon.

Lane Post Filled
Allyn also purchased the holdings of Hank Greenberg in acquiring the 54 per cent the Veeck syndicate purchased Feb. 17, 1959, from Mrs. Dorothy Rigney for $2,525,000. Greenberg owned 40 per cent in the company known as CBC (that is the official name of the corporation).

Allyn owned approximately 25 per cent as an original member of the Veeck syndicate, along with his father, the late Arthur C. Allyn Sr.

Greenberg will assume the title of general manager, an office technically vacant since Frank Lane resigned late in the 1955 season. He also remains as vice president-treasurer and a member of the board of directors, now reduced to four by the resignation of Vleck. 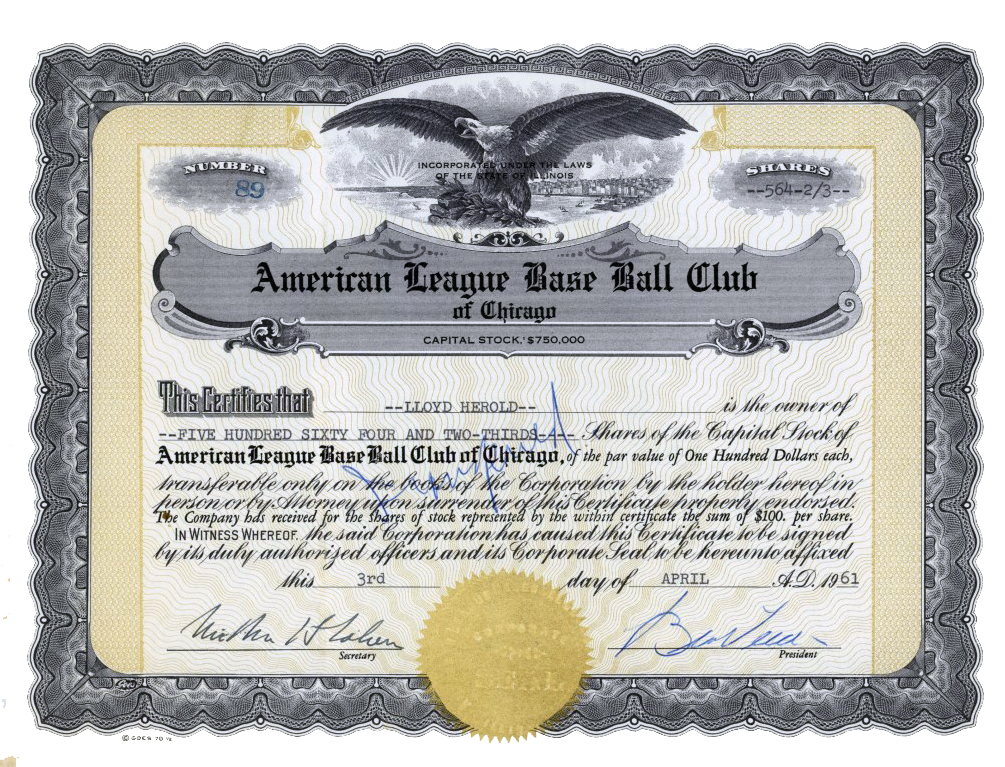 Improve Tax Setup
Allyn said that both Veeck and Greenberg were handed “cash” Friday in payment for their interests.

Greenberg sold so that a more favorable tax structure could be set up, said Allyn. The CBC now becomes part of Artnell Industries, a holding company investment securities. It also owns the Fashion Industries of Michigan and majority control of Alco Oil and Gas Corp., among other interests.

The other 46 per cent of White Sox stock is owned by Charles Comiskey, 35 year old brother of Mrs. Rigney. He lost a series of court battles two years ago to prevent his sister, wife of the former White Sox pitcher, from selling out to the Veeck group.

In effect the White Sox now have only two owners—Allyn and Comiskey. Allyn’s brother, John W., will be associated in the venture. Both are officials of the brokerage firm and the Artnell Industries.

No Talk with Chuck
Allyn said last night that he has had no meeting with Comiskey and none is planned.

“They (Comiskey and company) called and asked for a meeting, but there is no meeting planned,” Allyn said.

Veeck and Greenberg will be welcomed back as stockholders in the CBC, Allyn declared.

“I hope and pray that Bill is only temporarily out of the picture,” he said. “The circumstances of the purchase takes all the pleasure out of it because Bill has been a dear friend.”

Allyn said that he visited Veeck in his apartment Thursday and outlined his offer.

Veeck’s Health Declines
“This was solely because of the necessity for Bill to become completely disassociated from baseball while he is fighting to regain his health,” said Allyn.

Veeck’s health has declined since a seventh amputation on his right leg on June 24, 1960. He suffered am injury while serving in the marines in the South Pacific during World War II.

Veeck returned May 5 after two weeks of tests at the Mayo clinic in Rochester, Minn., will go back there Thursday for further observation. 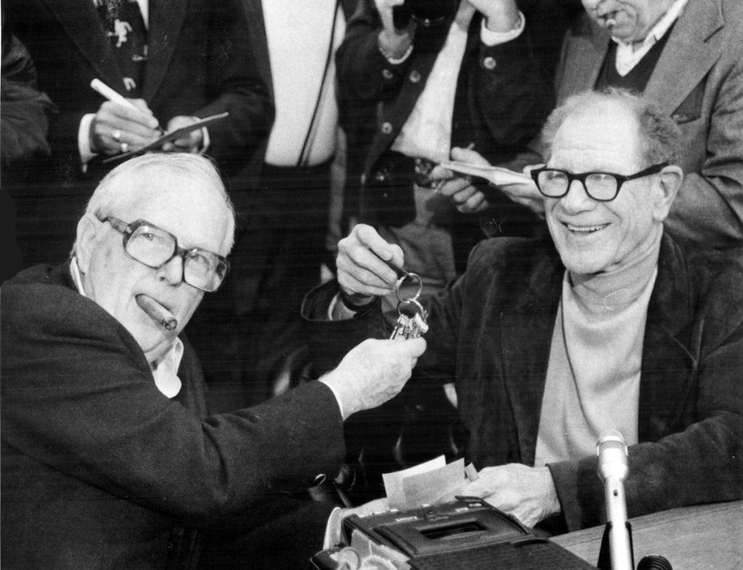 Hank Takes Over
Last Tuesday, Greenberg took active charge of the White Sox, announcing that Allyn and Veeck had designated him as the sole spokesman for the majority interests of the White Sox. At the same time, Greenberg said he had rejected the reported $4,800,000 offer of a syndicate headed by Bernard Epton of Chicago, for the 54 per cent.

At his press conference, Allyn declared:

I am going to keep this ball club. And I hope Bill joins me, like I joined him two years ago.

Allyn said his group has had “two and a half offers” in the last six months to sell its stock. The “one half” obviously referred to the Epton group.

Pressed if he would consider selling the 54 per cent, he said:

I have no plans to negotiate the sale of the White Sox. I plan to keep them here. I definitely am not putting them on the block. We would listen to offers, but there is no intention of selling.

However, the current maneuver is believed to be an interim action designed to set up a one man front for sale negotiationd.

A meeting of the board of directors had been called for June 20 to elect a fifth member. Present members are Allyn, Greenberg, Comiskey, and Frank Curran, father-in-lae of Comiskey.

Allyn said that Greenberg and Al Lopez, field manager, will be in complete charge of the club. Allyn continued:

There wil be no dictating to them. While I’m a fan, I do not know the intricate workings of baseball. Of course, they’ll keep me informed. We’ll attempt to maintain the wonderful job Bill has done the last two years. We’ll miss him, but Im not confident we have the staff to continue presenting interesting baseball. I like Bill’s promotion. Baseball is a grand sport and the fans should have fun, too.

Allyn, whose father was an associate of Veeck when he operated the Cleveland Indians and ST. Louis Browns, had no interest in baseball until he joined the Veeck group in 1959.

The following table reflects the performance of the team based on ownership. Since the process of selling a team can take several months, the records are tabulated based on the previous owner’s last and the new owner’s first completed season. The Avg. Position column is a weighted position calculation based on the percentage of teams finished below of the rest of the teams in the league/division. For example, a first place team would have finished 100% above the rest of the league/division, while a last place finish, the team finished 0% above. Since the number of teams in each league/division varied through the years, a weighted calculation was performed using the units as shown on the right.

1 The purchase by William Veeck of Mrs. Dorothy Rigney’s 54 per cent of the White Sox stock for $2,700,000 was consummated on the morning of March 10, 1959. Veeck’s syndicate included Hank Greenberg and five investment bankers. 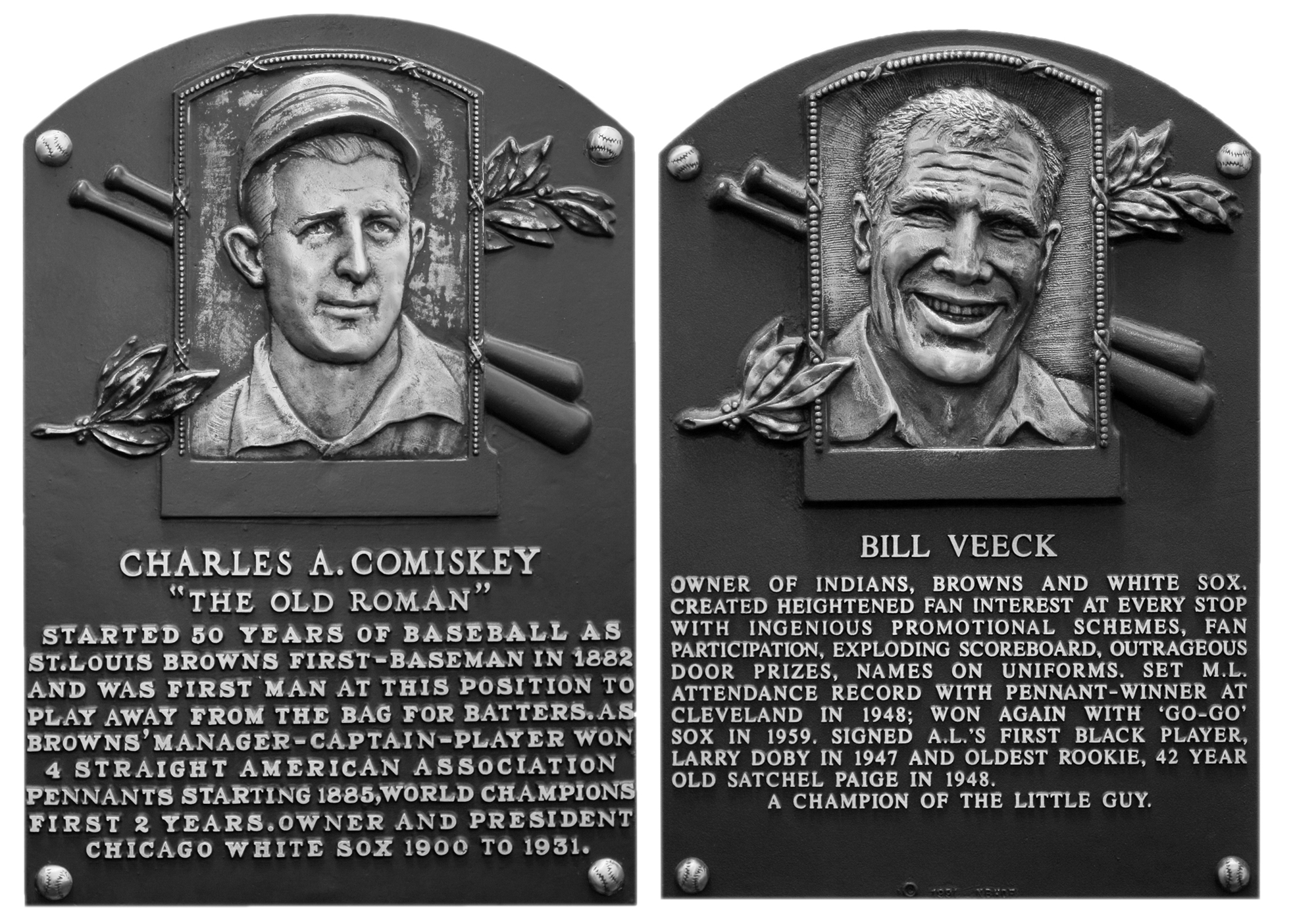