On Friday, August 25, 1922, in what was then called Cubs Park, the Chicago Cubs and Philadelphia Phillies managed to set the post-1900 record for runs scored in a single Major League Baseball game at 49 runs. The final score stood in favor of the local squad at 26-23. This record still stands today.

Nineteen of the forty-nine runs were unearned, and that the Phillies were able to cross the plate on 23 occasions without the benefit of a home run and managed only six extra base hits.

One more thing. In 1930, the Chicago Cubs set the Major League record by scoring more runs (218) against one club—Philadelphia—than any other team. 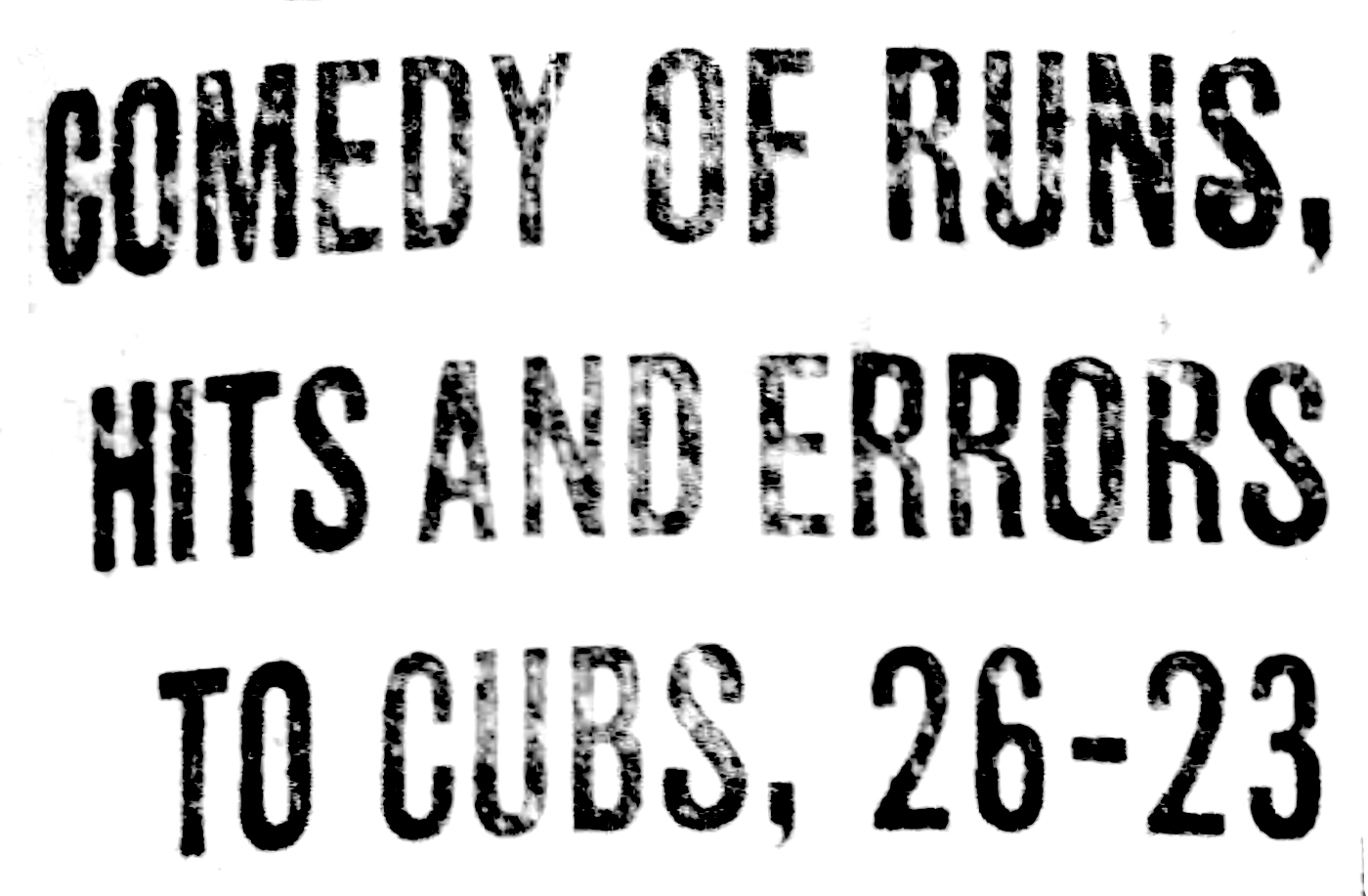 BY FRANK SCHREIBER
Nobody will ever know without many hours with the box score and a record book just how many records of ancient and modern major league records were smashed at the north side park yesterday. Cubs and Phillies hooked up in what was advertised as a baseball game, but early proved to be a comic opera arranged to the tune of base hits.

More than 7,000 fans sat through the nightmare wrecking their brains as to who was winning and it was only after moments of figuring at the end of the nine hectic rounds that the game was adjudged the property of the Cubs by a 26 to 23 score. In fact, many of the fans who saw the finish of the battle had visions of the opening of the football or basketball seasons, for cries from various parts of the park were imploring for a “touchdown,” while others besought the players to “shoot another basket.”

One Record Safe.
Only one record for a nine inning game, the putout record, was safe. Following is a list of some of the marks made or equalled:

TOTAL RUNS SCORED BY TWO CLUBS—49—The largest score in major league history. On June 12, 1890, Brooklyn and Buffalo scored 41 runs, but the accepted record was held by Chicago and Louisville when on June 29, 1897, Chicago scored 36 runs and Louisville 7.

TOTAL HITS—51—Shatters the record games played since 1900. New York and Cincinnati held the former mark, scoring 49 hitsJune 9, 1901. St. Louis and Cleveland while in the American Association, made 53 hits April 20, 1897. Bases on balls then counted as hits. Chicago had 25 hits and Philadelphia 26 yesterday.

MOST RUNS IN ONE INNING—14—Cubs yesterday tied the record for modern big leagues. The record was made by New York Americans against Washington on July 6, 19xx.

NUMBER OF TIMES AT BAT BY ONE PLAYER IN ONE INNING—3—Marty Callaghan on the Cubs equalled the world’s record when he went to the plate three times in the fourth. He hit safely twice and struck out once. The record is shared by Fred Pfeffer, Tommy Burns, F. Goldsmith, Billy Sunday, P. McCarthy, and R. L. Murphy.

NUMBER OF HITS IN ONE INNING BY CLUB—Eleven in the fourth put the Cubs into a tie for the record held by Philadelphia Americans made against Boston July 8, 1902.

SEASON’S LEAGUE RECORD—Both teams beat the season’s record of 19 runs for nine innings made by Giants.

Heathcote Leads Hitters.
Clifton Heathcote was the leader in the Cub swatting. Cliff took his toe hold seven times at the plate and banged out five hits, including two doubles, and walked twice for a perfect day with the stick. Heck Miller was next in line with four hits and a base on balls in six times up, and tow of Hack’s blows were home runs. The first homer in the second inning cleared the iron fence in center field, while the second four base knock cleared the wall in right field.

Tony Kaufman, George Stueland, Uel Eubanks, and Eddie Morris worked on the slab in order for the Cubs, with indifferent success, and it finally settled on Ernie Osbourne to wind up the contest.

Twenty-one Bases on Balls.
Jimmy Ring and Lefty Weinert, the Philadelphia hurlers, endured a terrific mauling. Besides the hits, Cub pitchers doled out eleven bases on balls. Philly hurlers gave out ten and hit one Cub batsman. Four errors were committed by each team.

The first inning was the only one that resembled a ball game. The Bears jumped off to a one run lead in the opening frame, but the Phils came back with three in the second, which were scored with the aid of two errors. Then came the Cub second and ten runs.

NOTE: In modern records, Callaghan was charged with an error, so the errors total for the Cubs was 5, and the Phillies made 25 hits. 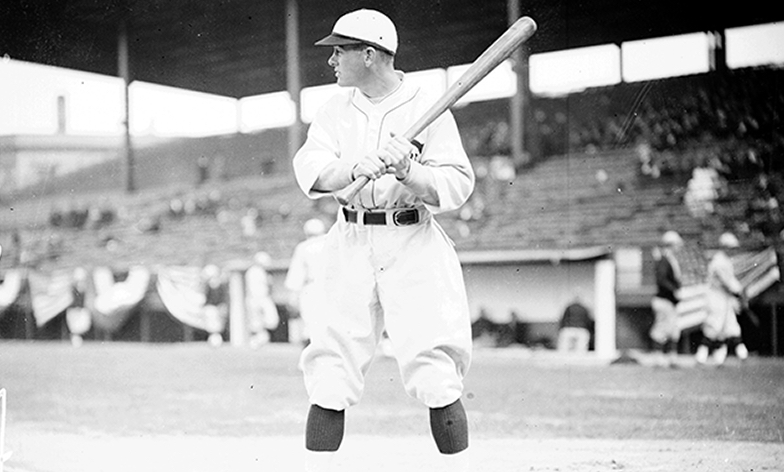 The only Wrigley game that’s come close to this in recent years was the famous 23-22 loss, also involving the Phillies, on May 17, 1979.

The umpires for this game were:

MLB umpires were on strike from the beginning of the 1979 season until May 18th—one day after this game. Teams found local umpires and other fill-ins; Slickenmeyer, for one, umpired regular-season games during strikes in 1979, 1991 and 1995 and also worked the first two games of the National League Championship Series in 1984 at Wrigley Field. He managed to parlay that fame into a role as an umpire in the 1992 film “Rookie of the Year”. 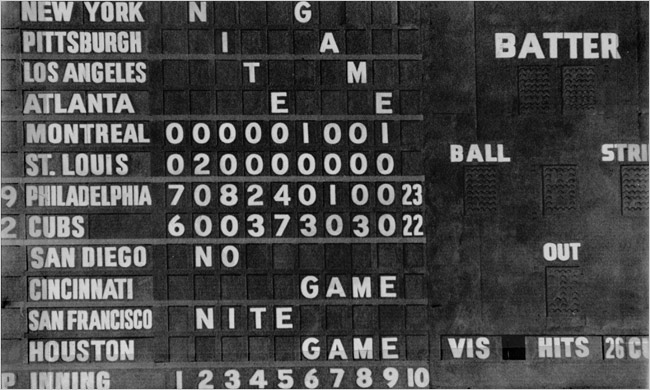