STAGE IS SET FOR CUB SALE

Weeghman and Associates to Turn Over $500,000 to Taft Representative To-Day; Deny Hitch

To-day is the day set for the “official transfer” of the Chicago National League baseball club from Charles P. Taft to Charles H. Weeghman and associates. And the transfer will be made at high noon, or shortly thereafter. The stage is all set, the actors are ready—and so is the money. Charles Schmalstig of Cincinnati will represent Taft, while the local syndicate’s part of the program will be looked after by Weeghman. The Taft representative arrived yesterday and is ready lor the ordeal, it accepting half a million dollars is an ordeal.

Weeghman asserts there will be no hitch in the deal. And it is hard to see how there cotild be when folks like J. Ogden Armour ard William Wrigley, Jr., are interested- It was rumored on the West Side yesterday there was a hitch somewhere. But the West Side was all wrong, according to Weeghman. “We didn’t close the deal to-day simply because we couldn’t get to it,” said Weeghman last night. He added the transfer positively will be’ made to-day. 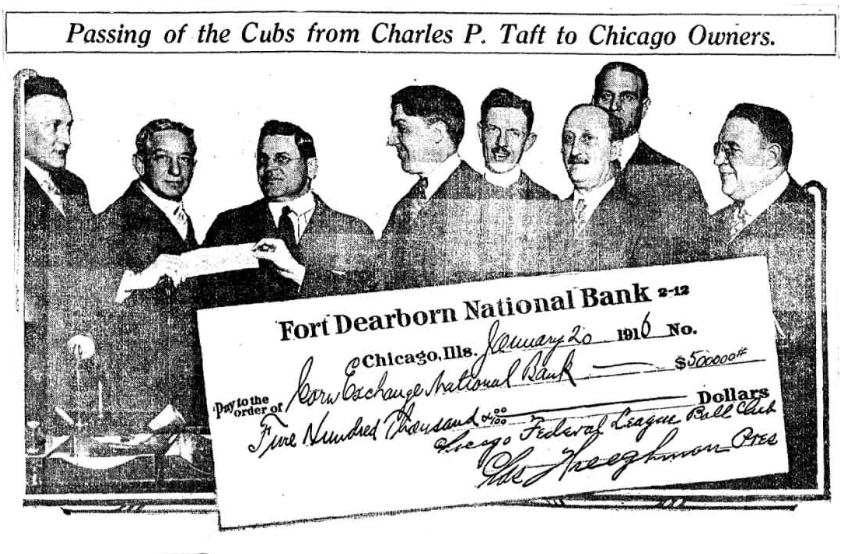 A. D. Lasker, former chairman of the United States shipping board, has sold his large holdings in the Cubs, Chicago’s National league ball team, to William Wrigley Jr., the other majority stockholder, It was learned yesterday.

The transaction took place some time ago (about 1921), but there was no announcement at the time. Mr. Lasker made it clear that there had been no misunderstanding between himself and Mr. Wrigley in any degree.

Lasker Still a Director.
“Mr. Wrigley und I have been warm personal friends for many years,” Mr. Lasker said. “We still are the warmest of frlenda and, although I have sold him all but a few of my shares in the Cubs, I still hold a place on the board of directors and am a trustee of the club.”

In connection with the sale it wan reported that a perfectly friendly difference of opinion existed between Mr. Wrigley and Mr. Laskcr concerning the methods of training the Cuba.

Mr. Wrigley, it was said, was for the less formal ways of whipping the players into shape annually, although ho demanded when they got on the field that they must exhibit championship baseball. 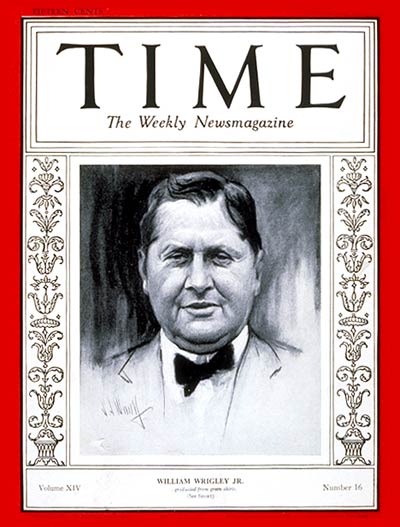 Sought Rigorous Training.
This, it was reported, was not Mr. Lasker’s method. The former chairman of the shipping board, believed In the more Spartan training, the rigorous, denying, self-sacrificing grind was what he thought built up the fiber and sinews of the playero until they were invincible on the field. This reported difference of opinion was denied, however.

“Please make it plain that that is not so,” said Mr. Lasker.

“It was all very amiable,” explained Mr. Lasker. “I simply went to Mr. Wrlgley and I said to him: ‘Bill, I’m not a baseball man and I don’t understand thLs stuff the way you do. Maybe, my views are all wrong. You buy me out or I’ll buy you out. Let’s one of us run this ball team to suit himself.'”

Sold Slock at $150.
Mr. Lasker then said he made Mr. Wrlgley a proposition. He offered to buy all Mr. Wrigley’s stock in the Cubs for $200 a share or to sell all his holdings to the latter for $150 a share. He said he knew that Mr. Wrigley was highly interested in baseball and that he would rather buy Mr. Lasker out at $150 a share than to sell to him at $200 a share, and that was why he made Just such a proposition to his friend, Wrigley.

Mr. Wrlgley could not be interviewed on the matter; he is on the high seas on his way home from Europe on tho Leviathan. He is said now to hold about 75 per cent of the stock In the Cubs, and although the team has not been a pennant winner in recent years, it la said to be one of the most popular In the league, a drawing card always, and a money maker.

William’ L. Veeck, president of tho Cubs, and Adolph Splelmann and W. M. Walker, merchant and commission men. are the minority stockholders.

CHICAGO CUBS ARE SOLD BY WRIGLEY TO TRIBUNE CO. FOR $20.5 MILLION

The Chicago Cubs, one of major league baseball’s least successful franchises on the field in recent years, were sold yesterday for $20.5 million by William Wrigley to the Tribune Company, parent of The Chicago Tribune and The Daily News in New York.

In announcing an agreement for the transfer of his 81 percent ownership and all remaining 1,900 shares in baseball’s only publicly owned corporation, Mr. Wrigley, a Chicago chewing gum manufacturer, ended a family association with the National League team that began when his grandfather became a minority shareholder in 1916.

That family tie, which was strengthened when the grandfather acquired a majority interest in 1921, was the oldest in major league baseball.

The sale of the Cubs, which includes Wrigley Field and all the team’s debts, was the second involving a Chicago baseball franchise this year. Last January a Chicago-based group purchased the White Sox for $20 million.

The record price for a baseball franchise was paid a year and a half ago by a group headed by Nelson Doubleday which bought The New York Mets for $21.1 million.

Mr. Wrigley cited as factors in the sale estate tax problems following the death of his parents in recent years and attempts to find a solution to the long-term financial needs of the Cubs. The Cubs lost $1.7 million last season and are reportedly headed for even greater losses this year.

“Baseball is becoming more demanding of tremendous financial capacities,” William J. Hagenah Jr., the president, chief operating officer and treasurer of the Cubs, said by telephone from Chicago. “You’ve got to just have an awful lot of money to play ball these days. That’s what prompted these changes.”

Mr. Hagenah said negotiations for the Cubs’ sale began long before the current strike that has idled the sport’s 26 major league teams. The Cubs have the worst won-lost record in the National League this year.

The sale is subject to the approval of the club’s directors, its 600 stockholders, the National League and the Securities and Exchange Commission. The Cubs’ stock was valued yesterday at between $1,400 and $1,500 a share. If the sale is approved, the stockholders, some of whom have held their shares for generations, will receive about $2,000 a share. pick up first ad cubs.

Commissioner Bowie Kuhn, who objected to one attempted ownership chnage for the White Sox last year, issued a statement yesterday that praised the role of the Wrigley family in baseball. Mr. Kuhn offered no comment on the Tribune Company’s purchase, but last year he supported the sale of the Oakland A’s to executives of another corporate giant, Levi Strauss & Company, for $12.7 million.

“The Wrigley family, first with Phil and later with Bill, has been very dedicated to the best interests of the game,” Mr. Kuhn said, referring to William Wrigley and his father. “For over 60 years, indeed from the time of the first commissioner, Judge Landis, they have vigorously supported the integrity of the game. While they have gone through thick and thin days on the field, their franchise has produced some of the game’s premier players—people like Gabby Hartnett, Billy Herman, Hack Wilson, Billy Williams and Ernie Banks. They have always been first-class executives for baseball.” Team Can Be Highlighted

The Tribune reported last month that first-quarter earnings had fallen 25.8 percent from the first three months last year despite a 13.2 percent revenue increase.

The Cubs lost $1.7 million last year, according to Mr. Hagenah. But the ”intrinsic value” of owning a professional sports franchise has drawn renewed interest by corporations in recent years. Although mired with a losing record, the Cubs play in a populous market, and they have a long baseball tradition. Further, the Tribune Company’s ownership of cable television subsidiaries, in addition to newspapers and radio and television stations, offers opportunities to highlight the team.

The purchase is not the first of a baseball team by a communications company. CBS purchased 80 percent of the New York Yankees for $11.2 million in 1964 and maintained the controlling interest until George Steinbrenner led a group of investors who purchased the club for $10 million in 1973. In addition Ted Turner, owner of the Atlanta Braves, is the head of cable television network. Conflict of Interest?

William Jones, the managing editor of The Tribune newspaper, said yesterday that he saw no potential conflict of interest over coverage of a baseball team owned by the parent company.

“It is not going to affect our coverage in any way whatsoever,” Mr. Jones said. “The Tribune owns WGN, and there’s never been any pressure on our television columnist.”

Radio station WGN has been the flagship station for the Cubs’ radio network since 1924. WGN-TV began televison coverage of the Cubs in 1948.

Stanton R. Cook, the president and chief executive officer of The Tribune Company, said in a prepared statement that the newspaper and WGN would continue an independent coverage policy.

“As a life-long resident of the Chicago area, I am aware and respectful of the great tradition of the team and the National League,” Mr. Cook’s statement said. Will There Be Lights?

Tribune Company officials were not available to comment on whether the shift in ownership would bring the installation of lights to 37,000-seat Wrigley Field. The Cubs are the only team without lights at their home ball park, and Mr. Wrigley had resisted efforts to install them, an addition that critics contend might have improved home attendance figures that fell from 1,648,587 in 1979 to 1,206,776 last season.

Andrew J. McKenna, a director of the Chicago White Sox from 1975 through 1979, was named as chairman of the Tribune’s new subsidiary that will operate the Cubs.

President Reagan, who as a young man was a broadcaster of Cub games, was quoted by an aide as having said yesterday,

It’s the end of an era, but hopefully the beginning of another era.

The following table reflects the performance of the team based on ownership. Since the process of selling a team can take several months, the records are tabulated based on the previous owner’s last and the new owner’s first completed season. The Avg. Position column is a weighted position calculation based on the percentage of teams finished below of the rest of the teams in the league/division. For example, a first place team would have finished 100% above the rest of the league/division, while a last place finish, the team finished 0% above. Since the number of teams in each league/division varied through the years, a weighted calculation was performed using the units as shown on the right.

1-After the 1905 season, Murphy purchased the Cubs from Jim Hart, in a bid financed by a loan from Charles Phelps Taft, owner of the Enquirer. Murphy repaid the loan in full with the profits from the 1906 season
2-To raise capital, Weeghman formed a 10-man syndicate of Chicagoans, one of whom was William Wrigley, Jr.
Albert Lasker was allegedly the largest holder in 1916 at $150,000. On December 11, 1916, William Wrigley Jr. bought a $15,000 block of Cubs stock. His holdings at the time was $165,000.
3-According to Warren Brown in his book, The Chicago Cubs, Wrigley bought 888 shares from Mr. Lasker and 500 shares from Mr. Armour in 1921.
4Tribune sale of the team finalized on June 15, 1981 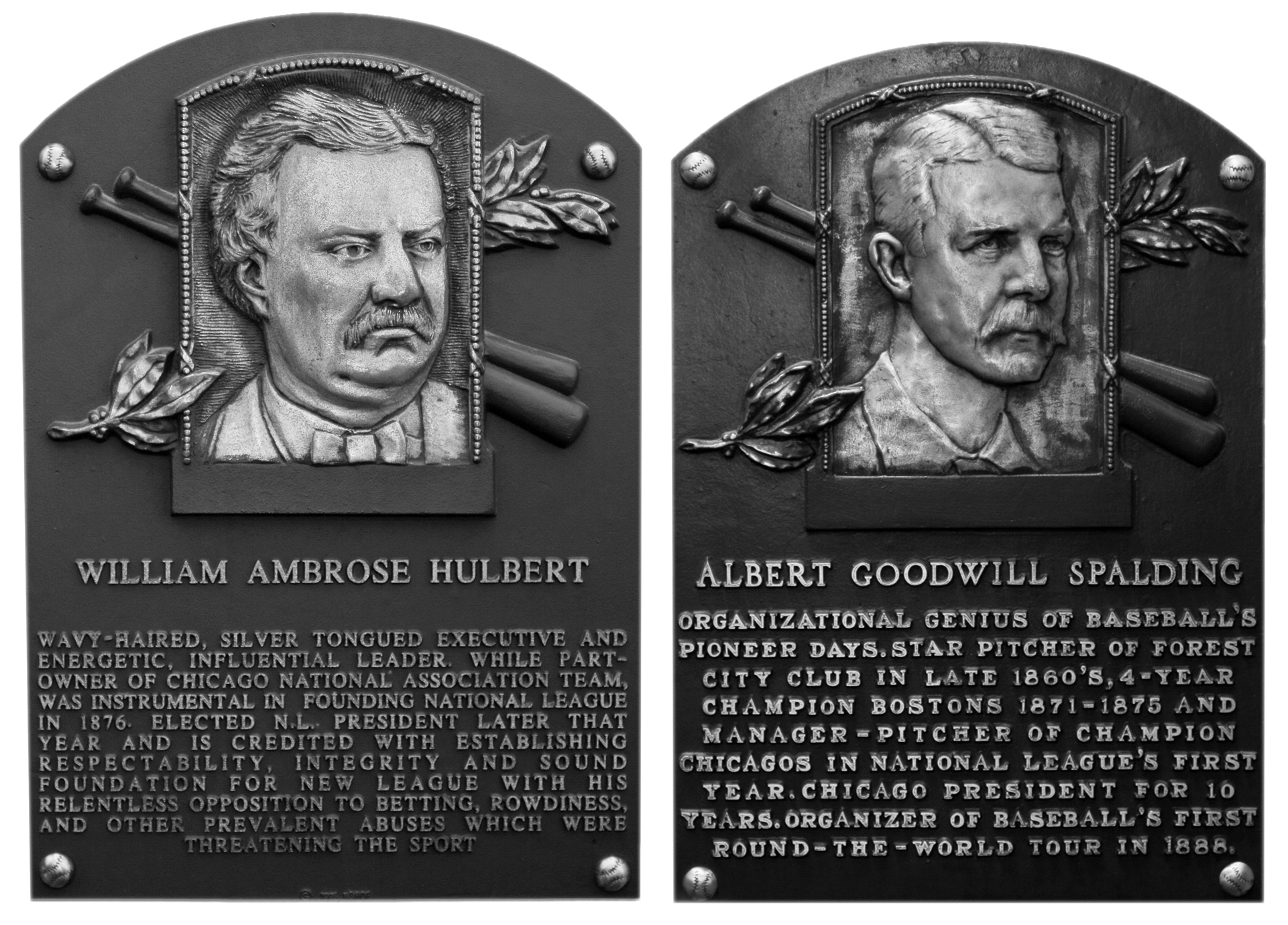