To that end, the very first City Series in 1903 was marred by accusations of games thrown. Cubs pitcher Jack Taylor won his first City Series start, but lost the last three (the series finished in a 7-7 tie); subsequent accusations that he laid down for side money precipitated a trade to the St. Louis Cardinals. As a result, the Cubs refused to play the 1904 series.Cubs (Colts) President Hart in explanation of his team s refusal to play a 15th game said Tinker was to be married In Kansas City that afternoon and absolutely refused to postpone the wedding. Kling insisted on along with him, and Evers was to leave for home at 5:30 the day of the last game, so there was no chance of patching up a team without them.

NOTABLES
Only 3,142 freezing fans watched the Cubs’ Mordecai “Three-Finger” Brown pitch a one-hit gem in the final game of the 1909 series. The only hit was a solid single by Parent over second base in the fifth inning.

The Cubs won 92 games in 1911 while the south-siders were barely over .500. It was expected this series would be a blow-out. It was. But not as expected. The White Sox took all four games.

The White Sox won the 1912 City Series, 4-3, amid similar accusations, that the Cubs who were up 3-0 before losing four straight laid down in protest of unpopular manager Frank Chance.

In 1914, the White Sox won the City Series 4-3 after losing three of the first four games.

The 1924 City Series were the first games ever broadcast on local radio.

No series was played in 1927 because the Cubs did not issue a challenge (the team losing the previous series was expected to initiate a challenge the following year). On September 20, president Bill Veeck, Sr. issued an official statement:

The Cubs will not play a City Series this year. The season of 1927 contained so many splendid possibilities that anything other than a World Series would be an ill-fitting climax. Unless the miracle of miracles happens and the big series is played at Wrigley Field, the work of completing the second deck of the grandstand will start Oct. 3.

The White Sox are satisfied that the City Series will not be played this year. As far as we are concerned, nothing is to be gained by the Sox defeating the Cubs in another City Series. It is up to the Cubs to challenge, that right being reserved for the defeated team in the last series and the Sox trimmed the Cubs in 1926.

The Cubs won the City Series in 1929 and 1930; the only time they ever managed back-to-back city titles.

In 1934, Cubs owner William Wrigley thought the Cubs were laying down in order to earn the higher receipts of City Series play, and refused to play the White Sox.

In the very next season (1936), the White Sox swept the Cubs in the City Series and so infuriated Wrigley that he cut some players salaries and ordered all of his Cubs players placed on the trading block.

The 1940 City Series was the third successive seven game series. The White Sox won all three.

The 1942 City Series was the eighth consecutive city title for the Southsiders and the last City Series. 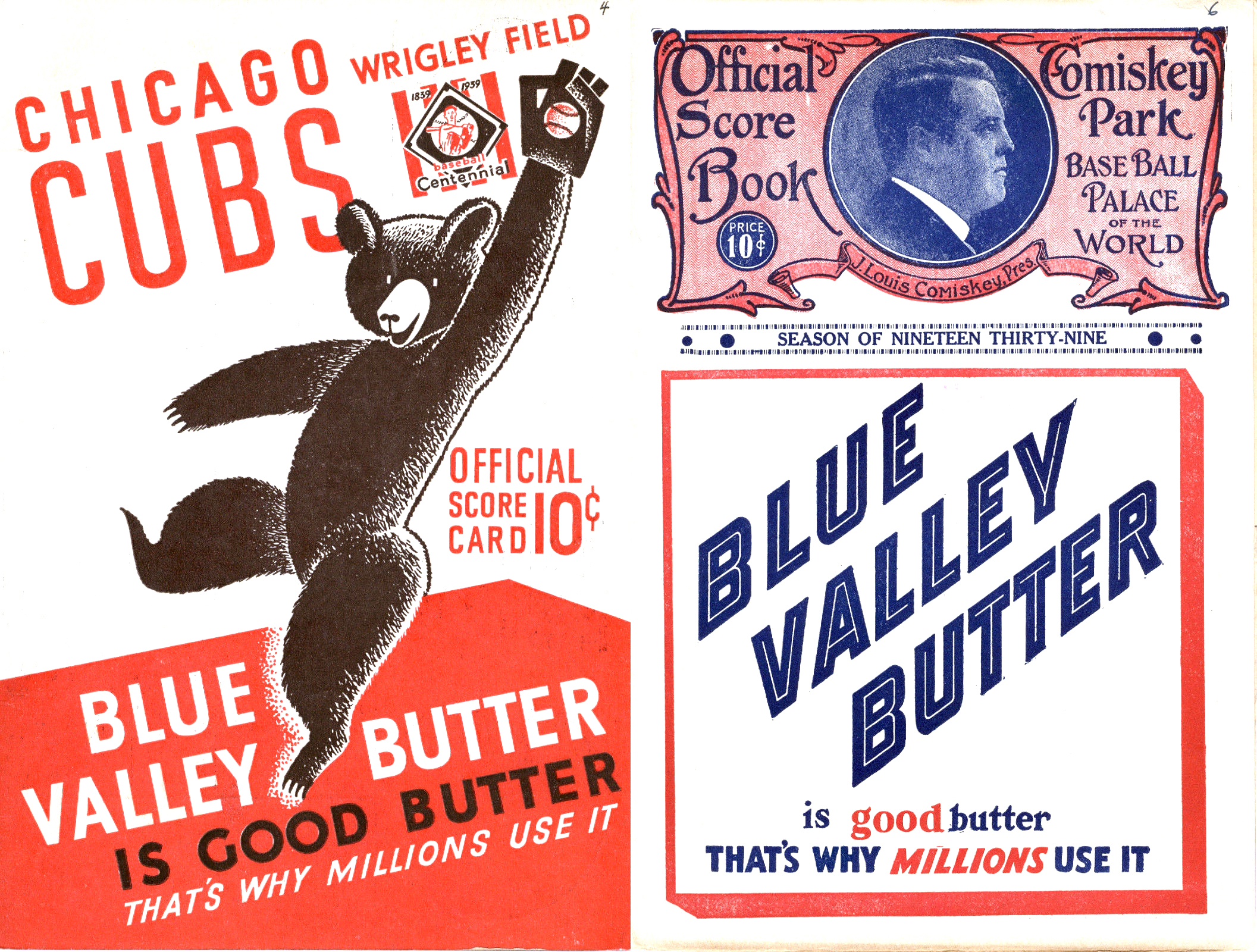 CHICAGO’S (1909) CHAMPIONS AND THEIR VICTORIOUS SMILES THEY WAITED THREE YEARS TO SPRING. 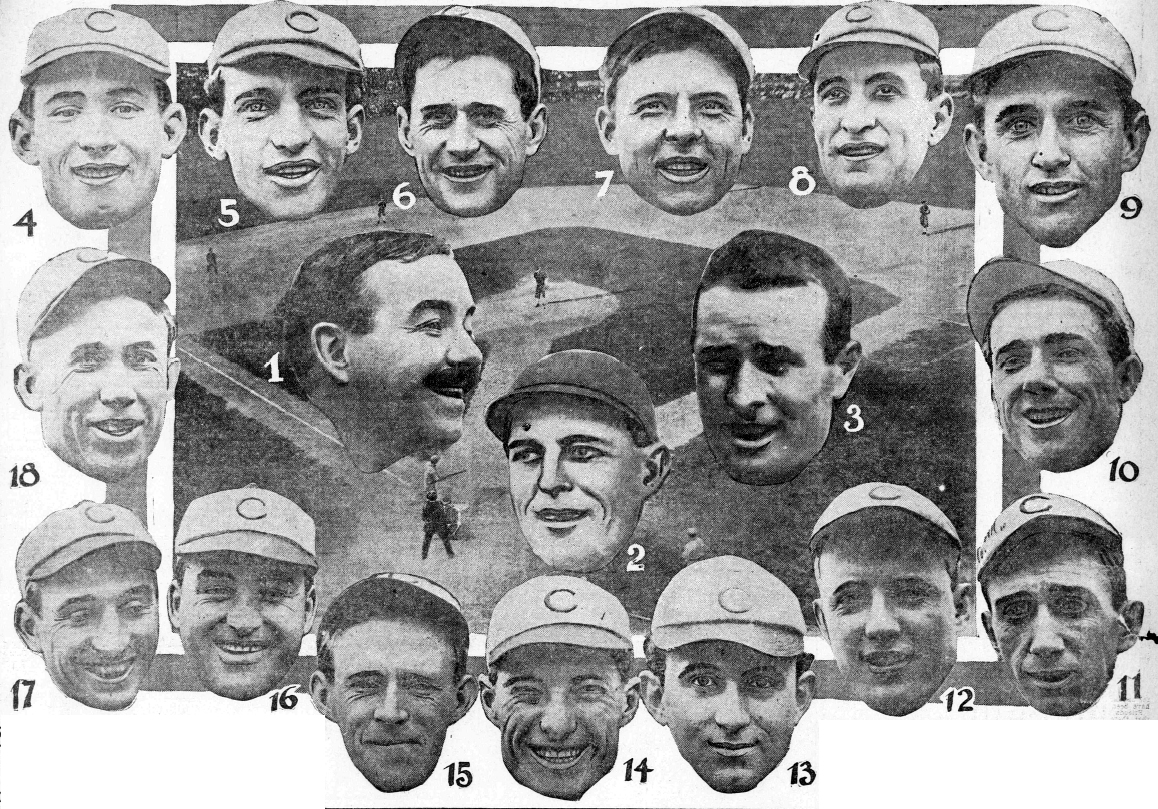 Regular season inter-league play was discussed for baseball’s major leagues as early as 1903. Other proposals were introduced in the years 1933, 1958, and by Bill Veeck in 1963. It wasn’t until June 12, 1997 that the first inter-league game was played. Certain inter-league matchups are highly anticipated each year, due to the close geographic proximity of the teams involved. Many cities, metropolitan areas and states contain at least one team in each league (Chicago, for example). In of each of these “rivalry” matchups, the two teams meet annually for four games, two in each ballpark. Prior to 2013, there were six games between the two teams, three per ballpark 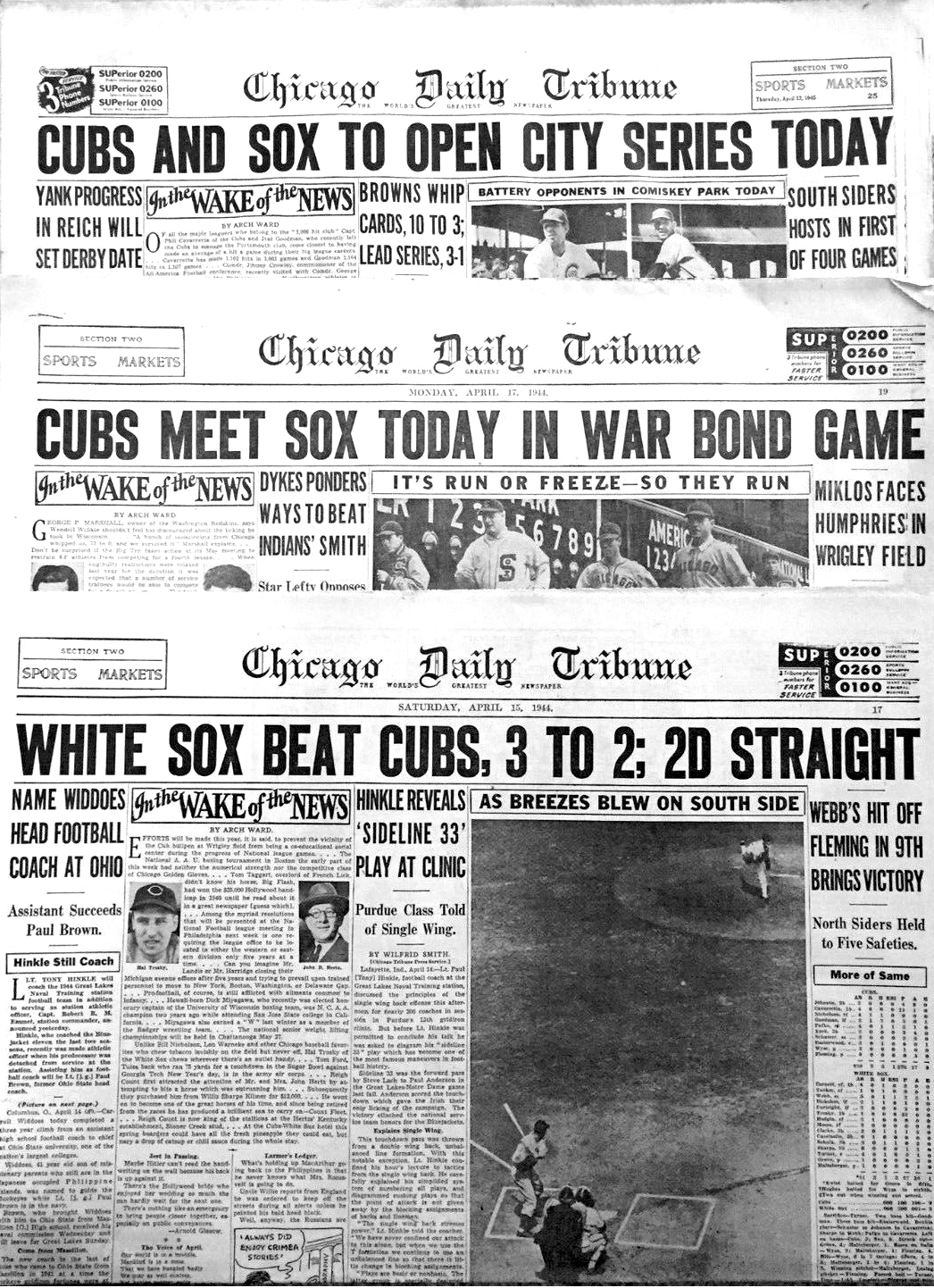 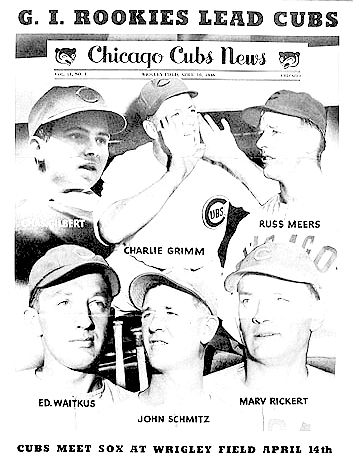 April 12, 1945—Cubs 15, at White Sox 3
April 13 and 14 Games cancelled due to the death of President Roosevelt.
The second and final game of the series was called off due to cold weather.
Cubs win series 1-0 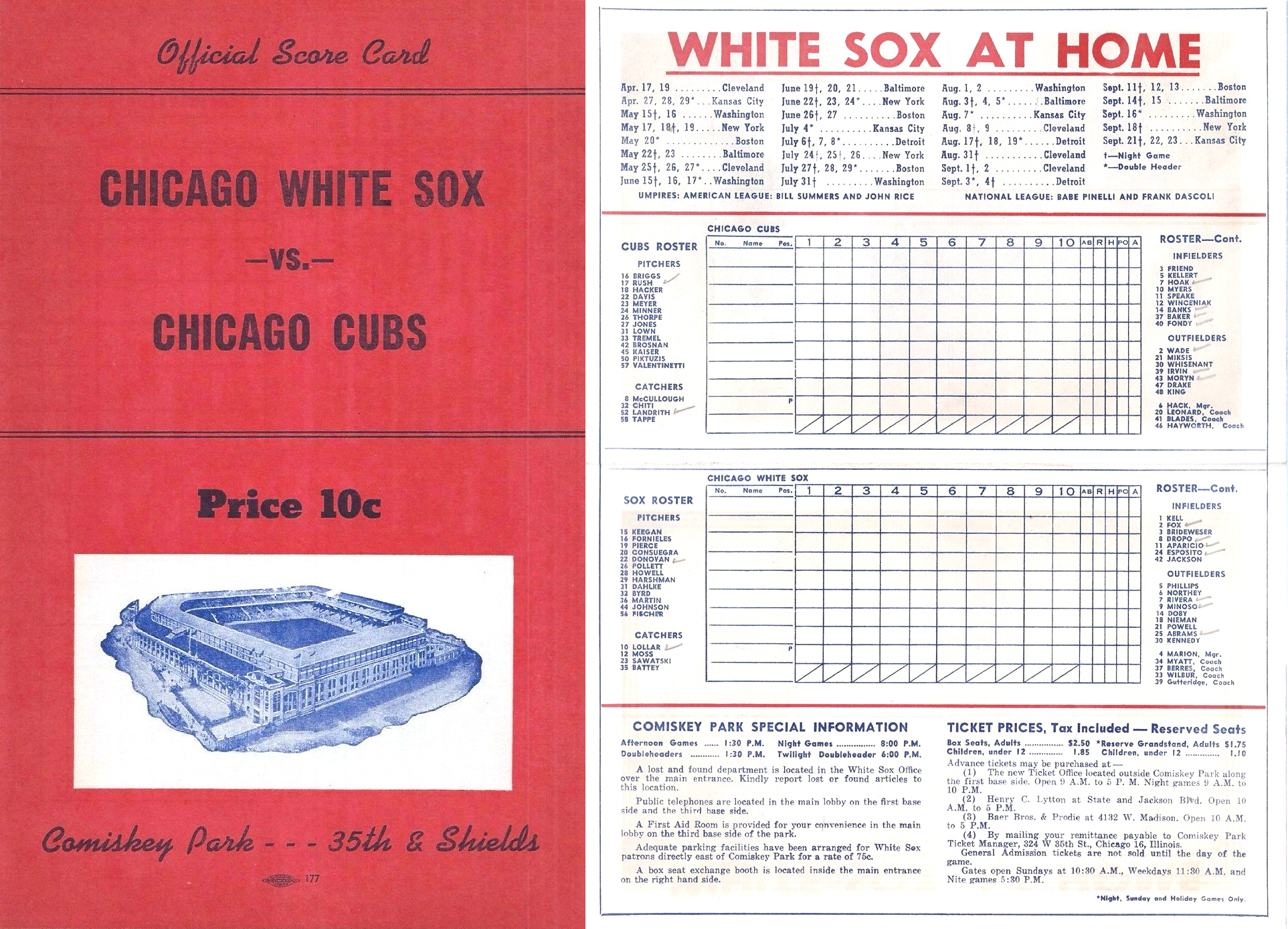 Boys Benefit Game (1949-72)
In 1949 the management of the Cubs and the White Sox inaugurated a benefit game in mid-summer to raise funds for the Chicago Park District for boys’ baseball. These games were generally enthusiastically received and well attended. The first, a night game on July 11, 1949 in Comiskey Park, attracted 36,459 fans and the Cubs, behind the pitching of Johnny Schmitz won, 4-2. A White Sox vs. Cubs-best 52,712 came to the June 25, 1964 game at Comiskey Park, won by the Pale Hose, 11-1. Fans were allowed to stand in the outfield during that game. The last of these was played August 14, 1972 with the Cubs again the winner. In all, this series of benefit games resulted in 13 victories for the Cubs and ten for the White Sox.
Cubs win series, 13-10

Mayors Series (1981)
Chicago mayor Jane Byrne proposed a revival of meetings between the two teams. August 7th game at Comiskey Park was a scoreless tie, while the next day the Cubs knocked off the White Sox, 4-3.
Cubs win series, 1-0-1

Exhibition Play (1982)
In 1982, both the crosstown exhibition games scheduled were cancelled…because of snow.

Windy City Crosstown Classic (1985-94)
One-game sets were agreed upon to benefit team charities. The White Sox went 8-0-2 in these games, which alternated between Comiskey Park and Wrigley Field.
In the April 17, 1994 game at Wrigley Field, Michael Jordan started in right field for the White Sox and went two-of-four with two RBI in the 4-4 tie.
White Sox win series, 8-0-2

Tribune Twinbill (1995)
The Chicago Tribune sponsored a home-and-home series before the labor-delayed start of the 1995 season. Its holding didnt fare so well, as the Cubs lost to the White Sox 6-3 on April 24 at Comiskey Park and 6-2 on April 25 at Wrigley Field.
White Sox win series, 2-0