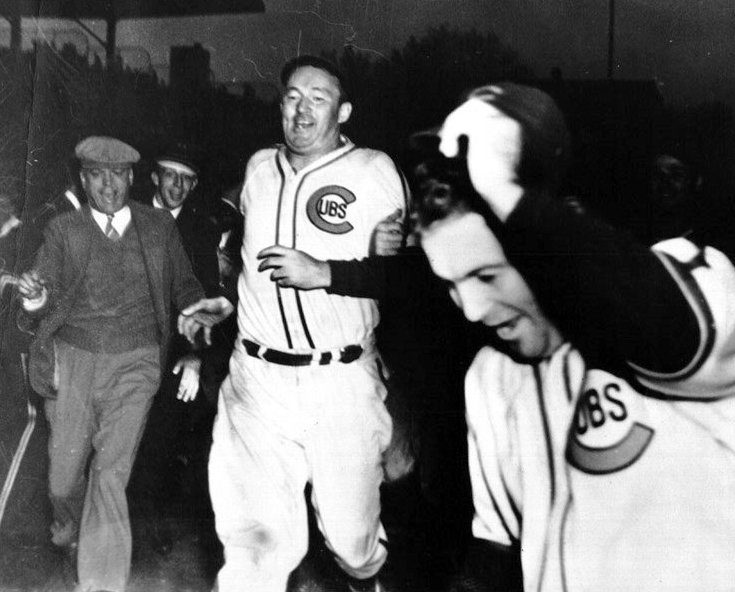 There was drama in Wrigley field as the Cubs won the pennant in 1929; there was more of it when they won for Charley Grimm in a late drive in 1932, and there was plenty of it when the Cubs became champions by winning twenty-one straight in 1935. But never, never, was there a game like the one Gabby Hartnett won with a homer yesterday to put his team in first place as the Pirates went down, 6 to 5, seconds before the contest was to be called a tie, on account of darkness.

The 34,465 fans would have been more than satisfied to see Gabby bust up a drab game. But that homer topped off as thrilling an afternoon as any sports carnival could produce. Mob ecstasy was choked by bitter disappointment, only to be sup- planted by more ecstasy with more disappointment. Heroics nipped in the bud, opportunity hammering and not being heard. Gents thrown out at the plate. Nothing perfect, until Old Gabby rose up in the falling night and banged that homer.

He’s a Hero or Heroes.
You have seen them rush out to greet a hero after he touched the plate to terminate a contest. Well, you never saw nothin’. The mob started to gather around Gabby before he had reached first base. By the time be had rounded second he couldn’t have been recognized in the mass of Cub players, frenzied fans, and excited ushers but for that red face, which shone out even in the gray shadows.

After the skipper finally had struggled to the plate things became worse. The ushers, who had fanned out to form that protective barrier around the infield, forgot their constantly pretty maneuver and rushed to save Hartnett’s life. They tugged and they shoved and finally they started swinging their fists before the players could carry their boss into the safety afforded by the tunnel behind the Cub dugout. There was new hysteria after Gabby reached the catwalk whicht leads to the club house. But by this time the gendarmes were organized. Gabby got to the bath house without being stripped by souvenir maniacs. 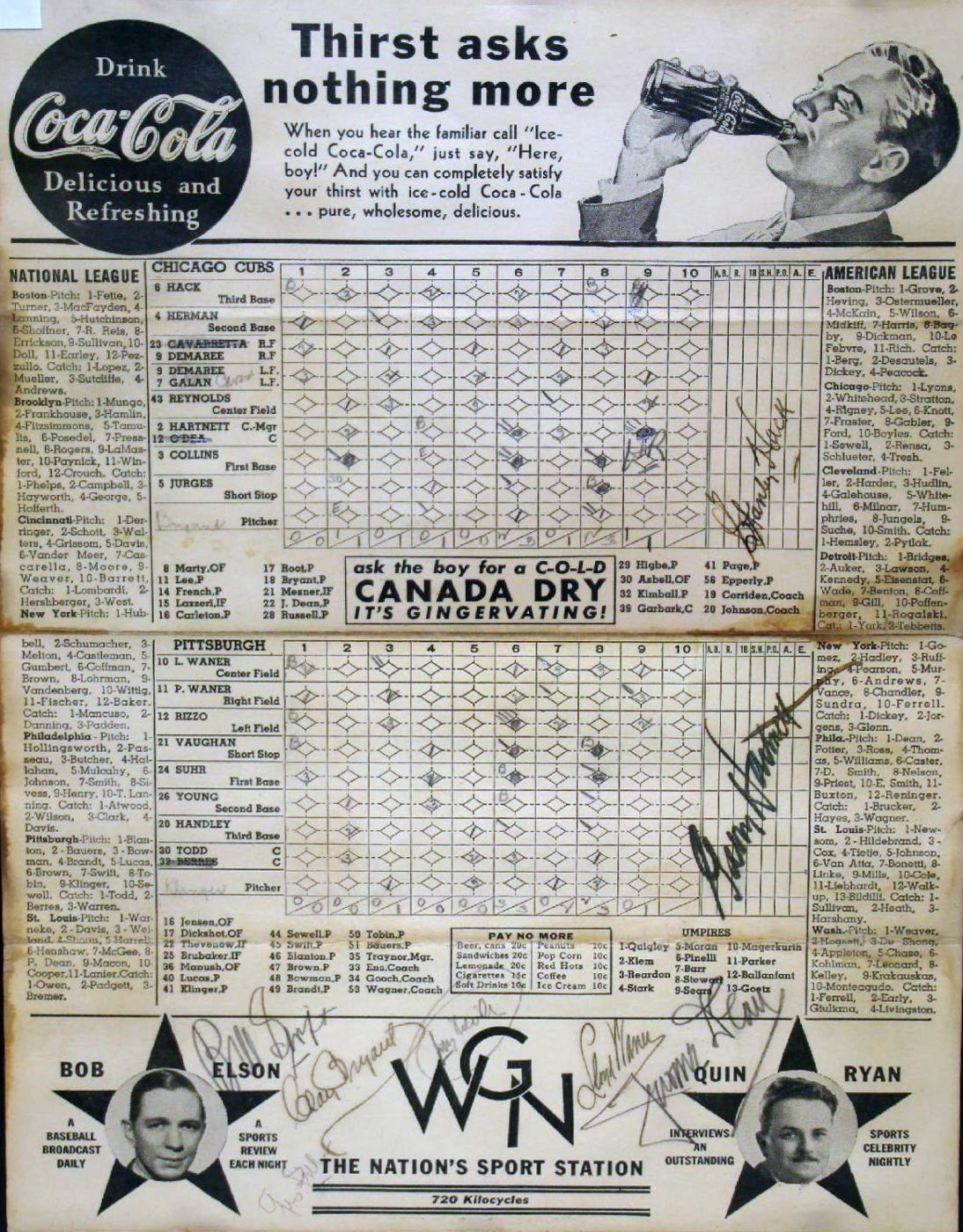 Boot Is the Winner.
And who was the sixth and winning pitcher? No one but old Charley, who, with Hartnett, forms the oldest battery in baseball. Charley tamed the Pirates in the ninth, helped out by Hartnett, who threw out Paul Waner to retire the side after Paul had presumed to try a theft of second.

There’s a whole lot to tell you about things that happened before the sun went down. And sooner or later we’ll settle down to the telling of it. But for the purpose of the narrative, right here we are going to jump in with the Chicago sixth, immediately after the Pirates had grabbed a 3 to 1 lead, and, most folks thought, the 1938 National league pennant.

At the start of this home sixth Gabby plucked the first leaves from his laurel wreath. He opened with a double and scored on a double by Collins. Jurges singled and O’Dea failed in a pinch role, but the tying run came home on a force play. This big chance to go ahead failed when Jurges was out trying to score from second on a single which he thought had gone into left field, instead of landing in Vaughan’s glove in deep short.

The 3 to 3 tie prevailed through the seventh. But gloom was thicker than, the gathering dusk when the Pirates, in the eighth, assaulted Vance Page, Larry French, and Bill Lee before the Cubs’ third double play halted the rough-housing with two runs in. 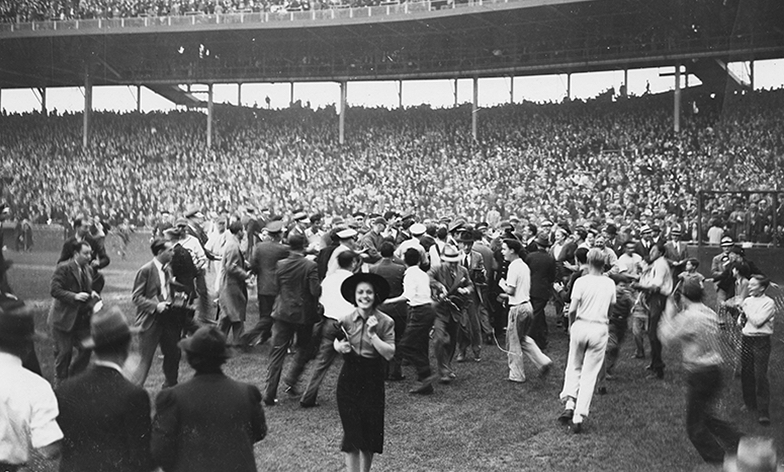 It Looked Hopeless.
The Pirates’ eighth inning was over. But the Pirates were leading, 5 to 3, and it, was rapidly getting dark. Things- looked terrible.

Collins, however, led off the Chicago eighth with his third hit. Bill Swift re placed Klinger and walked Jurges. Tony Lazzeri batted for Lee. tailed In two attempts to sacrifice, thun doubled to right, Collins and putting Jurges on third. Marty was sent to second to run for and Hack was given an Intentional pass, loading the bases with none out. Herman singled to right, scoring Jurges with the tying run, but Marty was thrown out at the plate by Paul Waner. Mace Brown replaced Swift, Then came the play that had become a slogan of early Cub failures this year. “Demaree tapped into a double play.”

A tie, yes. But it was really dark now. One more inning and a double-header, with possibly more darkness trouble, this afternoon. More gloom.

Old Charley Comes In.
Root came in. L. Waner flied to Cavarretta. It must have been Cav arretta, though you could hardly see him from. the press stand. Paul Waner followed with a single to left Rizzo, the boy who “won the pennant for the Pirates,” was up. He fouled to Hartnett. While Root was pitching to Vaughan, Paul Waner started a dash to second. Hartnett never threw with more deadly aim it was only a question of the shot would tear off Jurges glove. Jurges took the throw with skill and grace and retired Paul for the final Pirate out.

Then came the home ninth. Darker darker every second. Cavarretta and Reynolds were soft touches. Brown was firing them in as hard as he could to cash in on the darkness Gabby didn’t seem to see the ball as two strikes whizzed by knee high, The next pitch was a little higher. And the ruddy old gent at the plate focused on it this time. Bang. And away it went into the far reaches of the bleacher in left center. Then followed the unprecedented scene described at the beginning of this piece. 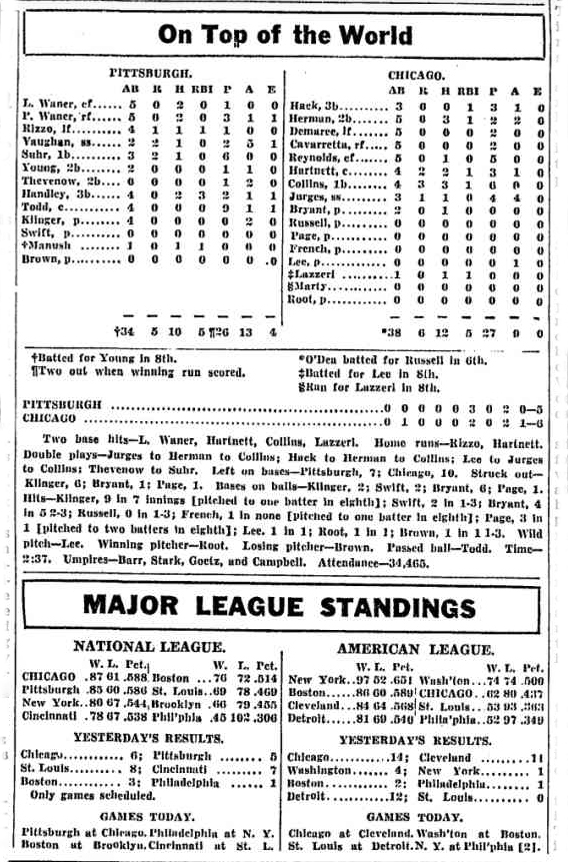 This is how Gabby Hartnett remembered the night as he told WMAQ sportscaster Hal Totten in 1939.

It was very dark by then. But the umpires decided to let us go one more. Charlie Root got through the first half of the ninth all right. In our half Phil Cavarretta hit one a country mile to center, but Lloyd Waner pulled it down. Carl Reynolds grounded out. And it was my turn.

Well, I swung once–and missed; I swung again and got a piece of it, but that was all. A foul and strike two. I had one more chance. Mace Brown wound up and let fly; I swung with everything I had, and then I got that feeling I was talking about–the kind of feeling you get when the blood rushes out of your head and you get dizzy.

A lot of people have told me they didn’t know the ball was in the bleachers. Well, I did–maybe I was the only one in the park who did. I knew it the minute I hit it. When I got to second base I couldn’t see third for the players and fans there. I don’t think I walked a step to the plate–I was carried in. But when I got there, I saw umpire George Barr taking a good look–he was going to make sure I touched that platter. 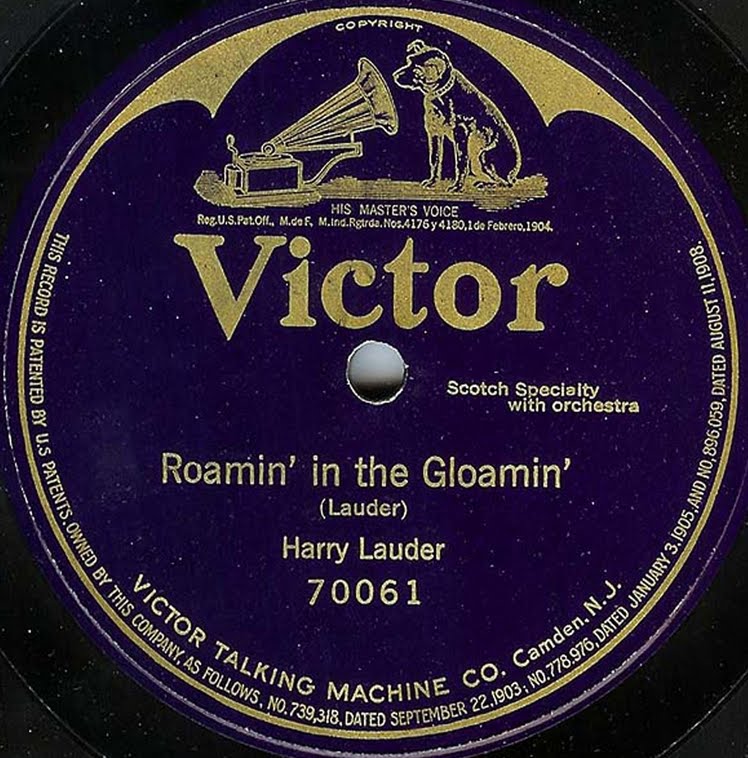