Mordecai Brown, the season’s premier pitcher, came into his own inheritance again yesterday when he locked horns with Nick Altrock for the second time this week in the world’s pennant series and came off victor after a stirring 1-0 battle, full of electric thrills, before the largest crowd yet assembled to see Chicago’s two champion teams in their bitter struggle for glory and coin.

Two hits were all the shy fingered twirler would allow his white legged enemies, and with support which glistened like burnished gold in the welcome sunlight, he held the White Sox back with a steady, unflagging determination to retrieve the honors lost to his handsome slab rival on the opening day of the series. J. Evers, Trojan, shared with Brown, the laurels of the victory. Twice the blond haired stripling came to Brown’s rescue with startling thefts of apparently clean hits, and once cut off a cinch run. From second base to short right field behind Chance, Evers tore up the turf back and forth, and always was found where most needed.

Evers Another Rohe.
Then, when his real chance for glory came, Evers was Johnny on the plate, and his clean shot to left field scored the only tun necessary to cinch victory for his team. Not quite as spectacular, perhaps, but just as effective and timely. Evers’ hit in that seventh inning entitles him to the same same soft nock in the hearts of the National league adherents as Rohe’s triple of the day before won for him in south side circles.

For six innings the Spud rooters, who rallied to the support of their team and fought their way into the White Sox plant to cheer and encourage Chance’s men in their uphill fight for the bunting, saw budding runs nipped at the blossoming point or killed by the frost of Altrock’s icy nerve. Once they saw Hahn, who refused to stay out of the game despite a broken bridge in his frontispiece back up against the steel wire and spear a sure three bagger over the heads of the mob on the circus seats robbing Kling of the hit and the Spuds of at least one run. Four times they had watched Chance’s men lay the foundations of tallies only to see Altrock or his backing tear down their work with consummate skill.

Overtime Battle Threatens
Brown was absolutely invincible and for six rounds held the Sox to a single dafety, made by Hahn of the broken nose. It was getting late in the game, with every prospect of an overtime battle if the break did not come quickly, and it was apparent to all the team which would score the first run would win. The great crowd was growling ominously over its long denied hunger for runs, the constant succession of promises and disappointments fed them, and the tension was becoming so fierce even the rooting was intermittent with periods of anxious waiting between.

Hahn’s Eyesight Fails Him
That was the situation when Chance opened the seventh inning with a low, rakish fly to right. It went far over Isbell’s head and Hahn, not seeing the ball until it struck the ground, had no chance to catch it. Steinfeldt bunted neatly and was thrown out at first by Altrock, advancing Chance, and once more the hungry rooters roared, their appetites sharpened by anticipation. One hit would win the game. Tinker, remembering how he stood the Sox infield on its head in a previous game there with an unexpected bunt, tried the trick again, but Altrock was watching and pounded on the ball like a hawk, retiring Joe at first and holding Chance on third. 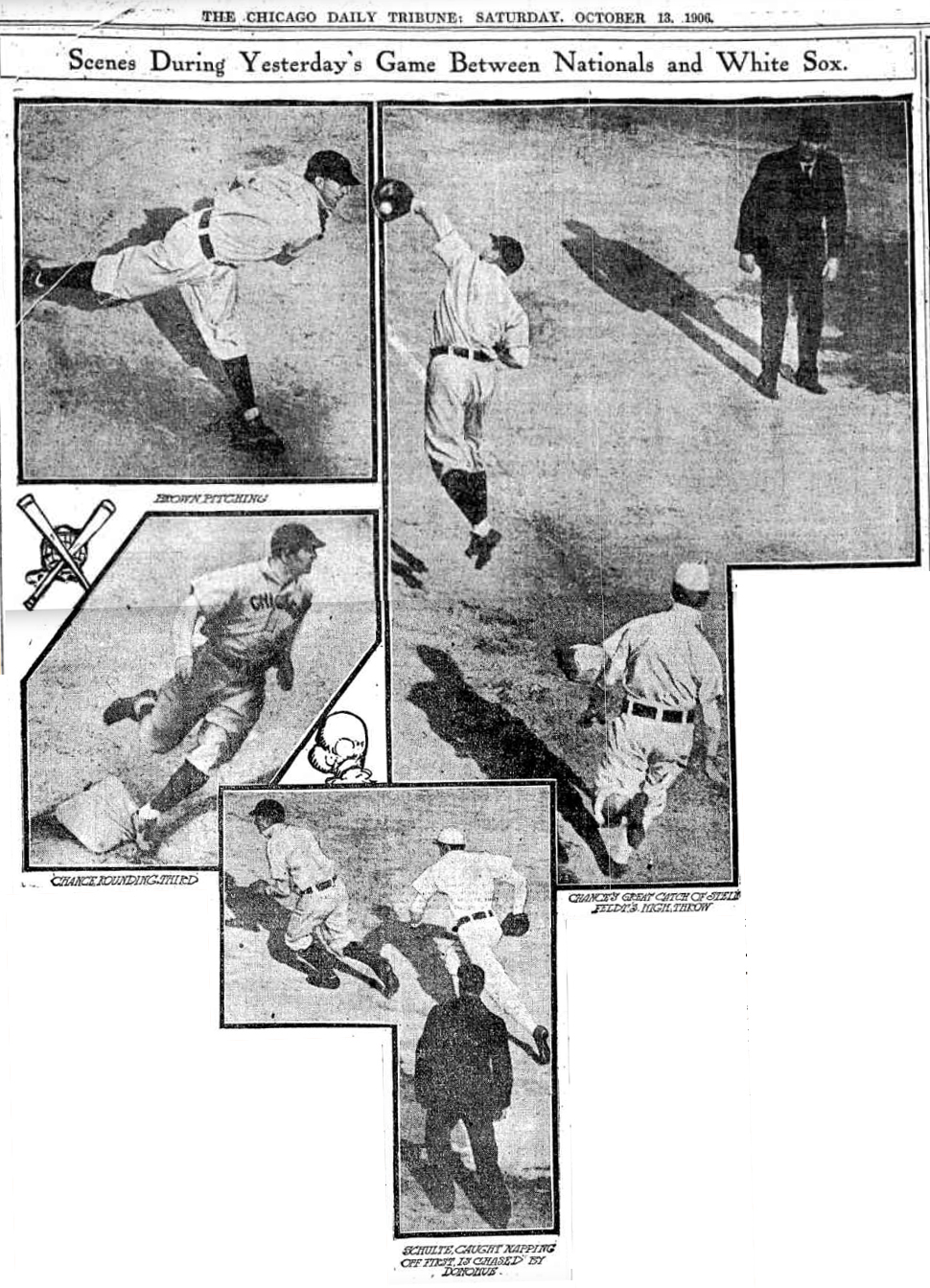 Scenes During Yesterday’s Game Between Nationals and White Sox

Evers Scores His Captain
There were two out, the desperate ruse had failed, and everything depend on John of Troy. Gritting his teeth until all the Celtic blood in him leaped in response and produced a flush of confidence in his cheeks, Evers poised and studied Nick, who smiled back at him confidently. Chance was fretting and pawing the earth around third with impatience and the noise, which had died down with the failure of Tinker’s scheme, swelled to a frantic pitch. Not long did Evers keep Chance or the crowd waiting for he tackled the first kink Altrock gave him, untangled its knot, and sent it straight to Dougherty’s feet—a clean single. Chance finished across the plate almost as soon as the ball touched the ground, and the winning run was in. Instantly from big stands and bleachers, from circus seats and boxes, from inner to outer circumference of the immense circle around the field, there blazed forth a sea of Cub banners and colors and arose a Niagaran tumult of victorious cheering. None doubted that one run was enough to settle for the day the question of supremacy between champions.

Runs Threaten in Eighth
But the Nationals were taking no chances of another blow from Rohe’s bat. With a rush they went after Altrock in the eighth. One was out, when Brown dropped a safety into short center and went to third on Hofman’s wallop to left. Artis sneaking to second on Dougherty’s throw to third. One more hit would put the game on ice with two more runs. But Sheckard’s sharp hit went straight to Isbell, who smothered the ball brilliantly, holding back the runs while he retired Jimmy at first. Then the Sox infield backed up, and Isbell took Schulte’s pop fly, retiring the side.

Chance Tries Hard to Score
Once more in the ninth the Cubs tried to make Brown’s task easier. Chance led this time with a low safe fly to center. Again Steinfeldt advanced him to second with a perfect sacrifice, and for the second time Tinker thought to catch the Sox off guard with a bunt. For the second time Altrock was wide awake and fielded Joe out at first. Chance made a desperate effort to score from second on the play, but was nailed at the plate when Donohue shot the ball back to Sullivan. It was a whirlwind rush Chance made, hoping to catch his opponents off guard, and it required whirlwind handling of the ball to stop him. If Altrock’s throw or Donohue’s relay of it had been anything but perfect the manager would have gained his point. It was a chance worth taking.

Two Sox went out in the last inning, and then at the last minute when the monster rooting machine was slowly squeezing itself toward the exits, it looked as if that hard fought, well earned victory was to be wrenched from Brown’s grasp. Only by a superhuman effort, at the risk of his remaining seven fingers and his countenance, did Brown save his own game.

Brown Saves His Own Game
McFarland batted for Nick, but grounded out. Hahn slapped a sassy liner to Tinker—and there were two out. Jones played his string clear out and worked Brown for a pass then went to second when a little passed ball hit the umpire’s foot. A single or a bad slip would tie up the game, and the chanting victors paused in their way homeward. Isbell was all that stood between Brown and victory, between Altrock and defeat, and gamely the veteran of unknown years responded. Waiting until he got one he liked he hit like a shot straight back at Brown. What Mondecal thought, if he had time to think, never will be known, but with reckless courage he stuck out his hands and blocked that hit, which knocked him off his feet so great was its force. The ball dropped at his side, Brown sprang to his feet like a cat, picked it up and threw to Chance, ending the game. A less nervy, game pitcher never would have taken chances with that drive, and an instant’s hesitation or wavering might have cost the game, for the ball never would have stopped short of center field and would have tied the score—with Hero Rohe coming next to bat.

Small Chance for Sox
Only once before that ninth did Brown allow a Sox pass first base. Then it was not his fault. Rohe opened the Sox fifth with a hit to Steinfeldt, who threw high to Chance and the runner was safe. A sacrifice by Donohue put Rohe on second, and John of Troy alone prevented a run. Dougherty caught a low ball on its nose and pulled it fast between first and second. It looked out of all reach but Evers, running low, extended himself to the limit. He blocked the ball but fumbled, then recovered in a flash and threw to first ahead of Dougherty, who was under full steam—and Pat can go some when he tries. Rohe was stopped at third and left there when Davis struck out.

Hofman and Hahn Shine
Hofman and Hahn carried off the title of Champions in the outfield with a star catch apiece. Artie’s great capture was made off a seemingly sure triple by Hahn at the beginning of the Sox half of the fourth. Hahn’s brilliant feat came in the second. Steinfeldt was on third with two men out, when Jonesordered Altrock to pass Kling. Nick reluctantly started to obey orders, but fired one high ball a little too close to the plate, Kling reached out and gave it an awful bump, the ball sailing far out into right. Hahn had it gauged, however, and running back against the barrier which restrained the crowd, reached up and pued the hit down just as it was going out of bounds.

Notes and Comments on the Game
If it comes to a tie, the location of the deciding game probably will be decided by the spin of a coin. There is no chance of any other city getting the game.

According to officials of the national commission, the demand for redhots was lighter than in the previous games.

No blue noses and only one silk hat.

A copyist, after reading of the fun occasioned by the Kuhn chicken on the west side, brought a rooster whose spurs were incased in white sox.

Some protoplasm of dishonesty, who in the regions below probably will annex Nick’s trident for a souvenir, kept the ball that fell in the box in which he was sitting back of the catcher. Big Overall went over from the Spuds’ bench, but the ball was quickly hidden.

All square again and two to get.

Altrock’s kibosh was broken at last and accounts between Mordecai and Nick are even.

George Davis left the hospital squad to fill Tannehill’s shoes and let Lee rest that stiff knee. George’s lame back apparently gave him some trouble, but he played near old form. He was given a warm welcome when he first came to bat.

For some time after the game started there was a line of applicants for general admission extending from the ticket office around the corner at Wentworth avenue.

Charley Kuhn, the National park groundkeeper, was assisting some policemen in regulating the crowd near the center field bleachers and was saluted with, “Get iut of there; you belong on the west side.” Long years of experience have taught Mr. Kuhn that tact is better than force, and, doffing his hat, he replied to the salute with a Chesterfieldian bow.

For the first time in the series, the crowd was not under wraps, but the Sox score was a trifle blankety.

Altrock in the sixth inning pulled a line ball to the right bleachers and narrowly escaped damaging half a dozen “taken by our staff photographer” men.