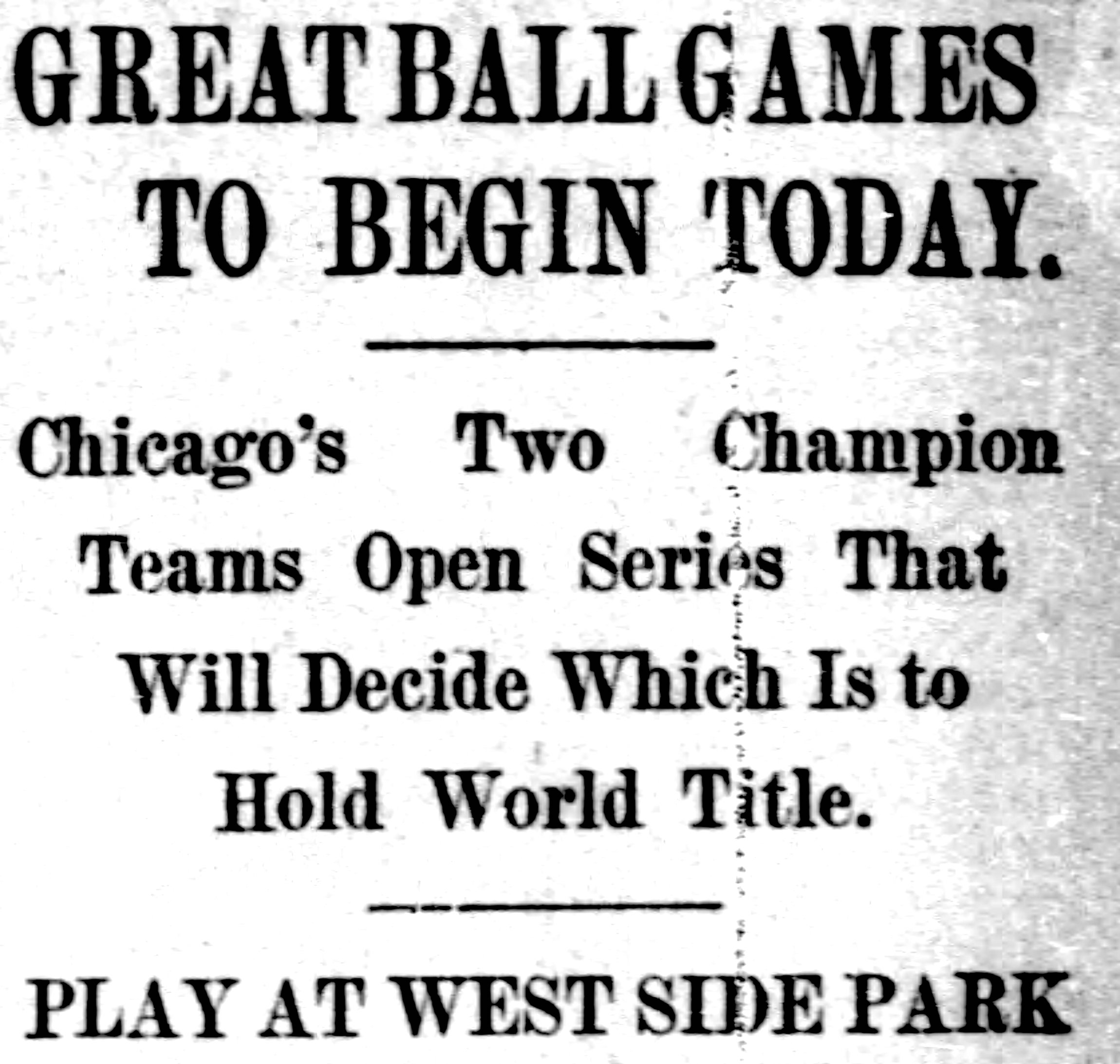 “Chicago day” will be celebrated this afternoon by the most historic event that has occurred on Oct. 9 since the year 1871. Today is the date set for the beginning of the greatest struggle in baseball’s history, the series for the world’s championship between two of the grandest ball clubs ever in knickerbockers, both belonging to Chicago.

Thirty-five years ago today the city was swept by a destructive fire, which marked an epoch in its history. Today, a fire is raging through the city that has been smoldering for weeks and will burst into its full fury at 2:30 o’clock this afternoon, when Chicago’s two teams of champions face each other on the green battlefield which is bounded by Polk, Wood, and Lincoln streets on the west side.

Then there will be an outlet for the pent up enthusiasm which has been raging in the breasts of the many thousands of fanatics ever since it began to be possible for Chicago to win both major league pennants and bottle up all the baseball honors of the year within its own outlines. But it will be a harmless fire of loyalty to one team or the other, inspiring in its grandeur but not terrorizing or disastrous in its results. It will rage for from four to seven days, possibly longer if the weather interferes, then will die out of itself when the procession of the highest reward a baseball club can win have been determined. The rooter will return to his work joyously or sadly, as the case may be, and the world’s series of 1906 will be a receding milestone in the history of America’s national pastime. 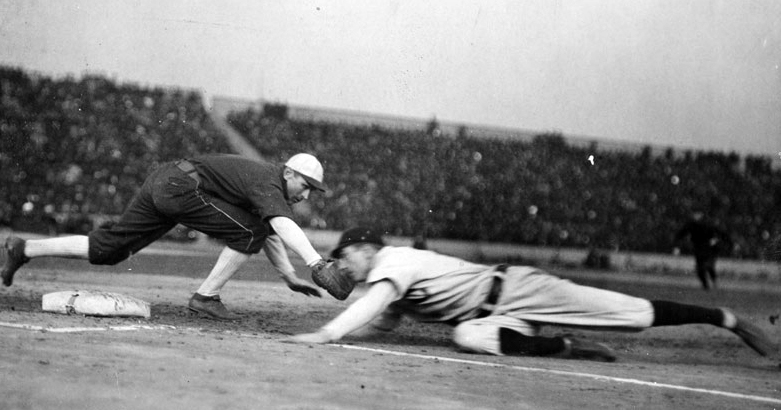 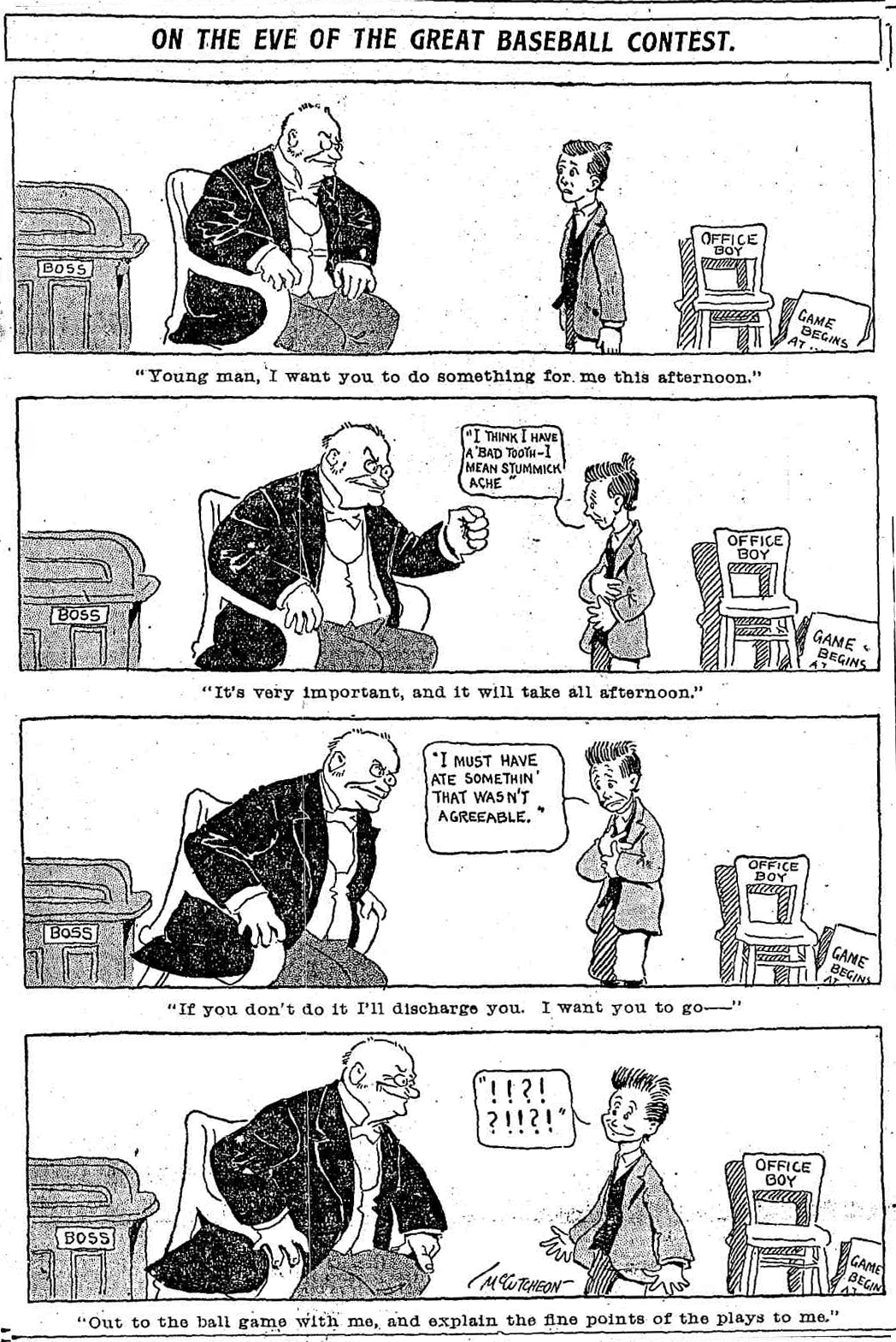 The 1906 World Series was the first modern “Subway Series”, in a broad sense of the term (although Chicago did not have a Subway system at the time), although on the first day of the World Series, the City received a go ahead to proceed with building one.

The 1906 World Series is the last World Series, as of 2014, to feature two franchises that had never before appeared in the Series. Also, barring further expansion, the only theoretical matchup that can break this streak would be the Seattle Mariners (representing the American League) versus the Washington Nationals (for the National League).

The 1906 World Series was the first World Series appearance for the Cubs’ famous infield trio of Joe Tinker (shortstop), Johnny Evers (second base), and Frank Chance (first base). The trio hit a combined 9 for 59 in the series.

Two future Hall of Fame pitchers appeared: Mordecai Brown for the Cubs and Ed Walsh for the White Sox. However, this pair did not pitch against each other in any game of the Series. Nor did either of them pitch the most dominant game of the series. Instead, that honor went to the Cubs’ 23-year-old Ed Reulbach, who pitched the first one-hitter in World Series history in Game 2.

The first five games of the Series were won by the road team. This unusual occurrence was duplicated exactly 90 years later in the 1996 World Series.

Doc White recorded the first ever World Series save in Game 5. Saves were not officially recognized as a statistic until 1969, but the stat has been retrofitted by historians.

The 1906 World Series was the first Series with a surprise star, an obscure player who for a brief time became a star. Third baseman George Rohe batted .348 and drove in nine runs in the six games of the Series. He had a rather nondescript career prior to and following the 1906 World Series, and was out of the game by 1908.

Games 1 and 2 were played amid snow flurries in Chicago. This would not happen again in a World Series until 1997.

Bill O’Neill of the White Sox became the first pinch runner in series history during the sixth inning of Game 3 when he came in to run for Eddie Hahn.

White Sox outfielder Patsy Dougherty became the first player to both play in and win two World Series. He had previously played for the Boston Americans in the 1903 World Series. 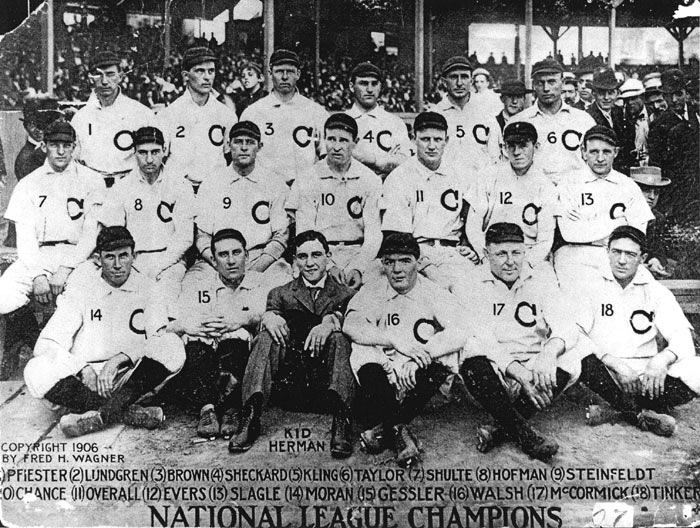 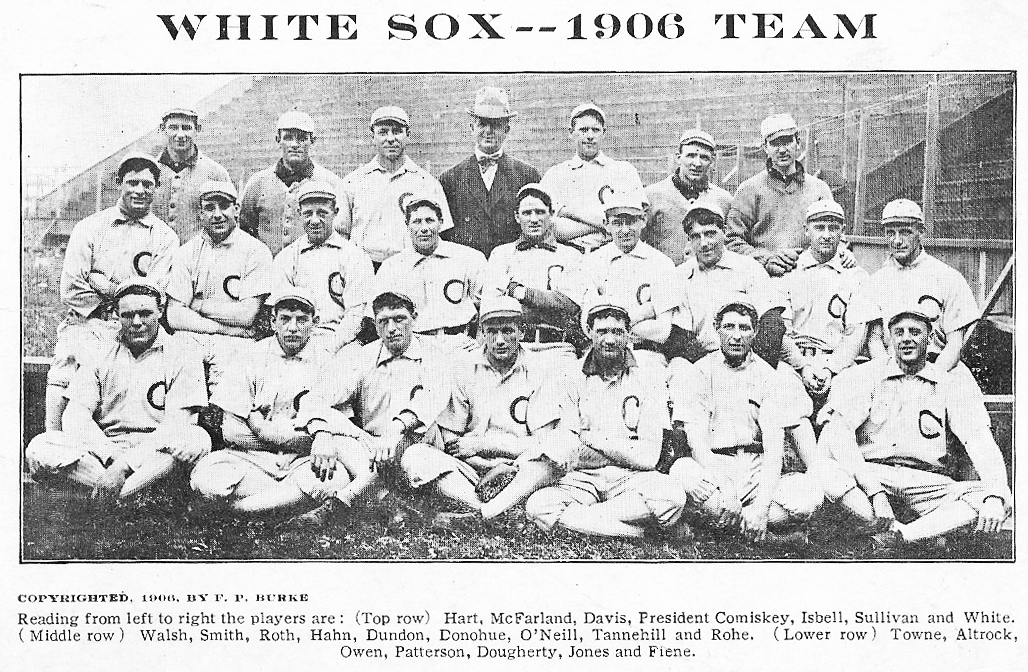 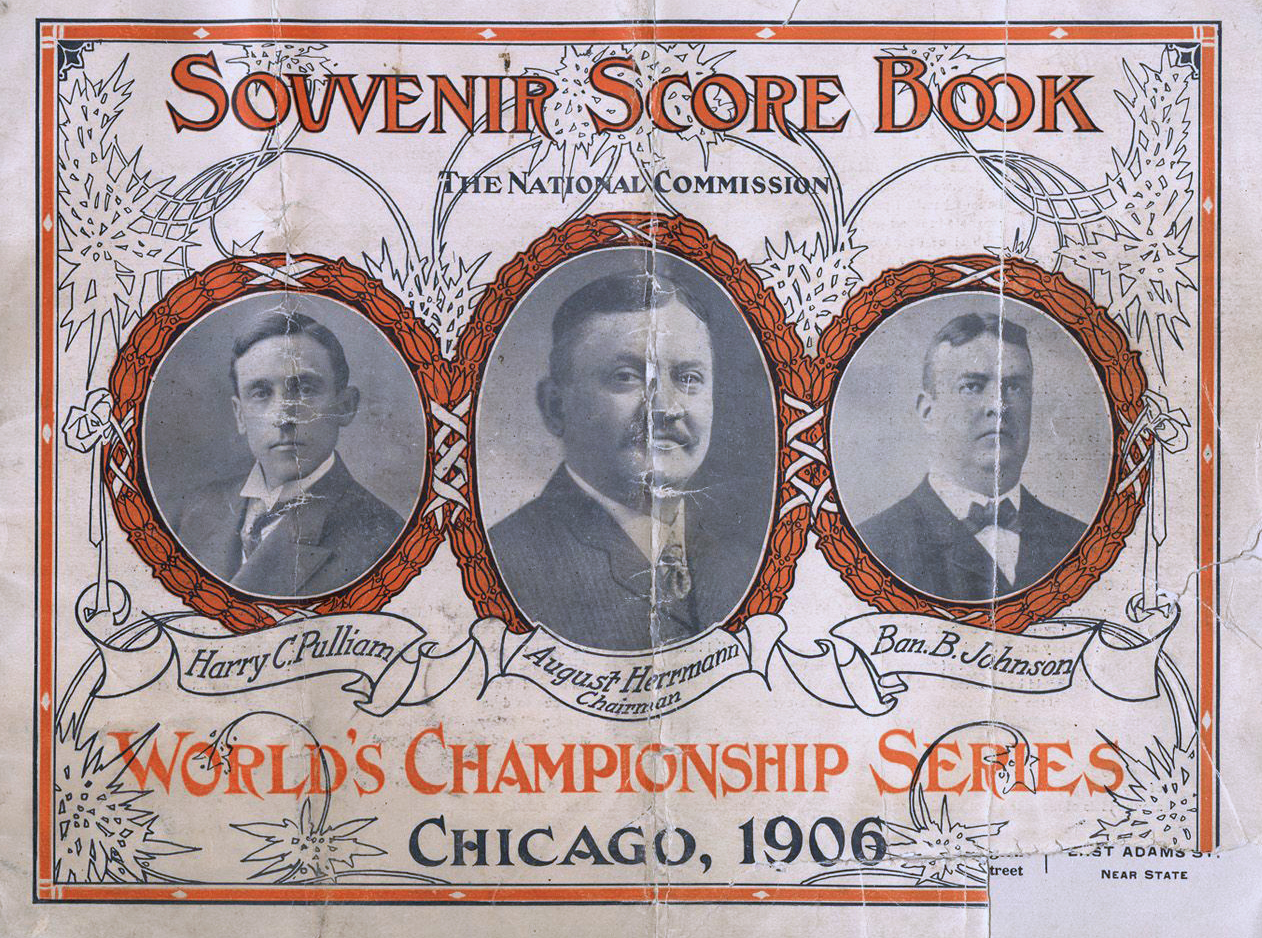 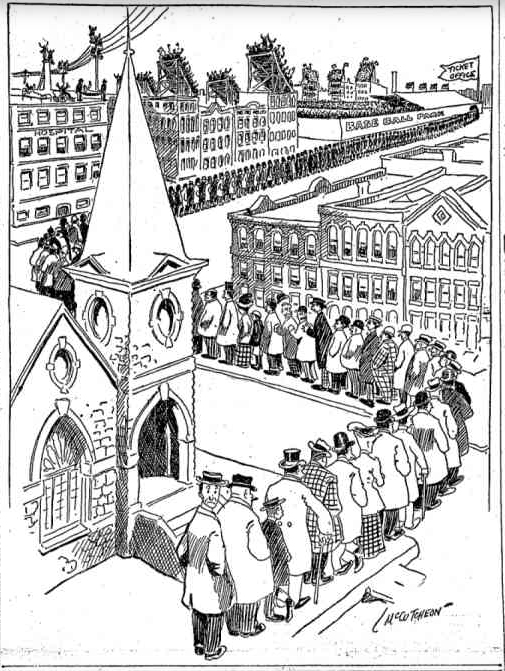 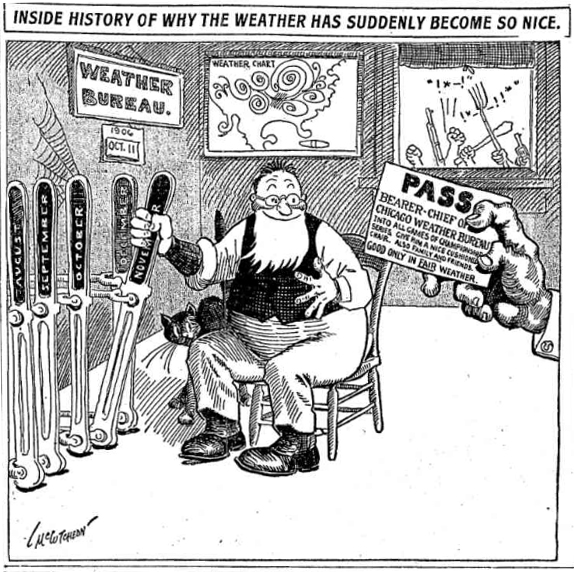 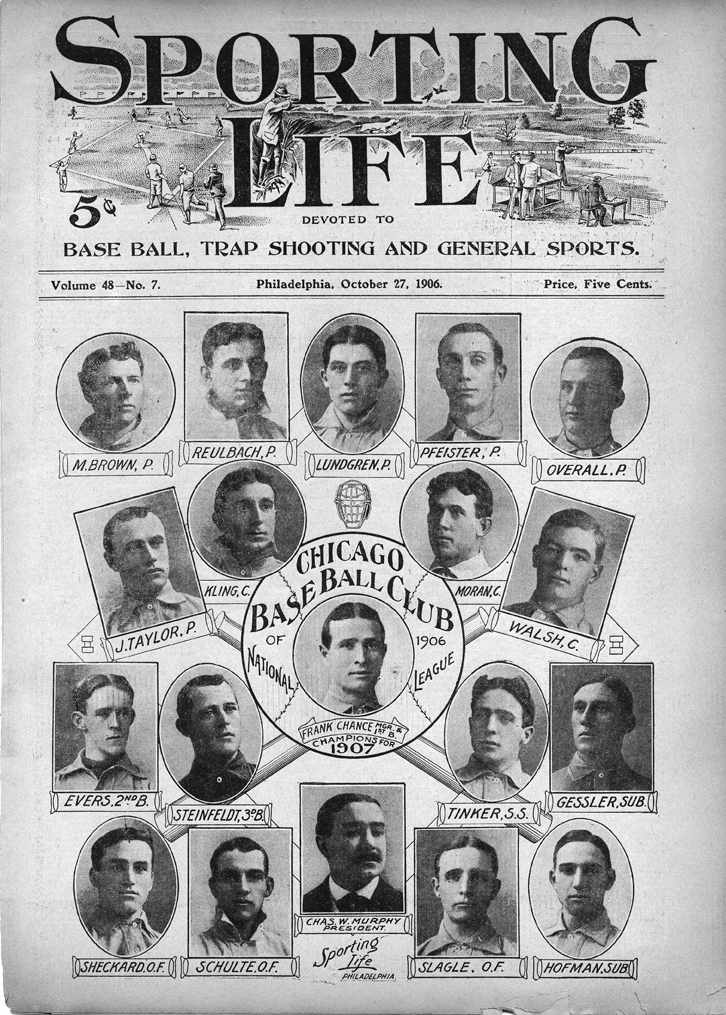