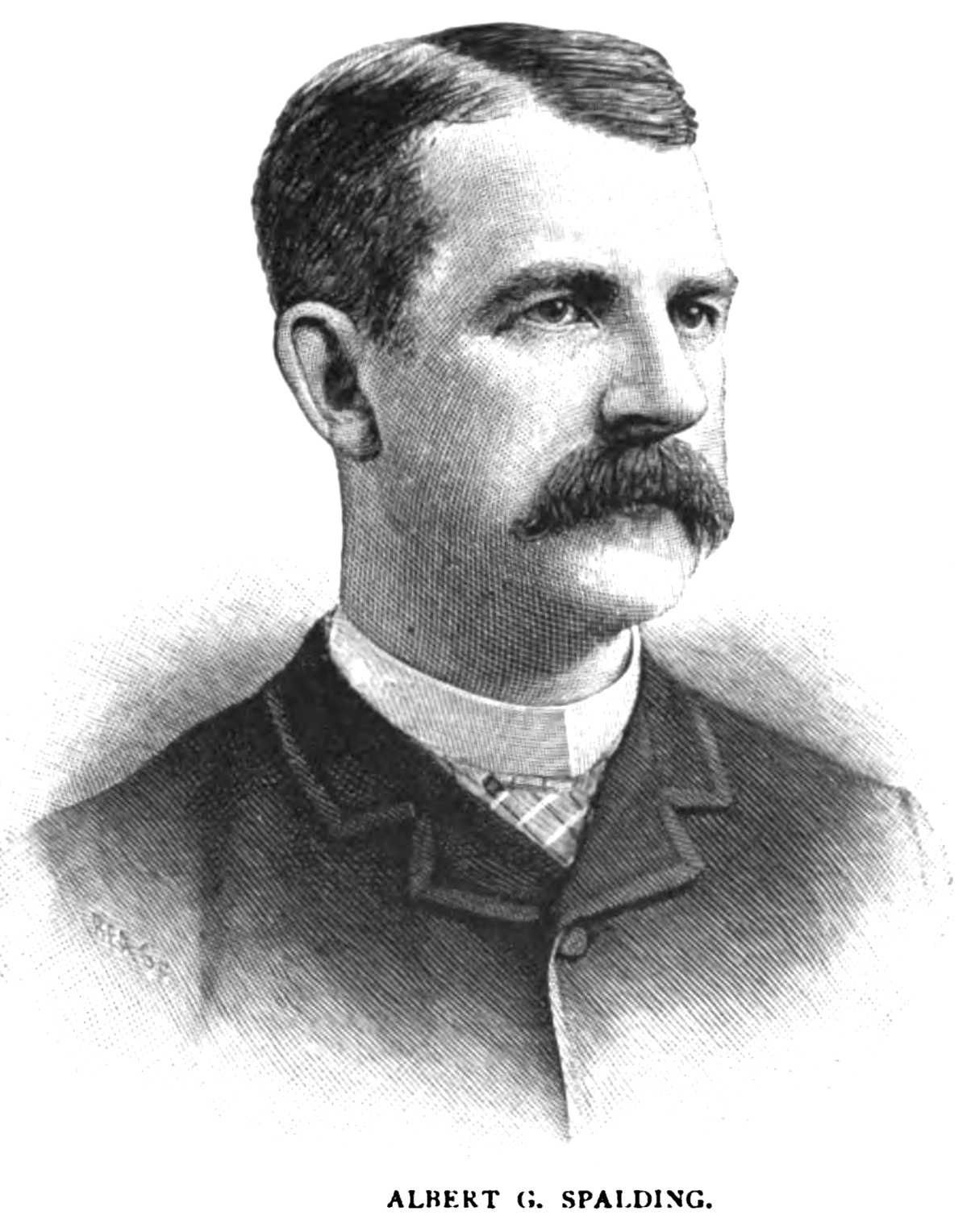 The greatest historical event recorded in the annals of the national game was undoubtedly the journey to Australia, which began in November, 1888, and ended in March, 1889, on a trip around the world. While in 1874 Mr. A. G. Spalding (right) was the avant cornier of the visiting party of base ball players to England, and also one of the most prominent of the victorious team players; in 1888 Mr. Spalding was the originator of the trip, the master spirit of the remarkable enterprise, and the leader of the band of base ball missionaries to the antipodes. Of course, in recording the Australian trip in the GUIDE for 1889, only a cursory glance can be taken of the trip, as it would require a volume of itself to do the tour justice. Suffice it to say that the pluck, energy and business enterprise which characterized the unequaled event reflected the highest credit not only on Mr. Albert G. Spalding, as the representative spirit of Western business men, but also on the American name in “every respect, and it did for the extension of the popularity of our national game in six short months what as many years of effort under ordinary circumstances would have failed to do.

In order to further promote the interests of Base Ball, a few gentlemen from Chicago, undertook to establish the National Game of America upon foreign soil. Accordingly on the 20th of October 1888, they, in company with a number of ball players, reporters and tourists, left Union Depot on an expedition, known as the Spalding Australian Base Ball Tour. A crowd of people collected to see our departure and also to view the newly decorated and handsome sleeping car Galesburg and dining car, Cosmopolitan, which were consigned to the party until our arrival in Denver, Colorado. The signal for starting was now heard, and with many farewells and good wishes, the train drew out of the Union station, amid the prolonged cheers of the multitude. The myriads of lights were fast receding in the distance but on we plunged into the dark hours of the night, taking our first step toward that far away goal. Everybody is in the best of health and spirits and sounds of revelry were heard, into the “wee” small hours of the morning. 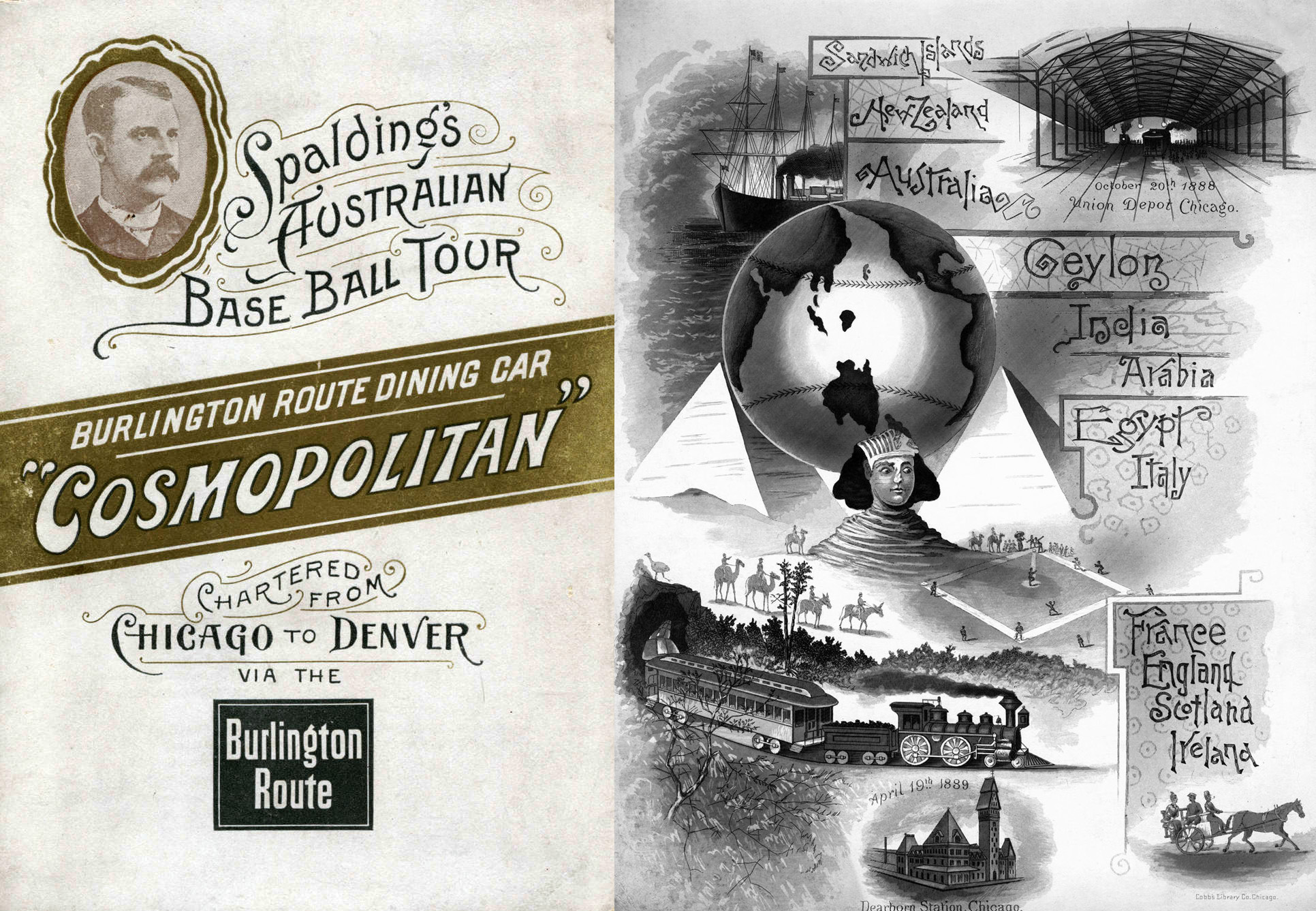 The party of tourists which started on their journey to Australia on October 20, 1888 (from Chicago via the Burlington Railroad), met with an enthusiastic welcome on their route to San Francisco, and in that city they were given a reception on their arrival and a send-off on their departure for Australia, unequaled in the history of the game on the Pacific coast. The record of the series of games played by the two teams—Chicago and All America—en route to San Francisco and while in that city, is appended.

During the tour, the Chicago and All-America teams played fifty-three games of four innings and upwards. Three of these were tie games, and of the remaining fifty, All America won 28 and Chicago 22 games. In addition to these, the Chicago’s played two games against the St. Paul team at Minneapolis and St. Paul, and both Chicago and All America played exhibition games with the teams of the California League, at Stockton, Los Angeles, and San Francisco.

The teams, when they left San Francisco on November 18, 1888, included the following players: 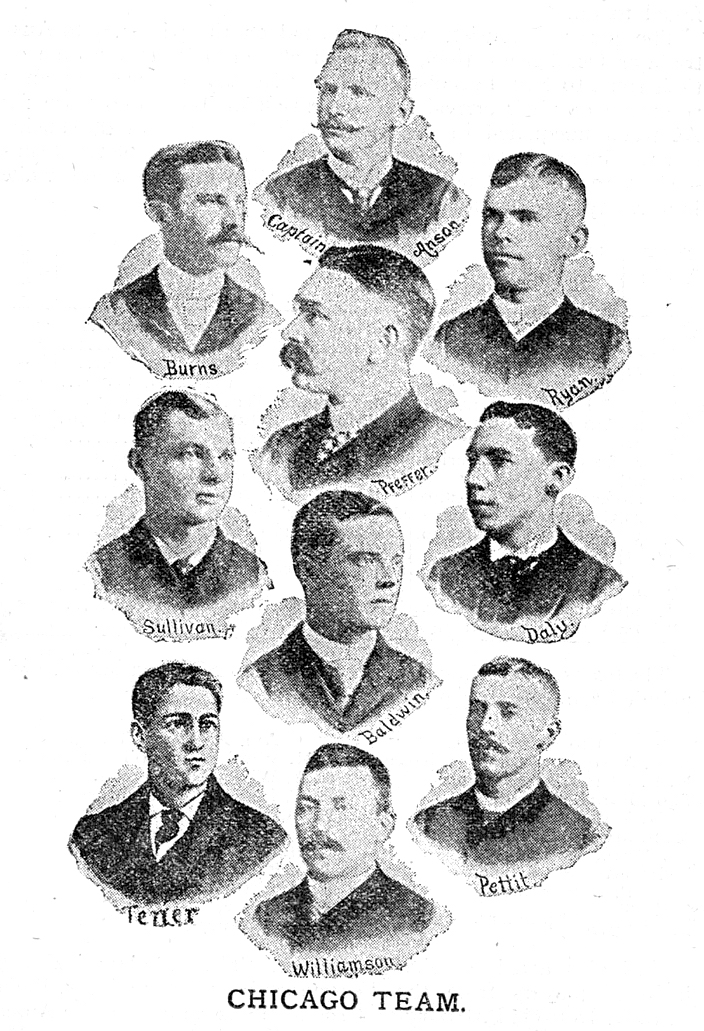 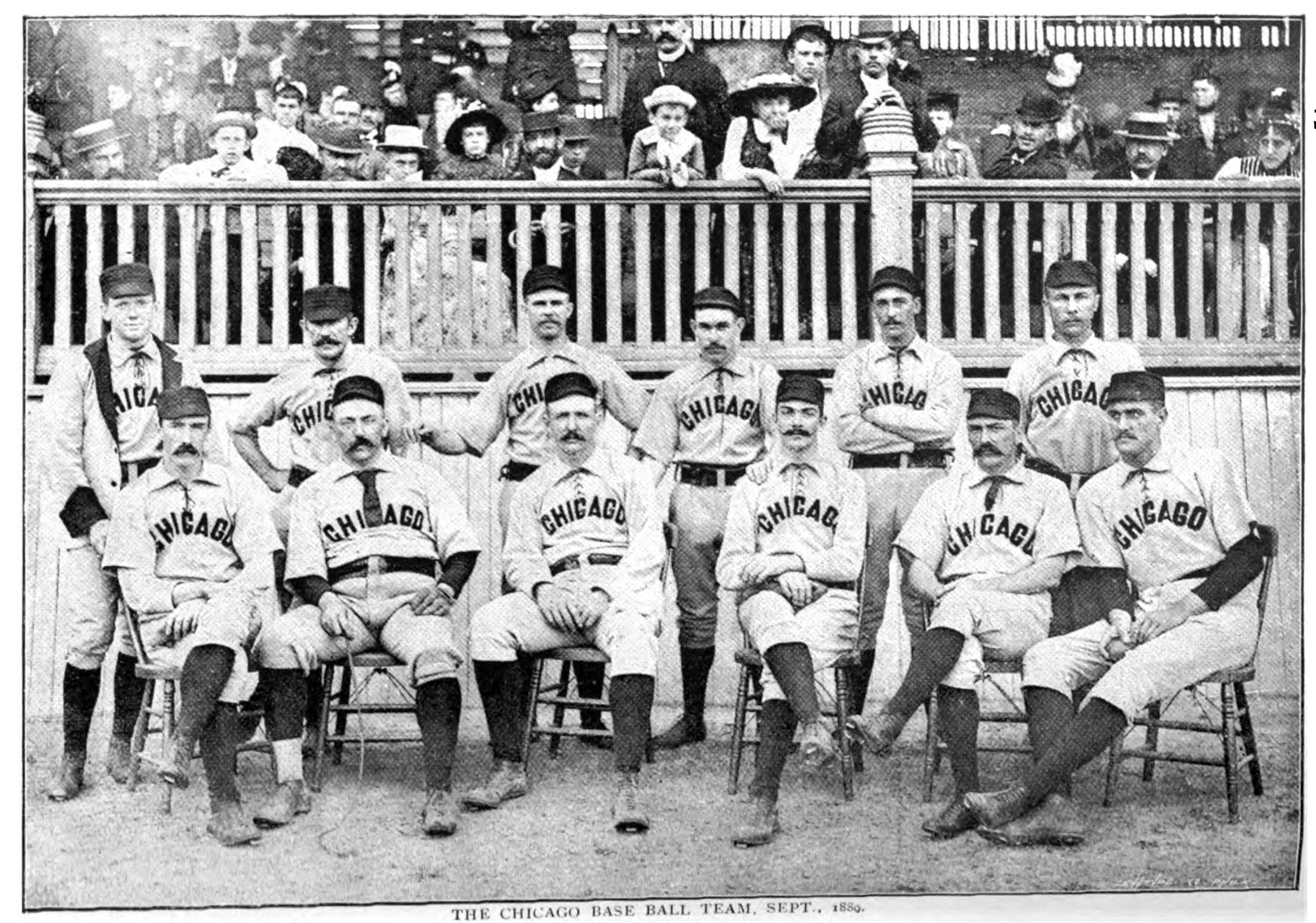 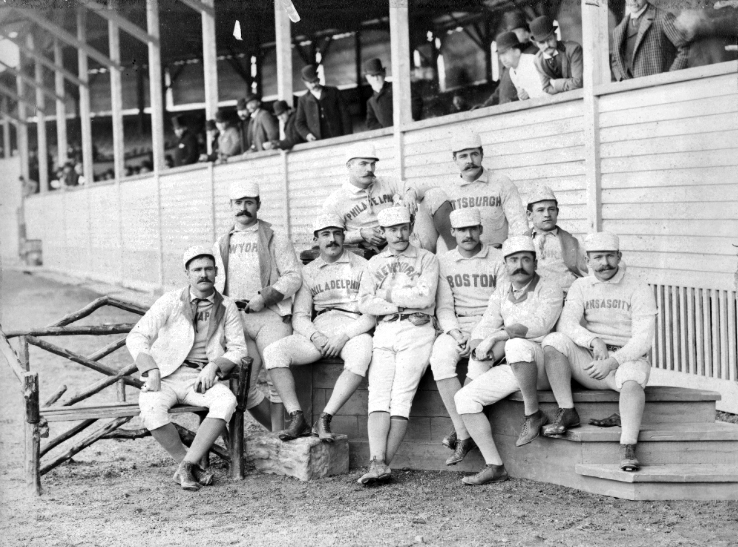 All America Team
Left to right, John Healy of the Indianapolis Hoosiers, Ed Crane of the New York Giants, Jim Fogarty of the Philadelphia Quakers, George Wood, also of Philadelphia, John Montgomery Ward of the New York Giants, Tom Brown of the Boston Beaneaters, Fred Carroll of the Pittsburgh Alleghenys, Ned Hanlon of the Detroit Wolverines, Billy Earle of the Cincinnati Red Stockings, and Jim Manning of the Kansas City Cowboys at Washington Park on April 8, 1889.

Earl also acted as change catcher. The All America team included players from the League clubs of New York, Philadelphia, Detroit, Pittsburg and Indianapolis, and from the American Association clubs of Cincinnati and Kansas City. Mr. Spalding stood at the head of the tourist party, with Mr. Leigh S. Lynch as his business manager, and H. H. Simpson as assistant, Mr. J. K. Tener being the treasurer and cashier. 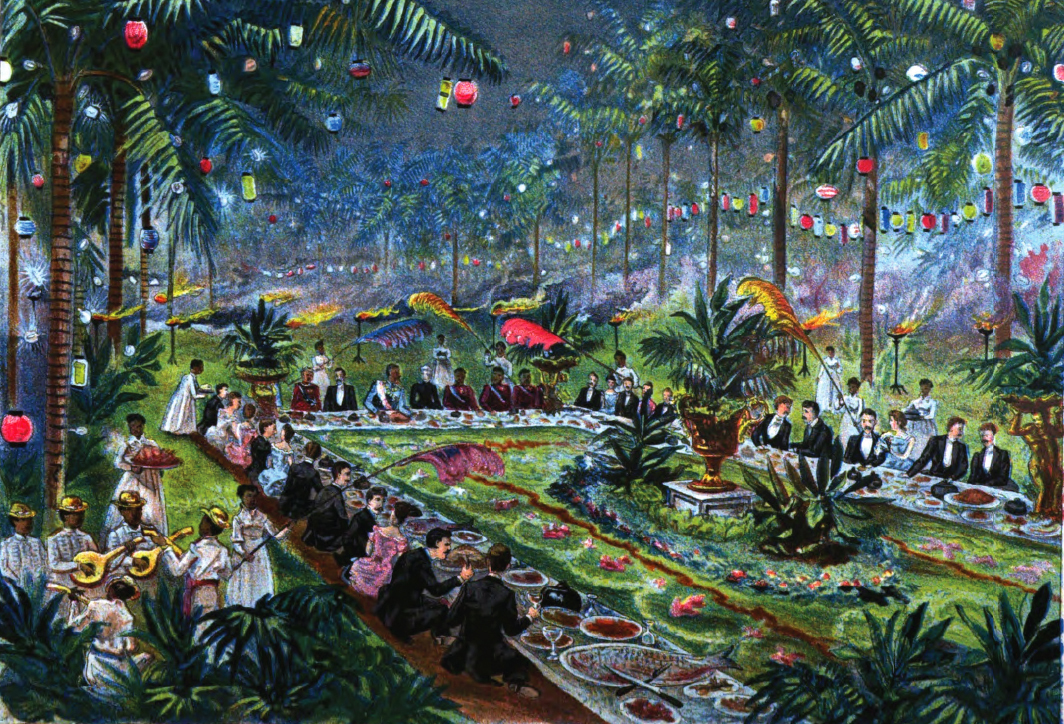 While en route to Australia the tourists stopped at Honolulu2, where they were given a public reception, by King Kalakaua, but their first game played after they had left California was at Auckland, where they first realized what a cordial reception the Australians had prepared for them. On their arrival at Sydney, and afterward at Melbourne, the hearty welcome accorded them, not only as ball players but as representatives of the great Western Republic, was such as to surpass all their anticipations, the heartiness of the greeting, the boundless hospitality and the crowded attendance at their games imparting to their visit a brilliancy of success which fully remunerated Mr. Spalding for all the pecuniary risks he had incurred by the trip. It was originally intended to have made the tour of the colonies a more extended one than was afterward found possible, and so the sojourn of the players on the Australian continent ended sooner than anticipated, only four cities being visited, instead of eight or ten, as laid out. The record of the games played in Australia is as follows: 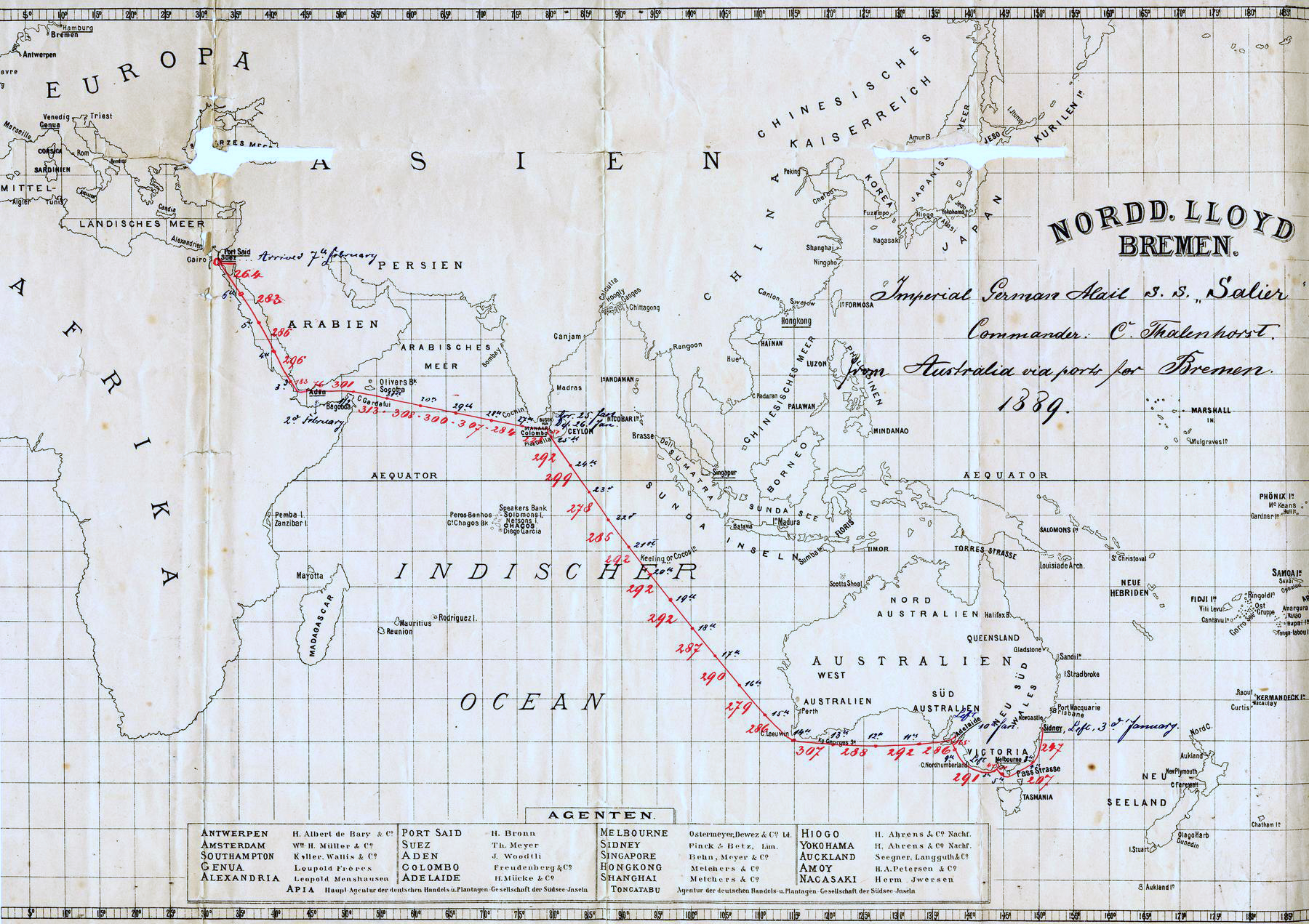 The route taken by the Spalding baseball tourists.

In commenting on the physique of the American ball players, the editor of the Melbourne Argus says:

Right worthy of welcome did those visitors appear-stalwarts every man, lumps of muscle showing beneath their tight fitting jersey garments, and a springiness in every movement which denoted grand animal vigor and the perfection of condition. We could not pick eighteen such men from the ranks of all our cricketers, and it is doubtful if we could beat them by a draft from the foot ballers. If base ball has any “anything to do with building up such physique we ought to encourage it, for it must evidently be above and beyond all other exercises in one at least of the essentials of true athletics.

The Melbourne Sporteman in its report of the inaugural game in that city, said:

The best evidence offered that Melbournites were pleased and interested in the exhibition lies in the fact that the crowd of nearly ten thousand people remained through not only nine but twelve innings of play, and then many of them stayed to see a four inning game between the Chicago team and a nine composed mainly of our local cricket players, who made a very creditable show, considering the strength of the team they were playing against, and the fact that they were almost utter strangers to base ball. Not only did the spectators remain upon the ground but they heartily applauded the heavy batting, the base running and base sliding and the brilliant fielding executed by our Yankee visitors. Perhaps the truest realization of just how difficult it is to play a finished game of base ball was obtained by the cricketers who went in against the Chicagos. A man may be able to guard a wicket with a degree of skill that would win him wide fame in cricket circles, but when it comes to standing beside the home plate of a base ball diamond, and mastering the terrific delivery of an American professional pitcher, the average cricketer is compelled to acknowledge the wide difference existing between the two positions. Then again, the quick handling of a batted or thrown ball, that it may be returned with all accuracy and lightning like rapidity to the waiting basemen are points which our cricketers are deficient in, when compared with the American professional ball player. It can be seen at a glance that the game is prolific of opportunities for quick and brilliant fielding. 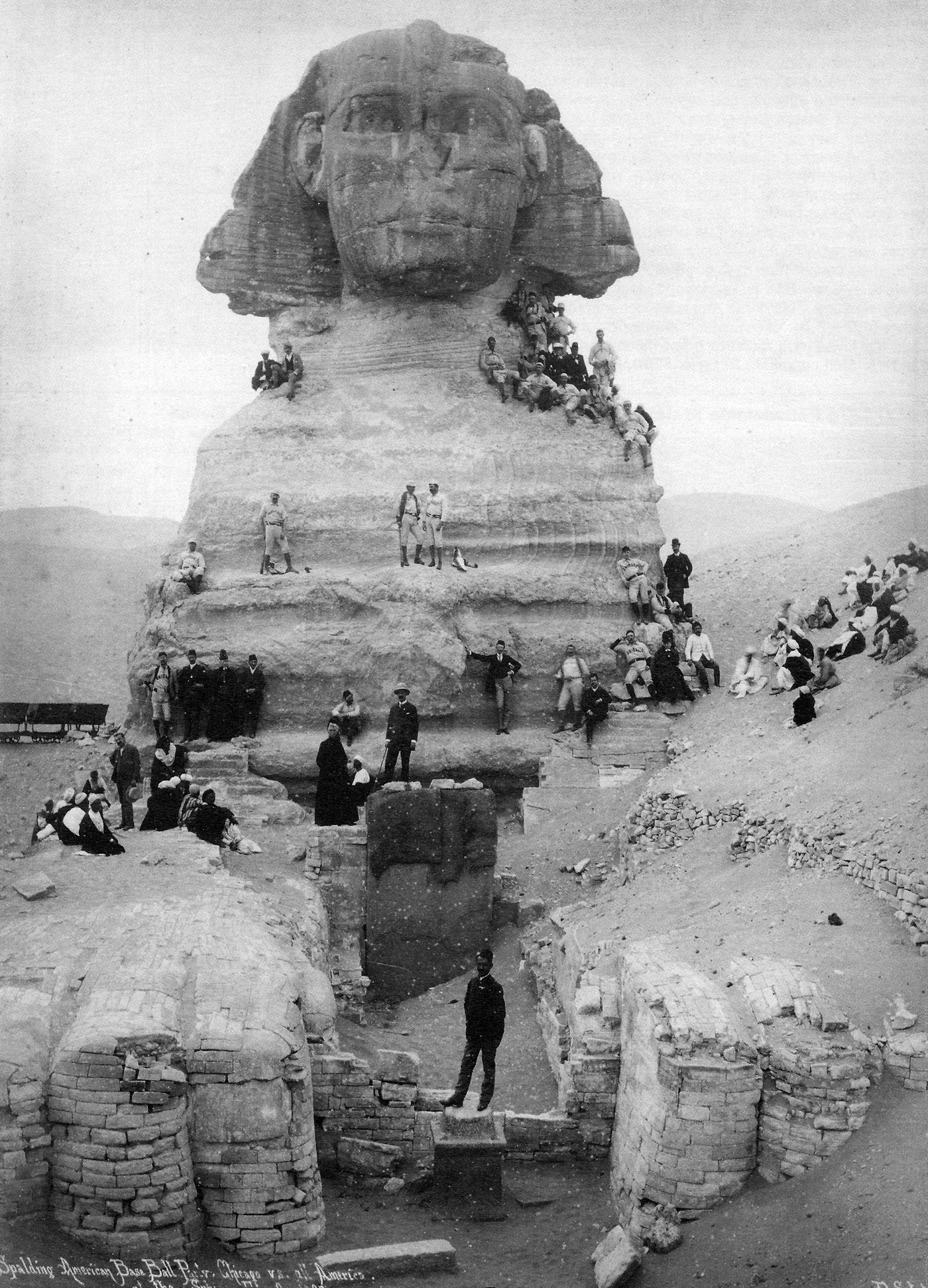 Spalding and the players climbed onto the Sphinx for photographs, much “to the horror of the native worshippers of Cheops and the dead Pharoahs.” No less disconcerting must have been unsuccessful efforts of several ballplayers to throw baseballs over the sacred Egyptian tombs. Observers reported that they amused themselves by throwing baseball’s at the Sphinx’s right eye, and that Fogarty, the Philadelphia outfielder, actually hit it.

After leaving Australia the tourists called at Colombo, Ceylon, and from thence went to Cairo, and while in that city visited the Pyramids, and they managed to get off a game on the sands in front of the Pyramid Cheops on Feb. 9. Their first game in Europe was played at Naples on Feb. 19, and from there they went to Rome, Florence and Nice, the teams reaching Paris on March 3. The record of their games in Europe is as follows: 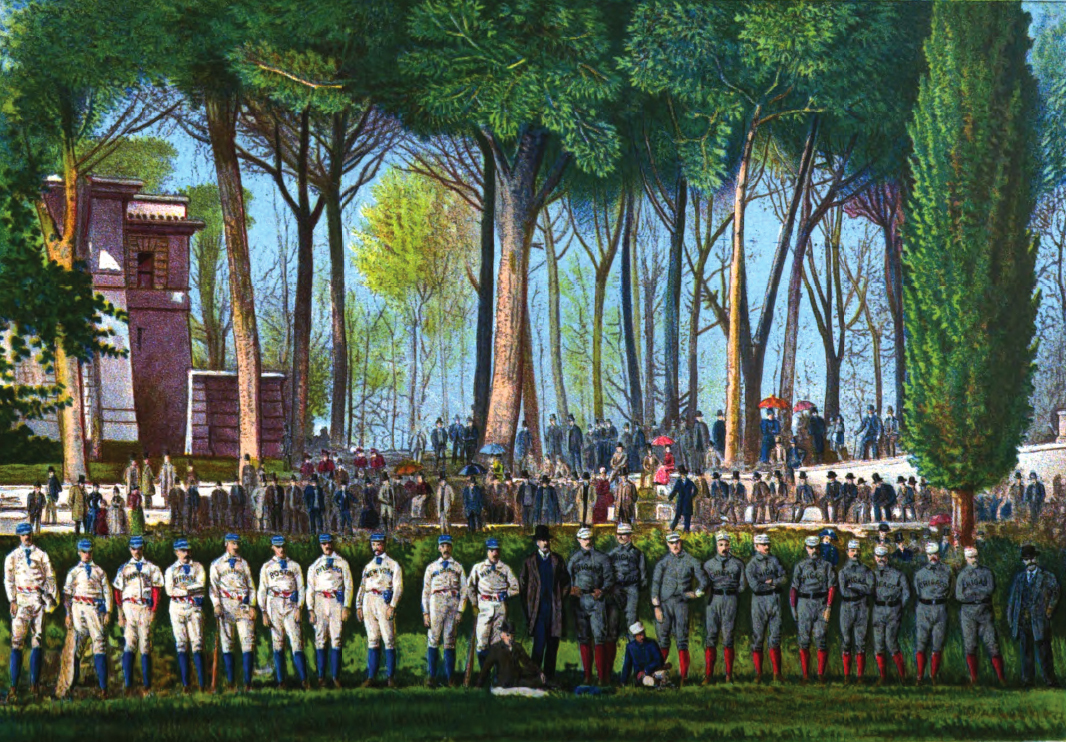 Chicago and All America Teams Ready For Play at Villa Borghese, Rome 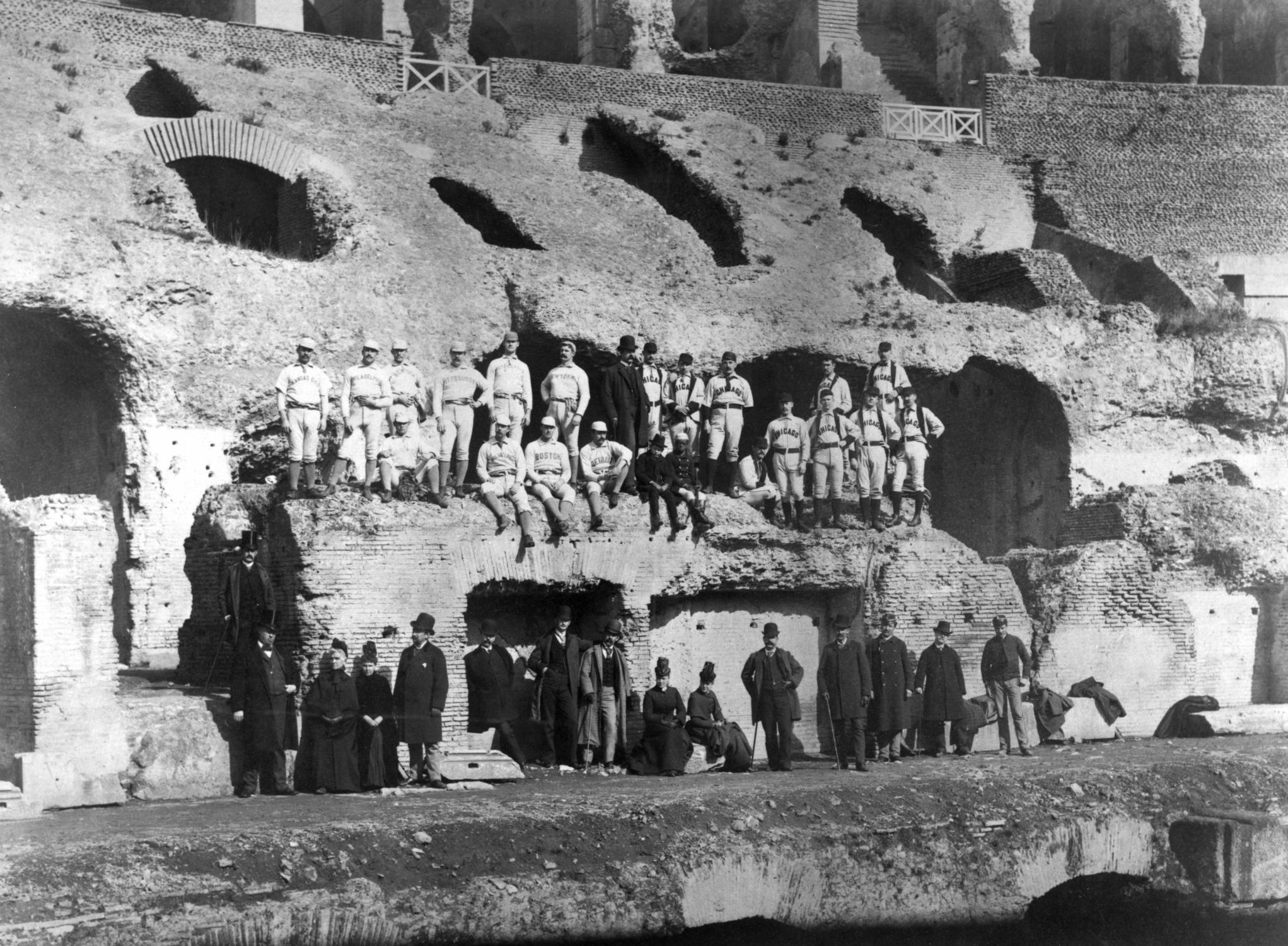 Spalding Tour at the Coliseum. 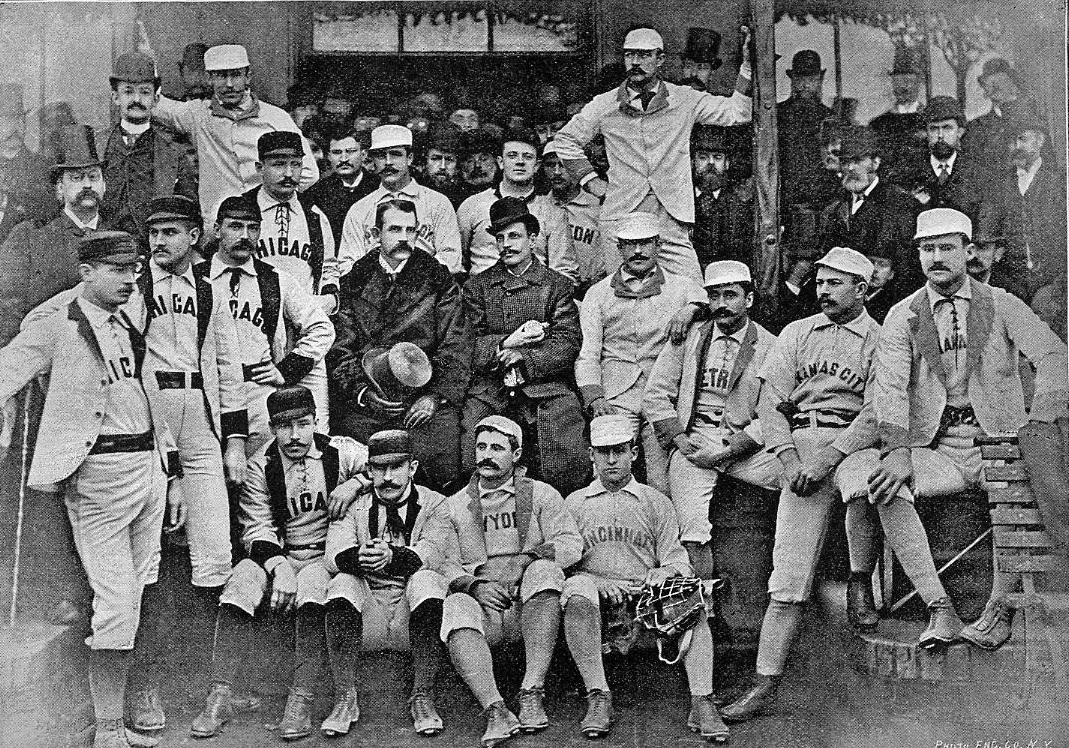 The Base Ball Tourists in the Club House, Kensington Oval, London 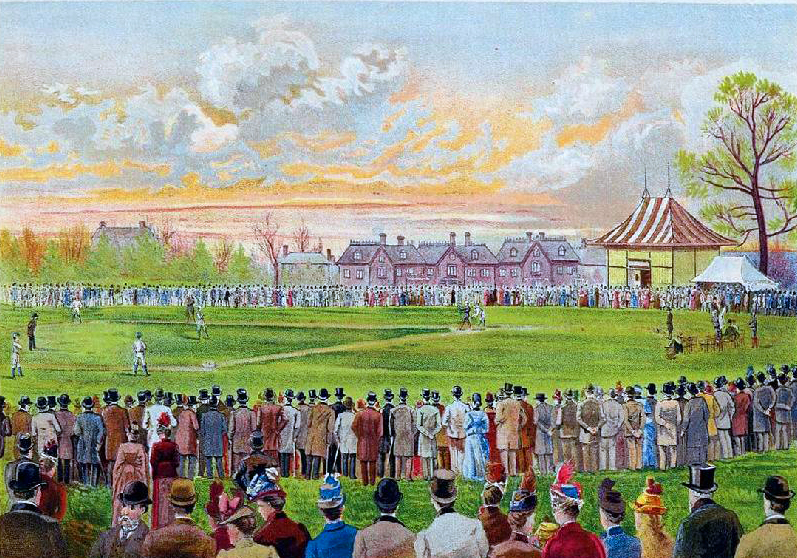 Game of Chicago and All America Teams at Crystal Palace Grounds, London

On March 28, the Spalding entourage boarded the steamship Adriatic of the White Star Line for their final ocean voyage back to the States. After nine days, the ship reached New York harbor amid a hero’s welcome. The clubs spent the final two weeks of the adventure attending celebratory banquets, being honored by local dignitaries and, of course, playing ball. The globetrotting ball players took to the field in Brooklyn, Baltimore, Philadelphia, Boston, Washington, Pittsburgh, Cleveland, Indianapolis, and Chicago.

The tourists’ final celebratory banquet took place at Chicago’s famed Palmer House. The Hall’s collection features one of the beautiful silk-covered menu cards that were presented to each dinner guest that evening, April 19, 1889. The following day, exactly half a year after the tour began, the ballplayers ended their adventure in appropriate fashion, with a baseball game at Chicago’s West Side Grounds. 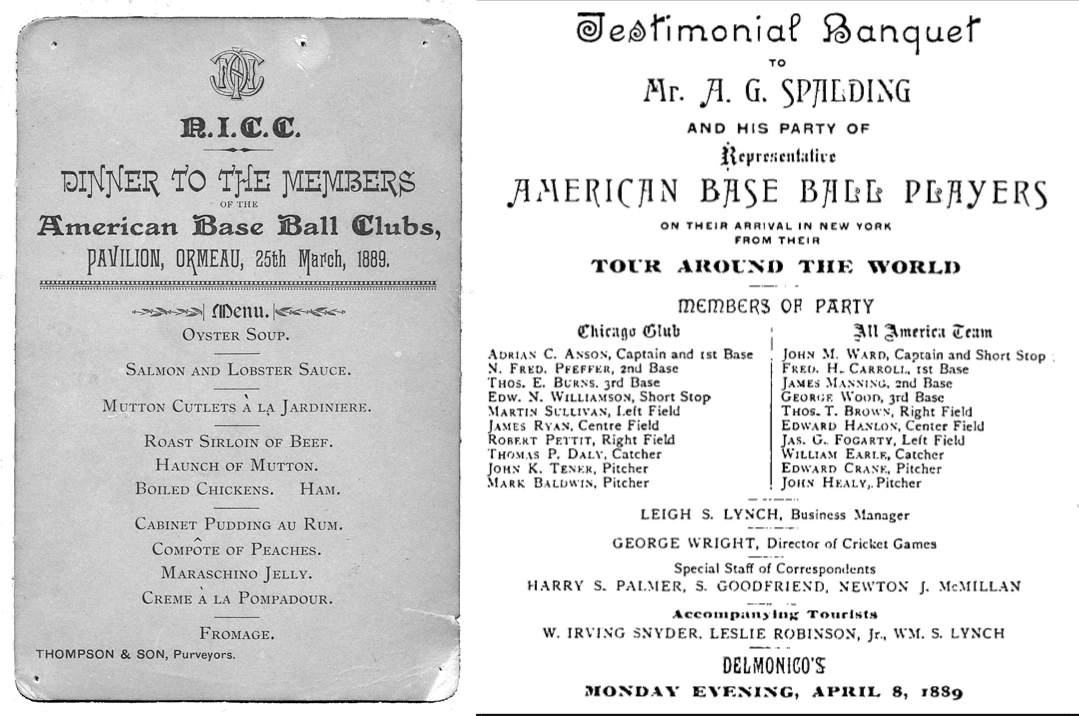 Left-Menu from the reception dinner for the Americans in Australia on March 25, 1889.
Right-April 8, 1889 banquet at Delmonico’s in New York, at which Chauncey Depew was the speaker, with Mark Twain also in attendance.

To day we have completed the circumference of the globe, for six months ago to day we bid good bye to Chicago and entered upon our tour Around the World. We have given exhibitions of our National Game in every continent on the face of the globe and also thirteen foreign countries and travelled upward of a distance of thirty thousand miles. This afternoon as tourists we played our last game and a great crowd greeted us as we appeared upon our native diamond. The game concluded and so also did the greatest trip in the annals of sport, namely a Baseball Tour “Around the World.” Finis.

NOTES:
1The games played in Los Angeles were considered Exhibition Games.
2Ironically, when the Spalding baseball tour attempted to play two games in Honolulu on Sunday, November 25, 1888, they were prevented from doing so by the blue laws, which had been created by the original missionaries and were now enforced by their descendants, who were primarily responsible for the development of baseball and the invitation to Spalding to play in Hawaii.