On July 19, 1887, Mr. Yerkes and his associates were incorporated under the name of the West Chicago Street Railroad Company, with capital stock of $10,000,000. On October 20, 1887, this company took a lease * for nine hundred and ninety-nine years of the property of the Chicago West Division Railway Company, assuming the payment of interest on the bonded debt of that company, and of an annual 35 per cent dividend on its $1,250,000 of stock. By this lease the newly incorporated company also came into possession of $730,000 of the $1,000,000 stock of the Chicago Passenger Railway Company, and on May 15, 1888, took a lease of the property of the latter company for ninety-nine years, guaranteeing 5 per cent dividends on its stock and assuming the payment of the interest on its bonds.

These transactions gave the West Chicago Street Railroad Company entire control of street railway transportation on the West Side, and ushered in the period of mechanical traction in that part of the city.

Comparative Cost of Cable and Horse Propulsion
The average cost of running a horse car a mile has been 18 cents. Cable expenses are much less than that. The average number of miles traveled by a horse each day has been fourteen miles. The average feed required by the horses has been sixteen pounds of grain and ten pounds of hay.

Description of Cable System
The West Side system is the newest and most elaborate in the city and second to none in the extent of its resources, or the perfection of its general equipment, and for this reason whatever is said in a descriptive way must naturally be confined to it. This, as well as the North Side road, it will be borne in mind, reaches the South Side or business centre by way of tunnels under the Chicago river. These tunnels were built by the city, and prior to the companies in question using them were mere holes in the ground and represented the waste of so much public money. President Yerkes, however, saw how they could be utilized to abace the bridge nuisance, and otherwise serve the people, and was quick to move in the matter of obtaining their use. In consideration of the city allowing him to use the LaSalle street tunnel he built and donated to the public two double steel steam bridges across the river, one at Wells and the other at Clark street, at a cost of over $300,000. The Washington street tunnel was in a far worse condition when taken hold of—in fact, it had been abandoned —and before it could be used had to be rebuilt at a cost of nearly $200,000. Both tunnels are now totally unlike what they were a few years ago, and the public not only recognizes the wisdom of their present use, but finds in them the abolition of the former waits at the swing bridges, which is worth additional hundreds of thousands of dollars to the cily every year.

The Madison Street Line (July 16 1890)
The West Side cable system consists of two distinct lines—the Madison street line, which runs directly west, and the Milwaukee avenue line, which runs northwest. Both lines connect with the downtown ” loop” hereafter referred to, and in smoothness of trackage and comoleteaess of equinraent are prepared to invite the most rigid investigation and comparison. The power for the operation of the system is supplied from three distinct power-houses, all of which are supplied with the best machinery and appliances thatcould be obtained. The principal power-house is located at Madison and Rockwell sts. , being 210 x 225 feet. Itcontains two 1,200 horsepower engines, and one of these is going night and day (moving the cars on Madison st.), while the other is held in reserve in case of an accident. The cable running west t© Fortieth street is driven at the rate of fourteen miles an hour, while the one running east is driven ten and a half miles an hour ; the speed of either of them, however, can be increased at will. There is in addition a Corliss engine to propel a loop rope in the power-house, by means of which the cars can be reversed at Rockwell st. whenever it is necessary. The power-house itself is a neat and attractive structure, lighted by electricity, and surmounted by a smoke-stack 175 feet high.

The Milwaukee Avenue Line (June 7 1890)
The Milwaukee avenue power-house, located at the corner of Cleaver st., in outward appearance and general equipment is very similar to the one on Madison st It is supplied with two Corliss engines of 1,200 horse-power each, which were built by Frazer & Chalmers, of Chicago. These two engines operate the entire Milwaukee ave. system, which extends from Jefferson and Washington sts. to Armitage ave. The west end rope is driven at the rate of twelve miles an hour, while the east end rope is moved at the rate of ten and one-half miles. As with the Madison St. ropes, their speed, however, can be increased or lessened at will. 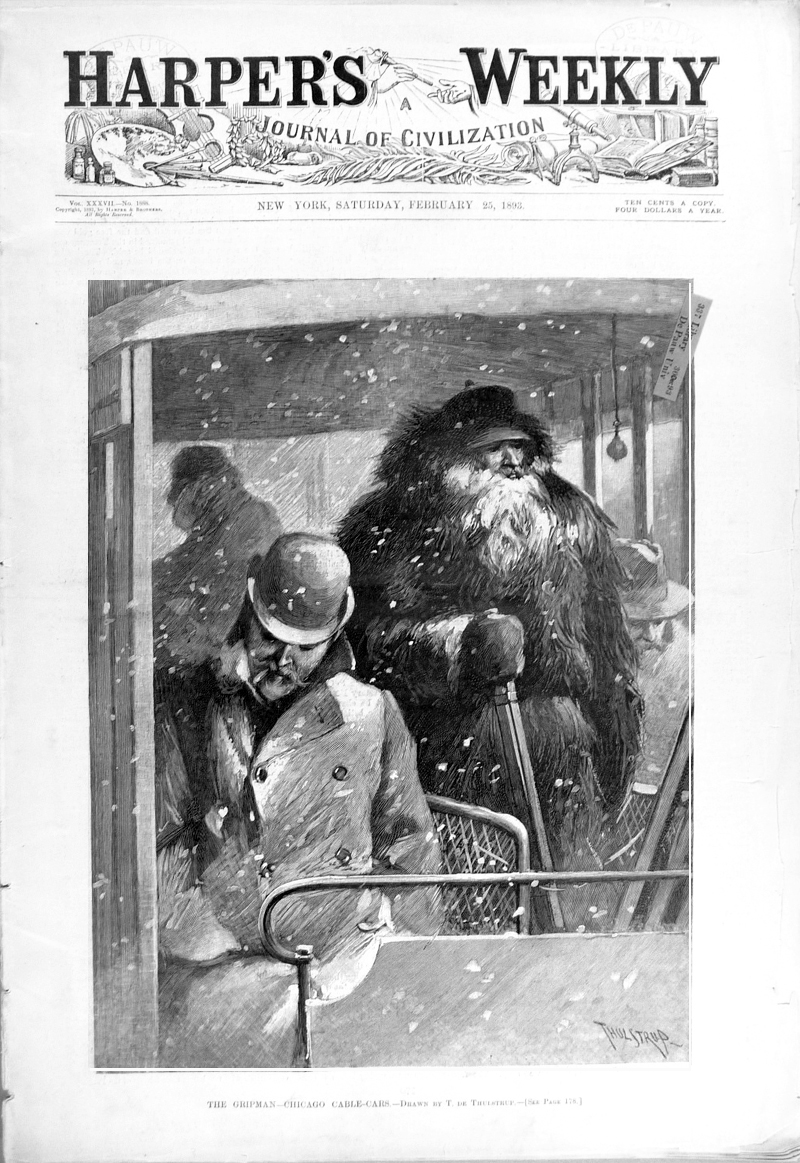 South Halsted Street Line
The third power-house is located at the corner of Jefferson and Washington sts., and is where the company’s offices are to be found. This station is furnished with two five hundred horse-power Wetherell- Corliss engines, which are used to operates the Washington street tunnel loop. The cars of both the Madison st, and Milwaukee ave. lines are delivered to the cable at this station, and by it they are drawn through the tunnel and around the loop heretofore mentioned. The service of this particular cable is very exacting. At times the heavily loaded trains are but a few seconds apart, yet there is seldom, if ever, any cause for complaint, so perfect are all the details and so elaborate the machinery and appliances. The dynamos for lighting the tunnel are also located at this point, as is also the base of an electric signal system which extends along the several cable lines. By this system the conductor or gripman can communicate with the powerhouses and offices at any time, which is an adjunct of almost incalculable advantage in keeping the tracks clear and promptly stopping the machinery in case of accidents from any cause.

Cabling Blue Island Avenue (1893)
It is expected by the company that the work of laying cable track on Blue Island ave., the great southwestern artery of the West Division, will be commenced during 1891. Powerhouses are at Jefferson and Van Buren and at Blue Island and 12th Streets. 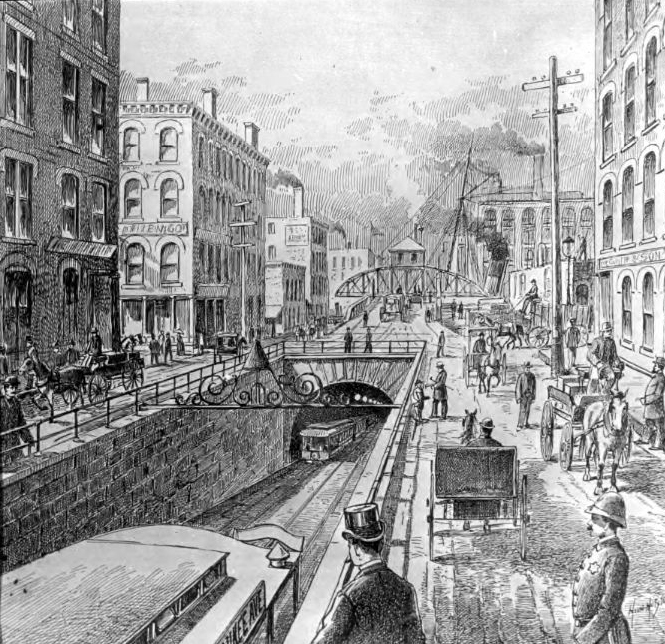 West approach to Washington Street Tunnel, between 1888 and 1906.