Washington, D.C., Sept. 2.—{Special.]—Details of plans of the postoffice department for testing the proposed Washington-New York-Chicago aerial mail service were officially disclosed today. The first mail flight to test out the Woodrow Wilson airway will Sept. 5, as recently announced in The Tribune.

Aeroplane letter mail will be carried on the trip. The flight will be made by a Curtiss and a standard plane. The machine will start from Belmont park, New York, at 6 a.m., and are scheduled to arrive at Lockhaven, Pa., at 8:30 a.m.; Cleveland at 12 noon; Bryan, O., 1:30 p.m, and Chicago at 4 p.m.

The purpose of the trip will be to chart the course for distinguishing landmarks and safe landing places. This data is desired in connection with consideration that the postmaster general is giving to the ultimate establishment of a regular nine hour aerial mail service between New York and Chicago. The landing at Chicago will be Grant park, where the war exposition is in progress.

The return trip will be made Saturday, Sept. 7. The planes will leave Chicago at 6 a.m. and, barring accident, will arrive in New York at 5 p.m. Aviator Edward V. Gardner will pilot the Curtiss and Aviator Max Miller will pilot the standard plane. Between 15,000 and 20,000 letters can be carried on the trip.

The distance is 745 miles, as follows:
New York to Cleveland, 418
Cleveland to Chicago, 322
in and out of landing fields, five miles. 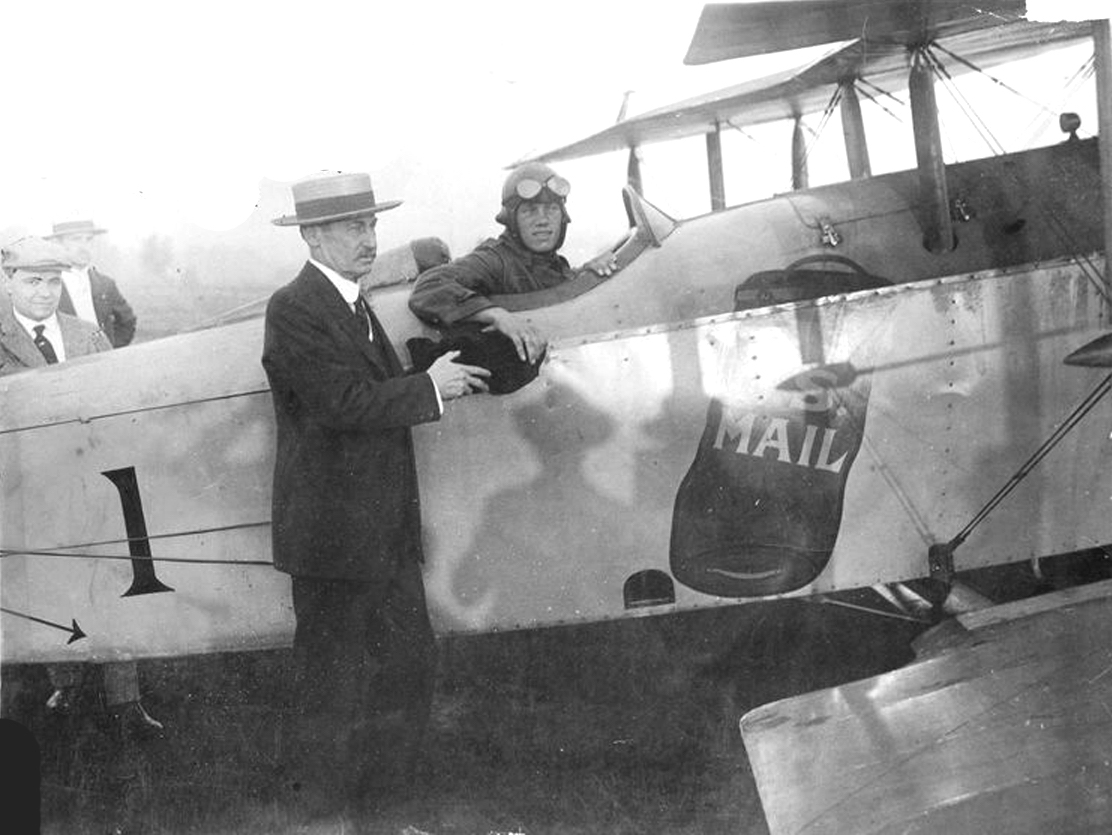 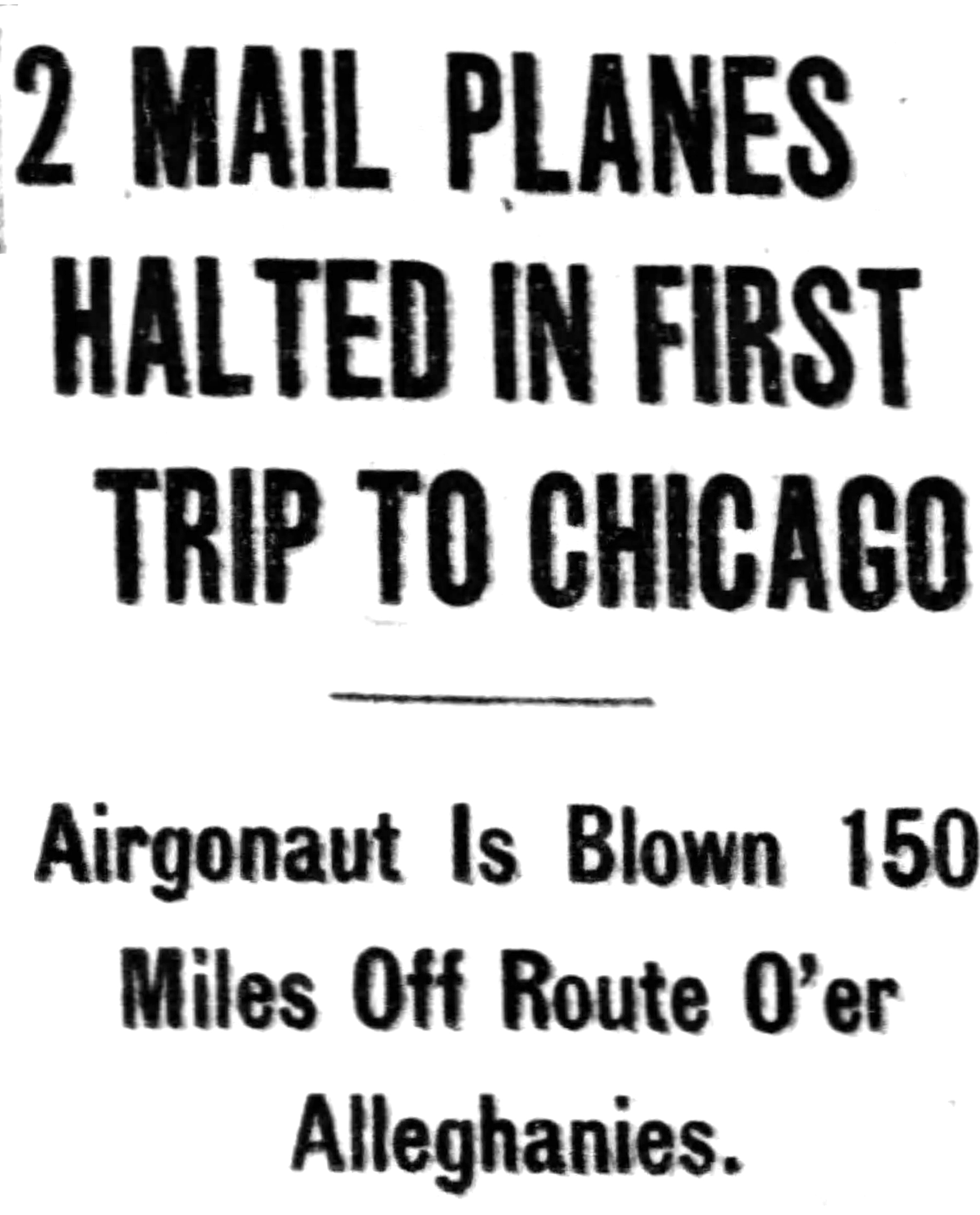 Max Miller, carrying a 400 pound sack of aerial mail from New York to Chicago in a huge, specially built airplane, last night was forced down by a storm and strong wind at Cleveland, O. Landing nose-on in the dark at 9:20 o’clock, the front of the plane plowed into the ground and was damaged. A second airplane bound to Chicago was forced to halt in Pennsylvania.

Repairs are being rushed at an Ohio airplane factory and if possible he will resume his journey this morning. The aerial mail sack with its 3,000 letters was taken in charge by the Cleveland police. The storm which caught Miller as he was soaring over the Allegheny mountains blew him 150 miles out of his way.

Mapping Out the Route.
Because of this he missed connection with his planned filling stations and had to land at Cambridge, O., for more gasoline. Capt. B.B. Lipsner, superintendent of the aerial mail service, said in Chicago that the present trip was being made to map out the route and plenty of time would be taken.

Had Miller been able to keep up with the schedule as outlined he would have reached Chicago last night. The air route followed is about 1,000 miles and a speed of 100 miles an hour was intended.

Second Plane in Trouble.
Edward V. Gardner, in a second plane equipped with a Liberty motor, was to have started with Miller. Owing to a slight accident to landing gears in starting he was delayed two hours in getting off, but before night has overtaken Miller. At Lockhaven, Pa., Gardner and his mechanic had trouble, so they stayed there over night.

Miller, with good luck, will reach Chicago sometime today. Among the reception committee will be Postmaster Carlile, Augusts Post, secretary of the Aero Club of America, and John J. O’Connor, general director of the war exposition. 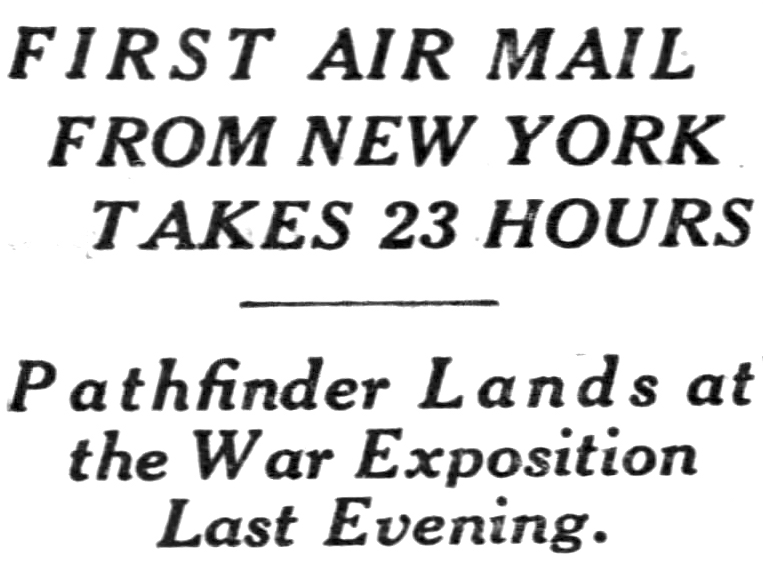 The first aerial mail between New York and Chicago was delivered at Grant park at 7:04 o’clock last night by pilot Max Miller of the United States aerial mail service. He made the trip in twenty-three hours and fifty-five minutes.

Pilot Edward V. Gardner, who was expected to arrive two hours later, was forced to make a landing in Indiana and will not reach Chicago until this morning.

The spanning of a thousand miles between the two largest cities in America with an aerial mail route was a climax to “France and Allies day” at the was exposition commemorating the birthday of Lafayette and the anniversary of the first battle of the Marne.

Crowds Cheer Arrival.
Thousands of people at the exposition cheered the arrival of Pilot Miller with the first sack of aerial mail.

The sacks of mail delivered by Pilot Miller to Capt. B.B. Lipsner, superintendent of the United States aerial mail service, were transferred in a motor truck from the airplane to the post-office. Police cleared the streets to facilitate the passage of the truck. At 8:20 o’clock a special delivery letter from Henry Woodhouse, member of the Aero Club of America, with headquarters at New York, was delivered to the editor of The Chicago Tribune.

This epoch making first trip of the New York-Cleveland-Chicago aerial mail line affords us a splendid opportunity to express our hearty appreciation of the energetic and patriotic efforts that you and The Tribune have been making on behalf of national preparedness and to develop the aerial mail service.

A few minutes later a letter was delivered to The Tribune from Frank D. O’Reilly, editor of the Lock Haven Express of Lock Haven, Pa.

This was followed by the delivery at The Tribune office of a letter from Lieut. Kenneth M. Stewart of the United States aviation service. 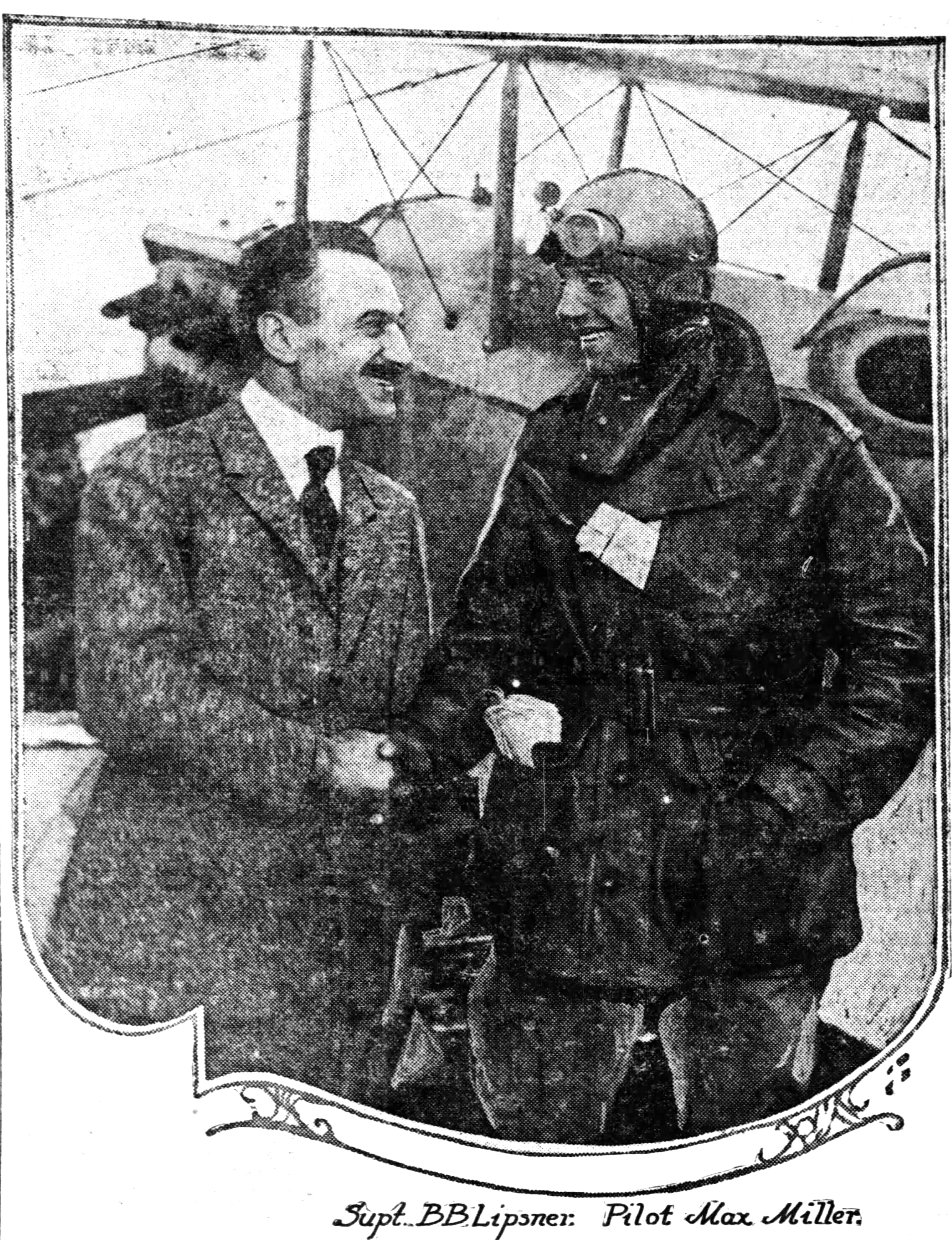 Identifies First Postal Plane.
Pilot Miller appeared in the sky to the southeast a few minutes before 7 o’clock. It was at first believed that he was Capt. Hammond of the Royal British Flying corps, who was expected from Indianapolis. By the aid of glasses, however, Capt. Lipsner identified the speck in the air as the first aerial mail plane from New York.

Miller, who had never made a landing in Chicago, circled the park several times and made a perfect descent. As he was taken from the grounds in an automobile he was cheered by the crowds lining the field and by the people who packed the Monroe street viaduct.

Other features of the day at the exposition were addresses by Edouard de Billy, deputy high commissioner of the French republic; A. Bathelemy, French consul to Chicago; and Prof Shailer Mathews. 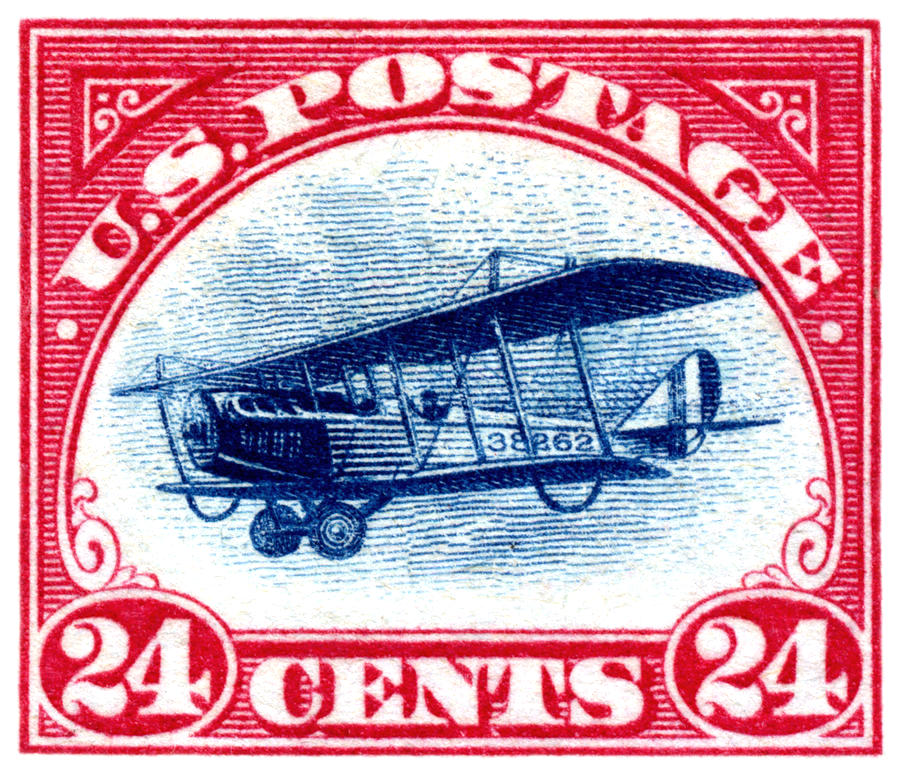 The 1918 Curtiss Jenny Air Mail Stamps were a set of three Airmail postage stamps issued by the United States in May, 1918. The 24¢ variety was the first of the stamps to be issued, and was in fact, America’s first Airmail stamp. The world’s first airmail stamp was issued by Italy in 1917. The 16¢ and 6¢ varieties were issued later in the year to reflect reductions in the postage rate. It features the image of the Curtiss JN-4 airplane, the same plane that Max Miller flew in his historic flight. A printing error on the two-color 24¢ stamp resulted in a sheet of 100 stamps with the airplane inverted.