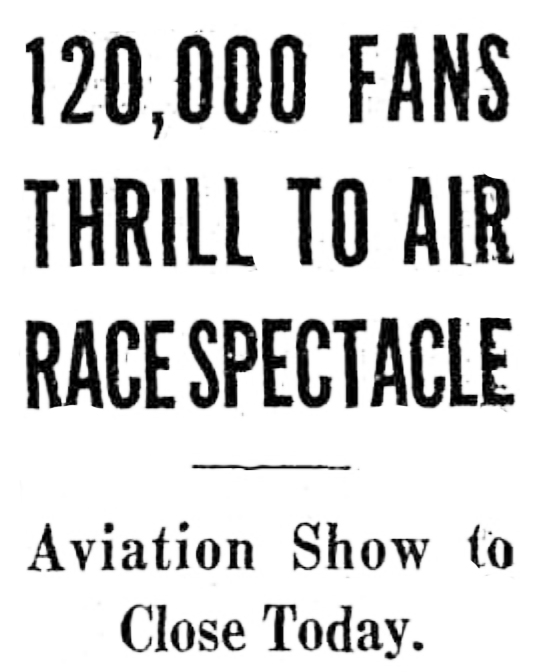 The Tribune’s American Air Races at Chicago airport (Midway Airport today) were attended by more than 60,000 persons yesterday. Air race officials said 40,000 persons were seated in the stands and another 20,000 were standing in the racing plant area. They also estimated that 60,000 more viewed the races, stunt flying, and military plays from outside vantage points, making a total of 120,000 who saw the show.

Maj. R. W. Schroeder, director of events, who conducted other air racing meets held in Chicago in previous years said the crowd at the races was the largest he had ever seen at an air racing meet. Despite the overcrowded conditions, the heavy program of events was run without a hitch and without an accident, air liners flying in and out of the airport on their crosscountry trips while the race program was in progress.

Tries to Break Record.
Lewis A. (Lon) Yancey, who flew to Rome in 1930, made an attempt to break the world’s altitude record in his autogyro, “Miss Champion.” Yancey set the present record of 21,500 feet at Boston last fall. He said his altimeter registered only 19,500 feet and that he believed he did not break his record yesterday, but would not know until the sealed barograph he carried has been calibrated.

Frank Hawks, famous speed flyer, was held up at Los Angeles by bad weather and was unable to take off in an effort to break Wiley Post’s speed record for a non-stop flight to Chicago, of nine hours, nine minutes, and four seconds. He may attempt the record flight today, according to dispatchers.

Igor Sikorsky, designer of amphibian planes, who is now building the first of a series of giant planes that will carry passengers and mail across the Atlantic, was delayed in the east because of weather. He will arrive at the American Air Races this afternoon between 4 and 5 o’clock, he telegraphed to race officials.

A view at the Chicago Municipal airport yesterday over the top of the grandstand showing the thousands of cars parked in vacant areas and air race spectators as they viewed the events from cars, buildings and other places. The vast turnout was rewarded by a series of air thrillers including races, stunt flying and military demonstrations. Another large crowds expected today when the final program of the air meet is given.

Perfect Weather for Races.
Despite bad weather in other parts of the country it was a perfect sunny day at the airport, perfect weather for the high speed events. It was the third day of the American Air Races, which end today with a final burst of high speed racing, aerobatics, military displays and comedy acts.

Douglas Davis of Atlanta, Ga., the first civilian pilot to defeat army and navy pilots in 1929, won the feature race of the day, an event for planes with motors of unlimited cubic inch displacement. Davis flew his Wright powered Travelair speedwing racer at an average speed of 146.06 miles an hour to defeat Jack Wright, sportsman pilot of Utica N. Y., by an average of less than one mile an hour for the twenty-five miles. Wright flew a Livingston monocoupe racer (Wardner motor).

E. M. (Matty) Laird of Chicago took third place, with an average speed of 135.45 miles an hour, in his Ranger powered racer. Art Davis was fourth in his Taper wing Waco and L. G. Lanson of Wichita was fifth in a Beechcraft (Wright motor).

View of part of the grandstands at the airport yesterday during the July 4th program of the American Air races, which are sponsored by the Tribune. About 40,000 of the spectators were in the seats, while another 20,000 were standing in the racing plant area. Outside the field were an estimated 60,000 persons viewing the program from many points of vantage. Veteran officials of air meets said that yesterday’s crowd was the largest they had ever seen at such an tvent. On the program today will be several prize races, parachute thrillers and an anti-aircraft battle with a bombing plane and three scout planes.

A Thrilling Spectacle.
The race, which was for the Turf trophy, and $1,300 in prizes, was a thrilling spectacle as the six heavy planes wheeled around the home pylon, their powerful motors roaring.

It was no more thrilling, however, than the closely fought contest for the Aero Digest trophy and $5,000 in prizes, which was won by John Livingston of Aurora, at an average speed of 204,54 miles an hour for the seven laps of the five mile course. Livingston took first prize money of $2,250, making his winnings for the air racing meet $4,500.

Joe Jacobson of Kansas City, Mo., won the Edelweiss trophy and first prize money of $675 in his Howard racer Pete, powered by a Gypsy motor, at an average speed of 155.4 miles an hour, defeating Harvey Mummert of Hammondsport, N. Y., flying a Mercury racer (Cirrus motor), who took second place money of $375.

Flies 213 Miles an Hour.
The races themselves were thrilling, but the lucid description of them, lap by lap, as given by Cy Caldwell of the Aero Digest magazine over a public address system, made them even more thrilling to the thousands of spectators. He remarked that Livingston, in winning the Aero Digest trophy, flew the fifth lap at a speed of 213.4 miles an hour, the fastest lap speed during the meet. 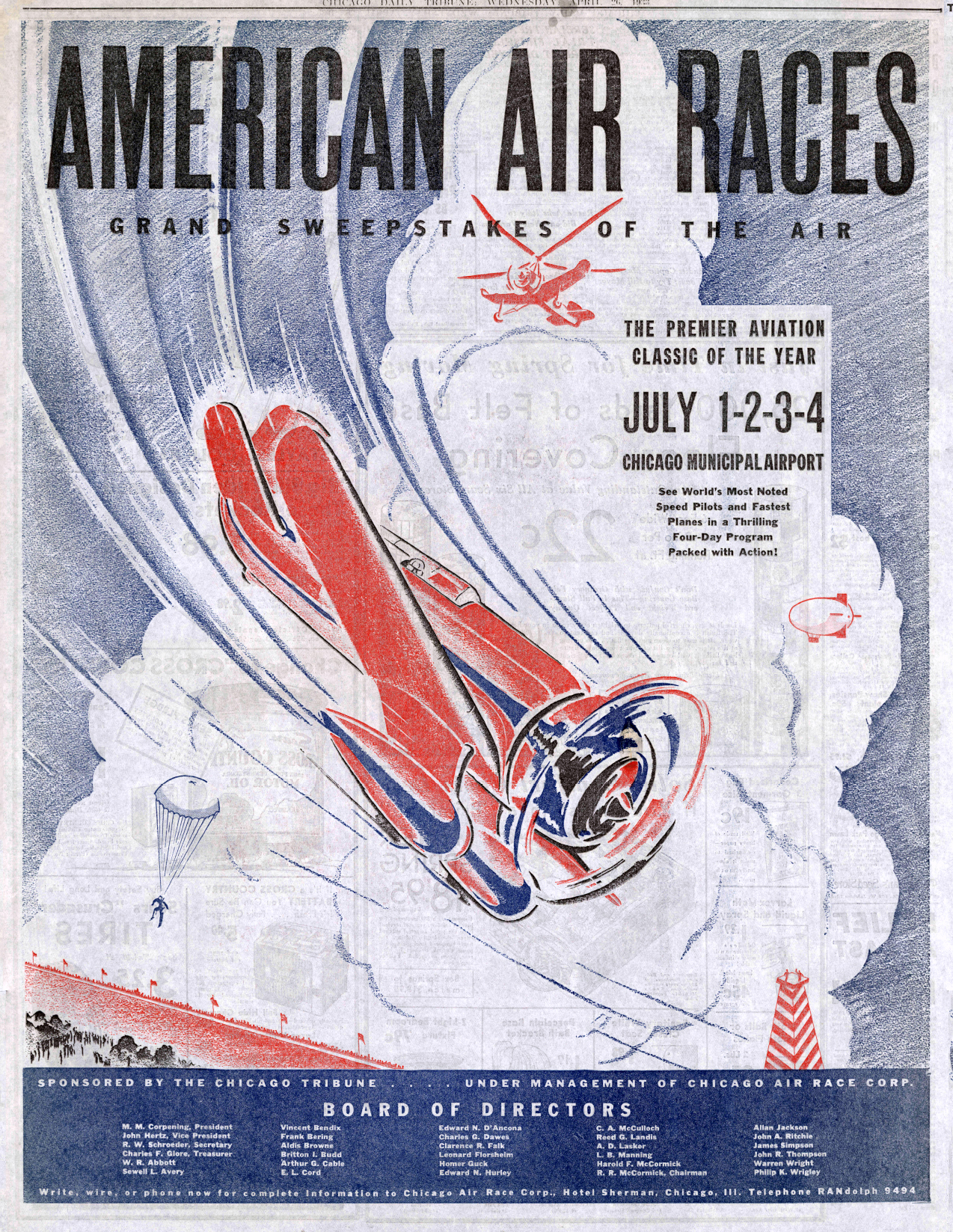 Advertisement for the American Air Races, sponsored by the Chicago Tribune
April 22, 1933

Photographs by William A. Prescott 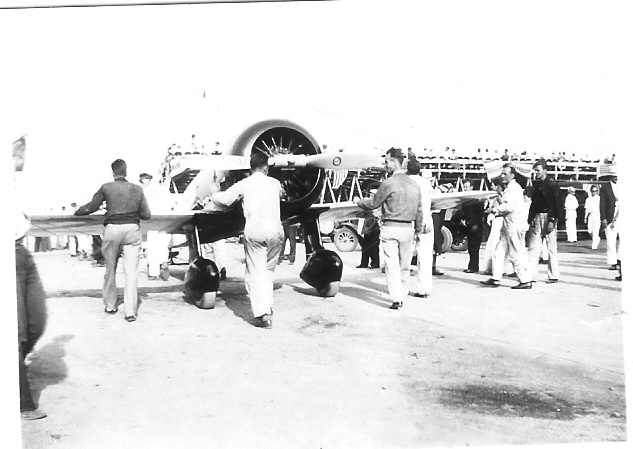 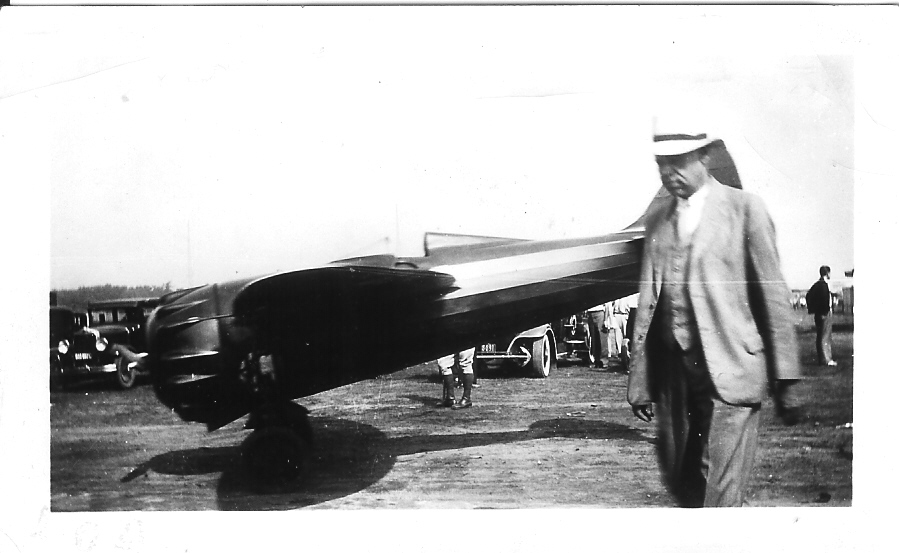 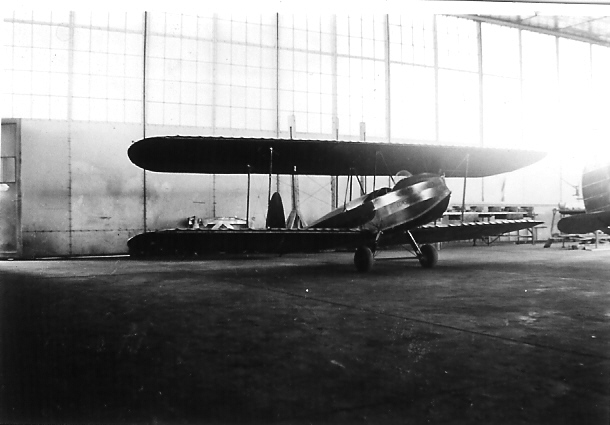 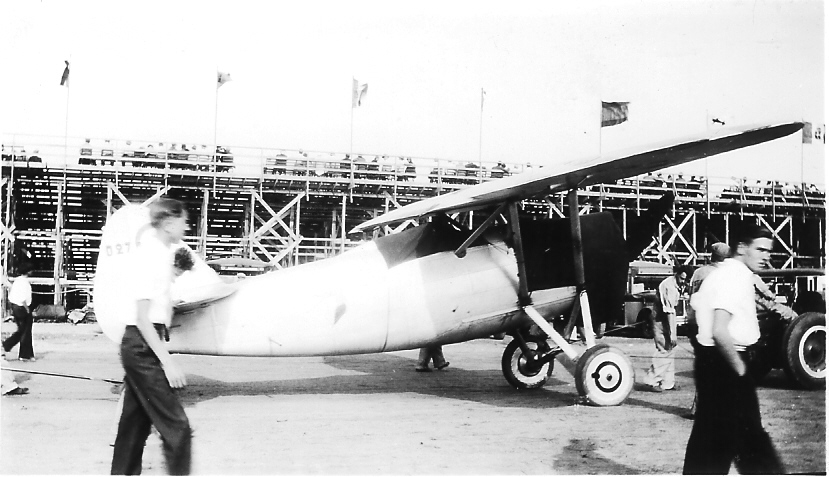