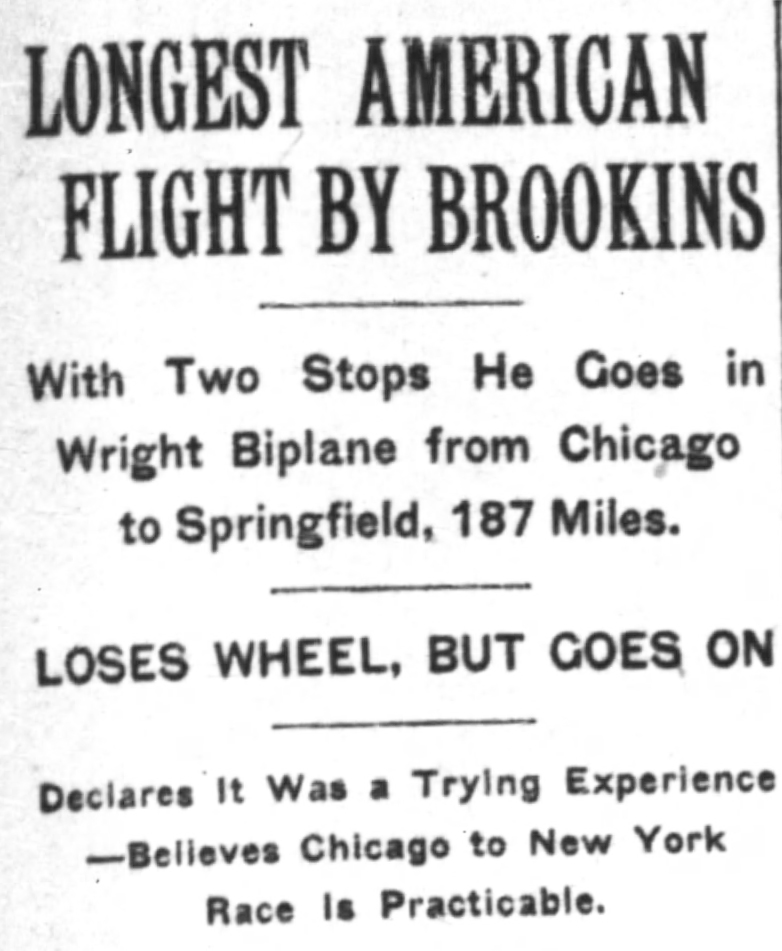 BY WALTER S. BROOKINS.
To the Editor of The New York Times:

SPRINGFIELD, Ill., Sept. 29, 1910
I had a most successful passage from Chicago to Springfield, though I would not care to repeat it again for a time. I had never before been in the air over an hour at a time, and this trip of nearly 200 miles was very trying on both body and nervous system.

I was under a great strain, though my biplane worked fine. At one time I was nearly paralyzed in the arms, and had to use my knees to assist me. The propeller worked nicely, and I was only compelled to descend to the ground because my supply of gasoline was giving out and needed replenishing. The distance, after deducting stops, was made in five hours and forty minutes.

I was unable to hear any sounds from the earth, not even the whistling of the locomotive of the Illinois Central train which was running with me, as I kept at a high altitude owing to the current of air in which I was traveling.

I consider from the light of my experience to-day that The New York Times-Chicago Post race between Chicago and New York next week is perfectly feasible.

Special to The New York Times.
SPRINGFIELD, Ill., Sept. 29—In the teeth of a wind blowing more than ten miles an hour, Walter S. Brookins in a Wright biplane flew to-day from Chicago to the State Fair Grounds outside this city. He alighted twice, by arrangement, once to make connections with a train which followed him and the other time because the gasoline pump of his engine was out of order. His feat, however, is called a continued flight, and for this and because he made a new American record for sustained flight he wins a prize of $10,000 offered by The Chicago Record-Herald. 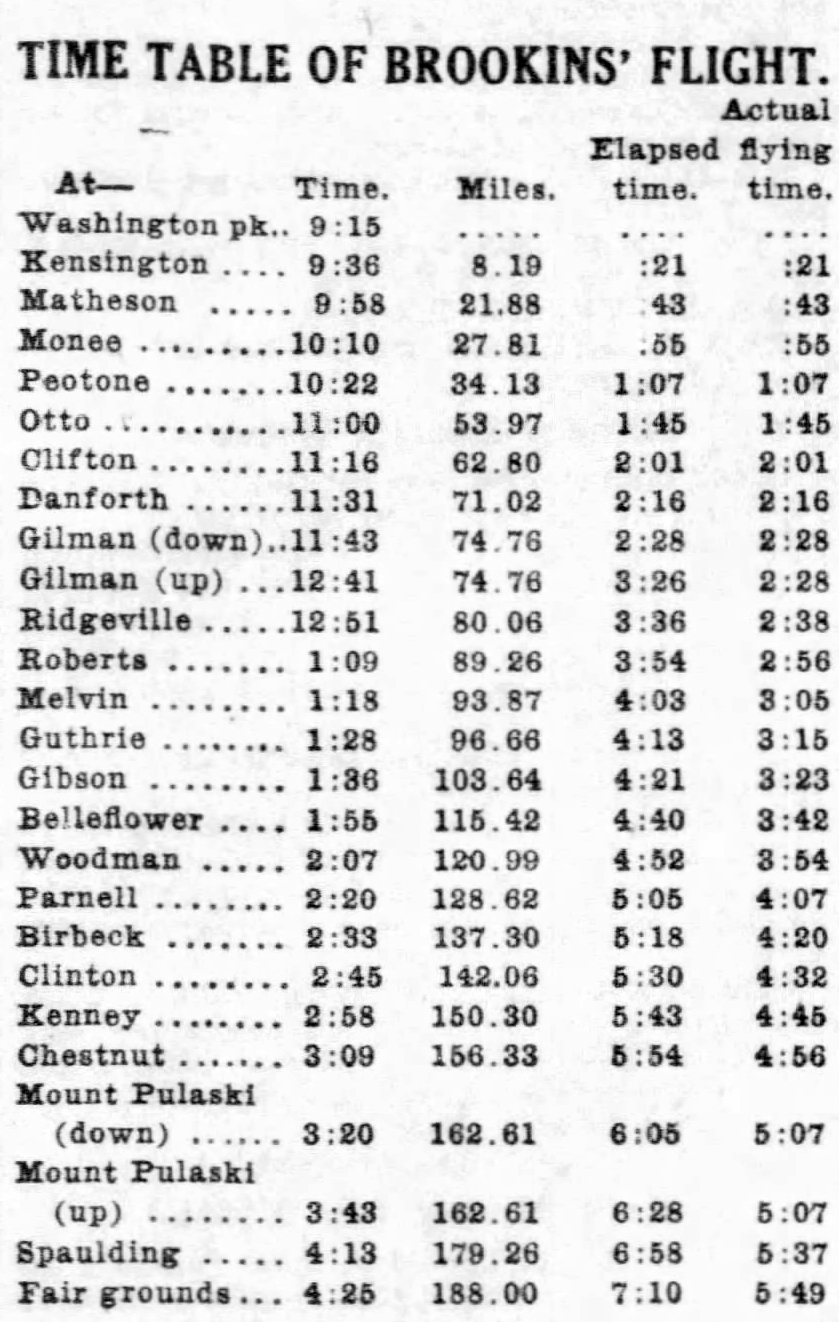 Wilbur Wright, one of the bother inventors of the biplane, who followed the pupil’s flight in the Illinois Central special train.

Brookins, at the end of his flight, declared that he was weary from the strain of fighting the wind all the way, but he could have gone on further, and, furthermore, he could make a similar flight again tomorrow. It has been remarked on all sides that his feat shows the practicability of the race from New York to Chicago, which is to start from Chicago on Oct. 8 for the $25,000 purse offered by The New York Times and Chicago Evening Post.

Details of the Great Flight.
The distance from the starting place in Chicago to Springfield as Brookins flew is 187 miles.

His start was made at 9:15 A. M. He stopped at Gilman, Ill., 75 miles from Chicago, at 11:30 A. M. After a wait there for oil and fuel he went on to Mount Pulaski, 88 miles further on, alighting at 2:20 P.M. After fixing his pump he went on to the Fair Grounds, 27.5 miles. He arrived above his landing place at 4:22 P.M., but had to circle about for three minutes before the crowd would give him room to alight safely.

By going 88 miles without alighting he broke the American record for sustained flight, made by Charles K. Hamilton, who set the mark of 86 miles in The New York Times flight from New York to Philadelphia and back on June 13 last.

The aviator flew for the most part at an elevation of 800 to 1,000 feet, but occasionally dropped lower or mounted higher to fly in beter air currents. The movements of the biplane at all times seemed to be in perfect response to the operator’s will, and the only spectacular dips and curves of the trip were seen in his landing and starting. The behavior of the machine was perfect so far as the watchers could tell. The motor’s chug sounded as regular as the ticking of a clock. 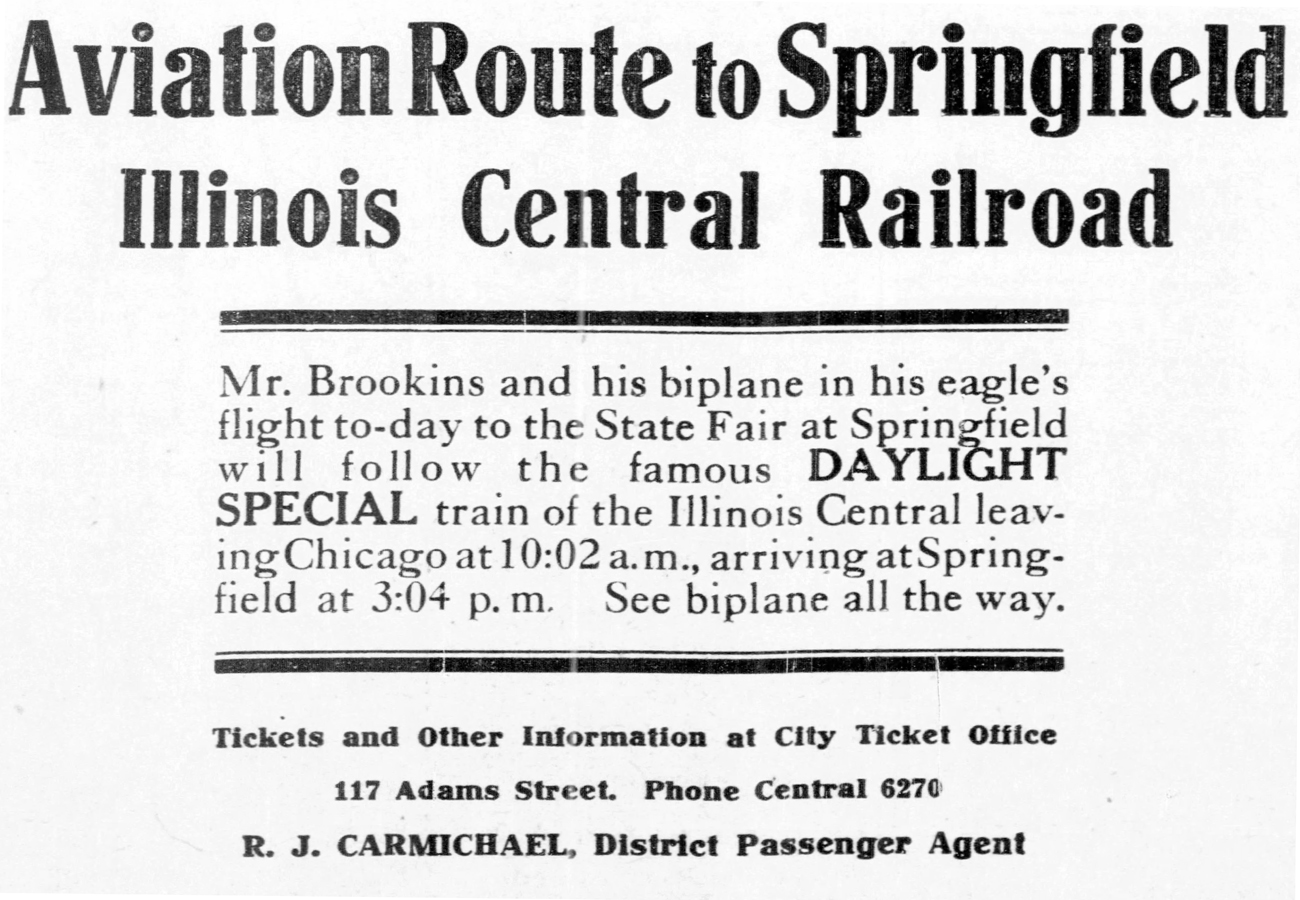 Alighted in a Cornfield.
In the entire flight Brookins made a single miscalculation. His single mistake occurred when he landed in a cornfield instead of in a grass covered field as he believed at Gilman, where he was to await the train.

It was explained later by Wilbur Wright that the aviator was wearing goggles which were not quite clear. A wind has flattened the green corn stalks and from the machine they presented the appearance of grass. When within a few yards of the ground the aviator discovered his mistake, but thought he could drop into the cornfield easier than he could change the direction of his machine for upward flight. He dropped among the heavy stalks without a mishap and scores of men helped him pull the machine twenty rods across a fence into a pasture.

When the train came up, half an hour later, Brookins called to the passengers, “How am I making it? I have been here more than an hour, it seems to me. Where are the rest of the fellows, with my oil and gasoline?”

After these necessaries had been provided Brookins conversed a few minutes with the newspaper reporters, and said:

Well, I must get away if I am to have luncheon with you at Springfield.

At Mount Pulaski he showed no more concern. Here he worked over his pump and got it in order again. The train came up, and Wilbur Wright also looked over the engine and gave instructions to the aviator. As Brookins swept out of the field for his last leg one of the small rubber-tired wheels underneath struck a hummock and was wrenched off. Brookins, not knowing of the accident, rose 2,000 feet and, heading for Springfield, swirled away. 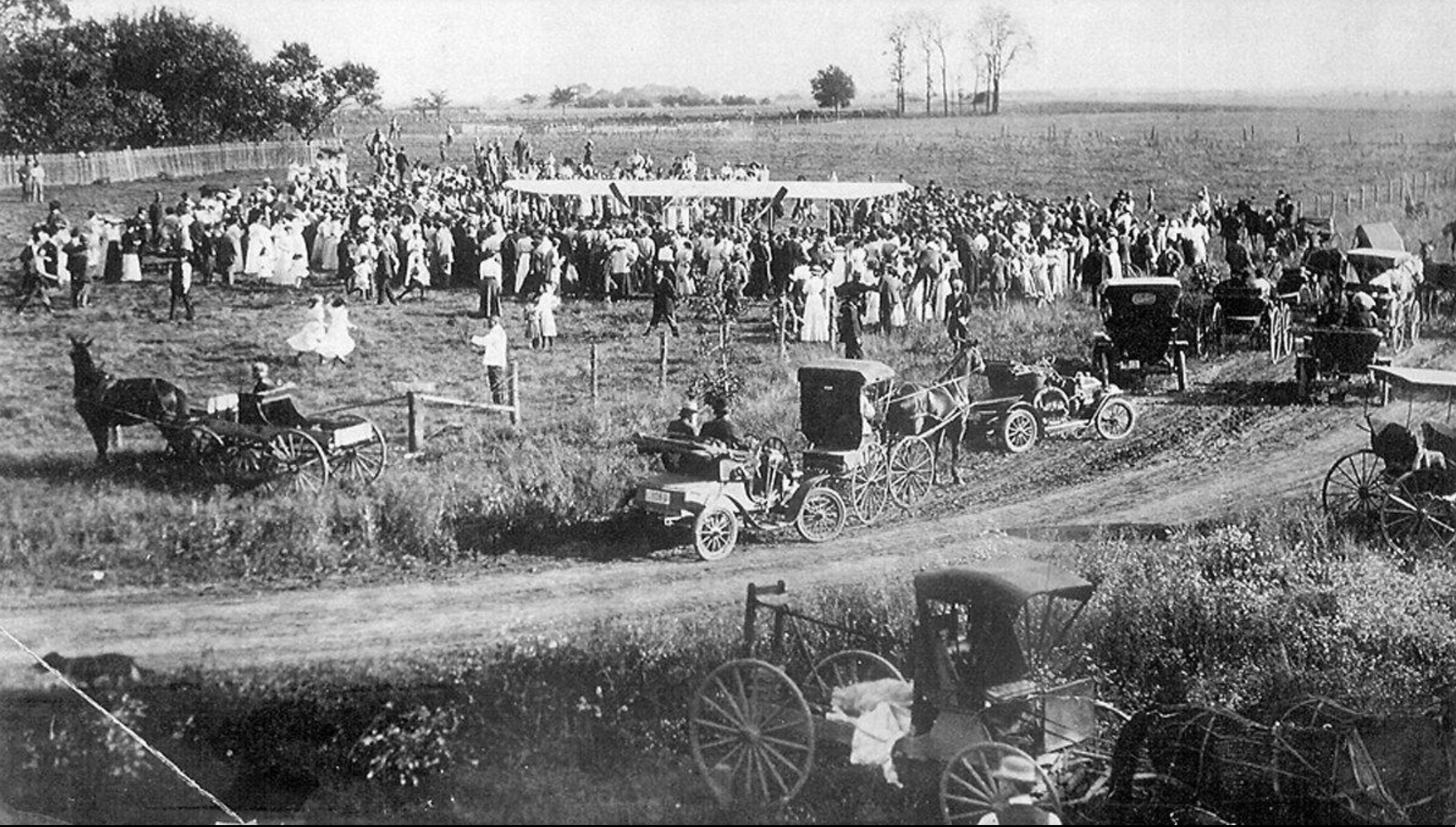 Brookins biplane at Mount Pulaski. It was reported that the train went through Mount Pulaski while the plane was still on the ground.

Crowd at Fair Troubles Him.
He was twenty-four miles from the Capitol, whose dome he saw when rose high. Ignoring Wilbur Wright’s instructions to fly only half an hour more because of the pump, Brookins aimed for the dome of the main building in the Fair Grounds. The propellors whirred true, and he soared to the Fair Grounds with no sign of further trouble. He went about 2,000 feet up, until ready to make the daring swoops and curves with which he landed safely in the Fair Grounds. He found some difficulty in alighting because of the inadequate police provision.

Forty thousand people were on the grounds, and in their enthusiasm they broke police lines and scattered over half of the parkway prepared for the aviator’s landing place. As he alighted finally after five minutes of circling the thousands yelled, and with a rush that swept a cordon of police off their feet men, women, and children crushed about the machine.

The aviator slipped from his seat and half staggered on his benumbed legs. His hands were shaking and his first words told of the fearful nervous strain he had been under.

The strain was fierce. I had a head wind all the way and the machine always sinking. It’s the worst trip I ever tackled. But let me out of this wild crowd. They wouldn’t hardly give me room to light in and now I can’t get out for the mob of people.

The crowd then gave him some room and kept away from the machine. When those who had been on the train reached the field, nearly half an hour after the aviator landed, he said:

Where have you been all the time? I got here and have been waiting to lunch with you, as I promised. You kept me waiting half an hour. 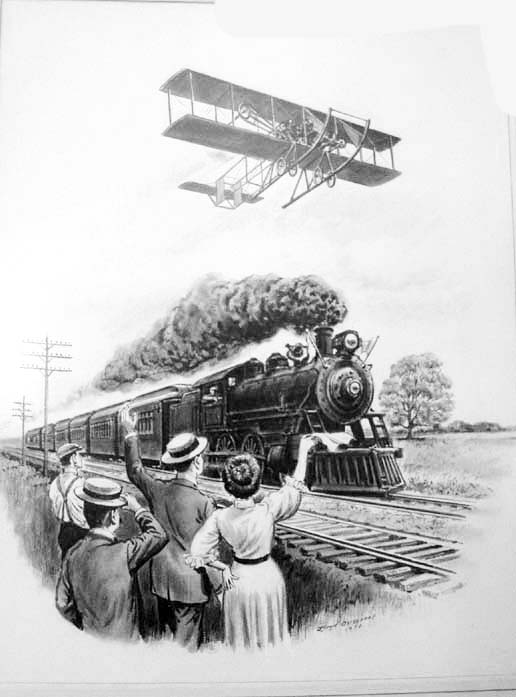 His Race with a Train.
It was an Illinois Central passenger train, with a special car for the reporters and other that followed the flight. It came up with Brookins at Gilman, and thence all the way to Springfield the train and the air craft were in sight of each other. The locomotive was able to make the better time, but the regular station stops gave Brookins opportunity to dash ahead.

Occasionally the airship drew away until the watchers could see only a speck in the sky far to the southward. At Mount Pulaski Brookins left the railroad route and struck out across country for the Fair Grounds. He alighted ten minutes before the train crew, up at the Springfield station.

By far the most interested man aboard the train was Wilbur Wright, and he was by all odds the calmest until the final lap of the flight. A dry smile and a short “Pretty good” were his quota of praise, while throngs of citizens were shouting themselves hoarse. He watched his pupil rise at Mount Pulaski and saw the wheel and declared its loss made no difference, but after that he showed marked nervousness. His strong fingers were clasped and unclasped and his eyes were glued against the car window the greater part of the time.

“I wonder if he’ll stop again,” he remarked when twelve miles out of Springfield. “I wonder if he’ll stop or try to make it through. He’s a good driver; Brookins is a fine driver; only been in the business since April. What’s that, a head? You bet, he has a lead on him, and that’s what counts in this business. See, he’s flying high—higher than any time during the trip. I guess he’s going to try to make it through without another stop.” 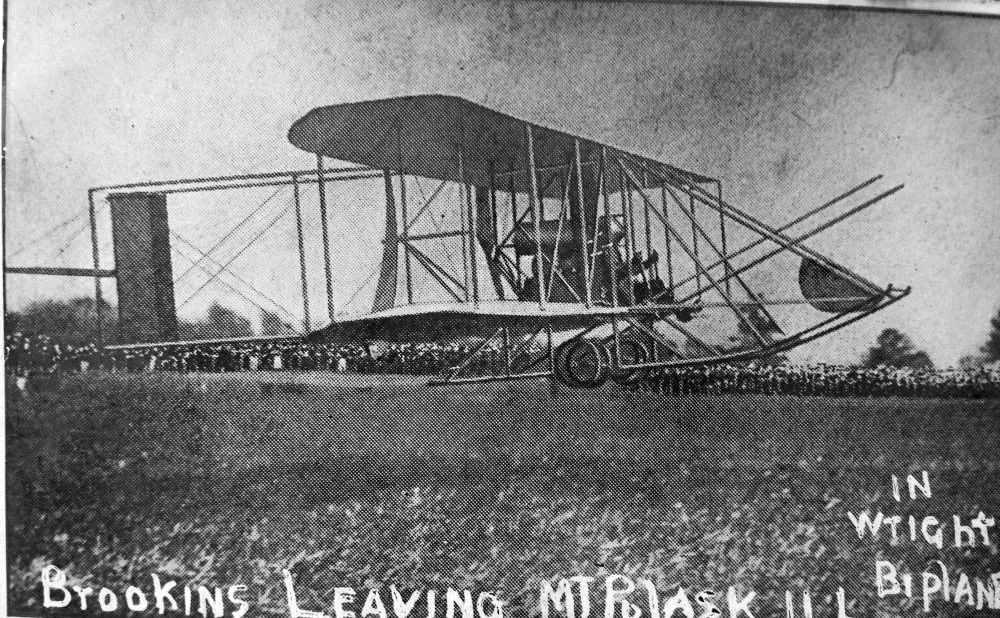 As the train neared Springfield the biplane could be seen a white shadow far up in the sky.

“He’s all right now,” said Wright. “Even if his engine should fail him now he could glide down into the fair grounds. He must be up 2,000 or 2,500 feet. I wonder why he doesn’t drop down a bit. He’s flying mighty high, There, he’s dropping a little, but not much. Now he’s going down faster. He’ll make it all right unless the loss of the starting wheel bothers him. Now he’s dropping fast. He’s just as good as finished the trip.”

The yound aviator had a continuous ovation from the watching crowds along the way. At every hamlet crowds were gathered from miles about to watch the biplane pass.

Wright Thinks Big Race Feasible.
Wilbur Wright, before departing from Dayton, Ohio, his home, expressed his belief that The New York Times-Chicago Evening Post race between Chicago and New York was feasible, though he said none of the Wright machines would be in the race as they were engaged in St. Louis.

“There isn’t much to say,” he replied when asked about Brookins’s feat. “Brookins made the distance as we believed he would from the start. The way to do these things is to act and not talk about them. Our biplane dis the work. I don’t know much about the records of these things except that I’m certain that this is the longest flight made, between sunup and sundown. Curtiss made two stops on his Albany-New York trip and Brookins made two to-day.

“Brookins could have beaten the time ten miles an hour if he hadn’t had wind blowing at that rate to contend with. As it was, he kept increasing his speed from the time he started to finish of the run. The engine throughout the trip was doing almost its maximum work.

“It was a broken pump, heating up his engine that made it necessary for him to alight at Mount Pulaski. Otherwise he would have gone the whole distance to Springfield from Gilman. The machine will go for any distance; the only difference between this and a practice flight is that the operator has to work longer. I think this has shown conclusively that the aeroplane is a successful navigator of the air.” 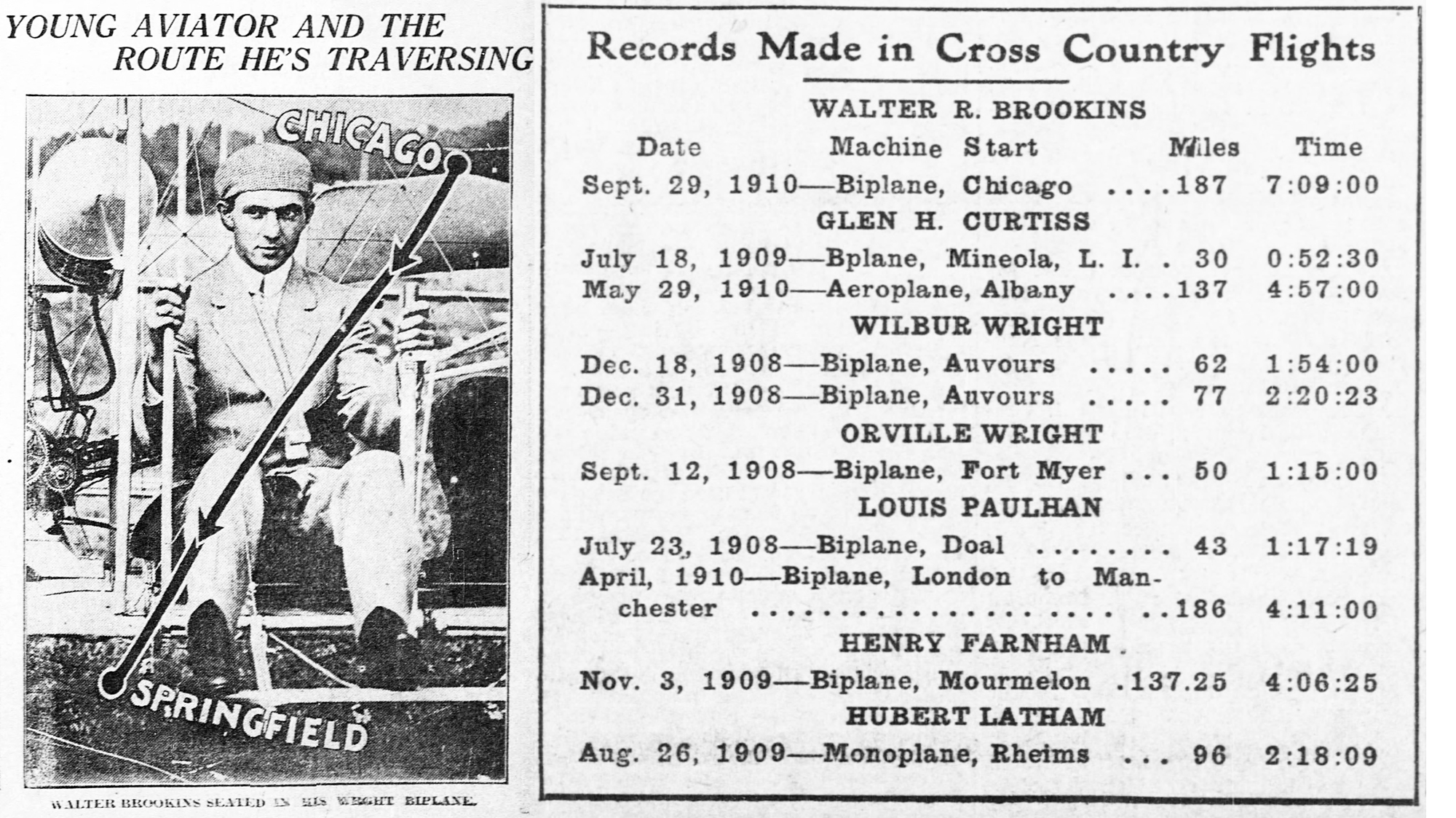